An unpredictable game deservedly went to Cagliari who, after an unfortunate first half, found their craft just in time to overcome a two-goal Sampdoria lead. Cagliari’s resurgence emerged from Sampdoria’s inability to maintain the level of defensive intensity and concentration that contained their opponent in the first hour.

Cagliari’s impressive start to the season has seen them flying in the league’s high altitudes, causing turbulence in the ranking’s first class. Sitting in fifth place with a game in hand, facing a struggling Sampdoria side provided Rolando Maran’s men with a chance to follow the same wind direction as Roma, three points ahead, while looking to establish their ascent amongst Serie A’s elite.

Guided by captain Radja Nainggolan and crew members Robin Olsen, João Pedro, Nahitan Nández and Luca Cigarini, Cagliari are reaching new heights. In this light, the unavailability of the goalkeeper and the Uruguayan midfielder from the start came as significant misses. Rafael and Marko Rog joined the 4-3-2-1 formation instead.

In contrast with their opponents, Sampdoria have not had the best of starts to their campaign, especially considering their stable heritage passed on from Marco Giampaolo to Eusebio di Francesco. The former Roma manager was soon sacked, seeing Claudio Ranieri take over in an attempt to dock the sinking ship at the nearest strip of land.

Sampdoria started in a 4-4-2 formation. Jakub Jankto and Gastón Ramírez carried the creative burden from the flanks, in support of the attacking duo composed of Fabio Quagliarella and Manolo Gabbiadini.

Cagliari unable to capitalize despite the upper hand

Shortly after Radja Nainggolan was rewarded for his performances with the ‘Cagliari player of the month’ award, the two sides kicked off.

After a first energetic spell from Sampdoria, Cagliari rapidly took control of the possession.

In a 4-3-1-2 shape, Sampdoria’s progression of the ball mainly consisted of direct passes into midfielder runs. These were achieved through the strikers’ drifting movements to the flanks, which opened the center for their teammate’s exploring of the box. Given the predictability of their play though, Cagliari’s 4-4-2 off the ball shape was not threatened until whipping cross from Ronaldo Vieira was met was Quagliarella’s overhead kick that forced Rafael into a miraculous save.

Sampdoria’s dysfunctionalities were on display without the ball as well, since Ranieri’s defensive guidelines instructed the players to regain their shape in a 4-3-1-2 low to medium block.

Thus, facilitated by a rather passive approach from the visitors, Cagliari’s midfielders could easily build the play by dropping deep to collect the ball. Once in the final third, The one-third of the pitch that is closest to the opposition’s goal. one attacker would join the possession to create an overload When one team has more players in a certain area or zone than the other team. and either open space centrally or out wide. During buildup, aided by the midfield trio that constantly rotated to provide new options and passing angles, Cagliari circulated from side to side in an attempt to open diagonal passing lanes. However, Sampdoria’s central compactness prevented them from doing so, which constrained Cagliari to the flanks, where, on the left side, Cagliari could combine effectively past the opposition’s lines. Luca Pellegrini constantly pushed up from left back, while João Pedro first roamed on the wing to lose his marker and subsequently make off the ball runs into the box as a shadow striker. 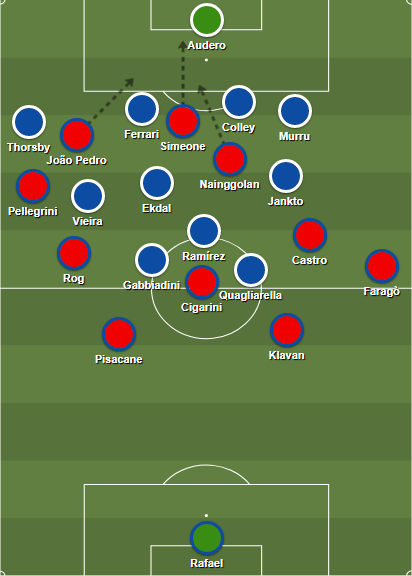 These off the ball runs are crucial to Cagliari, given the unpredictability they offer and the struggle teams encounter having to deal with the threat, as is illustrated by the Portuguese’s five non-penalty goals so far. No different was it on the day, when João Pedro’s runs completed the highest point of the offensive structure like a vertex.

While Cagliari did well to open the gates to their opponent’s box and threaten Audero’s goal with whipped crosses from the fullbacks, it was Sampdoria that dealt the first blow when Luca Pellegrini slipped and knocked Gabbiadini down in the penalty area. The referee immediately pointed to the penalty spot, from which Quagliarella did not fail to put his side in the lead.

One-nil down at the start of the second half, Cagliari needed to replicate the first half performance with some extra incisiveness in the final third due to many crosses not being met at the far-post or in the six-yard box.

Cagliari started the second half in the same dominant fashion they had ended the first. However, a Cagliari turnover suddenly gave Sampdoria a two-goal lead when a long-ball led to Ramírez’s goal. As Maran’s side’s attempts kept leading to a dead end since the fullbacks’ crosses lacked precision and repeatedly failed to find a teammate, the manager replaced Lucas Castro with Nández.

Immediately after the second goal, Ranieri’s team started defending more actively, increasing the pressure on the ball carriers. Consequently, Luca Cigarini was forced to drop between the two center-backs to receive the ball, which also shaped Sampdoria’s formation into a 4-3-3 with the two strikers wide on the central defenders and the attacking midfielder in the middle marking the holding midfielder.

Although the first line posed an additional obstacle for Cagliari’s buildup, the midfield and defensive lines progressively dropped deeper, creating big distances between the first and second line. A demonstration of this came when Nainggolan was allowed to shoot and score from the edge of the box after the entire defense and midfield retreated in front of their goalkeeper.

As fatigue accumulated, Ranieri’s side became unable to shift quickly from one side to another, allowing Cagliari to cross freely. Just as the home side had reduced the deficit with their captain Nainggolan, who found the far corner with a low long range shot, Quagliarella scored a stunning volley after freeing himself on the far-post.

Nevertheless, the third Sampdoria goal did not prevent Cagliari from exploiting the issues slowly emerging in their oppoent’s defensive structure and four minutes laterPellegrini crossed a ball into the box that met João Pedro’s deflection to make it 2-3.

Before Sampdoria could even process the goal, two minutes later the Portuguese shadow-striker latched onto a cross coming from Nainggolan to equalize the score with a brace. By the time Cagliari had tied the game, their opponent’s shifting struggles had grown in unsustainable magnitude. This prevented the fullbacks and central midfielders from hampering Cagliari’s crosses, virtually surrendering to the hosts’ aerial assault.

As if two goals from the same attacking dynamic were not enough, in the 96th minute the substitute Alberto Cerri headed a cross from Luca Pellegrini in the back of the net, settling the game to a 4-3 score in favor of Maran’s Cagliari. 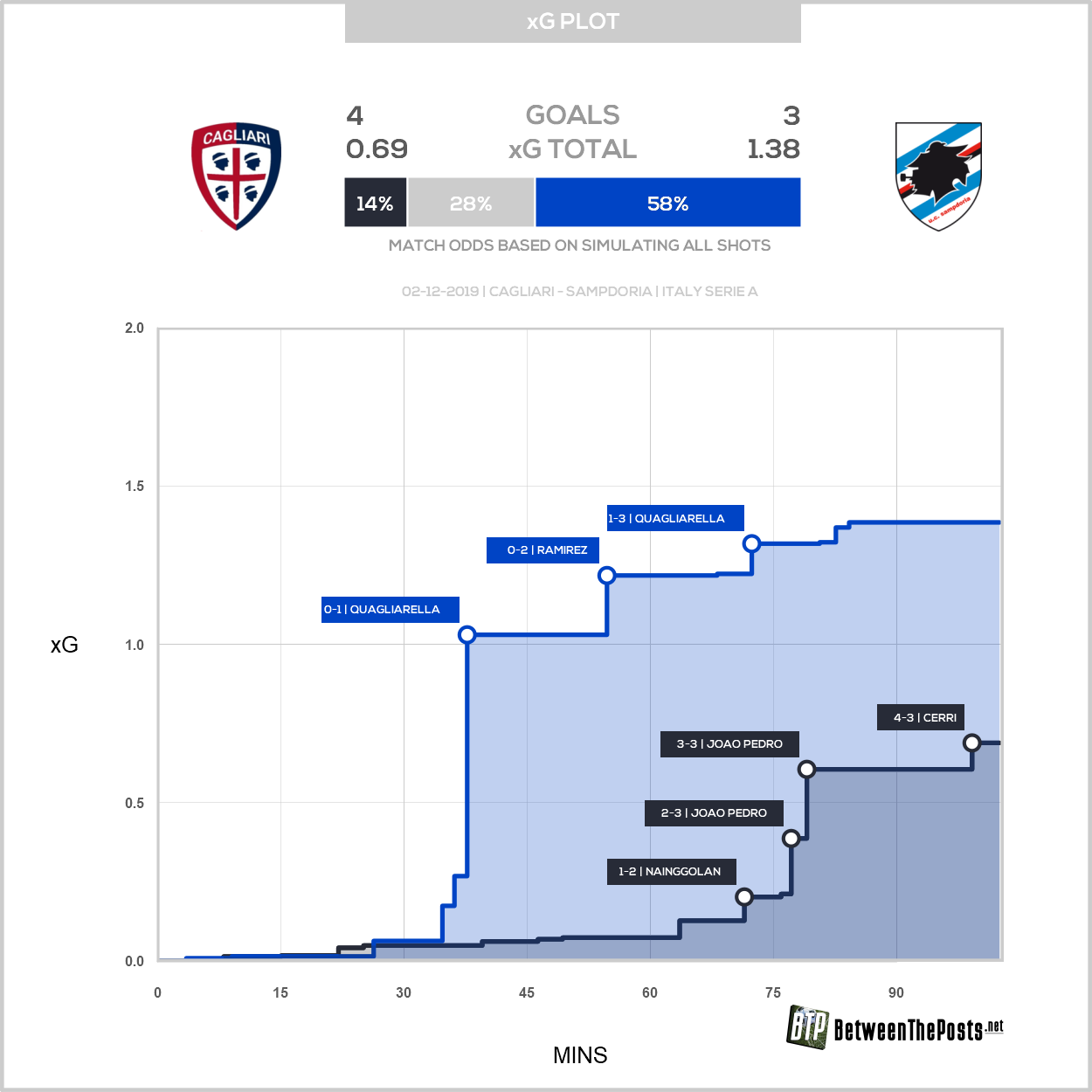 After going two goals down, Cagliari deservedly came back twice. Initially, Sampdoria had been able to exploit the space Maran’s men allowed on the counter. By involving so many players in the offensive play, the hosts often isolated the two center-backs and the pivot against the opposing attackers. The same scenario occurred when defending in a medium block, as the lack of pressure on the ball carrier exposed the defensive line to long balls, illustrated by Sampdoria’s second goal.

Despite evident defensive issues from Cagliari, though, the home side created the necessary conditions to not lose throughout the entire game, even if through an extremely monothematic strategy. All they needed was a slight drop in intensity from the visitors, which came in their support just as Sampdoria fans probably thought the two goal lead must have been enough to secure a vital victory. 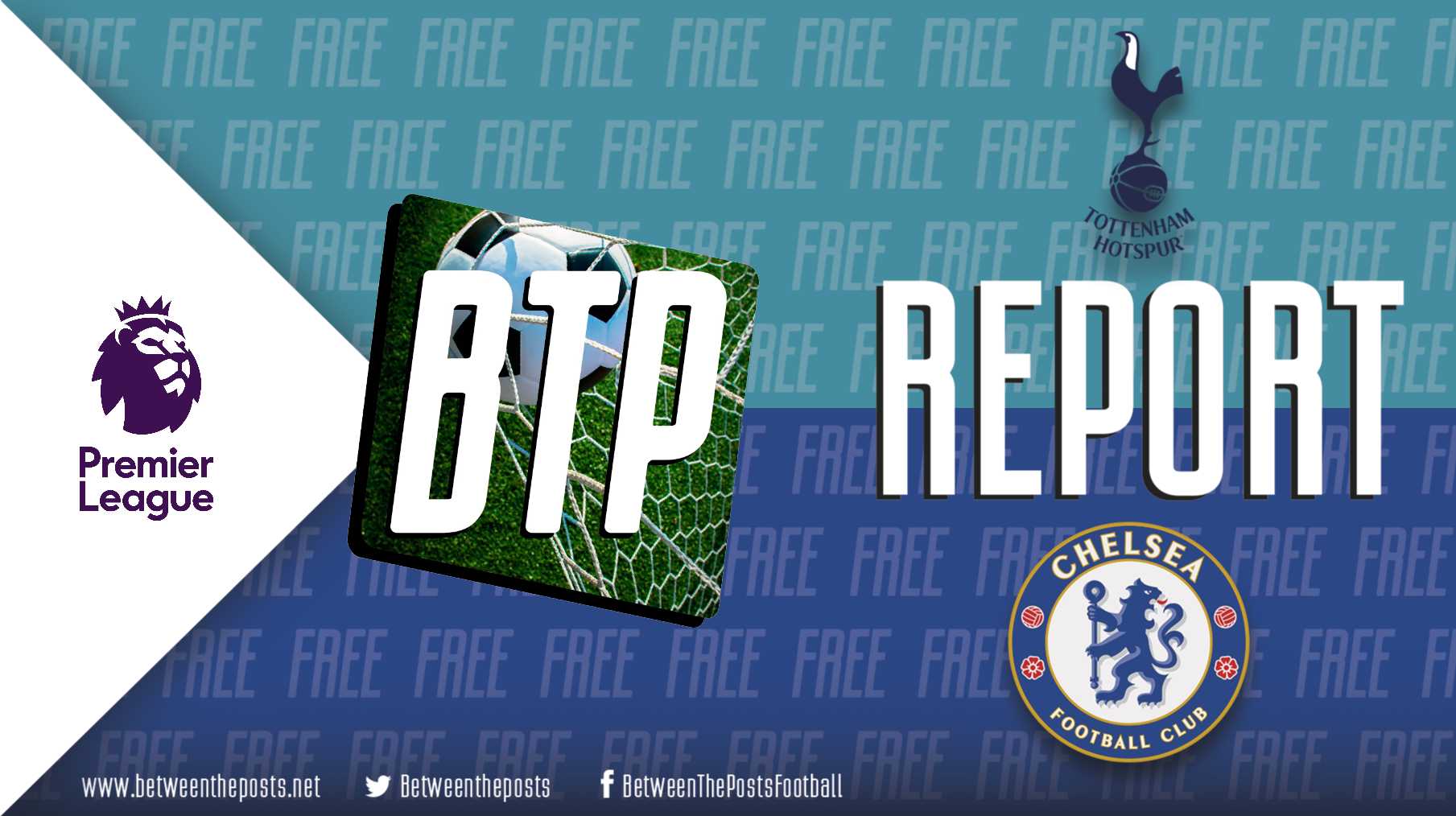