Celta de Vigo came out to play with one mission in mind – injure as many Real Madrid players as possible. Suffice to say, they succeeded, as Casemiro, Nacho, and Reguilón were all forced to come off hurt, making Madrid’s chaotic, hard-fought victory a pyrrhic one.

Though Real Madrid manager Santiago Solari has not had much time to impart his style on his team, some slight differences can be noted compared to how the team played and lined up under former boss Julen Lopetegui. One of those changes has come with the selection of the starting eleven – young fullbacks Sergio Reguilón and Álvaro Odriozola have been trusted to perform in Marcelo’s and Daniel Carvajal’s stead.

Solari, beginning with the last game against Viktoria Plzeň, has also experimented by playing Gareth Bale on the left-wing and Lucas Vázquez on the right, something that continued against Celta de Vigo. In fact, Solari’s only change from that Champions League night was to bench Ceballos for Luka Modrić.

While these lineup selections have played at least some part in Madrid’s turn of form over the last three games, Celta de Vigo, by contrast, have seen very little fortune come their way. Up until this point, manager Antonio Mohamed had only managed a single victory in his last nine games and had presided over an extremely leaky defense.

Desperate for a win, Mohamed approached the encounter against Real Madrid in his usual 4-4-2 formation. Technician Iago Aspas was paired with Maximiliano Gómez, ahead of the exact same midfield and defense that started against Real Betis.

Real Madrid started the game in bright fashion, as Karim Benzema combined with Odriozola down the right flank to produce a shot on target nearly instantly. Only minutes later, Benzema latched onto an excellent long throw-in from Bale to whip an effort just past the far post.

This classy bit of opening play was a sign of things to come and it looked like it had inspired every Real Madrid player on the pitch to take the game by the scruff of the neck. Celta had to get things under control quickly, which they tried to do by applying a wing-focused 4-4-2 high press. 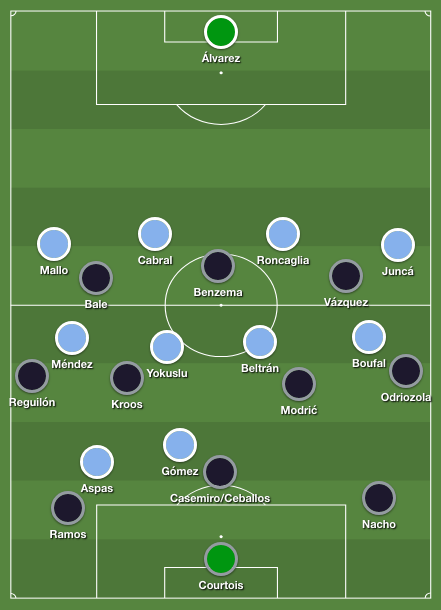 Since Madrid mainly built through their left, Aspas moved to press Sergio Ramos while Gómez shifted to protect the passing lane to the defensive midfielder. They were supported by man-to-man marking on central midfielders Toni Kroos and Luka Modrić, fullbacks Reguilón and Odriozola, and wingers Bale and Vázquez.

The press, undergirded by lots of energy and aggression, was fairly effective in the opening minutes, and Madrid struggled to cleanly progress the ball into the opposition half. Casemiro’s injury after eight minutes enlarged this problem, forcing Madrid to eventually go long and cede possession to Celta more often. Mohamed’s men could have certainly done more with their time on the ball, but they did manage to hit the post from a corner early in the first half.

Whether it was that close scare or Casemiro’s grimaces that prompted Solari to make the substitution, the Madrid manager clearly decided enough was enough and immediately subbed off the struggling Brazilian for Dani Ceballos. Surprisingly, the Spanish playmaker took up Casemiro’s position in defensive midfield.

A couple minutes later, Real finally enjoyed a spell of longer possession and they made it pay. Luka Modrić – off color all season – finally looked himself, as he lofted a beautiful pass in behind Celta’s defensive line. Benzema, who had faked a clever movement towards his midfield before spinning away and running towards goal, controlled the pass beautifully and finished one-on-one to put Madrid up.

The goal seemed to galvanize Madrid, and though the flow of the game remained predominantly the same for the rest of the half, they picked up two more quality opportunities thanks to crosses from Reguilón and Odriozola. Celta on the other hand remained largely inefficient in possession. Their only notable moments were the repeated nasty challenges on Madrid personnel.

Santiago Solari’s defensive organization – his main strength at Castilla – was a large reason for Celta’s inefficiency. He set his side up in a compact 4-1-4-1 medium block A medium block refers to a team that retreats in their own half out of possession, generally only disrupting their opponents some way into their own half. and got a lot of defensive energy from Gareth Bale. 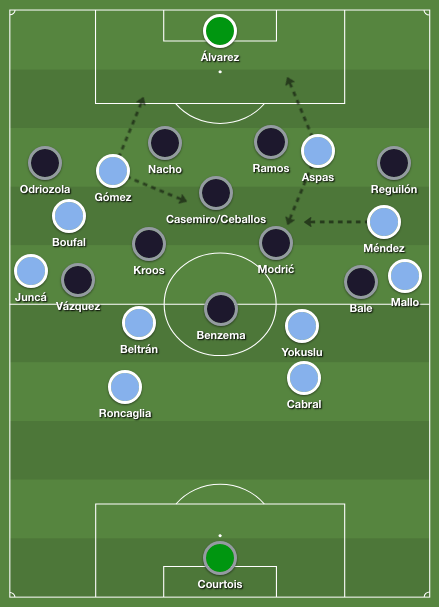 Celta de Vigo attacked this shape with a 4-4-2 or 4-2-2-2 formation in possession. Aspas and Gómez mainly sat on the shoulder of the defensive line – though they did occasionally move deeper – while right-winger Brais Méndez moved into the halfspace If you divide the field in five vertical lanes, the half spaces are the lanes that are not on the wing and not in the center. Because there is no touchline like on the wing, players have freedom to go everywhere. But this zone often is not as well-defended as the very center. This makes it a very valuable offensive zone to play in and a lot of chances are created by passes or dribbles from the halfspace. behind Modrić. Left winger Sofiane Boufal mirrored Méndez’s positioning from time-to-time but was often more comfortable closer to the touchline, where both of Celta’s fullbacks sat.

The presence of three Madrid central midfielders near the middle of the pitch made it difficult for Celta to immediately access anyone in the halfspace, meaning they had to rotate the ball out wide to get a better angle. Since Méndez was the one with the narrower positioning, Celta tried to do this down their right.

Bale, however, showed admirable defensive discipline and an impressive work rate to cut off the passing lane behind him and force possession backwards.

With few other progressive mechanisms to turn to, Celta resorted to route one football and dagger passes into the channels. This plan rarely succeeded thanks to Ramos and Nacho’s defensive ability and Aspas and Méndez’s poor form on the day. 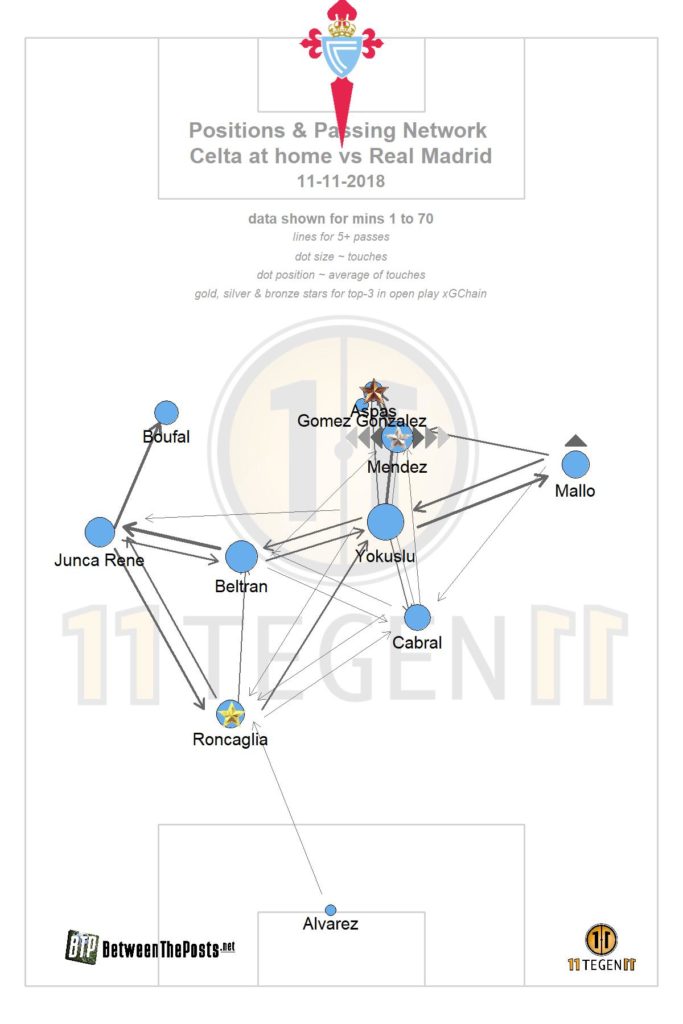 After an unimpressive first half, Celta de Vigo came out of the tunnel even more desperate for a win and decided that the counterattack would be their best chance at doing so. In the first half, Real Madrid had managed to avoid being caught out on the break thanks to Celta’s large spells of possession and a counterpress that allowed time for re-organization.

That same counterpress had not looked totally convincing in the first half, and it was well exploited once Celta became determined to flood players forward in transition. The alertness of the Madrid players to apply pressure immediately after losing possession was not enough to overcome their rather disconnected spacing, and Ceballos – not entirely fitting the profile of a defensive midfielder – could not protect the space behind Modrić and Kroos well enough.

Real Madrid had also been trying a high press on goal kicks in the first half and that too was exploited in the second. Again, while the energy was there, the lack of organization became apparent when Celta swiftly played the ball in a triangle down the flanks and switched play through midfield.

Benzema was once again the savior as Madrid struggled. He struck the crossbar and forced a save before causing an own goal that put Madrid up 2-0  – all thanks to his own individual brilliance.

Celta try but come up short

But Celta refused to give up and Madrid’s defensive organization finally fell completely by the wayside. At the half hour mark, Celta worked their way down the right flank and chipped a ball into the box. Ramos was caught sleeping and right back Hugo Mallo charged into the empty space and volleyed home an excellent strike to make it 2-1.

The game went completely berserk from then on. Reguilón, who had come off injured for center back Javi Sánchez in the 46th minute, was followed by Nacho for Marco Asensio in the 70th. Lucas Vázquez became the makeshift left back. The game was played out in an end-to-end affair, decided by fifty-fifty duels.

With that style suiting Celta better than Madrid, Modrić took control and won a physical battle off a goal kick to send Asensio on his way. After some combinations down the right, the ever-present Odriozola burst into the box and drew a penalty, which Ramos converted.

The game did not end quietly after that, as Ceballos scored a screamer in the dying embers of the match, only for Méndez to score a deflected effort to end the match at 4-2.

Solari’s style is fast becoming apparent. He is not afraid to trust youth, he likes swift, high-tempo play with traditional wingers who can provide lots of crosses. It seems like he is not too concerned with tactical structure in midfield though, and is not all that fond of pressing.

Antonio Mohamed also seemed to prefer a swift, high-tempo game today, but he did not get the same result as Solari. There is an argument that his side were somewhat unlucky, but their inefficiency in possession did not warrant them a win. Additionally, one must wonder how much better Madrid could have coped in the second half if they had all their limbs intact.