Real Madrid control the first half before Toni Kroos and co. save the team, having gone down a man due to a red card for Luka Modrić.

To say that Zinedine Zidane was under pressure coming into Real Madrid’s LaLiga opener in Estadio Balaídos would be an understatement. After a whirlwind of a summer – where Madrid made a multitude of signings yet disappointed in preseason – at least a quarter of the fanbase was already calling for Zidane’s head.

While such an attitude was definitely an overreaction, there was reason to be concerned. Real Madrid had been disappointing in their last two league campaigns, meaning that some of the issues seen in preseason were merely reflections of longer trends, such as defensive transition.

An issue that was always present in some form or the other since the departure of Carlo Ancelotti, as Zidane was never quite able to figure out how to balance the fluidity of his offense with a solid defensive structure once his team lost the ball. This problem reached its apex under Santiago Solari, when the post-peak and fatigued Luka Modrić and off-form Casemiro could no longer paper over the cracks.

Among the multitude of other challenges that come with managing Madrid, the need to create stronger collective defensive structures is arguably Zidane’s toughest. Fail to do so, and even the signing of Neymar may not be enough to prevent another fruitless season.

Celta de Vigo are another team that came off a very disappointing league campaign. They hung around the bottom of the table for the entire season and barely staved off relegation after hiring new head coach Fran Escribá in March. Unsurprisingly, the following transfer window led to a massive amount of turnover, with notable arrivals being Denis Suárez from FC Barcelona and Santi Mina from Valencia.

An opening fixture between two teams that had something to prove added just a little more edge to what has traditionally always been a feisty and competitive match-up. However, the strength of both teams’ potential elevens were weakened due to injuries.

Celta were without new signing Santi Mina, left back David Juncá, defensive midfielder Okay Yokuslu, and right back Hugo Mallo. Escribá reacted by lining his men up in a narrow 4-4-2 formation, with Denis Suárez and Brais Méndez as the attacking midfielders. The 32-year-old Iago Aspas led the line alongside strike-partner Gabriel Fernández.

Madrid opened the game rather tentatively, choosing to fire direct passes down the wings instead of sustaining possession against Celta’s 4-4-2 medium-high block. A medium block refers to a team that retreats in their own half out of possession, generally only disrupting their opponents some way into their own half. A high block refers to a team that regularly leaves their own half out of possession, to disrupt their opponents far into the attacking half. A medium-high block is well… in between these two variants. The distributive duties, in this tactical state, fell to fullbacks Marcelo and Odriozola, the former of whom was uncharacteristically inaccurate with his deliveries.

The combination of Zidane’s low-percentage strategy and Marcelo’s rustiness led to an uneventful first fifteen minutes. Madrid’s attacks constantly broke down and, whenever Celta tried to build out from the back, they panicked against Madrid’s high press. 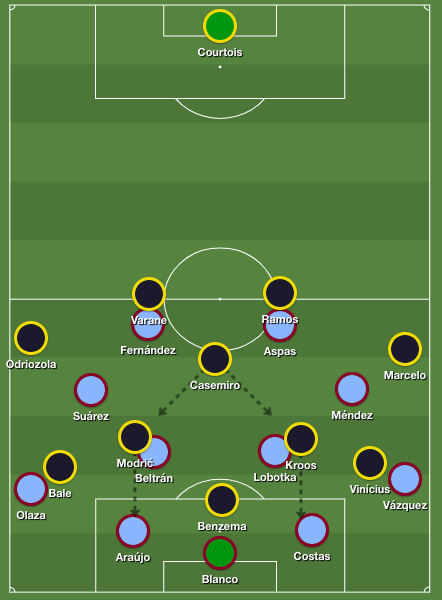 To be fair to Zidane, the pressing structure he had conceived was quite solid. It started from a 4-1-4-1 formation that quickly morphed into a 4-1-5 shape whenever Modrić or Kroos decided to trigger the press. The scheme is not as risky as it looks, given Modrić and Kroos’ elite cover shadowing abilities and high pressing work-rates and Casemiro’s ability to provide cover in their backs if needed.

Nevertheless, the positioning and decision-making of Vinícius and Bale were less than stellar – something that Celta might have been able to exploit had they not decided to clear the ball immediately upon seeing the press.

Celta’s fear resulted in control for Madrid, allowing the All Whites to finally orchestrate a breakthrough. After a blocked Marcelo pass, Casemiro, perhaps fortuitously, won a fifty-fifty duel, giving the aforementioned Marcelo another chance to get it right. He made no mistake the second time around and found a dashing Bale down the left-hand side of the pitch. The Welshman turned his marker inside out and flashed a ball across the six-yard box, permitting Benzema to make it 1-0 with the first shot of the game.

Proceedings revert to uneventfulness until the end of the second half

The goal seemed to inject some confidence into Madrid’s play, which finally saw them put together long spells of possession. Instead of simply launching the ball from the feet of Marcelo and Odriozola, Madrid looked to work the ball in triangles down the wings before switching play or trying to put in a cross.

But, as neat as it looked, Zidane’s men failed to create much until the last few minutes of the first half. Though this was partly down to Marcelo’s continued struggles with passing and Madrid’s somewhat predictable mode of buildup, a lot of it had to do with Celta’s high press (which began after Madrid scored their first goal). 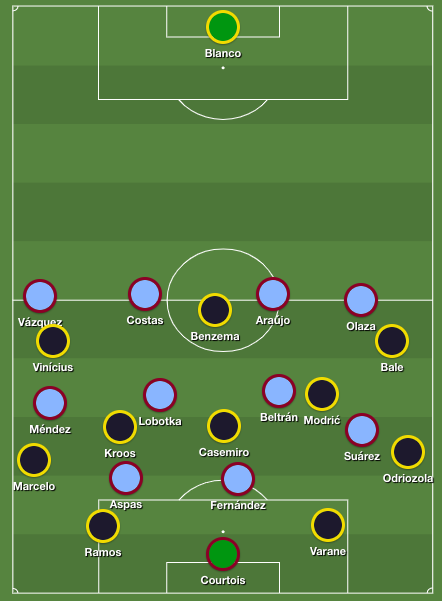 Having one midfielder less in the middle of the park, Escribá ordered his team to press in a wing-oriented stance. Thus, whenever Madrid passed the ball out wide, the ball side striker would close down the center-back while the far side striker would pinch inwards and cover Casemiro. The midfield and fullbacks would man-mark their assignments while central defenders Néstor Araújo and David Costas would shadow Benzema.

Madrid were not overly troubled by the press, yet lacked the sharpness and speed of thought to cut through it. As a result, Celta did enough to slow Madrid’s ball progression, thereby reducing the number of final third The one-third of the pitch that is closest to the opposition’s goal. entries available to the visitors.

Then, as the second half began to draw to a close, a flurry of chances appeared: Bale ran in behind and forced a corner kick with a strong effort; Benzema got his head to the resulting set-piece but was unable to finish it. Moments later, Odriozola was dispossessed thanks to Celta’s press and Méndez converted, seemingly scoring the equalizer. As Balaídos erupted, VAR intervened to correctly rule the goal out for offside. 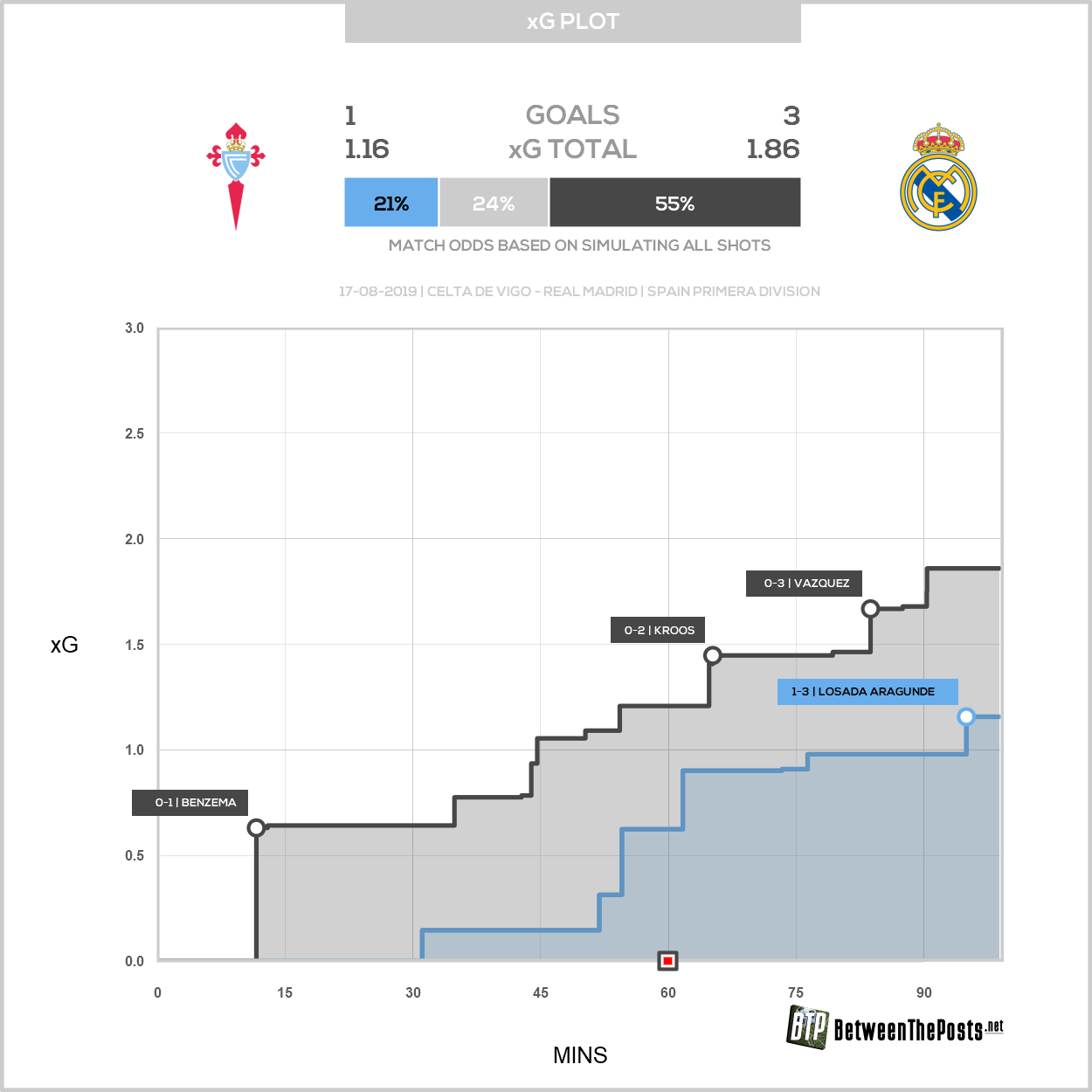 Celta look to be in the ascendancy

Perhaps motivated by what they perceived to be an unjust decision, Celta started the second half looking like a different team; they began to hold onto the ball against Madrid’s press, allowing Araújo and Costas to exploit Vinícius’ and Bale’s disorganization. By getting the ball wide, Celta’s fullbacks were then able to exploit the spaces behind Modrić and Kroos and progress into the opposition half.

Once Celta had forced Madrid back, the narrow roles of Suárez and Méndez began to have an effect. Because the two midfielders basically acted as two number tens, Marcelo and Odriozola were unable to follow them, creating a situation where Casemiro was outnumbered. To access the free man, Celta did what they did versus the press; they got possession to the fullbacks and played diagonal passes into the center. Following this action, Lucas Olaza or Kevin Vázquez would bomb upfield to receive a return pass or Aspas or Hernández would dart sideways to receive the ball. 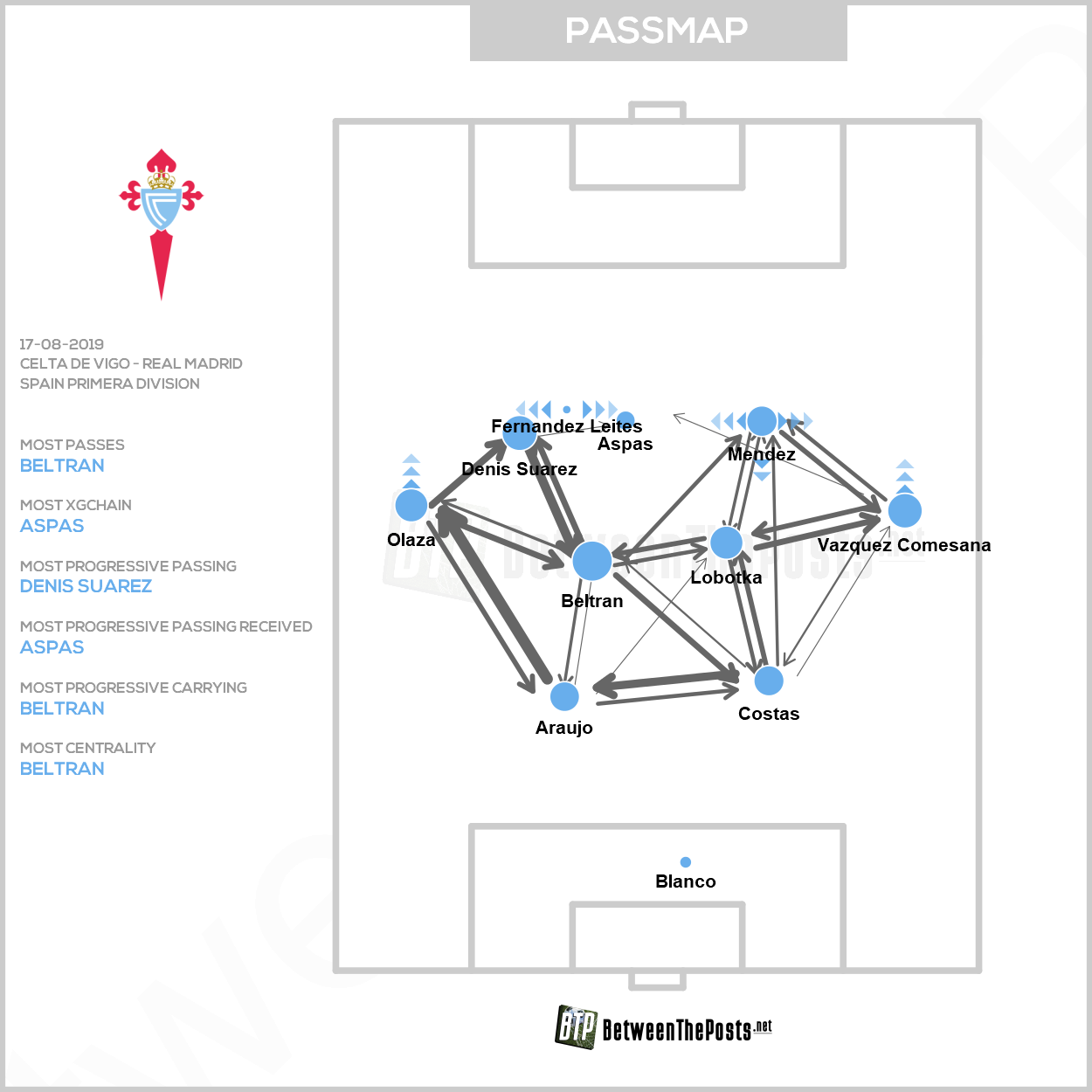 Celta’s confidence in building out from the back correlated with an increase in the effectiveness of their counterattacks, which was arguably more dangerous for Madrid given the oft-discussed issues with Zidane’s transition defense. This was best seen in the 50th minute, when Celta exploded on the break and coaxed Courtois out of his goal, forcing Casemiro to make a timely block.

To make matters worse for Los Blancos, Modrić was sent off in the midst of all of this for a poorly judged tackle on Suárez. VAR, again, made the potentially game-turning decision.

Following the sending off, Araújo found himself unmarked in the box after a set-piece routine. The open man quickly received a cross but could only direct his header straight at Courtois. It was a huge missed chance – Celta’s biggest of the game – and signaled the precarious position that Madrid were in.

Then, out of nowhere, Toni Kroos blasted a howitzer from distance that smashed off the crossbar and bounced over the line. Celta could barely believe their luck as Kroos stood stoically, surrounded by his adoring teammates.

Sent from one of my players out in Vigo. pic.twitter.com/idT1OaV0li

The goal had a clear mental effect, as Madrid actually held more possession from that point onwards that at any other period in the game. The fresh legs of Lucas Vázquez and Isco were soon introduced and, suddenly, Madrid were playing flowing, effortless football. To set up the best move of the night, Casemiro made an interception to obliterate a Celta counter and get Marcelo on the ball. The left back played a one-two with Isco before laying the ball off to Benzema in the box. The Frenchman did a neat pirouette around the defender and found the free Vázquez, who made no mistake one-versus-one with the keeper.

Feeling on top of the world, Madrid continued to push forward recklessly, allowing Celta to rush forward on the counterattack and score a consolation goal at the very end of the game.

It is far too early to extricate a lot of meaning from this game. While Real Madrid did prove that the preseason hysteria was overblown, this does not mean that their longstanding issues have suddenly vanished. There was a period in the second half where Madrid looked dangerously vulnerable and it took a Toni Kroos screamer to save them after Modrić made a rash decision. In fact, probably the only thing that can be taken away from this game is that Zidane has had to completely retract his stance on Bale.

It is hard to say that Celta Vigo played “well,” but there was certainly some promise in their approach. Once they managed to get their midfielders on the ball, the narrow positioning of Suárez and Méndez was very difficult to mark and the duo provided easy access into the final third. Iago Aspas, in particular, played off the attacking midfielders well and consistently made the right runs into the channels to provide a threat in-behind. However, like with Madrid, it is far too early to say if this will be enough to propel them to a memorable season.

All match plots are presented below. 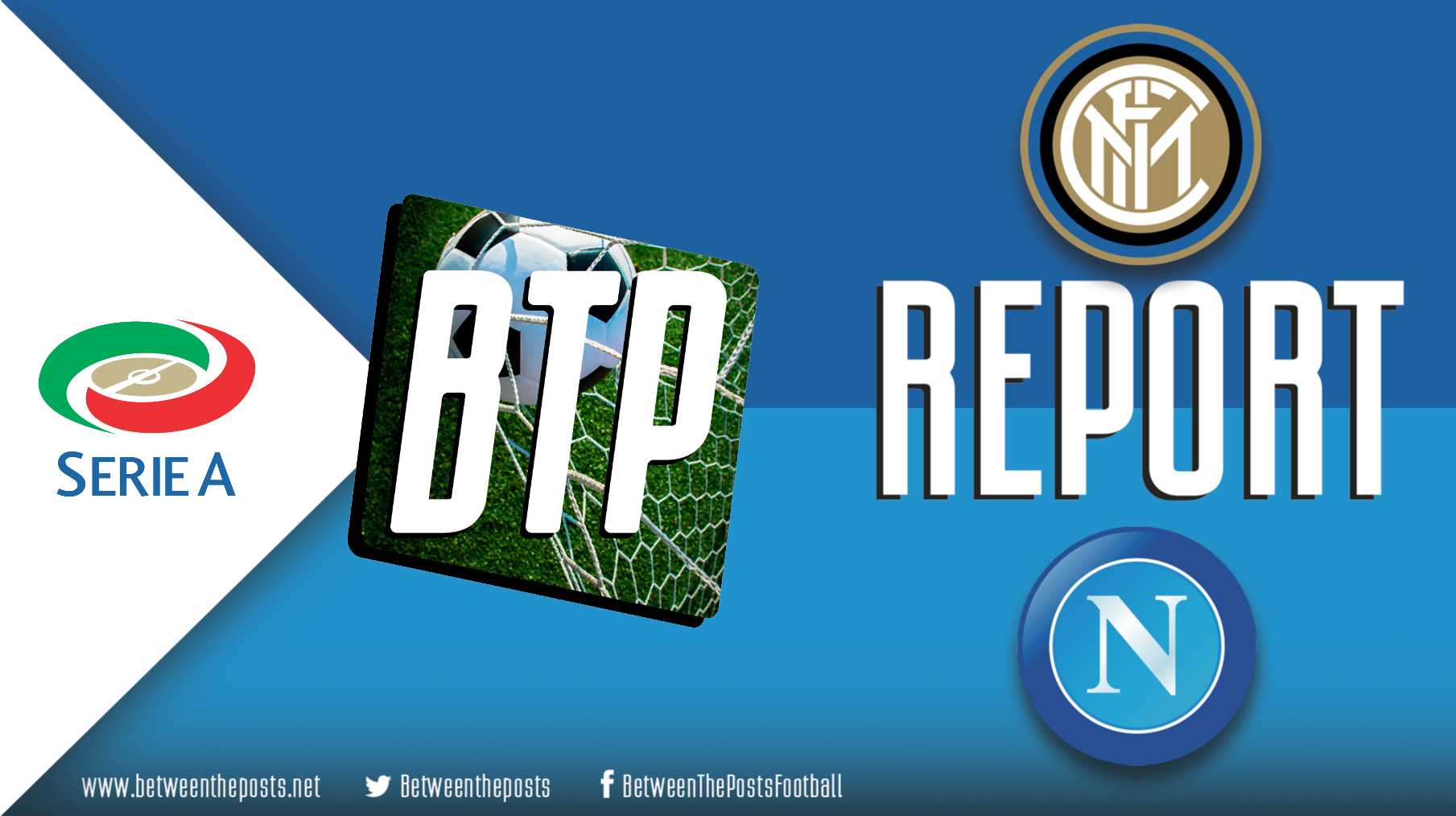