Isn’t this the best time of the year? The winter cold slowly fades away, to be replaced by the thin and hopeful sunlight of early spring. Club football enters its decisive phase, with lots to play for in every competition. After a set of very enjoyable Champions league ties last week and a double goalless affair last night, the biggest competition in club football is back at it with the final two knockout ties tonight.

The Diego Simeone formula has been a steady one for most of his tenure at Atlético Madrid; try a more offensive system at the beginning of the season, fail to implement it effectively, and then revert back to the tried-and-tested defensive philosophy. That same pattern occurred this season, only, this time, Atlético’s defense looks less capable of making up for an uninspired attack.

It doesn’t seem to be for a lack of discipline or defensive versatility; Atléti’s collective organization and understanding of how to manage the passing lanes are still very impressive. They also possess the ability to switch up defensive schemes, as they are fully capable of engaging in an elite high press when they want to. What we are seeing might just be down to the decline or departure of defensive legends; center-back Diego Godín is 32 and midfield general Gabi was transferred in the summer.

Consequently, there has been even greater pressure on Atléti’s attack to deliver, something that has been difficult given Simeone’s rigid and predictable offensive tactics. Without fail, Atlético Madrid’s 4-4-2 formation transforms into a 2-2-2-4 / 2-2-3-1 on the ball, with the fullbacks keeping the width and the wingers moving high into the halfspaces. Atléti’s center backs and defensive midfielders then try to play long balls to the forwards or aim vertical passes into the wingers. If they can’t do either, the fullbacks inevitably receive the ball and are forced to progress play without much forward support – Atléti’s wingers stay in their positions and rarely come towards the ball. 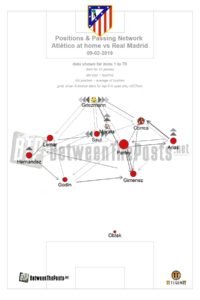 It is in these circumstances that Antoine Griezmann – Atlético Madrid’s best attacker – operates. Like seasons prior, he has found ways to deliver, but now his team’s overreliance on him to progress the ball, create, and shoot, is even more pronounced. If Griezmann does not perform at his best, Atlético have little chance of scoring.

In stark contrast to his counterpart, Massimiliano Allegri often seems to have no formula. He is constantly tinkering with his lineups, changing formations, and looking at new roles for his players. That tactical flexibility has suited him greatly at a club that has cycled through key players extremely fast.

This season, Allegri has had to adapt to the arrival of Cristiano Ronaldo, whose mere talent requires an entire attack to be built around him. Allegri has delivered, transforming Juventus’ offensive style to a cross-heavy approach and alternating through a variety of elevens before settling on a fluid 4-3-3 shape. The interchanging of positions in build-up allows for clean progression to the opposition half while Ronaldo, Mario Mandžukić, and Paulo Dybala roam freely to destabilize defenses. 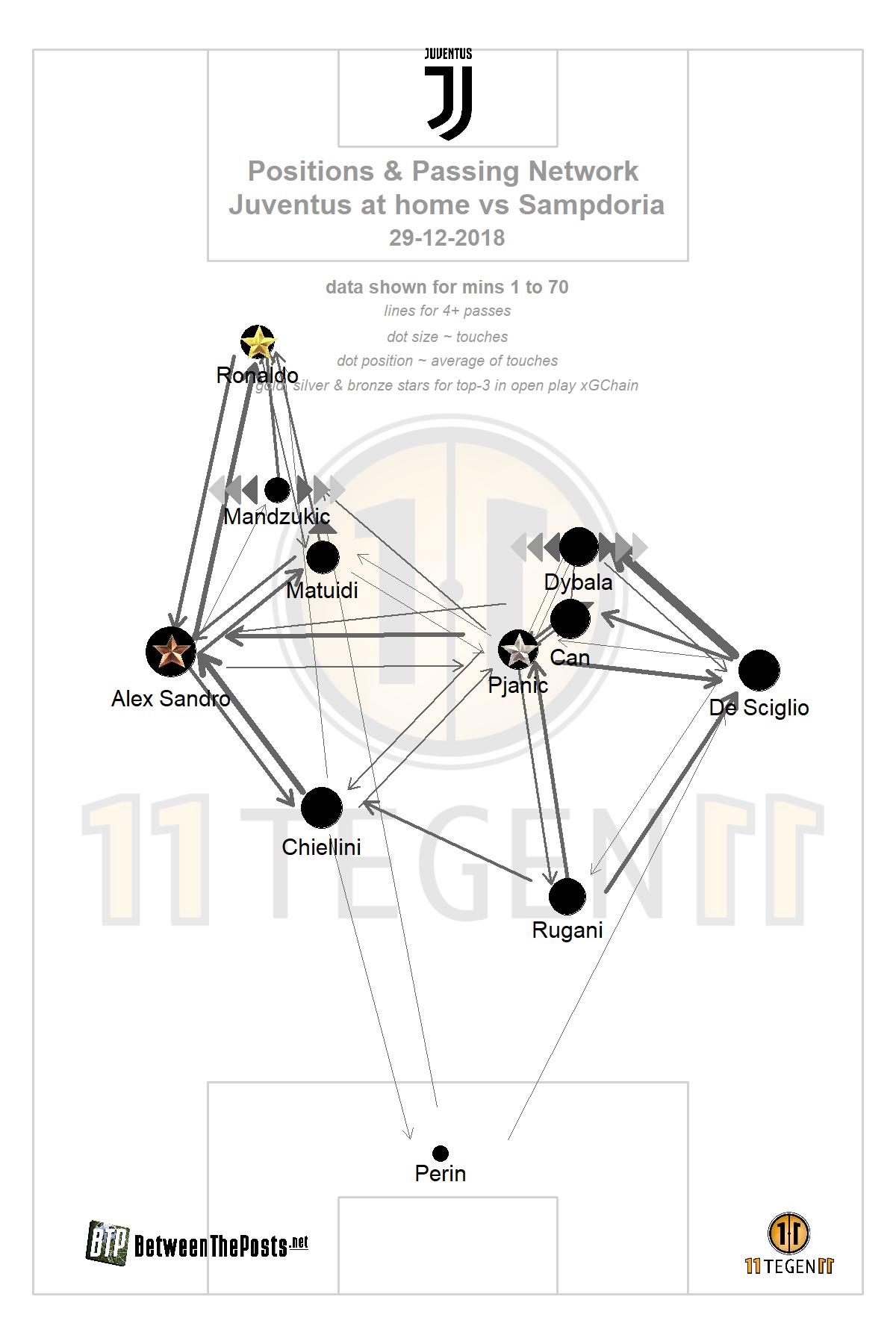 Wherever the front three are, though, Ronaldo and Mandžukić’s end goal is to attack the box, whereas Dybala has embraced a new-ish role that sees him focused on buildup and ball circulation. Along with defensive midfielder Miralem Pjanić, Dybala helps push possession to wide areas, where talented fullbacks Alex Sandro and João Cancelo can launch accurate crosses into the penalty area.

Allegri’s tactical approach can look quite monotonous and it has not garnered positive reviews from the Bianconeri faithful despite its obvious effectiveness. There is concern that the attack is becoming too one-dimensional, with many pointing to the mid-season “slump” as evidence of this. But that dip has been a theme at Juve for years, perhaps signalling complacency due to their utter dominance over the league more than anything.

Juventus seem to have regained some of their mojo in time for the Champions League – another historical theme – but that does not mean there are not things to critique. While Allegri’s offense is better than at any point under his tenure, the fluidity of his attacking structure and cross-heavy approach – which requires Blaise Matuidi and/or Rodrigo Bentancur to make runs into the box – has weakened their counterpressing. Unsurprisingly, Juventus are now quantifiably more susceptible to conceding opportunities on the counterattack.

The clash between Atlético Madrid and Juventus has the potential to be a very interesting encounter or a complete slog to watch. A lot will depend on how Atlético approach the game, since Juventus will undoubtedly look to take the initiative and dominate possession. 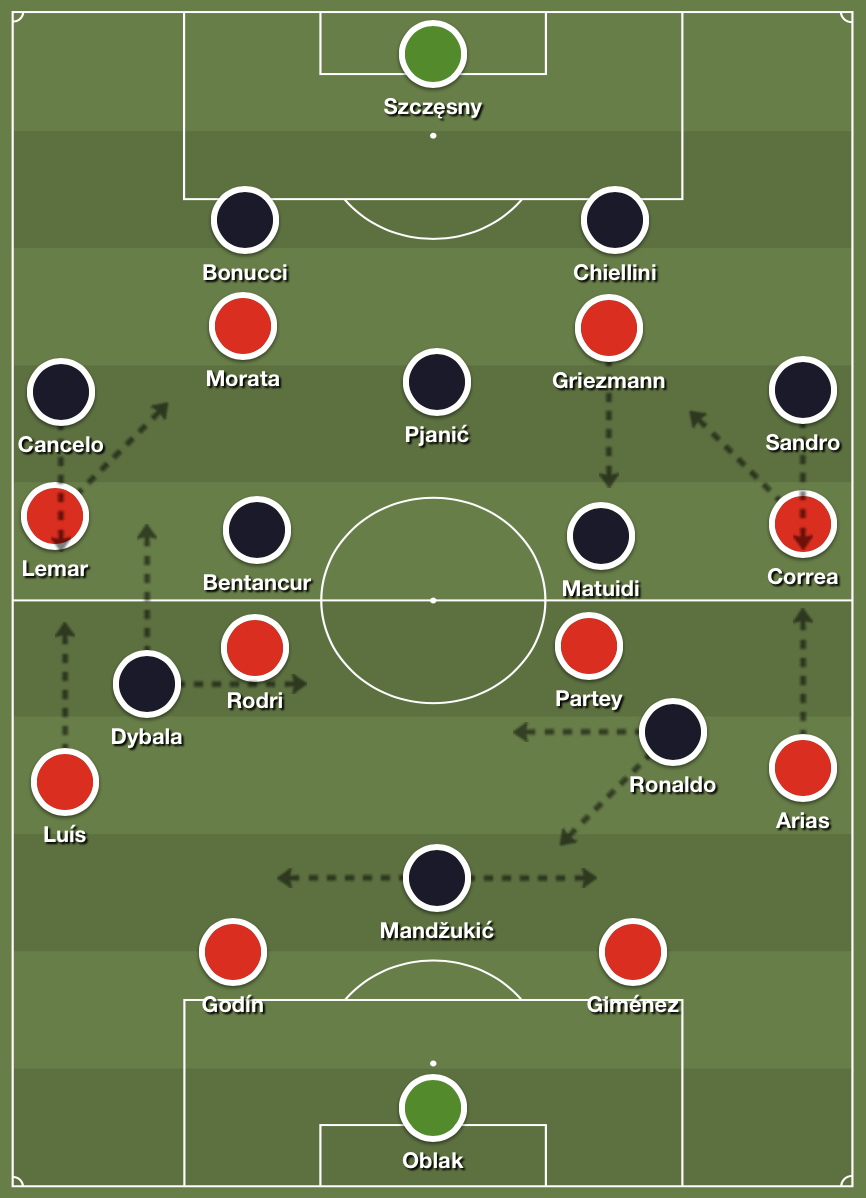 Simeone could opt to press or could opt to defend in a deep block. A defensive block is the compact group of defenders that defends a particular zone, either their own half in a medium defensive block, or the zone around their own box in a deep defensive block. If he chooses to do the former, the game will be injected with high-intensity defending that will either overwhelm Juventus or lead to chances conceded in space. It would be unwise to bet against Atléti trying to take the initiative in such a manner, but it is also equally possible that Simeone decides to go passive.

If that happens, expect a more “boring” game. Juventus will shift the ball from side-to-side in the hope of trying to find space to cross to Ronaldo and co. Atléti will be more than happy to let that happen as they like to direct the opposition to the wings, anyway, creating the perfect environment for a stalemate. In this case, it will likely take some particularly ruthless finishing, the conversion of that one big chance, or a spectacular individual performance for a breakthrough to arrive.

After surprisingly finishing second in the Bundesliga last season, Schalke have regressed badly this season. While a lot of it has been related to finishing on both ends, the team has also lost the consistency it displayed last season. Schalke are not as bad as their current league position suggests, but will have to defy precedent to pose any threat in the Champions League. The goals have largely dried up since Embolo’s injury, making any defensive strategy less viable given the risk of conceding from chaos at any point in the Champions League.

City are returning to full fitness at an ideal time, and Guardiola is starting to find solutions to problems that plagued the side over the festive period. The reigning English champions are finally evolving from last season. Bernardo Silva, David Silva, De Bruyne, Agüero, Sterling and Sané are giving the manager a selection headache, while Gabriel Jesus – presently injured – is a fantastic option off the bench. City’s latest development this season has been using both the Silvas with De Bruyne. While this means benching Leroy Sané, Bernardo is currently undroppable, pressing and progressing as well as anyone, and City have reaped the benefits of playing three natural offensive central midfielder types together, after struggling to create for a period in December. 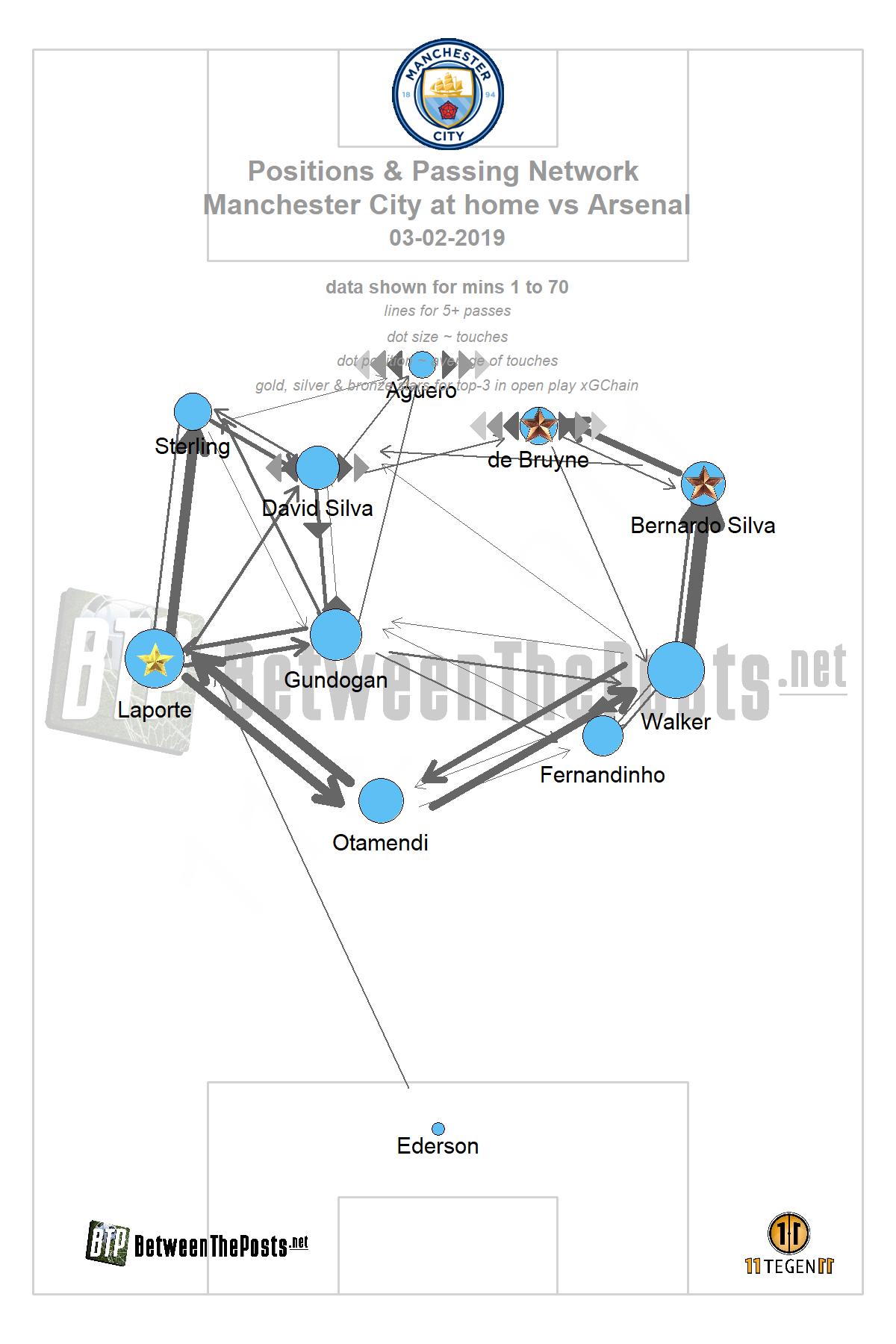 Form wise, City’s entire forward rotation bar Mahrez is at a recent peak. Aymeric Laporte and Fernandinho are relied on rather heavily but are holding down the fort. Left back remains a small issue, and John Stones and Kyle Walker have the odd mistake in them. Still, City head into the Champions League in good stead.

City should be more than well equipped to stop Schalke’s attack, and on that end they can only hurt themselves. Fernandinho, the fullbacks and center-backs usually work hard to shut down any counters. One plausible scenario that could benefit Schalke is getting Fernandinho on a card early. Expect Schalke to exaggerate tactical fouls at home to gain an advantage, because their midfielder heavy lineup should struggle to create chances on the counter.

On the other end, City can thrive unless they paralyze themselves with an early concession. Pep has gotten many Champions League away games wrong in his career, but City are in such strong form that they should find a goal by half-time, after which the floodgates will inevitably open.

While a City meltdown is possible, more likely is a cagey game that could open up as City shred Schalke in transition after scoring one.

This will grant you access to all our coverage of the top five leagues and the Champions League, including our analysis of last week’s matches Manchester United – Paris Saint-Germain, Ajax – Real Madrid and Tottenham Hotspur – Borussia Dortmund as well as last night’s Liverpool – Bayern Munich and Olympique Lyonnais – Barcelona. Members will also get to explore our advanced team stats page. Finally, members are encouraged to post comments and interact with our writers.