For forty-eight minutes, the Europa League Final was a fairly dull affair, with both Chelsea and Arsenal’s pressing games suffocating each other’s buildup. Then, Giroud scored and the floodgates crashed open, allowing Chelsea to capture the Europa League trophy by the half hour mark.

Judging causality in football over the course of several months – let alone one game – can be difficult. There are a multitude of factors that could affect a result beyond a manager’s choices and the inherent quality of their players; weather, injuries, form, luck, etc. Yet, it is common for fans and pundits to draw huge conclusions from one high-profile game and let the result completely alter their perceptions of an entire season.

Such a reality placed immense pressure on Maurizio Sarri and Unai Emery to finish 2018/19 strong by winning the Europa League. They, more than anyone, were likely aware that a loss would drastically redefine the narrative of their first year in England. Win, and suddenly they had orchestrated a brilliant season. Lose, and suddenly they were flops that deserved to be sacked.

The truth on both manager’s first seasons lies, of course, somewhere in between. Sarri has done well to push a squad with many mediocre elements to third in the league table. Simultaneously, he has also proven to be overly rigid with his philosophy and has failed to adapt when opposing teams have adequately countered his circuit-based form of buildup. Emery has also struggled with his buildup – which has decreased Arsenal’s efficacy on the ball in comparison to the Wenger era – while developing a pressing system much stronger than before.

However, as mentioned previously, such nuance would not be afforded to either manager, putting much on the line in this European Final. Unsurprisingly, both coaches chose strong elevens. Sarri went with his classic 4-3-3 formation: Eden Hazard, Olivier Giroud, and Pedro up top; Mateo Kovačić, Jorginho, N’Golo Kanté in midfield; Emerson, David Luiz, Andreas Christensen, and César Azpilicueta in defense; and Kepa Arrizabalaga in goal.

By contrast, Emery chose to change things up by selecting a 3-4-1-2/5-2-1-2 shape. Pierre-Emerick Aubameyang and Alexandre Lacazette spearheaded the attack ahead of Mesut Özil, who occupied the number ten spot. Granit Xhaka and Torreira formed the double pivot in between fullbacks Sead Kolašinac and Ainsley Maitland-Niles. Behind them, sat the trio of center-backs: Nacho Monreal, Laurent Koscielny, and Sokratis Papastathopoulos. Petr Čech started in goal.

Chelsea and Arsenal struggle to beat each other’s pressing game

Arsenal’s previous win over Chelsea was achieved by man-marking Jorginho and pressing Chelsea’s midfield in a 4-4-2 diamond structure. Perhaps worried that Chelsea might find a way through wide areas this time around, Emery modified his earlier approach by dropping the number six in favor of having a back five. Thanks to the change, Arsenal could now man-mark every single Chelsea player on the field, including Emerson and Azpilicueta. 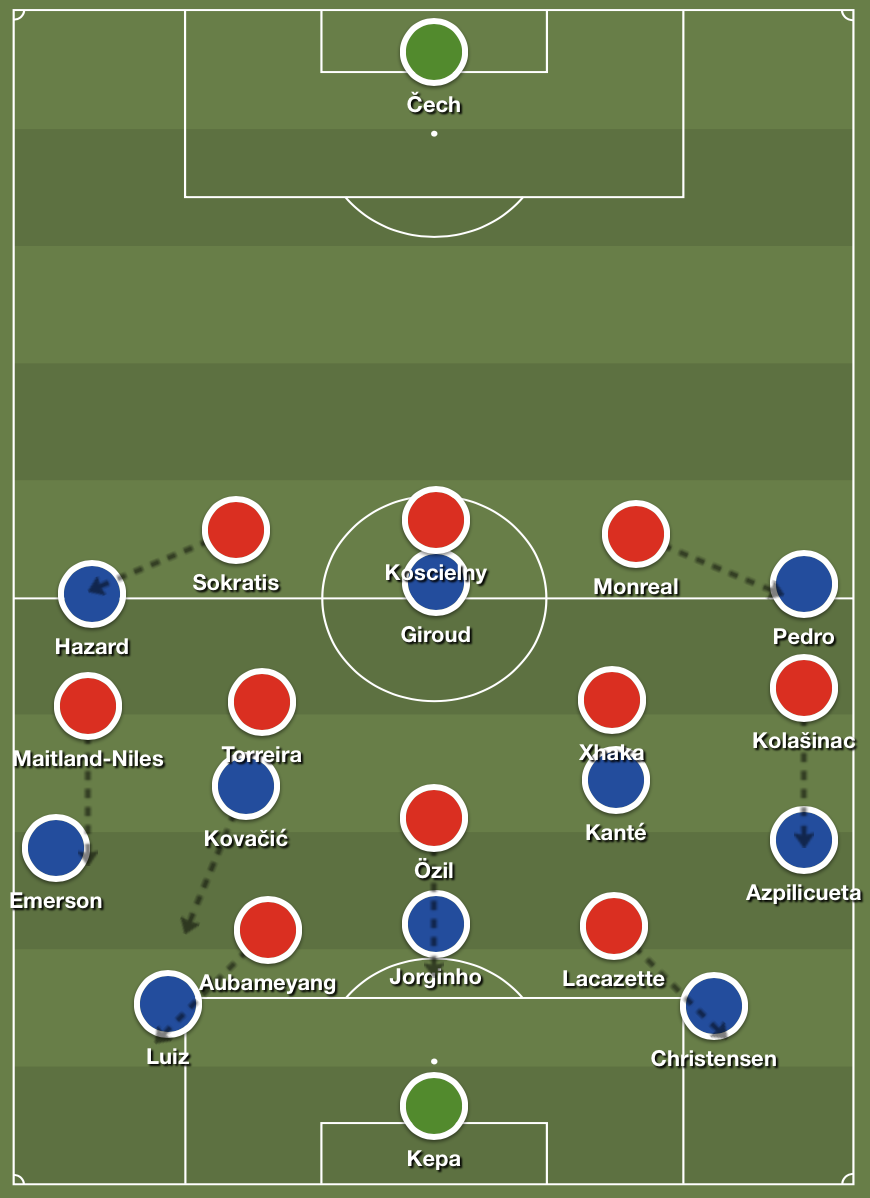 Despite that capability, Arsenal initially left Chelsea’s fullbacks free to receive the ball. The initial focus was on blocking central areas and preventing Jorginho from influencing the game. Once Emerson or Azpilicueta received a pass, either Maitland-Niles or Kolašinac would spring forward to apply immediate pressure. It was a ploy to draw Chelsea into wide areas, where it is generally more difficult to progress the ball and easier to concentrate defensive attention.

Consequently, Chelsea struggled to break past Arsenal’s system and would have been overrun if not for their own high press. 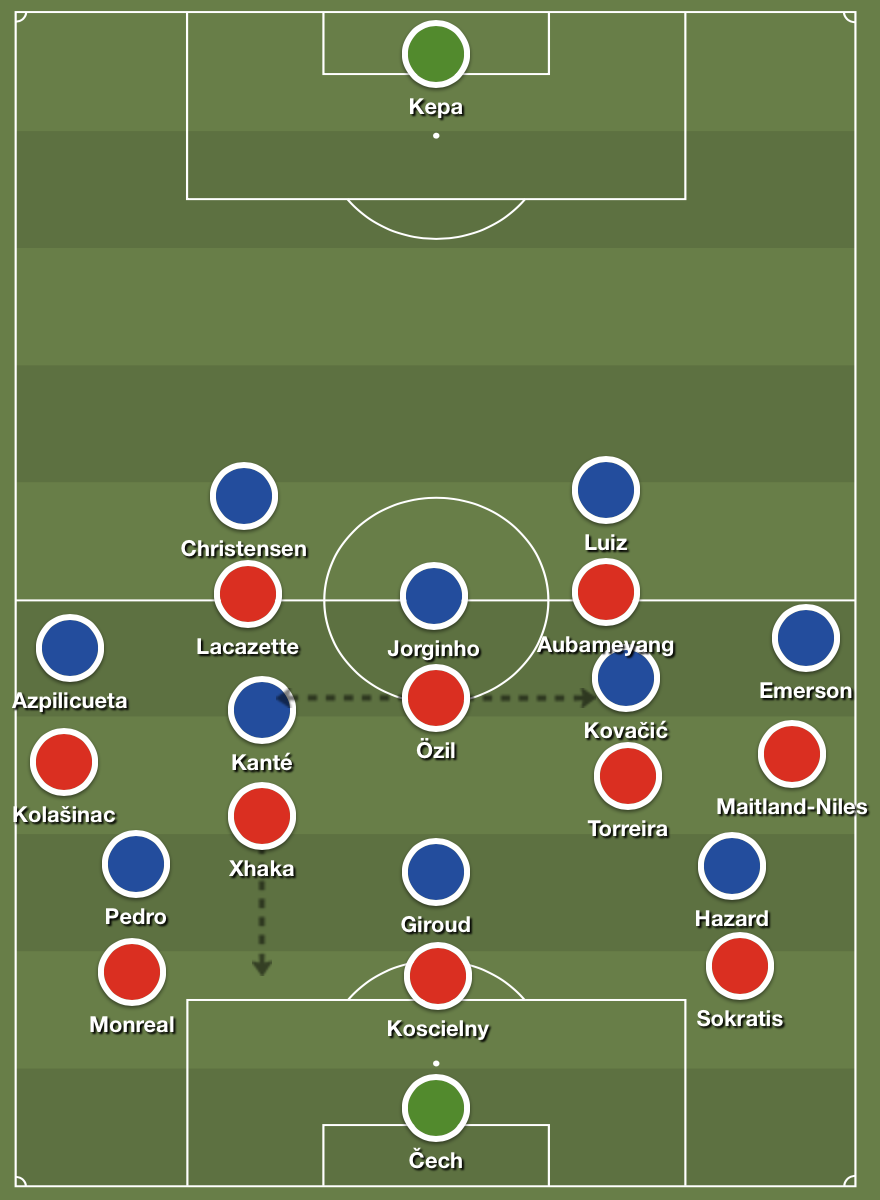 Chelsea execute a man-to-man press of their own.

The ease with which Emery’s formation matched up man-to-man with Sarri’s 4-3-3 had its drawbacks, though, as it allowed Chelsea to comfortably implement a man-to-man press of their own.

Arsenal, who have struggled with an overly rigid and predictable form of buildup all season, found it almost impossible to progress the ball via short passing. This forced them into a multitude of long passes, which limited Özil’s influence – and thus Aubameyang’s and Lacazette’s influence – over the game.

Chelsea’s press also helped facilitate the best chance of the half, as it allowed them to win a throw-in in the 38th minute. After some probing, Chelsea circulated the ball backwards before quickly going vertical in classic Sarriball fashion. This put Hazard in a position to find Jorginho with an excellent pass, who then laid the ball off for Giroud. The Frenchman struck a fine shot on goal but was denied by Čech. 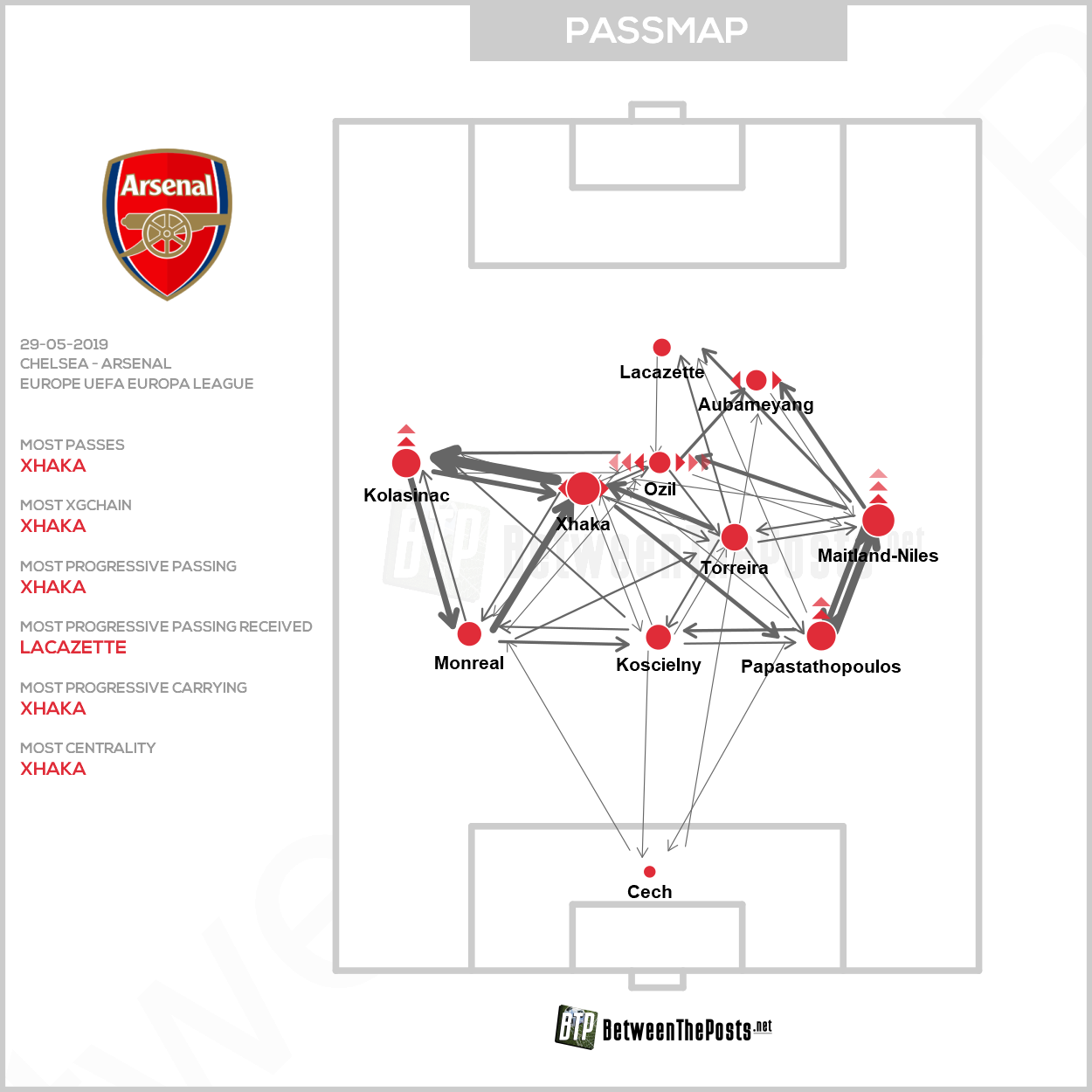 The distinct lack of connections to Özil is clear from Arsenal’s passmap.

Chelsea explode after the break

In the 47th minute, Chelsea sprung forward on a rare counterattack, allowing them to win a corner. The resulting sequence of events eventually led to a throw-in, which fell to Kovačić after a clearance and a series of fifty-fifty duels. The Croatian quickly shifted possession to Emerson on the left, who flighted a cross into the box. Giroud reacted instantly and dove in front of his marker to head Chelsea into a 1-0 lead.

The goal seemed to provide the Blues with a mental boost, as they began to win every fifty-fifty duel available to them – including ones that resulted from their own poor buildup play. As a result, transition opportunities started to develop with great frequency and Eden Hazard finally got the opportunity to take over the game. 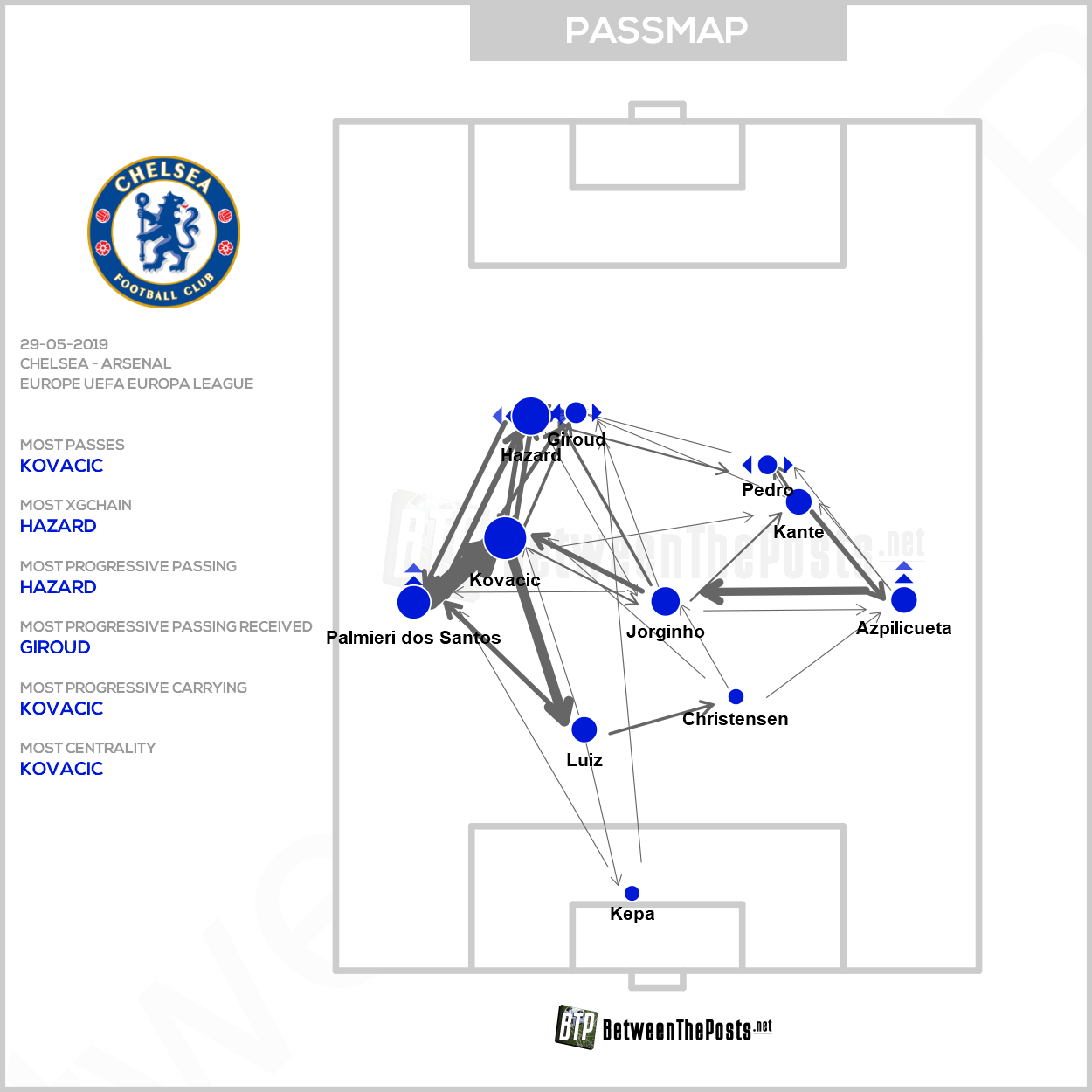 Chelsea’s left flank was on song, most notably in the second half, allowing Hazard to exert his influence over the game.

In the 59th minute, Maitland-Niles was dispossessed after attempting to dribble out of the back, allowing Hazard to play a one-two with Kovačić that put the former on the left-hand side of the box. With plenty of time, Hazard looked up and squared a pass to Pedro, who finished past Čech to make it 2-0.

Minutes later, Kovačić surged past multiple defenders and found Pedro on the right wing. The Spaniard cut inside and threaded a pass towards Giroud, who was foolishly fouled in the box by Maitland-Niles. Hazard made no mistake from the spot and put Chelsea up 3-0.

The massive lead led to an eruption of chaos. Arsenal, desperate for a miracle, threw everyone forward, creating a high-octane, end-to-end atmosphere. The last twenty minutes of the game saw both teams combine to create sixteen shots, with substitute Alex Iwobi scoring a screamer from outside the box and Hazard picking up his second goal of the night after a foolish Aubameyang turnover. 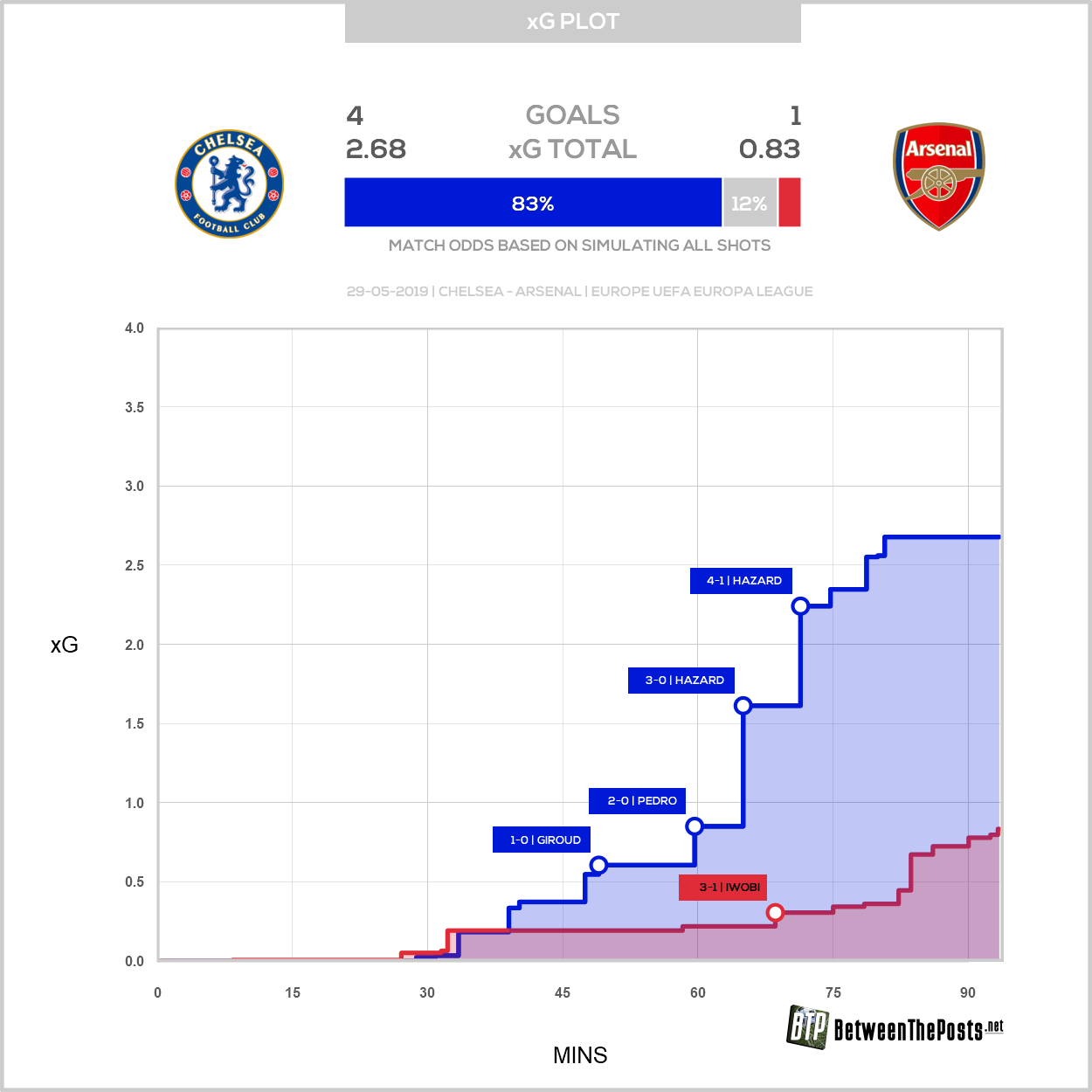 Chelsea certainly deserved to win but the scoreline does not reflect the more even nature of the Europa League Final. For half of the game, both teams cancelled each other out, until an Emerson cross found its target and the first goal arrived. Soon after, Arsenal lost crucial fifty-fifty duels and made careless mistakes at the back, causing the game to spiral out of hand in a matter of minutes.

Chelsea most definitely warrant praise for upping their game on an individual level and taking advantage of Arsenal’s mistakes, but those errors and fifty-fifty duels could have played out very differently on another day. Hence, it is difficult to attribute the victory to some kind of tactical masterclass from Sarri. This is especially the case when considering that the Italian manager did little different from the 2-0 loss to Arsenal earlier in the season. His team just happened to be better on the day. 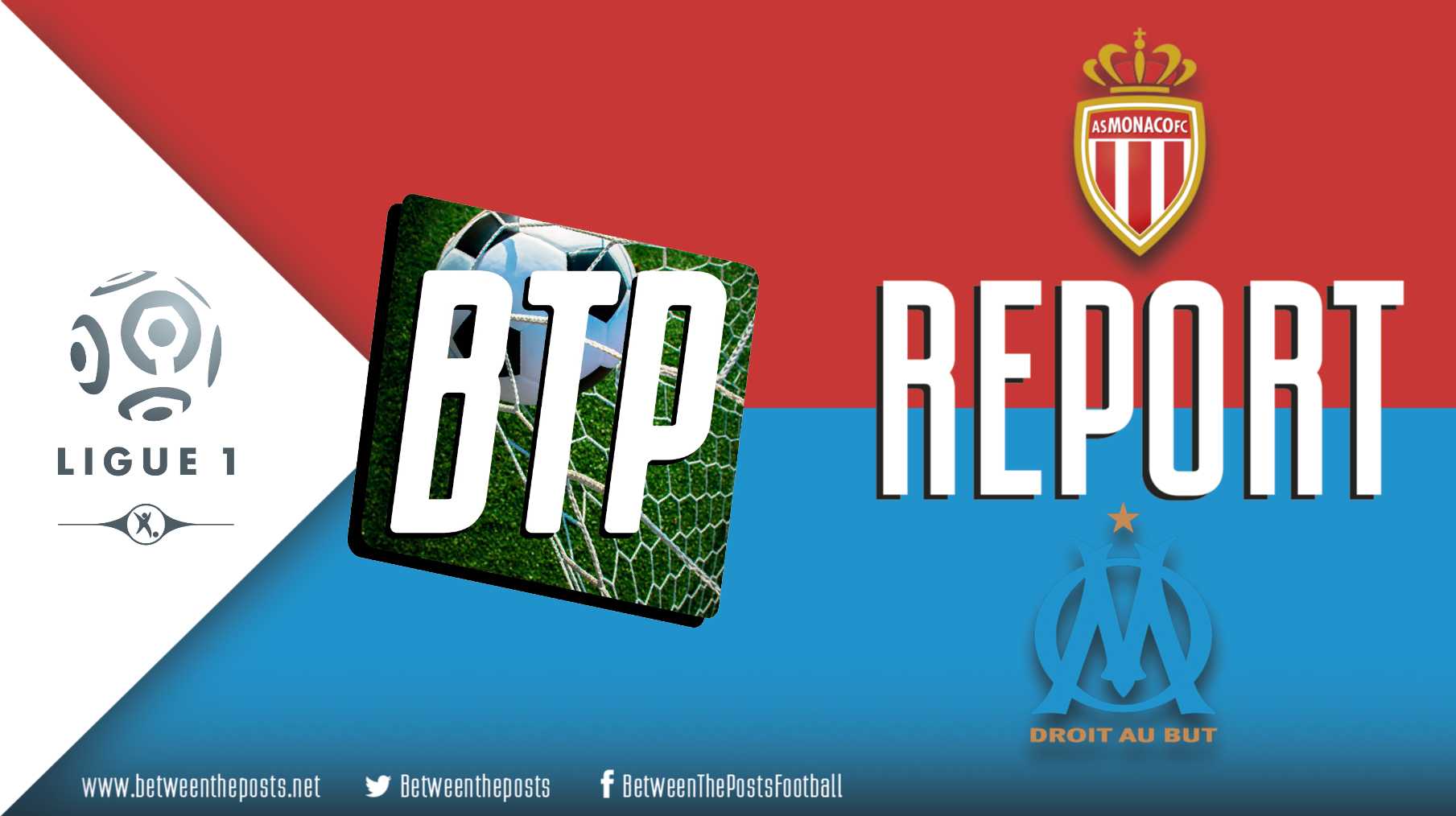 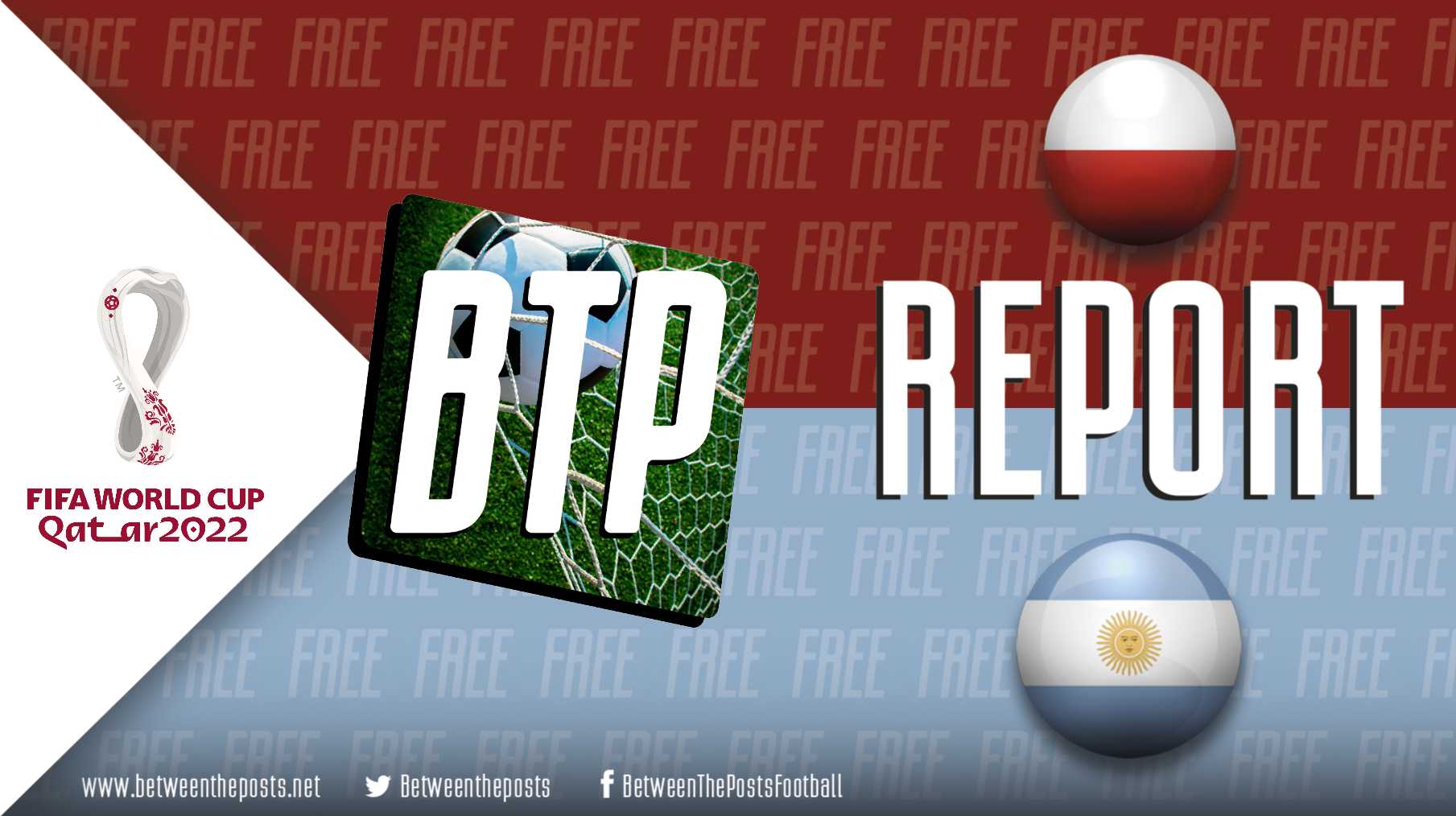