The Europa League semi-final clash between Chelsea and Eintracht Frankfurt was characterized by stalemate. Both Maurizio Sarri and Adi Hütter struggled to put their teams in the driver’s seat, forcing the tie to go down to penalties. Kepa Arrizabalaga held his nerve after Azpilicueta missed, allowing Eden Hazard to bury the winner and create an All-English affair in Europe.

The tail-end of the footballing season is upon us, which means the return of big European nights and tense league clashes. Usually, this means Real Madrid, FC Barcelona, and Bayern Munich are the ones grabbing the highlights in these latter stages, with the “weaker” Spanish teams thriving in the Europa League. But, just this week, we were thrilled by epic Champions League comebacks from Liverpool and Tottenham Hotspur, symbolizing the return of English dominance on the mainland.

The Europa League semi-finals between Arsenal and Valencia and Chelsea and Eintracht Frankfurt provided an opportunity to solidify this resurgence. But such thoughts were likely at the back of Maurizio Sarri’s mind as he prepared his team for the second leg of the Europa League semi-finals. He had much more pressing matters to concern himself with, such as his team selection.

Much-maligned for choosing the same eleven over and over again for the bigger part of the season, Sarri has finally acquiesced and begun to start younger fringe players. Against Eintracht Frankfurt, he placed Ruben Loftus-Cheek in midfield and Emerson at left back alongside his standard eleven.

Manager Adi Hütter largely maintained the same lineup that managed the 1-1 draw versus Chelsea in the first leg; the formation was still a 3-5-2, but Mijat Gaćinović dropped into midfield in place of Gelson Fernandes and Ante Rebić started up top next to Luka Jović.

It is well established that Sarri’s Chelsea experiment has not gone to plan. It seems that what enabled their fast start has also been the reason for their stagnation, as Sarri’s repetitive, circuit-based system has become predictable and uninspiring.

There were even warning signs in their bright start to the season, where they blitzed into the final third The one-third of the pitch that is closest to the opposition’s goal. but found it difficult to create quality chances. Hazard’s early expected goals The amount of goals a team is expected to score based on the quality of the shots they take. overperformance and all-round genius helped hide this. But regression to the mean In any event where a certain factor of luck is involved, like football, outcomes that differ from what one would expect based on underlying statistics are not sustainable over long periods of time. When a team starts scoring or conceding goals again in a way that is more suitable to their underlying statistics, this is an example of ‘regression to the mean’, as the unexpected results do not occur any longer. soon occurred and the likes of Tottenham and Arsenal showed everyone how to stop Chelsea higher up the pitch. 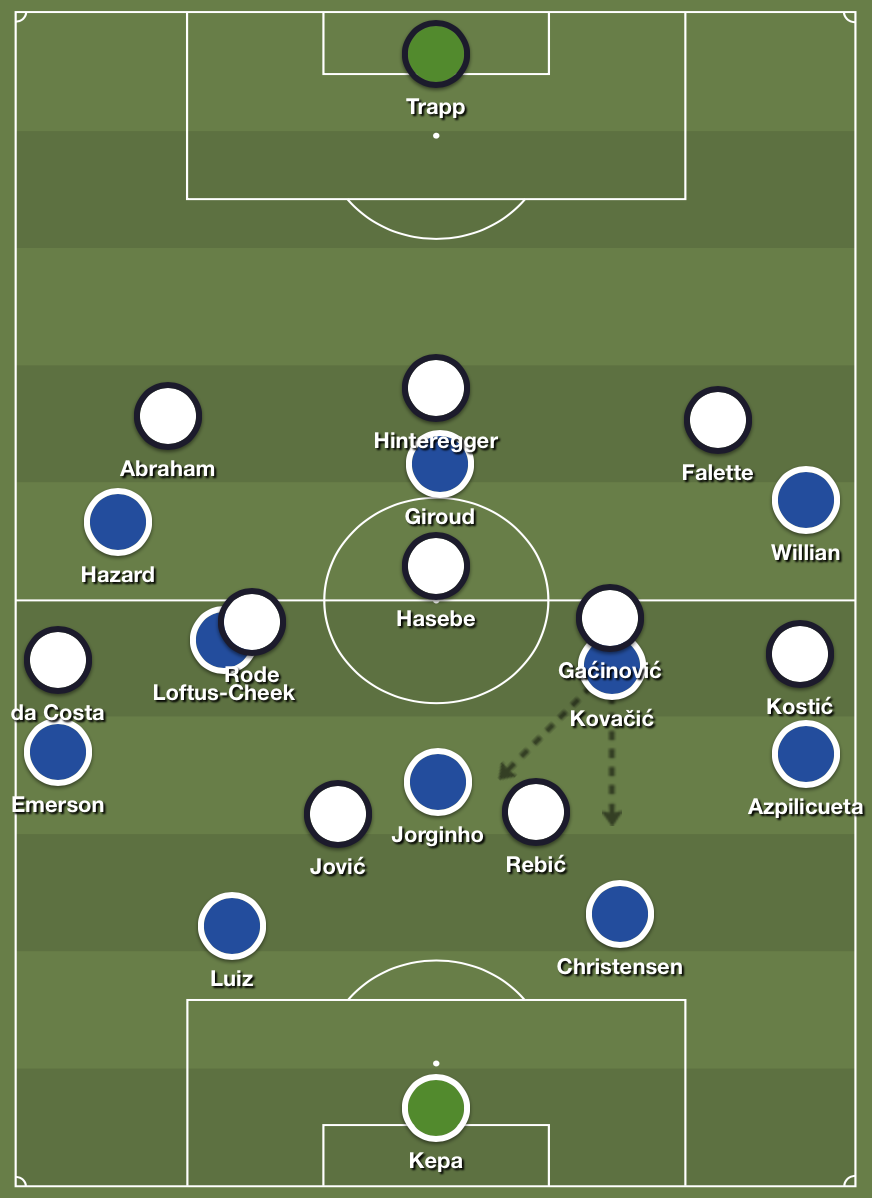 Jović and Rebić stayed narrow and screened Jorginho, while Sebastian Rode and Gaćinović stuck tight to Loftus-Cheek and Mateo Kovačić. This inevitably forced Chelsea to go wide, where either Emerson or César Azpilicueta were put under immediate pressure by wing-backs Danny da Costa and Filip Kostić. In order to keep Chelsea stuck on the relevant flank, Frankfurt’s near side striker would either close in on the ball carrier or protect the passing lane back to the near side center-back. The far side The far side is the side of the pitch where the ball is not. striker would man-mark Jorginho.

Chelsea found it very difficult to break through Hütter’s defensive structure and were forced to feed off scraps from fifty-fifty duels, individual brilliance, counterattacks, and set-pieces. In the 28th minute, the individual brilliance part of the equation came through, when Hazard created a passing angle from a one-versus-one situation. Ruben-Loftus Cheek read the situation and made a run into the final third, before latching onto Hazard’s through ball and scoring the opening goal with a cool finish.

Those types of off-ball movements have been sorely lacking in Sarri’s system all season – movements that were once executed by Marek Hamšík at Napoli. The supposed Hamšík-replacement, Kovačić, has proven unwilling or unable to make these runs, as he prefers to drop deep and act like a controller. Loftus-Cheek could not be more different, and it paid dividends versus Frankfurt. 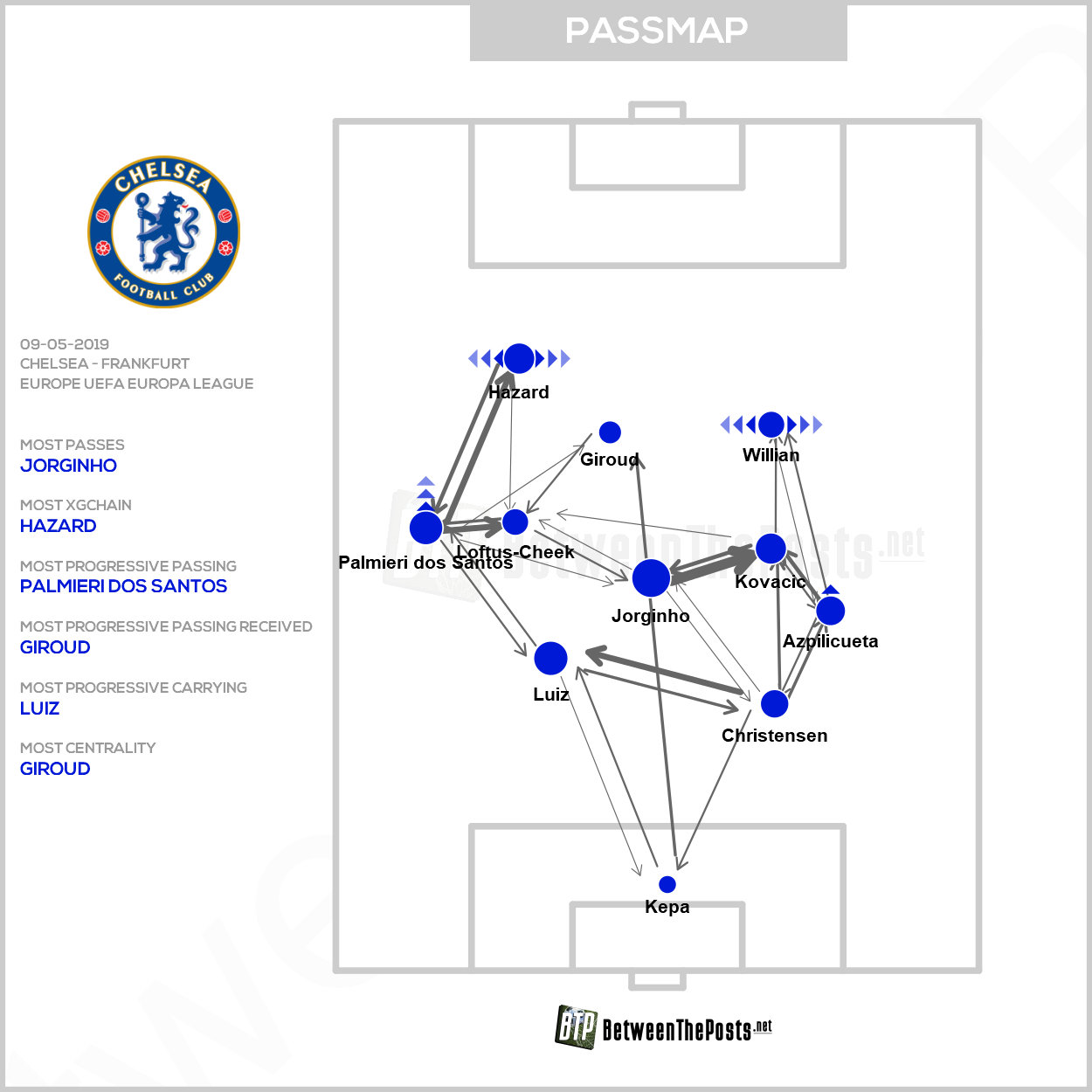 For all of Chelsea’s first half offensive struggles, Frankfurt were even worse. They registered a mere four shots and the only one of notable quality was a Jović header from a corner, though da Costa did his best with a difficult volley.

Much of this had to do with their direct strategy. 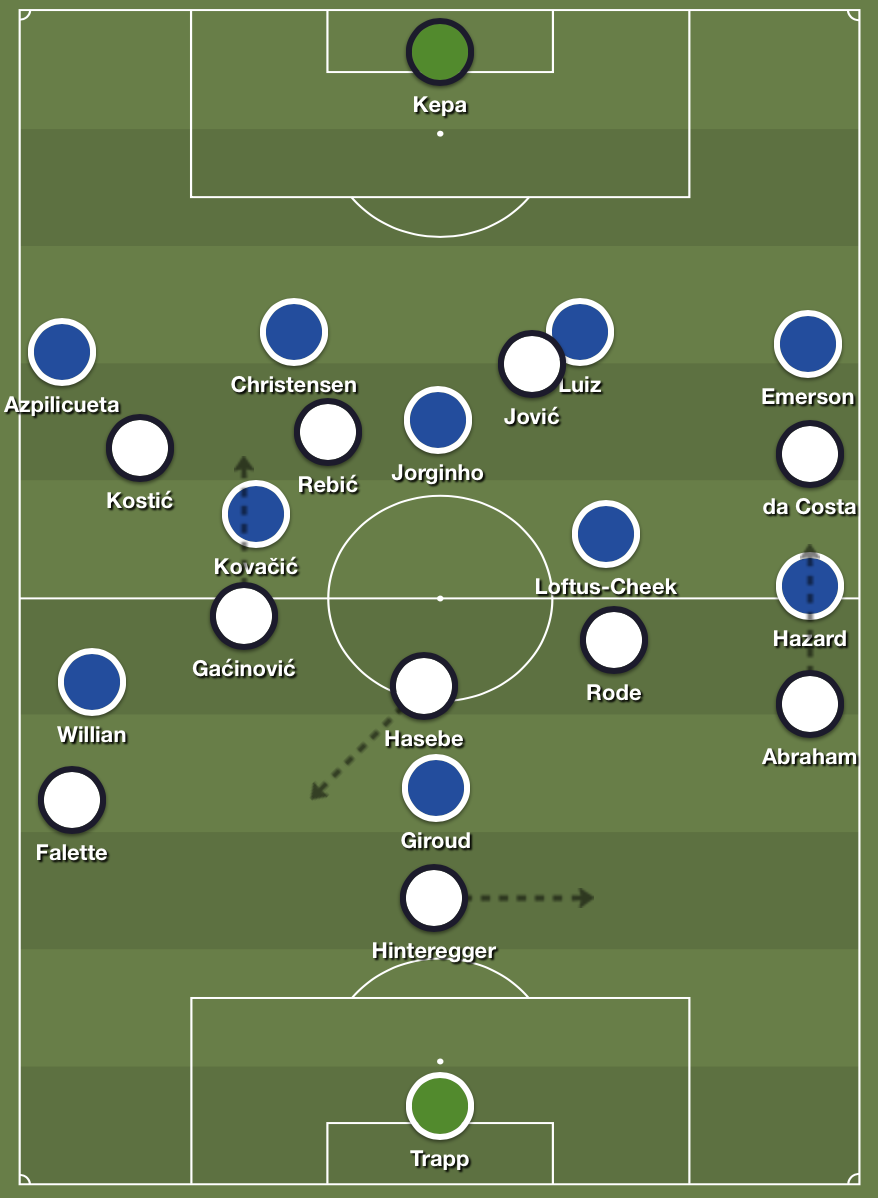 When not able to surge forward on counterattacks, Frankfurt organized themselves into an asymmetric structure that was designed to optimize the use of width and long balls. Makoto Hasebe would often abandon his ‘number six’ position in favor of dropping into the back line. This served two purposes: (1) it allowed wide center-backs Simon Falette and, especially, David Abraham to attack as auxiliary fullbacks and (2) gave Hasebe time and space on the ball.

The first purpose was largely irrelevant on the day, as Abraham and Falette failed to get involved in attack. Instead, Frankfurt’s offense relied on Hasebe’s long distribution into forwards Rebić and Jović, with the likes of Kostić and Gaćinović eager to win second balls. 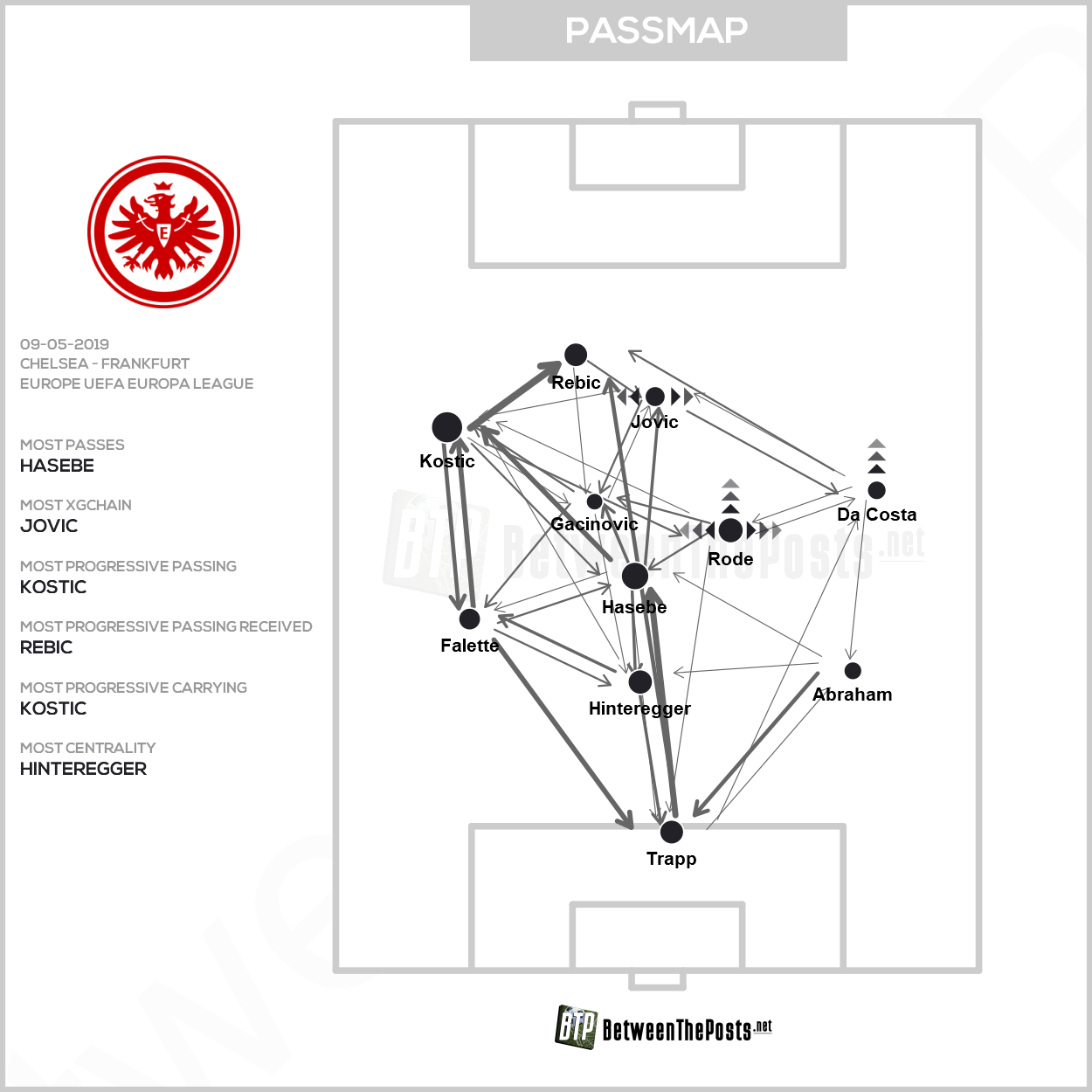 Thanks to Chelsea’s monopoly over possession and ability to control the pace of the game, Frankfurt had very few opportunities to make such a high-variance tactic work. But the second half brought more chaos, with the game devolving into more fifty-fifty duels and transition moments.

The high-octane environment suited Frankfurt better and they quickly exploited it after the break, when Hasebe arrowed a lofted delivery into Jović. The on-form forward chested the pass into Gaćinović before spinning in-behind. David Luiz, who was marking Jović, inexplicably stepped forward after the pass, allowing Jović to receive the return ball in space. Unsurprisingly, the Serbian striker equalized to make it 1-1 after an ice-cold hesitation move.

But, even with players like Jović, a structure built to maximize the strengths of direct play, and a chaotic environment, the route one approach can be difficult to pull off. After their goal, Frankfurt failed to create a clear-cut chance like that again, allowing the game to go to extra-time.

Chelsea hold their nerve in the penalty shoot-out

Extra-time did not feature much in terms of open play chance creation, as the offensive struggles of the previous ninety minutes became amplified under increased fatigue. The drama was high, however, as Chelsea cleared two shots coming from set-pieces off the line.

Frankfurt were made to rue those missed opportunities when it came time for spot kicks; both Martin Hinteregger and substitute Gonçalo Paciência let Azpilicueta off the hook for his miss and allowed Hazard to convert the winning penalty in dramatic fashion. 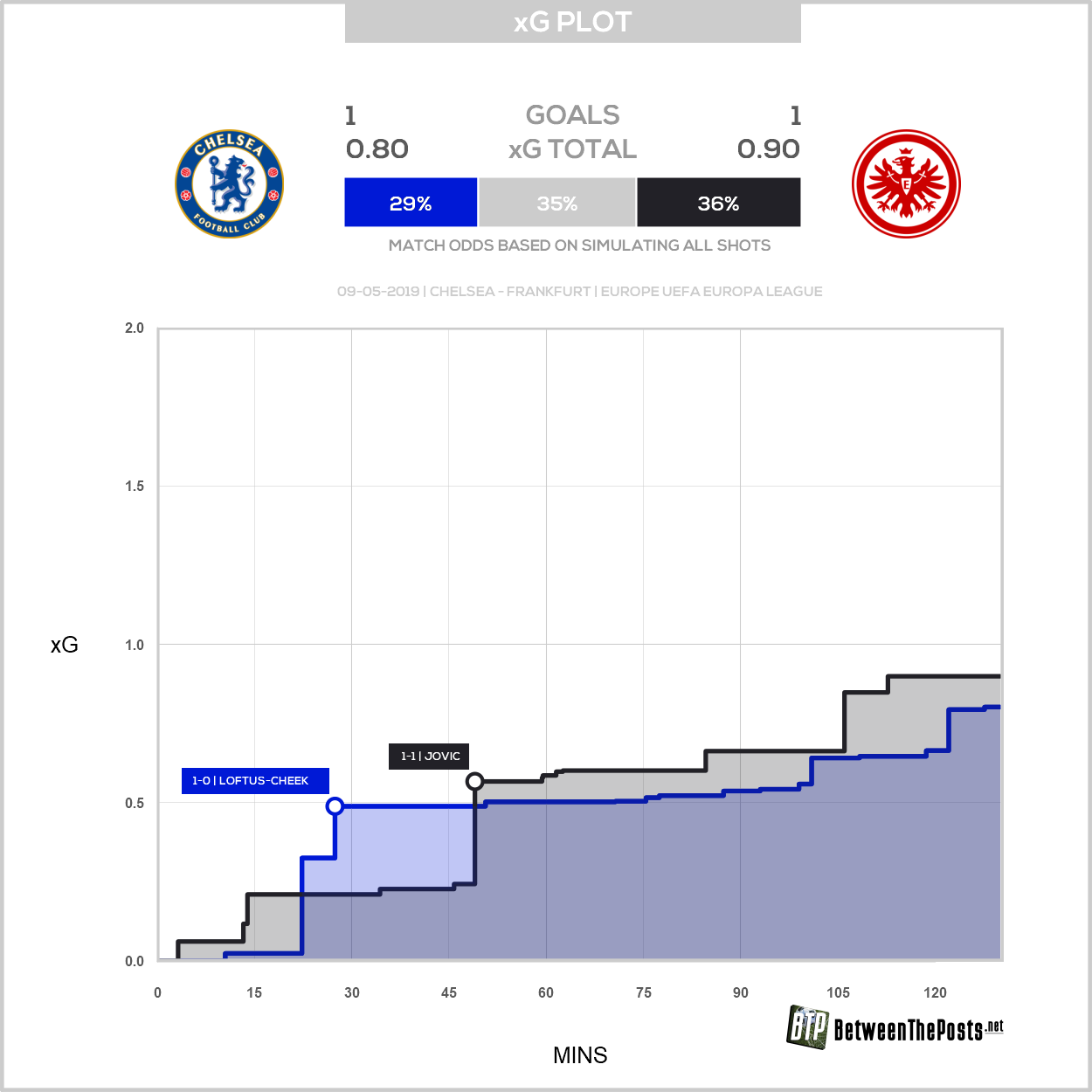 2019’s Europa League Final will feature two evenly-matched teams that both would have wanted more out of their Premier League campaign. For Arsenal, winning the Europa League remains their last avenue to reenter the Champions League, while for Chelsea securing the second-tier European Cup will be a way to add some spice to a bland season. Emery will look to take inspiration from his previous victory over Chelsea and Sarri will hope that Eden Hazard can cause nightmares for Arsenal’s shaky defense.

While everything besides the title race is already decided in the Premier League, the top four battle is still very much ongoing in the Bundesliga. Eintracht Frankfurt currently sit in fourth place, level on points with Bayern Leverkusen and only two points ahead of Borussia Mönchengladbach and Wolfsburg. They must take heart from their run in the Europa League and use it as fuel to ensure that they can show up in the bigger European competition next year. 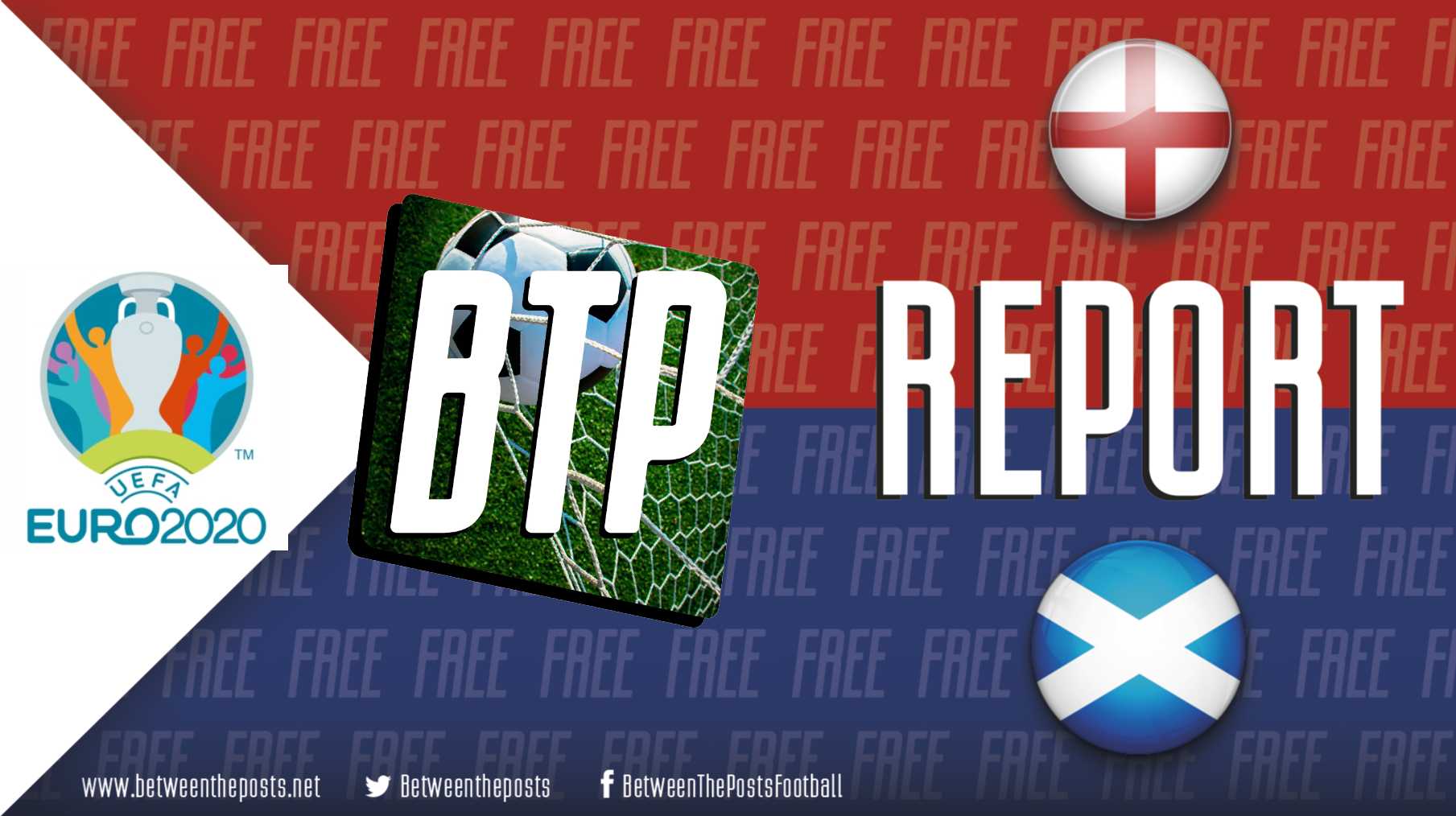