For spells in the game, neither team were at their best, but Liverpool were able to get in front with two goals from set-pieces in the first half. A common theme for both teams was to seek direct routes to beat the opponent’s press. As the game progressed, Liverpool began to defend deeper, which allowed Chelsea to take control of possession, especially after N’Golo Kanté’s goal. Liverpool, however, were able to hold onto their lead and walk out 2-1 winners.

After disappointment in midweek with a defeat away at Napoli, Liverpool returned to Premier League football looking to make it six wins from six games in the league so far. Manager Jürgen Klopp made just one change from the team that played against Napoli, introducing Georginio Wijnaldum into the midfield in place of James Milner as Liverpool lined up in their usual 4-3-3 shape.

Chelsea also faced Champions League disappointment as they lost to Valencia at home. Having experimented with a 3-4-3 system in the last couple of games, manager Frank Lampard returned to four-at-the-back for this game. This was probably partly due to N’Golo Kanté’s return to the side, as Lampard removed one center-back from the lineup in the form of Kurt Zouma in order to accommodate a switch to a 4-3-3 formation. Kanté lined up in the midfield three alongside Jorginho and Mateo Kovačić.

Much of the first half, especially early on, took place in Chelsea’s half of the pitch, with Liverpool looking to press against Chelsea’s buildup. Chelsea struggled to assert themselves against this and ended up seeking more direct routes to try and gain territory up the pitch.

Chelsea played a fairly standard 4-3-3 shape in deeper buildup, as the center-backs split and the fullbacks pushed up. The front three moved into narrower positions, while Jorginho as the number six remained in central positions in front of the center-backs to try and provide connections to outplay the Liverpool press.

Without a nominal number ten in their formation to mark Jorginho, it was often Fabinho, Liverpool’s own number six, who found himself pushing higher up the pitch to pressure Jorginho in Chelsea’s buildup.

The ball often ended up going out to the fullbacks for Chelsea, as Liverpool’s wingers stayed in narrower positions close to the Chelsea center-backs. Jordan Henderson and Wijnaldum in Liverpool’s midfield three were often the ones responsible for covering large amounts of ground to pressure the Chelsea fullbacks. Meanwhile the wingers’ backwards pressing from a higher position would attempt to double up on the Chelsea fullbacks and prevent passes back inside. 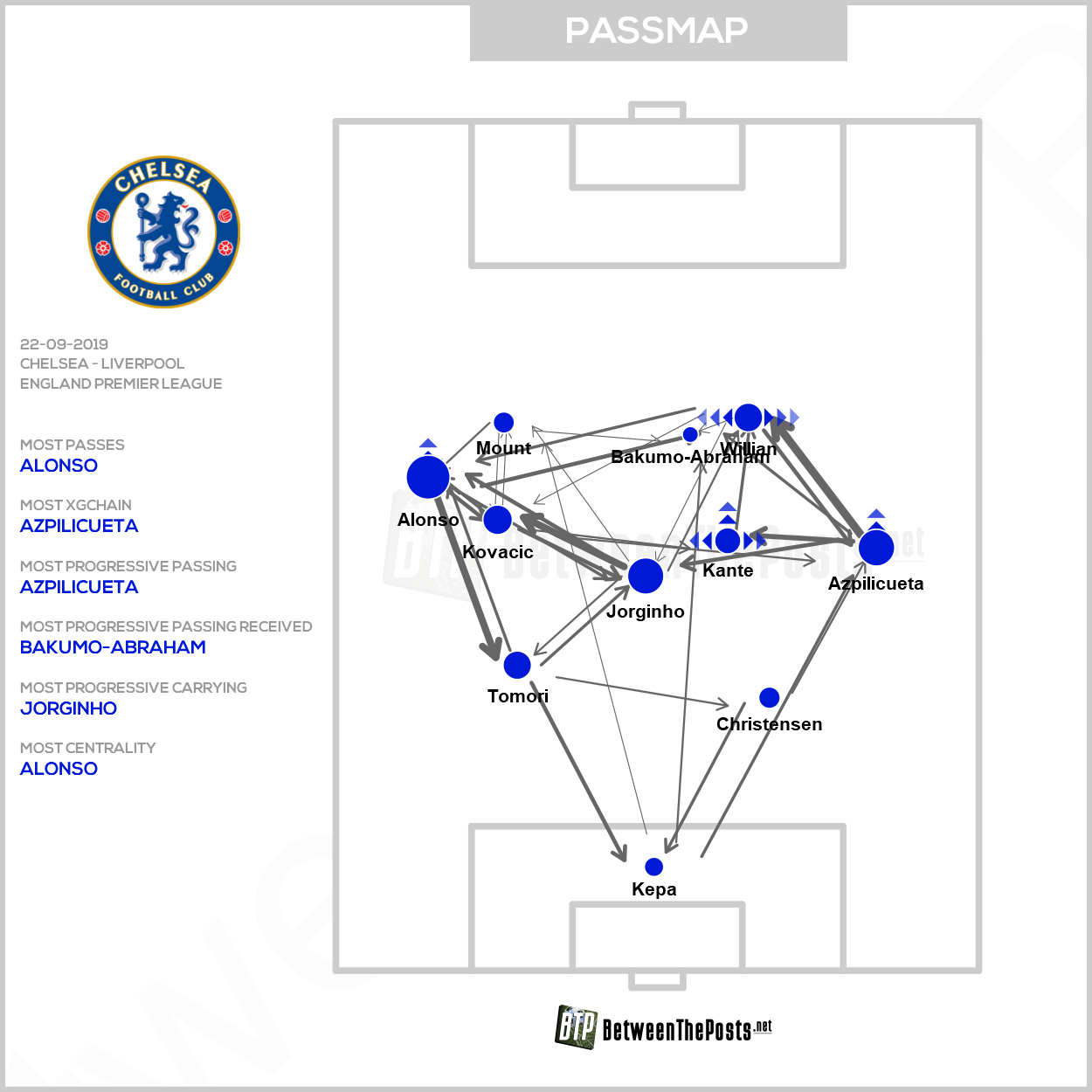 Chelsea were sometimes made to take more direct routes to attempt to play out against pressure then. They looked for long balls towards the likes of Tammy Abraham up front as well as bringing Willian and Mason Mount into play in narrow positions to try and bring Chelsea up the pitch.

Another feature already observed this season is Liverpool’s seemingly higher defensive line than last season, and there were again examples of Chelsea looking to exploit this with early passes in behind the defense against the compact Liverpool block. One of Chelsea’s best chances in the first half came about this way, as Abraham was able to break the offside trap and get a one-versus-one against Adrián, who was able to save the striker’s shot. 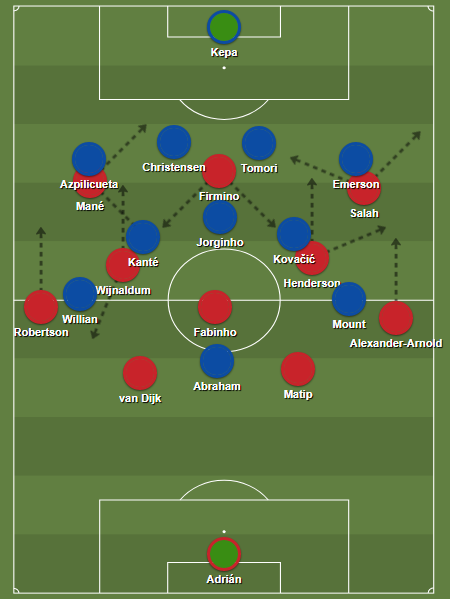 Liverpool attacked in the 4-3-3 system they are well known for, with balanced rotations between fullback, central midfielder and winger on each side. Often, Liverpool’s central midfielders will be the ones to drop into deeper positions to support the buildup, while the fullbacks overlap them When a wide player, most of the times a wing-back, runs outside to fill in the space left by a winger going inside with or without the ball, this is called overlapping. and the wingers move inside.

However, in this game it seemed like the central midfielders remained in higher positions a bit more often than usual, which meant the fullbacks remained deeper and joined attacks later. On the right side for example, Henderson would sometimes pull into wide positions when Salah moved central, rather than Trent Alexander-Arnold joining the attack straight away. When Salah stayed near the touchline, Henderson would make inside-to-outside diagonal runs to support Salah. 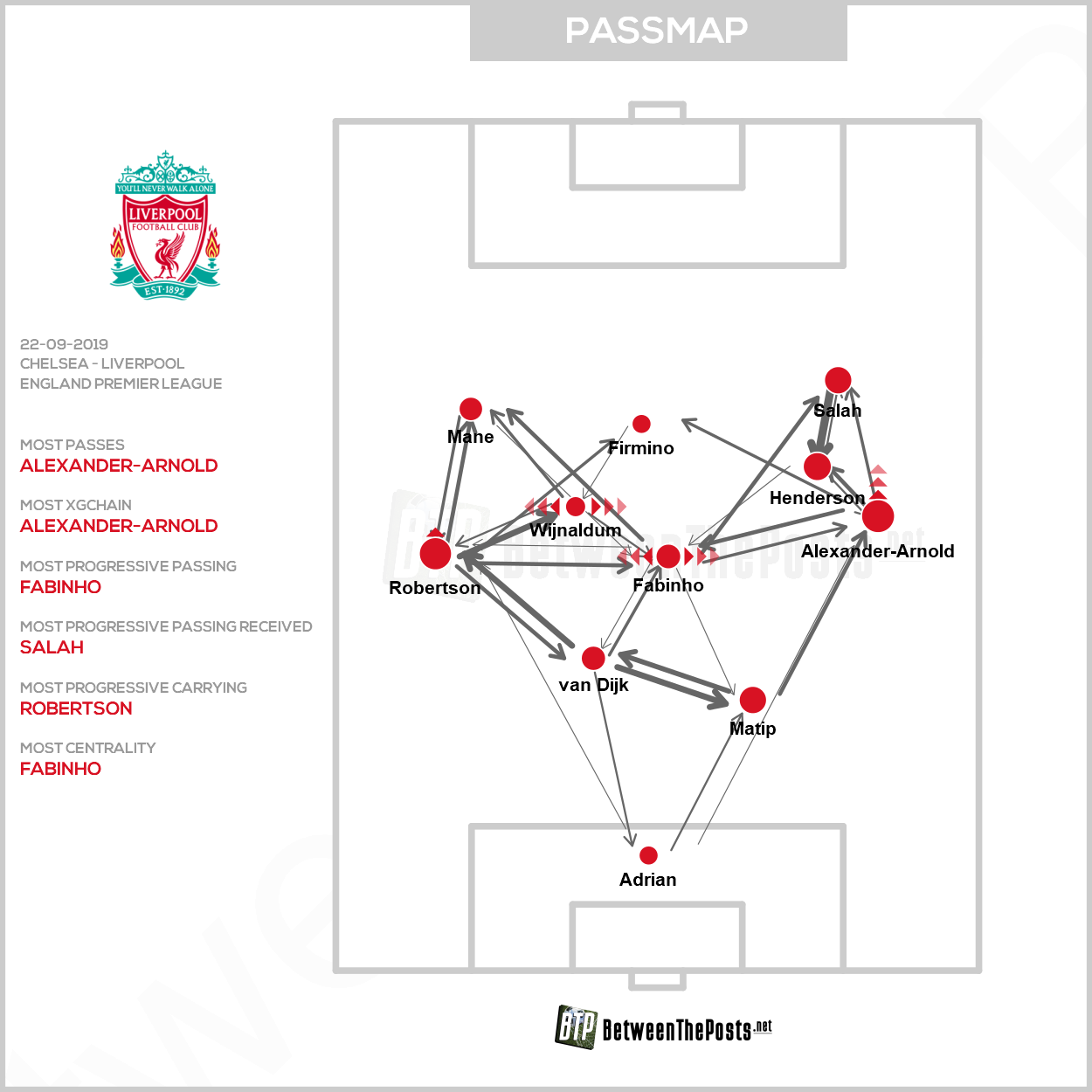 Chelsea themselves defended in a relatively compact 4-3-3 / 4-5-1 formation, which could sometimes form 4-4-2 variations when Kanté or Willian pushed out of the midfield line to press. Like Liverpool, Chelsea tended to focus more on defending the center in a relatively compact manner, so the outlet in buildup for Liverpool was often the fullbacks.

From here the fullback would often look for diagonal passes into the feet of the forwards positioned between the lines. But Liverpool also often ended up looking for direct routes over the top of Chelsea defense, rather than playing through congested central areas.

What Liverpool did in open play was not what directly earned them their goals though. Their first goal came fourteen minutes in, thanks to Alexander-Arnold’s effort as the ball was rolled into his path from a free kick just outside the box. Their second goal came at the half-four mark, as Firmino found an uncontested header in the box after Robertson’s delivery from a wide free kick. 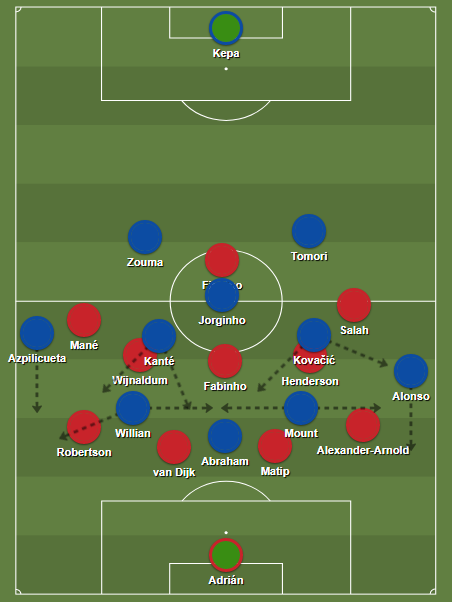 Chelsea with the ball in the second half.

As well as Chelsea going into the second half 2-0 down, Lampard also found himself with limited options to change the game. He had already had to use two of his substitutes in the first half as first Emerson and then Andreas Christensen both had to be taken off due to injury. They were replaced by Marcos Alonso and Zouma respectively.

As the half progressed, Liverpool were defending deeper and Chelsea took more control of the ball as they looked to chase the game. Chelsea were committing quite a high number of players ahead of the ball in their attacks. Both fullbacks, especially Alonso on the left, were pushing high up the pitch. Kanté made frequent forward runs into the box, while Kovačić mixed between dropping deeper in the left halfspace If you divide the field in five vertical lanes, the halfspaces are the lanes that are not on the wing and not in the center. Because there is no touchline like on the wing, players have the freedom to go everywhere. But this zone often is not as well-defended as the very center. This makes it a very valuable offensive zone to play in and a lot of chances are created by passes or dribbles from the halfspace. and moving into advanced areas.

Mount and Willian often moved into narrow positions between the lines, as well as occasionally rotating into deeper areas when the central midfielder on their side made forward runs. The key area where Chelsea were able to make progress though was with switches of play A pass from one side to the other. to the fullbacks against Liverpool’s narrow defensive shape.

Both fullbacks had a lot of space in wide areas, but the switches to Alonso on the left were especially fruitful, with crosses from there leading to decent chances for Mount and Michy Batshuayi who came on late in the game as Chelsea’s only remaining substitute. Both were unable to convert their chances though.

This meant that N’Golo Kanté’s moment of inspiration to get Chelsea back into the game just after seventy minutes would end up being Chelsea’s only goal of the day, as Liverpool ran out 2-1 winners, able to hold onto their lead despite pressure from Chelsea late on. 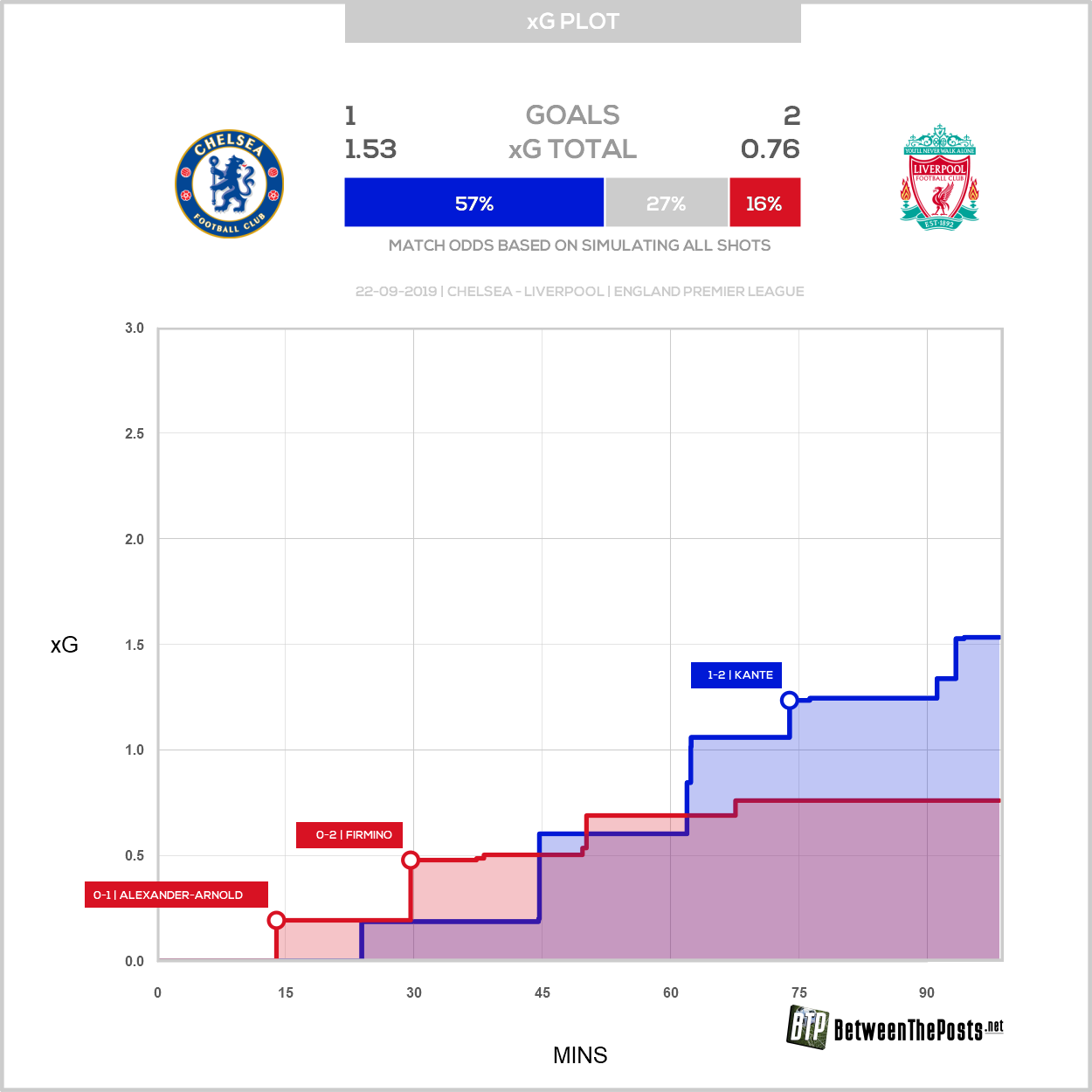 Relative to the expectation levels for both teams, Chelsea should not be too disappointed with the overall performance. Liverpool were generally on top to start with, but did not create huge amounts from open play and Chelsea came back into the game fairly strong in the second half.

Liverpool were able to continue their winning run in the Premier League, demonstrating an ability to get results out of games without necessarily playing at their highest level. That being said, Chelsea did threaten, and the way in which Chelsea were able to find space in advanced wide areas with little pressure in the second half may be something worth looking at for Klopp. 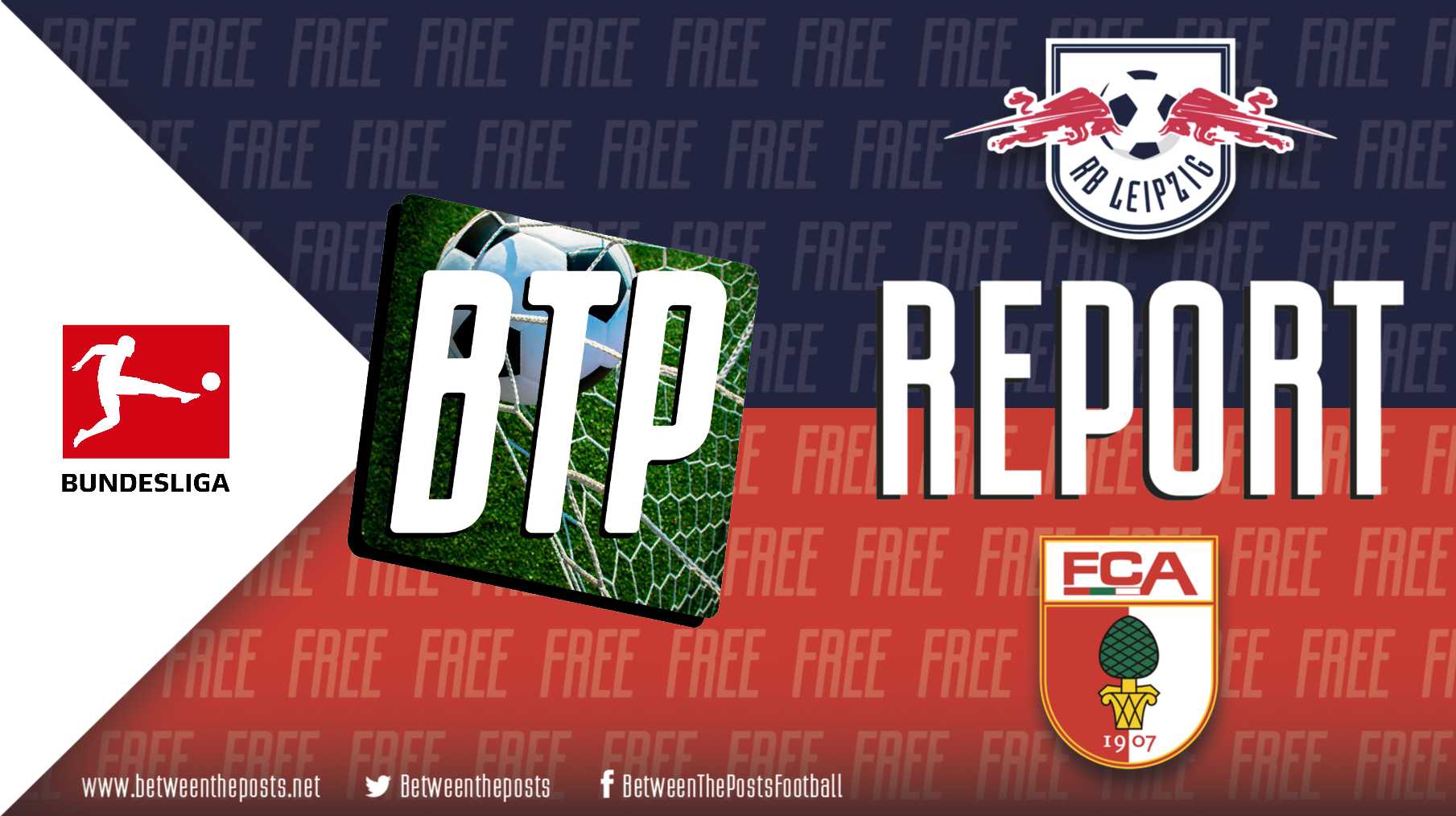