Welcome to the weekend primer of Between the Posts, where we preview the matches that will be covered during this weekend, including a little preview of these matches. We have a true cracker in the Premier League, three derbies and a tactical clash in Germany.

In the business end of the season, the best clashes are often found at the top and near the bottom of the table. We therefore selected a 17th meets 14th clash in the Bundesliga. Newly promoted Nürnberg hope to retain their status of Bundesliga club, while last season’s runners-up Schalke ‘04 have seen this season go totally pear-shaped.

Nürnberg’s promotional campaign last season was driven by excellent defensive numbers and this season’s 53 goals conceded is by all means reasonable for a promoted side. This gets even more impressive when you think that forty per cent of these goals were shipped in four away matches, at Borussia Dortmund (7-0), at RB Leipzig (6-0), at Schalke (5-2) and at Bayern (3-0). Offensively, Nürnberg fall short as none of their players has scored more than four goals, with Mikael Ishak and Hanno Behrens falling way short of last season’s production in the 2. Bundesliga.

Schalke ‘04, despite comfortably having beaten Nürnberg in their earlier matchup this season, go into this game with much to lose. Just five points separate them from the threat of 16th place and the associated relegation play-offs. Manager Huub Stevens, who took over after the dismissal of Domenico Tedesco, won’t take much confidence from three home losses in their first four matches under the new man.

Safe to say there is a lot at stake in this Friday night encounter. 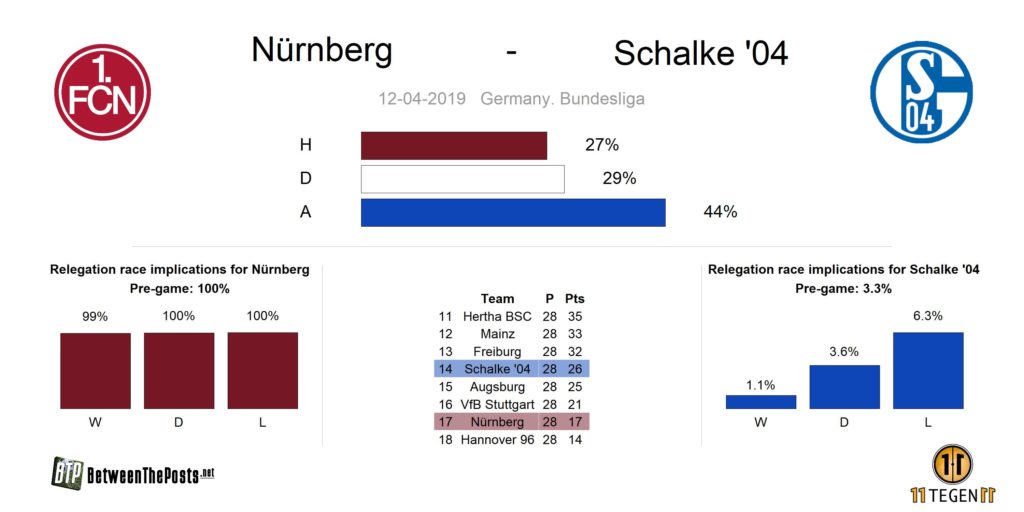 This is the last straw for Lazio Roma to save their season. If they lose this match against AC Milan, they will probably sit eighth in the Serie A table and then it is probably game over.
Last weekend against Juventus, Milan showed some decent ideas, especially in possession. Their buildup was brave and the way they defended all the crosses whipped in by Juventus was commendable. Gattuso’s 4-3-3 formation keeps having the same problems in terms of creating offense consistently and their play in the final third The one-third of the pitch that is closest to the opposition’s goal. often is predictable.
A 3-5-2 formation meeting a 4-3-3 shape is always fascinating, because there will always be certain spaces that open up, for both sides. 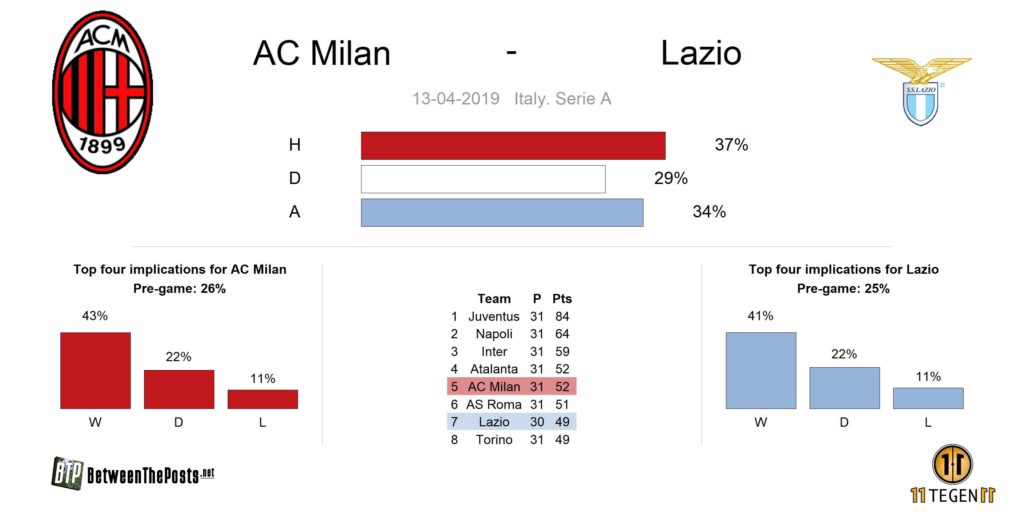 Derby time! During matches between these two clubs, the stadium always seems to light up. The atmosphere will be a bit different than normal however, since this is the first time the crowd has a chance to greet manager Joaquín Caparrós since he was diagnosed with a form of leukemia.

Under Caparros, Sevilla play in a 4-4-2 formation, with Wissam Ben Yedder and Munir up top. Off the ball, this becomes a 4-4-2 or 4-4-1-1 shape, which makes them less vulnerable defensively.

Real Betis Sevilla in away games this season… Not great, Bob! In a more extreme form, they suffer from the biggest weakness in their game: possession for the sake of possession, without actually creating chances. On the other hand, this is hardly an away match, is it?
What we can expect this Saturday evening is a lot of possession for Betis, a lot of possibilities to counterattack and a lot of vigorous tackles. Try to watch this, as it often turns into an intense battle. 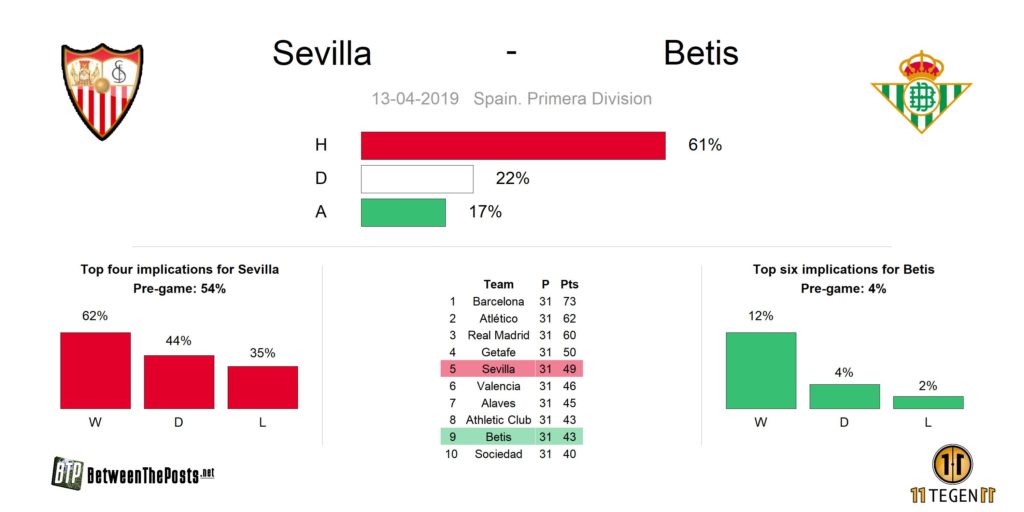 In the aptly named the Derby della Lanterna, Sampdoria and Genoa fight for the bragging rights in the old port town of Genoa. History sides with Genoa, Italy’s oldest football club. The present league table sides with Sampdoria, whose name fuses the clubs that merged in 1946: Sampierdarenese and Andrea Doria.

Theoretically, Sampdoria could still qualify for European football. However, they will need to make up four points on Lazio and Torino, and six to seven on one of Roma, Atalanta or AC Milan. By all means, this seems too much to ask. Well, on to beating city rivals Genoa then, and settling firmly in the top half of the table.

Genoa lost their biggest asset over the winter break, as striker Krzysztof Piątek transferred to Milan for some 35 million euros. Genoa promptly lost to Milan in the first match after the season restart, even though Piątek did not yet feature for his new club. In a bleak season with the club on course for a lower mid table finish, the Lighthouse Derby is probably the biggest match still on the cards. 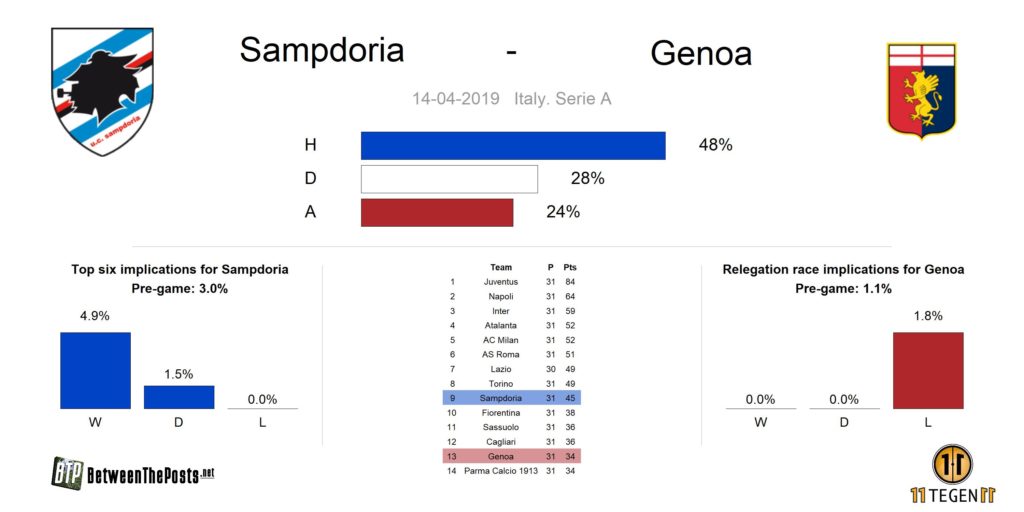 In terms of style and tactical theory, this is a perfect matchup for Liverpool. They can sit back, form their famous 4-3-3 medium block, A medium block refers to a team that retreats in their own half out of possession, generally only disrupting their opponents some way into their own half. let Chelsea pass it around and wait for a moment to strike.

Funnily enough, in both direct confrontations, Klopp’s team has not yet won. At Stamford Bridge, an entertaining game of football ended in a 1-1 draw – remember that goal by Sturridge guys? – as Liverpool got a hold of possession and drew Chelsea back into a medium block. A Carabao Cup meeting featuring mostly squad players was won by Chelsea.

That was seven months ago. A long time in real life, let alone in the game of football. Since then, Maurizio Sarri saw his squad go over some severe form crises. For Liverpool, this is their 45th match of the season. Go figure.

Being less solid defensively compared to the beginning of the season, Sarri might revert to his approach against Manchester City in the Carabao Cup final, because he knows his team is to fragile to play in his preferred style against Klopp’s monstrous bunch of players. 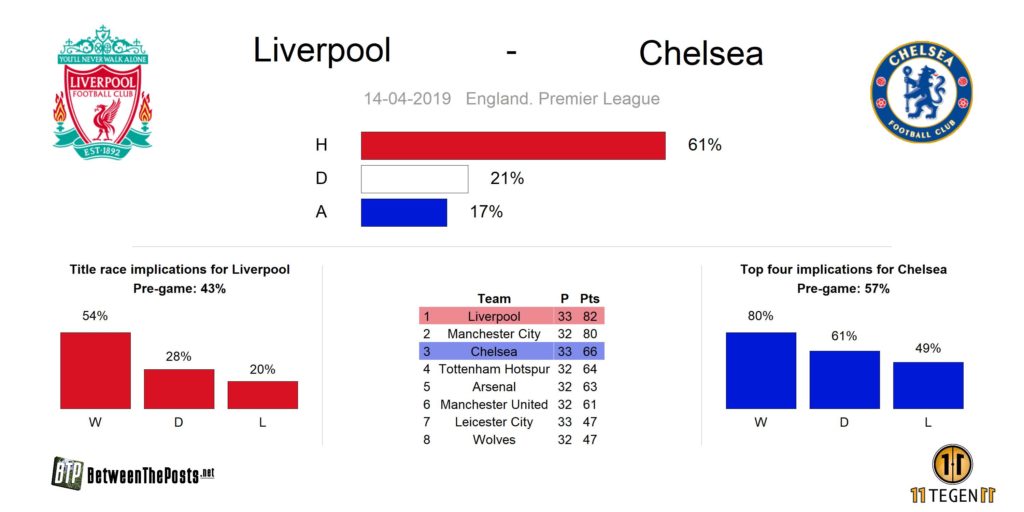 Ligue 1 is practically over, barring the contest for the European places and a nice subplot at the bottom, where three teams will hold a joust in the next few weeks, deciding who relegates directly and who goes into a playoff. If PSG win this match against Lille, they are officially champions. If they lose this, they will also be champions, but let’s not ruin the fun for ourselves just yet.

These are the two best teams in France; sorry Lyon. Even if there is no tension whatsoever in terms of who will win the league, it is still a fantastic game to watch. The fact Lille can boast the best defense in the league barring PSG and, in the form of Nicolas Pépé has the best attacker who’s not playing in Paris – once again: sorry Lyon.

Without the ball, Lille form a 4-4-1-1 medium block, and when they have it, midfielder Xeka often plays a pivotal role in feeding Ikoné, Bamba, Pépé and Remy on the break. A nice juxtaposition with PSG’s possession-and-pressing football. The away match against Lille is as hard as gets for PSG this season in France. Make sure you watch this game. 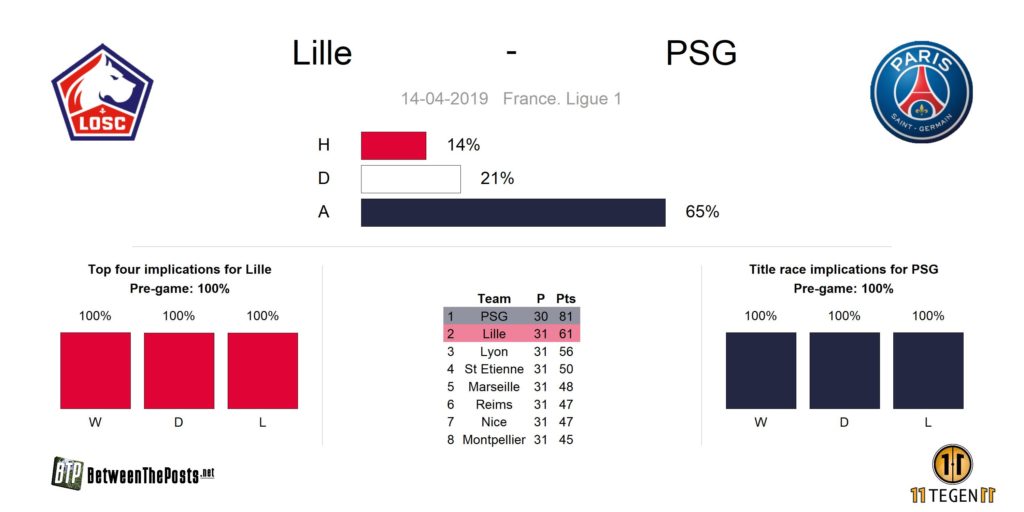 Cropped in between the Europa League quarter final matches against Napoli, Arsenal have a tricky Monday night away fixture in the Premier League coming up. Whatsmore, in a relatively benign run-in, playing away at Watford might even be the most challenging match remaining in the chase for an all-important top four spot.

Watford have surpassed preseason expectation by comfortably lingering in the top-half of the table, and being on course to finish anywhere between 7th and 10th in a close battle with Leicester City, Wolverhampton Wanderers and Everton. Offensively, Javi Gracia has impressed and thirteen goals scored in their last six matches, including trips to City and United, are a testimony to that. However, underlying numbers are way less impressive and it looks like much of their offensive optimism fails to find backing in terms of chances created. Don’t be surprised if this scoring spree tails off near the end of the season.

Scoring more than underlying numbers indicate is also the story of Arsenal’s season so far. In fact, Watford and Arsenal are the two teams with the biggest difference between actual and expected goals scored. Rather than simply saying ‘brace yourselves, regression is coming’, now is the time to watch closely to see how these offense operate to come up with such efficient conversion of chances. 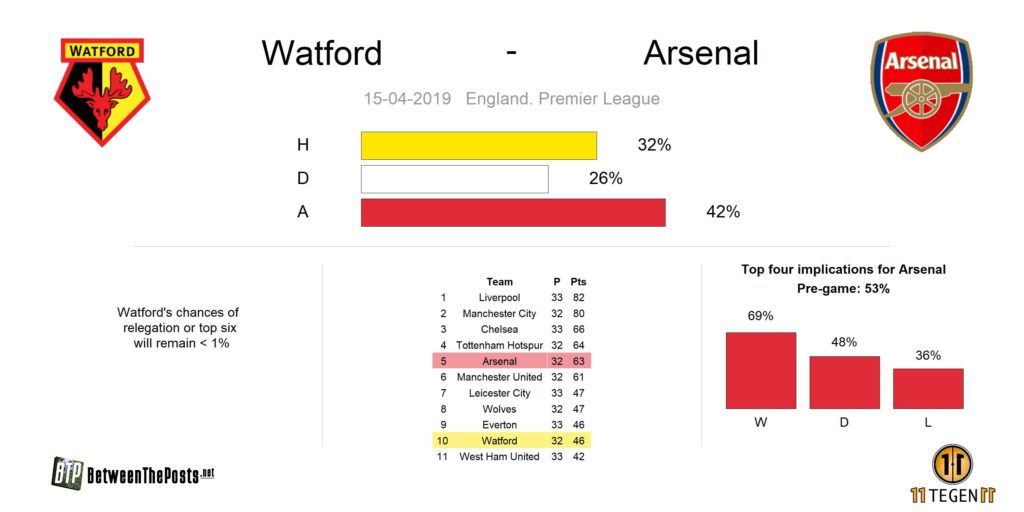 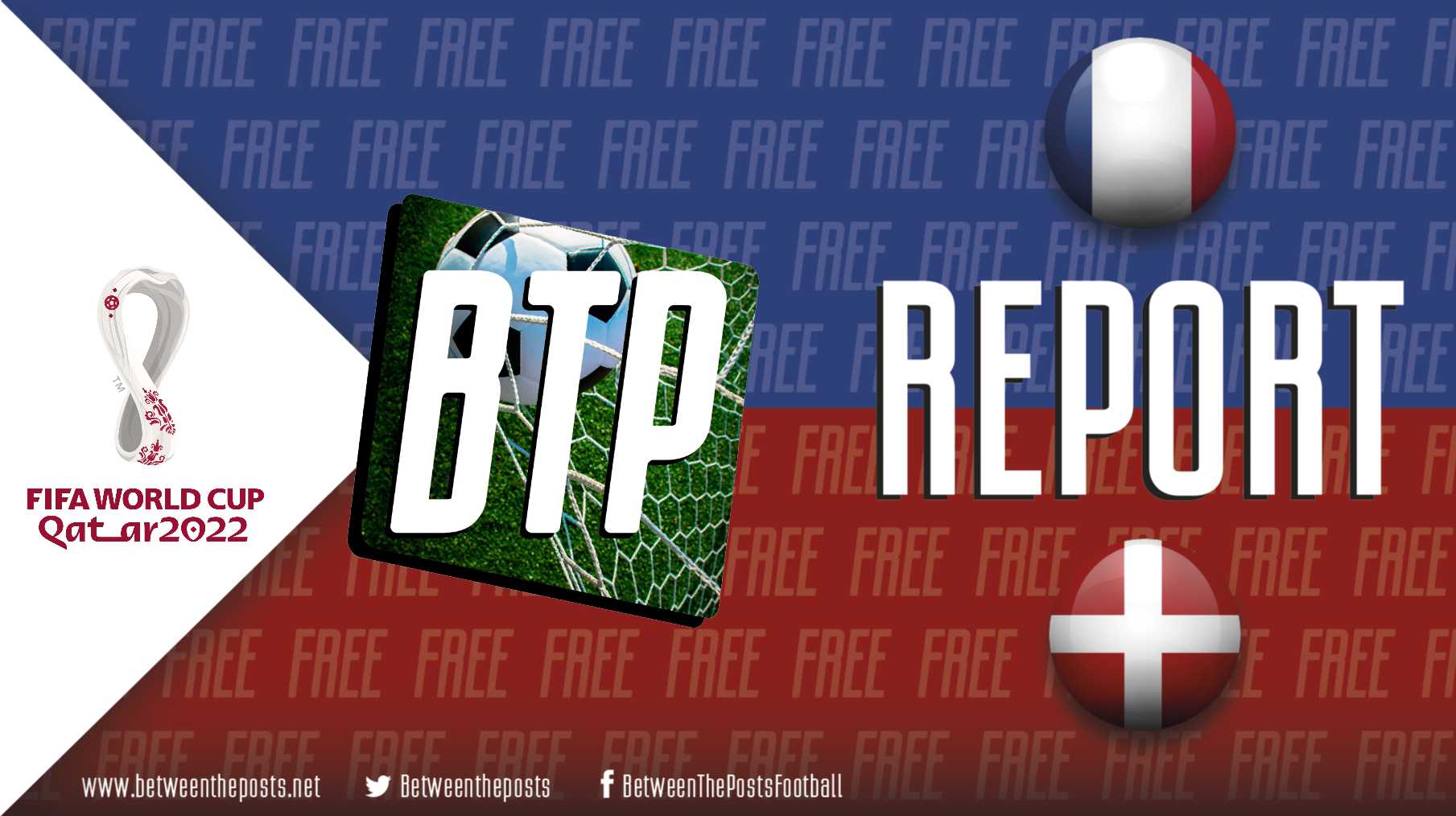 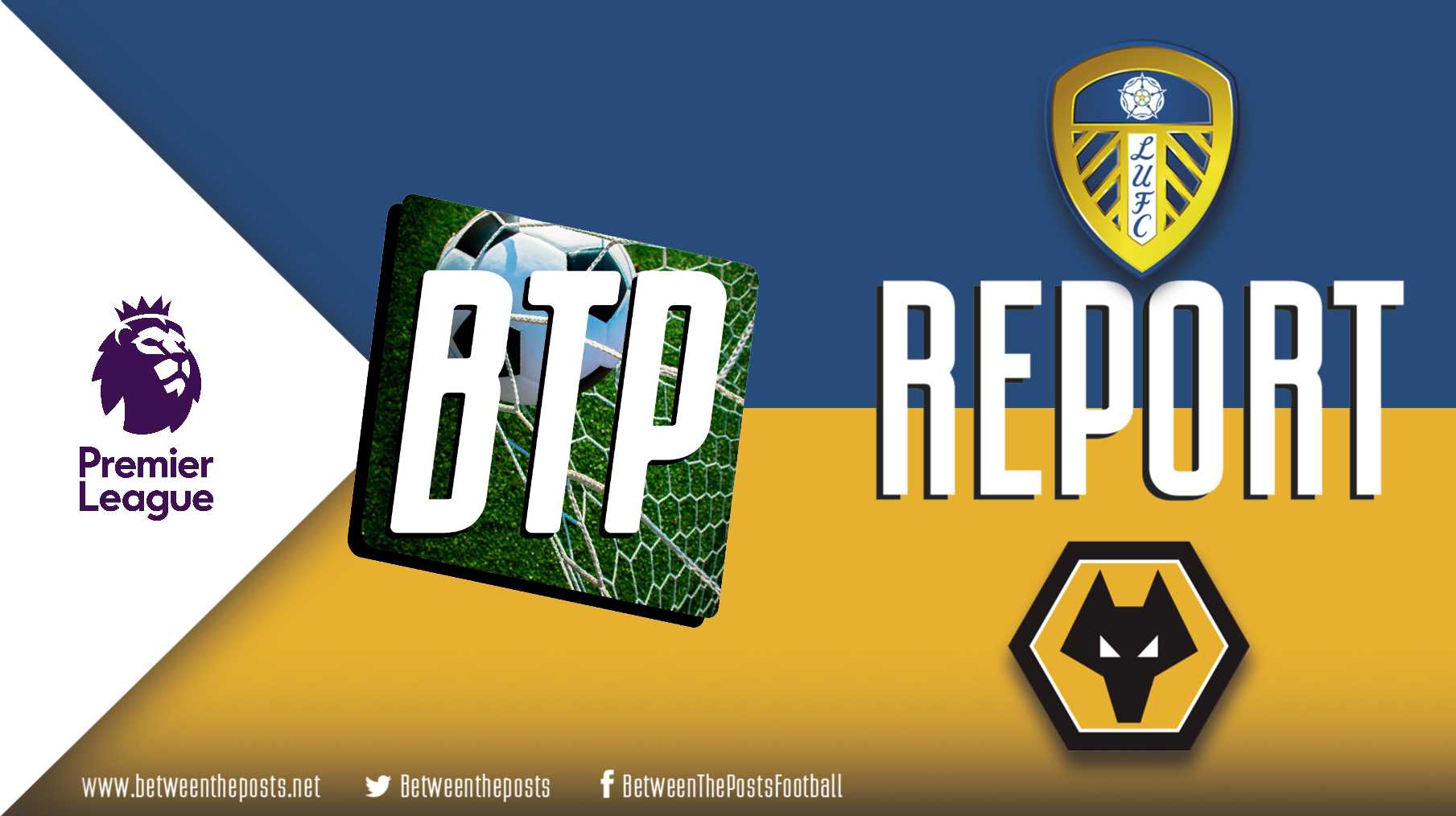