Thomas Tuchel and Antonio Conte may have adjusted to one another recently, but to do it again to this extent made it all the more surprising. Eventually, Chelsea found their stride and an effective double hit sealed important points.

How dynamics can dramatically alter within the football world. September’s first outing saw a clear divide between title contenders and mid-table outfits; Chelsea was irresistible by altering in-game, whilst Nuno looked out of his depth.

Chelsea has bested their London counterparts in recent League Cup fixtures – once again, it was Tuchel’s changes that came to the forefront, as a 4-2-2-2/5-3-2 hybrid shape picked through the Spurs block. However, their hiccups in the league, married by Conte’s Tottenham improving their form, resulted in a matchup with pivotal European stakes.

The hosts have spent the season looking up, but a collection of clubs have the time to potentially clip the heels of the Champions League holders. Tottenham lay in waiting, a win would take them five points from Chelsea, with three games left to spare. Conte’s return to Stamford Bridge posed the opportunity to drag his former team into the top four dogfight.

Both Tuchel and Conte had taken their modifications for each other into account with their lineups. Malang Sarr and Mateo Kovačić came into the team that drew to Brighton in midweek, with Sarr moving into the left-back position, having replaced Marcos Alonso and N’Golo Kanté.

Spurs made four changes, to the team who scored two goals at the death to comeback against Leicester. Steven Bergwijn scored both of those goals, rewarded with a start by replacing Lucas Moura in the team. Matt Doherty, Eric Dier and Ryan Sessegnon all came in, whilst Sergio Reguilón, Emerson Royal and Oliver Skipp were moved to the bench.

Both coaches not only changed their shapes but in their approaches too. One could have seen this match being picked out of 2020, with Frank Lampard’s basic buildup mered with José Mourinho’s passivity in the 4-4-2 formation. But with Tuchel and Conte conducting their teams from the dugouts, one has to see more ideas being formed from such a change to their usual structures.

Tuchel’s newest strange formation… might just be called a 4-3-3 in possession? #CFC

• Four defenders at the back,
• Jorginho lone six.
• Mount and Kovačić as central midfielders in the hafspace.
• CHO (not in the screenshot) and Ziyech extremely wide wingers.
• Lukaku 9. pic.twitter.com/56tkTJewJS

Chelsea’s formation switch can be best described as a 4-3-3 when in possession. César Azpilicueta and Sarr were passive fullbacks, beneficial in circulating the ball around the backline but never contributed in the final third. Mason Mount and Kovačić operated on the same line and were always positioned behind the Tottenham midfielders, with Jorginho as the lone six. Callum Hudson-Odoi and Hakim Ziyech functioned as wingers, positioned towards the touchline but with the ability to move onto their stronger feet, once play had developed towards the box.

With so many players between the defensive and midfield lines, and with only Jorginho in midfield supporting the four defenders, Chelsea’s neat circulation of the ball was not on display, but their dominance down the channels asserted the control and constantly produced balls into the box, especially down the right side of the field. 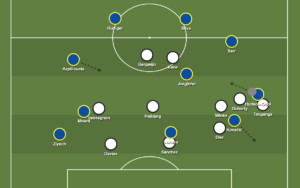 14th minute: Example of Chelsea’s circulation in the 4-3-3 formation. The winger would stay wide and receive deep, which would engage Tottenham’s fullbacks high up. To keep the midfielders towards the channel, Chelsea deployed runners in the halfspace and Jorginho consistently made himself a lateral option, with Azpilicueta also moving out to assist circulation.

Chelsea made progress against a Tottenham press which was more suboptimal. Matt Doherty and Ryan Sessegnon were responsible for pushing high on the passive fullbacks, but from very deep positions. This led to Japhet Tanganga and Ben Davies stepping far out to engage with Hudson-Odoi and Ziyech. With Mount and Kovačić making runs in the halfspaces, this led to Spurs midfielders being dragged and Chelsea could connect by combining with the run or through the overload created in the middle of the field.

When receiving on the left, Hudson-Odoi could be more passive on the ball, which benefitted Tanganga. On the opposite flank, Chelsea was consistently feeding their prime creators; Mount’s movements were more dynamic and not always detected by Pierre-Emile Højbjerg.

From these positions, Mount could either provide the cross on the run or, when the first phase slowed down, could move the ball back to Ziyech for an inswinger into the box. Chelsea’s form of attacks was from crosses, and only pulled one shot on target in the first period, from Ziyech himself, but Lukaku had decent opportunities around the box, as well as a header from Hudson-Odoi just pipping past the front post, from close range.

4-4-2 without the ball is one of the more amorphous/adaptable shapes you can use in your defensive organisation:

It’s in possession where you really need the right squad or “specialists.”

Spurs were incapable of hitting Chelsea with quick transitions or counterattacks, as they had no form of winning the ball back around the final or middle thirds of the field. Defending deep without offensive transitions makes your job difficult to pack a punch, ironic as this is how they had played under Mourinho for so long, in a similar 4-4-2 set-up.

As a result, Tottenham’s forms of buildup revolved around stretching the field with long balls. Either Harry Kane or Bergwijn sat high up on Chelsea’s center-backs, whilst Sessegnon and Doherty could move into more open space behind them. Utilizing this style relies on a lot more quantity and less about the quality, as these long balls led to throw-ins or the Chelsea defense being comfortable in dealing with these sort of balls without a Tottenham target man to hit the ball into.

It was the more broken and unique parts of play that led to Spurs gaining some progress, mostly from Harry Winks breaking out of his central position and carrying the ball into the space in front of Chelsea center-backs. The two occasions that this happened led to Winks taking a shot from the edge of the area, whilst both wingers were free on the outside and Sessegnon being met with a run on the outside of Azpilicueta, but his ball across goal well overhit for Doherty to get on the end of. 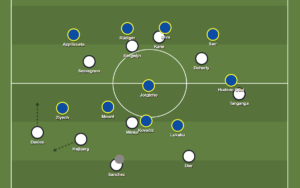 24th minute: Tottenham’s alterations out of the 4-4-2 shape, which saw Spurs return to three players in the defensive line and create more space for Sessegnon and Doherty on long balls, against Chelsea’s 4-1-4-1 out of possession.

After twenty minutes, the 4-4-2 shape that had been established could merge into an asymmetric 3-3-4 system, as Tanganga stepped up higher and Davies remained part of the defensive line. These moments saw more of a u-shape within the build, as Dier shifted his position behind Tanganga and Højbjerg stepped into the defensive line to connect and allow Davies to push further forward.

Nevertheless, the aims in possession were the same and Chelsea’s defensive structure, which was in a 4-1-4-1 formation higher up, had a comfortable time in dealing with the Tottenham approach.

Both sides stuck to their altered systems, which continued to see Tottenham’s press struggle against Chelsea’s dominance down the channels. This ultimately led to space being created in front of the Spurs center-backs and out wide on the opposite flanks, it just needed a neat combination to truly bust the doors open. 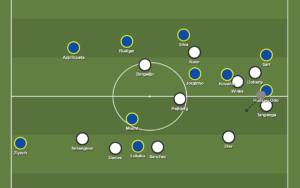 46th minute: Buildup to the first goal. With Winks engaged high up, space is created, once Hudson-Odoi has turned past Tanganga, to drive the ball towards a more central position and create space far side for Ziyech to receive.

Just before two minutes into the half, that moment would arrive. Hudson-Odoi flipped the switch, upon receiving the ball on the halfway line, to turn Tanganga and drive the ball into space, with Winks high up the field having engaged with Kovačić. Hudson-Odoi fed the ball into Ziyech, who had held his position to create space against a backtracking backline. Ziyech moved the ball to his left foot and arrowed the ball perfectly into the top corner, right on the postage stamp.

Chelsea only picked up the steam, as they continued to hit their opponents with vertical runs, outwards to inwards. When the ball was on the opposite flank, Mount was now a lot more central and this enabled Ziyech to float around his usual zones in space. Right after the first goal, Ziyech was met with an overlapping Azpilicueta run and although Mount’s shot was blocked, Ziyech fired the ball from a very similar area which firmly tested Lloris’ gloves.

Chelsea moved the ball more effectively and vertically within this period, as Tottenham had no solution in shutting down passing lanes and struggled in one-versus-one duels. Hudson-Odoi fed Mount in a similar manner to the first goal, after Mount freely received the ball behind Højbjerg. Mount’s shot from the edge of the area went just over.

Nonetheless, the second goal would shortly arrive as Hudson-Odoi continued to torment on the left side and a one-two with Kovačić led to Dier bundling him over. From the indirect free-kick, Thiago Silva connected with Mount’s delivery to take the game away from Spurs.

Conte changed the team’s shape immediately, as Tanganga and Sessegnon were replaced by Oliver Skipp and Lucas Moura. Spurs deployed a 4-3-3 formation and had the higher bulk of the passing count in the last half hour of the game.

Tottenham’s buildup was fairly basic, with little rotation and none of the up-back-and-through combinations being formed within the middle: one of the more common themes when Spurs have had the ball under Conte. A fruitless attack was kept alive by Doherty often being in space when entering the final third, as Sarr was pinned against Lucas Moura and Hudson-Odoi would only join the defensive line within the second phase of the Spurs attack. 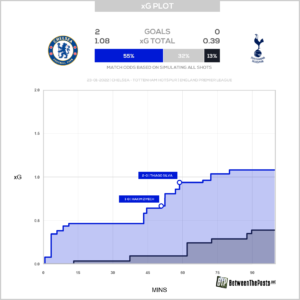 After raking up the highest recorded xG in a single game, this season, in midweek, a very quiet Spurs attack away at Stamford Bridge.

Tottenham had a couple of phases where the right pass would have led to a high-quality chance, one, in particular, was when Doherty’s diagonal run would have been met inside the box, and behind the defence, if the pass wasn’t overhit. However, just a measly three shots in the last half hour was not enough from a very Mourinho-ish Spurs performance.

Chelsea continues to look upwards, but keeping distance from those below them is a crucial task. In that case, this was an important win against a team who made a habit of leaving it late recently. Tuchel’s team are now poised for an actual break before the Champions League knockouts come into the frame. Though not at their potent best, this was a convincing win.

Once 2-0 down, chances of Spurs gaining points had certainly received its final nail in the coffin. Conte could do with reintegrating the likes of Dele Alli or Giovani Lo Celso into the set-up. However, if you reap the Conte rewards, one must rarely question his methods. 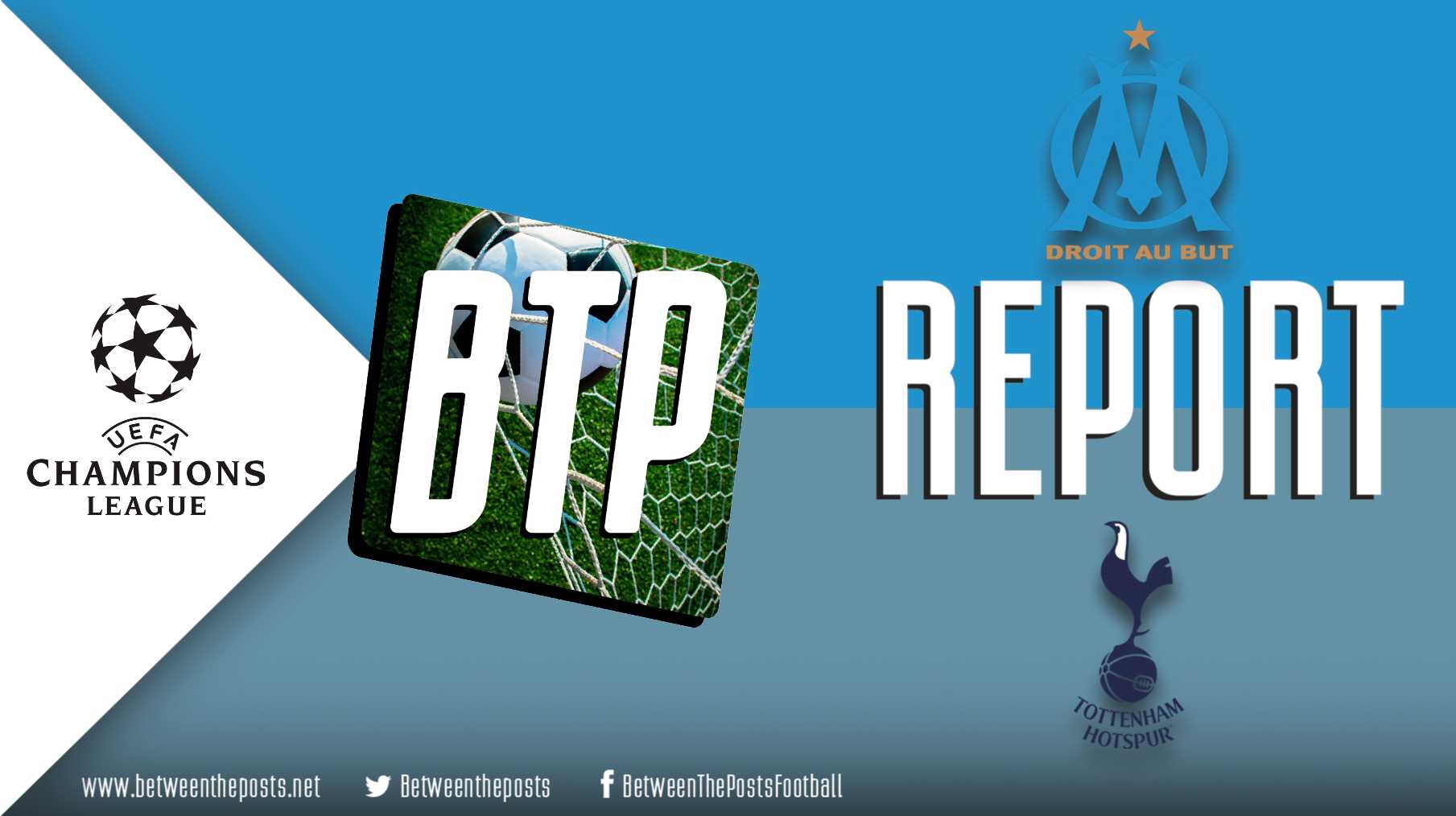