On the basis of the first half hour, Chelsea looked to win the Super Cup. But write off the Yellow Submarine at your own peril. The second face of the same coin proved far more troublesome to manage than the first, taking the game to the death, where an unfancied hero made his mark.

As the start of the season looms near, Chelsea have much reason for optimism. Thomas Tuchel’s arrival at the turn of 2021 provided the guile from the sideline to match the quality on the pitch, setting off an upsurge in form. A place in the top four, run to the FA Cup final, and glory in the Champions League final came soon after, leaving the Blues to dream of what is now possible. But getting ahead of themselves against their competitors in this duel could prove to be a fatal mistake.

Unai Emery has thrived under the tag of the underdog at Villarreal to revive his reputation. A win over former employers Arsenal took his side to the fina grl of the Europa League. Victory against Manchester United bagged his fourth and the club’s first success at that stage of the competition. Now facing the kings of Europe, could Emery’s men overcome the odds to claim a third English victim?

True to form, Tuchel set up his men in a 3-4-3 shape. The manager picked the same starting eleven that started in the side’s last preseason friendly at home to Tottenham Hotspur. To this end, Trevoh Chalobah featured on the right of the back three behind Callum Hudson-Odoi, N’Golo Kanté joined Mateo Kovačić in the middle of the park, and Hakim Ziyech played on the right of the front three.

Emery’s selection of three fullbacks hinted at a surprise ploy. But, in the end, the manager went for a 4-4-2 system. Thus, Alberto Moreno played ahead of Alfonso Pedraza on the left of the four in the midfield. Further afield, a summer signing made his first competitive start for the club, as Boulayé Dia joined talisman Gerard Moreno upfront.

Chelsea in charge of proceedings

Emery banked on a low block in the Europa League against Manchester United, and he did so again in this game. But the identity that Tuchel has imposed on his outfit posed Villarreal a new task to solve.

On their right flank, Villarreal defended man-for-man. Yeremy Pino dropped back to track Marcos Alonso, creating more width in the backline. Even when the play was on the left side, he did not disconnect to shift with the other three midfielders. Juan Foyth then could step out and close down a member of the front three. 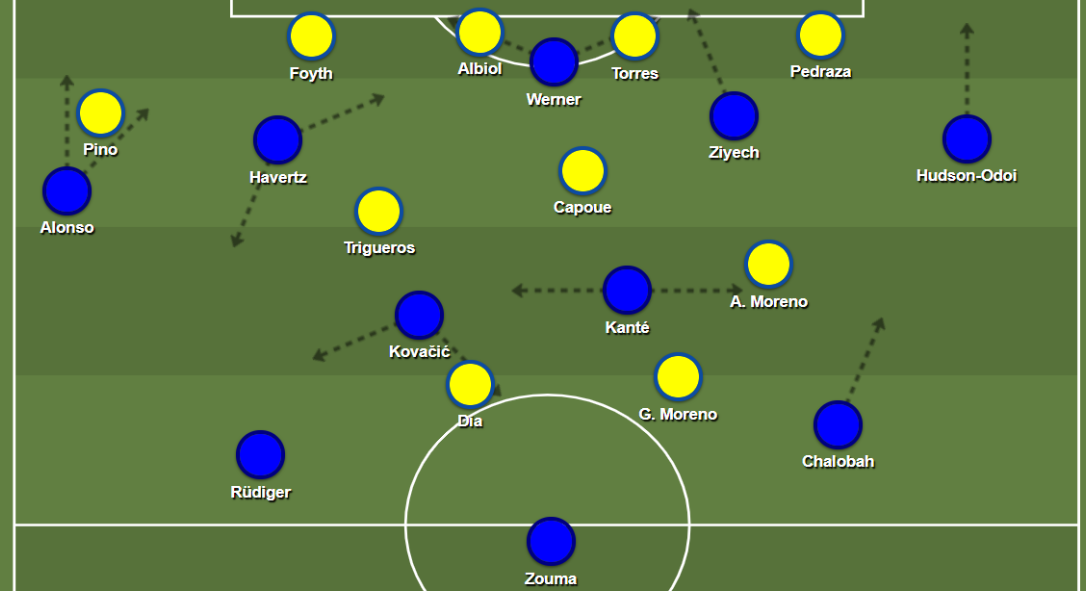 Though the immediate width and depth seemed to be under control, this approach led to issues. The lack of access to Antonio Rüdiger gave the defender space and time on the ball to look for options in depth. Thus, he picked out Callum Hudson-Odoi time and again from deep on the left, turning the Villarreal block as it stepped out from the box.

On their left side, Chelsea continued to occupy the last line with a variety of movements. As Kai Havertz or Timo Werner dropped off to drag Foyth out of the back five, Marcos Alonso frequently made diagonal runs inside to attack the goal. From the middle of the front three, Timo Werner again busied himself, making evasive runs out to the sideline to ask questions of Raúl Albiol.

While Tuchel’s men failed to create many chances, their dominance of the territory was evident. In addition to this, their ability to control the threat on the break shone through. The base at the back of three central defenders and the double pivot Two central midfielders next to each other. stayed tight to each other while moving up very high to close up the distances in the transition. Thus, Chelsea conceded no shots on goal in the first quarter of the game. Twenty seven minutes in, their control translated at last to an advantage on the scoreline.

Turning the play over in Villarreal’s half of the field, Tuchel’s men worked the ball out to Alonso. The wing-back then hit a pass down the line to Havertz, whose cutback flashed along the face of the six yard box. Werner attracted the attention of Pau Torres, handing Hakim Ziyech the chance to bury home. The in-form forward had scored once again.

To the misfortune of Ziyech, he succumbed to injury not long before half-time. Marking Foyth from a corner, a shoulder dislocation forced him off the pitch, leaving Christian Pulisic to take his place. But going into half-time, Chelsea were still in the lead.

Villarreal grow into the game

Living up to his reputation, Emery managed to swing the momentum of the contest during the game. His team emerged the stronger of the two after half-time, spending much more time on the ball. Here, Villarreal also used three at the back, as Foyth stayed deep on the right with the two central defenders. Pino and Pedraza would stay higher on the flanks, while Manu Trigueros and Alberto Moreno could offer deep width behind them. Dia then occupied the last line in front of a roaming Gerard Moreno.

Chelsea then set up off the ball in a 5-2-3 shape. The double pivot worked hard to shuttle from one flank to the other, while the wing-backs looked to shift out aggressively to stop Villarreal from gaining space out wide. Emery made various changes to counter this, both looking to his bench and adapting the roles of his men on the field.

One such adjustment came at around the fiftieth minute mark. Trigueros stayed inside to form a double pivot with Étienne Capoue. Moreno then began to roam more out wide to the right, while Pino stayed high ahead of him. The tweak fitted the profile of Gerard Moreno, whose passing into channels and comfort evading from central areas saw him become more of a presence in the final third. The one-third of the pitch that is closest to the opposition’s goal.

At sixty-five minutes, Tuchel made three substitutions. Kurt Zouma made way for Andreas Christensen, Jorginho replaced Kanté, and Mason Mount came on in place of Timo Werner. In turn, Havertz moved into the middle of the front three, allowing Mount to take his place on the left. However, the tide did not turn thanks to these changes, as Villarreal’s rising pressure finally told.

Gerard Moreno looked to slip in Pervis Estupiñán and failed to find his teammate, but the forward’s luck was in second time around. Picking up a backheel from Mario Gaspar, he found Dia inside the box. His strike partner returned the favor to the talisman whose effort then found the roof of the net.

It seemed as if Villarreal could go on to take the win altogether, but Emery thought otherwise. The Spanish outfit gave up the initiative, relying on a deep block for much of the rest of the game. Another tweak came to the fore in this block once Dani Raba replaced Dia. Raba oriented himself more to Kovačić, from time to time shifting the setup into a 5-4-1 formation.

Trailing, Villarreal started to gain momentum, created chances, pressed well when they didn't have the ball and eventually scored the equalizer.

After that... they stopped doing all of that, sat back deeper again and failed to produce a single shot in the rest of the game. 🤔 pic.twitter.com/DUAJTuqGBg

The game dynamic now mimicked that of the first half. No chances arose for Villarreal, some promising breakthroughs out wide for Chelsea. But killer instinct eluded the Champions League winners, causing the prospect of a penalty shootout to become all the more likely.

However, Tuchel had one more trick up his sleeve. His final change was a switch of goalkeepers, seeing Edouard Mendy make way for Kepa Arrizabalaga. Havertz missed the first effort of the shootout, forcing the substitute to prove his worth. He did just that, parrying a strike from Aïssa Mandi to make the scoreline all square. Ten penalties down, and the scoreboard read four apiece.

The shootout continued, leading to the center-backs having to step up. Rüdiger placed a strike past Sergio Asenjo, forcing Albiol to match his feat. But Kepa had other ideas, diving to his right to deny the central defender. Chelsea had come out on top. 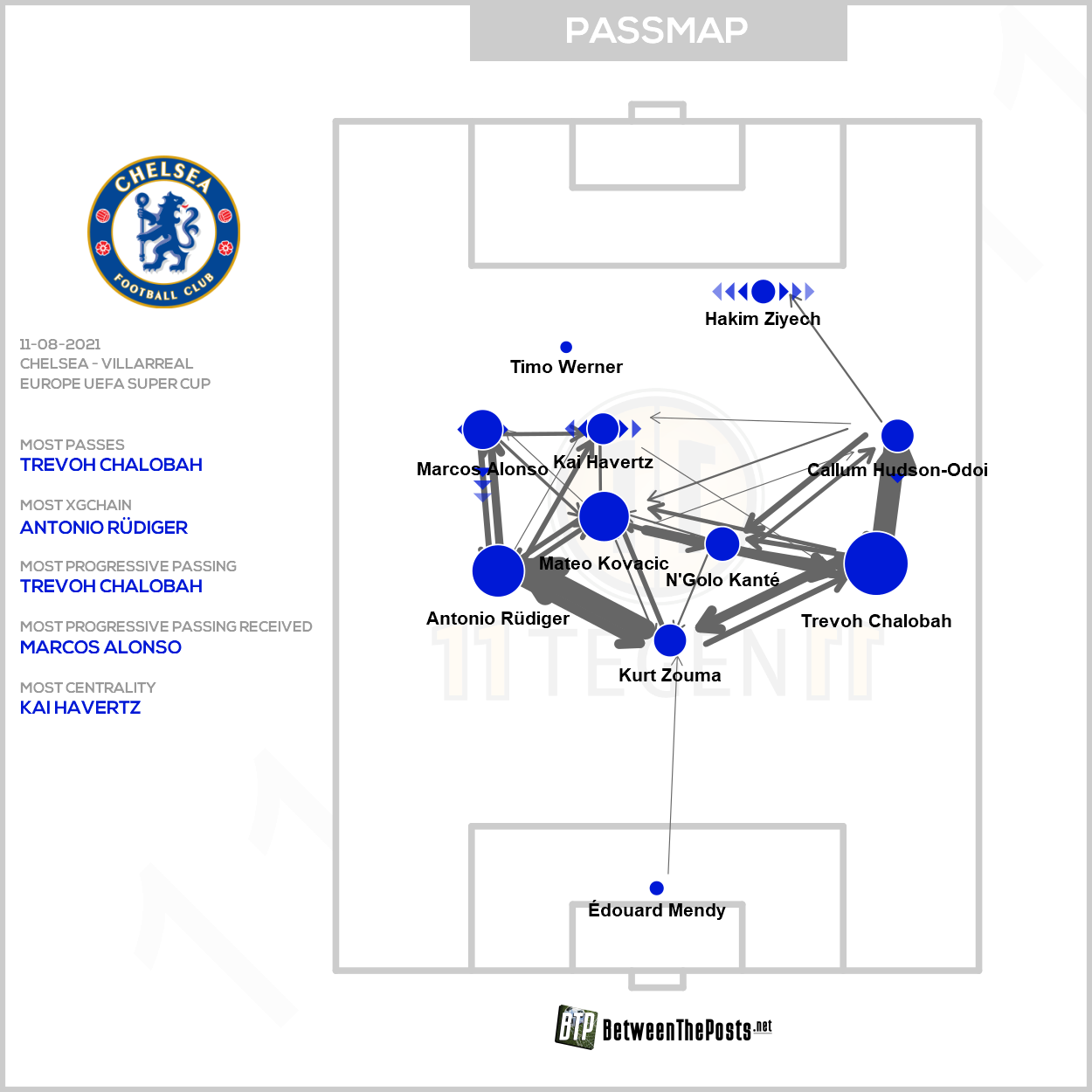 Chelsea carried on from where they left off last season. An imperfect but clear identity underpins the work of Tuchel’s men, who will look to compete on all fronts from the off. If Romelu Lukaku is the missing piece of the puzzle, the side will surely fancy their chances of going deep in Europe again.

Villarreal showed off two faces of the same coin under the pragmatism of Emery. On the one hand, they can adapt and force the issue against an opponent if a situation requires it. On the other hand, lies a willingness to allow the opponent to be the protagonist. How they wrestle with these two strategic faces could make the difference against the European elite as a Champions League campaign awaits. 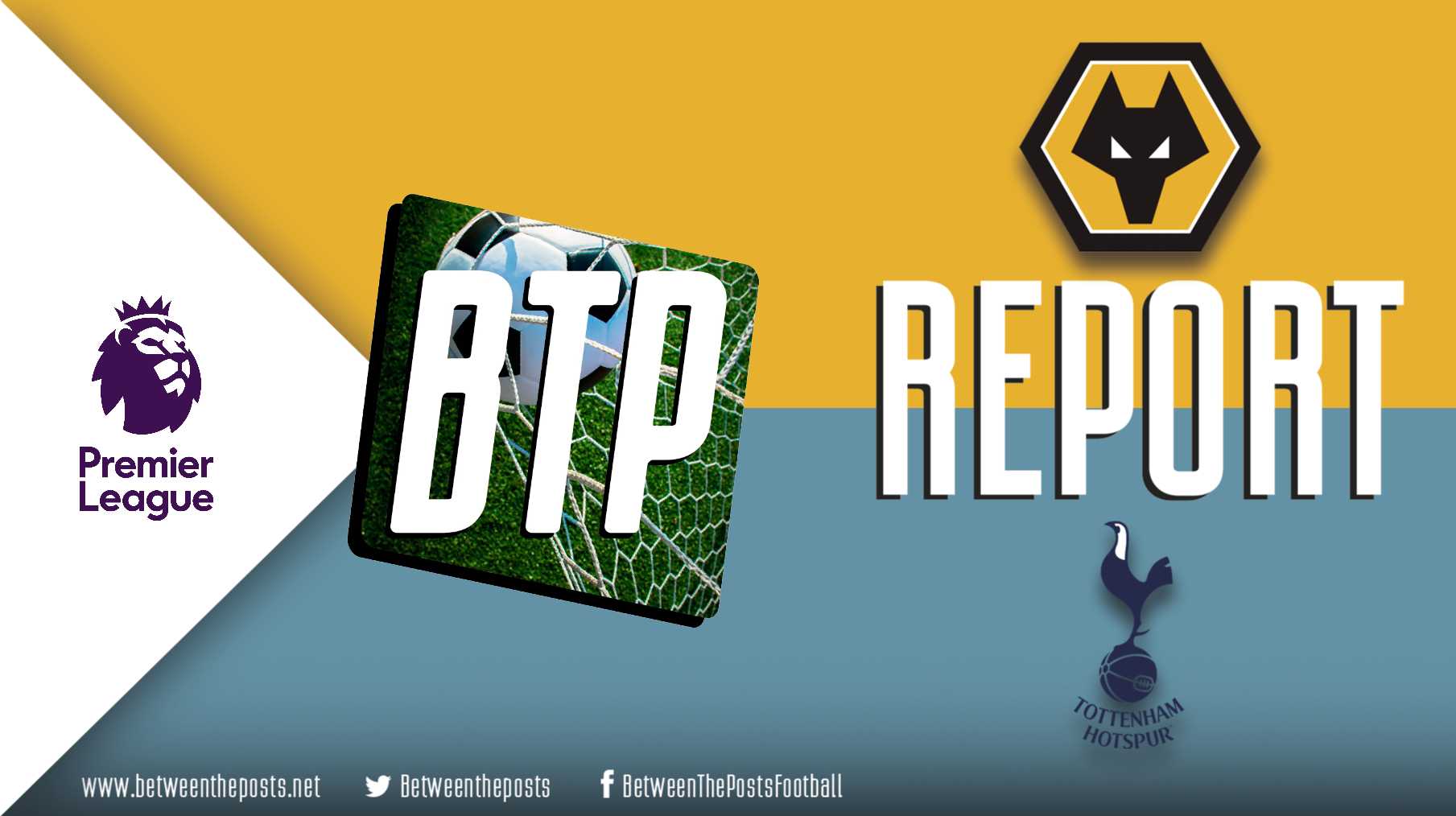