Welcome to the weekend primer of Between the Posts, where this time we take a slightly different approach. Instead of a match-by-match preview, we’ll preview the 2019 Copa América, kicking off this weekend.

This is part two of a three-part mini-series looking at the six major favorites going into the tournament. In this article, we look at the top teams from group B. Yesterday, we published an article on group A.

Lionel Messi has played at eight major tournaments with Argentina, reaching the final four times. During the 2018 and 2014 World Cups, Argentina were knocked out by the World Cup winner, in 2010 the team was coached by a madman and in 2006 Messi was not a starter. Yet his international career is deemed a failure by critics. Somehow, Ginzalo Higuaín misses chance after chance in decisive moments, the Portuguese striker Éder strikes in a ball from twenty yards out and we thus decide these finals are vindictive about the individual performances of Lionel Messi and Cristiano Ronaldo. Madness.

That being said, back to the Copa América of 2019, which might be one of the last chances for Messi to actually win something with Argentina, as he will be 34 years old when the next World Cup commences, a tournament shamefully appointed to Qatar, who are also participating in this group.

The World Cup in Russia ended in failure for Argentina, largely because manager Jorge Sampaoli insisted on playing Javier Mascherano in a midfield two, in a team that attempted to build from the back and press when the ball was lost. During that summer, reports came out of the Argentina camp that the starting eleven was not put together by Sampaoli, but by Messi and Mascherano. Sampaoli’s former assistant Lionel Scaloni is now managing the team. With Mascherano gone, it requires little guessing who is putting together the team now…

How to get the best out of Messi is always the first question when trying to construct a viable tactical approach for Argentina. Scaloni has been brave enough to already confirm his starting eleven for Argentina’s tournament opener against Colombia, which gives some insight into the choices the young manager and his captain have made. 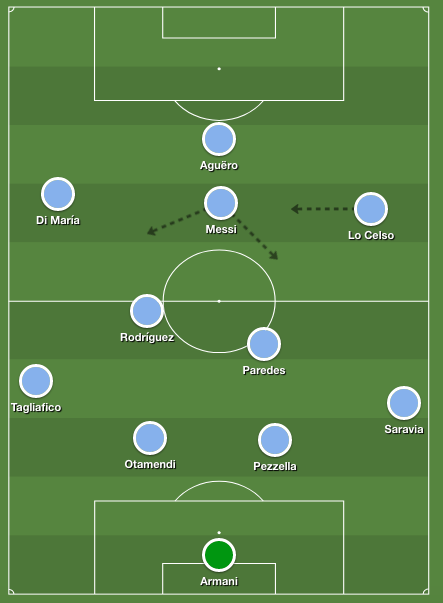 Since his best position is inside right, Messi traditionally plays best with players that are smart enough to vacate the spaces that are left open while Messi roams freely. Giovanni Lo Celso is predicted to come off the right in a role that is more or less drawn up to supplement the number ten. It is not too far off Lo Celso’s role as number ten in Real Betis’ 3-5-1-1 shape, in which he is also constantly probing for space between the lines in accordance with a traditional center-forward and a roaming advanced midfielder in the form of Canales.

This could also be a 4-3-3 formation however, with Paredes as the lone holding midfielder and Lo Celso and Guido Rodríguez as the slightly more advanced eights. Meaning there would be even more pressure on Messi to create.

Formation choices and the attackers aside, there is a lot not to like about Argentina’s defense. Goalkeeper Franco Armani can be called mediocre at best, left back Tagliafico offers little going forward, the center-back pairing Pezzella and Otamendi has been inconsistent, while right back Renzo Saravia does not have any experience outside of Argentina’s Primera División.

What we will probably end up seeing is loads of defensive mistakes, incoherent buildup play, and flashes of brilliance by Di María, Messi and Agüero that may or may not save the day.

Colombia and Argentina will probably progress from this group, which is completed by Paraguay and the aforementioned Qatar. The third-placed team of this group may advance as one of the two best third-placed teams. If that happens to Argentina, it will be considered as a shame for the nation, yet it is a comfortable safety net to have.

Colombia is the second-most populous country of South-America, with a population count just shy of fifty million. Even though that dwarfs the amount of people living in Uruguay (3.4 million) and to a lesser extent Chile (18 million), Colombia have not been able to put their mark on the Copa América from a historical point of view. They won it in 2001, reached the final in 1975, and that’s about it.

Their manager, Carlos Queiroz, has done about everything conceivable when it comes to coaching. Worked for clubs and nations from a staggering five continents in total, including two stints as head coach of his native country Portugal. Assistant to Sir Alex Ferguson. Manager at Real Madrid. Present at the last three World Cups. The journeyman Queiroz spent the last eight years in Iran, not only coaching the national team, but consulting on the way Iranian youth players should be trained and playing a part in innovating the national coaching courses as well.

Queiroz is seemingly opting for a 4-2-3-1 formation, which is the go-to formation in this edition of the Copa América, as it is the tactical system that is currently dominating international football. A lot of the players have been long present in this team; the expected starting eleven against will contain three of Colombia’s most-capped players in David Ospina, Radamel Falcao and Juan Cuadrado. 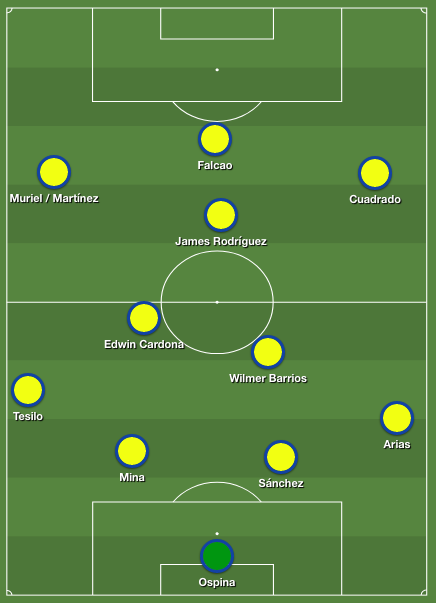 In central midfield and in central defense, the biggest questions can be asked in terms of quality. Their young center-back pairing of Davinson Sánchez and Yerri Mina are both employed in the Premier League. They are physically impressive and ruthless on their day, yet can also be inconsistent and prone to mistakes.

Ten to fifteen yards ahead, the suspected double pivot 4-2-3-1 is one of the most frequently occurring formations in football. The two most defensive midfielders are called a ‘double pivot’. pairing of Edwin Cardona and Wílmar Barrios is a gamble as well. They complement each other, as Barrios is more combative and Cardona more the playmaker, yet questions can be asked in terms of quality. They combine for a half season of European league football experience. In a competition that is dominated by players from Europe’s top leagues, it may be a tough ask for them to carry the team in a deep Copa América run.

Up front, we might be looking at tales of redemption from the star players. It will be interesting to see how much captain Falcao can squeeze out of his body after a horrible season at Monaco, while James Rodríguez lost his starting eleven spot at Bayern Munich and Juan Cuadrado had an injury-laden season at Juventus. Falcao cannot possible feel relaxed about his starting eleven spot, as he has the prolific Serie A striker Duván Zapata – who came off the bench to score in the final friendly before the tournament – breathing down his neck.

Once again, it is unlikely that Colombia will crash out of the group stage because of the way the Copa is structured; a deep run might be too much asked of the veterans up front and the talents at the back. 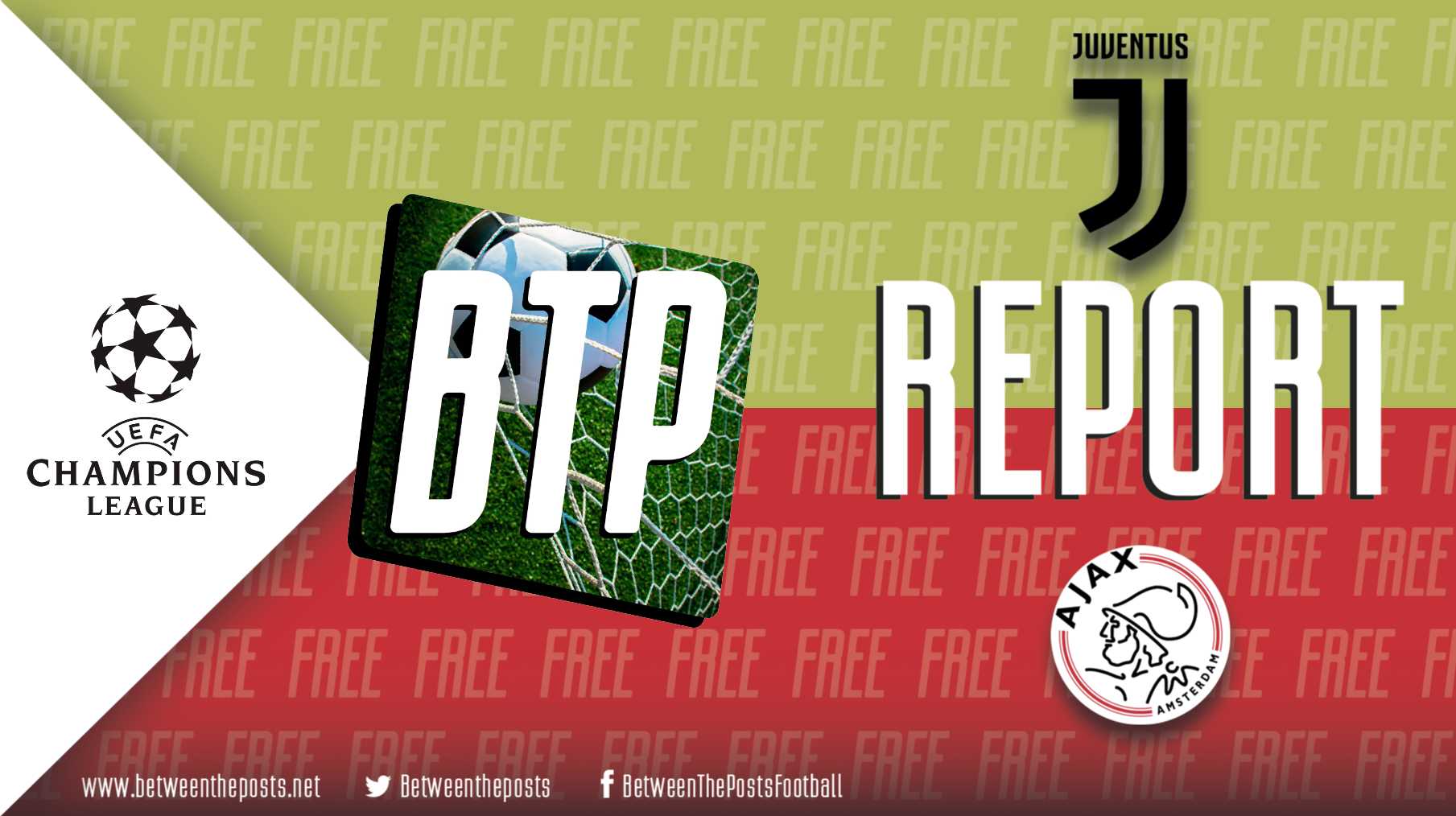