Jorge Jesus remains under pressure at Flamengo due to draw against Corinthians.

An overcast Sunday afternoon in São Paulo saw Corinthians host Flamengo. The visitors are chasing the title whilst Fábio Carille’s Corinthians have their eye on a Copa Libertadores qualification. A VAR influenced tie saw some beautiful football, late drama and a red card, with both sides sharing the spoils.

The Campeonato Brasileiro Série A simply pulls no punches. Jorge Jesus’ rip-roaring entrance to the touchline saw a 6-1 despatching of Goías, but a Copa do Brasil loss to Paranaense beckoned the Nação Rubro-Negra The Naçao Rubro-Negra, meaning Red and Black Army, are Flamengo’s core of die-hard supporters. to wait outside Galeo Airport, where star player Diego had to be held back by security to avoid a clash with his own supporters. Just another week in the life of Clube de Regatas do Flamengo.

If Jorge Jesus was William Shakespeare, then the pitch was his theatre. The fluid attacking football rigorously entertained the seventy-plus thousand that entered week in week out; however, a 4-1-3-2 formation with one proper central midfielder (Willian Arão) took more liberties than it did points – and that was the Naçao Rubro-Negra’s problem. Away from the Maracanã, a win was imperative if they were to keep with Palmeiras and Santos in the race for the Série A title.

It was interesting to see that Jesus had reverted to the usual 4-2-3-1 shape, with Gustavo Cuéllar and Willian Arão in a double pivot. 4-2-3-1 is one of the most frequently occurring formations in football. The two most defensive midfielders are called a ‘double pivot’. Arão, the more attacking of the two, would venture forward to support Diego. This change in formation was perhaps a sign of the pressure that Jesus was facing, and was an attempt to stabilise their position high up the table.

Corinthians manager Fábio Carille had guided his side to ninth place, using a 4-1-4-1 shape to make his side very hard to penetrate. This had been extremely effective, leaving them second in goals conceded behind league leaders Palmeiras (3). Goals had been hard to come by, scoring only eight, but Vágner Love is always a danger in front of goal.

Corinthians end half on top despite lack of possession

The first five minutes of the game must have been the best football Flamengo have played all season. Perhaps similar to Erik Ten Hag’s method of building up play, Jesus’ side were able to assemble attacks from the back through a combination of space creation and probing forward passes. Arão was a centerpiece in this; his manipulation of space via constant movement between vertical lines made him comparable to Van de Beek’s role in Ajax’s system, even though Arāo plays a bit deeper. This of course made for a pleasant watch. 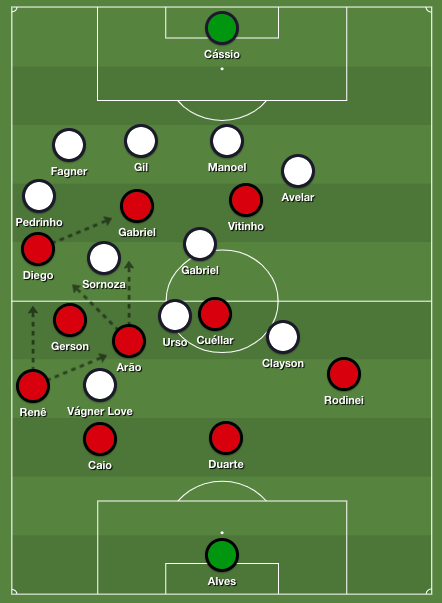 Some triangle that was!

It worked, but only for a short spell. Flamengo may have enjoyed a greater share of the ball, yet Carille had soon rescinded his side’s press and resorted to a controlled medium block. A medium block refers to a team that retreats in their own half out of possession, generally only disrupting their opponents some way into their own half. Corinthians had only conceded five goals all season and you could see why; the pragmatism of Carille to adapt his side to their opponent made them hard to break through. Soon enough, the home side were on top.

Their open play might not have been top class, yet Corinthians looked incredibly dangerous from set-pieces, with accurate placement from Clayson and well-timed runs causing havoc in the penalty area and testing Diego Alves. A bank of four attacked the ball whilst Vágner Love would peel around the back. The occasional long ball to the edge of the area kept Flamengo attentive but ultimately they were unable to successfully deal with the set-piece and the move would almost always end in a shot at goal. The half ended 0-0 but Corinthians were edging on top, despite having less possession.

The second half saw a slight change from Fábio Carille. Continuing with a medium block, the Corinthians manager allowed the front three to become more proactive in the press. This stopped Flamengo settling on the ball as they did at the beginning of the first half. The main tactical change Jesus made was to bring on winger Orlando Berrío and make his team play a bit more attacking by committing more players upfield.

The increased attacking duties backfired. A swift counterattack, led by fullback Fágner, caught Flamengo up the pitch, and a through pass to veteran striker Vágner Love set the Brazilian through on goal. Just as he was about to shoot, the backtracking Berrío brought him down. After consulting with the Video-Assistant Referee, referee Paulo Cesar de Oliveira pointed to the spot and booked Berrío. Clayson sent Diego Alves the wrong way and it was 1-0.

Following the penalty, Corinthians shut up shop. The medium block turned into a proper low block, led by Argentinian journeyman and former Wigan Athletic striker Mauro Boselli. It allowed Corinthians to keep the ball and slow the play down. In true Flamengo style, Jorge Jesus began to instruct his side to bombard the penalty area.

Chanceless and time running out, one could only imagine the riots on the streets of Rio de Janeiro should they lose again. Following a whipped corner, Arão’s guided header was palmed away by Cássio, but the 32-year-old could only hand it to Gabigol. The forward tapped it home. It took six pain-staking minutes for the Video-Assistant Referee to decide on the goal. In the end it was given, meaning Jorge Jesus was saved from the wrath of the Naçao Rubro-Negra. Well into stoppage time, Berrío ended his poor performance with a second yellow card. Ten men but a point away from home. 1-1. 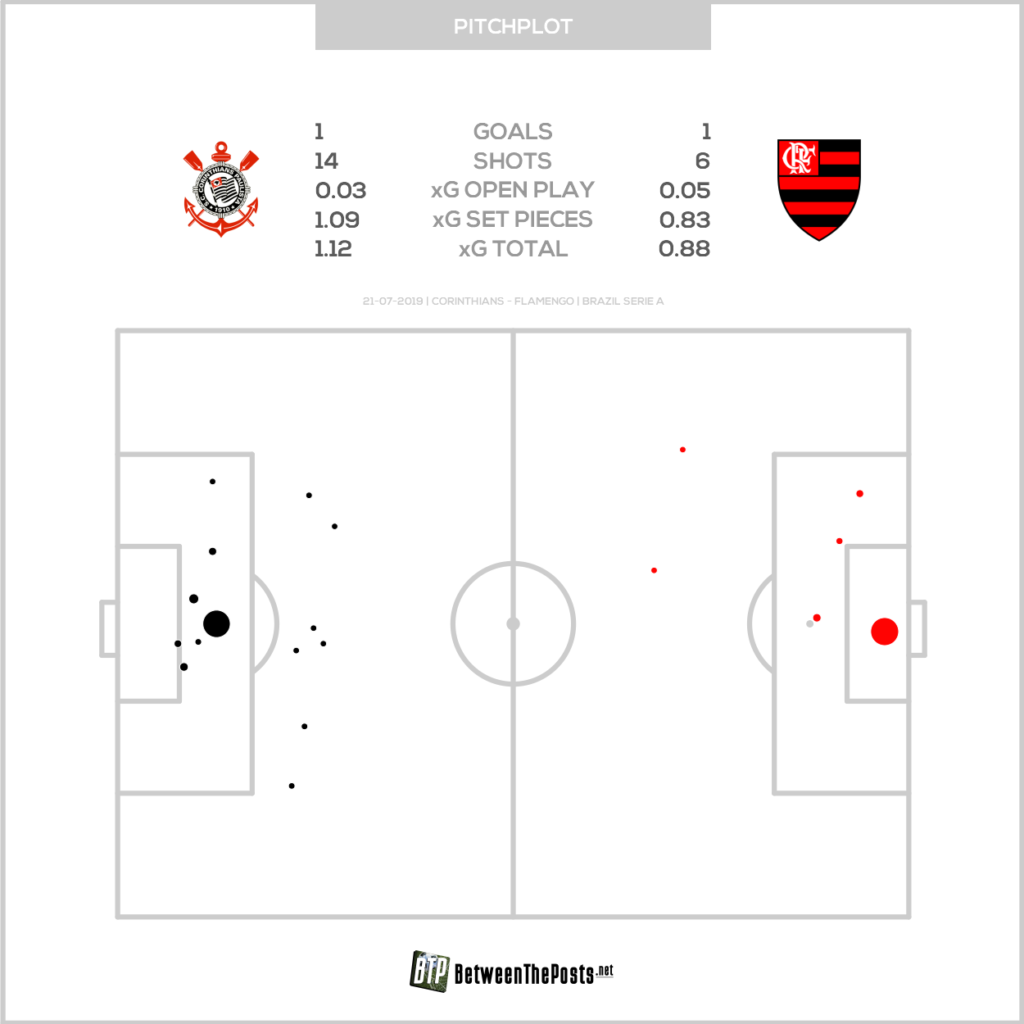 Flamengo’s fluid football was pleasing on the eye and successful in bringing play forward, however, they had to be able to keep it up for the entirety of the game if it was to be effective. All too often, Jesus’ side panics and resorts to long balls into the box. It saved him this time but soon enough his luck will run out.

Corinthians were once again structurally sound and had managed to maintain the lead for almost the entirety of the second half. Goals were still an issue but manager Fábio Carille could be happy with his side’s performance. Next up they face Montevideo Warriors in the Copa Sudamericana. Flamengo are also in cup action, this time the famed Copa Libertadores, where they face C.S Emelec. Crucial game that for Flamengo, considering the insane pressure they are constantly under.