Both Corinthians and Grêmio struggled in attack in different ways. The former failed to capitalize on initial advantages while the latter failed to create those initial advantages in the first place. Unsurprisingly, the pair’s offensive ineptness led to a fairly uneventful draw, which did not help both teams to overcome their early season worries.

The Campeonato Brasileiro is upon us and the table has already begun to shape up in interesting ways. By the third matchday, Grêmio, the fourth-placed team in 2018, sat in the relegation zone with only one point to their name. They were defeated by Santos 2-1 in the season opener, managed a 1-1 draw against nineteenth-placed Avaí, and lost a 5-4 thriller to Fluminese. Consequently, fans were hungry for a good result and were looking for a response against Corinthians.

Unlike Grêmio, Corinthians had a decidedly poor 2018 season, coming fourteenth in the table – only two points off the bottom four. Their 2019 season did not start off much better, as they squandered three points in a 3-2 loss to Bahia. But they quickly rebounded with a close win over Chapecoense and a draw with Vasco da Gama. Thus, based on form, it did not appear that Grêmio would be able to pick up an easy away victory.

The managers of both teams instituted heavy rotations for the fourth matchday of the Brasileiro. Renato Portaluppi, manager of Grêmio, was forced into this due to a Copa Libertadores game on Wednesday. Against Corinthians, he organized his new eleven into a 4-2-3-1 formation. André started up top, ahead of Everton, Luan, and Walter Montoya. Matheus Henrique and Michel formed the double pivot, 4-2-3-1 is one of the most frequently occurring formations in football. The two most defensive midfielders are called a ‘double pivot’. which shielded a defense consisting of center-backs Geromel and Walter Kannemann and fullbacks Juninho Capixaba and Leonardo Gomes. Paulo Victor kept his place in goal.

While Portaluppi’s hand was forced, Corinthians’ manager Fábio Carille had choices. His team had a clean bill of health and his previous match had occurred a week ago. Perhaps unhappy with his side’s performance versus Vasco da Gama, Carille still decided to make sweeping rotations. He formed his eleven up in a 4-1-4-1 structure, with Mauro Boselli leading the line. Behind him, were wingers Clayson and Mateus Vital and central midfielders Junior Sornoza and Ramiro. Ralf anchored the lone defensive midfield position ahead of fullbacks Danilo Avelar and Fagner and center-backs Manoel and Henrique. Cássio started between the sticks.

Grêmio tries and fails to play between the lines

The opening stages of the game were characterized by Grêmio’s monopoly over possession and attempts to penetrate Corinthians’ 4-1-4-1 defensive structure. A defensive block is the compact group of defenders that defends a particular zone, either their own half in a medium defensive block, or the zone around their own box in a deep defensive block. 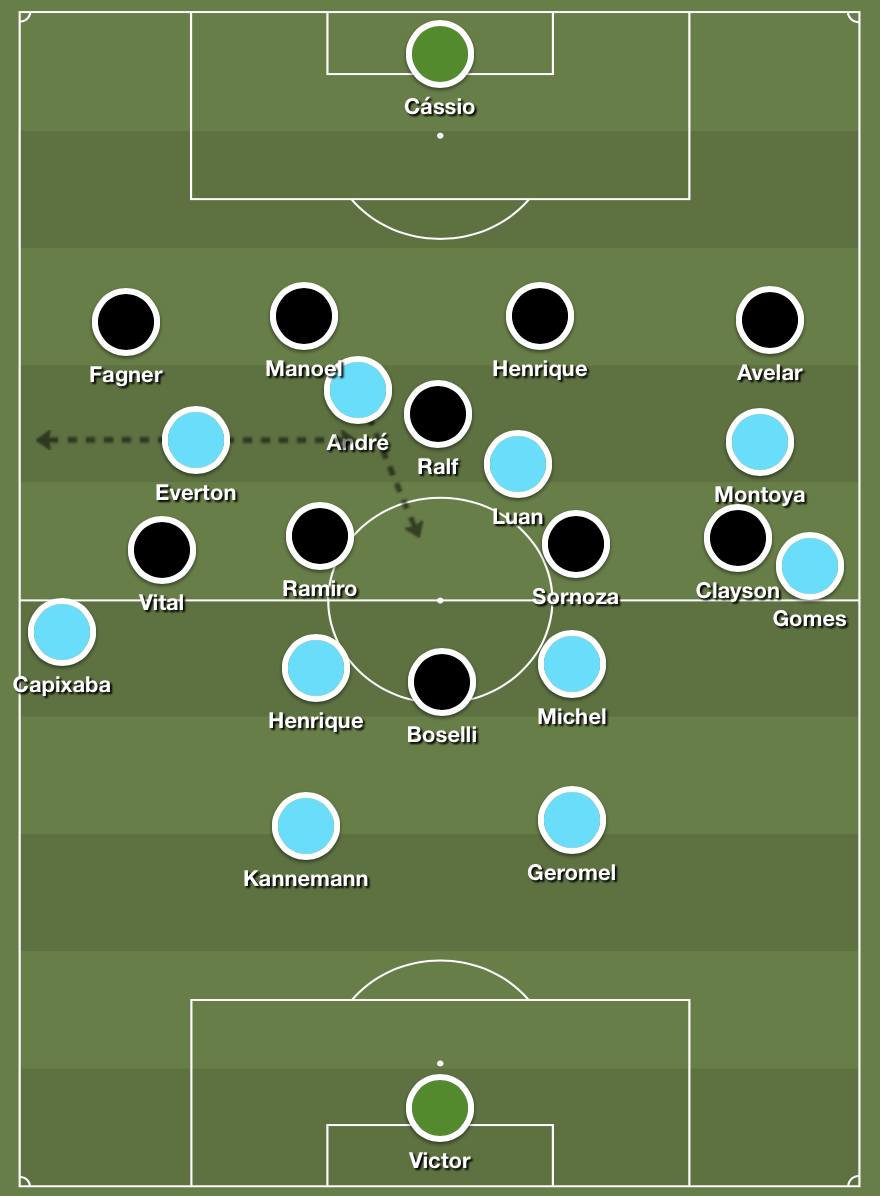 Portaluppi’s men tried to do so by having left winger Everton, striker André, and attacking midfielder Luan roam between the lines. Henrique and Michel were tasked with receiving the ball in front of Corinthians’ medium block A medium block refers to a team that retreats in their own half out of possession, generally only disrupting their opponents some way into their own half. and trying to find the aforementioned attackers.

Grêmio’s strategy was good in theory, but required support from a wider set of collective mechanics to be successfully executed. This is because opposing teams will be able to quickly identify attempts to play between the lines and will react by squeezing inwards and blocking off passing lanes to the center. In order to access attackers between the lines, Grêmio needed to find a way to draw defenders out of position. They could have tried to bait central midfielders Ramiro or Sornoza out of position by having Henrique and Michel dribble forward, or Grêmio could have tried to disorganize Corinthians by shifting the home side back and forth along the width of the pitch.

Grêmio did neither and instead waited and hoped for an opening to appear, leading to risky passes that were intercepted and converted into counterattacks. They only got close to scoring twice. Both chances came near the end of the half, when VAR overturned an initially awarded penalty and when they hit the post off of a direct free kick.

Corinthians have the right idea but struggle to execute

After ten to fifteen minutes, Corinthians began to enjoy their share of possession. 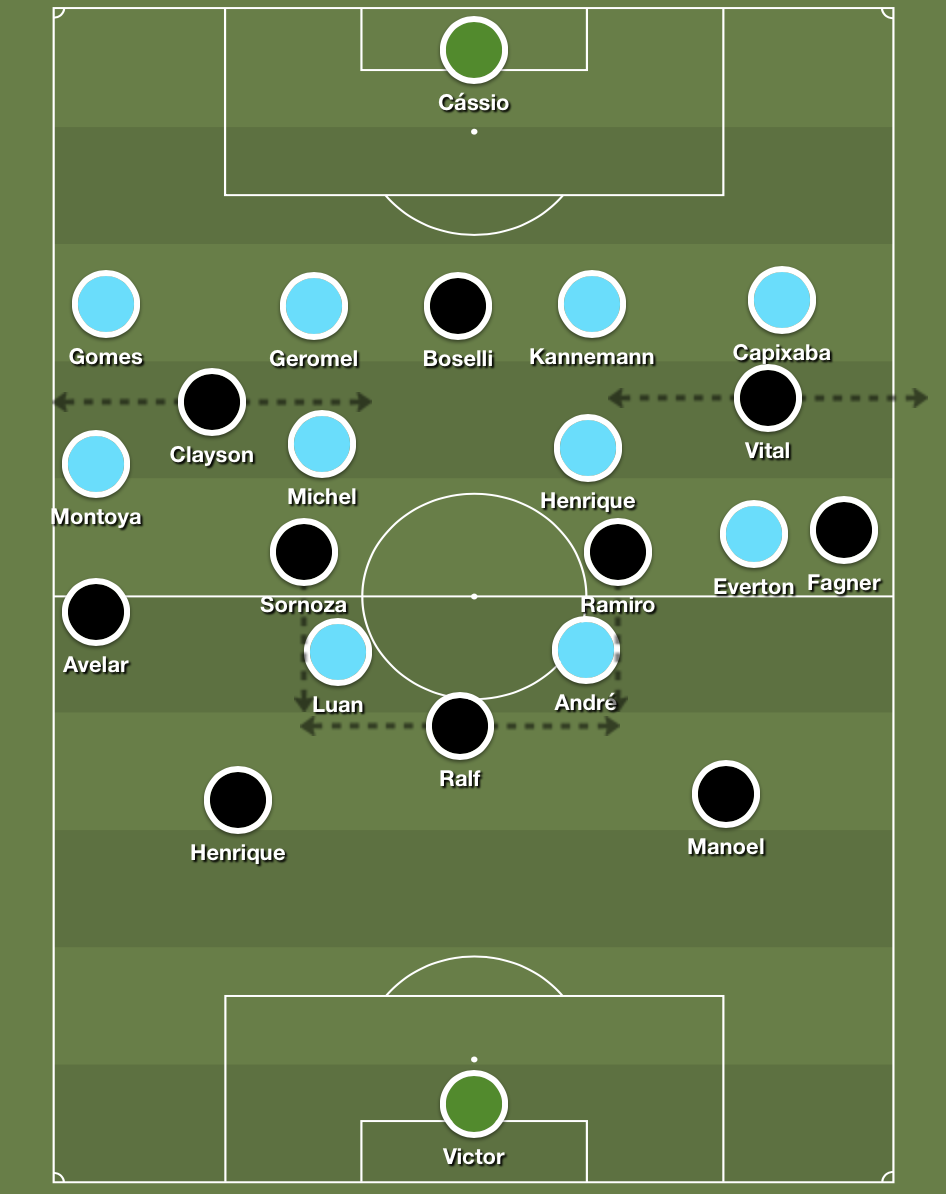 Corinthians’ setup in possession against Grêmio’s 4-4-2 shape in defense.

Compared to Grêmio, Corinthians’ attacking scheme was slightly more sophisticated. Once Sornoza and Ramiro recognized the away side’s tight man-marking scheme, they began dropping in line with defensive midfielder Ralf in an attempt to pull Michel and Henrique out of position. It worked for only a couple of seconds, as Grêmio’s double pivot was often quick to re-assume position, creating only a small window for Corinthians to play a vertical pass. However, thanks to striker Boselli’s advanced positioning, his team were never able to take advantage of these types of situations.

Corinthians’ only moment of joy in organized possession came in the 25th minute, when they exploited Everton’s lax and narrow defensive positioning to play a one-two on the right wing. This allowed them to switch the field, A pass from one side to the other. play between the lines, and get off a shot from range.

Everything else came from counterattacks and fifty-fifty duels in transition situations – the former of which led to an excellent headed opportunity that was saved.

Unhappy with Boselli’s contributions, Carille replaced him with Vágner Love at the half and the substitute got involved immediately. Corinthians again exploited Everton’s defensive positioning by accessing the halfspace If you divide the field in five vertical lanes, the halfspaces are the lanes that are not on the wing and not in the center. Because there is no touchline like on the wing, players have freedom to go everywhere. But this zone often is not as well-defended as the very center. This makes it a very valuable offensive zone to play in and a lot of chances are created by passes or dribbles from the halfspace. and flicking the ball wide. This allowed the home team to surge forward into space and find Love, who forced Victor to save an admirable attempt from range. Two minutes later, Love got on the end of a low cross after a throw-in, spun around, and fired a shot on target.

Corinthians’ opportunities dried up as the second half settled down. Though Love had proved himself capable near the box, he was no deep-lying forward and declined to drop into pockets of space when his midfielders briefly dragged Michel and Henrique out of position.

On the flip side, Everton continued to drift farther and farther away from the wing, appearing almost drawn to Sornoza and Ramiro’s deep movements. This nearly proved costly in the 68th minute, when Corinthians burst down their right flank and fired in a cross for Vital, who completely fluffed his effort despite being completely free.

Soon after, both teams’ defensive organization inexplicably began to collapse. The forwards and wingers seemed uninterested in getting back into position and making tackles, and the central midfielders began to lose their purpose as they tried to defend acres of space. Instead of this chaotic situation creating a greater number of chances, both sides’ counterattacking game was painfully slow and key mistakes were made in the few two-versus-two and three-versus-three situations that materialized.

Neither team played well enough to deserve the victory. Corinthians failed to create quality shots aside from one good header from a counterattack in the first half. And though their awareness to exploit Everton’s offensive positioning was admirable, they lacked adequate support for the man in the halfspaces to take greater advantage of this.

Grêmio’s performance was even poorer. They had no collective way of breaking down their opponent’s defensive structure and their late-game decision-making on the counterattack killed any hopes they had of stealing a result.