A somewhat fortunate early goal allowed Corinthians to do what they do best: defend. Giving São Paulo the initiative and waiting for opportunities to counter, Corinthians were rarely in danger of conceding an equalizer in a pretty poor spectacle. São Paulo didn’t show any ideas or capacity to reverse the situation and continued their dreadful run in Itaquera.

São Paulo looked to be up against it in this Majestoso (“Majestic”, the name given to the derby games between Corinthians and São Paulo). Not only were they in worse form, following two games against Bahia that resulted in a draw and a defeat and no goals scored, but they have also had a terrible record at the Arena Corinthians, losing eight and drawing three of the eleven Majestosos played at the new stadium since its inauguration in 2014.

Corinthians came into this game three points behind their rivals, but in recovery mode since an initial period of only one win in their first four league games followed by a home defeat to Flamengo for the Cup. Wins against Athletico Paranaense and Venezuelan side Deportivo Lara – for the Copa Sudamericana – changed the mood, though.

Corinthians manager Fábio Carille opted for a 4-1-4-1 shape, that could turn into a 4-2-3-1 in the first phase of buildup, with Vágner Love up front, inside forwards Pedrinho and Clayson, Junior Sornoza and Júnior Urso ahead of Ralf and a back four consisting of Fágner on the right, Danilo Avelar on the left and Manoel and Henrique partnering in the center. Cássio started between the posts. The absence of Jádson was the highlight, explained by Carille as being due to physical concerns.

Cuca, without the injured Pablo and Joao Rojas and the suspended Toró, Liziero and Gonzalo Carneiro, started with an offensive looking 4-2-3-1 with Tiago Volpi on goal, Igor Vinícius, Robert Arboleda, Bruno Alves and Reinaldo in defense, Hudson and Tchê Tchê in the double pivot, and Antony, Vitor Bueno and Éverton playing behind Alexandre Pato.

Can an early goal kill a game?

It shouldn’t, but when you have one of the best teams in the league in the defensive phase in Corinthians facing a team that has struggled for goals like São Paulo, an early goal for the hosts was not only a big blow for Cuca’s men, but probably also for the spectacle.

The goal itself came from a fine Corinthians buildup with some luck involved. Urso dropped to form the aforementioned 4-2-3-1 shape and receive the ball from Henrique, saw Vágner Love dropping deep and being followed by Bruno Alves, played a one-two with him and then released the ball to the right as Fágner rushed forward and Love left his marker behind. Bruno Alves managed to recover just in time to intercept Love’s dummy after Fágner’s cross, but Love got to the second ball first, passed to Fágner who surrounded by São Paulo players released the ball to Pedrinho who, on the edge of the box, fired a shot that deflected on Arboleda and left Tiago Volpi no chance. 1-0 with seven minutes played. 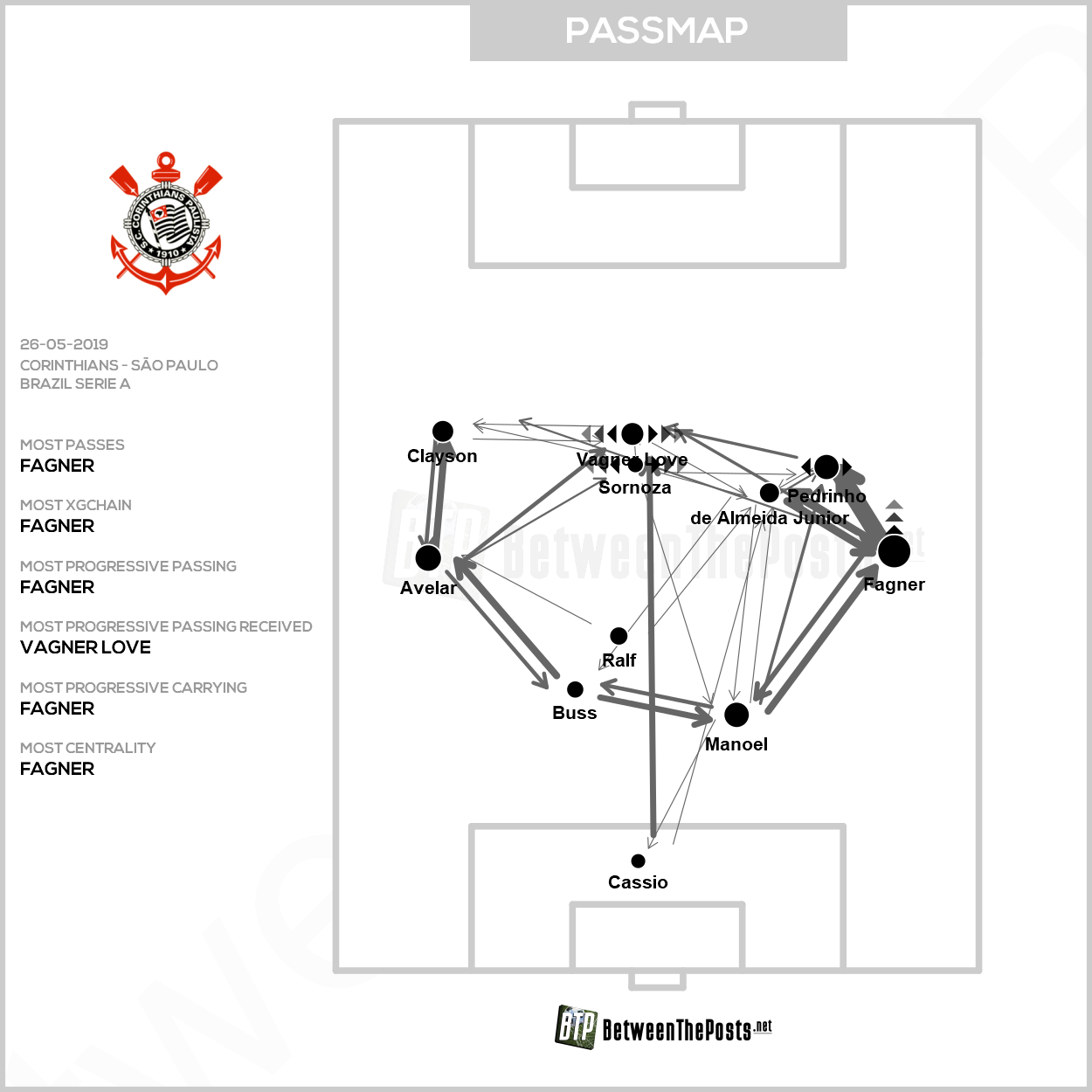 Having taken the lead, Corinthians could play their ideal game, they lowered their defensive block, A defensive block is the compact group of defenders that defends a particular zone, either their own half in a medium defensive block, or the zone around their own box in a deep defensive block. allowed São Paulo to dominate possession and looked to exploit the counter. No team defend as effectively as Corinthians in the Brasileirão, but that was hardly put to the test as São Paulo were toothless throughout.

The team could not stretch Corinthians’ block either laterally – they lacked width with Igor Vinícius in particular contributing very little – or vertically – could not attract Corinthians to press higher and could not threaten in behind. The high mobility of the front four seemed to confuse their own team as much, if not more, as their opponents, as it often made it harder to find an outlet and there was less of a focus on support while accomplishing very little. Alexandre Pato, who would have loved to score against his old club after the way he was treated there, had a particular frustrating game seeing very little of the ball. 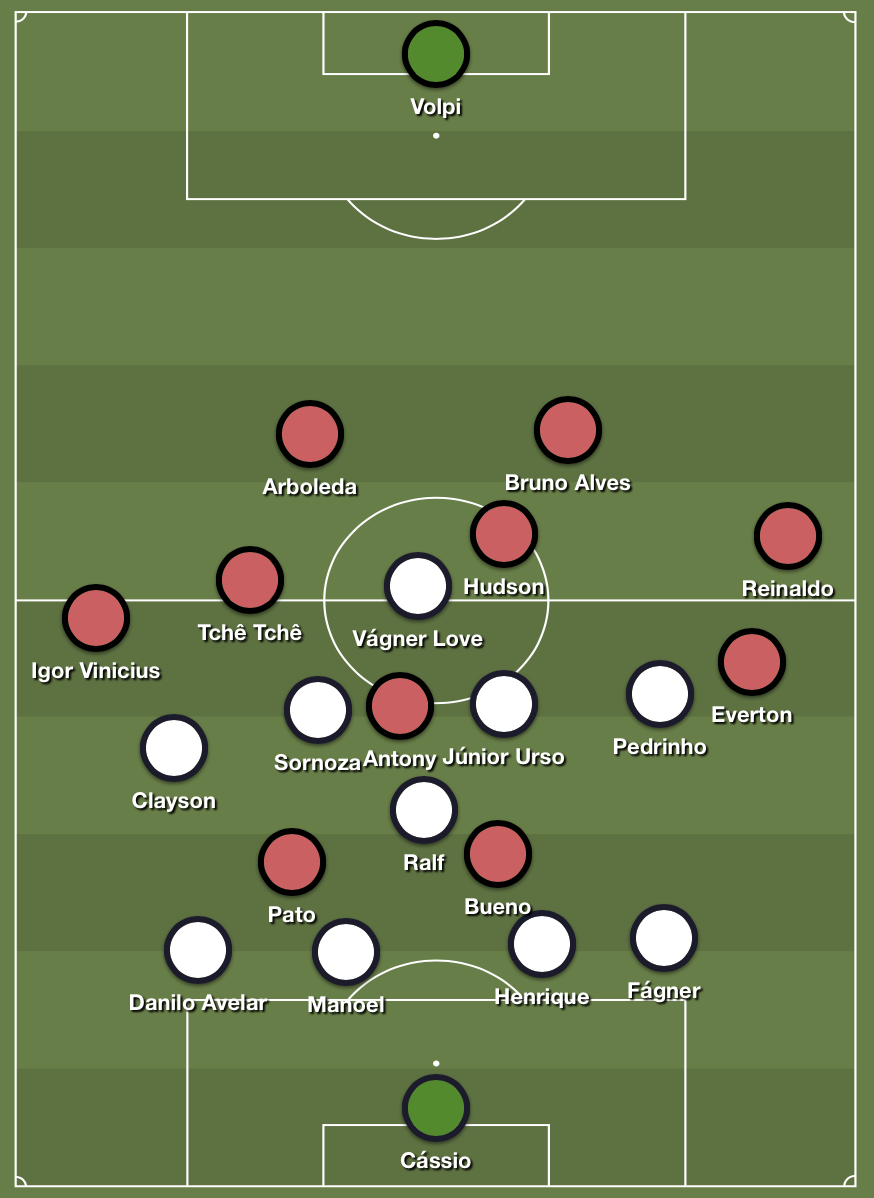 Corinthians’ defensive shape and São Paulo struggling to disrupt it.

Cuca moves the pieces but the problems remain

Cuca spent the second half changing and moving players around, but with little result. First, right after the break, Pato was moved to the left, Everton to the center and Bueno up front. On the 59th minute, captain Hernanes replaced Everton. In the seventieth Cuca was more ambitious and brought Igor Gomes on for Vinícius. This meant Hudson was moved to right back and São Paulo was now playing with a midfield with box to box Tchê Tchê and two attacking midfielders in Hernanes and Gomes behind a front three of Antony, Bueno and Pato. The final change saw Cuca replace Bueno with youngster Helinho to play on the left, returning Pato to the center.

All the while, Cássio remained comfortable and unthreatened. In fact, it was Corinthians who came closer to scoring. In the 68th minute, after a good combination between Pedrinho and Fágner, a cross found Vágner Love who gained a position ahead of his marker and should have done better than a weak header over the top. But the biggest chance of the game came in the last minute as a long ball by Cássio ends up finding Mateus Vital in the box who manages to serve Gustavo one-on-one against Volpi but the keeper made himself big and saved it. 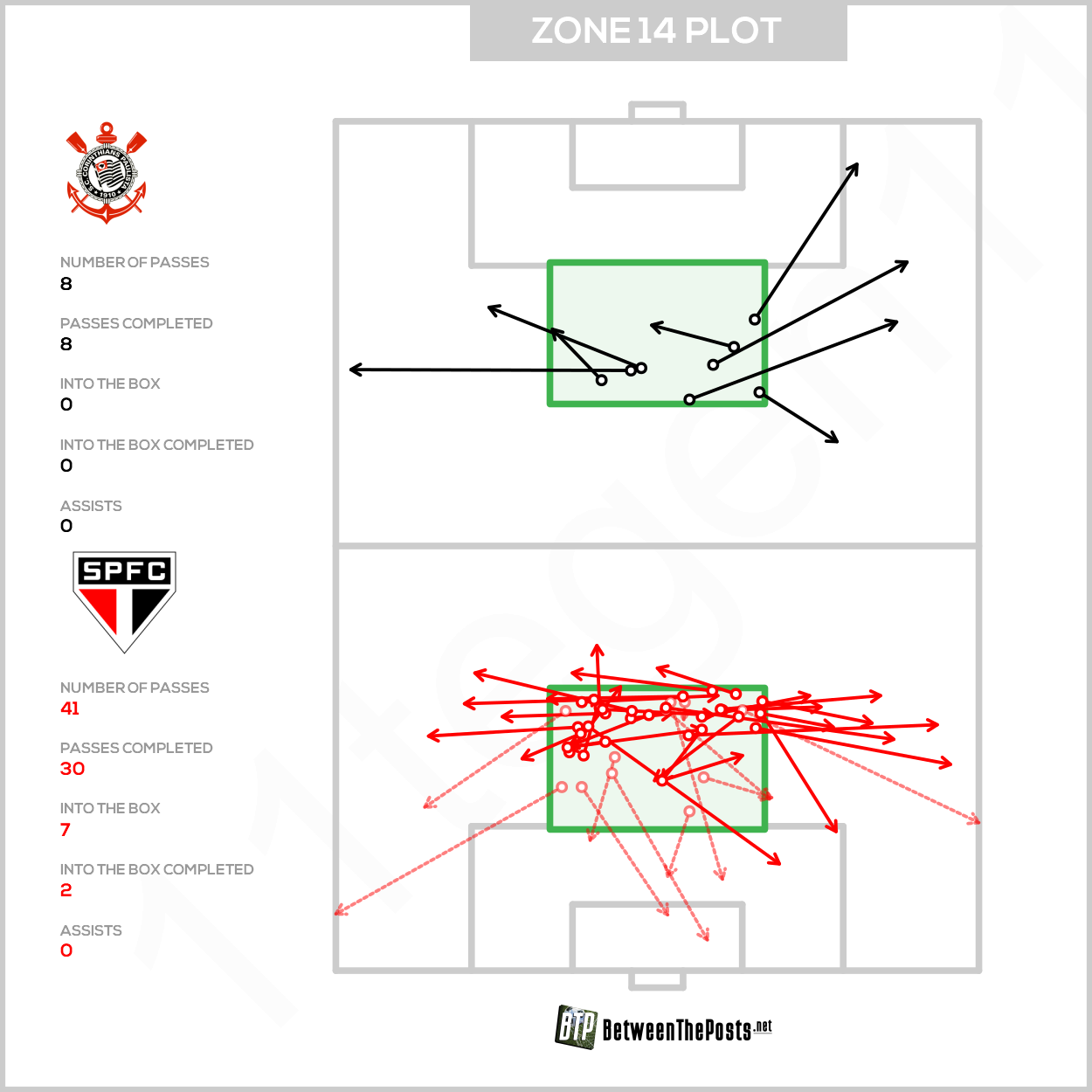 Corinthians allowed São Paulo to play in Zone 14, but expertly prevented any danger coming from it.

A poor game in more ways than one that was won by the better team on the night, but in a game that was heavily conditioned by the early goal that allowed Corinthians to play to their strengths. It was a great defensive performance by the Timão, and they could even have scored a second goal. They can definitely keep a lead, but they won’t always get one so early that luckily. Still, a third win in a row will be a good boost for morale and the return of Jádson will help the team offensively. There is work to be done, but there are reasons to be confident.

São Paulo’s performance, on the other hand, was worrying. That the game would be a lot different without the early goal goes both ways, but it was concerning how little São Paulo managed to create even if up against a top defensive team. They were unable of thinking several actions ahead, had no plan to unbalance and uncompress the Corinthians’ block and were too reliant on the improvisation of their individualities which did not really turn up. The games come thick and fast in Brazil and São Paulo now travel to Bahia to try and overturn a 0-1 first leg defeat in the Copa. Exit from the competition can intensify the pressure on Cuca. 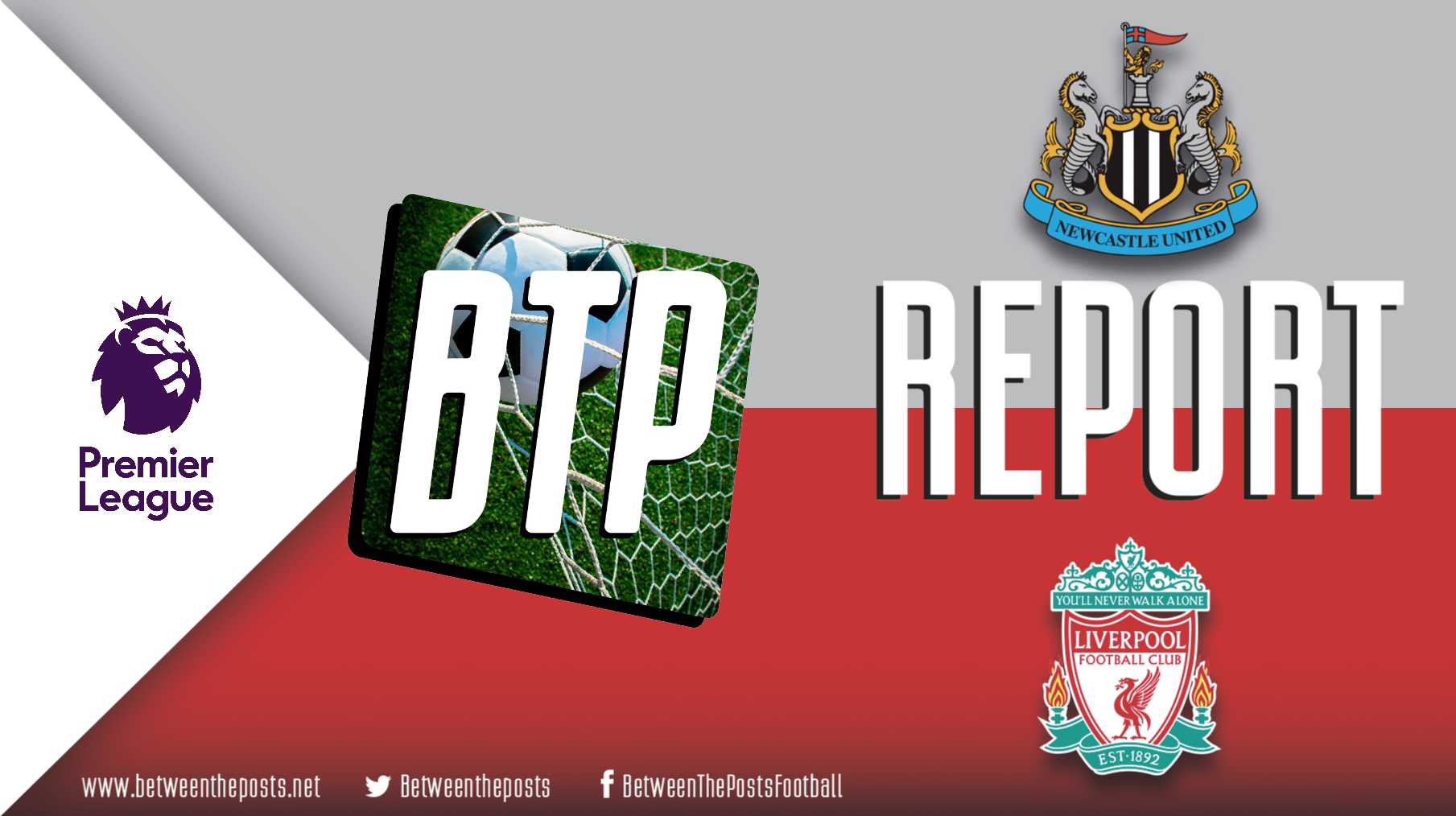 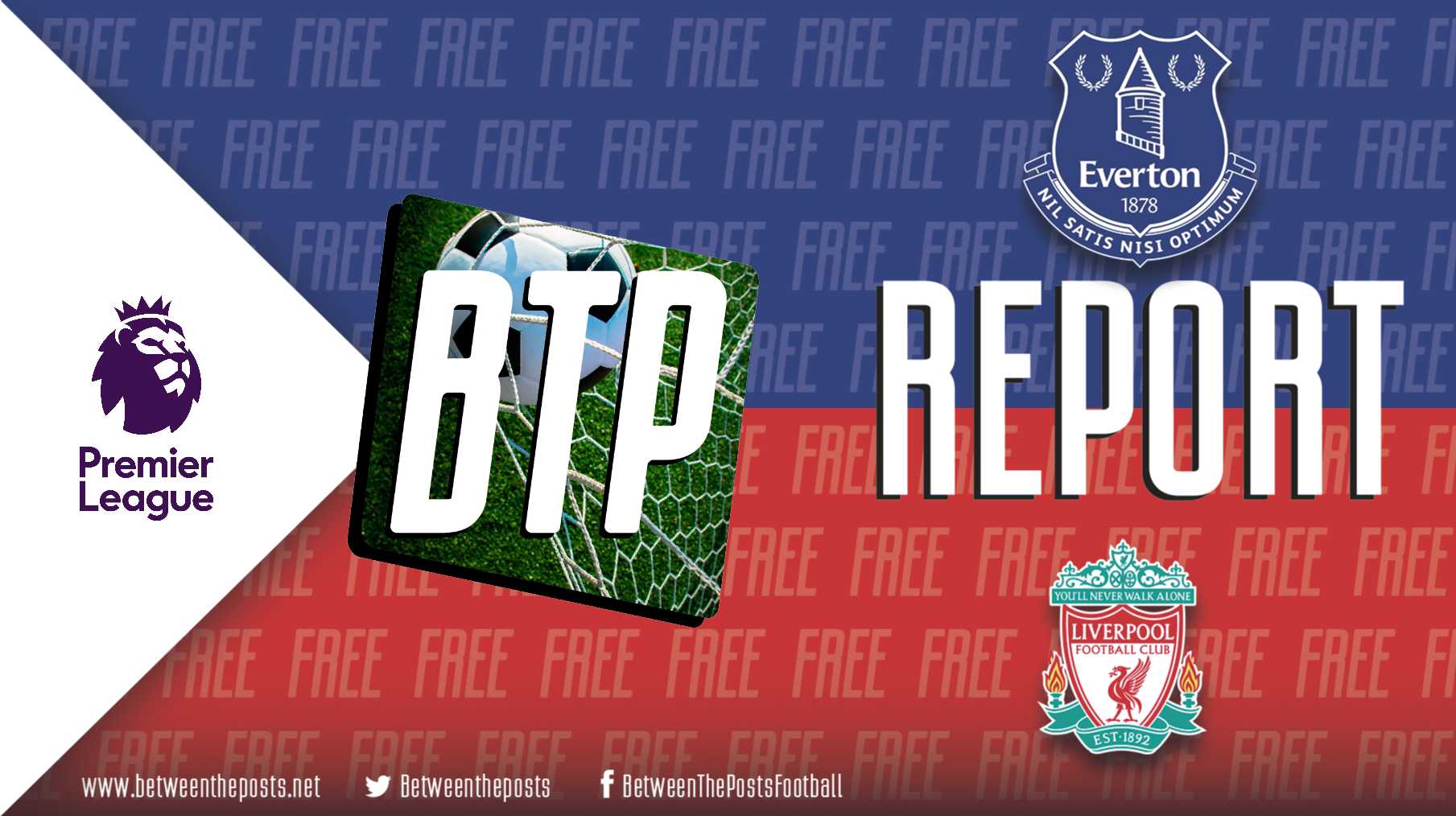