Breaking into the samba dance had built the perfect tournament momentum for Brazil, but how momentum can be killed by the Croatians. Tite adjusted but had no solution against a midfield that rhymes and restricts so comfortably.

On knockout soil, the war of attrition can become the key battle in conflict. No international team is as hardened as Croatia, finalists in 2018 after two shootouts and extra time with England. They would be tested again, but Japanese penalties failed to put a dent in their armor.

Croatia posed a very different threat than what Brazil faced in this World Cup. Tite’s team have given their opponents possession when deemed fit, but no opposition has the balanced and experienced midfield that Croatia has. Zlatko Dalić has relied on this trio to wear teams down, but key Ivan Perišić contributions in the attack and monstrous performances by the masked Joško Gvardiol at center-back had rightfully kept them in the mix.

Nevertheless, Brazil flexed their muscles against an open South Korean defense. Tite has developed a very structured system in the buildup, but that was a performance that showcased their transitional ability too.

Dalić made a crucial change to his team’s 4-3-3 system. Bruno Petković was taken out by Mario Pašalić, who moved to the right of the front three. Their only other change from their shootout win over Japan would see Borna Barišić replaced by Born Sosa in the left-back spot. Brazil were unchanged from the team that trounced South Korea.

Within Brazil’s buildup, handling Casemiro has provided teams with a dilemma. This is mostly due that occupying him has opened up space elsewhere, but Croatia had an effective solution to stomp out Brazillian attacks. His former teammate, Luka Modrić, stuck to his heels in Croatia’s 4-2-3-1 defensive block, always in his central lane and blocking off routes towards him.

As a result, Brazil was forced to drive the ball down their left side, something that Dalić had prepared for. The defensive line was free to exchange with one another, building in their usual slow tempo, in what moved into a 3-2-5/asymetrical 3-3-4 formation. With Danilo inverted from the right-back position, no over/underlaps would come from the Juventus player. Vinícius was tasked with pinning Josip Juranović out wide, so Neymar was encouraged to come deeper towards the ball. 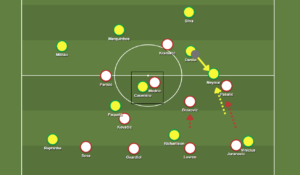 16th minute: Croatia’s 4-2-3-1 defensive approach versus Brazil’s buildup. Neymar dropped deep to collect off the inverted Danilo, with Pašalić the free man off the ball to follow his movement. Croatia compressed the central area and forced Brazil back into its circulation.

The role of Pašalić helped stumble the samba. When Neymar remained forward, he blocked the passing lane from Danilo into Brazil’s star forward and Marcelo Brozović occupying their opponents’ main target. When Neymar dropped towards the center-backs, Pašalić was free to step up because Vinícius was already covered and nobody made the run when Neymar was dropping.

Of course, the PSG attacker has the technical ability to evade, and when Vinícius followed his pass infield, Brazil could rotate past Croatia’s deep block. However, Neymar was forced infield when receiving and Croatia had the vertical coverage from midfield to digest Brazillian balls forward. Croatia continuously collapsed in these areas, with Richarlison very central and Lucas Paquetá out of the midfield to join these phases.

The result was a fragmented Brazilian buildup, without much variety to bail them out. On occasions like this, Tite can bank on his team’s counterpress to create. However, this truly kicks into gear when attacks break down on the channels, not the center of the field. Croatian players regained possession and had the midfield to evade such pressure.

For the past decade, Croatia’s technical prowess has blossomed in its midfield. Brozović, Modrić and Mateo Kovačić share over three hundred international caps between them; a perfectly stable and experienced trio, able to stick to the ball like glue and blessed with excellent passing range. In this environment, we can see why they excel so much.

All three of these players are interchangeable with one another and have la pausa in their play. Opponents may press, but end up chasing the shadow of the ball after a Croatian midfielder has found a teammate. These moments in possession are designed to kill the momentum of their opponents, Out of their 4-2-3-1/4-3-3 system, Croatia was able to sit in the middle third with several players close towards the center-backs. Pašalić dropped out of the right-wing position, to add to his team’s flexibility, whereas Dejan Lovren and Gvardiol also contributed. They stretched out and even moved forward with the ball, which was more prevalent with Gvardiol, to relieve the counterpress. 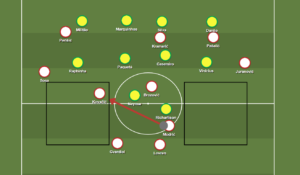 33rd minute: Croatia’s passing set-up versus Brazil’s passive 4-4-2 defensive shape. Space in front of the wingers and around the strikers resulted in plenty of rotation for the Croatian midfield to move into. As long as some occupied this space, they could keep the ball comfortably.

As a result, Brazil was forced into their passive 4-4-2 defensive block, which balanced out the possession stats. Croatia looked comfortable in these phases of play, Raphinha nor Vinícius stepped out of the midfield line to press, so they were able to knock the ball into these areas to keep possession. Modrić ran the midfield from the halfway line, having started the game higher up on the right side and being marked by Casemiro.

Despite Croatia’s phases of control, their forward line lacked such substance compared to their deeper players. Down the right side, Juranović broke out of his defensive position with the ball and often had Andrej Kramarić available on the outside of him. The aim was Ivan Perišić at the back post, but the Brazilian rest defense was not dragged out of position and Éder Militão was more than capable of dealing with some of these crosses.

The game followed the perfect Croatian script. Balanced possession, and little shot activity, but Brazil had been here before in this tournament. Halftime has been an important time for Tite to make some adjustments, but he didn’t turn to the bench as instantly as he had done before. Brazil tried to create more chaos, which almost paid off as quickly as the first minute of the second half when Raphinha and Paquetá finally combined and Gvardiol nearly turned the ball into his own goal.

This attack stemmed from quicker switching across the backline and more direct passing. More chaotic moments would come from these moments, as pockets of space appeared around Brozović and Kovačić. This would appear in chances for Neymar, Richarlison was able to turn past Gvardiol and Neymar slipped into the box, with Lovren’s body orientated towards Paquetá. His shot was saved by the excellent Dominik Livaković, whose tournament has continued to grow stronger.

Tite’s adjustment came in the form of Militão, who played more aggressively from the right-back spot. In the first half, he sat as part of the backline, but in the second, he played a lot closer to Casemiro and even further ahead of his teammate at times. This resulted in more space for Antony, who replaced Raphinha before the hour mark, as Croatia was more bunched against an extra man behind the first line of pressure. Antony was in more one-versus-one situations with Borna Sosa and the field was more open to connecting with Richarlison or a Brazilian forward who had slipped into the space in front of the center-back. 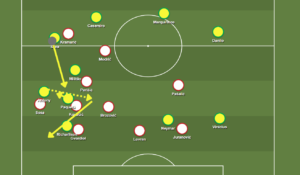 55th minute: Narrow Militão created more problems for Croatia In this phase, a direct pass up to Paquetá was made and Antony had space to carry the ball laterally. This stemmed from Perišić being forced to be more narrow, which made space for Antony to collect and Sosa to be dragged out.

Alterations were also made to the left side of Brazil’s attack. Rodrygo came on to replace Vinícius and Neymar benefitted from a fellow white-haired individual taking his place and allowing him to move higher up the field. On the transition, Rodrygo got on the ball behind Pašalić a few times and Danilo pushed higher to create more dynamism. Neymar between Juranović and Lovren was a big problem for Croatia, another sequence got him through, thanks to Rodrygo’s lateral carry, which required a big Livaković save from an acute angle.

Despite their improvements, the worst possible outcome for Brazil always lingered. They had no solution to Croatia putting the ball through their recycling machine and momentum only lasted in short sparks. Bruno Petković and Nikola Vlašić came on into the striker and right-wing roles, but their off-ball instructions remained the same as their predecessors. Whether you like it or not, Croatia will drag you by the scruff of your neck into their ultimate playing field.

Crumbled by the weight of expectation

Yet extra time doesn’t always deliver entertainment. This was a match which lacked shots but was poised by anticipation. Brazil had teased routes into the box but failed to ignite in ways they had done in previous games.

That all changed as the first half of extra time drew to a close. Neymar received off Marquinhos, a Croatian block once again stared back at him. A one-two with Rodrygo got past Modrić and Mislav Oršić, another one-two with Paquetá got past Gvardiol and Neymar kept balance to get past Livaković and fire the ball into the roof of the goal. Another sensational Brazil goal to pure elation, but Croatia are well versed in their prime environment.

Four minutes remained of the match and you could still trust a veteran Modrić to get past a presser. This time, they could launch a counter, with seven Brazillian players in the Croatian half. Oršić was left free on the left with space to sprint into, a patient Petković open just inside the box. His shot deflected off Marquinhos and beat Alisson Becker between the posts.

Advantage Croatia going into penalties, a team that had won three of them in the last two tournaments alone. Livaković saved the first attempt from Rodrygo, as Brazil’s world crumbled around them with each Croatian penalty being scored. The pressure was on Marquinhos to keep their hopes alive, denied by the foot of the post to send them out.

No team has expectations like Brazil. They have won the competition more than anyone and walked in with both a squad and a plan that listed them as pre-tournament favorites. Tite alterations had to be made throughout, but Brazil was undoubtedly good enough to go all the way, with an attack stacked with talent.

But World Cups are about attrition, just as much as it is about beauty. Croatia forced their opponents into their approach and has all the makings of true knockout artists. They can frustrate you in a low block, become incredibly difficult to press as well as a coach that makes the important tactical tweaks to tackle more sensitive areas, Pašalić on the right wing is a perfect example. An incredible achievement, from a team with an incredible legacy. 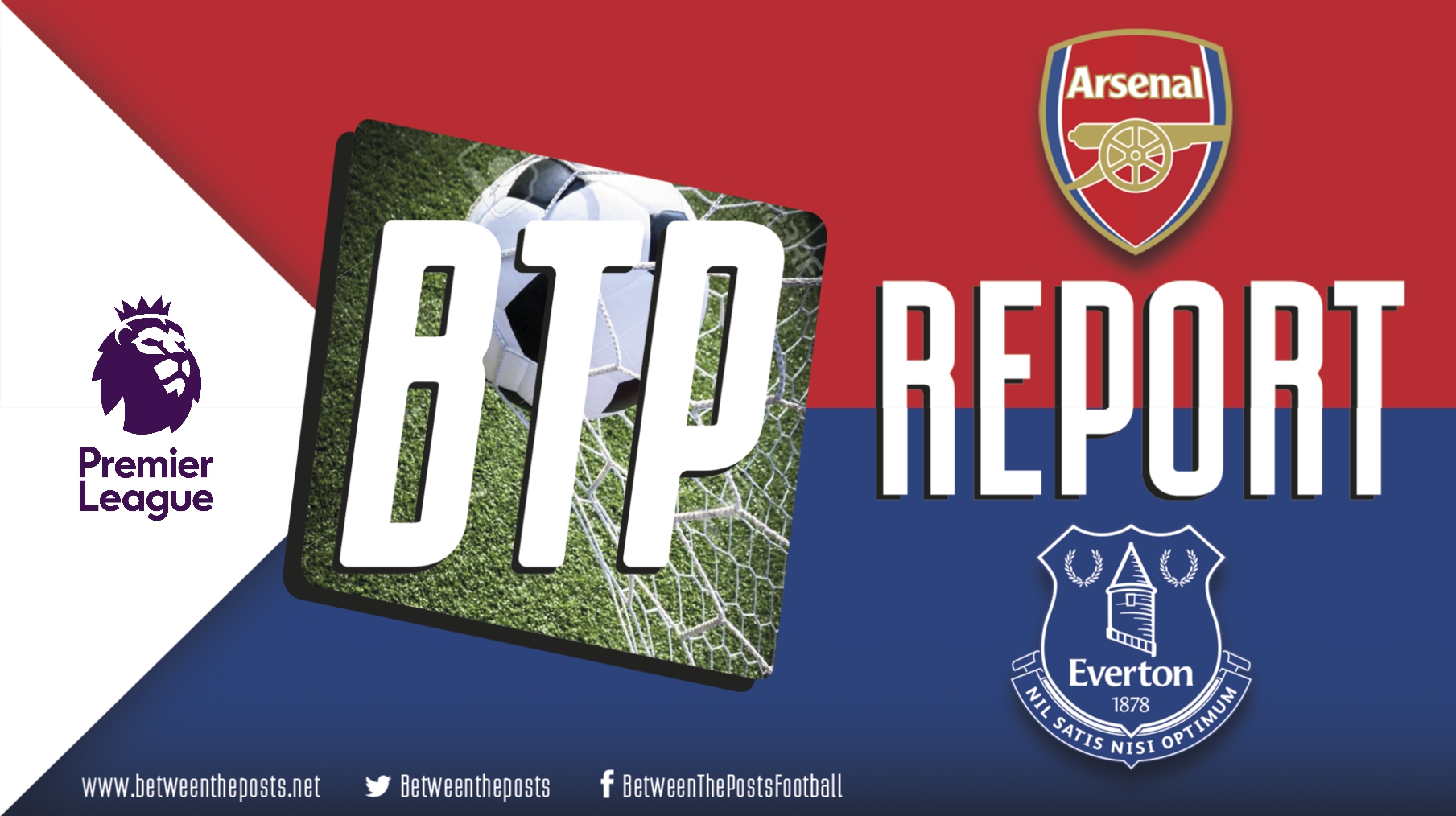