Croatia – Morocco: Croatia End Their Campaign On A High Note (2-1)

Croatia achieved a memorable victory over Morocco and secured the bronze medal in the process. The repeat of the goalless Group F draw was a tense affair, with both teams having their moments, but Croatia once again held their nerves courtesy of some stringent defending in the second half.

As the excitement for the World Cup’s grand finale beckons, it is easy to ignore that a game for the bronze medal is on the line. Pre-tournament, Morocco and Croatia were given little to no chance of progressing to the semi-final, but they defied the odds by getting the better of several talented outfits. Moreover, this is not the first time these two sides lock horns recently, as they were paired in the same group and canceled out each other in the opening fixture of Group F.

Walid Regragui’s Morocco have had a tournament that few will forget. Their journey to the final four was one for the ages, courtesy of some tenacious defensive performances and eye-catching play further up the pitch. The semi-final defeat against France will be hard to digest, but a third-place finish could further cement their status on the world stage and showcase their progress under Regragui.

Morocco stuck with their 4-1-4-1 formation, with Yassine Bounou starting between the sticks. Achraf Dari and Jawad El Yamiq continued to deputize the injured Romain Saïss and Nayef Aguerd in the center-back slots. Archaf Hakimi and Yahia Attiyat Allah were the fullbacks, while Sofyan Amrabat, Abdelhamid Sabiri, and 18-year old Bilal El Khannouss formed the midfield. Despite changes to the defense and midfield, Hakim Ziyech, Youssef En-Nesyri, and Sofiane Boufal kept their places in attack.

Croatia arguably lived on the edge throughout the World Cup, but their experience of coming out on top during difficult moments enabled them to reach the semi-finals once again. After the disappointing loss to Argentina, Zlatko Dalić rotated his side, but the in-form Dominik Livaković continued in goal. Josip Stanišić replaced Josip Juranović at right-back and Josip Šutalo came in place of Dejan Lovren, whilst Joško Gvardiol and Ivan Perišić completed the back four. Marcelo Brozović was rested, so Lovro Majer was given the nod alongside Mateo Kovačić and Luka Modrić in midfield. The front three comprised Mislav Oršić, Andrej Kramarić, and Marko Livaja.

Croatia start on the front foot

In contrast with their previous encounter, the game started with goals from both sides before the opening ten minutes, through set-pieces. Gvardiol opened the scoring from Croatia’s smartly worked double-header set play, while Dari put the ball behind the net from Hakim Ziyech’s delivery into the box. This set the tempo of the match early on, but Croatia started taking control soon after Morocco equalized.

Modrić and Kovačić dropped deep to dictate the play, which in turn allowed the likes of Perišić and Stanišić to advance up the pitch. While the latter usually stayed behind to form an asymmetrical back three, he played higher once Majer moved centrally. Since Morocco allowed the two central midfielders to set the tone, Croatia looked to create overloads EXPLAINER on the left side with Oršić occupying Hakimi, whilst Perišić made runs into the space. 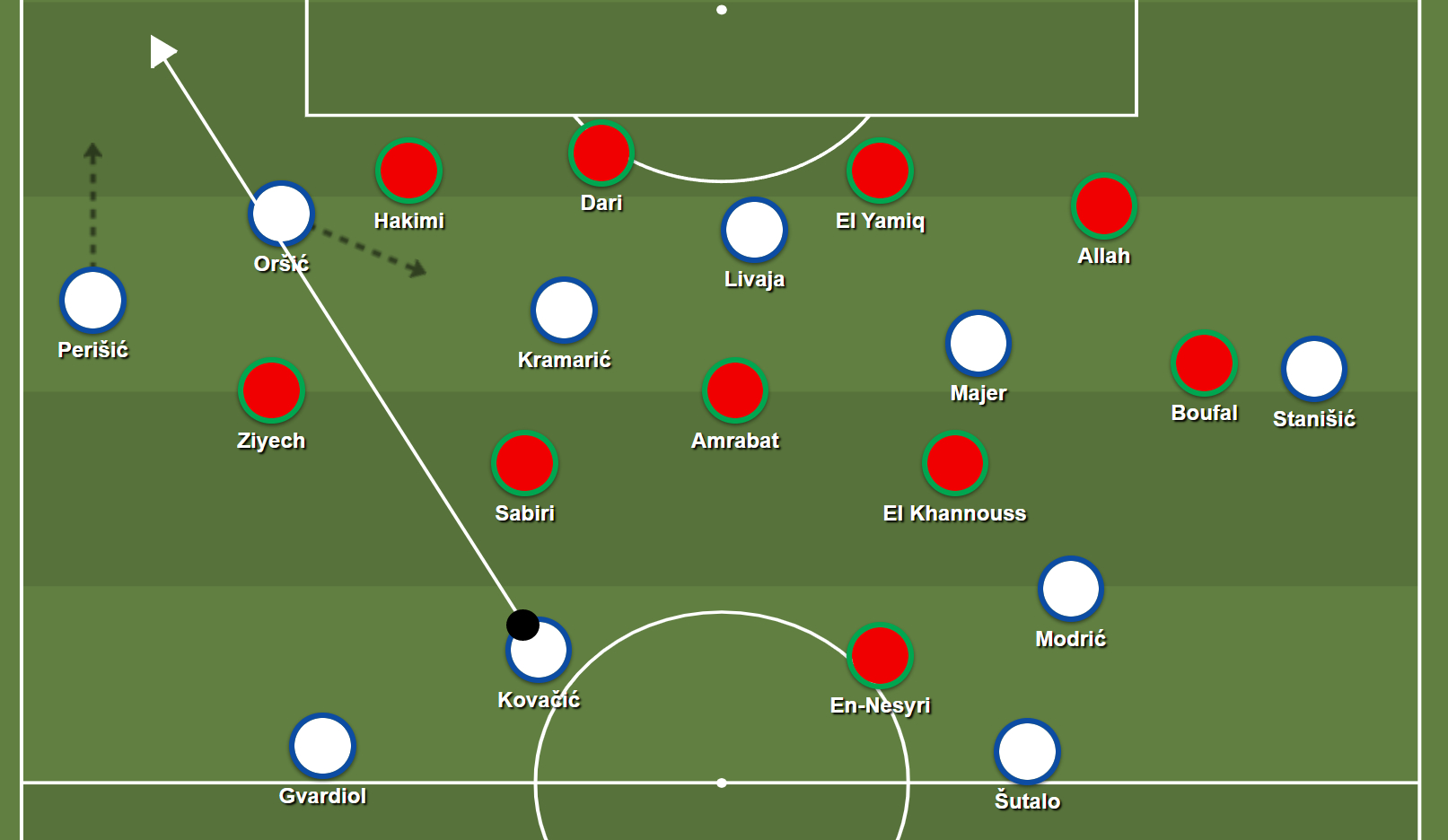 Minute 37: Kovačić is allowed to receive the ball and as Sabiri presses him, he plays a lofted pass to Perišić. As Perišić makes a dart forward, Oršić vacates the wide area and moves inside to create a two-versus-one situation against Hakimi.

Majer’s movement from the right flank to the central areas also caused a few problems for Regragui’s side. Modrić and Kovačić were constantly able to find him as he made a move to the halfspaces from the blindside EXPLAINER of Amrabat, therefore creating central overloads. But Croatia struggled to find the right passes in the final third EXPLAINER for the first half-hour of the game.

Meanwhile, Zlatko Dalić’s side played in a 4-4-1-1 structure out of possession aimed to stop Amrabat from progressing the play, with Kramarić screening the midfielder. Modrić and Kovačić were tasked with marking El Khannouss and Sabiri in midfield.

However, Morocco’s rotation and combination between the fullback, central midfielder, and winger provided an opportunity to drag their opponents around and create clear-cut chances. But, despite a period of sustained Moroccan pressure, Croatia took the lead, thanks to a stunning strike from Oršić towards the end of the half.

Morocco fail to find a way past Croatia

Morocco came out of the break with a positive mindset as they started pressing Croatia higher up the pitch. They closed down the space for Modrić and Kovačić in possession, but Croatia’s star midfielders often found a solution to progress the ball. Regragui reacted to this by bringing Azzedine Ounahi to the field hoping that he would penetrate Croatia’s stern defensive block.

Ounahi certainly provided that, and his combination with Hakimi and Ziyech once again stood out. They began creating numerical superiority on the right side and took control of the proceedings. Hakimi regularly inverted from a fullback position, which allowed Ziyech to receive the ball near the touchline and cut inside. Ounahi made runs into the halfspaces as Morocco’s well-worked triangles on the right flank started creating trouble and ultimately pushed Croatia behind. 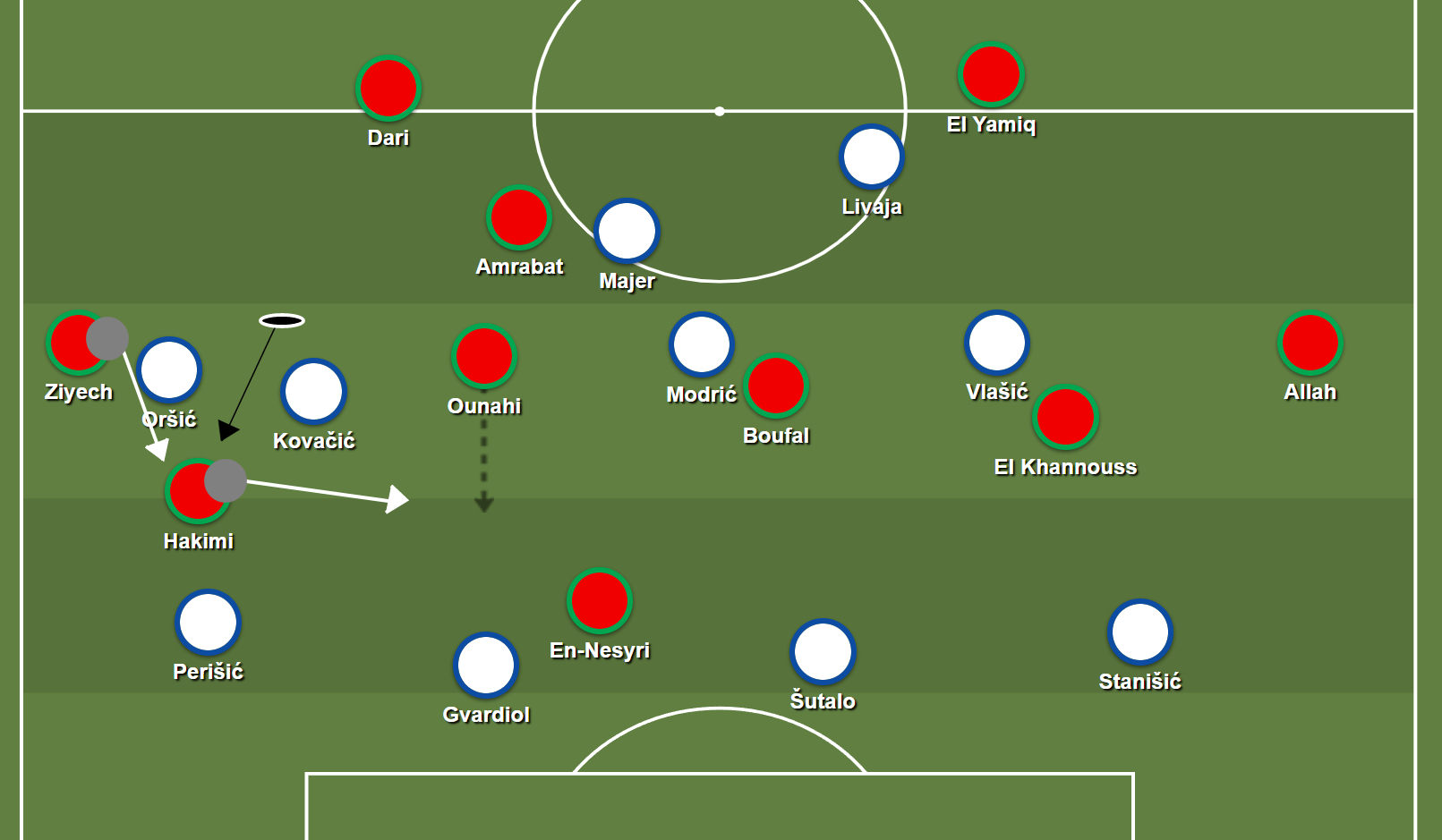 Minute 62: Morocco’s progression from the right side. As Ziyech receives the pass, Hakimi, who starts from an inverted position (marked in black), makes a run outside. Kovačić now blocks the passing lane to Ounahi while doubling up on Ziyech, but the winger moves the ball to Hakimi, who plays a simple pass to Ounahi in acres of space.

As the game entered the last quarter, Morocco made a host of attacking changes, with Amrabat even playing as the emergency center-back. As the game stretched, En-Nesyri was handed a golden opportunity, but Livaković denied him from point-blank range. Croatia eventually shifted to a 4-5-1 low block structure EXPLAINER to see out the game and were successful in their efforts, while also having a couple of half chances to score. The 2018 World Cup runners-up displayed their experience yet again as they sealed the bronze medal for the second time in their history. 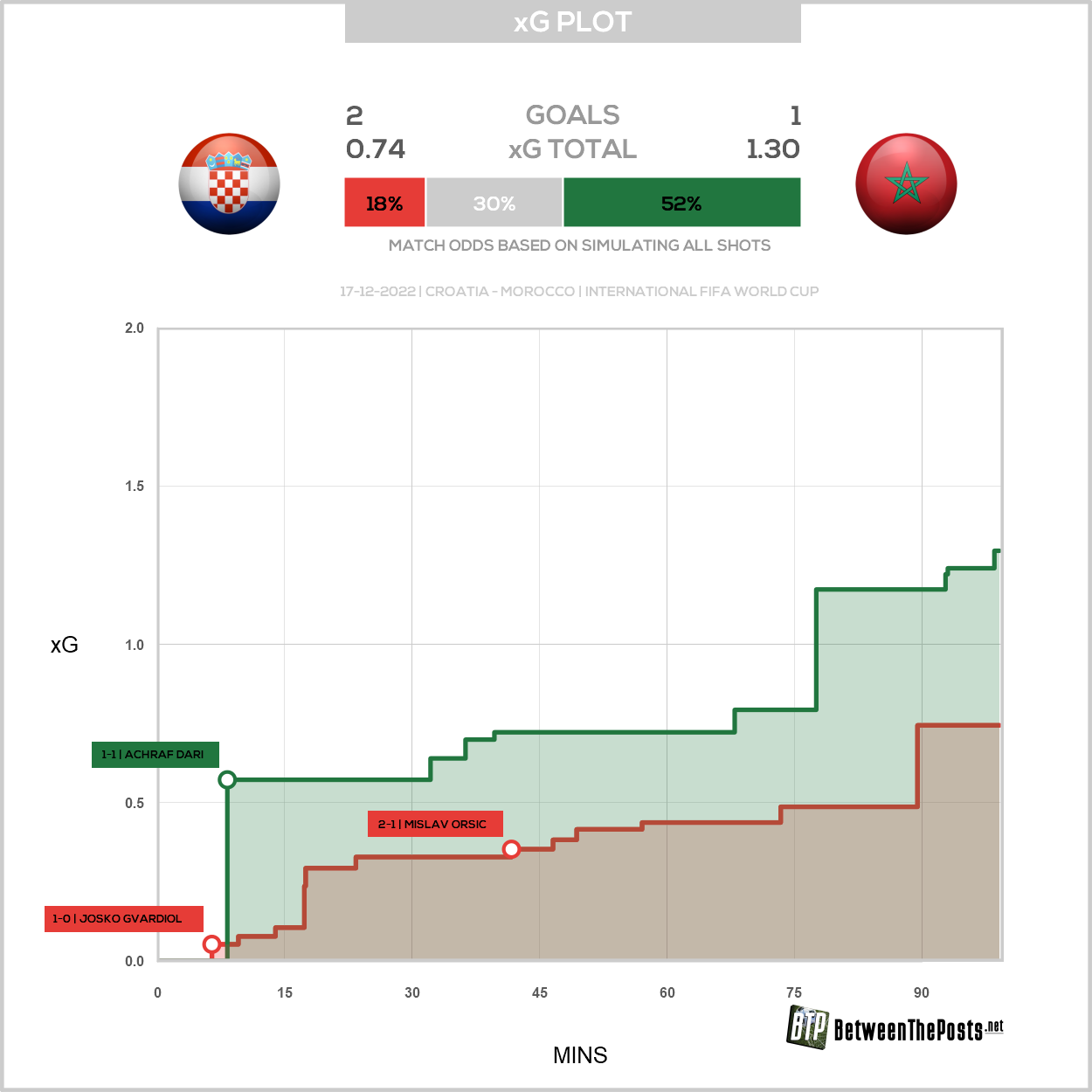 While several teams were given attention ahead of the World Cup, Croatia stole the show on the biggest stage all over again. Apart from a poor display against Argentina, Croatia managed to stay in the game throughout the tournament and their persistence paid off in some style. The likes of Modrić, Brozović, and Perišić might have played their final World Cup game, but Croatia continue to produce exciting talents with Joško Gvardiol grabbing the headlines this time around. A third-place finish is undoubtedly an achievement to withhold and celebrate.

Morocco, on the other hand, created history in Qatar. They became the first African nation to progress to a semi-final of the World Cup and beat several European heavyweights along the way. Unfortunately, their last two games ended in defeats, but this could be attributed to the number of injuries they sustained during the tournament. Regragui and his talented team of footballers will return with their heads held high, providing a strong hope for the future of Moroccan football.