Cruzeiro – River Plate: An open stalemate let down by indecisiveness (0-0, 2-4 on penalties)

Transparent midfield bases were at the core of both teams’ defensive problems, although neither side could raise any troubling questions with their narrow formations.

Having met merely a week ago in the first leg, many spectators would have been hoping for an alternative score line following last week’s goalless draw. River Plate would have been one of those parties as they came away the unluckier of the two in the first leg. In the intervening days, these two sides failed to win their respective league matches.

Cruzeiro coach Mano Menezes, for the second week in a row, refused to shy away from making heavy alterations to his side. Only midfielder Ariel Cabral kept his place from the eleven that suffered a 2-0 defeat to Athletico Paranaense at the weekend. Even the 4-2-3-1 system was changed to a 4-4-2 shape for this encounter.

Marcelo Gallardo was also quite hefty in his switch-ups, as six players made way in their 1-1 away draw with Argentinos Juniors. This saw a completely refreshed midfield enter the frame for this second leg, as well as a further two changes in the right-back and center-forward positions. Gallardo’s 4-4-2 setup remained in parts but their possession-based setup bared more resemblance to a back-three.

River Plate assume early control but without much bite

The visitor’s attacking shape certainly differed from their defensive one. From the start, it consistently featured Leonardo Ponzio dropping between the center-backs, with Enzo Pérez moving into a more central position. With a narrow four-man attacking structure, this helped to form something closer to a 3-5-1-1 formation.

In this, they mostly targeted the left flank. If not the left back then the left-sided midfielder would provide the width, whilst the former pushed up inside to maintain the positional structure. As the wide midfielders liked to narrow in and come very deep, acting closer to central midfielders than anything else, the far-sided wide midfielder, Ignacio Fernández, would frequently come across Cruzeiro’s midfield line or just hold his spot in the far right halfspace. If you divide the field in five vertical lanes, the halfspaces are the lanes that are not on the wing and not in the center. Because there is no touchline like on the wing, players have the freedom to go everywhere. But this zone often is not as well-defended as the very center. This makes it a very valuable offensive zone to play in and a lot of chances are created by passes or dribbles from the halfspace. 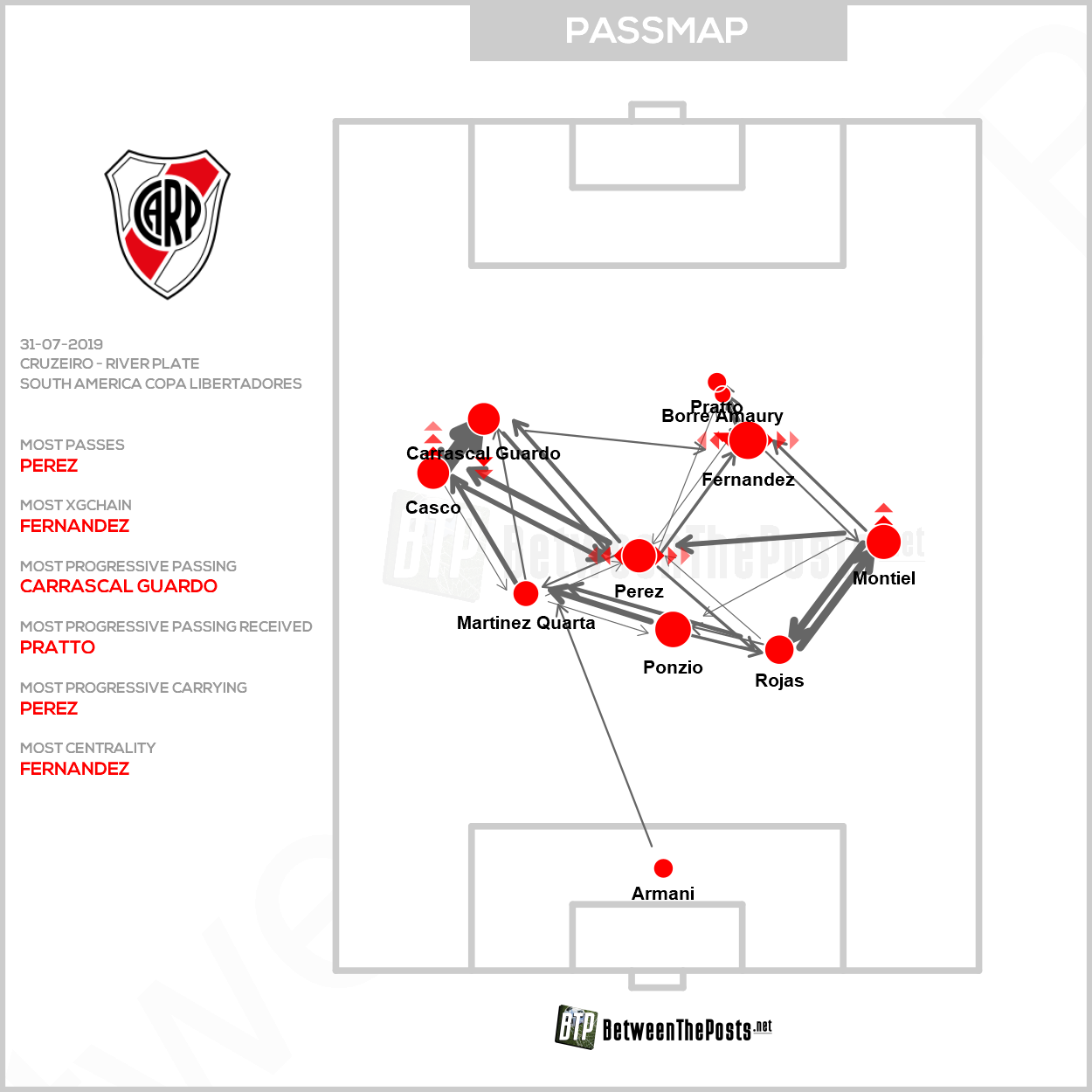 Most of the time, the attacker was free due to the fact that Cruzeiro’s left-midfielder, Marquinhos, in their 4-4-2 defensive setup pertained a very deep and wide role to cover switches of play. A pass from one side to the other. However, this forced the home side to become horizontally incompact as the right midfielder, Lucas Romero, also attempted to do the same in their man-for-man covering of River’s wide rotations. And, with Cruzeiro’s central midfielders always willingly stepping out onto the ball, they could be easily bypassed thanks to the plethora of attacking options between the lines for the away side.

The host’s strikers were positioned quite deep and were thus blocking entry into Pérez, so the access into Fernández bared some importance as he was often free right in front of the box. 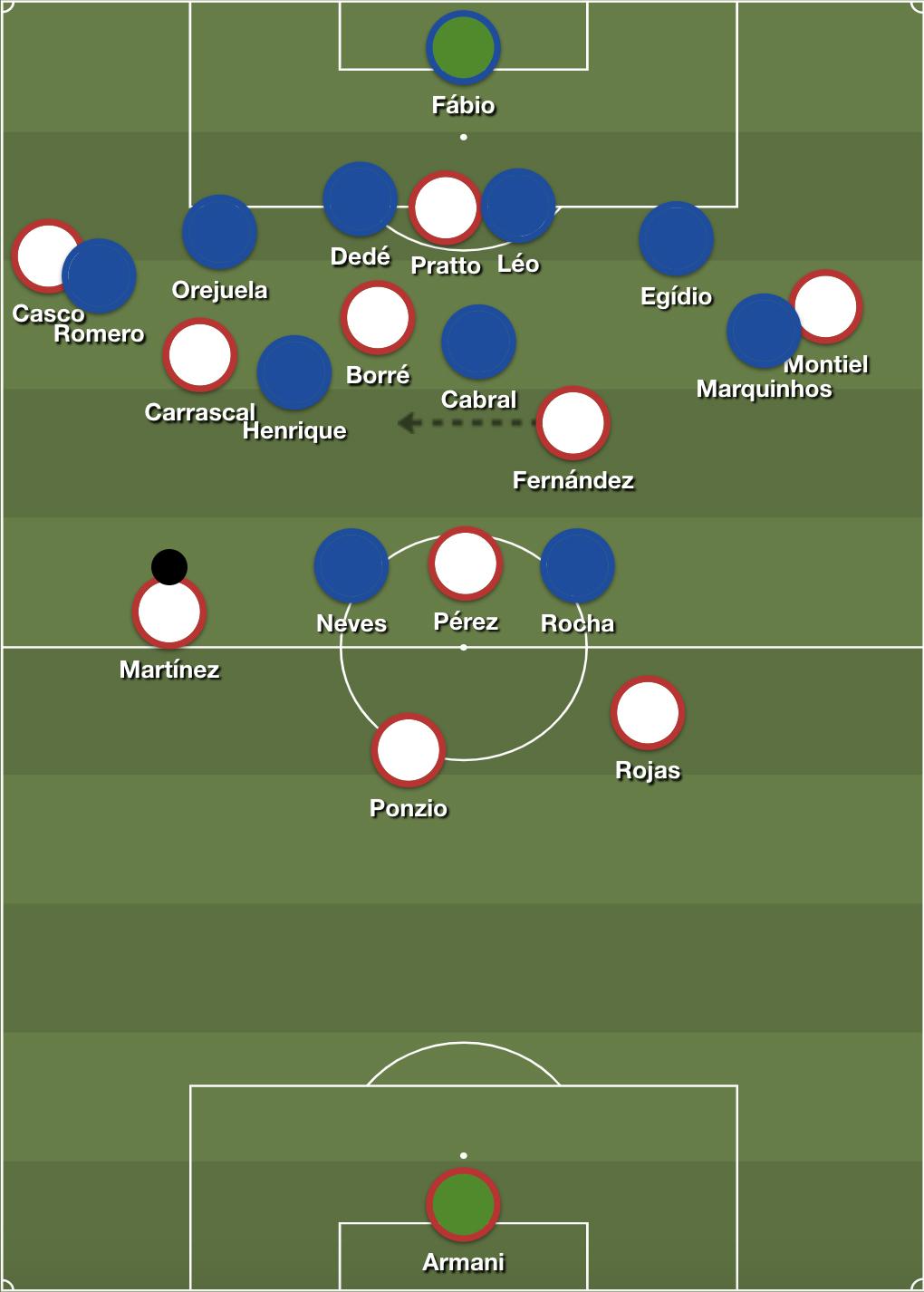 River’s attacking setup, using a 3-5-1-1 shape with Fernández coming across.

What also helped to maximize the exposure of the home side’s midfield was the fact that River’s inside players were inverted. So, when Jorge Carrascal and Fernández stepped onto the ball, it was with an instep against the grain of their opponent. This helped either player to shield the ball better, keep close control and drive inside. This led to a good shooting opportunity on the edge of the box by the twenty-minute mark, when Fernández dropped wide on the right before carrying it sharply inside, easily past one midfielder before exchanging a quick give-and-go around the other using one of the two strikers. He had a good overlapping run to his left but instead drilled an inviting shot wide.

Menezes’ men were not the only side in this match to look more than a little exposed at times; that was clear in the threat provided by their counterattacks. The problem River had following turnovers was that there was a big vertical gap between their closing midfield and their rest defense. With the two strikers, Pedro Rocha and Thiago Neves, deep, Cruzeiro were well positioned to be able to provide quickfire options to the deep ball-holders.

In the meantime, Marquinhos would make a bursting run on the left side, down the channel which was vacated by right back Gonzalo Montiel, who had the responsibility of maintaining width down the right flank for the away side. By the time they had worked it from right to left, the Cruzeiro ball-holder could then set Marquinhos on his travels.

In an early instance of this, he then cut back in before exchanging a give-and-go similar to Fernández’s aforementioned one against an all-too-isolated holding midfielder. One he had evaded his man, he could find the wide-open Neves. However, his pass was poor and sent Neves wide. The attacker did collect the ball and managed to feed it perfectly into the central overload. The ball then fell kindly for Rocha, whose blazing effort was impressively pushed onto the bar and out by goalkeeper Franco Armani. 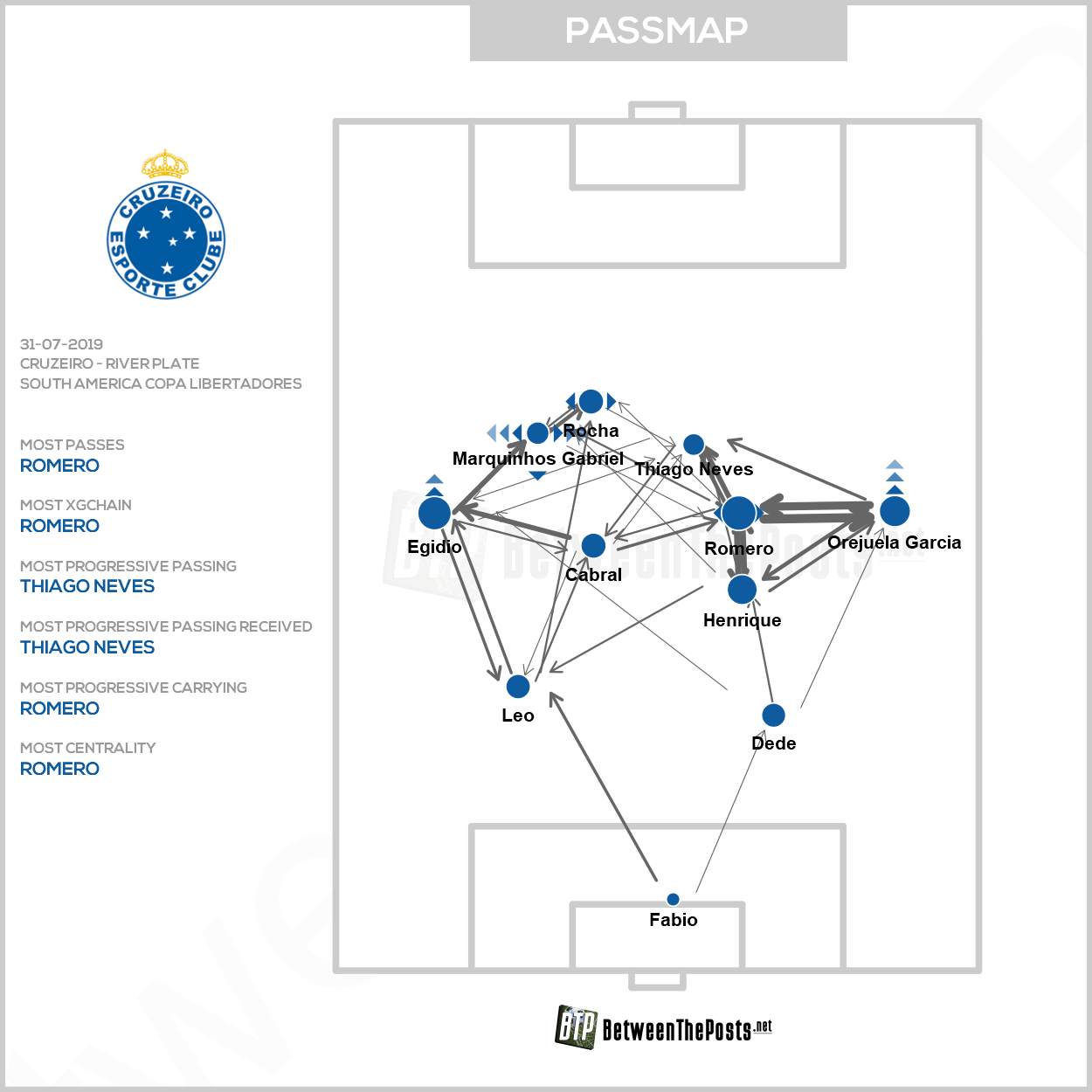 Cruzeiro start to impress on the ball

Once River gave them some room, the hosts began to strut their stuff. For the first time in the tie, they looked like a side with something about them, some greater intent and planning.

Their 4-4-2 shape transitioned into a blend between a 4-4-2 diamond and a narrow 4-3-3 formation, with both of these hinging on the whereabouts of the ball and Neves’ movement.

Attacking down the left was where they struggled the most. Cruzeiro, there, either played short into left back Egídio whilst simultaneously congesting his space, which made it impossible for him to play out of. Or, they pumped it higher and longer, looking to win second balls in the diamond structure. Neither of these plans of attack were particularly successful.

Centrally and down the right was where they found much more joy. Here, we saw more interchanges in attack and greater exploitation of River’s defensive setup. Because River pressed in a quite bizarre 4-1-3-1-1 shape, they also left their deep midfield horribly exposed. So, when Neves dropped between the lines, away from Ponzio – a space opened by Henrique Pacheco Lima’s runs into depth down the inside right channel – Cruzeiro had the freedom of the park to then make a quick switch.

The same run through the right halfspace was even more dangerous when Neves pushed wide to make a 4-3-3 shape when supporting the right back. With River’s left back pushing onto his opposite man, Neves’ movement would help draw out center-back Lucas Martínez. Then, with so much space between the lines, Henrique’s runs could be so easily located either through Neves from out wide or simply from one of the deeper ball-holders. 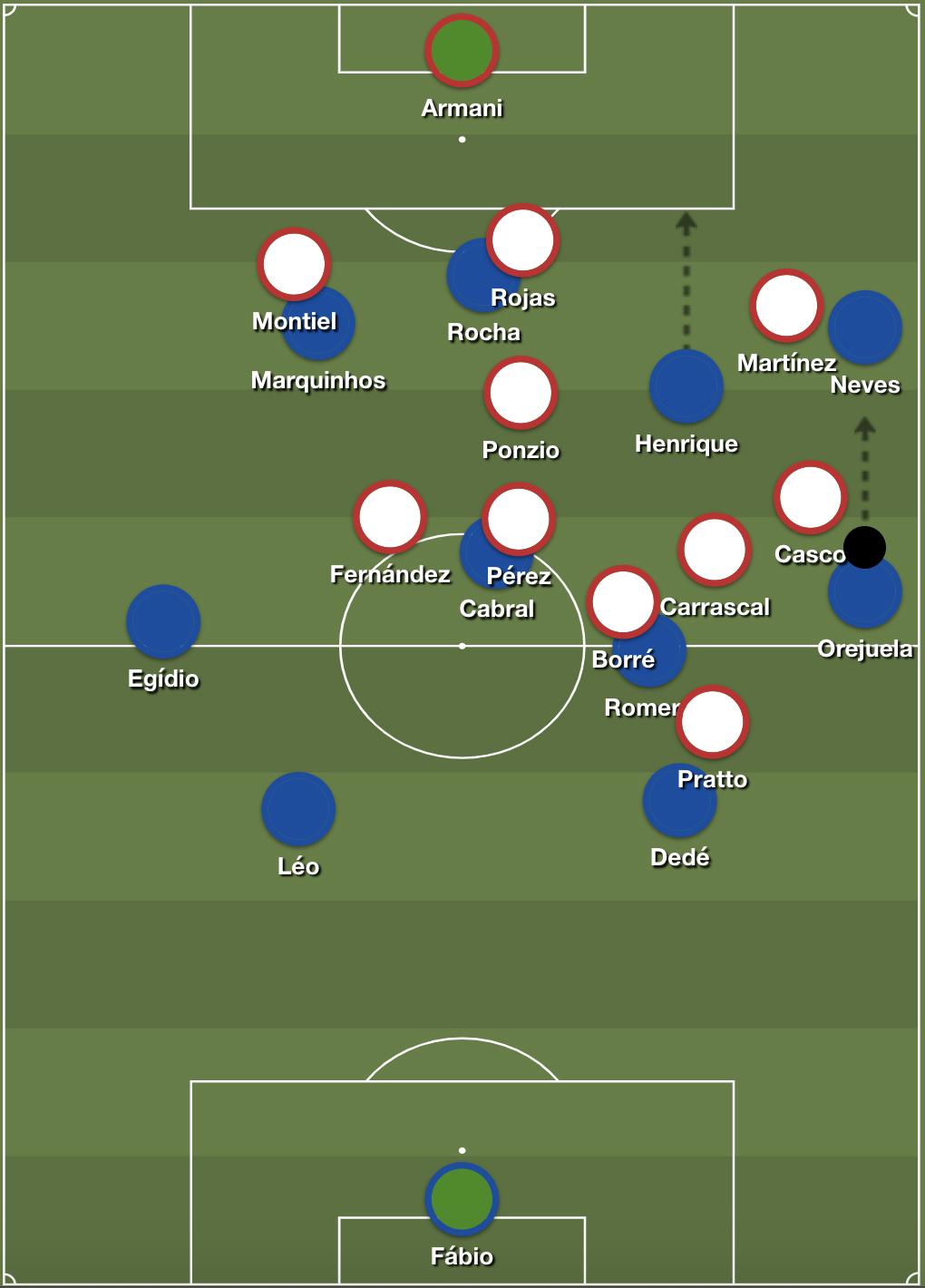 Henrique’s run through the channel, exploiting the drawn-open River defense.

This, on one occasion, led to a two-versus-two scenario in the box for a cross. Were it not for a poor first touch, Henrique could have found the wide-open Rocha at the far post for a potential tap-in. That lacking level of quality in the final third was present throughout both teams; not just in the first half but the second half too.

For all the good crossing positions both sides worked open, neither side could actually forge together any decent chances for themselves.

Second half alterations do little to sway the tide

Exequiel Palacios was a half-time change made by Gallardo in place of Ponzio. It was one that initially proved to be quite a smart one. As Cruzeiro’s strikers showed more attacking intent with their pressing up against the center-backs, they consequently opened the lane into the new number six. River used this to their advantage, with them now having a greater span of angles in which to access the blind-sided attacking players.

This threat soon wore off, though. The most it could achieve was a free kick awarded on the edge of the box that was hit over. Once Cruzeiro’s strikers retreated, things became tougher again.

For large spells of the second period, neither of the two sides could maintain the same foothold. Even when they could, they fell short of showing the inventiveness to create clear openings that they did in the first half. No matter what changes they made, nothing was able to push either side over the line, and so it came down to penalties. Off to a nightmare start, Cruzeiro missed two of their opening three chances, with River converting every one of theirs. Robinho kept hopes alive inside the stadium only for Rafael Santos Borré to devastate the fans and send the Argentinian title holders through. 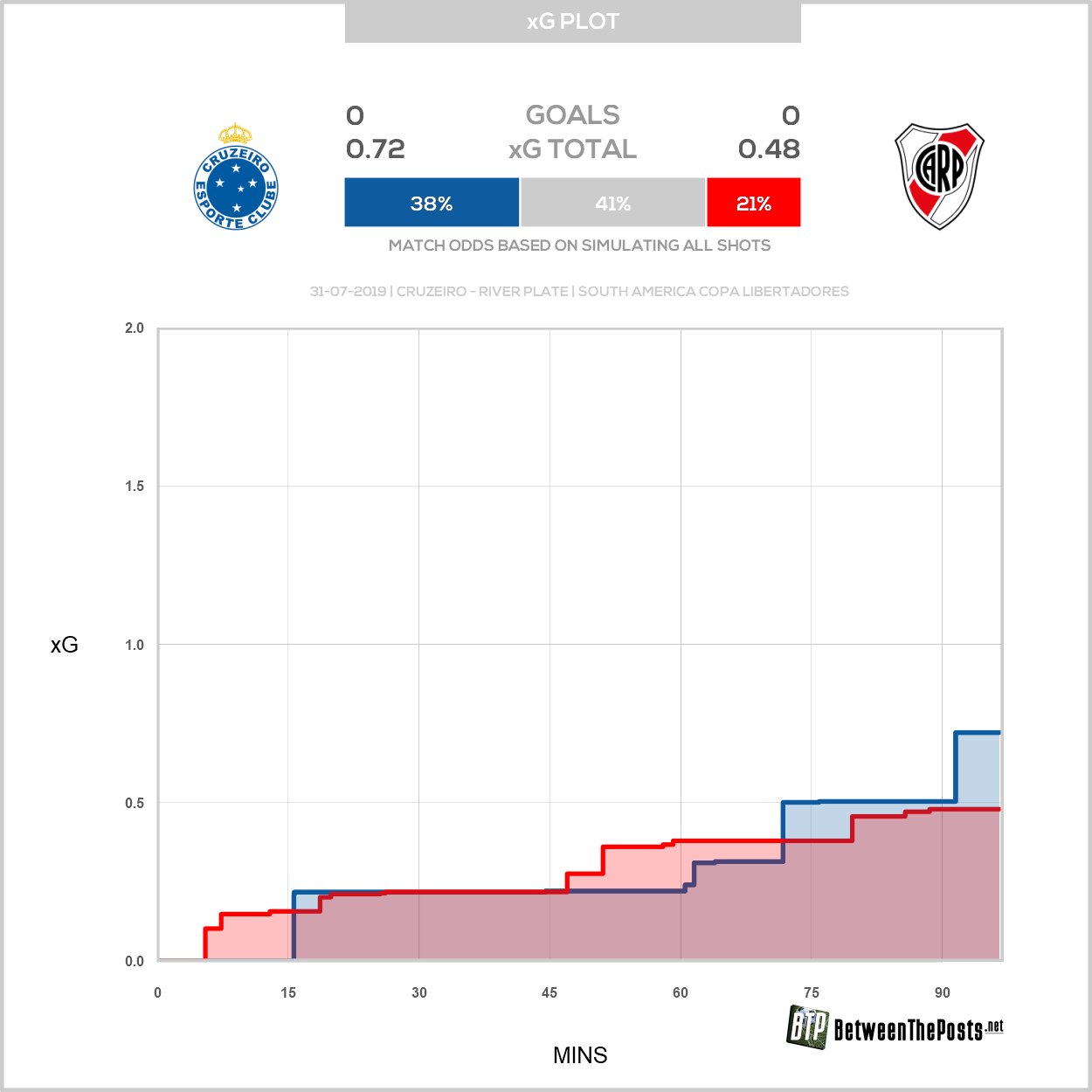 After being dominated in the first leg, Menezes’ side looked invigorated but it still was not enough. Their planning and intent displayed far more positivity but across the two legs, the reigning champions narrowly edged this contest, and were thus deserving of their qualification into the quarter-finals.

Now, the objective for Menezes is to escape the clutches of the relegation zone. Sitting in seventeenth and now facing fourth-place opposition in the form of Atlético Mineiro at the weekend, an up in form might come later rather than sooner.

River are still also haggling through a curious bout of form. They have drawn all four of their returning matches – winning both cup ties on penalties – yet they are still only one game into the new season, so it is far too early to be drawing any firm conclusions. 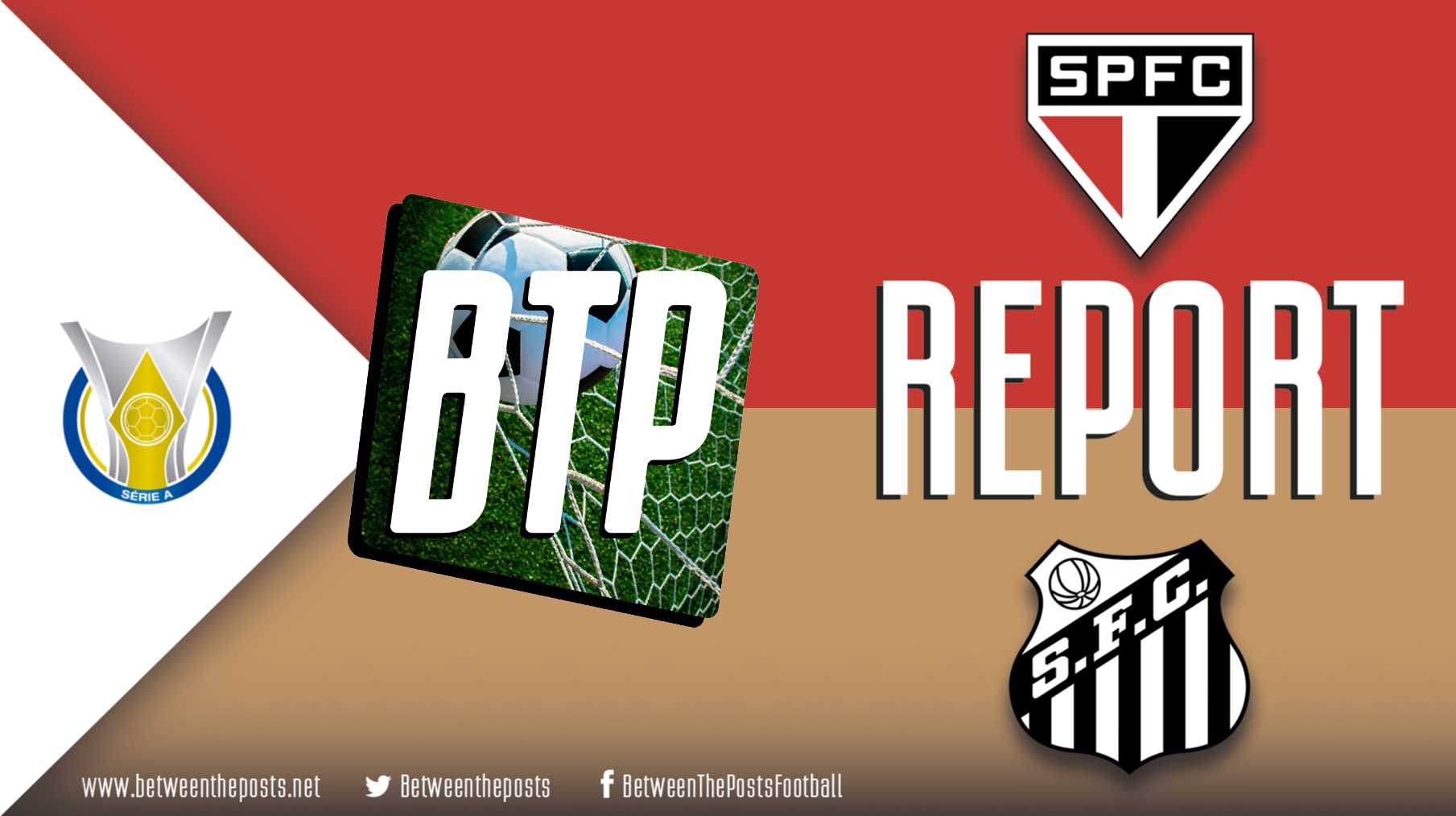 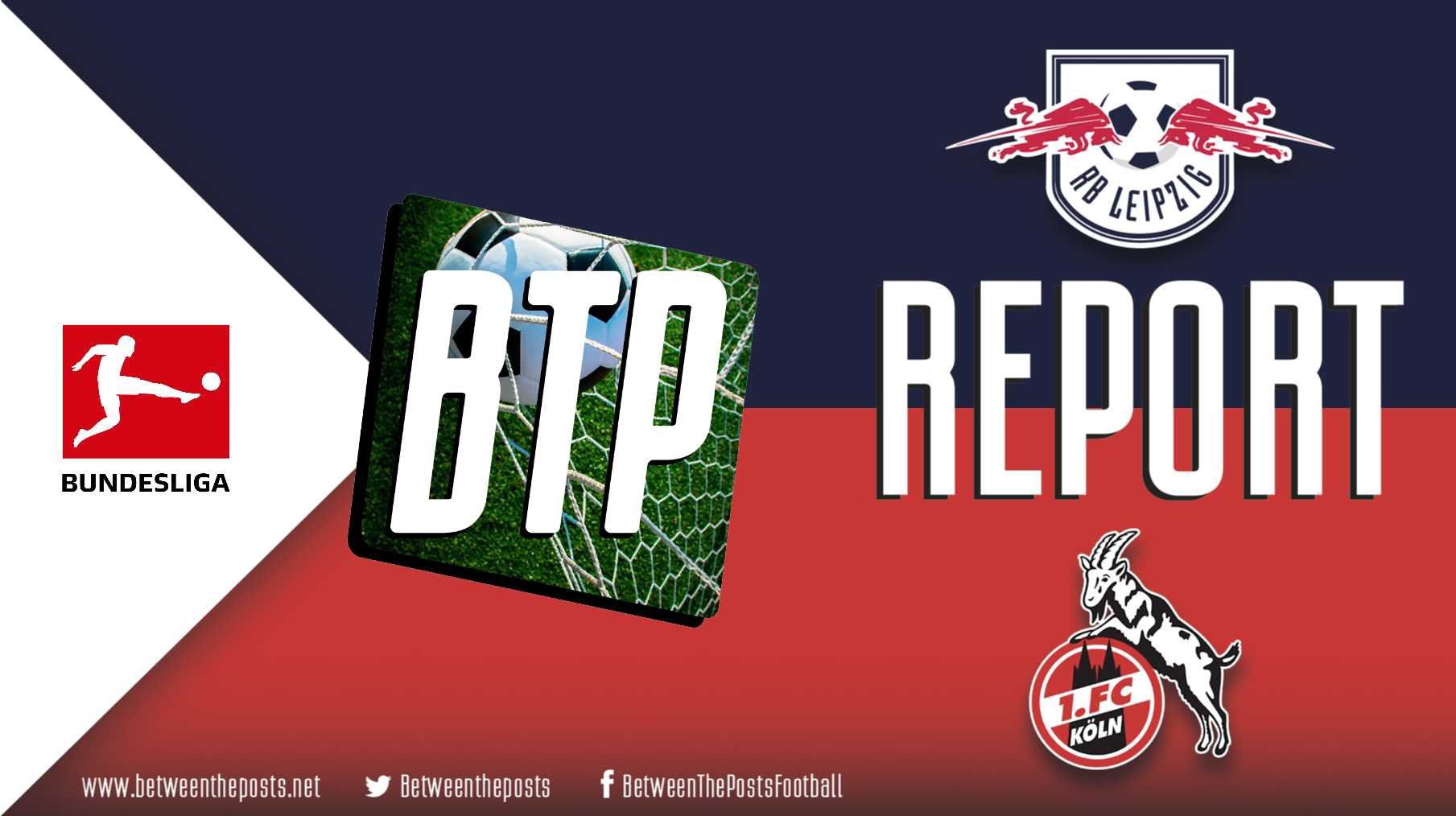