The Brasileiro schedule served up a meeting between two high profile managers. Jorge Sampaoli brought his table-topping Santos side to the home of Cruzeiro, where Brazilian football’s goalkeeping icon Rogério Ceni made his managerial debut. Cruzeiro had come into the fixture amid a relegation battle and in a poor run of form, which led to the sacking of Mano Menezes earlier this month. This made the result all the more shocking, but a closer look at the game shows how Cruzeiro capitalized on their one-man advantage from an early Santos red card.

Rogério Ceni lined up the hosts in a 4-4-2 formation. They deployed a four-man defense made of fullbacks Orejuela and Egidio, and in central defense were Dedé and Fabricio Bruno. Their midfield was centered on the double pivot pairing of Dodo and captain Henrique. The wide areas would be attacked by David and Marquinhos Gabriel, while their forwards were Pedro Rocha and Thiago Neves.

Santos manager Jorge Sampaoli set up his side in a 3-4-3 formation. The three-man backline would have captain Gustavo Henrique in its center with Lucas Verissimo and Jorge to his right and left respectively. The double pivot in midfield was comprised of the pair Evandro and Diego Pituca. Carlos Sanchez and Felipe Jonathan would be the wingbacks flanking them and the forward trio consisted of Derlis Gonzalez, Eduardo Sasha and Yeferson Toledo.

The expected flow of the game seemed to set in right from the onset. Santos kicked the game off and their wingbacks immediately pushed up the field. Their double pivot would build up the play with their back three. Cruzeiro sat back and defended in a 4-2-2-2 shape with Gabriel and David coming in narrow to mark the Santos double pivot. This meant Cruzeiro would generally be outnumbered four to Santos’ five and the visitors could retain possession easily. 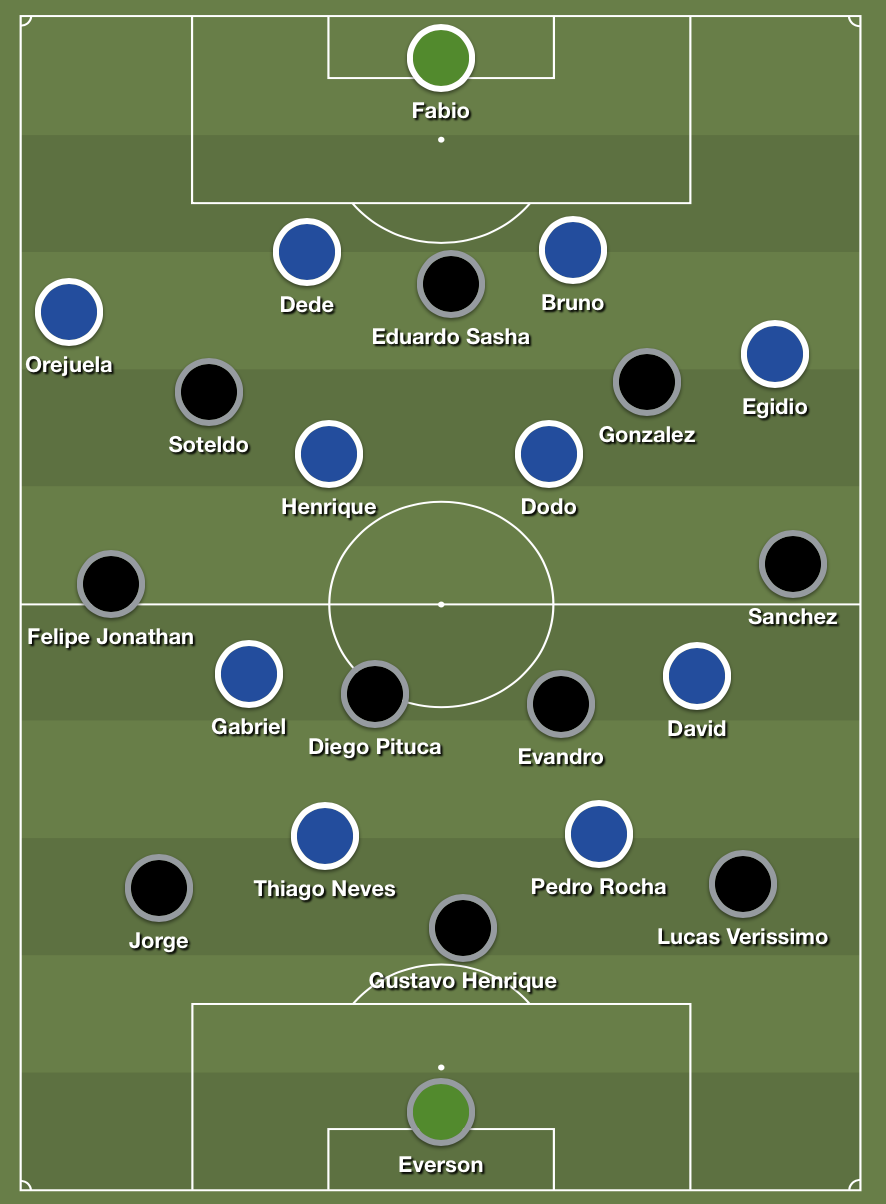 The shapes of both teams while Santos had possession in the opening minute.

That seemed to be how the game would flow. But the dynamics completely changed just a minute into the contest. After their opponents advanced into their final third, The one-third of the pitch that is closest to the opposition’s goal. Cruzeiro won the ball back and countered. David expertly skipped past a few challenges and sent a ball towards Pedro Rocha running through on goal. It looked like Rocha had won the foot race with Gustavo Henrique but a last-ditch tackle by the defender seemed to rescue Santos.

Initially, the referee waved off the protests of the home side but after consultation with VAR he eventually rechecked the incident. After a few minutes, he called over Gustavo Henrique and gave him a straight red card for his challenge on Pedro Rocha.

Sampaoli opted to sacrifice central midfielder Evandro and brought on defender Para in his place. He moved to right back, Sanchez tucked in alongside Pituca and the formation changed to a sort of 4-4-1. Santos would now sit back for much of the game, staying compact with Eduardo Sasha leading the charge and putting pressure on the Cruzeiro players in possession.

Cruzeiro dominated from here on out and the statistics emphasize this. Cruzeiro registered a significant 66% possession advantage throughout the game. They limited their opponents’ attempts at goal with Santos only managing to take three shots compared to Cruzeiro’s nineteen, while Santos only managed a paltry 0.08 expected goals. The amount of goals a team is expected to score based on the quality of the shots they take.

Tactically, Cruzeiro would have their double pivot drop back and help the center-backs in the buildup. The fullbacks would be advanced to push the Santos wingers back. The Cruzeiro wingers would also move centrally to create space for their fullbacks out wide. At times, they would drop deep to get the ball and draw out a player from the Santos low block A low block refers to a team that retreats deep in their own half out of possession, generally only disrupting their opponents around their own box. to create room for a teammate. They began to have joy in the wide areas, with the Santos fullbacks struggling to deal with the Cruzeiros wingers and their fullback counterparts. Their constant movement and positional rotations helped Cruzeiro create great opportunities.

About twenty minutes in, Rogério Ceni decided to turn the pressure up. He brought on Fred for Egidio and Fred joined Pedro Rocha up top. Dodo went to the left back position, while Thiago Neves would move back and forth between an advanced position and dropping deep to help Henrique in midfield. 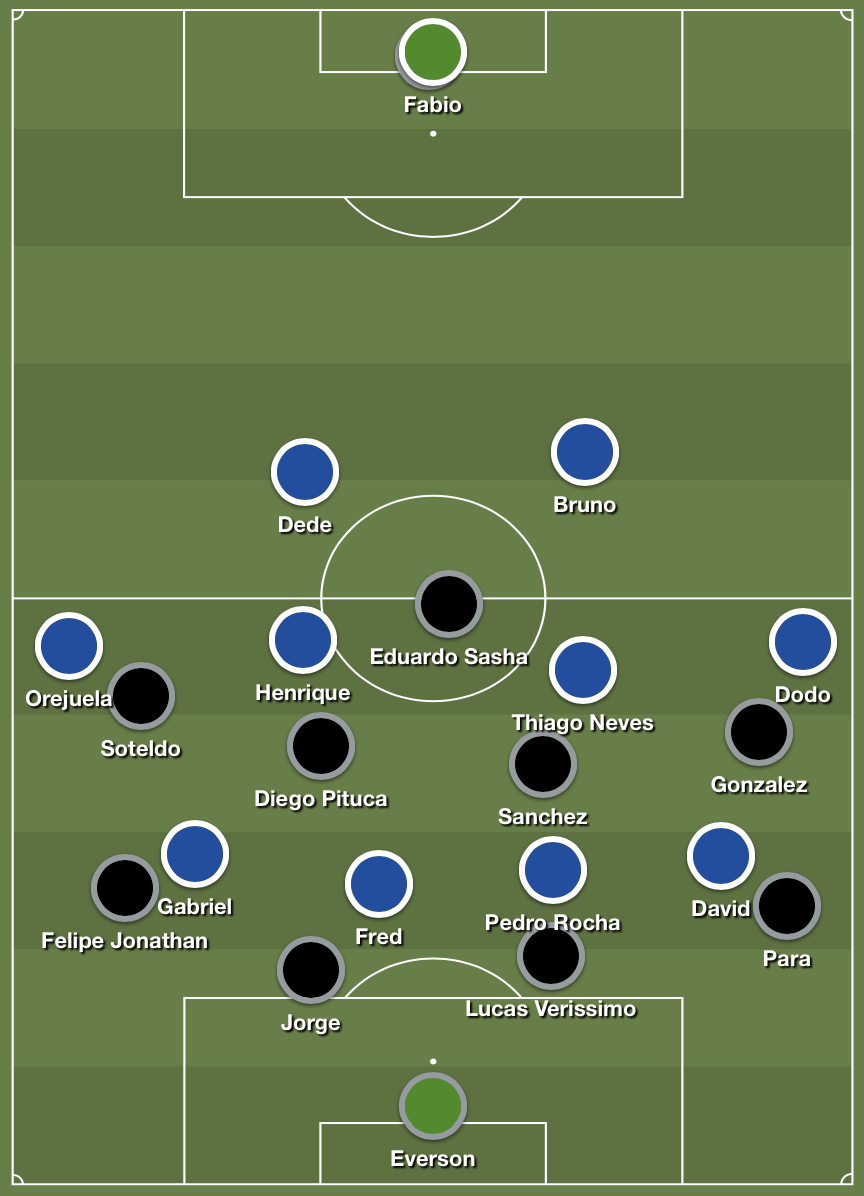 The usual positioning of the teams when Cruzeiro had the ball after the introduction of Fred.

Santos did not have much time on the ball for the remainder of the half, but one of their periods of sustained possession nearly brought disaster. After a corner was cleared, the ball was worked back to Jorge and he was faced with a pressing Fred and little passing options. He did well to evade Fred and give the ball to a recovering Para. He immediately lost the ball after being pressured by Fred and Henrique and it was an instant two-versus-one situation for Cruzeiro. Luckily for Santos, Pedro Rocha produced a poor through ball to Thiago Neves and the ball trickled out for a goal kick.

Soon after though, Cruzeiro had the lead.

David had picked up the ball on the left and drifted centrally. Thiago Neves was floating between the Santos defensive and midfield lines, where David could pick him out. He turned near the Santos box but failed to pick out a marked Fred with a pass. But the ball fell to Henrique who was in space between the lines as well.

Santos simply could not keep track of opposition players while a man down. Henrique then passed to Thiago Neves who played a first-time ball over the top for Fred. The striker used his body well to shield the challenging defenders and finished clinically past Everson. 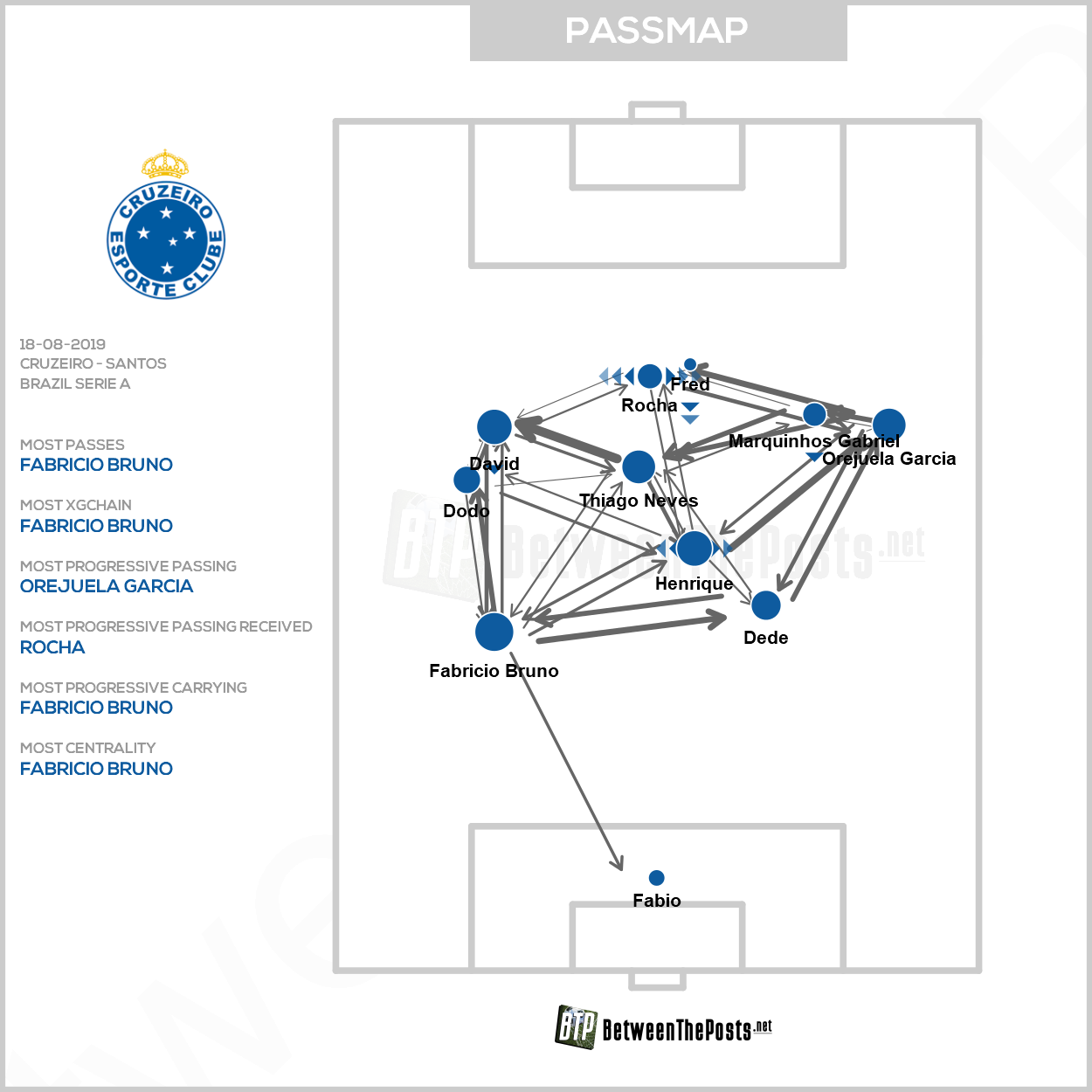 The beginning of the second period saw the effective end of the game as a contest.

Sampaoli took off first-half substitute Para and introduced Luiz Felipe into the right back slot. The formation in the opening minute of the second half looked to be comprised of a front three and a back five. It later organized into a sort of 4-2-3 shape but was not like that initially

The shape left acres of space between the lines and Cruzeiro exploited this. Bruno found Pedro Rocha dropping between the lines, completely unmarked. He played it to Fred and made a run towards the Santos backline. The first-half goal scorer seemed to try to play the one-two with Pedro Rocha, but overhit the ball slightly. Instead, there was Thiago Neves at the edge of the box as well, so when the ball missed Pedro Rocha’s run, it fell to him. Thiago Neves sent the stands into a frenzy with a brilliant first-time finish with his left foot into the bottom corner, doubling the Cruzeiro lead.

The game then fell to a predictable pattern. Long spells of Cruzeiro possession where they were happy to probe the Santos backline, waiting for an opportunity to attack. Cruzeiro attacked the wide areas time and again, creating multiple chances which they failed to take. Santos, on the other hand, struggled to hold the ball, settling for long balls on most occasions. Whenever they did have possession, they could not effectively penetrate the home side’s defense. Cruzeiro kept control of the game and could have scored more while they saw it out till the end.

The early dismissal flipped the script entirely. Looking at the two sides’ form going into the game, one can’t help but feel that things would have gone differently had Santos not lost their captain a minute into the game. Cruzeiro will not care though as they moved a point out of danger. Santos remain two points clear at the top and likely won’t take much stock into the result due to the circumstances.

Use the arrows to scroll through all available match plots. Click to enlarge.
Check the match plots page for plots for all other matches. 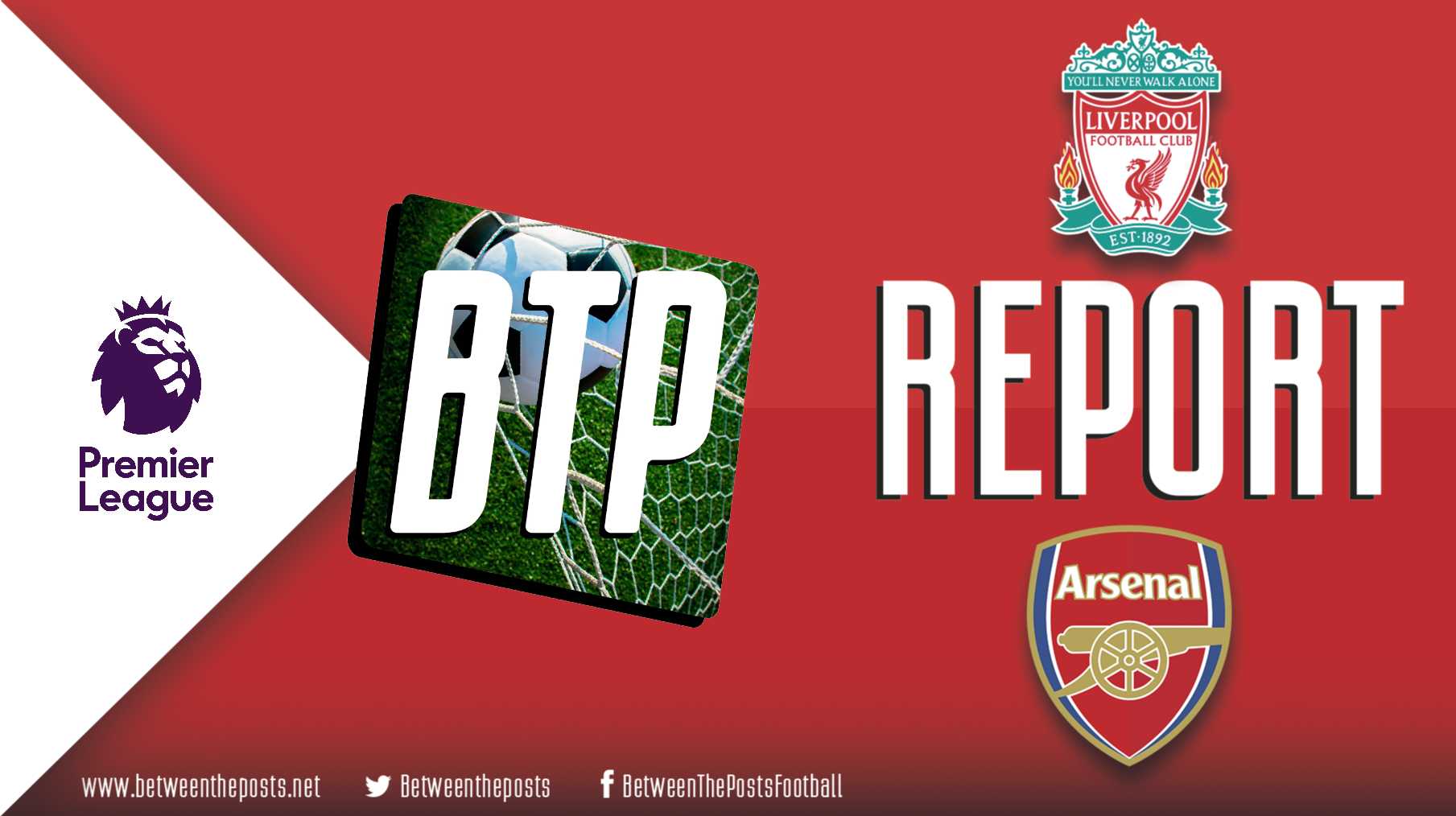