The Champions League’s third qualifying round served up a truly exciting game of football. The hosts, Dynamo Kyiv, came into this clash looking to overturn a 1-0 deficit from the first leg. Their opponents, Club Brugge, were looking to hold firm and secure a spot in the playoff round. Ninety minutes later the final whistle allowed us to catch our breaths. End-to-end attacking and transition play highlighted a truly dramatic tie.

Dynamo Kyiv manager Alyaksandr Khatskevich lined up the home side in a 4-3-3 formation. Their backline had Tomasz Kedziora and Vitalii Mykolenko as fullbacks who would frequently support the attackers during offensive play. Volodymyr Shepelev would be the deepest midfielder flanked by Vitaly Buyalskyy and Oleksandr Andrievsky,while the frontline was made up of nominal wingers. Viktor Tsygankov and Benjamin Verbic flanked striker Gerson Rodrigues.

Phillipe Clement matched his counterpart and sent Club Brugge out in a 4-3-3 shape as well. Mats Rits would be the Shepelev equivalent, sitting as the deepest part of the midfield three. He would have Ruud Vormer and Hans Vanaken to his sides. Fullbacks Clinton Mata and Eduard Sobol would also provide attacking support. The attacking trio consisted of  Percy Tau and Emmanuel Dennis as wingers flanking David Okereke up front.

Kyiv would advance their fullbacks up high during their buildup, with Shepelev dropping to form a triangle with the center-backs. They would look to break past the first line of pressing while Buyalskiy and Andrievsky would stay high to pin the Brugge midfield back. Brugge would be organized in a 4-4-2 structure while defending with Tau dropping back to form a midfield four. They would aggressively press often, usually when the ball was headed back to goalkeeper Denys Boyko. Kyiv struggled with building up the play on the ground and enjoyed most success from long balls and in transition after winning the ball back.

Kyiv employed long balls in various ways. They would have the wingers start wide and move more centrally to create space for a fullback to charge into. They would then look for the fullback with a long ball as they made their run. Goalkeeper Boyko did very well early on, finding left back Mykolenko often as he made runs behind Tau. Other times they would send it long towards striker Rodrigues to hold it up, which he did well against multiple opponents. Alternatively, Rodrigues would try to find a teammate with a layoff. 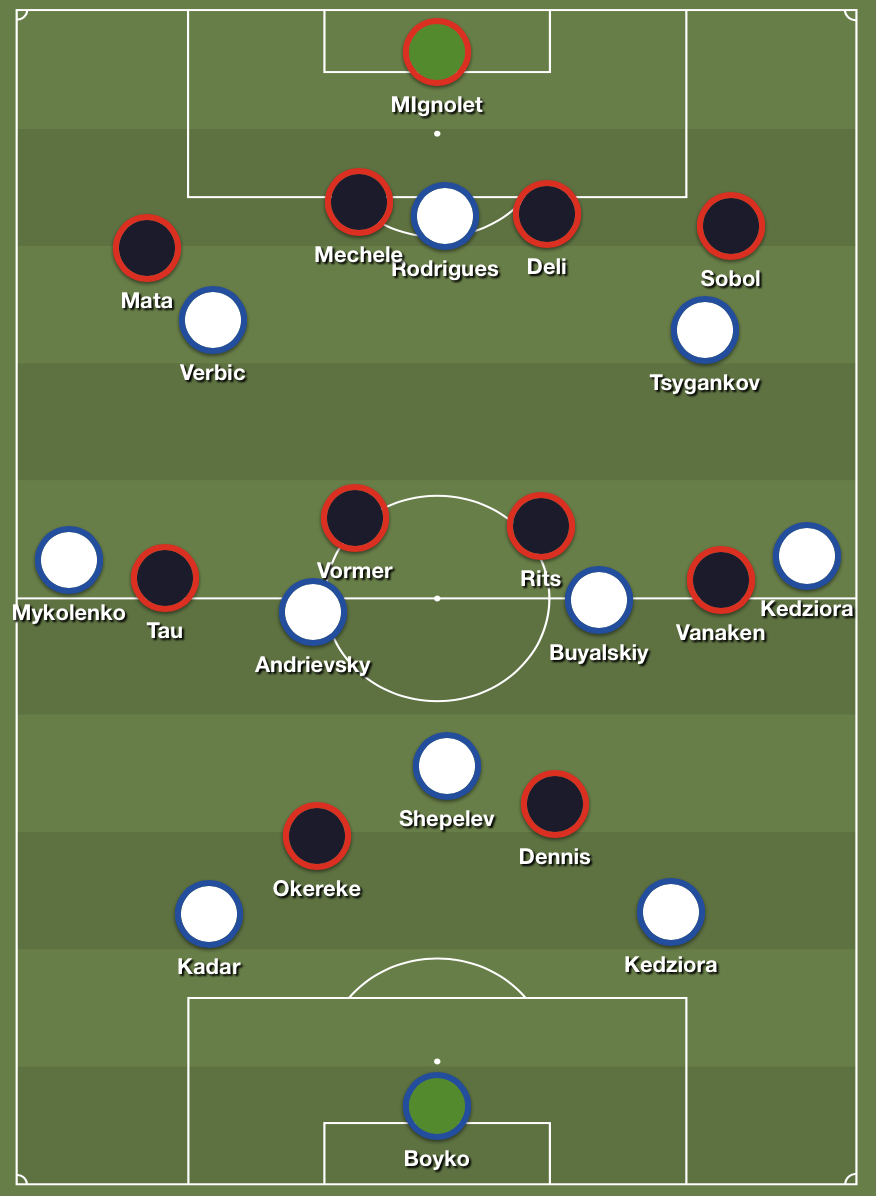 This was the normal setup when Kyiv were in possession. Pressing from Brugge would start from the front two and they would be joined by one of the midfield four.

The away side played similarly when on the ball and had a better time penetrating their opponents. Kyiv defended slightly differently to Brugge and they won back possession many times in dangerous areas. In the defensive phase, Kyiv would use a 4-5-1 shape when they dropped back and tried to stay compact, primarily looking to deny spaces between the lines and in advanced areas.  But at times, they would press high up the pitch in a 4-3-3 shape hoping to make Brugge play a long ball or give away possession. 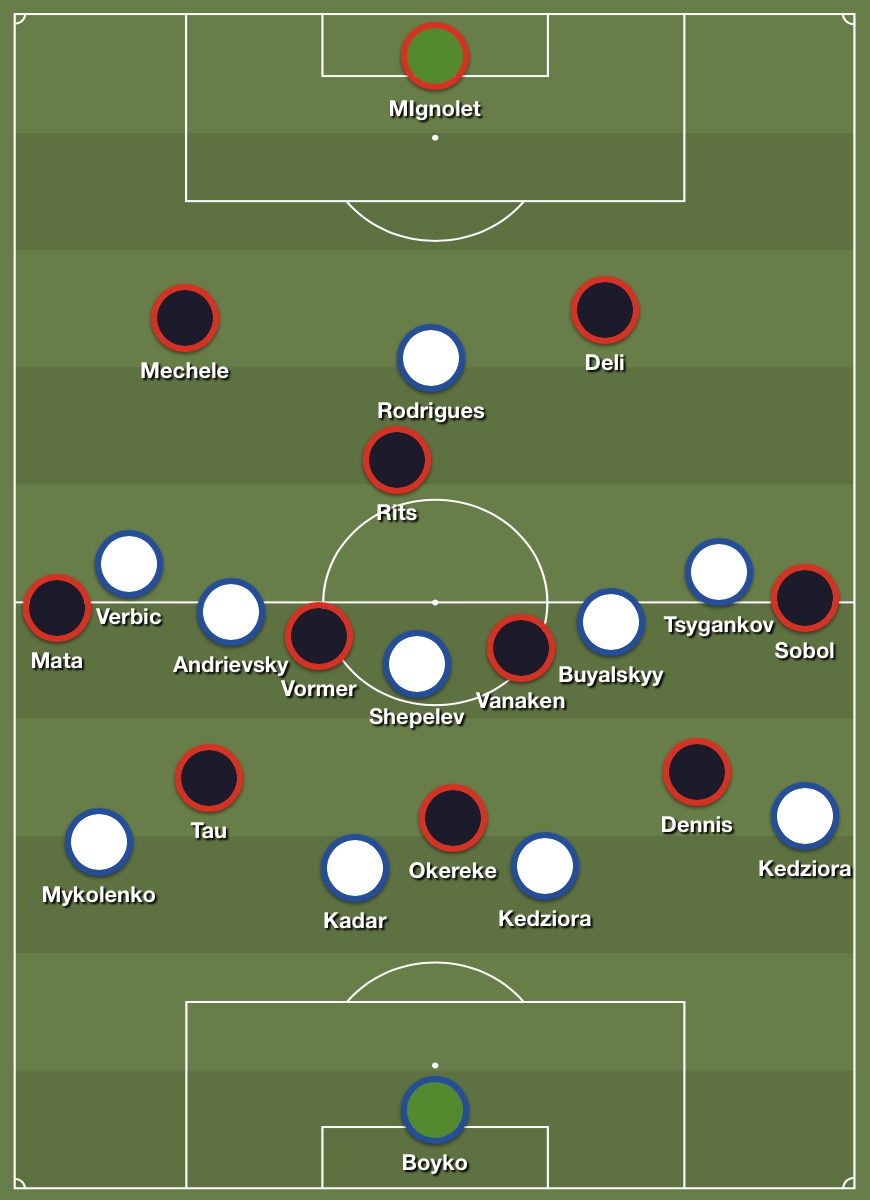 This was the usual situation whenever Brugge had the ball. Verbic and Tsygankov could push forward to press with Rodrigues in a 4-3-3 shape.

Kyiv’s high press is exactly what led to the first goal. Mignolet played a short pass to Deli from a goal kick. He was pressured and had little option but to send it long. Kyiv won possession and transitioned quickly to score. Quick circulation of the ball led to Mata facing a two-versus-one situation. Verbic fed an overlapping When a wide player, most of the times a wing-back, runs outside to fill in the space left by a winger going inside with or without the ball, this is called overlapping. Mykolenko who crossed it low for Buyalskiy to place home. Kyiv got quite a lot of joy attacking the right side of Brugge’s defense in the early stages. This may have been due to Tau’s poor tracking of Mykolenko.

When Brugge had the ball they would also have their fullbacks push up high, while Rits dropped to assist the center-backs in the buildup. They would more often have a midfielder or even a winger drop back to receive the ball between the lines.

This pattern was particularly emphasized on their right-hand side where the positioning of Mata, Vormer and Tau gave Kyiv problems early on. Brugge certainly had the better going when building up and finding players between the lines. They created many dangerous situations such as the one that led to the corner that they equalized from. Mata was found in space and he then found Tau running in behind Mykolenko. His cross was blocked for the corner which Deli ended up heading into the goal. 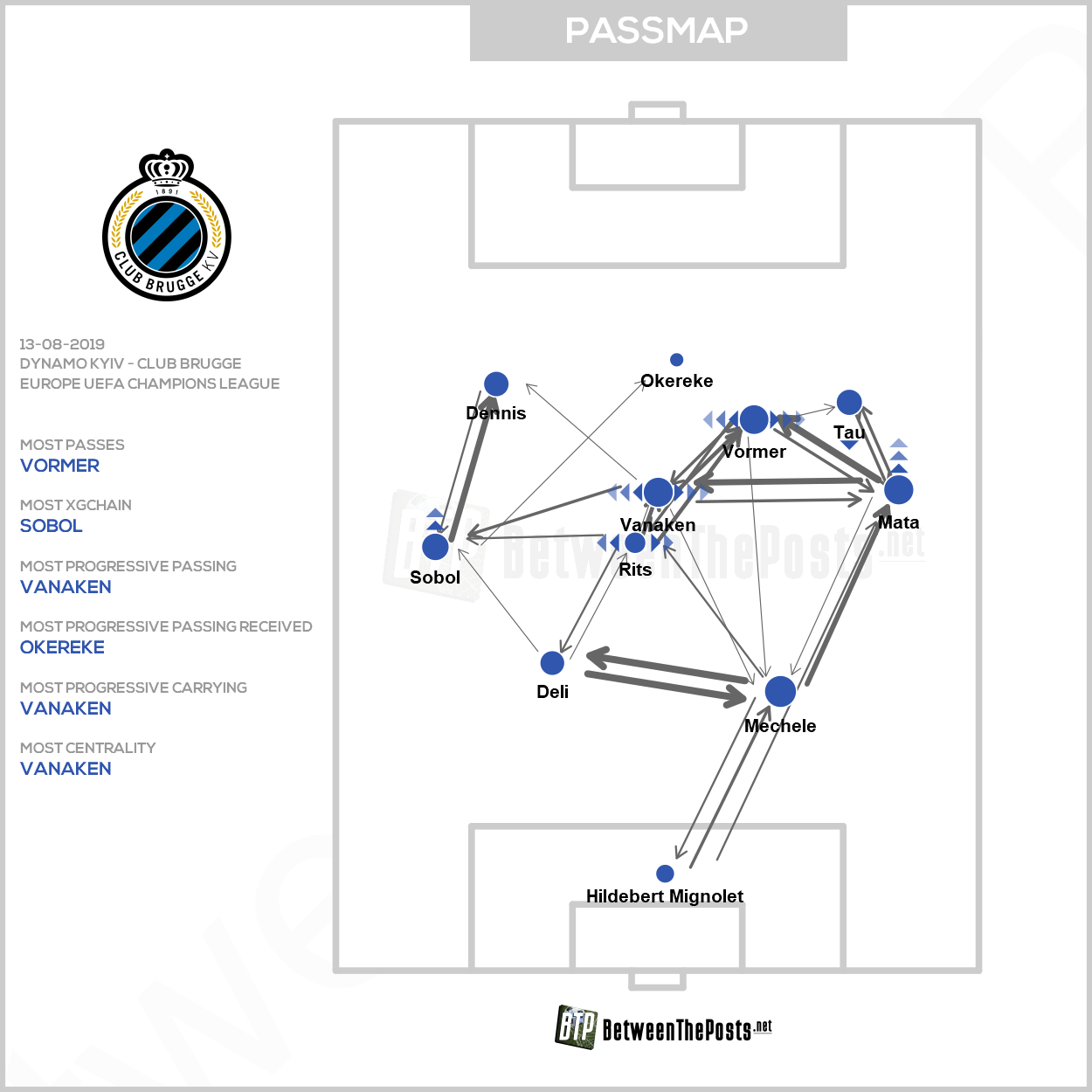 Kyiv in need of goals

Needing at least two goals to advance, Kyiv made some half-time changes. The introduction of midfielder Carlos de Pena for Andrievsky was significant as he immediately looked very confident on the ball and provided some much-needed quick passing and penetration to spark the Kyiv offense.

It was his pass, after collecting a poor Brugge clearance, that found Tsygankov bursting from midfield. The winger then passed to Verbic who cut inside and shot against the post. The rebound fell to Shepelev and Kyiv regained the lead five minutes after the restart of play.

De Pena was also an asset in the long ball strategy. In one instance he won a battle to flick a long ball from Boyko right into the path of an advancing Tsygankov behind him. He then collected the return ball and was charging into midfield. This sequence of play led to Verbic in a one-versus-one situation which fell apart due to a poor through ball attempt from the Kyiv winger. 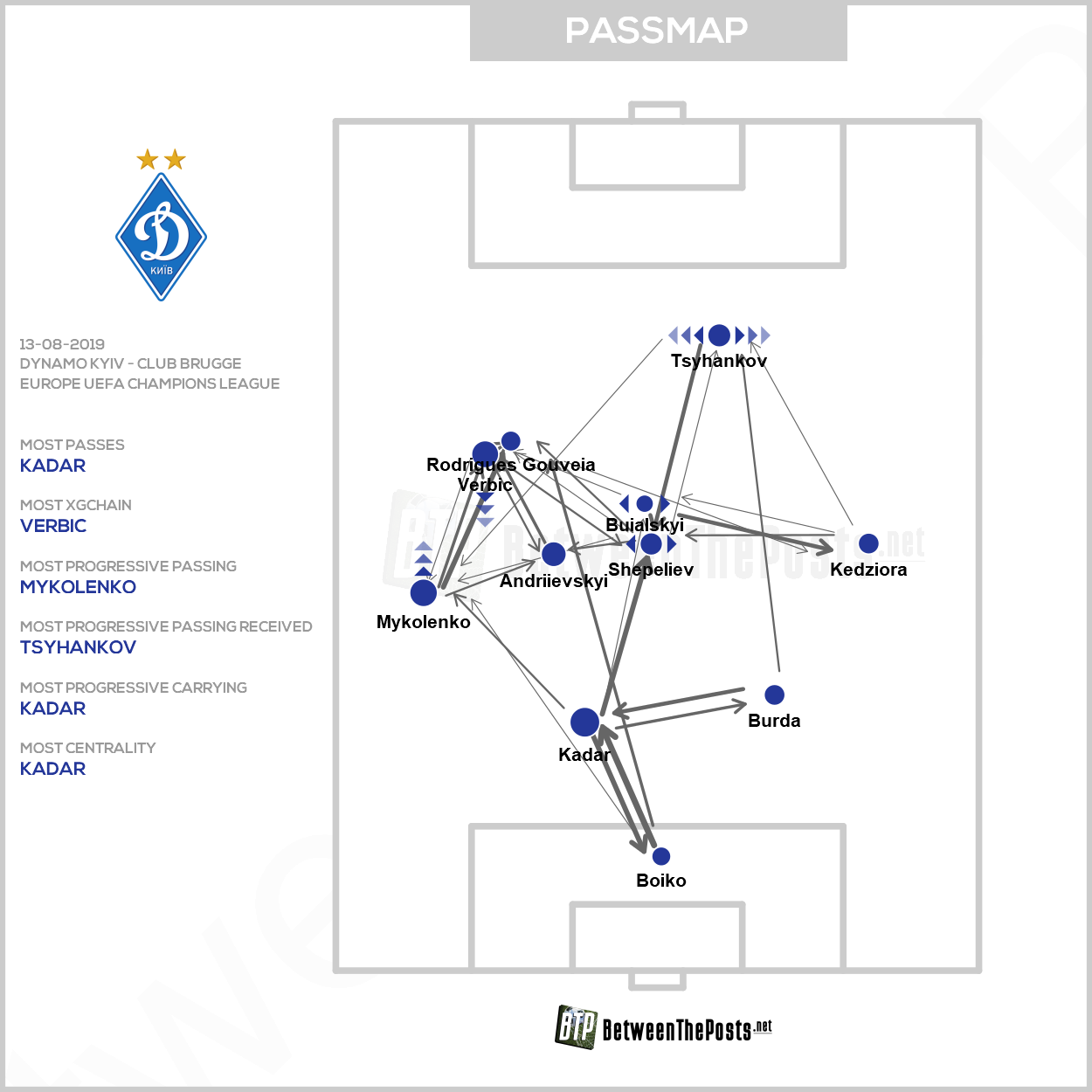 With Brugge still ahead on away goals, it was Kyiv who had to assert themselves during the game. While Brugge continued in much the same way they had done in the first half, eventually the game settled into the familiar flow of the first half.

Kyiv mainly threatened on the counter after winning the ball back, while Brugge kept possession well and created some decent chances.

This pattern held until the final ten minutes, which is when chaos ensued.

Kyiv center-back Mykyta Burda was sent off after collecting his second yellow card trying to stop a counterattack near the edge of the Kyiv box. Instead of making a defensive change, Khatskevich immediately brought in striker Fran Sol for Shepelev as they were still in need of a goal. Their disadvantage did not last too long as Brugge were soon down to ten men as well. Tau picked up his second yellow card after colliding with Boyko from the very free kick that Burda gave away. This instantly swung the momentum in Kyiv’s favour, and they pressed on for the goal they needed.

Kyiv’s hopes seemed to be dashed as two minutes from time, Vormer scored for Brugge. Lois Openda, who came on for Okereke, received a throw-in at the edge of the box. He turned his marker and fed Vormer to expertly finish first time into the bottom corner.

A third of the way into the six minutes of added time, Kyiv took the lead again. Fran Sol sent a header from a late corner towards goal. The ball seemed to be heading directly towards Mignolet for a comfortable grab but then defender Brandon Mechele inadvertently diverted it past Mignolet trying to clear it. The tie was back on.

However, as Kyiv pushed for a goal, they got caught on the counter. Openda capped off a good individual cameo by finishing past Boyko from a Krepin Diatta through ball. This was the nail in the coffin for Kyiv. 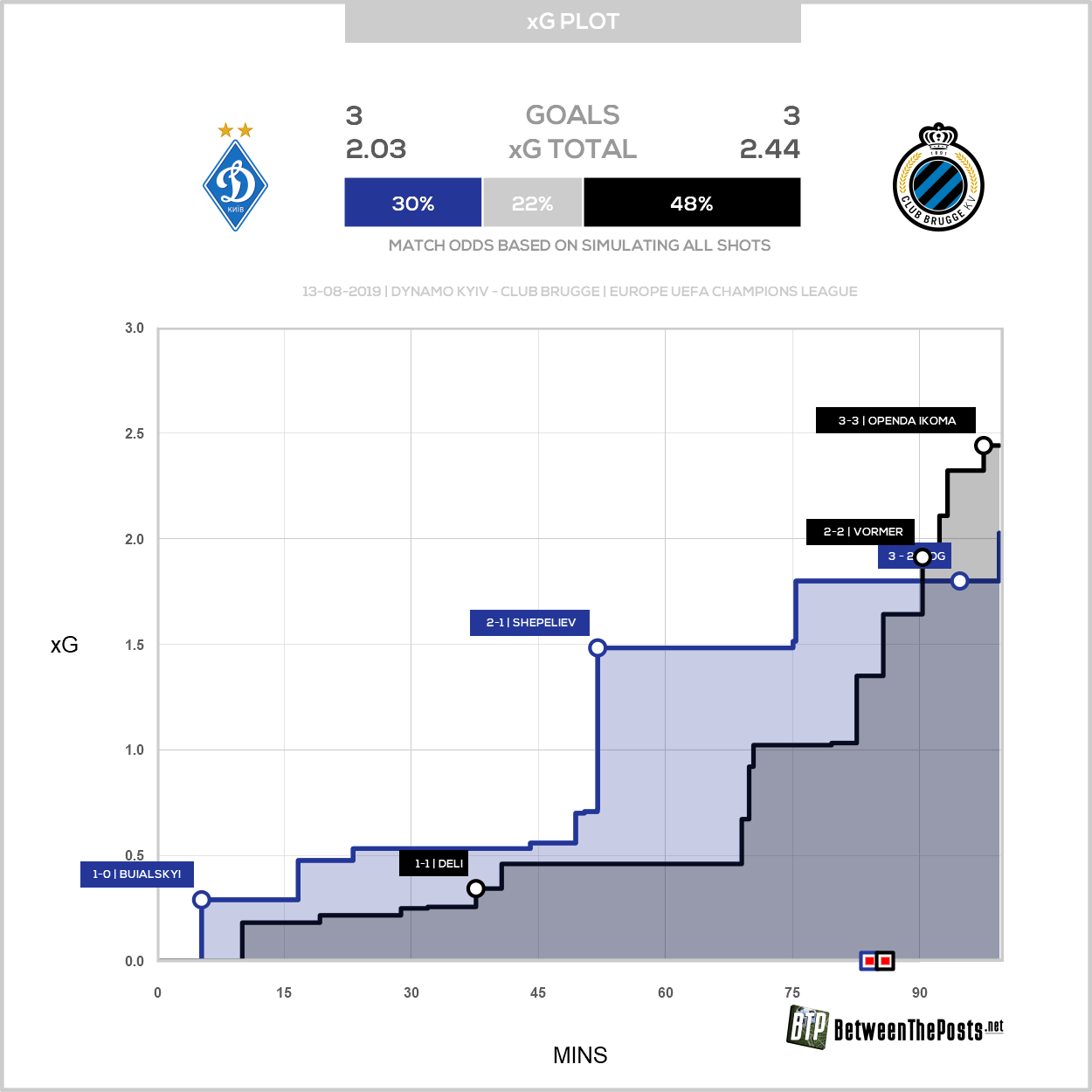 Both sides attacked well and this led to an intense, end-to-end encounter. Kyiv may have struggled to build in possession, but made up with effective transitions and always posed a threat to the Brugge backline. The visitors, on the other hand, kept the ball well and generally looked the more threatening side while in possession.

Club Brugge now advance to take on Austrian side LASK in the playoff round of qualifying. Kyiv fall into the Europa League group stages. On the evidence of this game, both sides will certainly be ones to watch during this European football campaign. 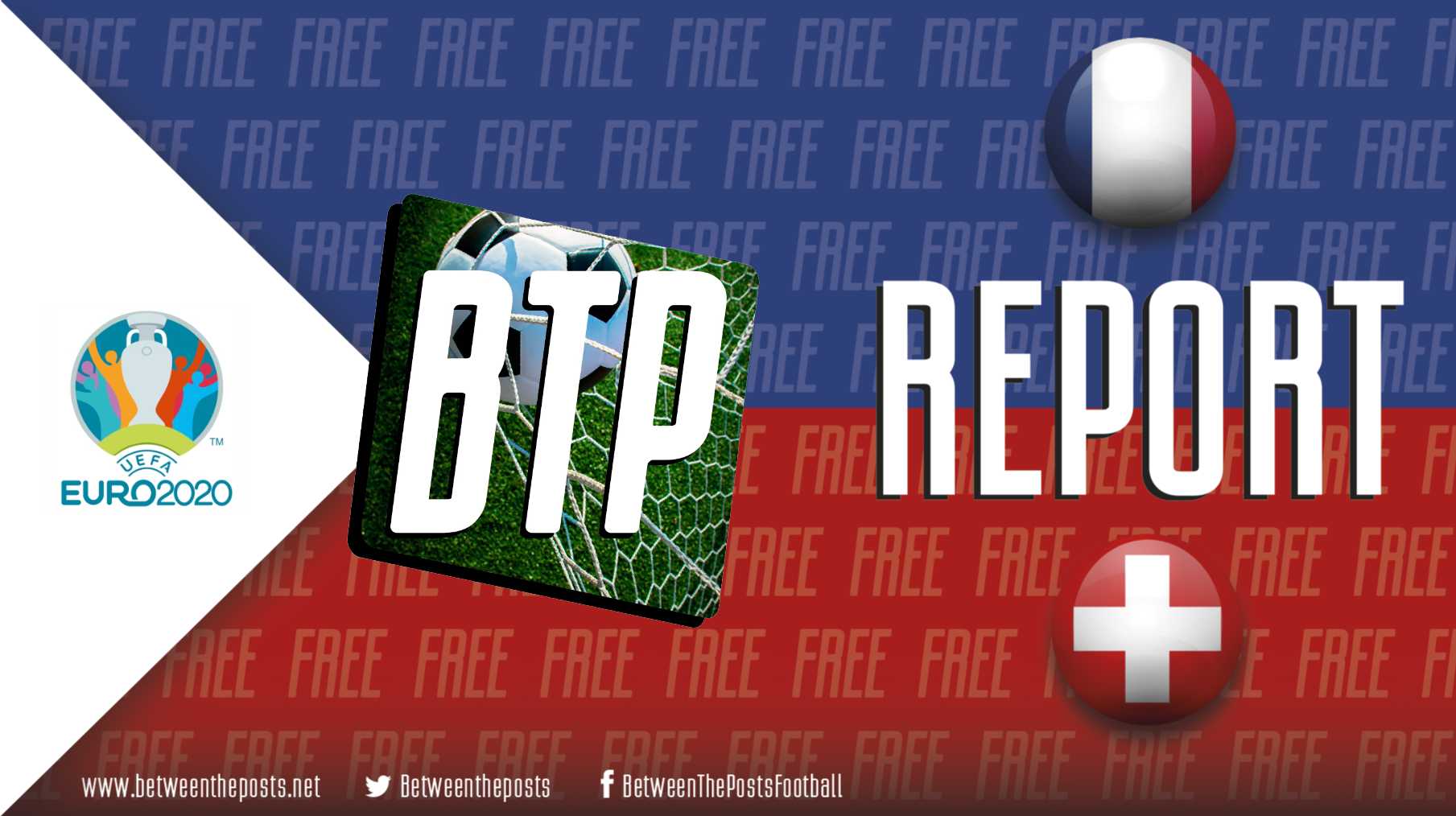