The movement of Bayern’s attackers was the highlight in this match as they made short work of Frankfurt. Their smart positioning between the lines and threat in behind the Frankfurt defense allowed them to have the game won by half-time.

Bayern Munich kicked off the post-Lewandowski era in style last time out as they beat Leipzig 5-3 in the DFL Supercup. They faced another potentially tough challenge to start the Bundesliga season in the form of a trip to Europa League winners Eintracht Frankfurt.

Julian Nagelsmann lined his side up in a 4-2-3-1 shape. The front four consisted of Sadio Mané, Jamal Musiala, Serge Gnabry and Thomas Müller. Supporting from midfield were Joshua Kimmich and Marcel Sabitzer. In the defensive line, Benjamin Pavard and Alphonso Davies were the fullbacks either side of Dayot Upamecano and Lucas Hernández.

Frankfurt have made additions to their squad since their Europa League victory, most notably with the signing of former Borussia Dortmund and Bayern player Mario Götze. He started for the home team in this match as part of the front three in their 3-4-3 system alongside Rafael Santos Borré and Jesper Lindstrøm.

In central midfield were Sebastian Rode and Djibril Sow, flanked by wing-backs Ansgar Knauff and Filip Kostić. At the back, Frankfurt now find themselves without Martin Hinteregger to call on after his surprise retirement. Instead, Almamy Touré, Tuta and Evan Ndicka were selected as the back three for this match, the same trio that started in their Europa League Final against Rangers.

Nagelsmann’s side enjoyed pretty much the dream first half as they found themselves 2-0 up within ten minutes, and 5-0 up by half-time. This was in large part thanks to the devastating movement up front against a relatively passive Frankfurt defensive arrangement.

Bayern built up in a 4-2-3-1 shape in which the front four – Müller, Gnabry, Mané and Musiala – were relatively interchangeable and made a wide range of movements. A common interaction were crossover movements between the quartet, whereby they would attempt to get free between the lines by swapping the vertical lanes they were occupying.

They often found themselves in a 4-2-2-2 arrangement, as two of the four would drop off between the lines in the halfspaces, If you divide the field in five vertical lanes, the halfspaces are the lanes that are not on the wing and not in the center. Because there is no touchline like on the wing, players have the freedom to go everywhere. But this zone often is not as well-defended as the very center. This makes it a very valuable offensive zone to play in and a lot of chances are created by passes or dribbles from the halfspace. while the other two threatened the space in behind, which also helped to pin back the Frankfurt defenders to create more space between the lines.

Musiala in particular had success with his indenting into the left halfspace, particularly early on. The crossover movement from another attacker occupying the center moving diagonally towards the left allowed Musiala to drive forward with the ball as the Frankfurt defense could not step out. 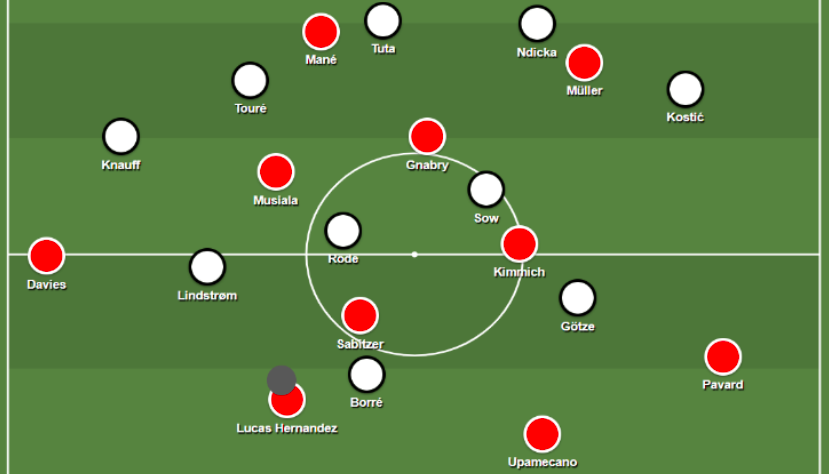 The Frankfurt central midfielders were also fixed by the central midfielders of Bayern, which further opened the halfspaces. This compounded Musiala’s advantage in these early situations, as Sabitzer would drift slightly deeper and more towards the center to open the left halfspace for Musiala.

Bayern were quite focused on the central or ball-near areas throughout their attack, with less focus on always stretching the width. One or both wings could sometimes be unoccupied, as the fullbacks often preferred to attack from deeper rather than taking up high and wide positions early on in the buildup.

Bayern move down a gear

With the 5-0 scoreline at half-time the game was pretty much over already at that point. Frankfurt made a triple change at the break as Lindstrøm, Rode and Borré departed to be replaced by Christopher Lenz, Kristijan Jakić and Randal Kolo Muani.

Frankfurt’s relatively passive defending in their 5-4-1 shape had not helped in the first half as it allowed Bayern time to prepare their attacks from the halfway line and find the incisive passes into the feet of the forwards.

This did not change too much at the start of the first half, as Frankfurt still mostly allowed Bayern easy control of the match with the ball, although Bayern’s own intensity was now lower. There were occasional Frankfurt transitions, and they did manage to get the ball in the net.

The first occasion was disallowed by VAR for an offside, while the second occasion saw them bring the scoreline to 5-1 courtesy of Kolo Muani’s first goal for the club. It arose from a mistake from Manuel Neuer as he got himself in trouble on the edge of the box trying to control a poor backpass from Hernández, allowing Kolo Muani to pounce and roll the ball into an empty net.

After this goal, Frankfurt were at least a bit more lively. For the first time in the match they had some spells of gaining territory into Bayern’s half. Bayern meanwhile brought on a couple of their own substitutes as Gnabry and Müller made way for Mathys Tel and Leroy Sané, adding to the earlier substitution that saw make his Bundesliga debut, replacing Sabitzer.

Bayern quickly got back on top after the slight improvement from Frankfurt though, and the last twenty minutes or so were once again very comfortable for them. In fact, they were able to further add to the scoreline once again through the outstanding Musiala who added his second of the game to make it 6-1.

The #Bundesliga opener proved to be an easy task for @FCBayernEN. 👏

Bayern put on an extremely strong showing here, as their movement in attack was particularly impressive. They will be extremely difficult to stop in their quest for yet another Bundesliga title.

Frankfurt disappointed a bit with their passivity even though they were up against a great opponent. Their defensive structure was not cut out to deal with the patterns Bayern were able to throw at them. 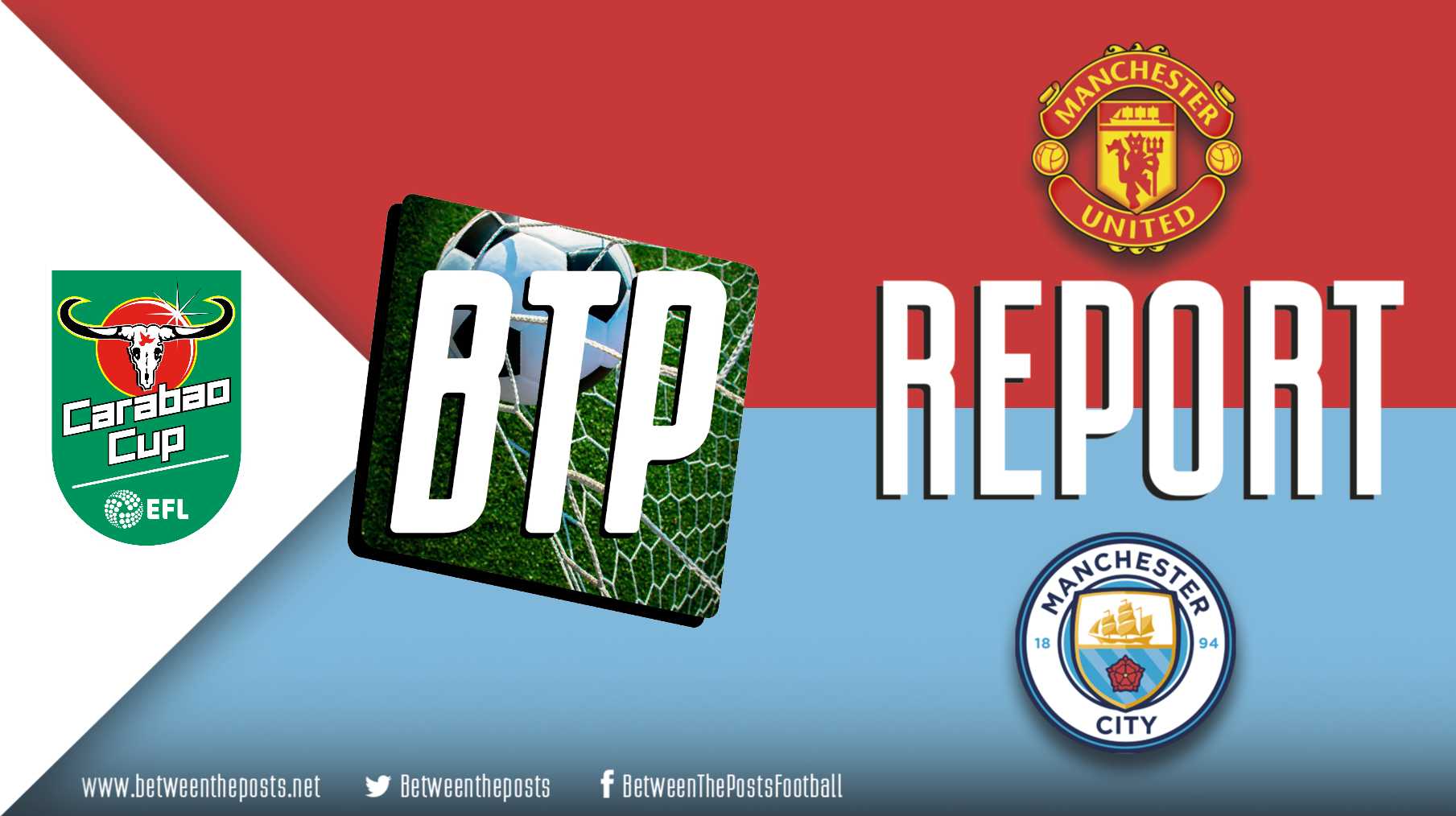