Though Atlético Madrid looked the better team early on, Real Madrid held out and found the back of the net twice before the end of the first half. Excellent game management through patient possession kept them ahead, though Atlético Madrid made it difficult for the last ten minutes after Mario Hermoso scored from a corner kick.

It has been an up and down start to the season for Atlético Madrid, with Diego Simeone’s side taking ten points from their first five matches. They came into the Madrid Derby in seventh place in LaLiga, with the chance to break into the top four with a win over their city rivals. Atlético Madrid were looking to get back to good form, with their most recent match being a disappointing 2-0 loss to Bayer Leverkusen in the Champions League in the midweek.

Simeone had a number of injuries to contend with when picking his starting eleven, with José María Giménez, Stefan Savić, Sergio Reguilón, and Thomas Lemar all set to miss the derby. Though he was not expected to be fit to play, Jan Oblak was handed the start in goal, with Marcos Llorente, Felipe, Axel Witsel, Reinildo Mandava, and Yannick Carrasco making up the back five. Ahead of them was a midfield trio of Rodrigo De Paul, Geoffrey Kondgobia, and Koke, with João Félix and Antoine Griezmann forming a striker partnership up top.

Unlike their crosstown rivals, Real Madrid could not have started the season any better. Going all the way back to the UEFA Supercup, Real Madrid have won all eight of their matches this season across all competitions, the only team in Europe yet to drop points this season. However, they had been overtaken in the LaLiga standings by eternal rivals Barcelona due to their win earlier in the matchday, with Carlo Ancelotti’s side having the ability to regain the top spot with a win over Atlético Madrid.

Real Madrid were again without talismanic striker Karim Benzema, and though Real Madrid do not have a proper replacement for the Frenchman in their squad, their other forwards have all stepped up massively in their time of need. All three players who made up the forward line against Atlético Madrid, Vinícius Júnior, Rodrygo, and Fede Valverde, have contributed multiple goals or assists in the two games that Benzema has missed. Behind them, Luka Modrić, Aurelien Tchouaméni, and Toni Kroos made up the midfield, with Dani Carvajal, Éder Militão, David Alaba, and Ferland Mendy as the back four.

The first five minutes of the match saw very little football, with most of the time being taken up by fouls and the consequent bust ups between the teams. It was evident that both teams were riled up, and it took the sides a few minutes to calm their nerves as they grew into the match.

Atlético Madrid grabbed a hold of the match as it wore on, utilizing their high press to keep Real Madrid from getting out of their own half. They possessed the ball well once they recovered it, using their width to keep the ball out of Real Madrid’s hands. When attempting to progress the ball, Atlético Madrid would use their respective wing-back, wide midfielder, and striker on each side to try and create overloads to break down Real Madrid. Whilst this was not the most effective method, it did force Real Madrid to allocate more players to one side to close down their opponents, which allowed Atlético Madrid to quickly switch the ball to the other side of the pitch, where they always had their other wing-back free. They created a number of chances early on, especially from set pieces, but they could not capitalize on their early momentum. 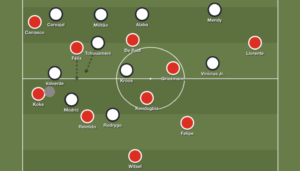 10th minute. Atlético Madrid try to create a triangle with Koke, João Félix, and Yannick Carrasco as they try to break into the final third.

Out of nowhere, Real Madrid go ahead

After eighteen minutes had passed Real Madrid created their first chance of the match, which resulted in the go-ahead goal. It was a slick move from Real Madrid, quick but patient in the buildup phase, with Fede Valverde picking up the ball from the right side of midfield. He carried the ball across the field, totally disrupting Atlético Madrid’s midfield. The ball eventually found Rodrygo on the left wing, where he cut in and gave the ball to Aurelien Tchouaméni. Tchouaméni played an inch-perfect ball over the top of Atlético Madrid’s back line into the penalty area, where Rodrygo slammed it home with an audacious half volley.

After the goal, Real Madrid found their footing in the match. They began to gain more and more possession, and with it more control of the match. They moved the ball with patience as they broke down Atlético Madrid, but their best chances came from their quick play, loosing their forwards in behind Atlético Madrid’s slower center-backs. It took a bit of time, but Real Madrid’s forwards had finally begun to get behind their defensive counterparts, and it only benefited the away side.

In the thirty-sixth minute of play, Real Madrid found the goal that doubled their lead. Luka Modrić was finally able to find Vinícius Júnior in behind after the Brazilian had lost his marker Marcos Llorente, leaving Vinícius Júnior free to go at the Atlético Madrid goal. He carried the ball nearly to the six-yard box, and his low shot bounced off of the near post, falling across the face of the goal. The first player to meet the ball was Fede Valverde, who slotted the ball home in what proved to be a tricky finish due to the tough angle and the quantity of Atlético Madrid defenders who threw their bodies in the way of the shot. 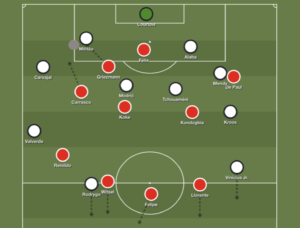 42nd minute. Real Madrid buildup out of their own penalty area. To beat Atlético Madrid’s press, Militão goes long, trying to get Rodrygo in behind the high Atlético Madrid defensive line.

Real Madrid came out for the second half with a much different goal than the first. Their focus now was set on seeing out their two goal lead, which they evidently thought was enough to bury their opponents. They were wholly in control of the match, playing with a very high level of confidence. They had no trouble playing around Atlético Madrid’s press, but they were aided in the lack of necessity to move the ball forward. They could hold the ball in their half for as long as they wanted, catching Atlético Madrid in the limbo between the areas where the hosts are trained to press their opponents with great intensity and the more advanced areas where they sit back and defend in their low block.

When they lost the ball, Real Madrid elected not to try and win the ball back high up the pitch, instead choosing to pack their defensive third and prevent Atlético Madrid from getting the ball anywhere near their penalty area. For much of the second half, it looked like Atlético Madrid were completely out of the game, and they were playing like they knew it.

Of the slew of substitutions Simeone made in the second half, by far the biggest disruptor was Mario Hermoso. Though the center-back did not do anything out of the ordinary in the first ten minutes after he came onto the pitch, he made his presence felt with seven minutes left to go in regulation. Atlético Madrid won their sixth corner kick of the match, and they finally capitalized from a set piece. Thibaut Courtois missed his punch, and the ball bounced off of Hermoso’s shoulder and fell to the back of Real Madrid’s net. Atlético Madrid had a lifeline in the match.

For the final minutes of the match, Atlético Madrid had a renewed intensity, and they threw everything they had at Real Madrid. They pressed Real Madrid regardless of where they were on the pitch, and they put numbers forward in attack. They dominated possession as Real Madrid bunkered in to defend their slim lead.

However, their momentum was thrown off when Hermoso needlessly confronted Dani Carvajal after the latter made a late foul challenge on Reinildo. A fight broke out, Hermoso was given a yellow card, and Atlético Madrid lost a minute of added time to the skirmish. Just a minute later, Hermoso would receive a second yellow card after he (lightly) clipped Dani Ceballos during an Atlético Madrid corner kick. With their man advantage, Real Madrid regained control of the match for the final few minutes, and they saw out their win. 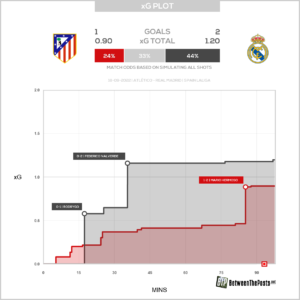 This was the last result Atlético Madrid could have wanted. A win in the derby could have been the result that would have brought them some positivity and momentum after a tough start to the season. Instead, they sit seventh in LaLiga going into the international break.

Things are not all bad for Simeone’s side though. The passion that Atlético Madrid showed at the end of the match was something that they have been missing for quite some time, and Simeone needs to find a way to bring that mentality into every match.

Some could even argue that Atlético Madrid deserved to win this match. They created a number of quality chances early on, and they defended very well for the majority of the match. If Atlético Madrid had scored the opener from one of their set pieces, or had Real Madrid not been so clinical in front of goal, this match would have been drastically different.

There is not much to be said about Real Madrid that has not already been said at this point. Carlo Ancelotti has assembled a team of players who want nothing more than to win, and they seem to come out on top of every match that they play. It was evident that Real Madrid would try to create chances by exploiting Atlético Madrid’s slower defenders, and they did just that. Though they did not create as many chances as one would have guessed, the players showed lethal finishing to capitalize on the few chances that they did produce. 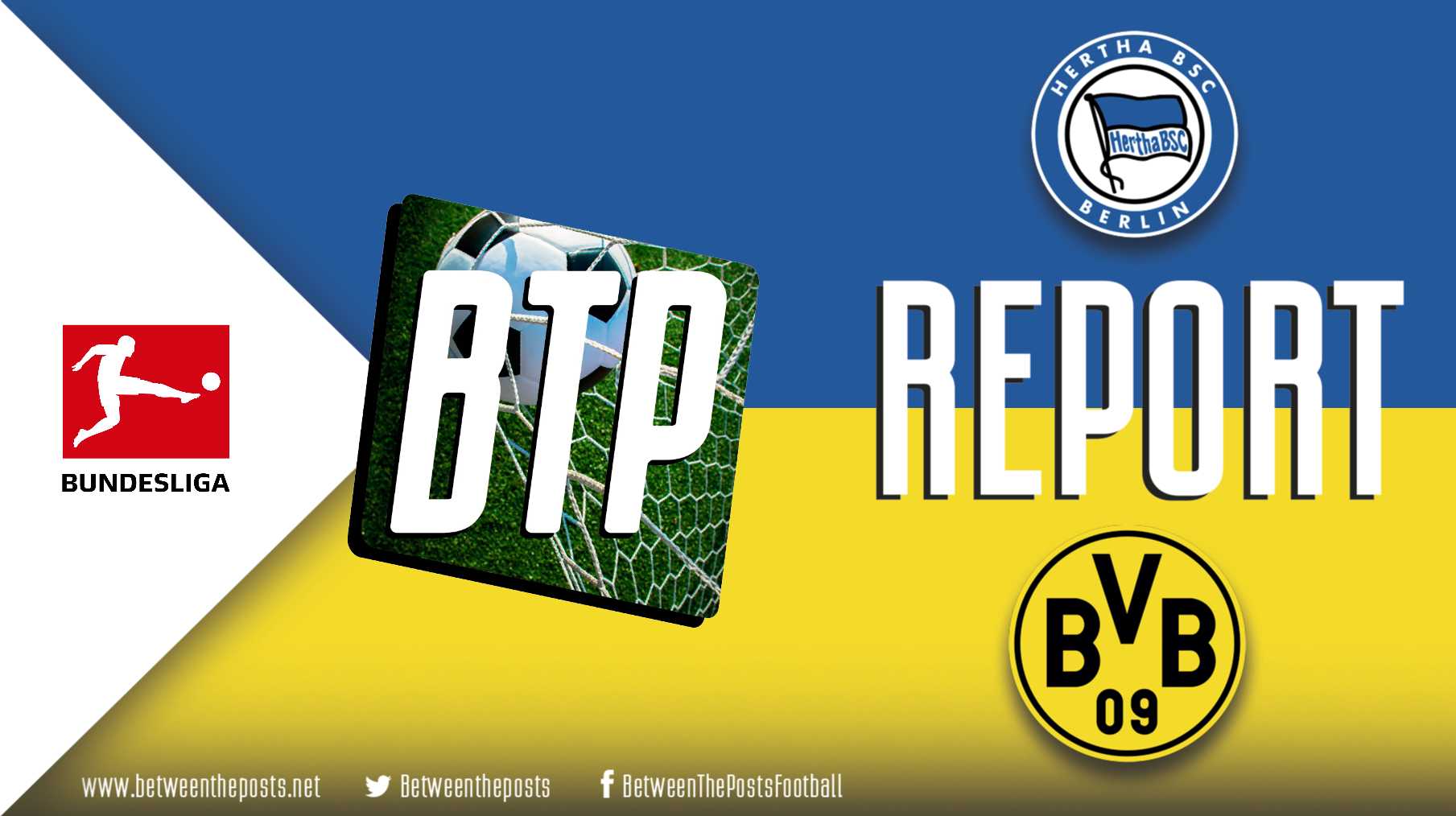