The Bulgarian resistance seemed a worthy match for England’s slower approach, which looked to gradually chip away at them. We might even have had a tighter finish on our hands, irrespective of the result, had it not been for the visitors laying it all out on a plate for the hosts.

This was England’s first international match since defeating Switzerland on penalties in the UEFA Nations League third-place playoff back in June. Since then, this group of players have had time to reflect on another great-yet-ultimately-frustrating campaign that saw them fall short in the semi-finals once again.

Coming back to an easier test – and in a system still designed to facilitate the current crop of players, who mostly reside at top level Premier League clubs – this was the perfect bounce-back fixture to see them on their way.

As was always likely to be the case, Gareth Southgate made a number of changes from the lineups he played in the final games of the Nations League. Still sticking to a 4-3-3 shape, the most notable inclusions came in the form of Kieran Trippier and Michael Keane in defense, and Jordan Henderson and Declan Rice in midfield.

As for England’s opponents, Krasimir Balakov is yet to see his side record a victory so far in Group A of the EURO 2020 qualifiers. After losing their last two matches, including a 3-2 home defeat against Kosovo, the head coach was looking to spring a surprise using six changes to the last eleven. Just the fact that Balakov shifted his side from a 4-4-2 shape into a 5-4-1 formation alone should have been enough to suggest which way they were planning to approach this, their toughest match.

Southgate has done a good job of maintaining a system that does not stray from the successes of the top club sides in the Premier League, where many of his options reside.

So, it was of little surprise when this 4-3-3 layout acted so closely to those of Manchester City, Liverpool and the like. It was always with a keen eye on keeping the positional structure intact. There were multiple cases of central midfielders rotating wide, fullbacks pushing on, and wide forwards coming inside. Even the movement of the far-sided fullbacks to narrow and provide more security against counterattacks, as well as shorter, more stable links across, were another similarity that could be seen here. 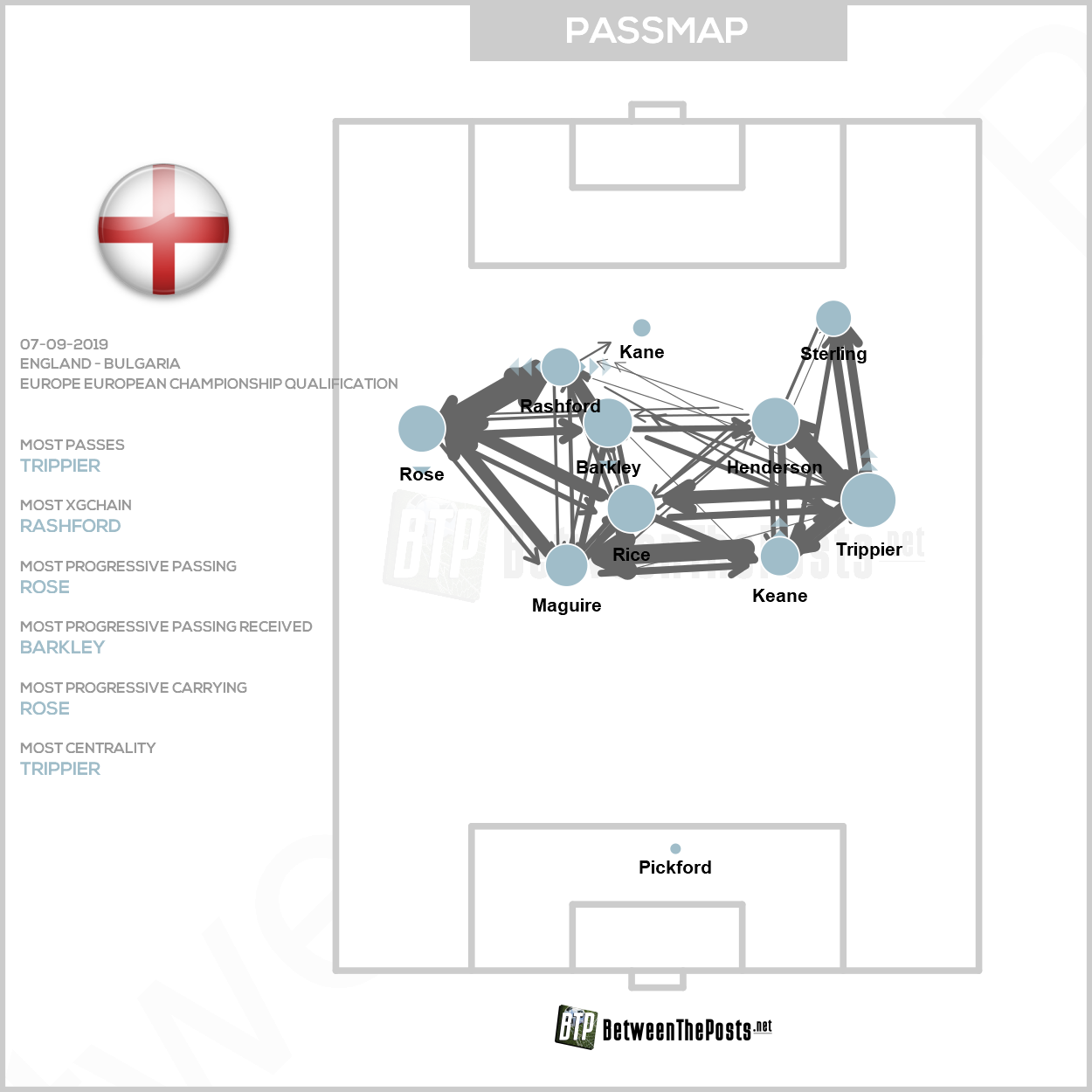 The first attacking pattern on show was through Ross Barkley dropping deep on the left before attempting sweeping diagonals over the top for the far-sided runs of Trippier and Raheem Sterling. These were persistent despite their lack of success. This also highlighted an issue early on, that Bulgaria were affording England players too much room just in front of their midfield, thus allowing easy shifts across and time to pick out passes from central positions.

Bulgaria’s 5-4-1 display was particularly man-orientated but impressively so. Their reaction speeds were razor sharp and did not give the home side’s players a moment to breathe. Against England’s right side in particular, this was especially strong at nullifying the players on that side who constantly dropped to the ball, resulting in simple return passes.

That being said, there is a case to be made that those simple exchanges – drawing out their opposite numbers – were a ploy to simply make them work as part of a broader plan. Otherwise, you would imagine those England players would at least have attempted to open their body upon receival.

This, conceivably, could even have been a ploy to stretch the opposite flank a little more. After the away side’s wide midfielders began to drop deeper to stem the flow of switches – thus creating a back-six, or sometimes even a back-seven(!) – they needed to ensure their side-to-side play was having a greater impact.

So, by keeping their opponents working and thus relieving more space down the left, England’s rotations down that side quickly became more threatening. Specifically, the vertical interchanges between Danny Rose and Marcus Rashford were the most incisive. That kind of shift in positions was rarely seen down the right, but its effectiveness was undeniable as Rose found himself in behind his man and into positions to cut it back from on a solid handful of occasions. 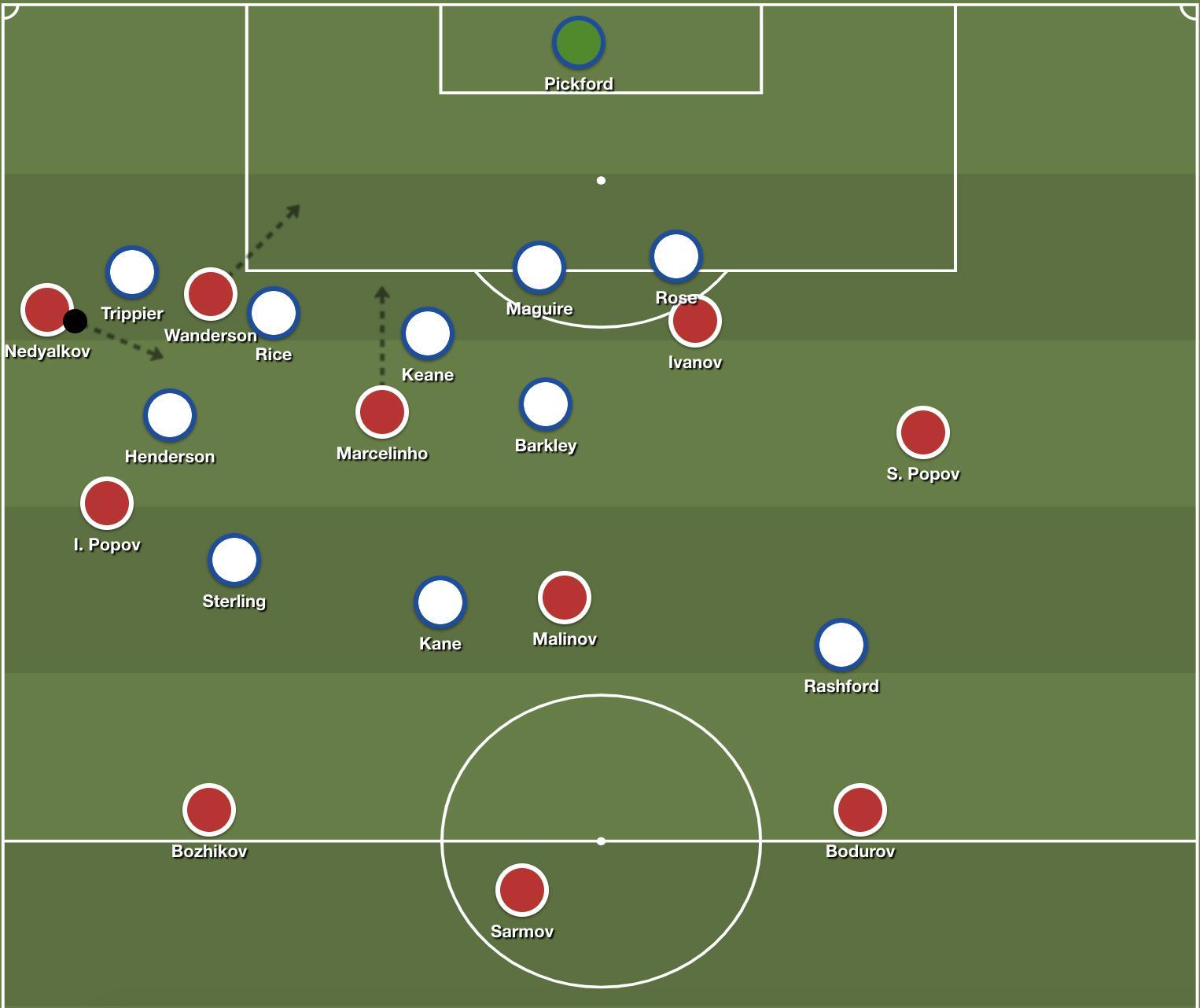 One instance of Rose and Rashford’s vertical interchange finding a way to get the former in down the channel.

Away from that, England were not posing too many other questions. The problem with their right-sided play overall was that it was very two-dimensional, even when they were intentionally attacking that side of the pitch. Down the left, there was full commitment from the three on that side; down the right, it was all in pairs, with no third man runners A passing combination between two players, while a third player simultaneously makes a run, usually in behind the opponent’s defensive line. After the initial combination, the ball is quickly played in depth for the third player to run onto. to make the difference. The one threat that was put to use on a couple of occasions was Sterling’s one-versus-one ability. By having Henderson, or the nearby inside player, drop close, the Bulgarian backline could be manipulated, allowing the winger to break into the space now left behind by his own accord.

Still, though, neither of these strategies were exactly paying dividends, not that England seemed too bothered by this. They were happy to persist and ebb away at Bulgaria slowly but surely, and yet it did not even take that for them to breakthrough. Instead, it was down to some very naive buildup play by Balakov’s side. 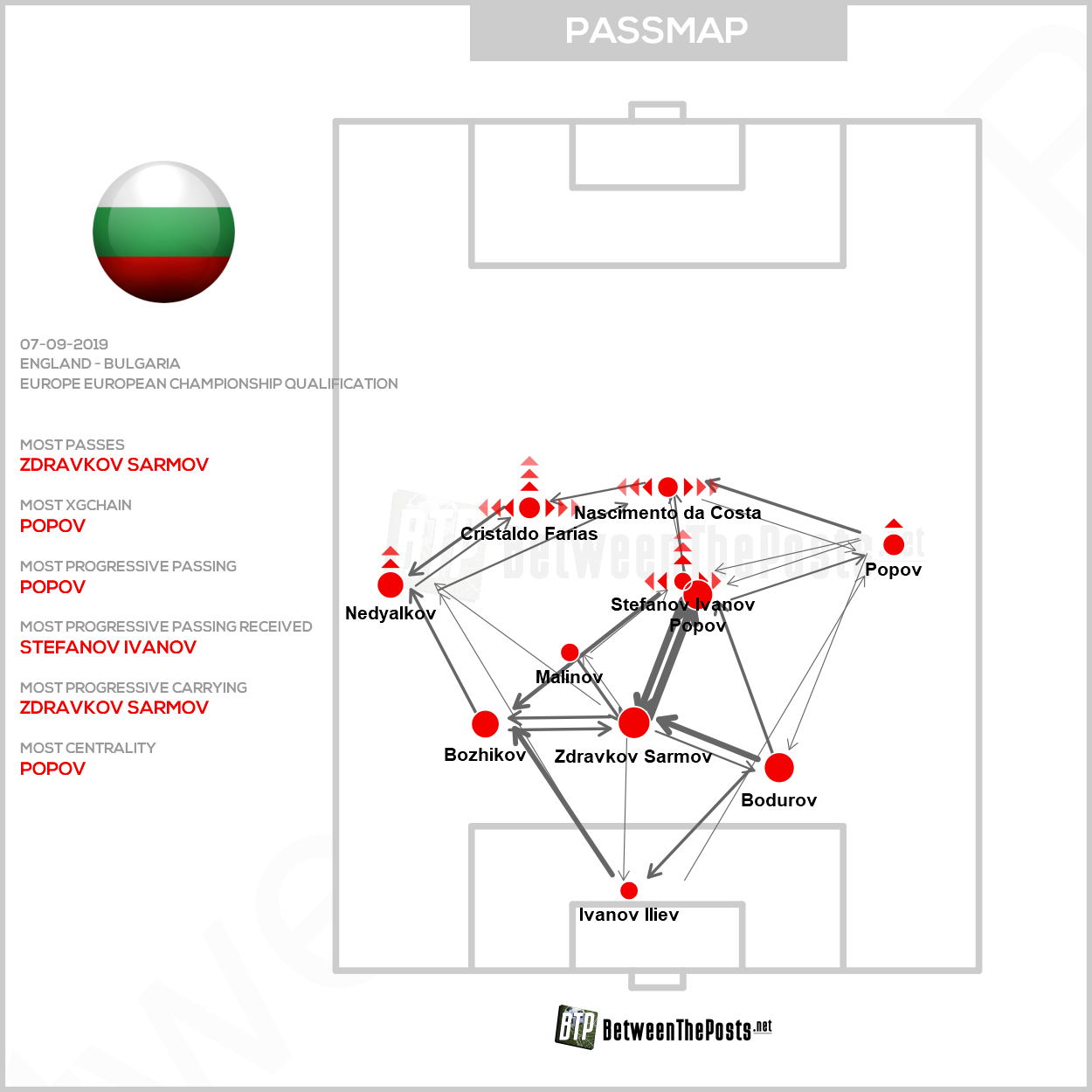 In general, Bulgaria’s buildup attempts in bringing the central midfielders close before drilling it into the left-wide-forward to lay it off and switch it to the right, had proven fairly threatening despite such a small sample size. This level of buildup, so deep in their own third, proved to be a little too much, though.

As a square ball from a goal kick came back the way of Plamen Iliev, who then rushed his pass out wide and short to Vasil Bozhikov. Had he taken a touch, he could have played it longer or fed it into the more open players surrounding him, but because he did not, and because Sterling had already anticipated this pass – evident in the timing of his press – he was able to pounce on the loose ball. After rounding Bozhikov, he then neatly cut it back for Harry Kane to finish.

Early into the second half it so nearly paid off for them. Just a few minutes in, Marcelinho drifted off the back of the England defense completely untracked to receive inside from the flank. With a first-time chip, he was able to play in Wanderson’s third-man run off the back of Rice. At a slightly narrow angle, the wide attacker lined up a shot in off the left which was denied by Jordan Pickford. 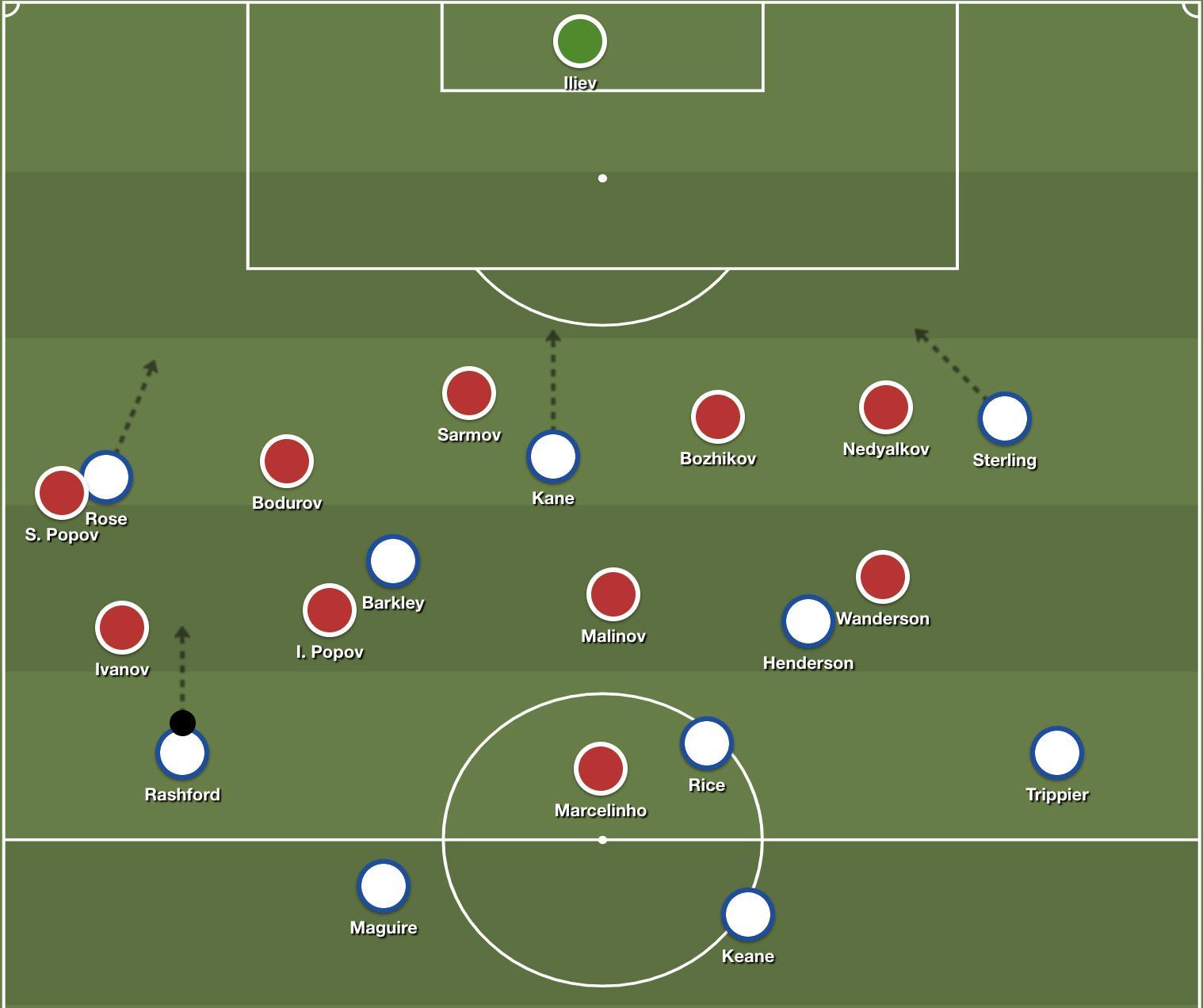 They were not in the ascendency for too long, though, before Marcus Rashford perfectly exploited the space that was being afforded to England by nature of the current game state. In a surging run just a couple of minutes on, the attacker beat everyone for pace before cutting back in and being swept from under his feet to win a penalty, which was, of course, converted by Kane.

It now appeared to be something of a damage limitation job for Bulgaria, and they were doing a good job of it. Their main problem was getting out to close down England’s deeper receivers.

With the wide midfielders being sucked deeper and deeper, the players in England’s fullback positions were free to receive on either side. To the same extent, the hosts were able to shift it across the midfield with no trouble at all. Thus, Southgate’s side controlled play at a canter despite still being pressed impeccably when they played into more dangerous areas in the away side’s block. And, even when England gave up possession as a result of that, they had men over to counterpress After losing possession, a team immediately moves towards the ball as a unit to regain possession, or at least slow down the pace of the counterattack. effectively.

Unfortunately, and unsurprisingly, for Bulgaria, the remaining two England goals to round it off were both from similar situations to the ones that had preceded them. In the fifty-fifth minute, a sloppy, short, vertical pass in buildup was all too predictable and was barely reaching its man as Kane stepped across to intervene. Quick off the blocks was Rashford, again, surging forwards and laying it wide to Kane, who drilled it across for Sterling to tap in.

It was not for another twenty minutes of relative nothingness until Kane bagged his hat-trick. This one also stemming from the growing space in transition, as Kane drove box-wards before cutting in and being unfairly challenged from behind. Another spot kick, another goal. So easy, yet also not so easy. To Bulgaria’s credit, even for the final twenty minutes, they rarely conceded space when they were still defending in their own third. Their intensity levels were admirable. 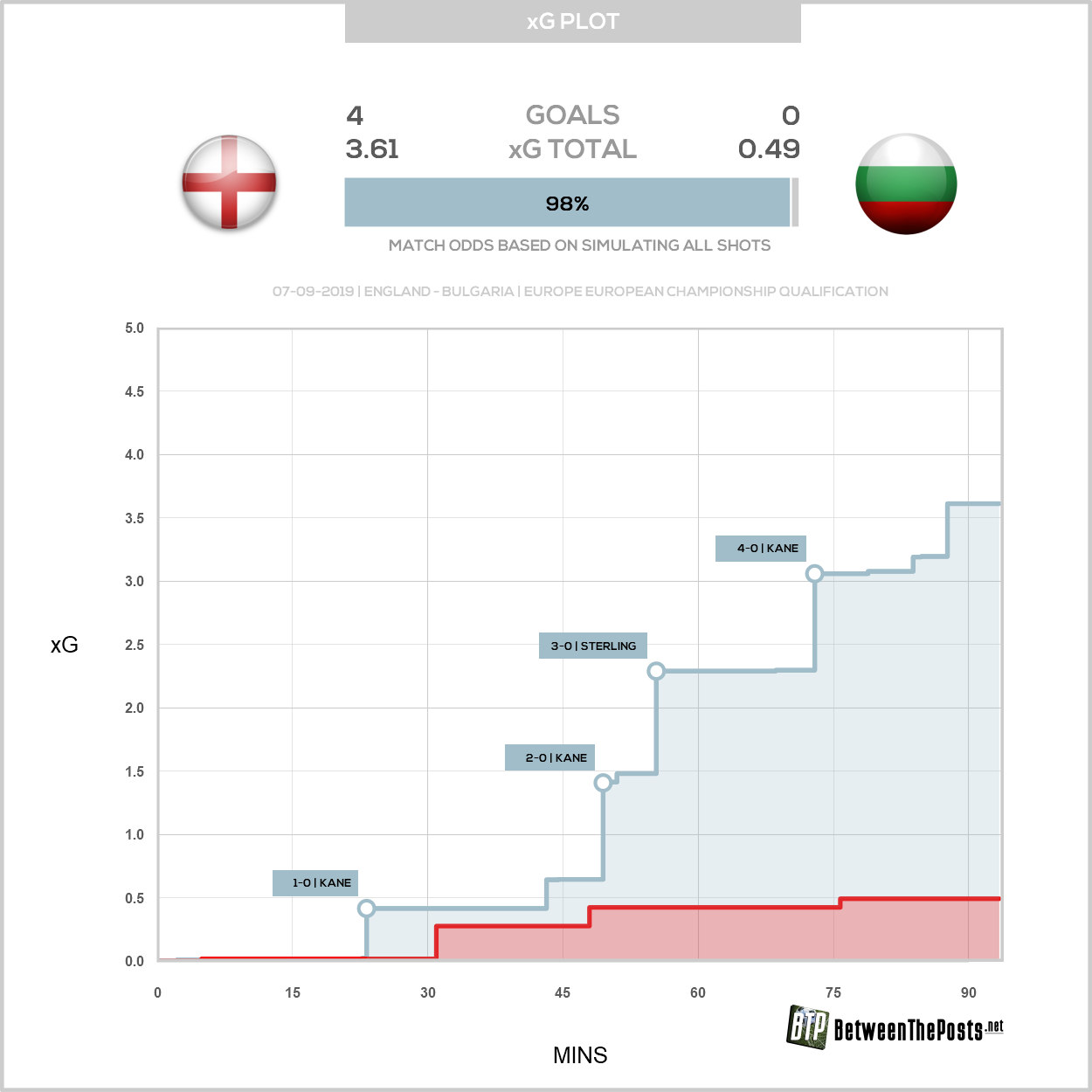 This is now three-in-three for England, scoring fourteen and conceding just one. They already look well on their way to topping Group A, with second-placed Kosovo up next on Tuesday.

With a game over everyone else and level bottom on points, the fate of Bulgaria appears to be quite contrasting. Can they make up the current six-point deficit between them and second? Most likely not.

Use the arrows to scroll though all available match plots. Click to enlarge.