England started the game with purpose, but went behind to Mikkel Damsgaard’s free-kick as Denmark grew slowly into the game. England soon equalized though, and as the game went on they reclaimed dominance as Denmark faded into a more passive stance. England eventually claimed a deserved win, albeit with a slightly fortunate penalty.

England arrived into this semi-final match on the back of a fairly easy win over Ukraine. England lined up once again in a 4-2-3-1 shape to face Denmark, with a back four of Kyle Walker, John Stones, Harry Maguire and Luke Shaw protected by a double pivot Two central midfielders next to each other. of Kalvin Phillips and Declan Rice. Bukayo Saka returned to the side in place of Jadon Sancho, joining Mason Mount, Raheem Sterling and Harry Kane in the attack.

Denmark meanwhile followed a dominant win over Wales with victory over Czech Republic to reach this stage. Their lineup was unchanged from last time out, starting in a 3-4-3 system with Andreas Christensen, Simon Kjær and Jannik Vestergaard as center-backs, flanked by Jens Stryger Larsen and Joakim Mæhle. Pierre-Emile Højbjerg and Thomas Delaney were the central midfielders behind a front trio of Martin Braithwaite, Kasper Dolberg and Mikkel Damsgaard.

Similar to their opening game of the tournament against Croatia, the first half of this game saw a very high energy start to the match from England, playing at an intensity probably not sustainable for long spells of a game.

England tried to press Denmark’s buildup high from the start. They often shifted into a 4-3-3 shape when pressing, where Phillips would push forward onto Denmark’s central midfield alongside Mount, while Rice remained deeper.

England had their front three pressing against Denmark’s three center-backs, and Denmark generally tried to escape this through their wing-backs, since England were playing with a back four and often could not push their fullbacks up too early during pressing due to the presence of Braithwaite and Damsgaard in the channels.

On one occasion early on, Denmark were able to exploit the space behind England’s pressing shapes with a quick vertical combination on the right, setting Damsgaard free in behind, however Walker’s recovery speed was able to salvage the situation for England.

Nice aerial shot of the huge gap in England’s defense after both Stones and Maguire were pulled out.

Walker made up for it with his pace this time; interesting to keep an eye on. #ENG – #DEN. pic.twitter.com/sh4M5DrSJD

Denmark grow into the game

The first fifteen minutes had mostly seen Denmark on the back foot due to England’s positive start. However, Denmark started to grow into the game after this point, and were able to calm the game down a bit with some longer possession spells of their own.

They were generally quite stable with the ball, having the back three plus Højbjerg dropping deep to help circulation, and the wing-backs to use as outlets. Delaney often stayed a little bit higher than Højbjerg, staying in line with England’s midfield. As they have already shown in the tournament, Denmark shine when they are able to play quite a vertical game, getting the ball into the feet of their front players to combine, and they showed this on a couple of occasions here.

England still had the majority of possession in the first half though, and there was a bit of weakness in the Denmark defensive approach. Primarily, the coverage of the halfspaces If you divide the field in five vertical lanes, the halfspaces are the lanes that are not on the wing and not in the center. Because there is no touchline like on the wing, players have the freedom to go everywhere. But this zone often is not as well-defended as the very center. This makes it a very valuable offensive zone to play in and a lot of chances are created by passes or dribbles from the halfspace. from the midfield four was somewhat weak, and England were able to thread passes through the midfield on a few occasions. 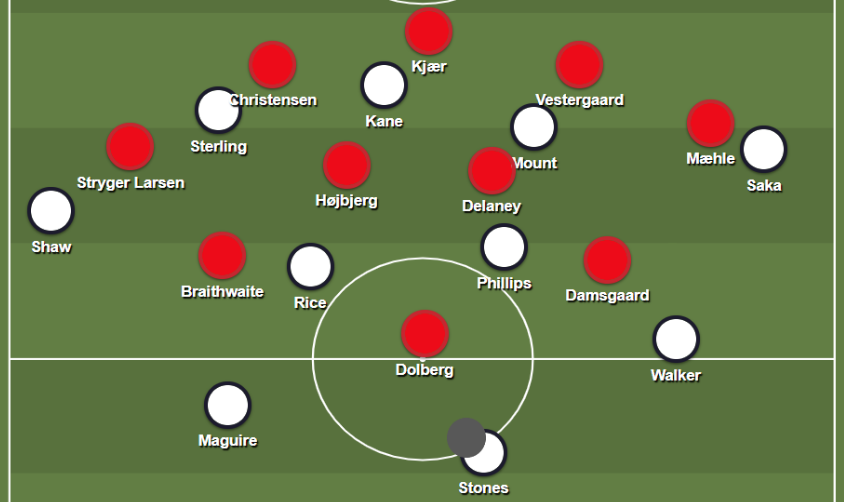 England often played with Walker deeper and Shaw higher when they had the ball. Phillips started in a double pivot but had the freedom to push higher up in attack also.

England’s occupation of the space between lines was quite flexible, with Mount able to be joined by Kane dropping in, or by the pushing up of Phillips from midfield, or the indenting of Sterling from the left when Shaw overlapped. When a wide player, most of the times a wing-back, runs outside to fill in the space left by a winger going inside with or without the ball, this is called overlapping.

Denmark were often able to extinguish these situations thanks to their center-backs quickly stepping forward to deal with the danger, but there were some occasions in the first half where England were able to expose the backline and find passes in behind. Such a situation was what led to England’s goal in the first half, as Kane was able to receive between the lines to play Saka in.

Prior to England’s goal in the first half, Damsgaard had put Denmark ahead after half an hour with an impressive free-kick, helped by a smart Denmark wall which obscured Pickford’s view of the ball as it was struck.

Denmark were the first team to make changes with twenty-five minutes to go, with Daniel Wass, Christian Nørgaard and Yussuf Poulsen replacing Stryger Larsen, Dolberg and Damsgaard respectively. This saw Denmark switch to a 3-5-2 system, with Nørgaard joining Højbjerg and Delaney in midfield, while Poulsen played up front with Braithwaite. The change in Denmark’s formation also saw England now defending more in a 4-2-3-1 shape, with Mount as the number ten against the deep-lying Nørgaard, while Phillips and Rice covered the deeper midfield zones.

England found themselves able to easily dominate the ball against a team defending in a 5-3-2 shape already against Germany and Ukraine in this tournament, and this game was no different after Denmark’s system change, which forced them to play even more passive and gave England more control due to the amount of space to the sides of the Denmark midfield and attacking units.

England themselves only made one change in the second half, bringing on Jack Grealish for Saka and moving Sterling over to the right. Denmark were able to hold on for a draw at the end of the ninety minutes without doing much in the second half after changing formations, weathering a late attacking storm from England.

England made two changes early in extra-time bringing on Jordan Henderson and Phil Foden for Rice and Mount. The game continued in very much the same pattern with England dominating against a deep defense from Denmark. It was just a matter of whether England’s individuals could find the winning move in tight situations.

Sterling was consistently dangerous up against Mæhle since moving to the right, and eventually won England a slightly questionable penalty, which Kane converted on the rebound to put England ahead just before the break in extra-time.

The change in game state saw Denmark go to a 4-3-3 shape, with Jonas Wind replacing Vestergaard to play up front. England meanwhile switched to a back five, with Kieran Trippier replacing the earlier substitute Grealish.

England defended against the renewed Danish attack in a 5-4-1 deep block, in which they did well to shift across the pitch whenever the ball went wide to prevent crosses into the box. Denmark’s attack then was reliant on vertical passes into feet, and attempts to combine from here were crowded out by England’s compactness. England also managed the game well in their possession phases late on, moving the ball in a composed manner against a tiring Danish side.

Denmark took one shot between minute 60 and 120.

England started with great intensity, before falling off slightly and letting Denmark go ahead in the first half. The equalizer was swift though, and England became increasingly dominant in the game as it went on, controlling possession well against an increasingly passive Denmark. The penalty that brought them the eventual winner was slightly lucky, but England were the better side overall and deserved the win.

Denmark showed flashes of what makes them a good team with their combination play in the first half, but faded badly as the game progressed into its later stages. The switch to a 3-5-2 shape made them way too passive against the ball and handed more game control to England, which eventually paid off. 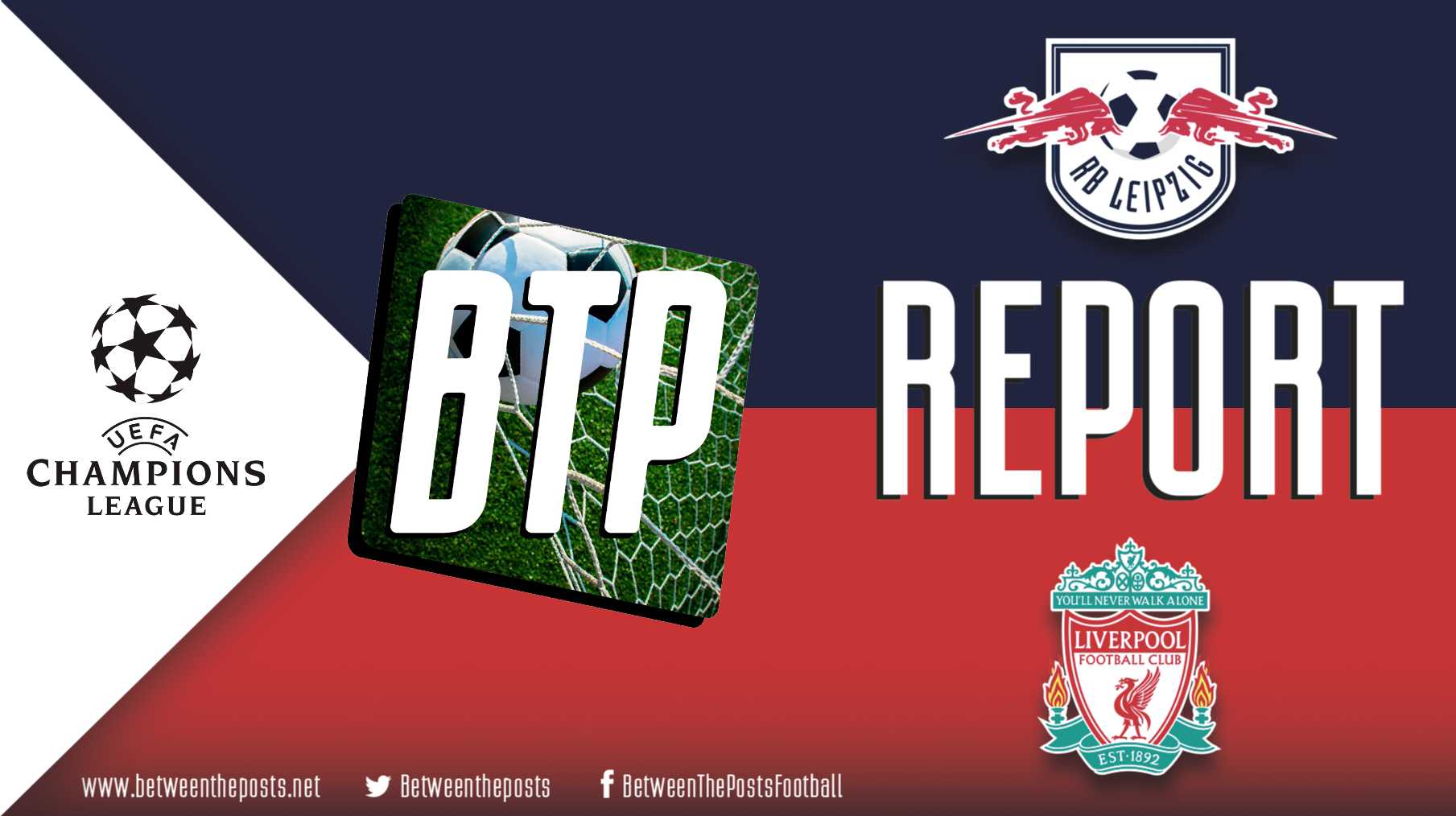 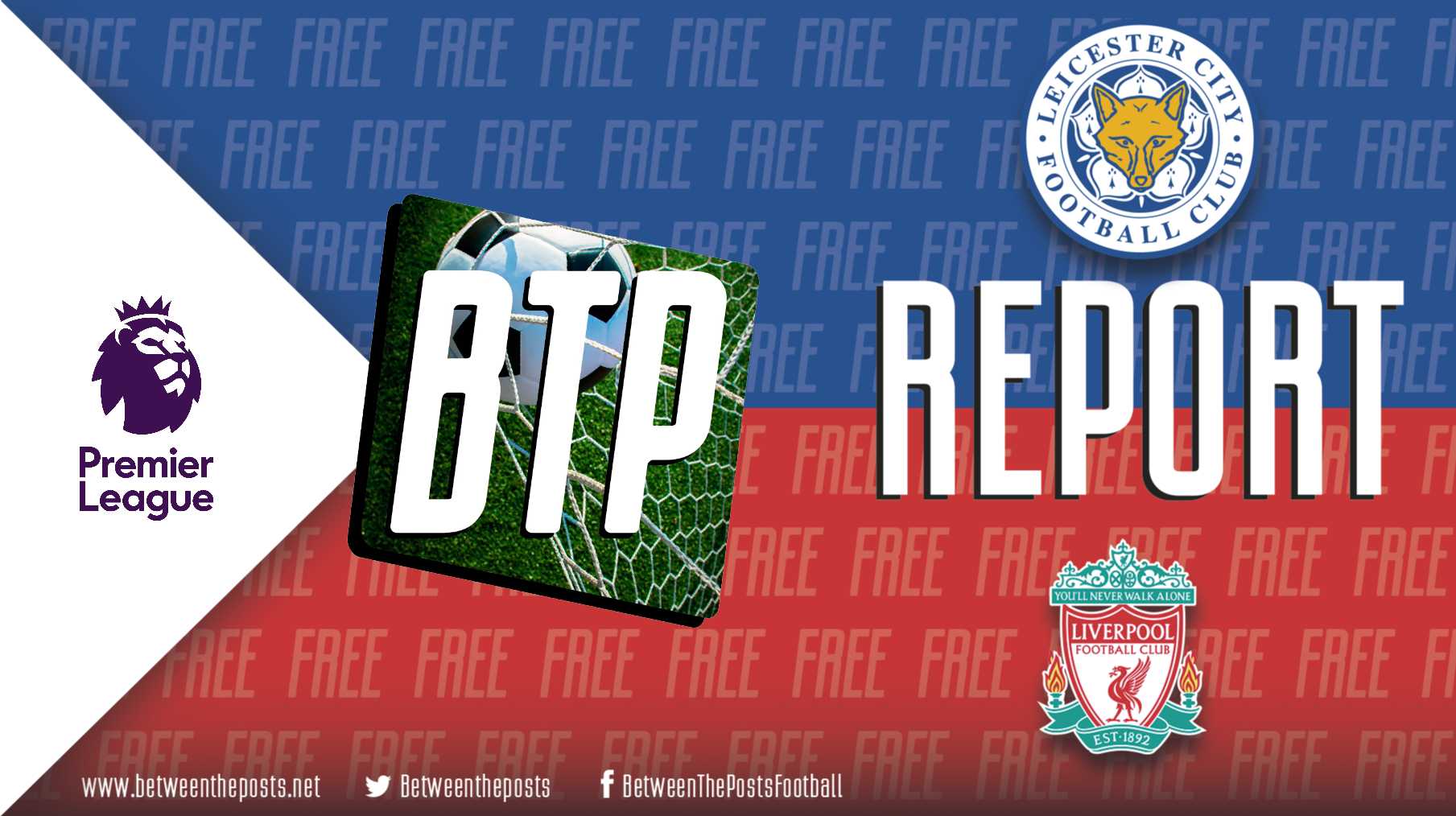