After three years, Everton finally recorded a Premier League victory over Chelsea. The visitors continued their inconsistent form and incurred another dent in their Champions League hopes. After the visitor’s dominance in the first half, Everton forced themselves back into the game, kept compact, well organised and created much better chances to take the victory at Goodison Park.

Both managers started their teams in their usual formations, which you could argue have not fully worked for either of them this season. Marco Silva started Everton in their 4-2-3-1 formation, making just two changes from last week’s 3-2 defeat to Newcastle United. Séamus Coleman returned to right back, replacing Jonjoe Kenny, whilst Yerry Mina started at center-back over the suspended Kurt Zouma.

Maurizio Sarri once again started Chelsea in a 4-3-3 formation, making seven changes from Thursday night’s 5-0 win over Dynamo Kyiv in the Europa League. Cesar Azpilicueta and David Luiz where in for Davide Zappacosta and Andreas Christensen at the back. Jorginho and former Everton midfielder Ross Barkley returned to the starting lineup, replacing Ruben Loftus-Cheek and Mateo Kovačić. Sarri completely changed his front three as Willian, Olivier Giroud and Callum Hudson-Odoi were replaced by Eden Hazard, Gonzalo Higuaín and Pedro. 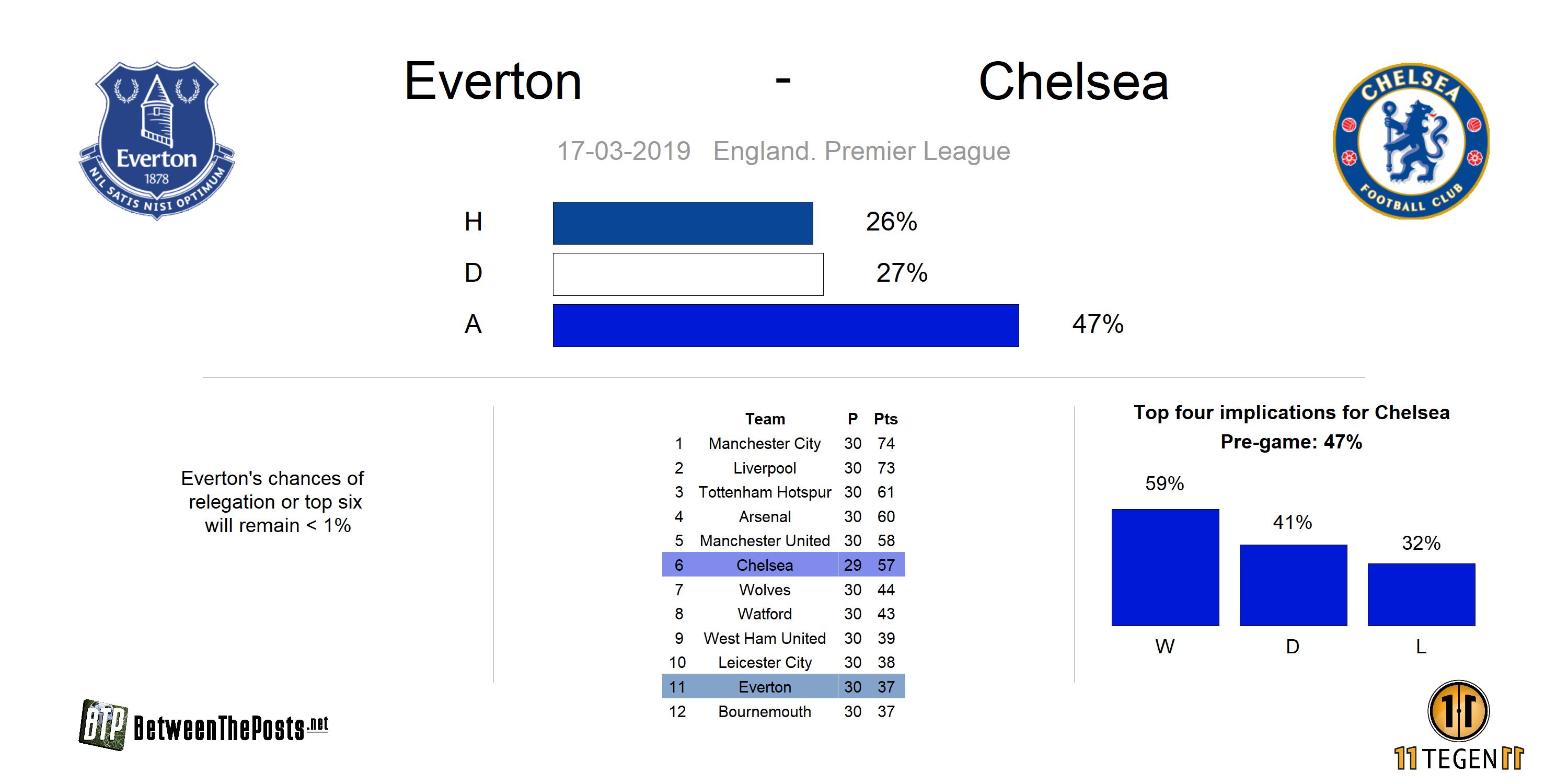 Match prediction, standings and implication going into the weekend.

Sarri’s team started with total dominance and looked more than comfortable in possession. As usual, Everton transitioned into a low-block A low block refers to a team that retreats deep in their own half out of possession, generally only disrupting their opponents around their own box. 4-4-2 shape when coming up against ball-orientated teams, with Gylfi Sigurdsson pushing up next to Dominic Calvert-Lewin when they were not on the ball. Everton were not pressing anywhere near the levels that we saw against Liverpool, instead, holding their shape and looking to force Chelsea players out wide.

However, Everton were not compact enough and left a lot of space between the lines for Chelsea to expose. Eden Hazard and Pedro used this to their advantage, dropping in and out of the halfspace as well as roaming just outside of the penalty area. Between the two, they had four shots and completed 27 passes in the final third, The one-third of the pitch that is closest to the opposition’s goal. putting a lot of pressure on Everton’s defense.

Chelsea also managed to progress the ball a lot on both wings, using vertical passes to break through Everton’s 4-4-2 shape. They targeted the space between the center-back and full-back on both channels, making numerous runs and creating three-versus-two overloads on the wing. Ross Barkley and N’Golo Kanté received possession in a number of good areas, however, neither men were able to feed Higuaín in the penalty area and opportunities faded away. 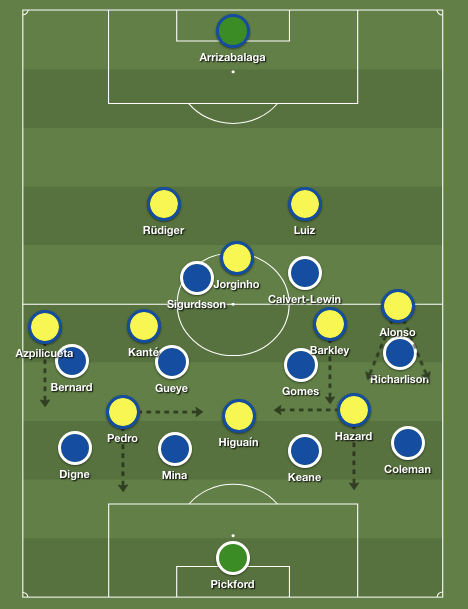 Everton’s general shape off the ball and the runs Chelsea players would make, which helped them get through Everton’s 4-4-2 formation.

Sigurdsson was given the task of man-marking Jorginho, which worked to some extent, but other than that, Chelsea players were allowed to move and make plenty of forward runs. Chelsea somehow did not score. Hazard’s deflected shot hit the post, Higuaín was met by Jorginho but Yerry Mina made an brilliant block to deny him and Pedro’s effort from range went narrowly wide after skipping past four Everton players.

Chelsea pressing enables them to win possession back quickly

In the few moments Everton had the ball in the first half, they would often find themselves being closed down quickly and being forced to smash the ball up the pitch to relieve pressure. Chelsea would move into a 4-1-4-1 shape off the ball, with Barkley or Kanté moving out of the midfield line to press the center-backs and close down passing lanes.

Everton managed to move and keep possession as Chelsea moved up in numbers, but they failed to transition the ball from the middle towards the penalty area. Everton completed just fourteen passes in the final third throughout the first half, both Sigurdsson and Calvert-Lewin having nowhere near enough of the ball to cause a threat.

Despite not winning the ball high up the pitch, Chelsea’s pressing was very effective, and they were able to go back into their possession game quickly. They asserted dominance, comfortably controlling the midfield with David Luiz and Antonio Rüdiger making numerous amounts of successful long passes, however, Everton were not pulled out of their shape and defended well after a bad opening fifteen minutes. 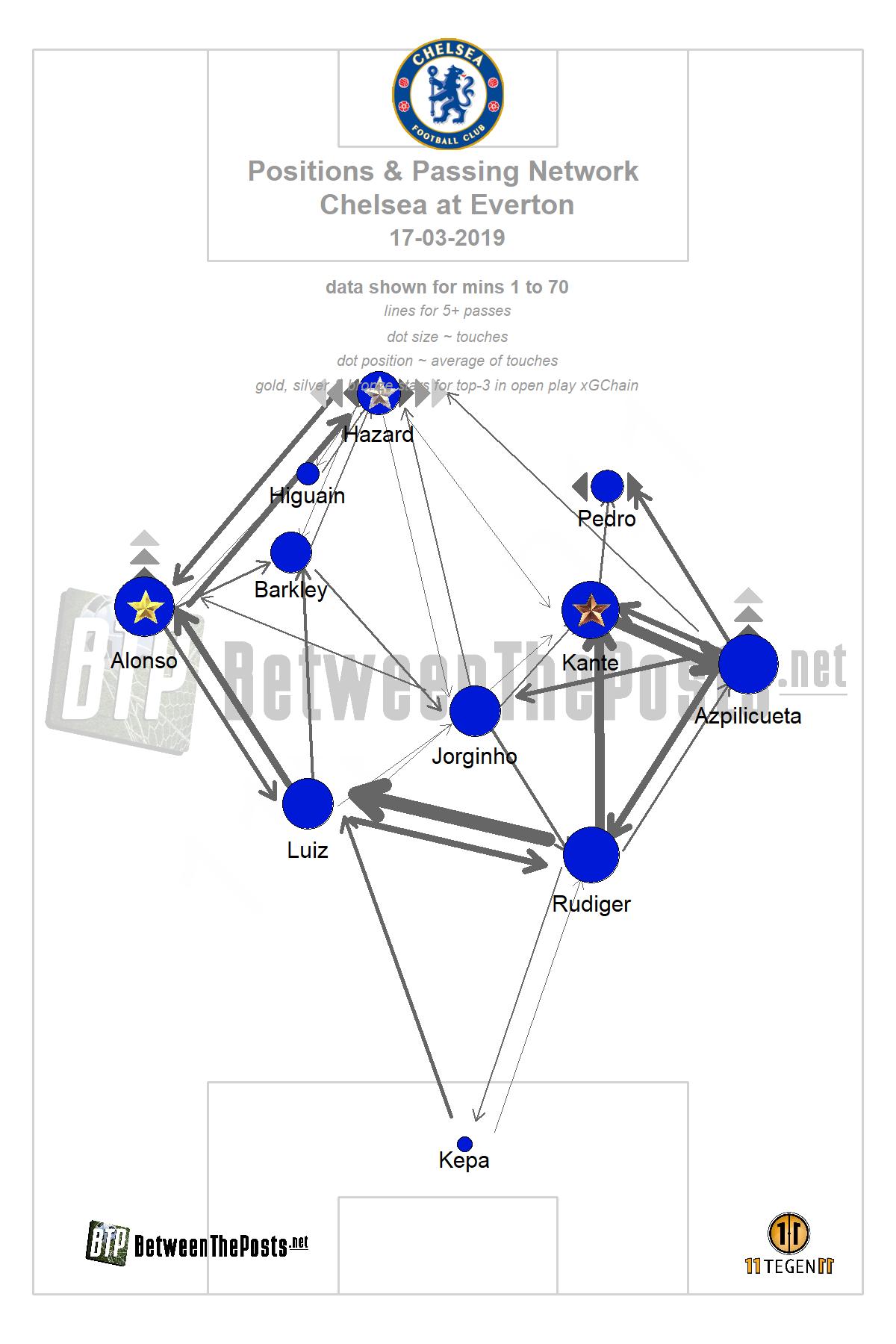 Once more, a man-marked Jorginho failed to deliver his expected share of ball-progression.

Marco Silva’s team talk certainly worked wonders as Everton began the second half a lot better. Not only did they keep the ball, but they were able to go forward and move up the pitch. Everton targeted the right flank, allowing Richarlison to drop into the halfspace which caused Marcos Alonso a lot of problems.

Everton’s biggest threat – and their opening goal – would be from corners. Just 0.40 of Everton’s total of 2.49 expected goals in this match came from open play. Calvert-Lewin’s header was saved by Kepa Arrizabalaga, only to fall into the path of Richarlison who guided the ball into the back of the net. From there, Everton looked much more organised and started to create good opportunities of their own. Chelsea would make a double substitution to try and get back into the game. Barkley and Higuain were taken off for Ruben Loftus-Cheek and Olivier Giroud.

Chelsea failed to break into the final third as effectively as they did in the first half, often taking shots from distance instead of working it into the penalty area. A lot of credit is due to Everton’s two-banks-of-four, who were much more compact and gave both Hazard and Pedro very little access to the ball in comparison to the first half – Hazard dropping further away from goal as a result. Everton would go more defensive, but Silva still wanted to keep his 4-4-2 shape, taking off Andre Gomes for Morgan Schneiderlin, as well as dropping his team further back into their own half.

Everton would extend their lead further after Gylfi Sigurdsson turned in the rebound from his own missed penalty. Sarri’s last roll of the dice would see Jorginho go off for Callum Hudson-Odoi, changing Chelsea’s formation from a 4-3-3 into a 4-2-4, with Hazard dropping next to Giroud. Hudson-Odoi made the best impact out of Sarri’s substitutions, carrying the ball from deep a number of times as well as forcing Pickford into a good save.

Silva’s team almost had the opportunity to make it 3-0, Sigurdsson’s excellent pass behind Chelsea’s defensive line was met by substitute Theo Walcott, but his shot was saved by Arrizabalaga. 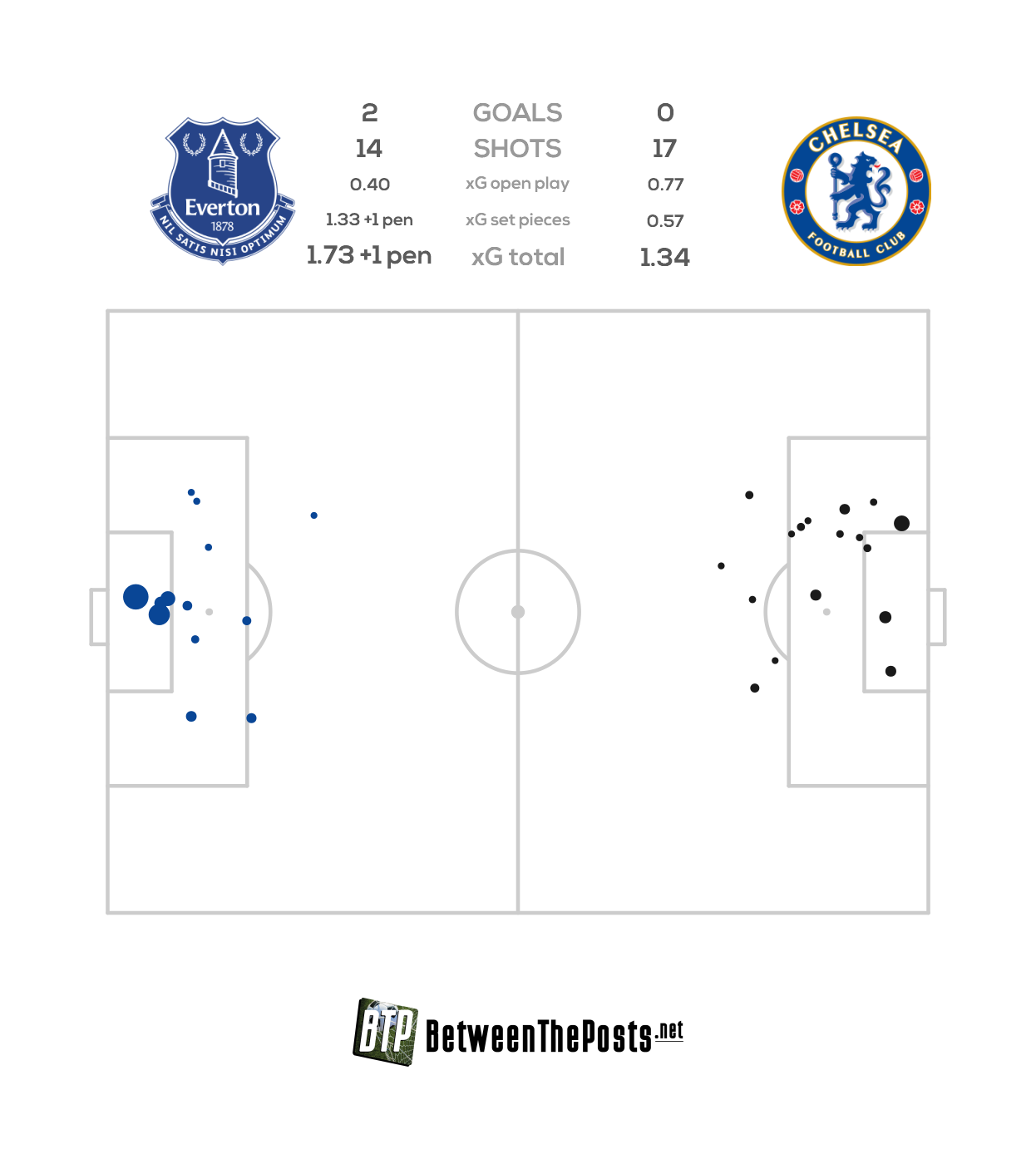 This match certainly meets the cliché “a tale of two halves”. Chelsea were comfortably playing through Everton using plenty of vertical passes, and Hazard and Pedro exploited space close towards goal and created good chances in the first half. In the second, Everton were easily the team on top and could have scored more than what they did. Not only was their passing more efficient but we could see their attack working off each other, something we have not seen much of under Marco Silva. This would be a big confidence boost for Silva and the rest of the Everton squad, with a tough trip to West Ham and a visit to fourth-placed Arsenal coming up.

Chelsea’s performance just adds to the stale run of form they are going through. Sarri’s team are too many points in front to drop below sixth and an away trip to Cardiff after the international break should see them go back to winning ways. However, with away trips to Liverpool and Manchester United inbound, Chelsea’s season can easily finish with a sour taste after a sweet start to their Premier League campaign. 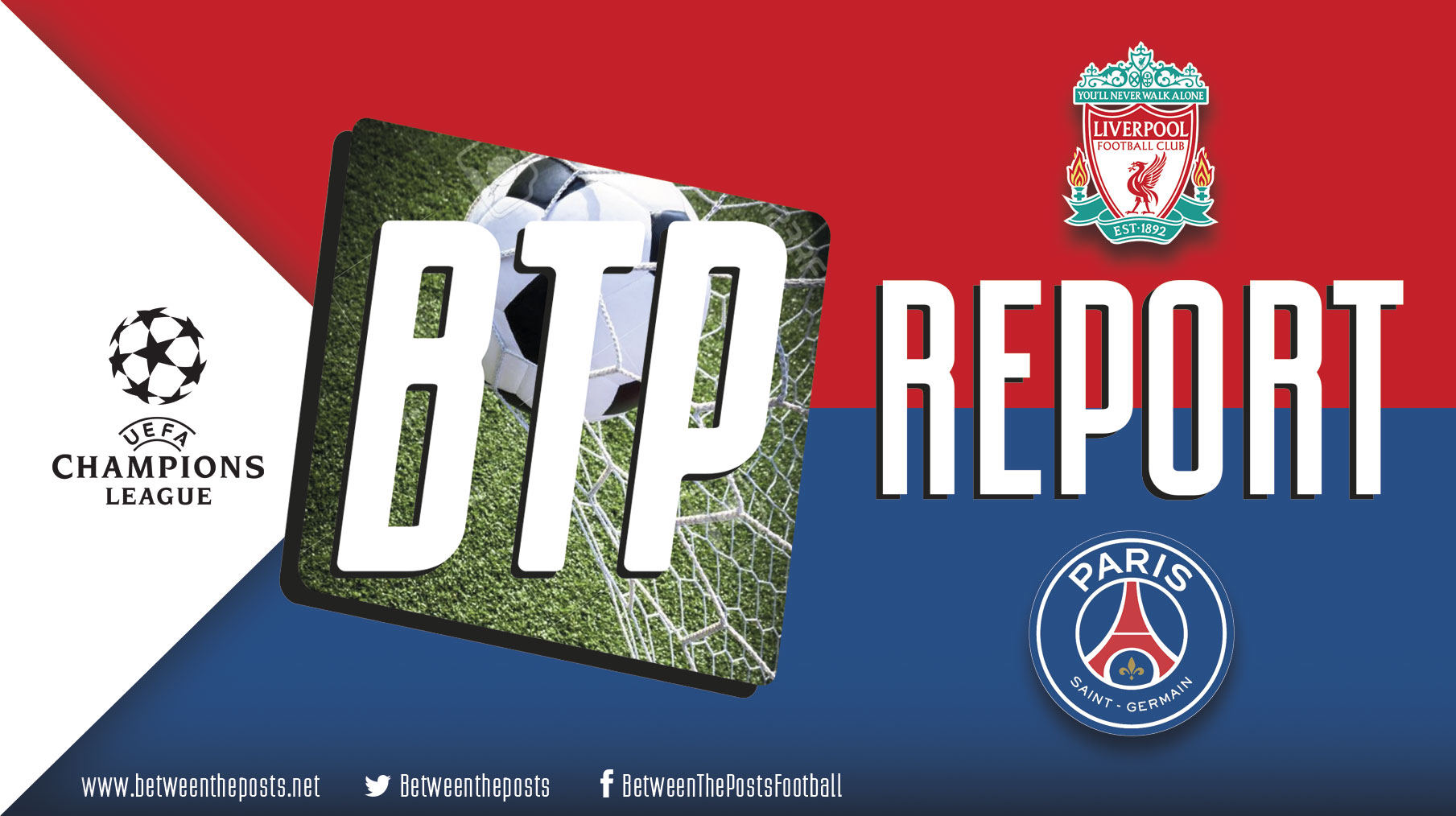