In a scrappy, tight and intense affair, Duncan Ferguson’s first game as interim Everton boss could not have started better. Chelsea controlled the ball, but an aggressive low block and fast transitions in attack was enough to see the hosts gain an important three points.

Everton have just completed another circle in the Farhad Moshiri-era. New manager comes in, millions thrown at poorly recruited players, inflated expectations, poor results, repeat. First it was Ronald Koeman, now Marco Silva would be the next to face the sack.

Eighteenth placed in the Premier League table, four wins in fifteen games, three defeats on the spin – even in the face of decent underlying numbers, these results are not good enough. It is now time for Duncan Ferguson, cult hero and former mad-man, to turn the tide – for the short term at least. He made two changes, Morgan Schneiderlin and Theo Walcott starting for Yerry Mina and Tom Davies.

Chelsea had made their managerial change in the summer, in the form of Frank Lampard. Defeats to Manchester City and West Ham United may have rocked the boat, but Chelsea still have a firm grip in the fourth-placed position.

Lampard has often rotated between 4-3-3 / 4-2-3-1 formations, finding a way to encourage young players coming through, while keeping more senior players happy. He would choose the latter, making no changes in his starting line-up from the team that beat Aston Villa, despite Willian and Tammy Abraham being doubts.

Back to basics for Everton

In the past few fixtures, Everton’s 3-4-3 shape was off balanced and picked apart comfortably – a change was long overdue. Ferguson’s 4-4-2 formation was similar to the structure seen last season at Goodison Park, Richarlison capable of dropping deep if needed, while defensive and midfield lines were close to stop play in this area.

Although the high block A high block refers to a team that regularly leaves their own half out of possession, to disrupt their opponents far into the attacking half. on the opposition center-backs was not there, Everton’s compactness and high intensity certainly were. Ferguson’s team were much more comfortable and suited out of possession, the midfield line was disciplined when pressing – without drastically pushing forward, which could leave their midfield partner isolated.

Chelsea dominated the ball from the start, having the numerical advantage in the middle of the field, with Mason Mount often roaming back, while N’Golo Kanté could push further forward. However, Everton’s defensive and midfield lines remained close, which enabled them to make plenty of turnovers in the middle third and stop Chelsea from creating chances.

Once Everton had possession, they would aim to build a fast transition forward while the opposition were out of shape. This gave them the greatest of starts, Richarlison playing the ball out wide towards Djibril Sidibé, before the right back’s in swinging cross was headed home by the Brazilian forward – a combination which has worked very well in recent times. 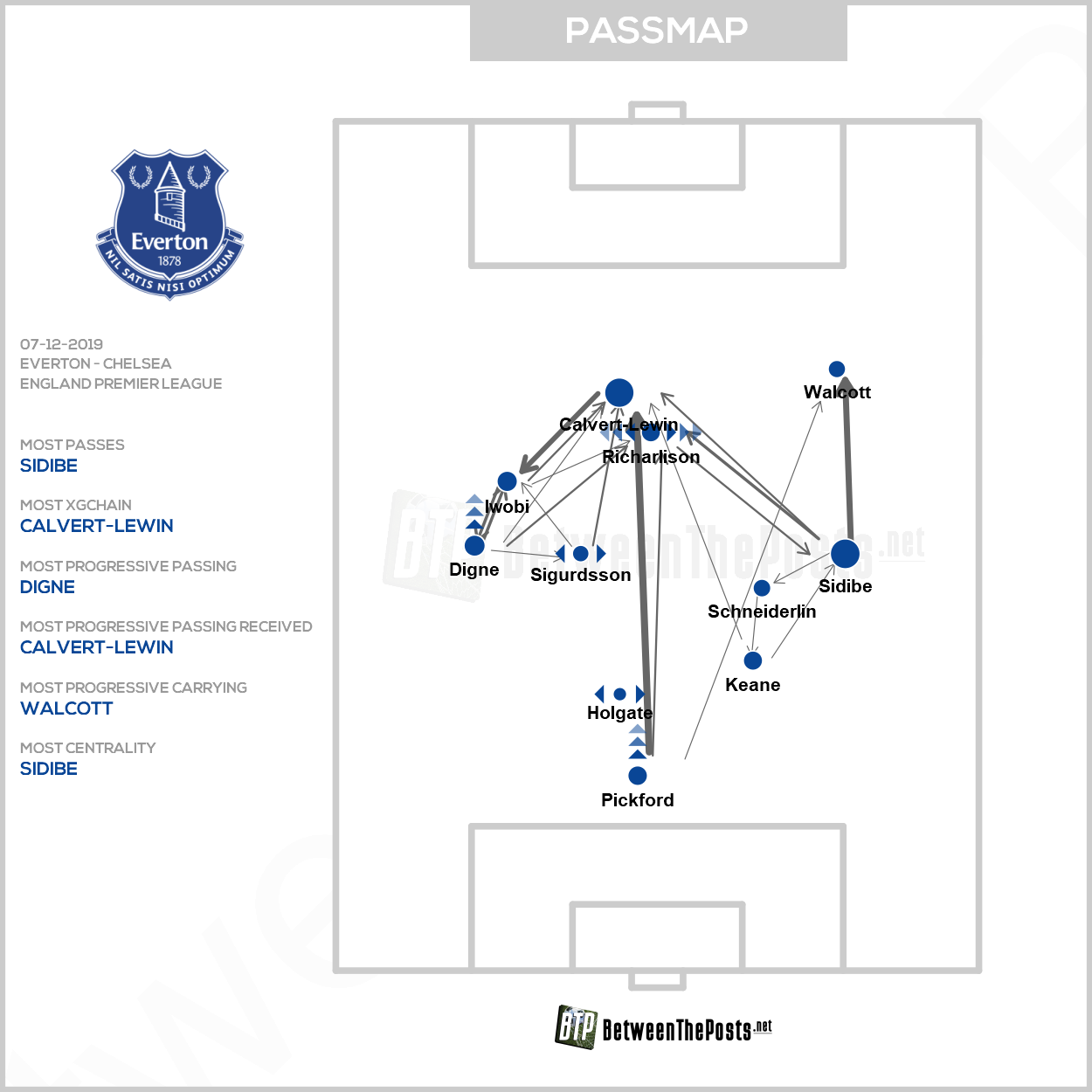 Chelsea control but chances are minimal

Chelsea’s rotations in midfield gave them an overload When one team has more players in a certain area or zone than the other team. in this area, as well as absolute dominance with the ball. Within the first half hour of the match, 79 per cent of the possession was controlled by Chelsea, while Everton were reduced to just thirty-nine passes – as a team – in this time period. 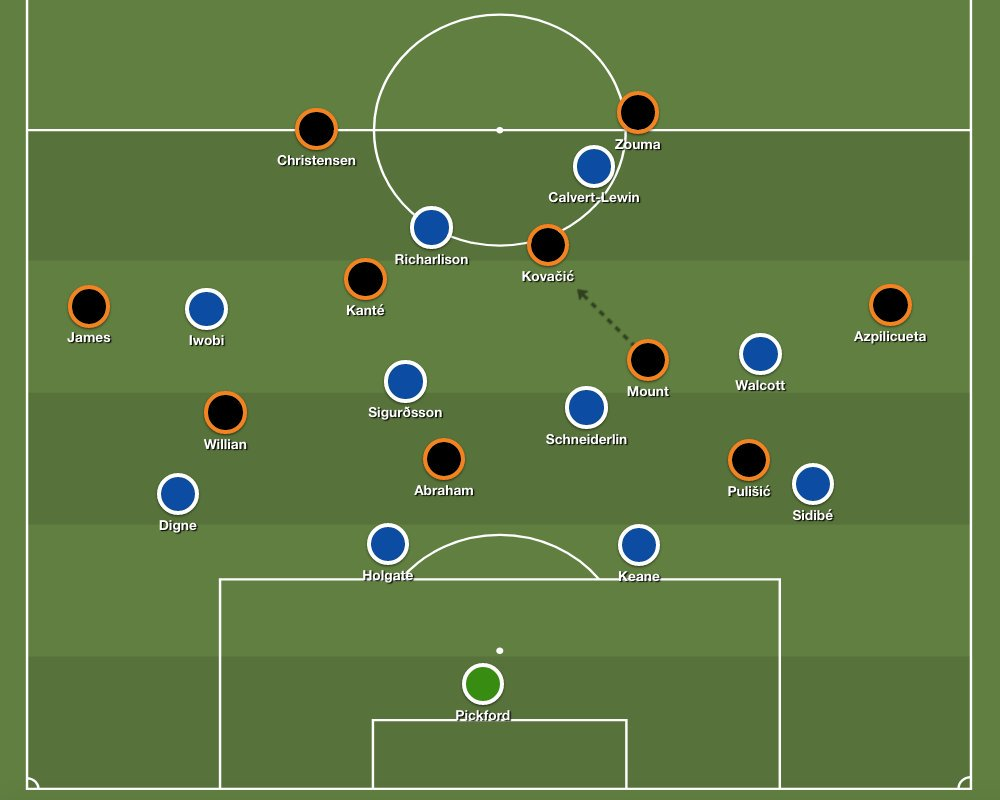 Chelsea’s 4-2-3-1 formation, with an interchangeable midfield, versus Everton’s 4-4-2 low block.

Their passes were vertical, constantly looking to feed their fullbacks, with their wingers dropping into the halfspace. If you divide the field in five vertical lanes, the halfspaces are the lanes that are not on the wing and not in the center. Because there is no touchline like on the wing, players have the freedom to go everywhere. But this zone often is not as well-defended as the very center. This makes it a very valuable offensive zone to play in and a lot of chances are created by passes or dribbles from the halfspace. However, passes lacked the penetration to put Everton in real danger and the hosts constantly put Chelsea players under pressure once they had the ball in their half.

One of Everton’s biggest problems throughout the campaign has been their midfield line, once broken, defensively they fall apart. Chelsea did not access central areas, but exploited space down the wide channels thanks to Lucas Digne and Djibril Sidibé’s positioning. Both men had moments where they pushed forward, creating space behind them.

This resulted in Chelsea getting into some great areas to cross into the area. However, Everton swamped the penalty area with Morgan Schneiderlin and Gylfi Sigurðsson also dropping into the penalty area. Lampard’s team did make progress, but recorded just four shots within the first half, the closest coming from Tammy Abraham – who got on the end of a Willian cross, but connection was far too weak to direct the ball towards goal. 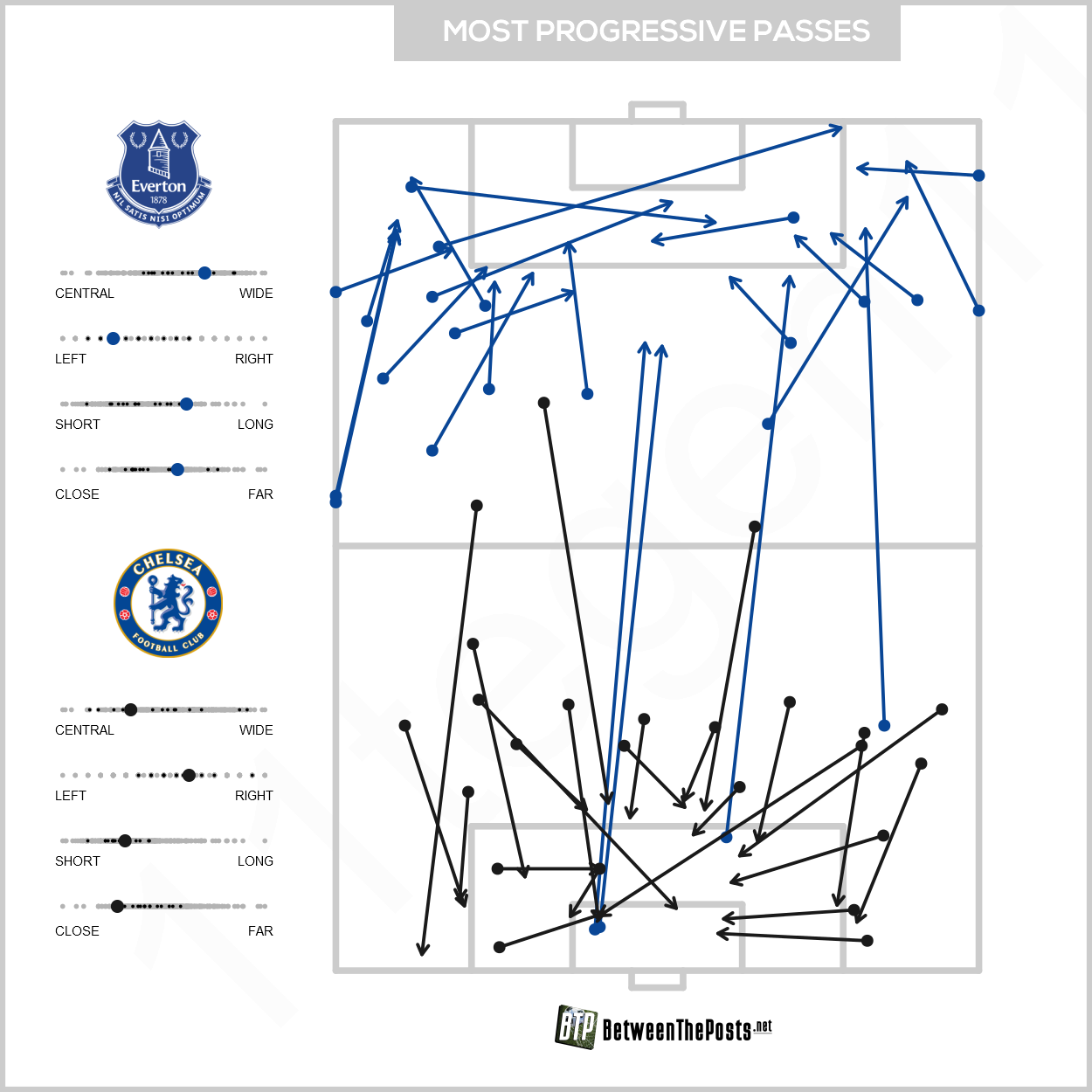 Everton were far more direct with their progressive passing than they have been this season.

Second half starts with a bang

Neither manager made a change at half-time, but the game reignited shortly after the players had come out of the tunnel. Kurt Zouma managed to deal with a lackluster cross from Theo Walcott, however, his horror clearance from the second phase led the ball to spin high up into the air just inside the penalty area. Both center-backs lost the scramble against Dominic Calvert-Lewin, who managed to beat both in the challenge and slide the ball past Kepa Arrizabalaga.

Just moments later, Everton dealt with another Chelsea attack with Lucas Digne clearing the ball out of the area. His clearance fell straight into the path of Mateo Kovačić, who produced one of the finest finishes you will see all season.

On the volley, Kovačić placed the ball perfectly into the bottom corner, to keep Chelsea hot on Everton’s heels. Two goals, just five minutes into the second half, just when it looked like Everton were going to build momentum and push further forward, Chelsea managed to regain control of possession.

With Chelsea applying more pressure, Everton’s low block A low block refers to a team that retreats deep in their own half out of possession, generally only disrupting their opponents around their own box. dropped deeper, leading to more congestion inside the penalty area. Lampard’s team had attempts, but the quality of these shots was poor – either coming from crosses or a go from distance. They managed to progress, but there was plenty of last ditch defending from Everton to keep them in it. 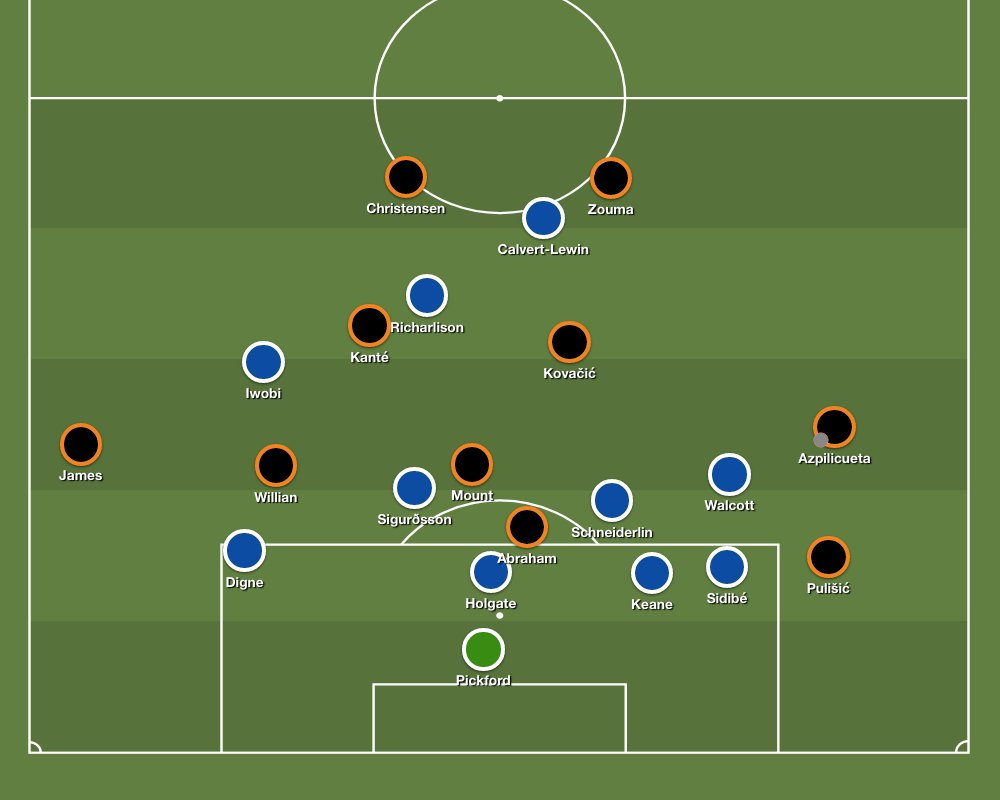 Everton’s low block kept Chelsea’s shot quality low, due to the numbers inside the penalty area.

Everton’s defensive setup withstood Chelsea’s dominance on the ball, but they would also threaten themselves with fast attacking transitions forward. Alex Iwobi would be an important player when carrying possession forward, while Dominic Calvert-Lewin showcased his dominance in aerial duels and holding the ball forward.

This would soon backfire and more calamitous defending from Chelsea continued. Arrizabalaga’s aimless pass was picked up by Theo Walcott, with the opposition all over the place. Following some scrappy play in front of goal, the ball arrived at the feet of Calvert-Lewin who steered home the winning goal, relief for the entirety of Goodison Park. 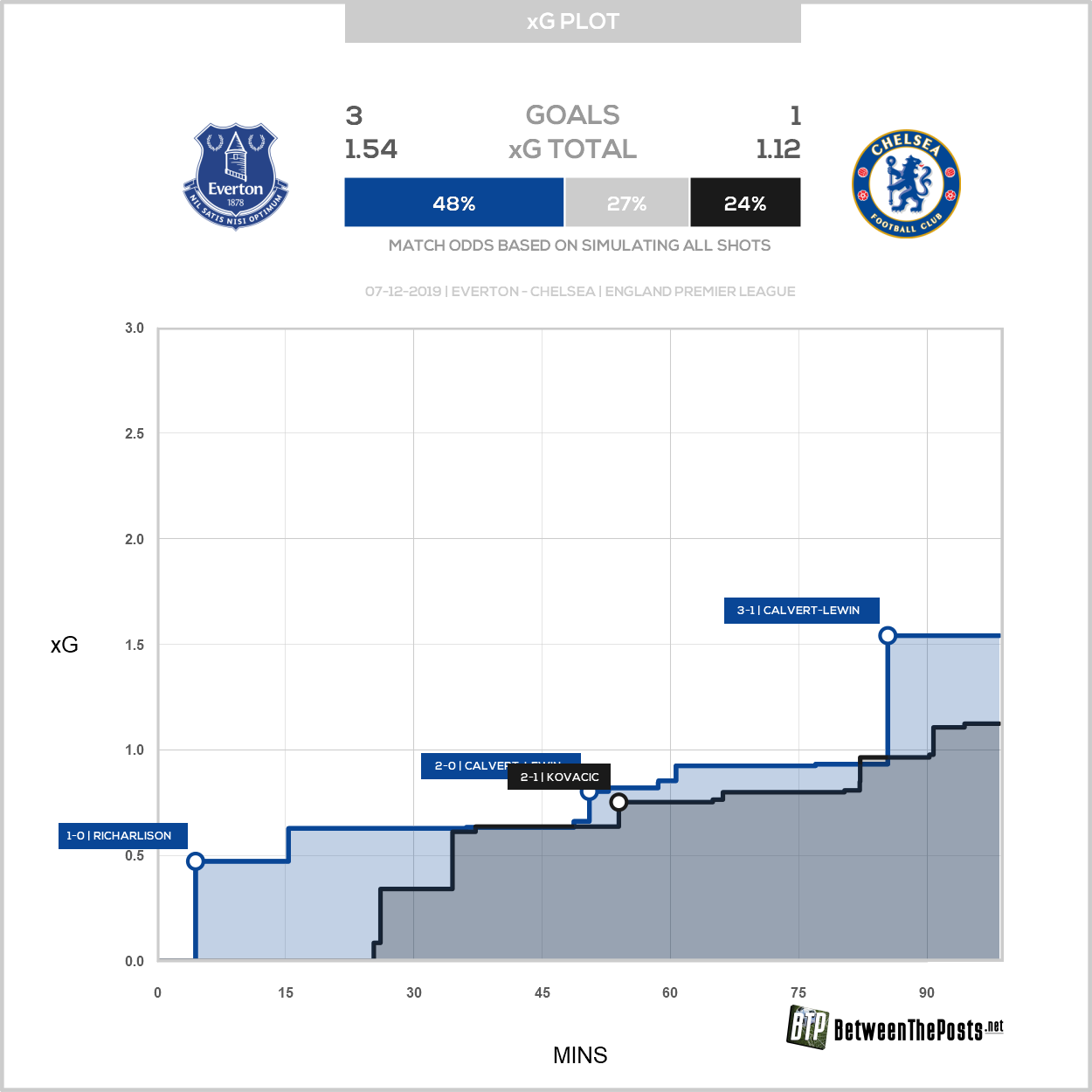 This was not an immense tactical battle, but the occasion and intensity made this an enjoyable watch. Duncan Ferguson kept it simple, a style which is simple to play, but only works with hard work and discipline when in the defensive shape. Everton made thirty-seven tackles, more than any Premier League team in a single game and the most any Everton side has made this decade. A strong start for Ferguson in his managerial career.

Chelsea impressed in stages, but sloppy defending and countless mistakes could reopen the race for the top four spaces, especially with Manchester United and Tottenham finding good results. Frank Lampard’s team could have easily scored more, or conceded more, either way, they need to find their form and fast.