Apart from a few good counterattacks, Everton did not trouble City’s defense at all. Their impressive defensive shape did partly nullify City for large parts of the match. Especially their very organized midfield set-up hindered the opponents. As for the visitors, they created a lot of good opportunities by stretching the play horizontally, creating multiple one-versus-one situations for Leroy Sané, which in the end was too much for Everton.

Marco Silva’s Everton find themselves in a bit of a rut at the moment. They currently sit in ninth place, having gathered just two league wins this year. Five changes were made compared to their 3-1 defeat to Wolves, with Lucas Digne, Jonjoe Kenny, Idrissa Gueye, Bernard and Dominic Calvert-Lewin all being introduced in Everton’s 4-5-1 system.

Following on from their victory against Arsenal, Pep Guardiola made two changes to his side against Everton as they looked to go top of the Premier League for the first time this year. In their nominal 4-3-3 shape, Leroy Sané returned to the side in place of Raheem Sterling on the left-hand side while John Stones started alongside Otamendi.

Everton positioned themselves in a narrow 4-5-1 shape, as Marco Silva’s side tried to block the center of the pitch through narrow wingers and central midfielders. The home side implemented this system with Andre Gomes and Tom Davies playing as central midfielders, alongside the excellent ball-winner Idrissa Gueye. On the flanks were Bernard and Theo Walcott, who alternated their movements between pinching into their respective halfspaces  If you divide the field in five vertical lanes, the halfspaces are the lanes that are not on the wing and not in the center. Because there is no touchline like on the wing, players have freedom to go everywhere. But this zone often is not as well-defended as the very center. This makes it a very valuable offensive zone to play in and a lot of chances are created by passes or dribbles from the halfspace. to make a narrow distance across the line of five out of possession, while immediately giving width in possession. 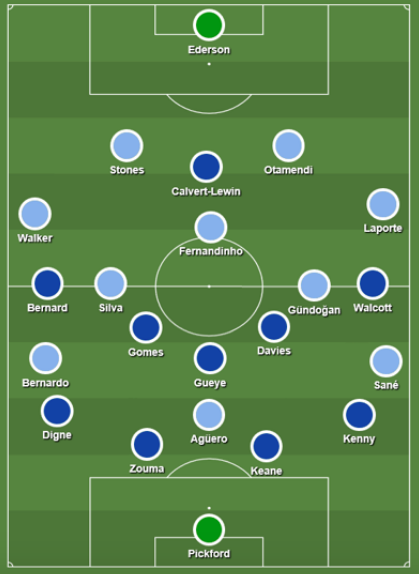 General positioning from both teams, depicted in City’s ball-possession.

As a lone forward, Calvert-Lewin’s role in the home sides pressing was to try and direct the oppositions build-up to one side. Often, the forward would curve his pressing run in order to prevent circulation back towards the original passer, meaning the ball-carrier would have to take the ball forwards into areas which Everton had covered.

However, Everton’s midfielders insisted on staying on the midfield, instead of supporting the isolated Calvert-Lewin. This meant a lot of space was given to City between their midfield and attacking lines. At times, it resembled a 4-5-0-1 with nobody occupying the centre circle. The lack of man-marking on Fernandinho meant City could easily access him in the center to engineer City’s attacks.

As Calvert-Lewin would try and direct City’s build-up, the lack of adequate support from the midfielders meant his efforts were somewhat wasted. Due to Fernandinho’s unmarked position, Otamendi and Stones could use the Brazilian for a wall pass to access the flanks or to easily progress the ball forwards centrally. Calvert-Lewin rarely attempted to press backwards, instead maintaining a position to occupy one of the center-backs, thus allowing Guardiola’s side to establish control in front of Everton’s midfield.

Despite City establishing a rhythm in midfield with Fernandinho, City’s attacking midfielders were not able to get on the ball a lot. Everton’s strong defensive organisation meant they struggled to penetrate. The hosts blocked passing lanes well and could either intercept or swarm vertical receivers with a ball-oriented approach if Fernandinho tried to progress through the advanced midfielders.

The difficulty they experienced in accessing David Silva and İlkay Gündoğan was also due to their positional behaviours. Just like in the match against Huddersfield, City’s eights were tasked with pinning their opponent to free spaces ahead of the oppositions midfield. Silva and Gündoğan often did just that, meaning Everton had to remain cautious in their pressing movements allowing more time on the ball for Fernandinho. Positioning between the lines is a huge part of Guardiola’s playing style, because it allows for more space and time on the ball for the lone midfielder.

For most parts of the game; Fernandinho was a lone pivot, positioned just ahead of the center-backs. Aiding the defensive midfielder were Laporte and Walker who offered an option to play down the sides. However, as Everton’s wide midfielders tucked inside, they often held a strong position to press diagonally against the fullbacks to prevent them from combining with one of City’s midfielders in the halfspaces. This became a problem in deeper areas, as Silva and Gündoğan were seldom found with passes, while the slow circulation between the deeper players did not shift Everton’s midfield enough to create exploitable spaces. 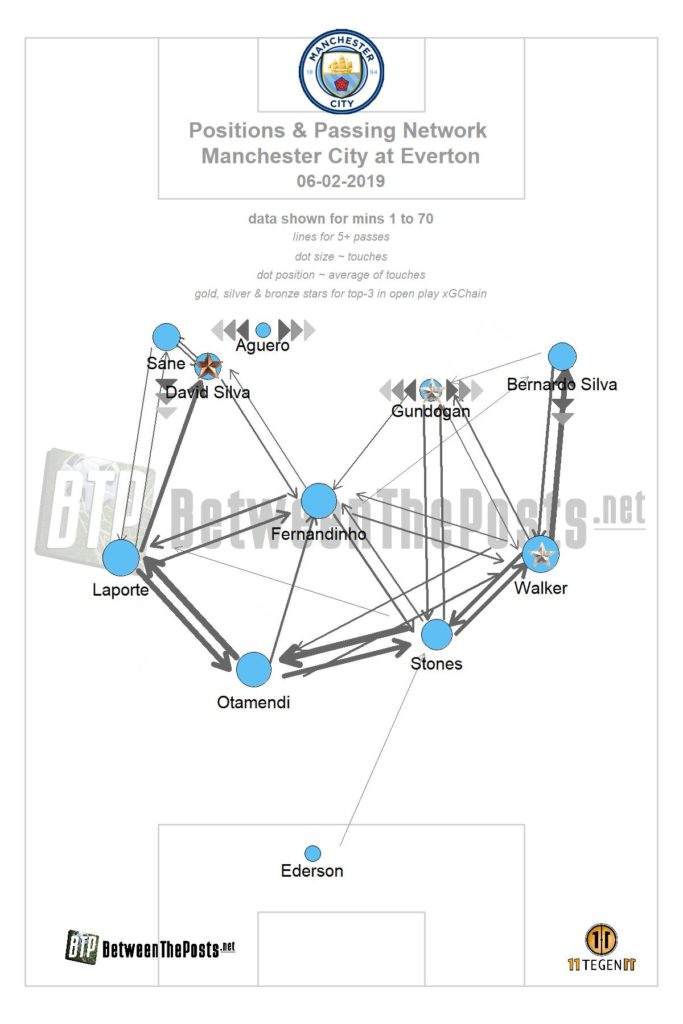 Recognizing the weakness, Stones often pushed onto the midfield, almost forming a double pivot 4-2-3-1 is one of the most frequently occurring formations in football. The two most defensive midfielders are called a ‘double pivot’. with Fernandinho while Walker and Laporte dropped to form a back-three. This new-found dynamic allowed quicker combinations between two central players in order to pull Everton out of their shape.

The congestion in central areas naturally had an effect on City’s ball progression, as it meant they were unable to connect with their advanced midfielders through vertical passes. As Everton retained their base positions, Stones and Walker used dribbling actions into advanced areas to exploit the spaces between Everton’s midfield and Calvert-Lewin. Once this begun, Everton was forced to step up and engage with the ball-carrier. This created temporary disorganization in their defensive organization.

For most of the game, City’s attacking strategy was to get into a position for a cutback from the wingers and fullbacks or to isolate Sané for diagonal dribbles. City had most of their success through overloading When one team has more players in a certain area or zone than the other team. the right wing before switching the play to Sané down the left. To facilitate this, David Silva drifted into the right halfspace to offer lay-offs to Bernardo Silva who was stationed on the wing. Walker functioned as deepest of the three on the right flank, in order to execute these long switches.

These diagonal passes to Sané were the origin of City’s best attacks as they sought to get the German into positions for direct one-versus-one situations against Kenny. Mostly, Everton anticipated this well and adjusted their positions to deal with these switches by increasing the pressure on his first touch to nullify the dangerous potential it proposed. When City were able to get Sané into a position to run in behind, the timings of his movements were largely poor, and he was caught offside too often.

As their attacking play became a bit more fluent, City managed to get the lead just before half-time, converting a set-piece from the left. Gündoğan feinted that he would be the kick-taker, drawing out half of Everton’s defensive line, before David Silva actually took the free-kick and placed it on Laporte’s head. The French defender headed in the opening goal, which was probably a deserved lead.

When you play against Manchester City, the transition from defense to attack is probably your best chance of scoring. Whenever Everton regained possession, they looked to play through City’s gaps very quickly with a pass down the right wing for Calvert-Lewin to run onto. Laporte was often caught upfield in these situations, thus City’s structure down the left proposed gaps for Everton to quickly penetrate. This was effective as City were unable to adjust their defensive shape quickly enough to cover the diagonal runs from Calvert-Lewin or Walcott, while Everton’s very direct passing after they won the ball negated City’s counterpressing actions.

Calvert-Lewin did well to reach the first ball frequently and created several dribbling progressions, which often stretched out City’s backline. The supporting movements of Walcott meant he could play a pass in behind to get into crossing or further dribbling positions. The retreating runs and readjustment of the defensive positions made defensive actions around the penalty area more chaotic, however Everton failed to capitalize on this due to poor execution and decision-making in the final third. The one-third of the pitch that is closest to the opposition’s goal. 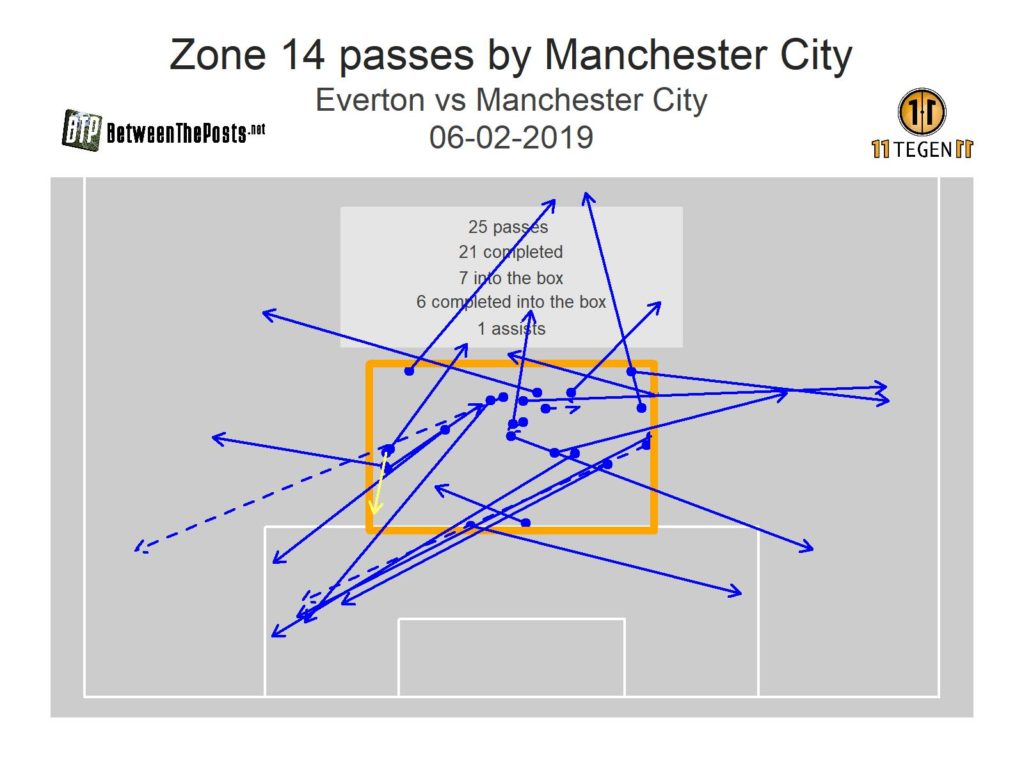 Notice the amount of passes played into the flanks.

Everton chase the game but it is too little, too late

With a greater need for territory and possession, Everton began to press more consistently to impose themselves much earlier on City’s ball-carriers. This was done through Davies and Walcott supporting Calvert-Lewin more when pressuring. This is exactly what Guardiola wants, and City were succesful in playing out of it, due to Fernandinho’s excellent movements to constantly create an open passing lane for the ball-holder and in turn bypass Everton’s pressure.

Initially, the balance of the second half was very even and both teams wrestled for control. Everton started quickly using their right-hand side dynamic in search of a breakthrough which was a key theme of the first half. They continued to play balls in behind for Walcott or Calvert-Lewin to run onto while the supporting movements from the ball-near central midfielders offered immediate combinations back inside.

As the home side became more adventurous in search of an equalizer, the tendency to counterattack from City increased as spaces started to generate allowing City to enter the last part of the pitch more often. This mainly stemmed from Everton’s increased desperation to score as they pushed their midfield line higher and thus were not able to cover defensive spaces as well, or prevent City easy access into forward players. Thus, the game become very stretched and typically open due to this.

In search of a way back into the game, Cenk Tosun was introduced for Walcott while Calvert-Lewin moved towards the right. Despite adding another forward player on, Everton barely generated any attacks that stressed out City’s defenders, while at the other end Jesus was introduced and scored City’s second goal from a counterattack to ensure all three points belonged to the Citizens.

A routine victory for City in the end, although there seems to be some structural issues. In the first 45 minutes, City sometimes struggled to break through a compacted 4-5-1 block, and relied heavily on diagonal passes which Everton defended relatively well. However, they got the three points and knowing Guardiola, these issues will shortly be solved, as they look to retain the title and prepare for the Champions League.

As for Everton, there are not many positives to really take away from this match. Yes, they were massive underdogs and their midfield game plan was executed fine, but it just is not clicking in the final third while they conceded another goal from set-pieces. This is something which needs to improve if they are to challenge the top-six, which is the club’s long-term goal. After back-to-back defeats, they will certainly look to bounce back against Silva’s former Watford side this weekend. 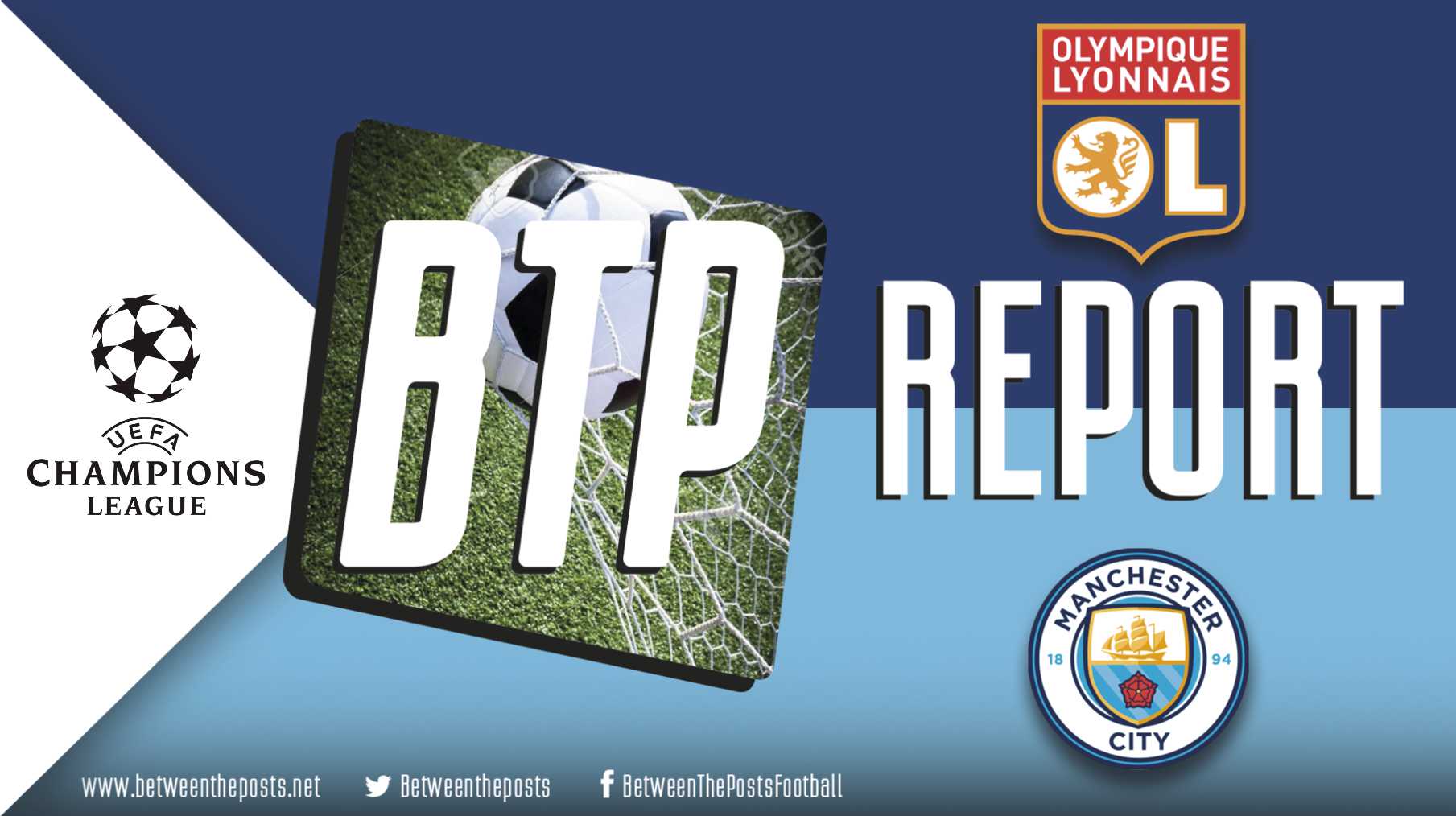 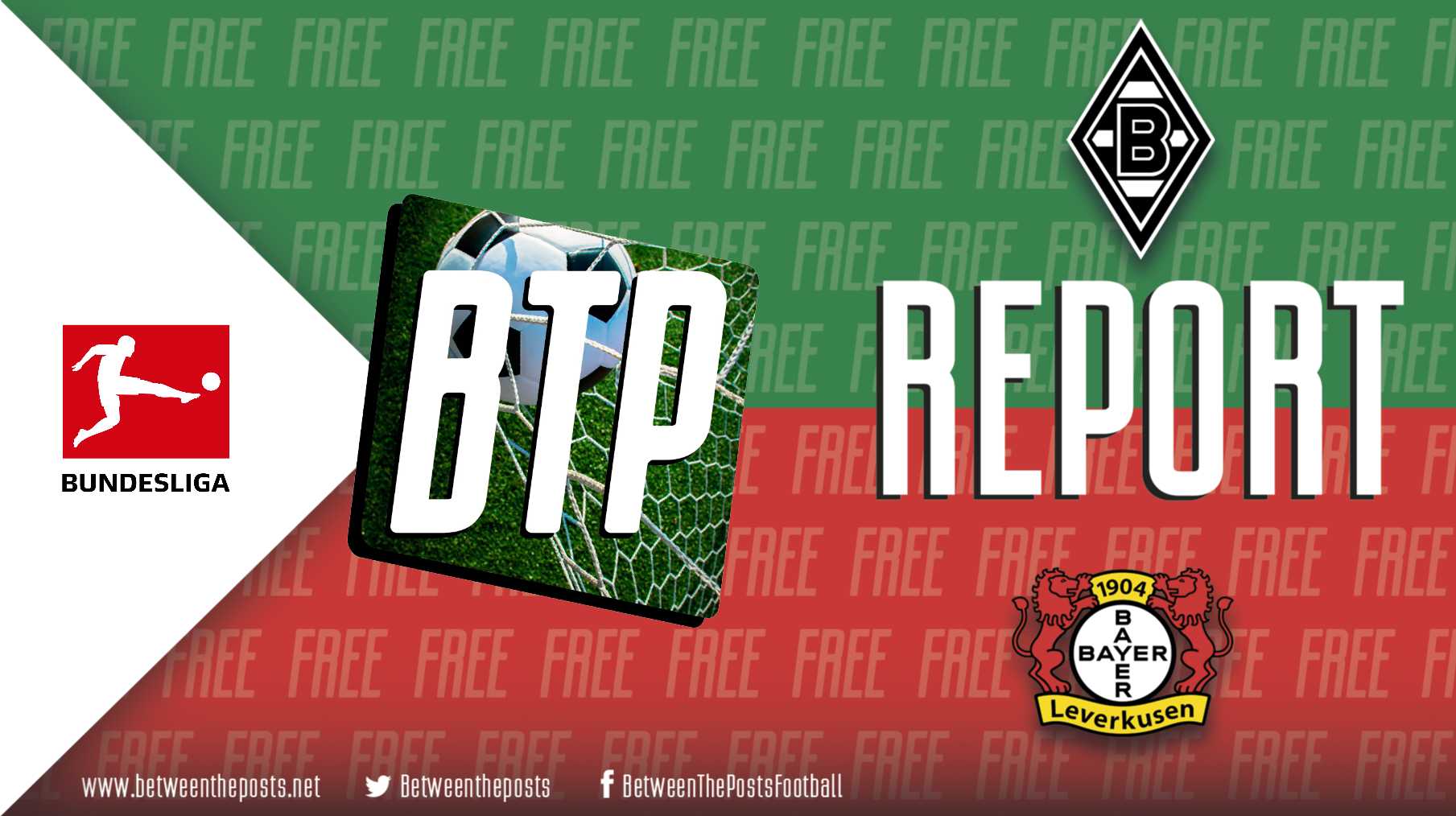