Celta’s failure to properly defend the Leo Messi – Jordi Alba connection allowed Barcelona to score twice in the first half and achieve a straightforward victory. Barcelona’s inconsistent pressing, combined with the substitutions of Beltrán and Lobotka, allowed Celta to improve during the second half.

Barcelona continued their stable run of results, now with four LaLiga victories in a row. Over the last month, this newest iteration of coach Valverde’s Barcelona is a version sacrifices control over the  game to be better at high-energy end-to-end situations. This higher tempo game plan has improved Barcelona’s offensive game—as shown by the overwhelming victories against Levante and Espanyol—but it is not beneficial for Barcelona’s defensive transitions.

Against Celta, Valverde hardly made any changes compared to previous weeks. With Semedo fit and in the starting lineup, Barcelona could go back to their usual 4-3-3 formation. Once again, this lineup featured the midfield trio of Sergio Busquets, Arturo Vidal and Ivan Rakitić, and a forward trio of Ousmane Dembelé, Luis Suárez, and Leo Messi.

This season, Celta has struggled to perform at the level expected of their talented squad. This led to the firing of coach Antonio Mohamed and the hiring of Miguel Cardoso last month. There is still much work to do before Celta can execute Cardoso’s game plan of possession and pressing, but results have improved. Celta has obtained two wins, one draw, and one loss in the four games under Cardoso.

Against Barcelona, Cardoso continued his use of an offensive 4-4-2 formation. In defense, keeper Rubén Blanco was protected by a back four that included Néstor Araujo and David Cosas as central defenders. Meanwhile, Hugo Mallo and Róbert Mazáň—who replaced suspended David Juncá—were the fullbacks. Surprisingly, the double pivot continued to be Okay Yokuslu and Jozabed Sánchez, even though Stanislav Lobotka and Fran Beltrán have both recovered from their injuries. In attack, Sofiane Boufal and Brais Méndez played on the wings while Iago Aspas and Maxi Gómez formed the striker duo.

Cutting off the connection between Lionel Messi and left back Jordi Alba should be the main defensive mission of any opponent facing Barcelona. Aggressively tracking Alba and blocking his passing lanes to Messi forces Barcelona to look for other, less effective pathways towards goal. Celta’s defeat against Barcelona can almost be entirely be attributed to their failure to defend the Messi – Alba connection.

Celta’s right midfielder Brais Méndez should have defended Alba throughout the game, yet he did not fully commit to this duty. Méndez often failed to track Alba once the left back got into the final third. He often handed over that task to his overworked teammate, right back Hugo Mallo. However, Suárez and Dembélé also pinned down Celta’s defensive line by threatening to run into space, thus forcing Mallo into a one-versus-two situation.

Mallo had to choose between staying with one of the Barcelona forwards or tracking Alba. Combine this with the failure of Celta’s midfielders to block the diagonal passing lane between Messi and Alba, and we get the explanation for Barcelona’s two goals.

Both goals followed a similar script. A Barcelona player made a diagonal switch of play towards Alba. Thanks to the two-versus-one situation against Mallo, Alba had time and space to produce a pinpoint pass to Messi, who easily shot at goal. For the first goal, Celta keeper Blanco stopped the shot and Dembélé pounced on the rebound to score. For the second goal, Messi scored himself.

The failure to defend Messi – Alba was not Celta’s only defensive problem. Their defensive line is still in development and was not well synchronized against Barcelona. With a few quick passing combinations, Barcelona could disorder them and make them lose track of the runs into space of Vidal and Barcelona’s forwards. 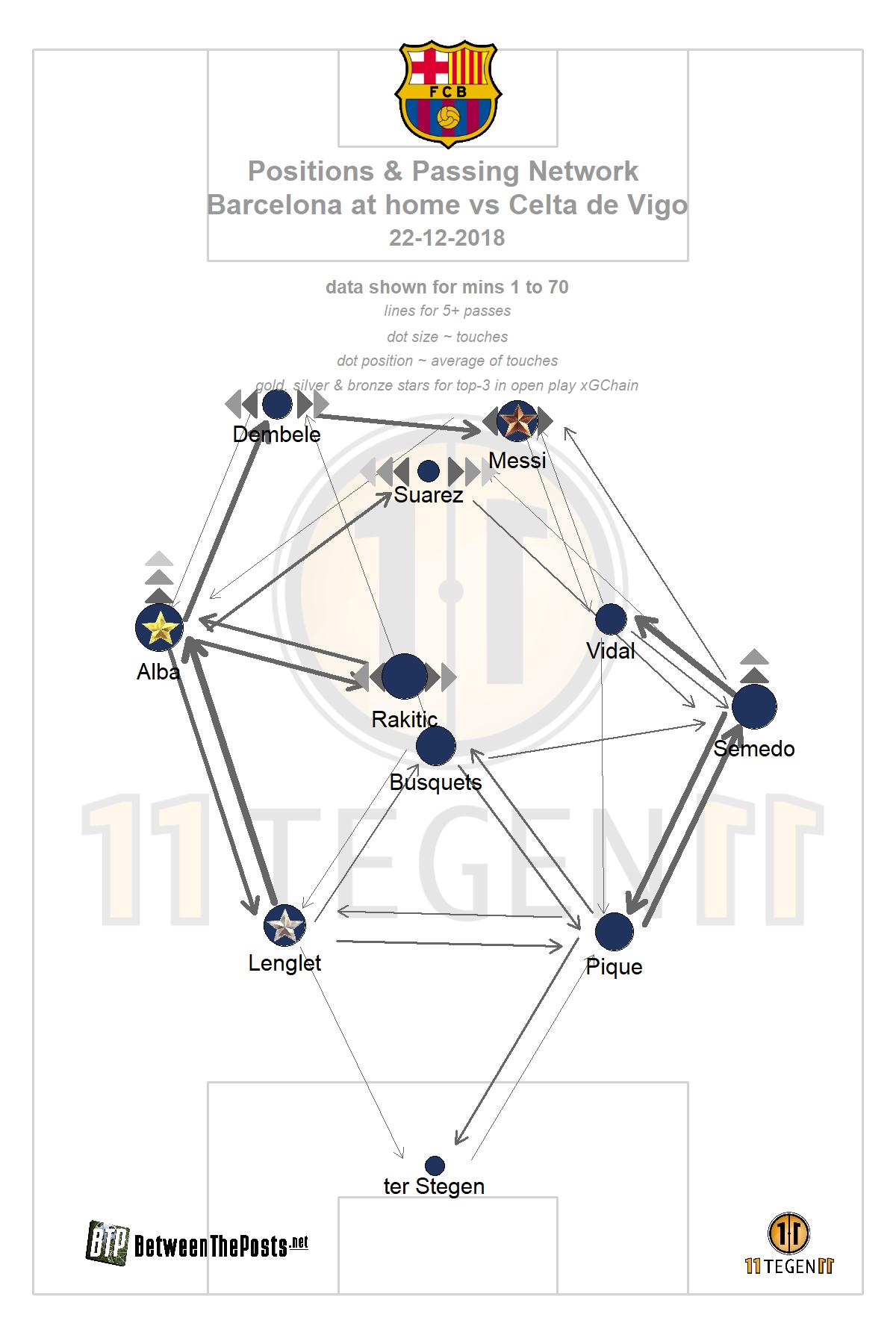 This is a very different passmap from what we’re used to from Barcelona. Playing around the midfield, rather than through it.

Against Barcelona, Celta continued the same structure in possession that manager Cardoso has instructed since his first game in charge. Usually midfielder Yokuslu dropped in between central defenders to form a back three when playing out from the back. Meanwhile, Jozabed Sánchez and the fullbacks provide the next “step” in Celta’s buildup game (sometimes Yokuslu and Sánchez would switch roles). Then, wide men Boufal and especially Méndez would provide the final, vital step to link up midfield with Celta’s star attackers, Gómez and Aspas.

Against Barcelona, however, neither Boufal nor Méndez were as productive as usual. Both average a combined four to five key passes per game, yet against Barcelona they only produced one. Despite Méndez’s best efforts to move to the center, break Barcelona’s pressing and connect all the pieces in his team’s disjointed attack, Celta struggled to progress through the center and create chances.

Barcelona’s good pressing game and solid defensive line certainly played a role in stifling Celta. However, it is also true that Celta’s attackers—except for Méndez—were not having a great day. This is particularly surprising in the case of Iago Aspas, who has traditionally excelled at exploiting the spaces left by Barcelona’s defense.

Within the first ten minutes of the second half, Cardoso made two key substitutions. Yokuslu was replaced by Stanislav Lobotka while Fran Beltrán came on for an injured Iago Aspas. Celta effectively changed to a nominal 4-2-3-1 shape, which often looked like a 3-5-1-1 when in possession. 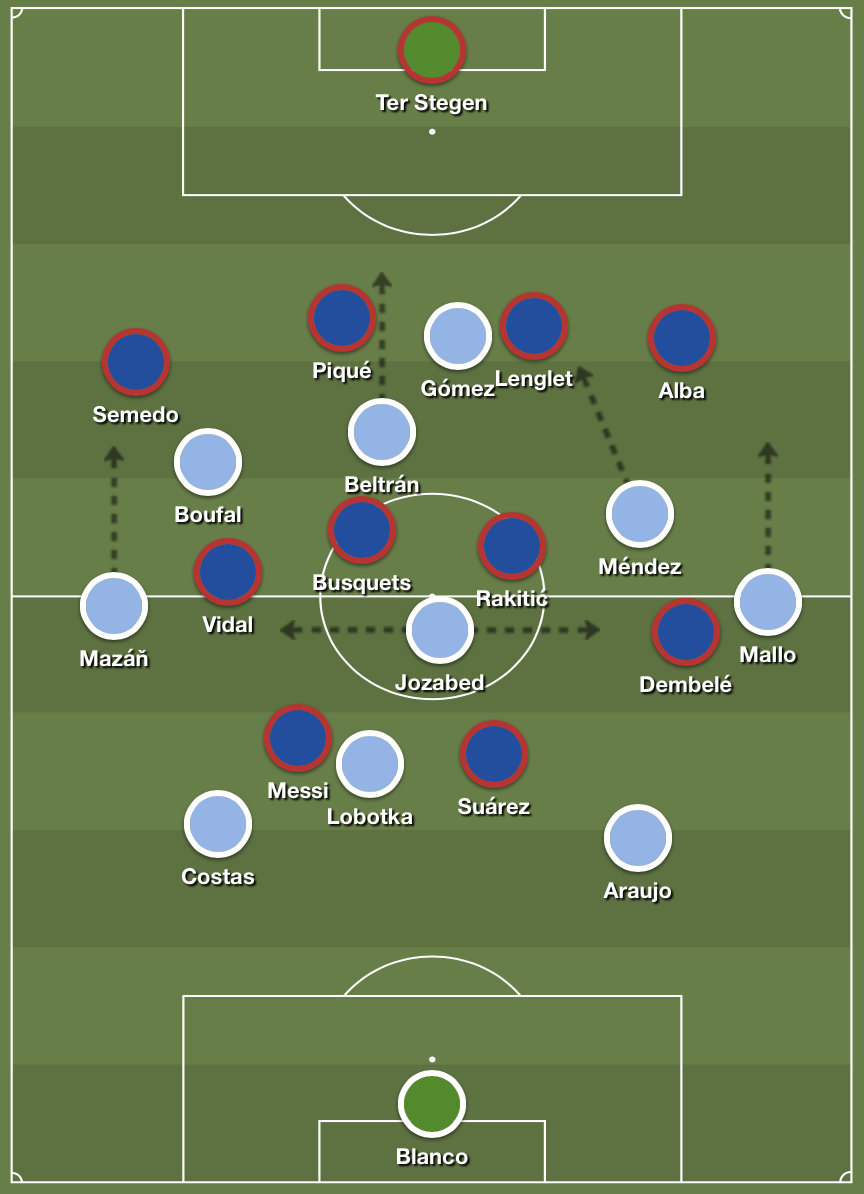 Lobotka is a significantly more press-resistant player than Yokuslu. His line-breaking passing and ball-carrying improved Celta’s ability to play out from the back, break Barcelona press and link up with the inspired Méndez. Meanwhile, Beltrán was assigned the role of number ten, a rather unusual choice since Beltrán usually plays deeper. This meant Beltrán intervened less often in Celta’s buildup, being more involved in exploiting spaces in Barcelona’s defense, breaking into space and loading the box.

Valverde responds with Coutinho and Arthur

Barcelona struggled to control the game in the face of Celta’s improvements. One could argue that—with two goals in the bag—they purposefully gave away possession to Celta, and that is true to a certain extent. Barcelona dialed down the intensity of their pressing during the second half, with the team often shifting a 4-4-2 medium block A medium block refers to a team that retreats in their own half out of possession, generally only disrupting their opponents some way into their own half. that gave Celta more time and space to play out from the back.

However, Barcelona also struggled more than expected in stringing longer possessions against Celta’s improved pressing game – thanks to Lobotka and Beltrán. This issue likely inspired Valverde to replace Vidal with Arthur Melo and Dembélé for Philippe Coutinho. The two Brazilians represent the slower version of Valverde’s Barcelona, one that is better at controlling games.

To a certain degree, Valverde’s substitutions worked. Before these substitutions, Celta had dominated possession in the second half – 66% versus Barcelona’s 34%. After the substitutions, possession was much more evenly split. However, this increase in midfield control came at the cost of decreased attacking. Without Dembélé and Vidal running into the spaces behind Celta’s defense, Barcelona failed to exploit Celta’s defensive problems as well as before. 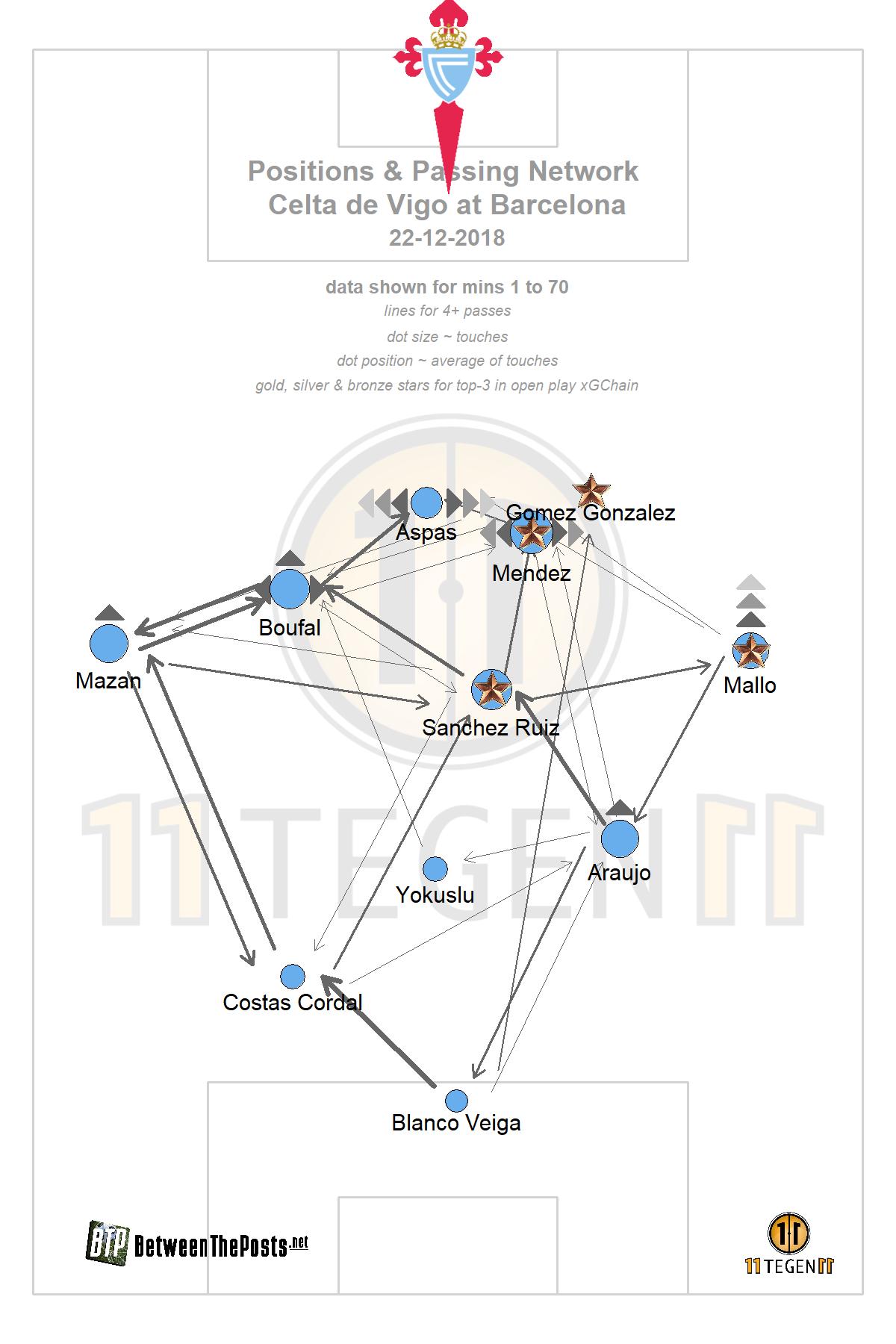 The final boost to Celta’s offense was provided through the substitution of Pione Sisto for the lackluster Boufal in the 76th minute. Unlike Boufal, who stays closer to the wing, Sisto moved freely throughout the entire attacking front. This mobility allowed Sisto to create passing combinations and overloads with Celta’s talented playmakers: Lobotka, Beltrán and Méndez. This led to a succession of five shots from Celta in the six minutes that immediately followed the Sisto substitution.

Despite Celta’s best efforts in the second half, they failed to create big chances. Barcelona central defenders Gerard Piqué and Clément Lenglet have delivered excellent performances in the last few weeks, and Celta would be no exception. The defender pair were great at anticipating Celta attackers and covering their midfield’s back, while also clearing most dangerous passes away from their box.

After a couple of weeks of inspired attacking performances, Barcelona had a more lackluster game against Celta, both individually and collectively. Perhaps the obvious spaces behind Celta’s defense led Barcelona players to become too precipitated and vertical in their attacking. This might explain why Barcelona struggled to attack as a unit and did not create more chances. The substitutions of Coutinho and Arthur gave Barcelona more possession and midfield control, but then Barcelona’s attack lost its off-the-ball dynamism. It is clear that Valverde has more tactical tinkering to do if he wants to find the perfect balance between midfield control and a dynamic attack.

Celta and Cardoso still have significant work to do themselves. The high defensive line was chaotic and unsustainable against a top opponent like Barcelona. This will need to improve for Celta to obtain good results with Cardoso’s possession and pressing game plan. However, the second half also offers Celta some hope. They have many talented playmakers and attackers, and Cardoso’s playing style might just give them the right context to get together, string effective possessions and create chances. 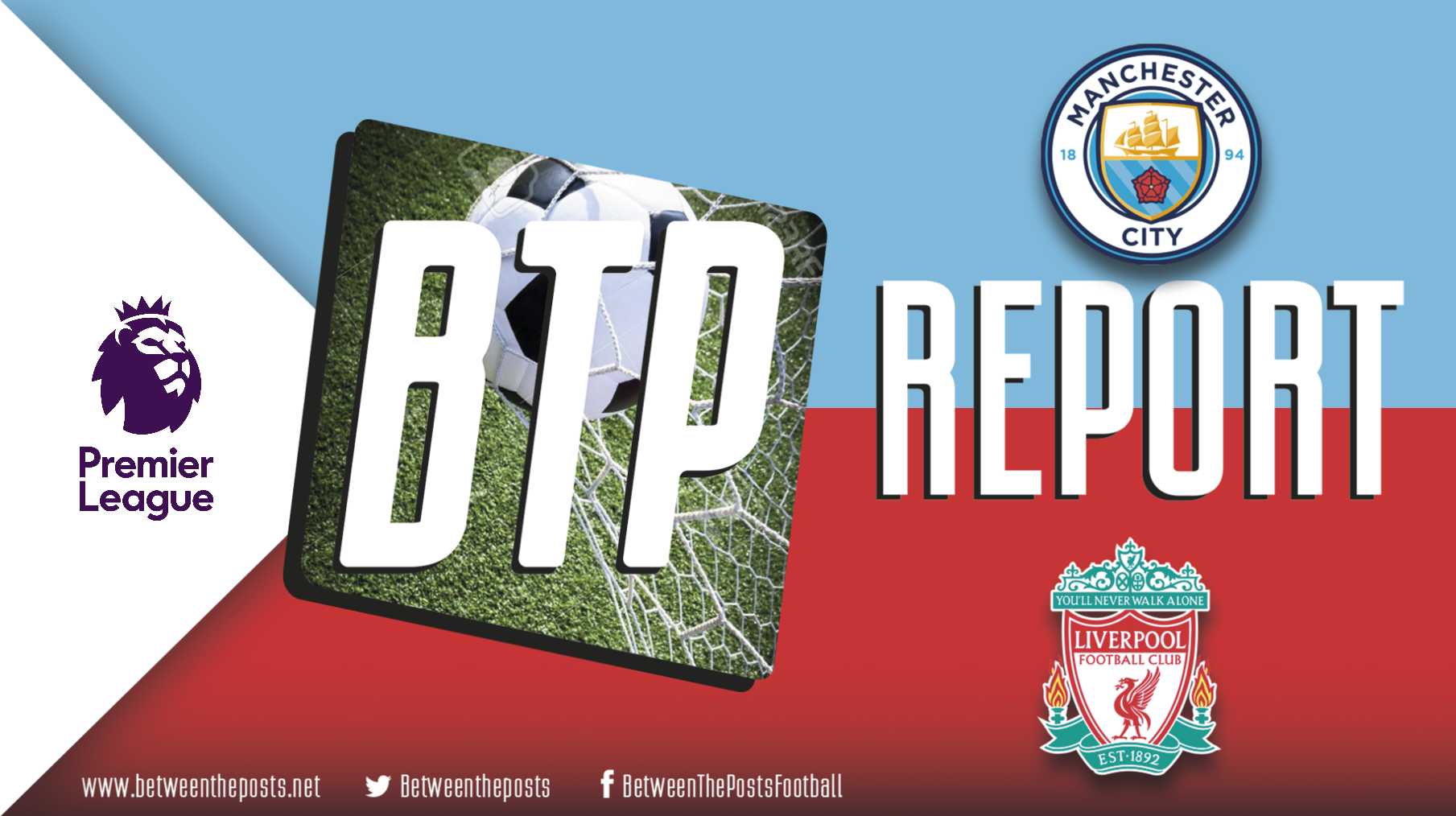 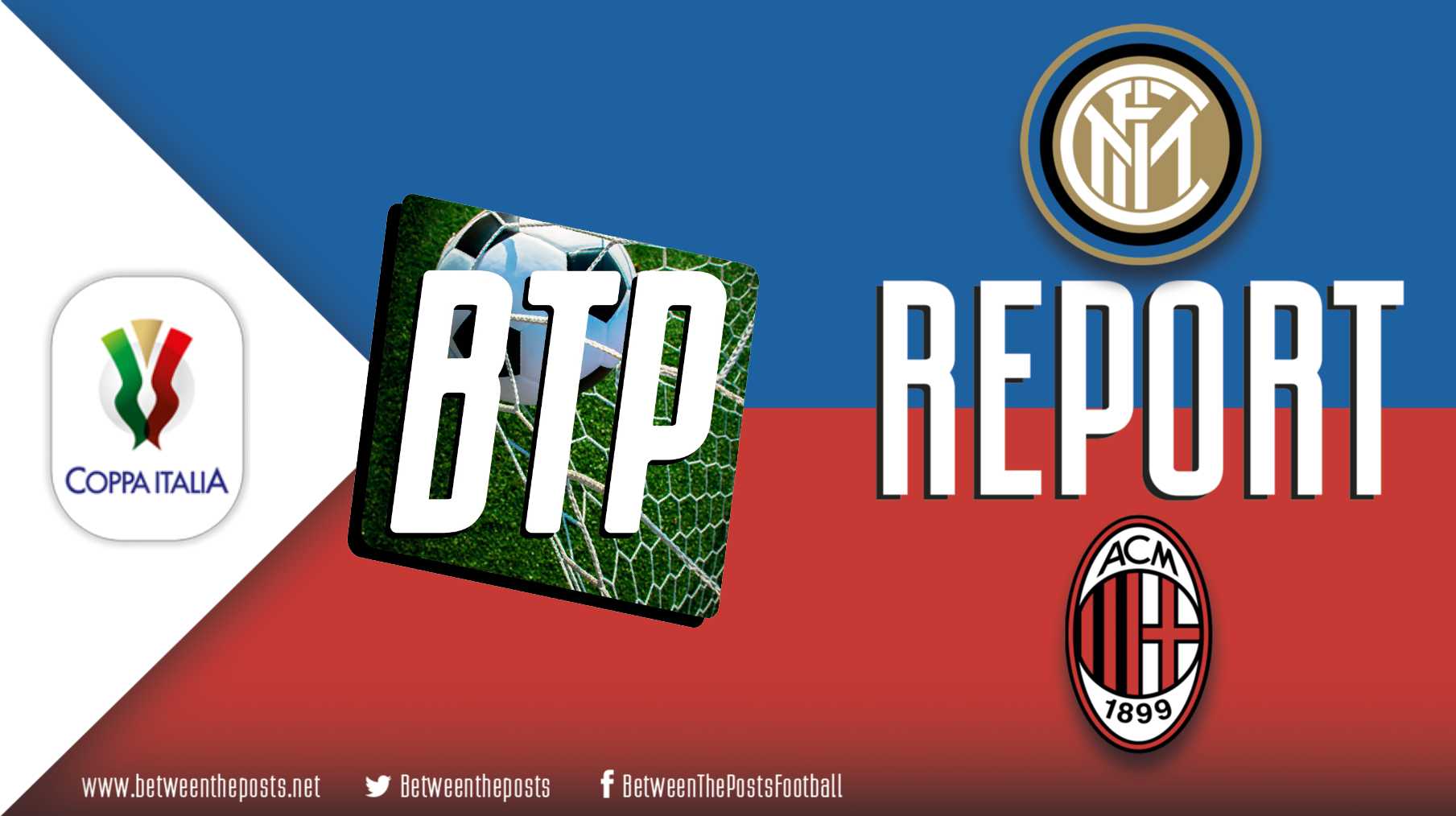