In this slow-burner of a match, Fiorentina tussled for control of a match that always felt slightly out of their reach. So, while Milan did a solid enough job of threatening when keeping the ball within the home side’s half, Vincenzo Montella’s side failed when attempting to do the same.

Two Coppa Italia semi-final blowouts met in the league this weekend as both sides looked to put varying spouts of poor form behind them. Fiorentina were winless in all competitions since February – as series stretching to fourteen games including tonight – while Milan had only won two of their last nine matches in all competitions – hardly the form of a side with aspirations of a top four finish.

Former Milan manager Montella made various changes to his Fiorentina side. Reverting from the 3-5-2 setup that lost 1-0 to Empoli last weekend, to a 4-3-3 system this weekend, the manager also made three changes in personnel. Jordan Veretout, Giovanni Simeone and Germán Pezzella all departed the team, with Bryan Dabo, Federico Chiesa and Vincent Laurini taking their respective places.

Gennaro Gattuso made four alterations to his side that beat Bologna 2-1 last weekend. Alessio Romagnoli returned ahead of Cristián Zapata in defense, while temporary exits from the midfield for Lucas Biglia and Lucas Paquetá through injury and suspension saw Tiemoué Bakayoko and Hakan Çalhanoğlu take their spots. Fabio Borini then took up Çalhanoğlu’s previous position in the front three. 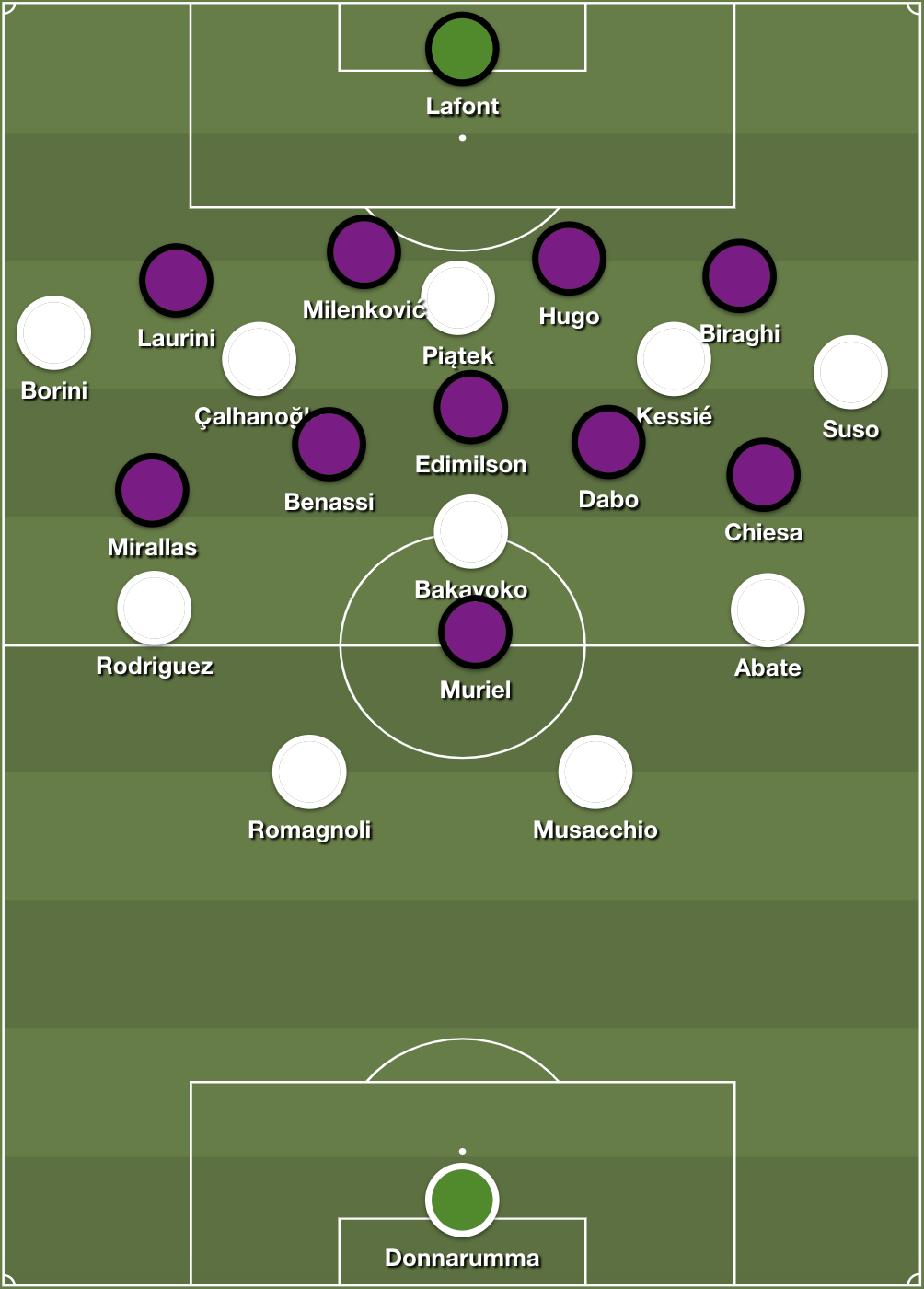 Starting lineups for both sides.

Milan ease their way into proceedings

With every game now a must-win for Gattuso’s men, the start Fiorentina had would have been far from ideal, as the home side took early control of the ball. Up against a 4-1-4-1 formation – where the far-sided winger tucked in to mark the far-sided center-back and form an asymmetrical 4-4-2 shape – Fiorentina were always under pressure.

Their attempts to worm their way out of these scenarios included Marco Benassi pealing wide of the central-midfielders to combine with Laurini, who was handed the ball the most in this buildup phase. Either that, or he would target any of the forwards, particularly Luis Muriel and Chiesa, who had been instructed to provide an attacking link by dropping off from the last line and offering between the channels of Milan’s midfield.

The two forms of progression, in many senses, proved to be the most successful ways for Fiorentina to mount attacks later on. 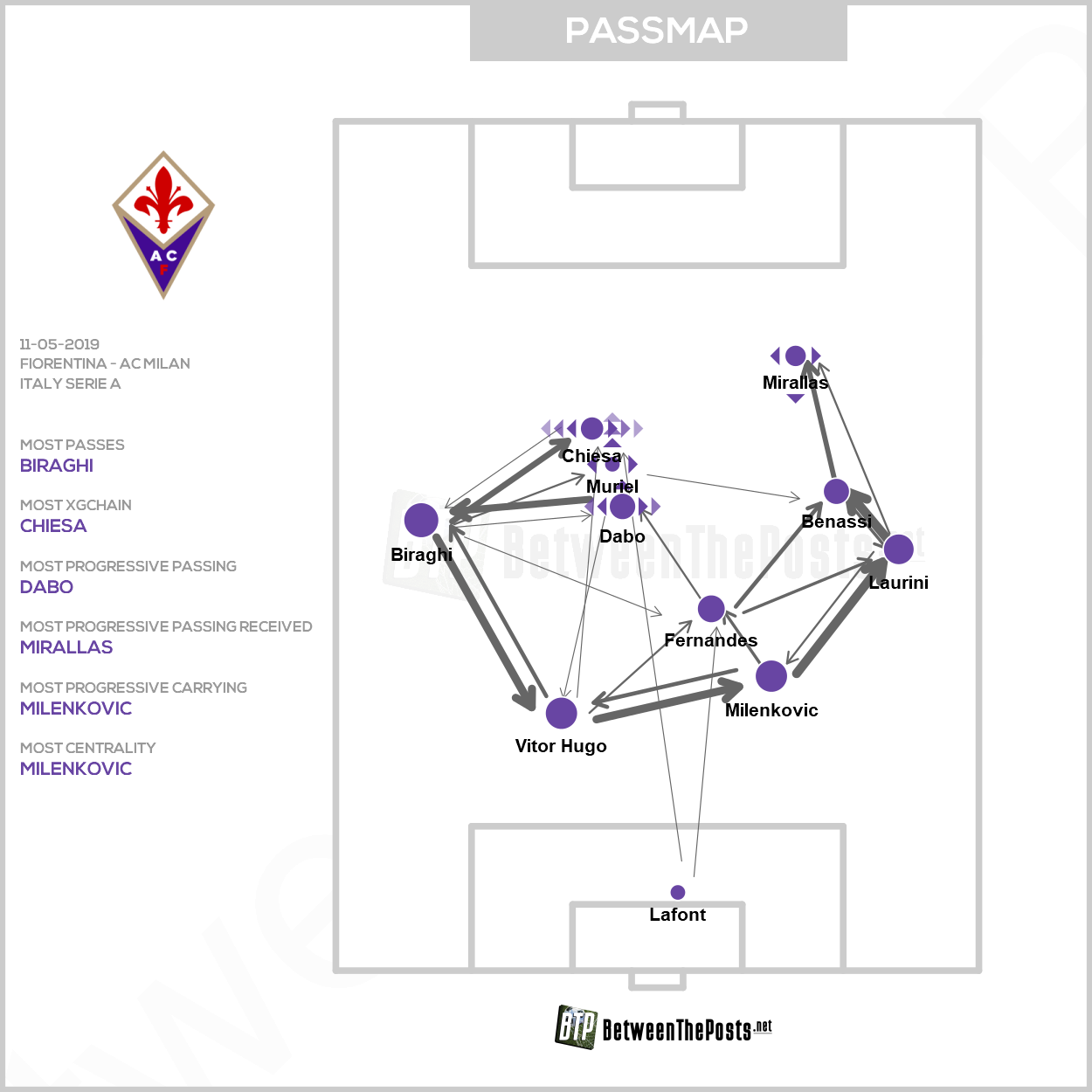 Fiorentina were very dependent on their fullbacks to circulate the ball up the pitch.

Despite this positive early start, the hosts were not exactly making many, or even any, dangerous inroads further up the pitch. A lot of their play was limited to intricate combinations within their own third that were well pressured by Milan. So, with Fiorentina’s possession approach continuing to fall short, the visitors soon gained some confidence and, with that, began to take control. This is where the suffering started for the home side.

As Milan were so focused on playing down the right-side, it was a bit of a surprise to see Chiesa being handed a fundamental defensive role, there, and it ended up proving quite costly. In the 4-1-4-1 setup of theirs, Fiorentina had a very difficult time defending the right halfspace. If you divide the field in five vertical lanes, the halfspaces are the lanes that are not on the wing and not in the center. Because there is no touchline like on the wing, players have freedom to go everywhere. But this zone often is not as well-defended as the very center. This makes it a very valuable offensive zone to play in and a lot of chances are created by passes or dribbles from the halfspace. Initially, Milan would try and access Franck Kessié in this position by going wide to Ignazio Abate when Chiesa was still in a high position. However, as the game progressed, Abate and other deep players were feeding it directly to him with few problems.

Kessié would then look to drive inside or lay it off wide for Suso to cut in with. Most of this, to begin with, was of little consequence to Fiorentina, though. 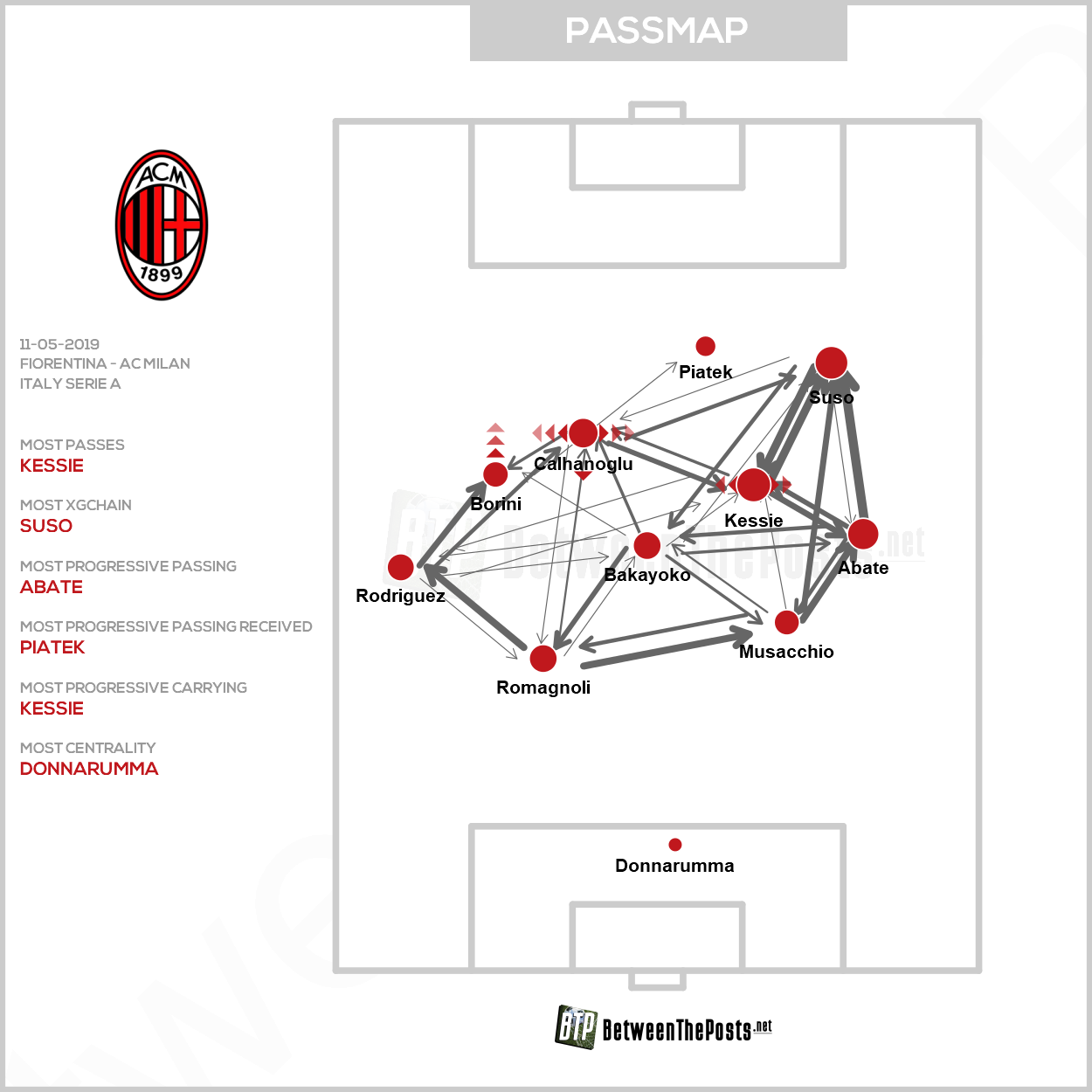 Milan’s right hand side, with the triangle of Kessié, Suso and Abate was enjoying a lot of passing.

While the home side’s zonal shape held its own when the away side where keeping it around the halfway line, their struggles were amplified when they were forced to retreat. This is where Chiesa’s lack of intensity cost them. With Chiesa and Dabo being the main blockers of that right halfspace, it was important they maintained awareness and compactness. However, they did no such thing, or at least Chiesa did not.

The winger was in a mind of his own, meaning he often left horizontal gaps that enabled Milan to get through to the inside attacker or out wide with ease, thus giving Gattuso’s side substantial control in Fiorentina’s own third.

This was first properly exploited when Çalhanoğlu had popped up in the right back position, then finding Suso inside with no problem, before running on in support unmarked. Suso returned the ball and the Turkish midfielder got a drilled shot off which was denied by Alban Lafont.

The other danger that came as a result of this was the time and space Suso had to cut in and swing in dipping crosses. In the twenty-fifth minute, Mateo Musacchio casually strolled forward before poking the ball just in front of Kessié, who was being pressured by Vitor Hugo in lackadaisical fashion. He played it wide and Suso drove in before delivering a vicious in-swinger that was met by the head of a Fiorentina defender, who was outnumber one-to-three in the middle. 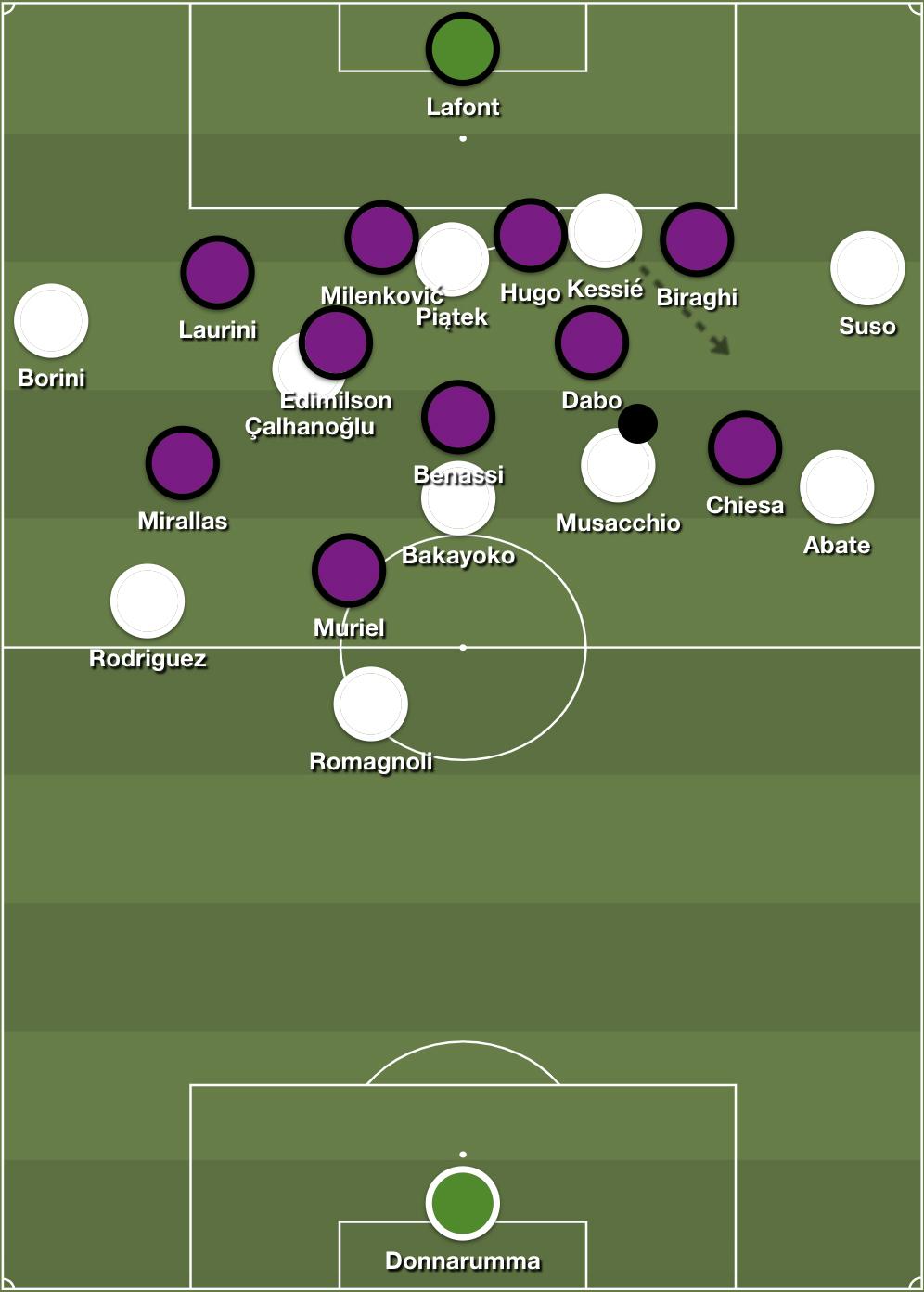 Scenario depicting Musacchio bringing the ball up the pitch on the right side.

So, it should have been of little surprise to see this form of attack result in Milan taking a first-half lead. Following another Kessié run down the halfspace – another of which was passively followed by Hugo – and a cleared cutback, Bakayoko was on site to claim the loose ball. This lack of support on the edge, in order to claim loose balls, was part of the reason Milan had cruise control for large phases of the opening half, as Fiorentina’s midfield had sunk within the defense without offering a way of escape. Bakayoko then laid it off first time for Suso, who proceeded to deliver the same in-swinger, this time finding the glancing head of Çalhanoğlu, neatly finding the far corner.

What did not help Fiorentina’s cause in the first half was just how wasteful they were on the ball. When they needed to relieve themselves from the constant onslaught of Milan attacks, they refused to play it simple, they instead went too direct down the flanks where they were heavily outnumbered and thus gave up possession.

Their best shot at opening up Milan came through Benassi receiving between the lines. He did so in the same way Kessié had been doing. From there, they would quickly shift it across to find the overloading runner from the left  – usually Chiesa or Cristiano Biraghi. However, his, and whomever else’s, deliveries left a lot to be desired.

Fiorentina respond as Milan drop off the pace

Unlike their opponents, who had clearly dropped down a gear, Fiorentina came back out in the second half reinvigorated.

The visitors were now more than content to give up possession, trusting in their 4-5-1 setup to see them through. However, the early signs were not so positive as Fiorentina frequently exploited the halfspaces on either side to make inroads. Still, though, the majority of these resulted in cutbacks which were easily dealt with. By the end, Fiorentina had completed zero – I repeat zero – of their twenty-six cross attempts! 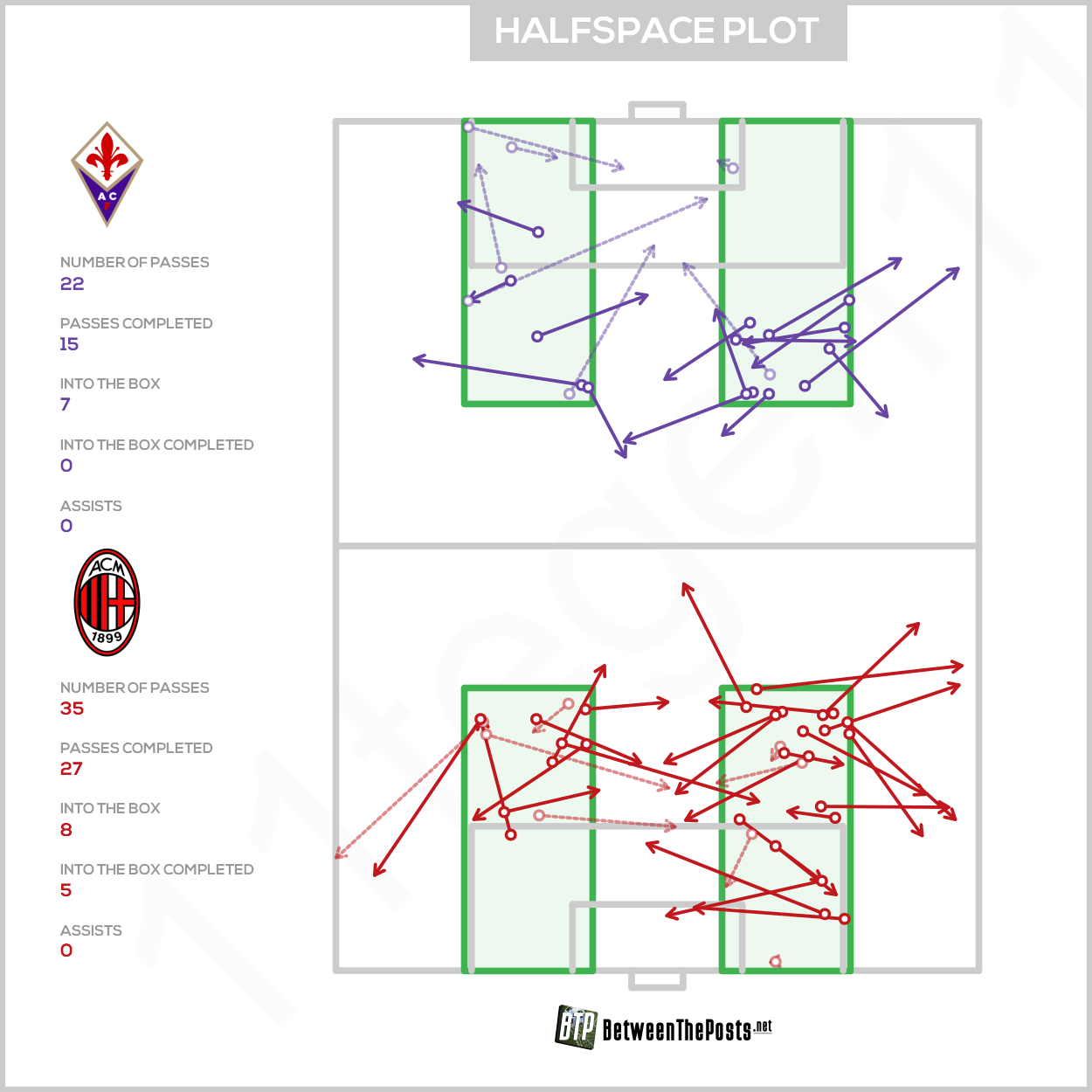 While Milan’s play in the halfspaces resulted in five completed passes into the box, Fiorentina failed to make a single completion from this part of the pitch.

And, what seemed like some regained control for Fiorentina, soon turned out to be a bit of an illusion when Milan started to force higher turnovers. As Edimilson Fernandes was a lone receiver in the middle as part of their 4-3-3 formation, a stray touch from him could be pounced on by any of the six surrounding Milan players, who were all positioned closer to the ball than any of Edimilson’s teammates.

By virtue of this, the turnovers led to a number of dangerous counterattacks that really stretched the game, which was more beneficial for Fiorentina, as they had struggled to pull off the same right-to-left move against Milan’s low block. A low block refers to a team that retreats deep in their own half out of possession, generally only disrupting their opponents around their own box.

This was how the home side’s best chance came about, as Mirallas, during attacking transition, fed it into Chiesa, who had dropped deep to receive. The winger, now inside, brilliantly disguised a return through ball to the Belgian who was now in behind. He cut in leaving Ricardo Rodriguez on the floor and then attempted to trick Gianluigi Donnarumma by going for the near-post from a slightly skewed angle on his weaker foot. It was easily stopped.

This pattern continued with both sides being handed chances. In the 76th minute, as Kessié drove recklessly through midfield, substitute Gerson dispossessed him and set Chiesa away against the defense. He cut in and fired at Donnarumma, who fumbled his save and had his blessings saved by Romagnoli, who was there to clear just in time.

Five minutes later, another giveaway in the aforementioned circumstances, saw Benassi being closed in on by Milan’s midfielders. His hesitation led to him losing the ball and created a two-versus-two counterattack, which ended with substitute Patrick Cutrone drilling just wide of the far, left post. 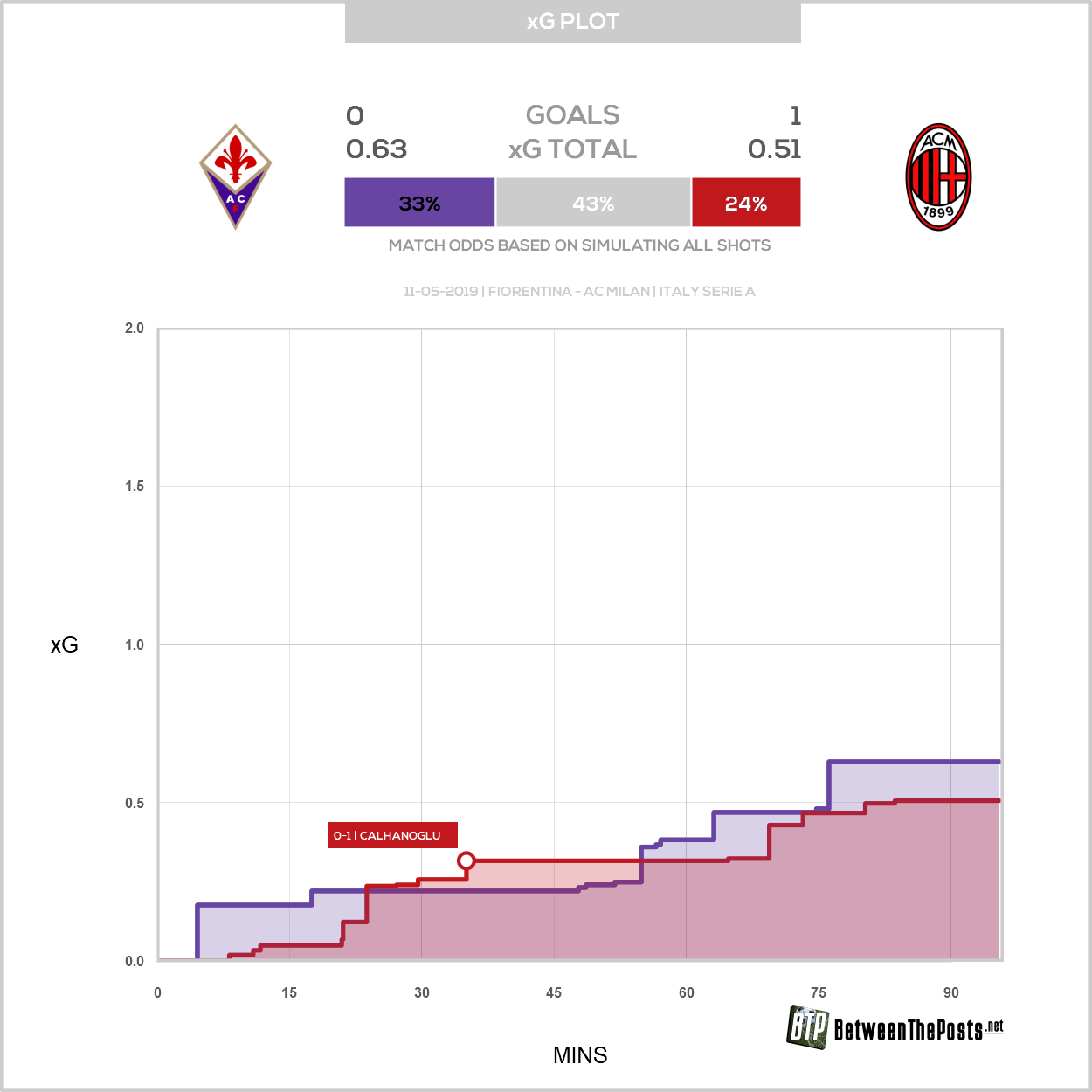 Milan certainly made hard work of this victory, but it was so important they got it, and they just about deserved it. Now back within a point of Internazionale, who play on Monday, and three points behind Atalanta BC in third, there is still plenty of hope they can yet make a top four spot.

Saying the Vincenzo Montella has a lot of work to do at Fiorentina is probably still underselling the immense task at his hands. On the basis of sheer individual talent, the building blocks seem to be in place with an abundance of young players capable of developing into their prime capacities. However, on the pitch the team lacks any form of structure and cohesion and shifting formation did not seem to provide the simple answer to this challenging problem. 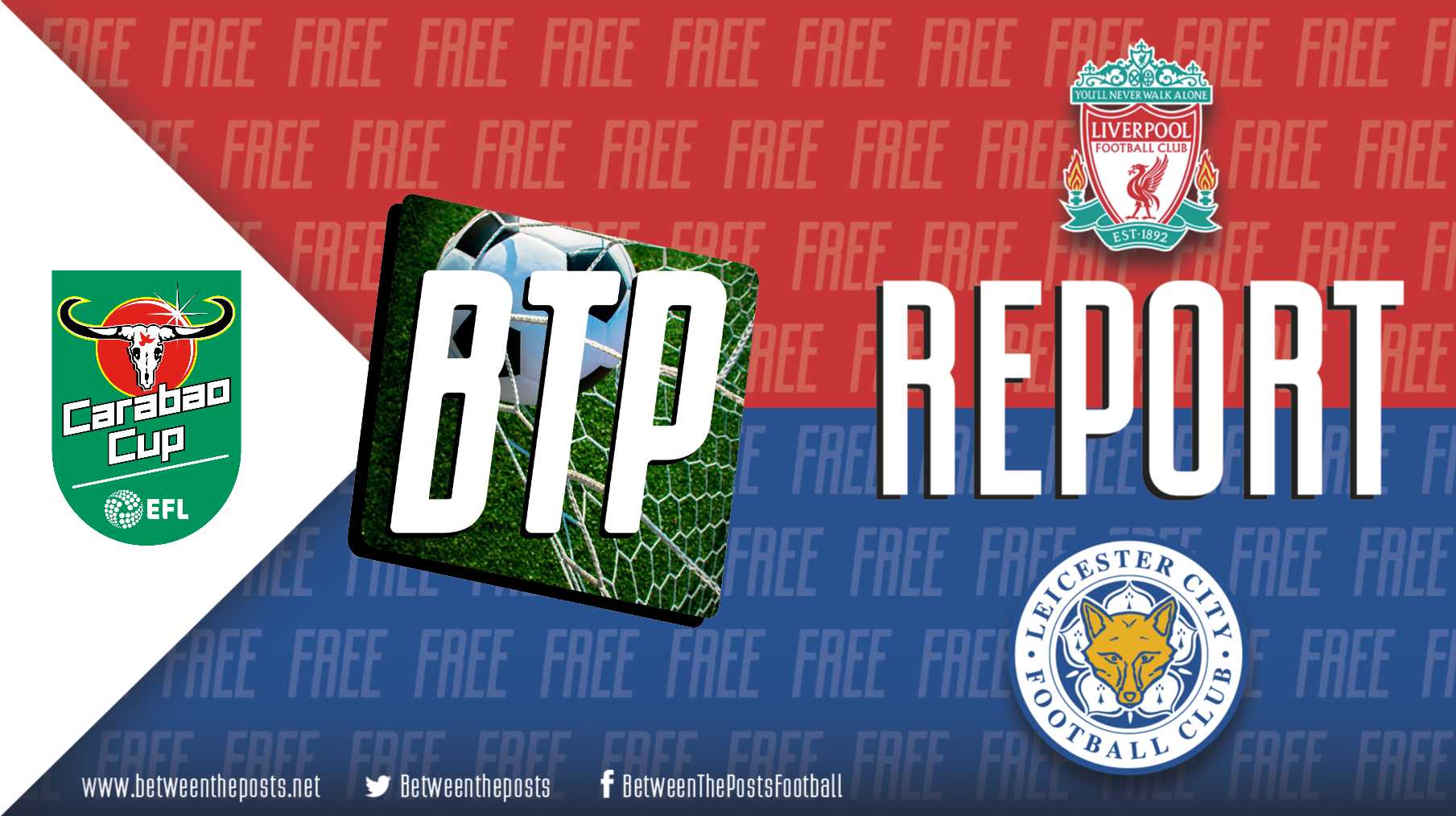 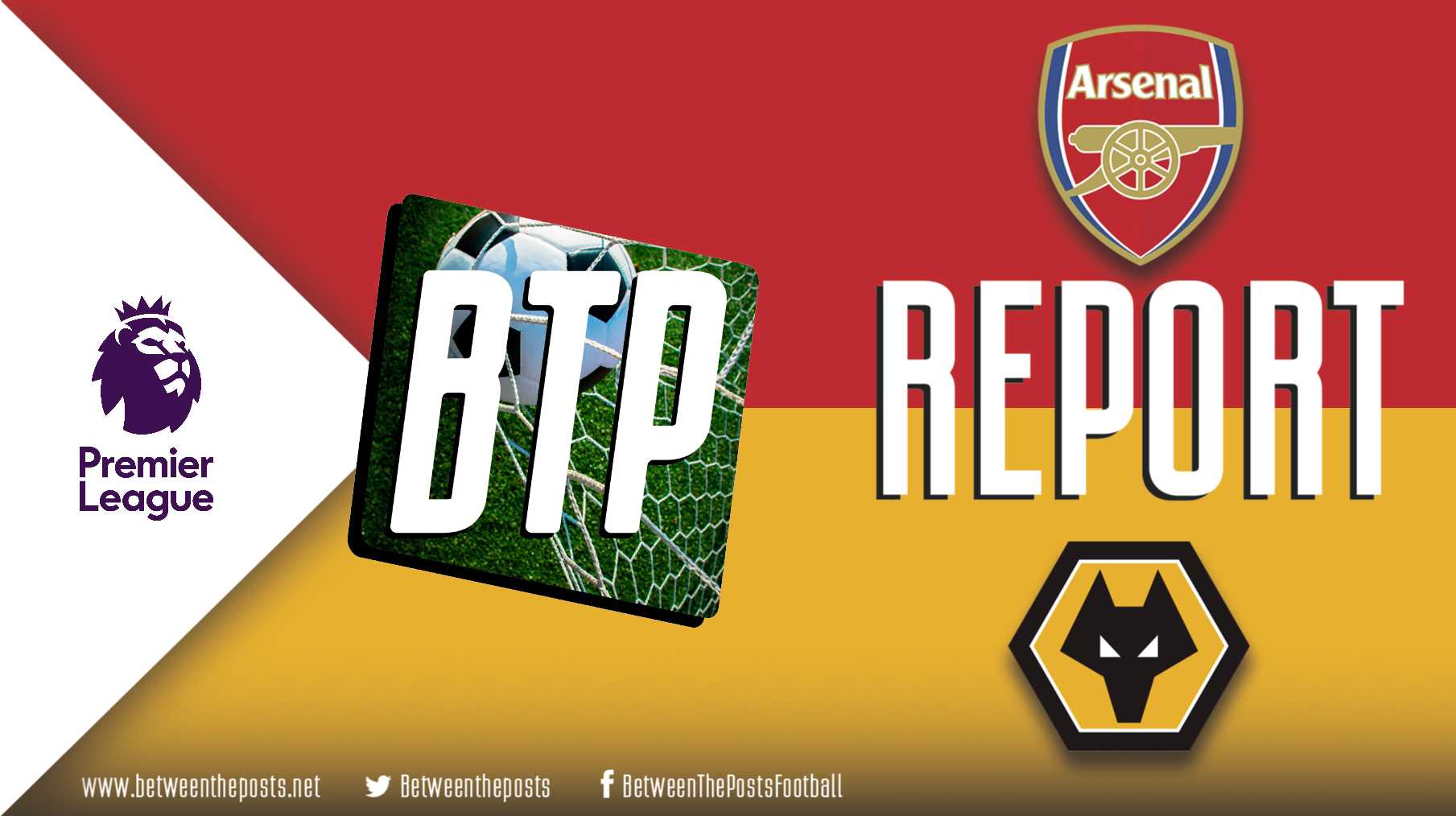