Flamengo won thanks to a ridiculous piece of skill by Gabigol, even though their game plan might have been a lot worse than what Santos had drawn up. The tactical side of this match supported a well-known thesis about Brazilian football.

Number one versus number two is always fun, in any league. However, if it’s a match between two humongous clubs from Brazil and Maracanã is the venue, it counts as a must-watch. Flamengo (first place with 39 points) hosted Santos (second place with 37 points), in a match that marked the exact halfway point of the Campeonato Brasileiro Série A.

Under the guidance of Jorge Jesus, Flamengo have toyed around a bit with a playful 4-3-1-2 formation. For this match between heavyweights, Jesus fielded a more traditional 4-2-3-1 shape. The defense is laden with experienced fullbacks, as the goal of Diego Alves is defended by Rafina and Filipe Luís, who have both returned off the back of a solid decade at Europe’s top level. Up front, striker Gabriel ‘Gabigol’ Barbosa is the eye catcher, supported by right winger Bruno Henrique (a striker by nature) and attacking midfielders Everton and Giorgian de Arrascaeta.

Santos are coached by Jorge Sampaoli, whose name has almost become a synonym for pressing. In this match, Sampaoli went for his nominal 4-3-3 formation. Compared to Flamengo, Santos have a lot less household names in their starting eleven. However their wingers Yeferson Soteldo and Marinho are up their with the best in the league, whereas the midfield trio is very apt at pressing.

Our prediction model rates Flamengo as the superior team of these two, with Santos trailing by a considerable margin. Palmeiras are rated above Santos as well, meaning that if Santos had a serious title chase in mind, now was the time to shine.

Flamengo like to play out from the back, and Santos like to press, meaning we were treated to one of those great clashes of style. From their 4-2-3-1 base shape, Flamengo built up with some of the standard tactical mechanisms that are common in the modern game.

Either Arão would drop in between the center-backs to create a two plus one buildup structure, or one of the fullbacks – most often Rafinha – would become the third center-back, while the other fullback pushed up. The last variant was the fullbacks pushing up both very high and wide, in order to create a lot of space for both holding midfielders to play in.

Santos pressed against this, and often did so very aggressively, with their three attackers and two most advanced midfielders pushing up in an attempt to limit Flamengo to playing on one side. This left defensive midfielder Alison behind to provide cover. 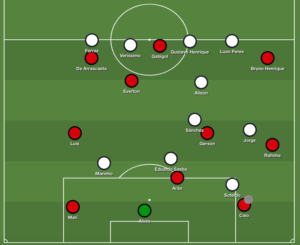 Seventh minute: Santos presses by tilting to the left side of the field. The left midfielder takes care of the right fullback.

Now, in the situation depicted in the image above, Flamengo were able to play through the press, but more often than not, they attempted long balls. This meant the second ball was crucial, which was often picked up by Santos.

Sampaoli’s side were therefore able to take control of the match and produced the first genuine scoring chance of the game, which came after seven minutes, after a turnover in early buildup by Felipe Luis.

Flamengo’s press was lackluster, as they formed a 4-4-2 shape off the ball with big distances between the attackers and midfielders. However, Santos did not keep their composure, and tried long and direct passes. Even when there were acres of space in midfield to play passes into, they preferred to look for a direct ball to their attackers. 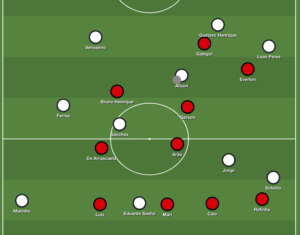 Twenty-fourth minute: Incoherent pressing by Flamengo opens up the left halfspace If you divide the field in five vertical lanes, the halfspaces are the lanes that are not on the wing and not in the center. Because there is no touchline like on the wing, players have the freedom to go everywhere. But this zone often is not as well-defended as the very center. This makes it a very valuable offensive zone to play in and a lot of chances are created by passes or dribbles from the halfspace. , which could have been reached through short passing. Instead, a long ball to Marinho ensues.

The first half of this match, therefore, can be seen as another example of a well-known football thesis. Brazil’s top teams can go toe-to-toe with most clubs from Europe’s top five leagues in terms of technical quality and physical condition, but the tactical side is a lot less developed, even with managers like Sampaoli and Jesus along the touchline.

As can be expected of a direct, end-to-end game between the number one and number two clubs of a South American league, the match turned sour and a lot of hard fouls started raining in. This type of match suited Santos more than Flamengo and, as a result, Jesus’ team registered only one shot from inside the box in the entire first half.

You don’t need to shoot from inside the box if you have Gabigol, though. Two minutes before half-time, he performed a scandalous piece of skill to put together the opening goal of the match. It should be noted that it came off a counterattack, as Flamengo very rarely reached the final third The one-third of the pitch that is closest to the opposition’s goal. through their patient, short passing strategy from the back. Everton launched Gabigol, who dribbled, acted as if he would pass a ball to one of his teammates, and then chipped the ball over the goalkeeper from twenty yards out.

Second half: a huge letdown

The second half as a whole was a lot less fun than the first. Before the break, Flamengo saw nearly sixty percent of the ball, and the aforementioned dynamics of a possession-oriented team going up against a pressing team were very interesting to watch.

Following an initial spell of Flamengo pressing that lasted fifteen minutes after the break, we got to see one team that played very defensively (Flamengo) versus one team that has a very hard time breaking through a very defensive team (Santos). That’s generally not a very entertaining game pattern.

The attacking game plan by Santos in the second half was, in one sentence, “give the ball to Soteldo or Marinho and let’s see what happens.” Now, those two are quality wingers, but to be put in a one-versus-two situation nearly every time you touch the ball in the final third is a hard situation for any winger. Therefore, one of the tasks at hand for Sampaoli is to improve his side’s positional play; to move the opponent around in order to create good one-versus-one opportunities for his wingers.

The most common ways attacks broke up for Santos were indeed on the flanks, when the fullbacks made unorchestrated overlapping When a wide player, most of the times a wing-back, runs outside to fill in the space left by a winger going inside with or without the ball, this is called overlapping. runs, that seemed to always be out of sync with the winger in possession. Also, it is hard to play against a team that has counterattacking prowess in Bruno Henrique, Gabigol, Everton, and De Arrascaeta. As the two central midfielders started pushing up more, Flamengo started to become more dangerous in transition.

Despite having over sixty percent possession in the second half, Santos only mustered three shots when they needed to score. Since Flamengo did not kill the game off, one would have expected an all-or-nothing plan from Santos for the last ten minutes in order to score an equalizer. That, surprisingly, did not happen. 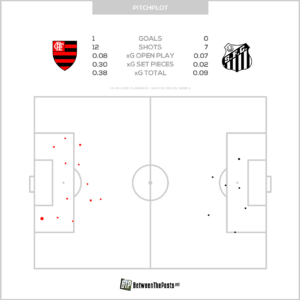 A very uneventful game, all in all. Lucky for us tactics fan, we always have something to focus on, even when there is not a lot of penalty area action.

This could really be Flamengo’s year, as they now carry a three-point lead over Palmeiras in the league and are still in the Copa Libertadores, where they will have to face Grêmio in the semi-final. In this match, they showed a tactical flexibility that might define their season later on, as they grinded out a 1-0 win. The last time they won the league was in 2009, the last Copa Libertadores trophy came in 1981. This team is definitely one to watch in the coming months.

As for Santos, it is a commendable achievement for Sampaoli if he finishes third with this set of players. His pressing style is rare in Brazil, meaning having him as a manager is an addition to the league from a tactical point of view. Whether he gets the time to put his ideas and football principles into place is always a question – especially in Brazil – yet it would be intriguing to see where a pressing and possession-oriented team could end up in the modern day Série A. 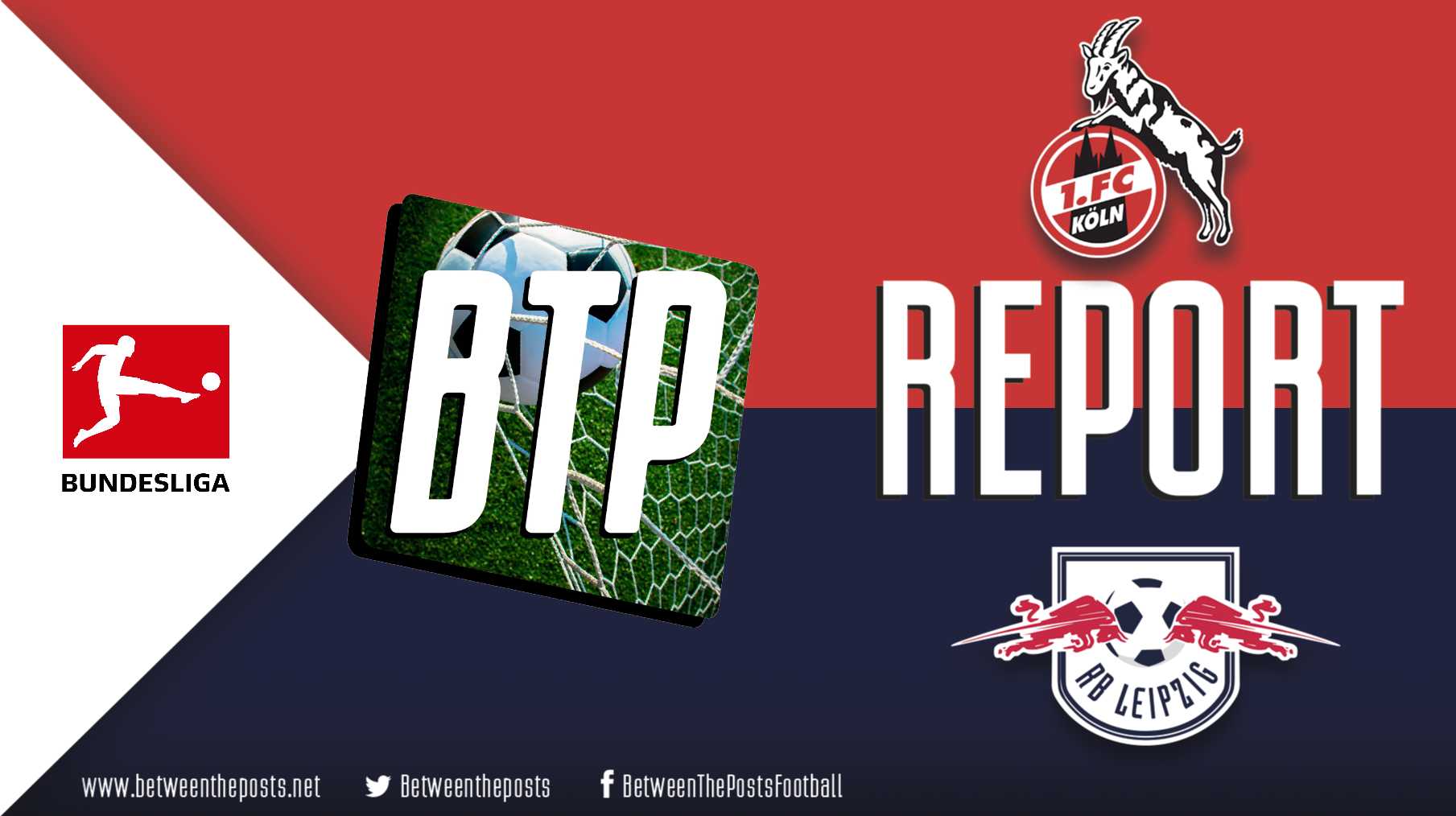 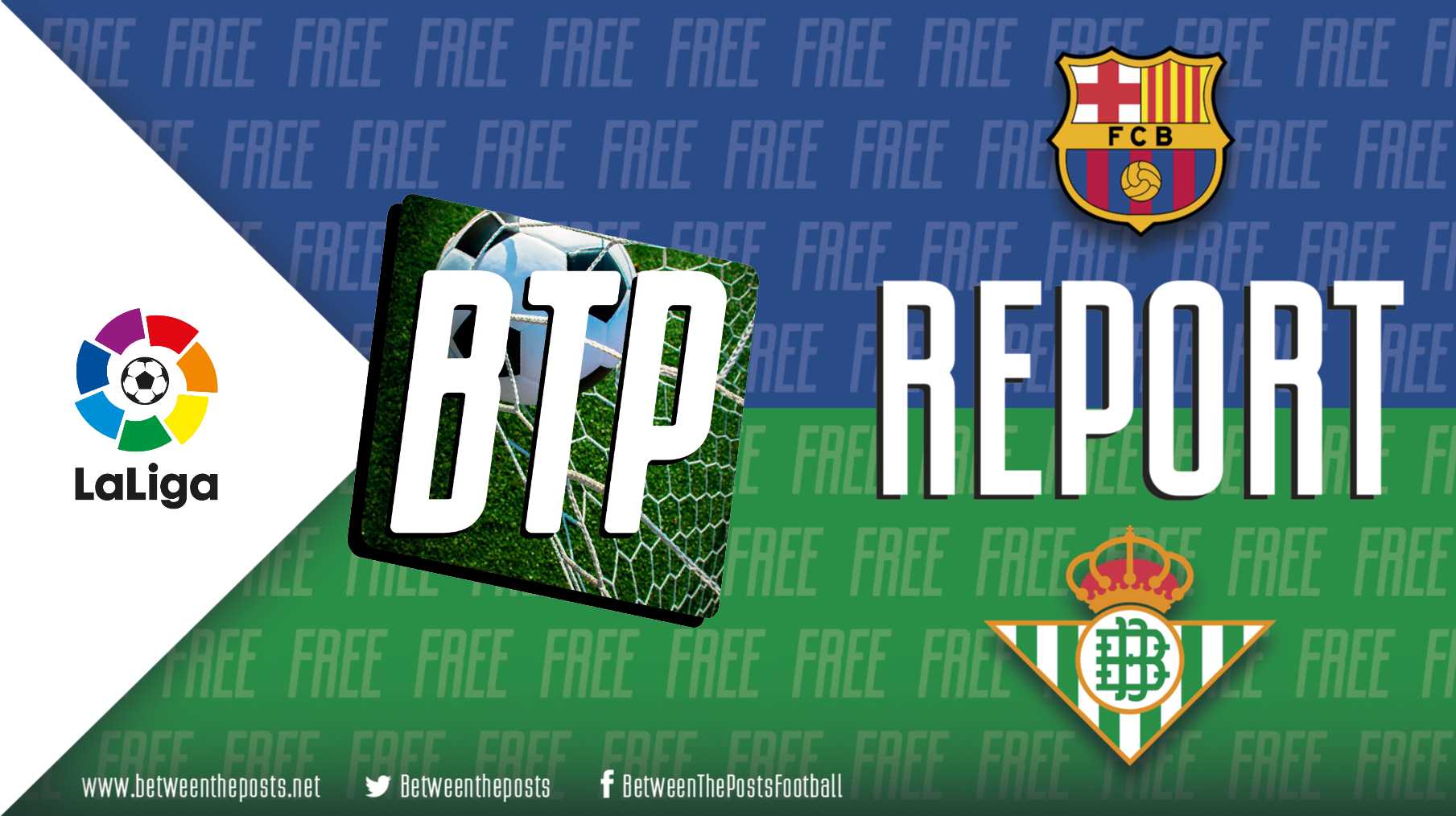