Preceding the chaos of the second half was a contest tightly-fought by two differing systems – one demonstrating alternative components of a 4-3-3 setup and the other displaying unique structures in a narrow 4-2-2-2 shape. Paranaense’s innovative attacking moves trumped the home side’s but it was not enough to avoid defeat.

After suffering a 2-1 defeat away to Atlético Mineiro last weekend, under-pressure Flamengo manager Abel Braga proposed three changes to the starting eleven. Léo Duarte’s spot in the center of defense was taken up by Matheus Thuler and in midfield, both Gustavo Cuéllar and Giorgian De Arrascaeta were dropped for Diego and Robert Piris.

Having to cope with a Recopa Sudamericana tie either side of this match against River Plate saw Athletico Paranaense manager Tiago Nunes make a whopping eight changes. The only mainstays from the side that edged out the Argentinians in midweek were goalkeeper Santos, center-back Léo Pereira and holding midfielder Wellington.

Against an aggressive 4-4-2 press from their opponents, Flamengo’s movement and tempo had to be sharp.

Most often, the home side would build their attacks down the left, involving Diego quite heavily. As one of the more advanced central midfielders in the 4-3-3 system, he would push wide to the touchline to receive from the fullback. Instead of Bruno Henrique doing this, as one might have expected, the winger would instead rotate inside to exploit the channel opened by this chain movement. Once Diego had returned the ball to the running fullback, he could then feed it into Henrique through the channel which had been drawn open by Diego’s movement.

From here, it would be quickly zapped across to the underloaded right side, in order to create a more dangerous attack, which ultimately failed to amount to much.

This tactic also created an opening early on higher up the pitch. As Renê received the ball deep and narrow, it encouraged a press from the opposing wide midfielder. In tandem with this was Diego’s movement to the flank, that drew out Madson. This left a huge gap down the left halfspace, If you divide the field in five vertical lanes, the halfspaces are the lanes that are not on the wing and not in the center. Because there is no touchline like on the wing, players have freedom to go everywhere. But this zone often is not as well-defended as the very center. This makes it a very valuable offensive zone to play in and a lot of chances are created by passes or dribbles from the halfspace. which the left-back used to feed it directly into the feet of Henrique. The winger controlled the ball and beat his man to deliver a cutback, although it was blocked. 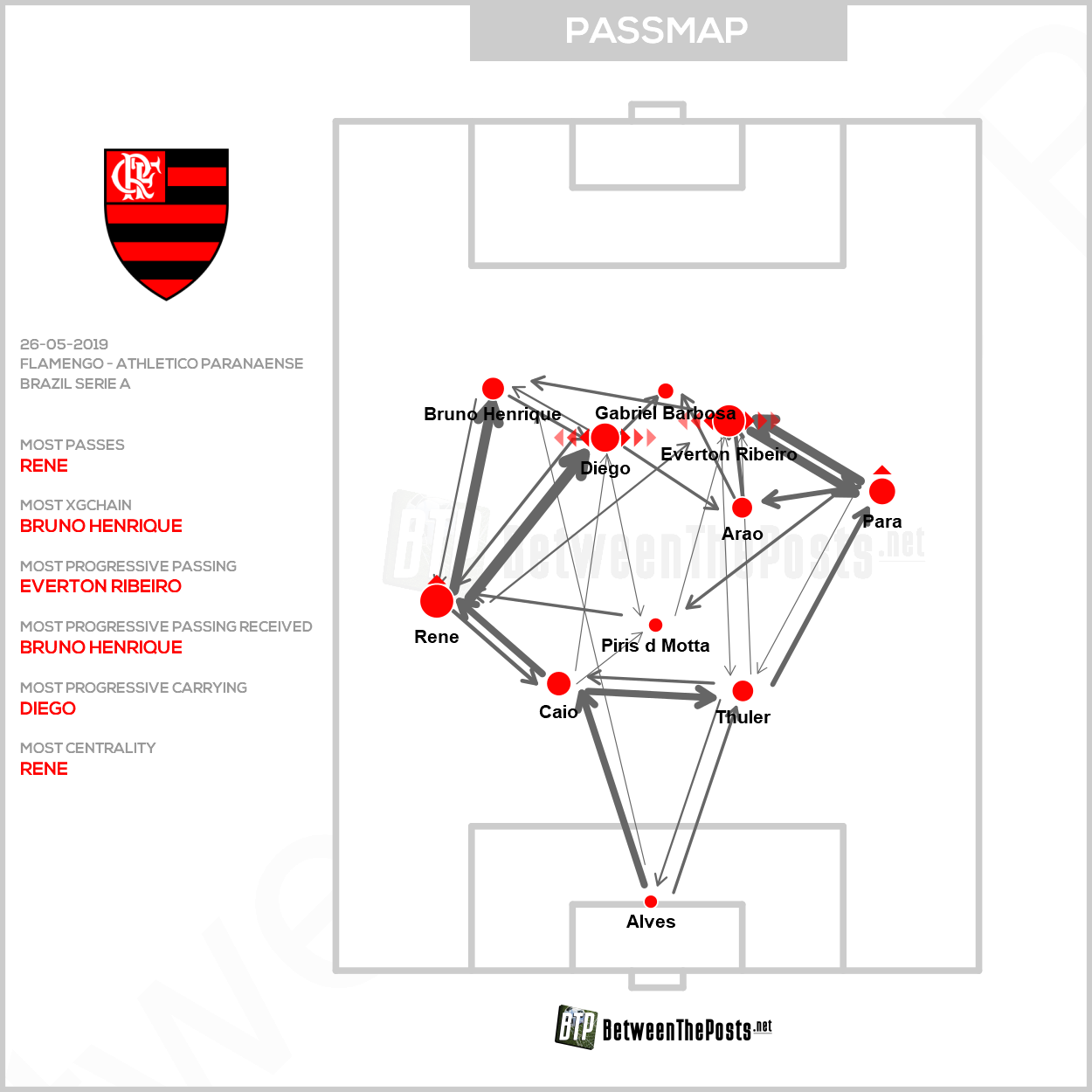 Paranaense’s costly struggles on the ball

Paranaense were not quite successful in their buildup attempts to begin with, but they showcased some interesting ideas. There was certainly a huge amount of fluidity to each players’ positions outside of Cirino up front and Wellington in deep midfield. The rest occupied positions that constructed a very narrow 2-2-2 setup.

The reason why it struggled was due to the areas they played in. In the initial phase, deep ball-holders were attempting one too many chipped balls into Márcio Azevedo’s feet, which were proving difficult to control under spatial restrictions. And, on the opposite right side, where a lot of their attacking play occurred, they were trying to play too short and horizontal.

With so many players supporting the ball, it was a surprise that they were not creating better angles for Madson. Instead, most of the options being created were very flat, very predictable and easy to intercept.

In the twenty-fifth minute, this approach proved costly. As Madson was pushed back towards the halfway line, he felt too unsure of the options inside, so he attempted a long, driven ball back to Santos which failed miserably. Gabriel Barbosa – having already clocked onto the pass and had moved up in anticipation – intercepted the under-hit ball, drove towards goal and was brought down when attempting to round the goalkeeper. VAR’s confirmation of the decision proved to be just as emphatic as the finish, which was rifled into the top corner by Gabriel himself.

Paranaense’s central attacks give them the upper hand

Paranaense’s noticeable improvement came from them beginning their attacks in the center, with Wellington even dropping between the center-backs to ensure this. As Flamengo’s wide midfielders preferred to drop back and follow the fullbacks, it tended to isolate the midfield, which was perfect for Paranaense. Now utilizing the center meant they were exchanging the ball in these small triangles and squares more consistently and to greater effect.

This was the way Paranaense created their first real chance of the match, inside first half stoppage time. As Wellington got the ball back in the center, Thonny Anderson had dropped deep and wide, exploiting the gap to the side of Flamengo’s midfield three due to Éverton Ribeiro’s deep positioning covering the switch. Thonny then cleverly drilled it diagonally through the channel between Ribeiro and Pará to send Azevedo in behind. The fullback cut it back to an unmarked Erick but his header was comfortably saved. 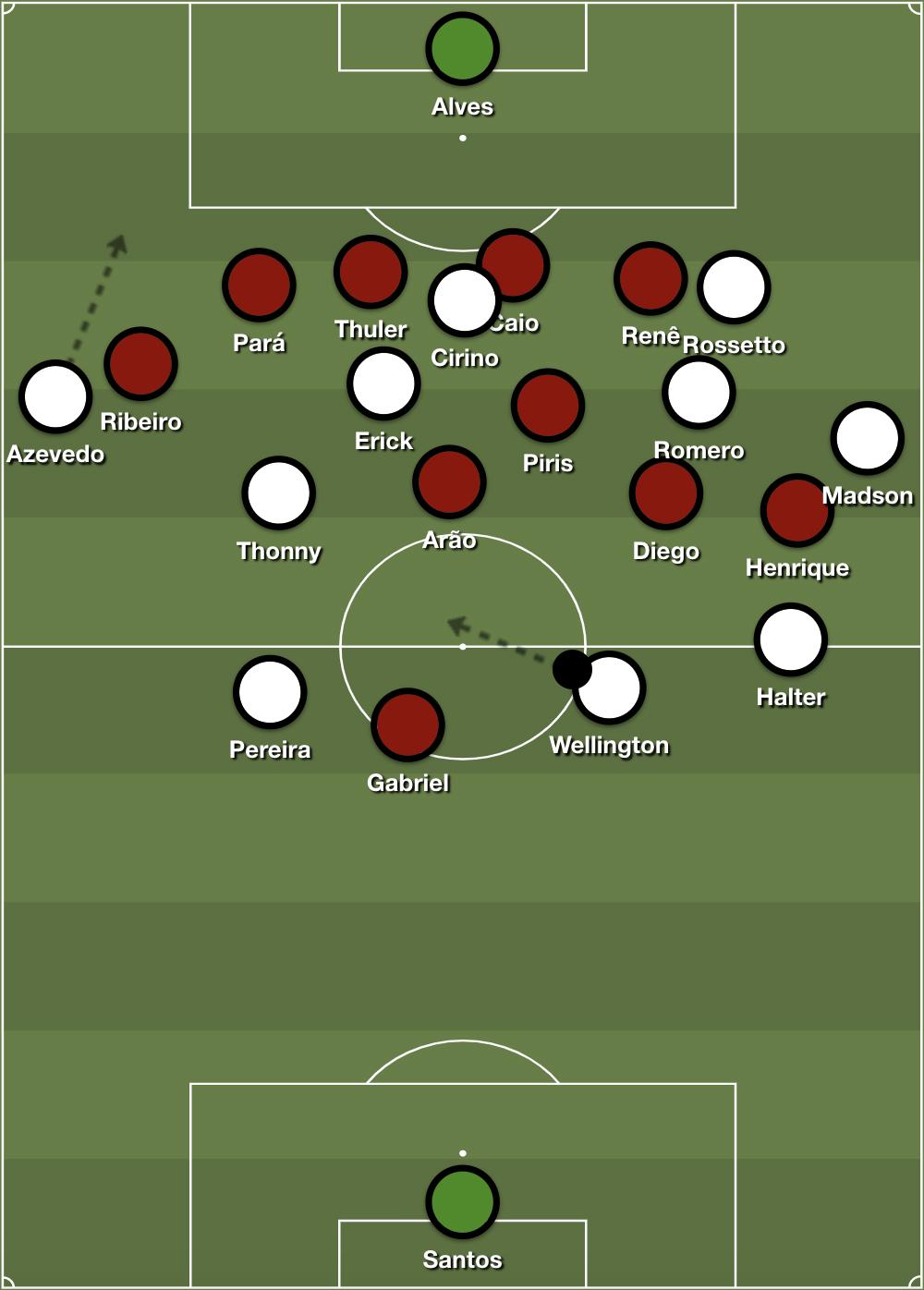 Thonny dropping deep in the left halfspace to exploit the horizontal midfield gap.

We saw a further opportunity stemming from this just after the restart. With the quadrant in place, Matheus Rossetto quickly shifted it through the lines to Romero. Anderson, the midfielder in line with Romero, having dropped close-by too, prevented Piris from moving across. Rossetto kept up with the attack as he and Romero continued their linkup to ease their way past Renê. The result was a whipped cross met by an Erick bicycle kick. Ambitious, but encouraging.

Paranaense did eventually got their just rewards. Substitute Tomás Andrade was the focal point, instigating the same sort of attack. Having dribbled past Diego, he then exchanged the ball with Erick, who had since pushed up and was now free between the lines. Romero’s narrowing run opened the lane into Madson’s overlap and, although the cross was dealt with, Paranaense recovered the ball. Immediately from it, Tomás executed the perfect give-and-go that set Romero in behind his marker – he cut it across to find Cirino for a tap-in. 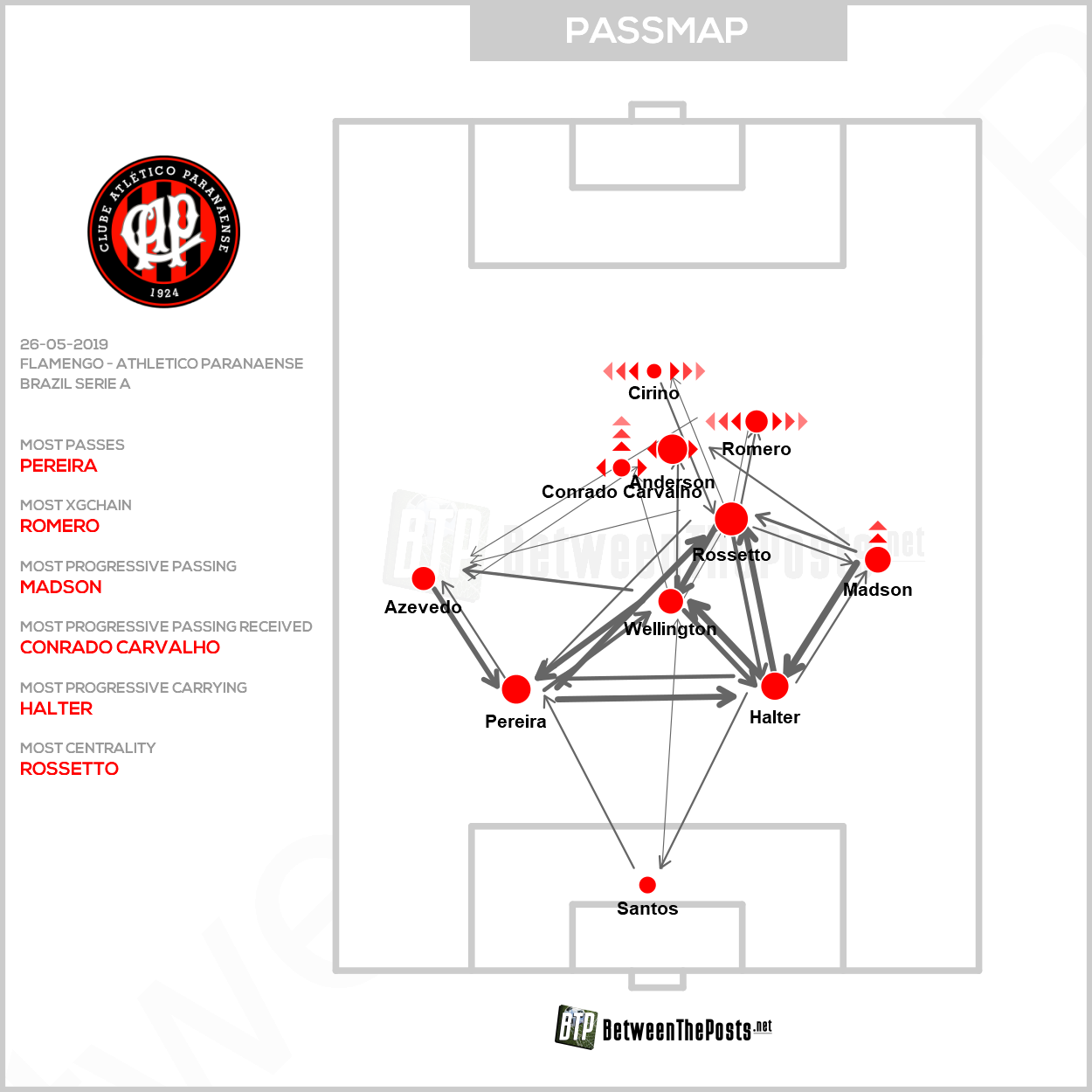 On a handful of occasions, the away sides goal kick setup appeared to be close to breaking down Flamengo’s press.

With the laws in place for players to be allowed within the box now, both center-backs and Wellington dropped in to create a back-three, whilst Thonny and Romero pushed up to complete the 3-4-3 shape. What managed to undo Flamengo’s 4-3-3 press was the overloading movement of Rossetto. The midfielder would always look to dart across to the left-ball-side, away from his marker.

He did so to great effect in the sixty-sixth minute. By the time the short exchanges had led to Azevedo, Rossetto had already shifted across to create a spare option. He cleverly knocked it past his nearest opponent and launched a dangerous attack. With the strikers then pinning back Flamengo’s retreating defensive line, he located Madson’s powering overlap on the opposite side. At the time, the lost ball was deemed as nothing more than a collision but one heavy VAR-referral later saw it change to a penalty decision. Diego Alves, penalty-stopping-extraordinaire got a strong hand to this one but it unluckily fizzed in off the backspin on it. 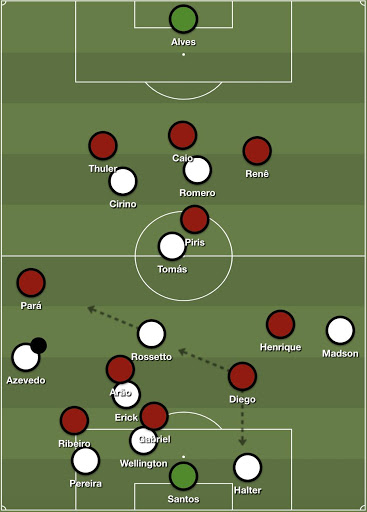 The manager soon brought on Vitinho and Rodinei, both of whom proved to be strong additions to the attack. Along with those subs came the switch to a 4-4-2 formation. This managed to stifle Paranaense’s buildup play late on as the home side’s intensity off the ball skyrocketed.

The style of play was now far more direct and fierce, with less of a focus on tame rotations and overloads, and instead about feeding it forcefully into attacking players like Vitinho.

Naturally, Paranaense bed themselves in a bit more and thus allowed Flamengo to recycle the ball more freely from side-to-side. The one danger sign was through the time and space the inverted attackers were afforded when attempting crosses. This proved to be costly as one of the more ingrained wide rotations resulted in the two covering Paranaense defenders lose track of Ribeiro. His wicked in-swinger passed everybody bar Henrique at the back-post.

The visitors even had a chance fall their way via a long kick from Santos following a Flamengo cross, which was taken down by Cirino. He quickly picked out Romero, who was free and through in the center but the attacker could not keep his cool and wasted a pivotal moment.

Then, with fewer than two minutes to go, on the second phase of a corner, Caio delivered all three points off of a deep cross, curled beautifully towards the center and met by his bullet of a header back across goal and into the bottom corner. 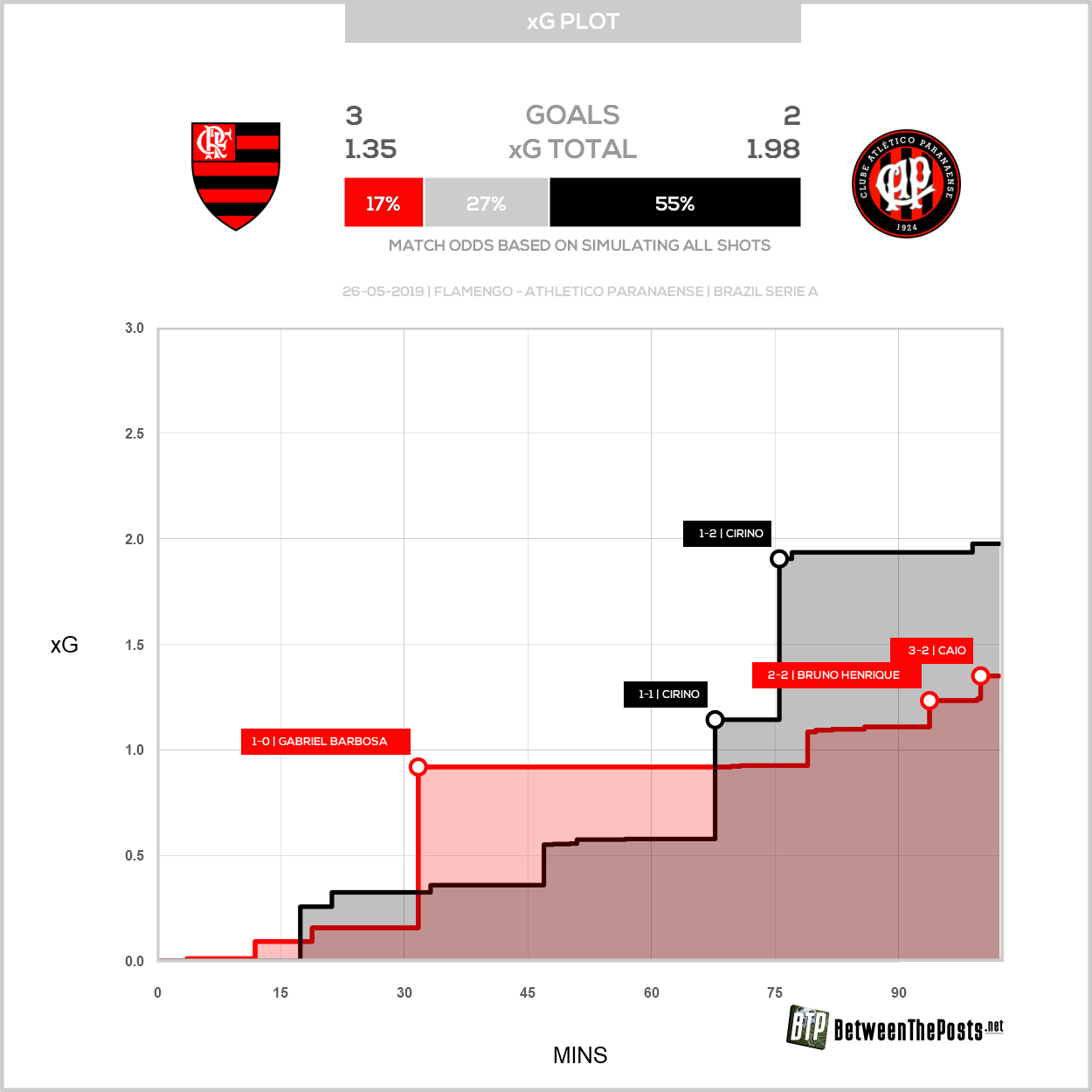 Utter despair for Paranaense should not detract from a great performance, that suffered a late comeback well against the run of play, and in undeserved fashion. Tiago Nunes’ decision to freshen up the whole side injected them with newfound energy that lasted throughout the match and almost paid off, but now they must focus on the return leg against River Plate.

On the other side of the result, Flamengo’s win saw them push into the top six, now just two points off second-placed Atlético Mineiro, who they lost to just last week. 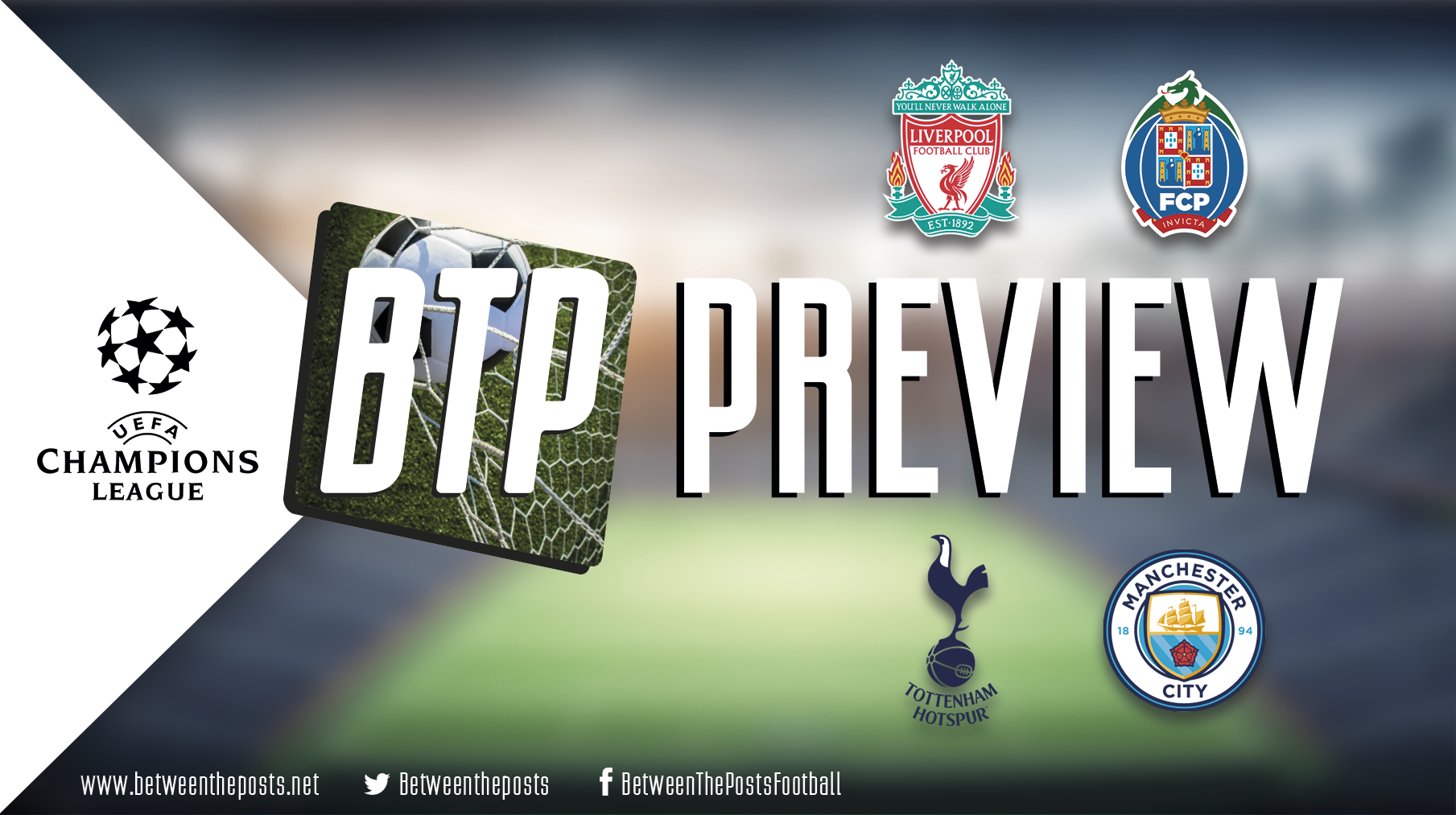