Flamengo – Corinthians: Flamengo Close In On Title After Convincing Win Over Corinthians (4-1)

Flamengo began as the dominant side, but waned as the half progressed. However, thanks to Bruno Henrique’s brace in injury time, they carried a 2-0 lead into the break. The striker scored his third of the game just after the second half kicked off and, although Corinthians scored a few minutes later, the hosts recovered their form and were the better side for the remainder of the game – going so far as to add a fourth goal.

With nine games to go in the Brasileiro, Flamengo lead the table – eight points clear of second placed Palmeiras. However, their lead shrunk from ten points after their seven-match winning streak was snapped by a draw against Goiás last week. Manager, Jorge Jesus, made five changes to his starting eleven, as Rafinha and Renê, two new fullbacks, came into the team. In midfield, Gerson replaced Robert Piris. Striker Gabriel Barbosa missed out on the squad and in his place, Reinier started next to Bruno Henrique in a 4-4-2 formation. Moreover, the suspended goalkeeper César was replaced by Diego Alves.

Things are much more dire for Corinthians, who have gone seven straight matches without a win. As a result, the team has dropped out of the Copa Libertadores places and sits in seventh position. In what later turned out to be his final game as Corinthians manager, Fábio Carille made three changes to his team: switching from the 4-1-4-1 shape he employed in the previous match to a 4-4-2 formation. In center-back Bruno Méndez and left fullback Carlos Augusto, two new faces were added to the back-four. In addition, Ramiro came in as the right midfielder.

Flamengo look for openings with wing-play

Against Corinthians’ 4-4-2 formation in a low block, A low block refers to a team that retreats deep in their own half out of possession, generally only disrupting their opponents around their own box. Flamengo looked for spaces on the wings to advance the ball. Therefore, they used a lot of switches in possession from one wing to the other and patiently waited for spaces to open up. After that happened, they created triangles on the wing and looked for combinations between the lines. However, they did not manage to advance the ball into the box and many attacks ended with crosses. Although they had the numbers in the box, the movement of the strikers and the quality of the crosses were not good enough to create chances.

After fifteen minutes, Corinthians began to show improvement defensively. Although they had remained compact in central areas, their biggest concerns were the spaces Flamengo were creating on the wings through their constant switches of play. A pass from one side to the other.

After a quarter of an hour and with their new-found defensive solidity, Corinthians began to enjoy longer spells of possession. Flamengo’s uncoordinated pressing allowed the home side to find spaces in the center of the pitch to give the ball to one of their defensive midfielders. After probing one side, Corinthians looked to hit diagonal balls to the opposite wing. Although these passes were completed, these attacks failed to create any real chances.

After failing to produce anything through their nuanced switching, Corinthians reverted to long balls from their center-backs into their striker Gustavo. This strategy was unsuccessful, as they were unable to win the second balls produced by Gustavo’s aerial duels. Fortunately for the visitors, Flamengo’s bid to turn their recovery of the second balls into fast attacks was largely unsuccessful – a consequence of inaccurate passing. As a result, neither team was able to create scoring chances. 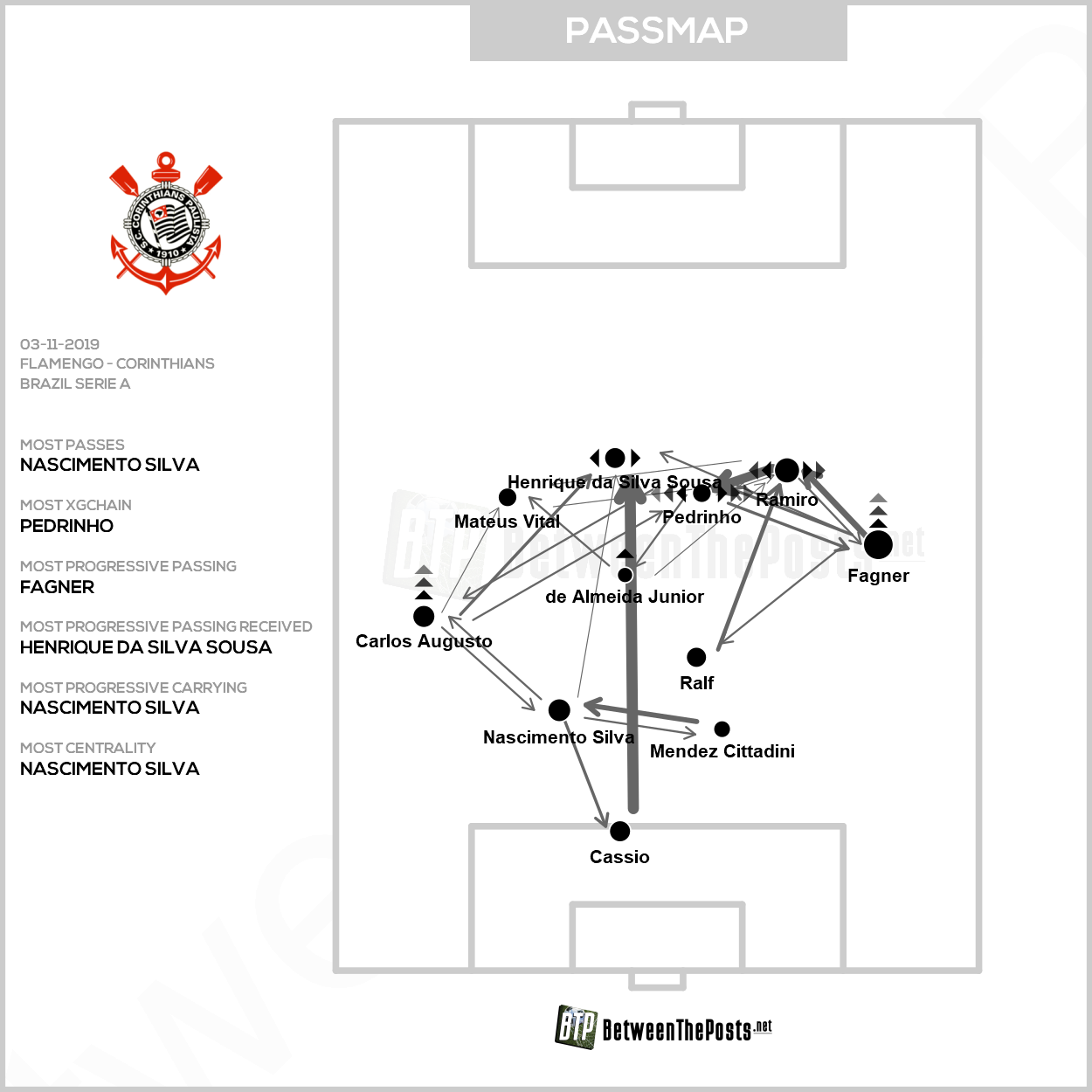 Corinthians relied on long balls to their striker Gustavo, but failed to win the second balls.

As the first half was coming to an end, Flamengo began to grow more confident. They no longer looked for fast attacks, but instead aimed to switch the ball from wing to wing in order to open up the Corinthians defense. They were rewarded just before half-time, as Henrique managed to notch two goals in injury time. The first goal came when Flamengo switched the ball from right to left and earned a penalty. The shot was saved by Cássio, but Henrique scored the rebound.

Just one minute later, one of Corinthians’ rare pressing situations was exploited by a nice bit of dribbling from Gerson, who then played a through ball – sending Henrique in on a one-versus-one against the goalkeeper and the striker scored his second goal. 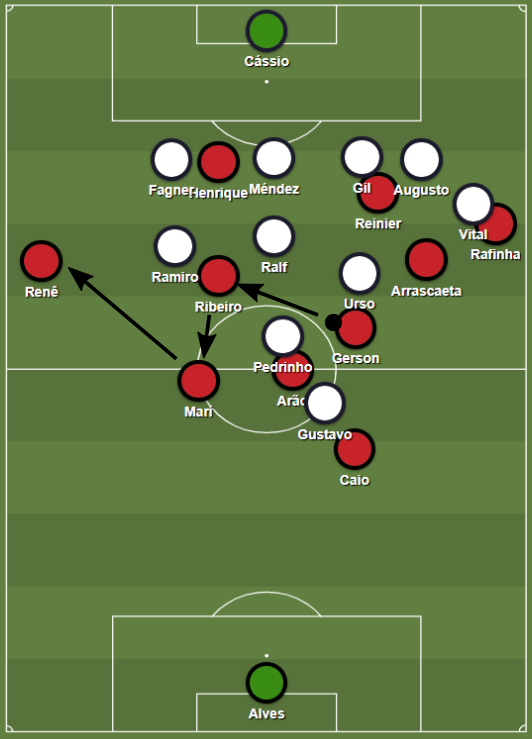 For the first goal, Flamengo attracted Corinthians to their right side and switched the ball to the open left wing.

Corinthians likely hoped to score a quick goal to start the second half in order to jumpstart a comeback. However, this plan was thwarted by Henrique, as a mere twenty seconds after kickoff, the striker completed his hat-trick.

Fábio Carille instructed his side to press higher in the second half, but the pressing was too incompact and easily exposed by Flamengo’s sound buildup. To outplay the pressing, Flamengo used a 3-3-3-1 shape with William Arão dropping between the center-backs. Gerson played as the only defensive midfielder and created a diamond with the defenders. In front of him, the wide midfielders moved inside to occupy the halfspaces If you divide the field in five vertical lanes, the halfspaces are the lanes that are not on the wing and not in the center. Because there is no touchline like on the wing, players have the freedom to go everywhere. But this zone often is not as well-defended as the very center. This makes it a very valuable offensive zone to play in and a lot of chances are created by passes or dribbles from the halfspace. and open the wings for the fullbacks. De Arrascaeta, who played as the number ten in the second half, occupied the space between Corinthians’ two central midfielders. With their diamond in buildup, Jorge Jesus’ side passed until they found the free man to advance play. The Corinthians wingers had issues in their positioning and timing of movements, meaning the wings were open and easily exploited by the Flamengo fullbacks. 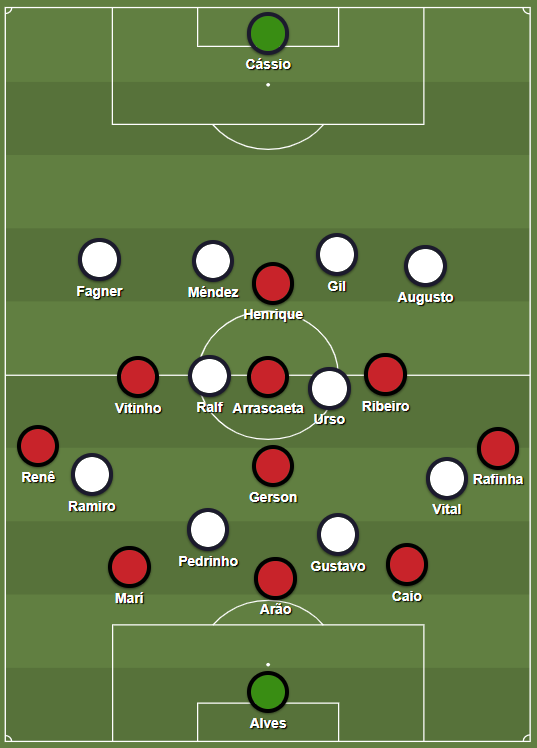 Against Corinthians’ press, Arão dropped back between the center-backs. In their 3-3-3-1 formation, Flamengo could either advance through the wings, or halfspaces.

Surprisingly, Corinthians scored in the 53rd minute through a crossed ball to the far post, where the visitors had a numerical advantage and it was eventually turned in by Mateus Vital. After the goal, the quality of the game ebbed once again. Corinthians relying heavily on long balls, but were still unable to win the all-important second ball.

Owning a comfortable two-goal lead, Flamengo’s passing became much more inaccurate. Despite this, the hosts were still able to add to their lead in the 67th minute, after Vitinho received the ball between the lines, turned and buried a shot from distance .

Buoyed by Vintinho’s goal, Flamengo rediscovered their good buildup structure and were able to dominate the Corinthians medium block A medium block refers to a team that retreats in their own half out of possession, generally only disrupting their opponents some way into their own half. for the rest of the game. Crucial to their dominant possession game was the occupation of the wings. Often, the midfielders looked for spaces in the center and opened the wings for the fullbacks. They positioned themselves behind Corinthians’ midfield line in order to receive the ball and advance. Flamengo also looked to vary their access to the wings by progressing through the halfspaces.

With Corinthians’ pressing becoming more and more scattered, Flamengo circulated the ball a lot and advanced up until the box, but their intensity in attack decreased with a three-goal lead. In the end, the victory was never in danger and Flamengo returned to winning ways. 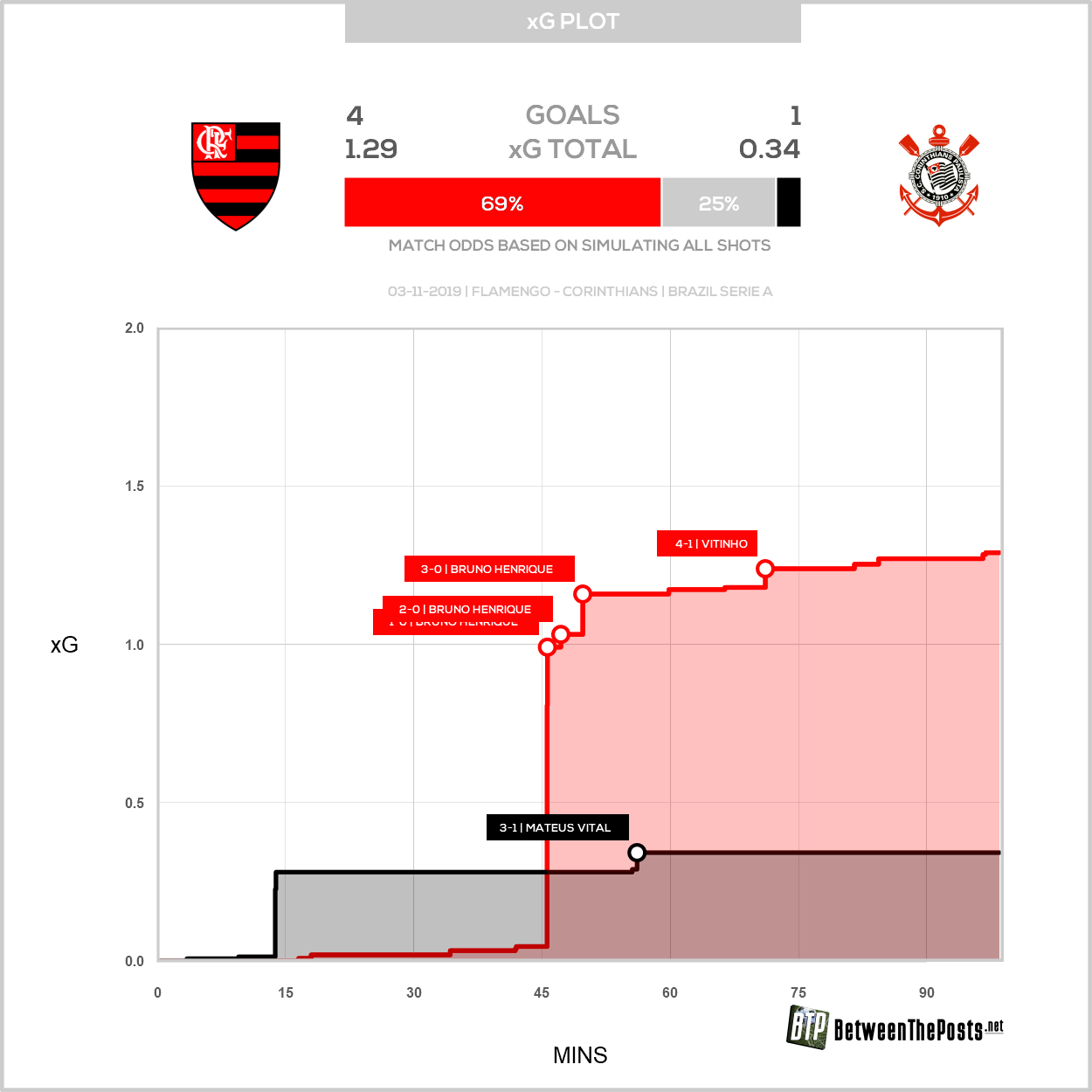 Flamengo dominated the game from the first minute on and created a lot of problems for their opponents with a good positional game and a lot of switches to open up the wings. After failing to get into the box in the beginning of the game, the quality of the attacks increased at the end of the first half.

After a dominant second half, Jorge Jesus’ side won convincingly, expanding their twenty-one-game unbeaten streak.  With eight games to go and an eight-point lead, nothing can stop Flamengo on their way to the title if they continue to turn in these types of performances.

On the other side, Corinthians are now winless in eight games and fall back to eighth place in the table. The gap between them, fourth place and direct qualification to the Copa Libertadores, is now seven points. Shortly after the match, word came out that Fábio Carille is no longer manager of Corinthians. For the 2017 Brasileiro champions, this means they have a lot of work to do to qualify for the continent’s most prestigious competition. For the league as a whole this means that there are only three teams left that have not waved goodbye to their manager at least once at some point during this crazy Brasileiro season. 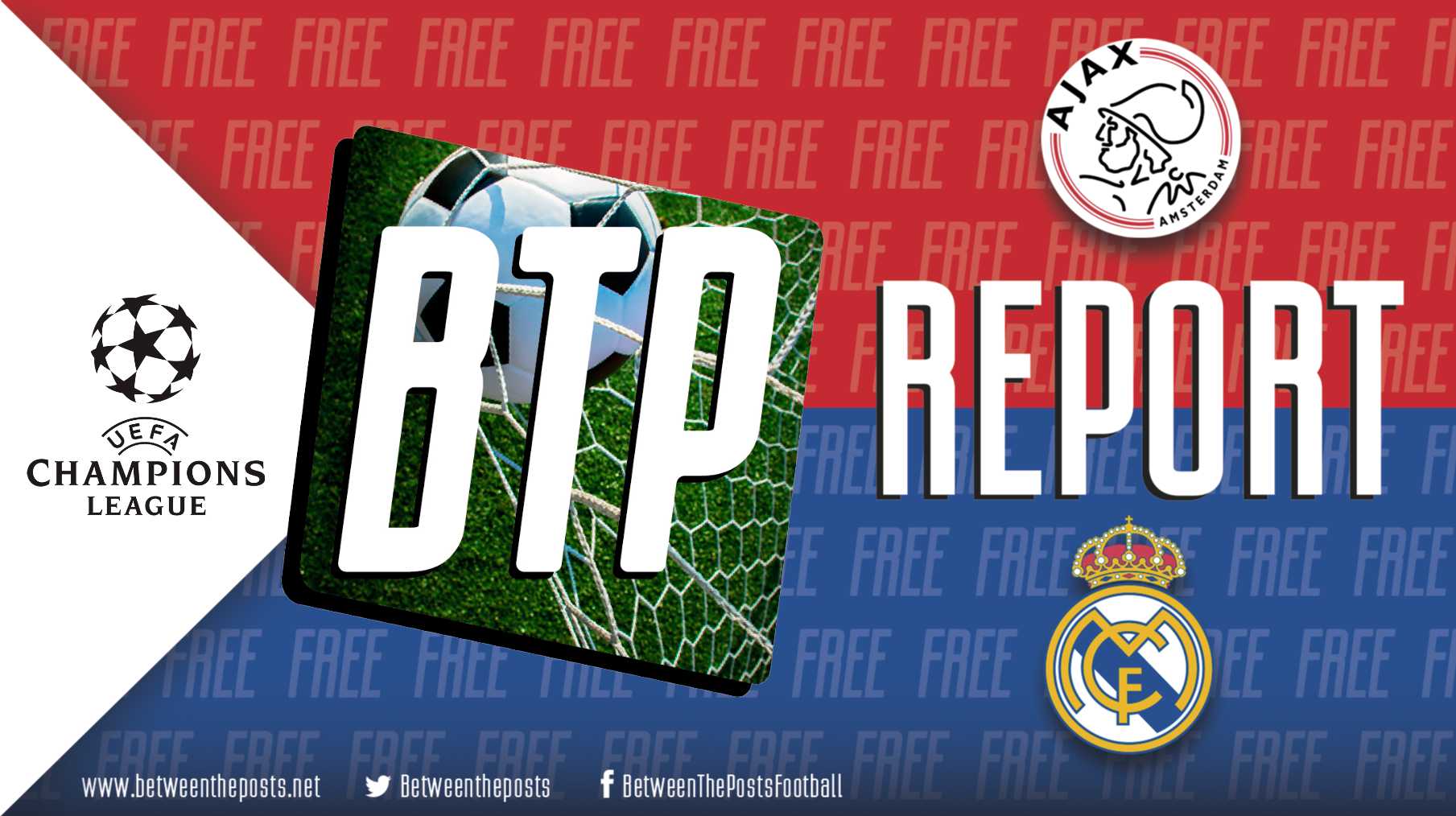 Ajax – Real Madrid: Madrid Ride Their Luck To Pick Up Crucial Away Win (1-2)