More fouls than one could count and a last minute winner. This game started slow but all it took was a tropical storm to open it right up. Sloppy defending from a late set piece saw Rodrigo Caio free at the back post, as the central defender put the tie to bed. Flamengo went through to the quarter-final and they will find out who they face on Monday.

Wednesday’s Copa do Brasil Round of 16 tie saw an in-form Flamengo side pitted against Corinthians. This round was a two-legged tie, adding to the grueling schedule the Brazilian teams have to undergo. It would be the home side that took a 1-0 lead coming into the game at the Maracanã stadium. Flamengo made two changes from the first leg: Robert Piris da Motta came in for Gustavo Cuéllar in the center of midfield. Giorgian de Arrascaeta made way for veteran playmaker Diego in the number ten role.

Wholesale changes in both side and shape gave Corinthians a different look coming into this game. Whilst a 4-2-3-1 formation was used in the first leg, manager Fábio Carille opted for a more restricted 4-1-4-1 shape, with veteran midfielder Ralf anchoring the midfield. Vágner Love operated as a lone striker. He would have a tough task coming up against Flamengo central defenders Léo Duarte and Rodrigo Caio. Caio particularly has been at the peak of his game recently, having been linked to FC Barcelona in the past.

The opening ten minutes of this encounter were surprisingly unremarkable. Elongated spells of possession from Flamengo settled the game down early and Corinthians’ only form of resistance was a press when the ball entered the middle third of the pitch. Although this slowed Flamengo’s buildup down, the lack of running in Ralf’s legs left constant holes in behind for Diego to exploit, but the former Brazilian international was unable to pick his passes. 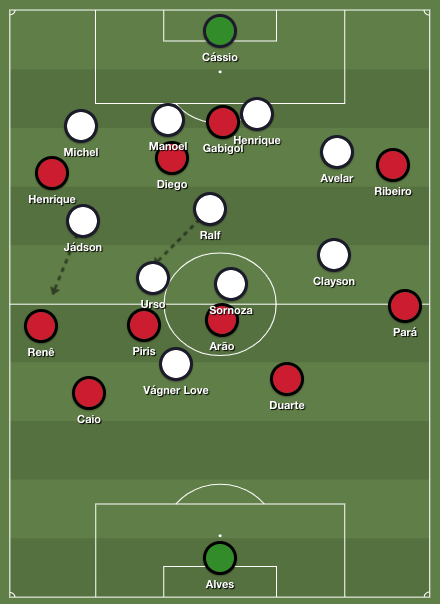 Ball at the feet of Renê. The middle third press was all Corinthians had to offer defensively.

Flamengo’s double pivot 4-2-3-1 is one of the most frequently occurring formations in football. The two most defensive midfielders are called a ‘double pivot’. of Piris da Motta and Willian Arão was rather uninspiring going forward; Diego and Gabigol often ended up collecting the ball from the deep. Flamengo were incredibly patient and both sides’ attacking output was severely limited. The large Corinthians contingent in the corner of the Maracanã had to wait thirty-four minutes before their side had a first shot on goal. It came after some clever footwork from left winger Clayson bought a foul thirty yards out on the left hand side.

Junior Sornoza’s curling cross found the head of left back Danilo Avelar, who glanced it towards the far corner. Diego Alves was on hand to make a diving save but it was a small glimmer of hope for a Corinthians side that had barely seen the ball in the first half. Flamengo themselves only created one real chance: a back stick cross found Éverton Ribeiro, but his tame header was saved comfortably by Cássio. Half time. Intense, but scrappy and in front of goal it was uninspiring to say the least.

Corinthians step up the tempo but unable to find a breakthrough

Straight away at the start of the second half, it was clear Corinthians were going to commit more players forward, stepping up the tempo in an attempt to catch Flamengo off guard. It did. It was clear that Carille had asked fullbacks Avelar and Michel to underlap and support the wide players; just ten minutes into the second half, this caused issues.

A ball chipped into the onrushing Michel allowed the right back to play a first time ball across to striker Vágner Love. Love’s clever turn allowed a shot on his favored left foot, but the powerful strike was denied by Alves.

Sixty minutes in and the match finally began to feel like a cup tie, the game opening up and chances coming at both ends. Bruno Henrique – now playing as left winger after starting the season as striker – headed a ball on the post, whilst Love blazed it over the bar. The Corinthians lone striker was casting a shadow over Gabigol, whose poor link-up play against physical center-back Manoel meant that Flamengo could not retain the ball high up the pitch for any length of time. This was not due to Corinthians’ low block A low block refers to a team that retreats deep in their own half out of possession, generally only disrupting their opponents around their own box. but rather because of poor positional play and incompetence in his first touch.

What seemed like a tropical thunderstorm in the opening minutes of the second half saw the match become scrappy. Brash challenges, particularly from Vágner Love, chopped up the game and stopped the flow of Flamengo’s possession. Flamengo, as all South American sides tend to do, gave a few strong challenges back and that only spurred on Corinthians. The game saw thirty-six fouls in total, seventeen from Flamengo and nineteen from Corinthians. Proper cup brawl.

Soon enough, a goal would come. Following a smart free kick routine, a back post cross from Robert Piris da Motta saw Rodrigo Caio fly in at the back post, his outstretched right foot poking the ball past the flailing goalkeeper Cássio Ramos. Corinthians appealed for offside but it was quite simply schoolboy defending; three Flamengo players were unmarked at the back post. Five minutes added time at the end of the game saw Jádson strike a sweet volley that cannoned off the post but that was as close as it got. 1-0, tie decided in the last minute of play!

Neither side was able to get into any sort of attacking rhythm in this game and when there was a shot it was more than speculative. Twenty-three shots between them, five on target. Despite an early mistake, Rodrigo Caio was solid and deserved to get the late winner. His development into a modern quarto-zagueiro A Quarto-Zagueiro is a centre back that has the ability to bring the ball forward into midfield and pick a pass to a more advanced player.. has given an added dimension to his game. It won’t be long till he’s operating somewhere in Europe’s top leagues.

Next up for Flamengo is the biggest of derbies, a game away to struggling Fluminense. Sitting fourth in the Série A, manager Jorge Jesus would be expecting to pick up all three points in an attempt to keep pace with Santos, Atlético Mineiro and Palmeiras. Corinthians find themselves in ninth, only five points away from top spot and with every chance to catch up when they play mid-table Cruzeiro away on Saturday. The season is well and truly underway.