The packed Estádio da Gávea pitted third place Flamengo against Goiás, who occupied seventh place in the Campeonato Brasileiro. An electric start became ugly for the visiting side as three goals in five minutes ended any hope of a comeback. A Giorgian de Arrascaeta masterclass was the highlight of the game, as five goal contributions sunk a helpless Goiás defense.

Two wins in their last two Série A matches saw Jorge Jesus’ Flamengo side come into this one on a solid vein of form. Still in the Copa do Brasil, fixture congestion could have been an issue as Gustavo Cuéllar made way for attacking midfielder Diego in Jesus’ new 4-1-3-2 shape. The change from the usual 4-2-3-1 shape would be an interesting watch. Instead of one of the two having to play on the outside, strikers Bruno Henrique and Gabigol were now instilled as a strike partnership. In their backs, Vitinho made way for Everton Ribeiro.

It was also the first Flamengo match for Rafina, who has ended his long spell as Bayern Munich squad player. His first Brazilian domestic league match since 2005, bringing an instant upgrade to Flamengo’s defense.

Manager Claudinei Oliveira set up Goiás in their usual 4-2-3-1 formation. Yago and Rafael Vaz partnered up in central defense; Goiás had only conceded eight goals so far this season and this partnership was the cornerstone in their solid defensive organization. Kayke Rodrigues had been the perfect ponta da lança A ponta da lança is the Portuguese interpretation of a lone striker. They are expected to account for a large amount of the team’s goals but also hold up the play for others. for Oliveira, with four goals and two assists in eight games. He would have to be on fine form to trouble Rodrigo Caio in the Flamengo defense.

An incredibly vibrant start from Flamengo coloured the opening precedings. Just three minutes in and already Everton Ribeiro had shown flashes of Garrincha, as he juggled the ball over four Goiás defenders before he played it to holding midfielder William Arão. His powerful volley was tipped over the bar by goalkeeper Tadeu.

Jesus’ clever use of the 4-1-3-2 formation had simply overran Oliveira’s regular 4-2-3-1 shape. The three midfielders, protected by Arão, were narrow and exposed the halfspaces If you divide the field in five vertical lanes, the halfspaces are the lanes that are not on the wing and not in the center. Because there is no touchline like on the wing, players have freedom to go everywhere. But this zone often is not as well-defended as the very center. This makes it a very valuable offensive zone to play in and a lot of chances are created by passes or dribbles from the halfspace. particularly in behind de Faria. It helped that right footed Giorgian de Arrascaeta is prolific on the left hand side, able to cut in and provide opportunities for Gabigol and Henrique. Six minutes in and he had found the net himself. 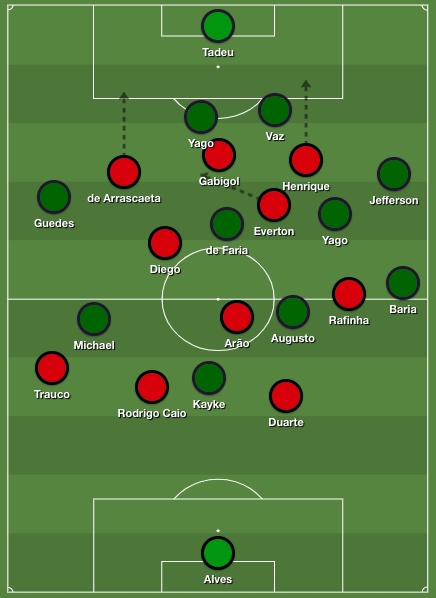 Giorgian de Arrascaeta was able to escape Guedes and the overload gave him the opportunity to give Flamengo the lead.

However, the elation was short lasting, as Rodrigo Caio stumbled in possession and gave Kayke Rodrigues the opportunity to slot past Diego Alves. The striker obliged, meaning the game was level after twelve minutes. It was surprising to see how many men Goiás brought forward, especially considering the danger that Flamengo posed on the counterattack.

Following the early flurry of goals, the first half had continued to be eventful; Henrique tested Tadeu with a firm strike, whilst Michael’s quick feet allowed him to unleash a powerful effort that ricocheted off the post to the luck of Diego Alves in the Flamengo goal. As half-time approached, 1-1 seemed like a good result for Oliveira to take into the break. It wouldn’t remain that way.

Gabigol’s hold up play allowed fullback Trauco to underlap Underlap means that the full-back joins the offensive play by playing on the inside of the winger he supports. This is the reverse of an overlap, where the full-back plays on the outside and the winger moves inside. and, once the ball found his feet, play a driven pass across the box. Henrique slid in and managed to prod the ball into the goal. Debatable as to whether Tadeu’s final touch meant it was an own goal, Flamengo’s underlaps were another key feature of Jorge Jesus’ style of play once again had proved to be successful.

Just one minute later and de Arrascaeta had poked home his second and Flamengo’s third. Gabigol’s dancing feet to escape Jefferson was a positive sign for the Brazilian forward, who had struggled for form. After threatening for so long, Goiás now had their backs to the wall as Flamengo loaded the box. Matters got worse when de Arrascaeta’s cross-turn shot dinked over Tadeu and completed a first half hat-trick.

It was fair to say that Claudinei Oliveira’s half time team talk had been ripped up. Ten minutes after the break and four became five; Giorgian de Arrascaeta was once again involved. The Uruguayan’s chipped ball floated over the destitute Goías defense as the unmarked Gabigol headed home. From then on, the second half was Flamengo’s, as the fifth goal had consigned Goiás to damage limitation.

The fun wasn’t over yet; Everton slotted a cleverly threaded through ball into the path of de Arrascaeta, who laid a square pass off to Gabigol. The forward tapped into an open net. Prolific underlapping and Jesus’ use of narrow wingers had simply crowded Goiás and Giorgian de Arrascaeta’s outstanding individual performance, that included three goals and two assists, was too much for the visiting side. An excellent debut for Jorge Jesus and an amazing result for Flamengo. 31 shots and 74% possession overall; this has to be one of the most dominant matches of the season in Brazil. 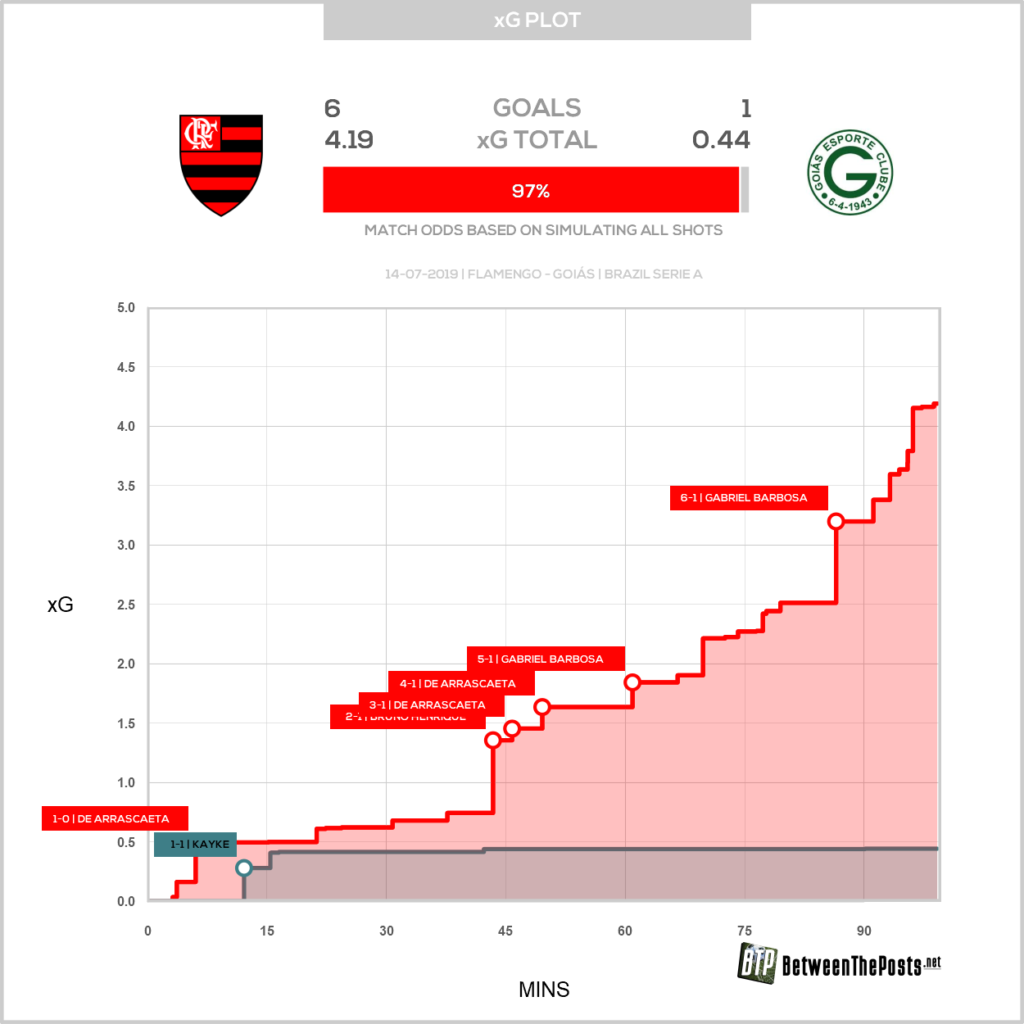 A major positive of Jorge Jesus’ first game on the touchline was in his post-match press conference. “We came in very strong, with a lot of technical and tactical quality…it could have been seven or eight”. His ruthlessness is a show of intent from the Flamengo manager as he attempts to close the six point gap separating them from Série A leaders Palmeiras. It will be interesting to see how this hyper attacking formation holds up against better opponents however, as five attacking players are been given cover by Arão, who used to be the more attack-minded midfielder in the double pivot. 4-2-3-1 is one of the most frequently occurring formations in football. The two most defensive midfielders are called a ‘double pivot’.

It was a day to forget for the visiting side as Claudinei Oliveira’s 4-2-3-1 shape was not set up to cope with the consistent attacking. Their next game sees them visit rock-bottom Avaí, who are yet to win. Flamengo are pitted at home to Athletico Paranaense in the second leg of their Copa do Brasil clash. It is currently 1-1 on aggregate. A polarising story at the Estádio da Gávea: a very happy Flamengo, and a dejected Goiás.