First would clash with fourth as the Brazil Serie A leaders Flamengo hosted Internacional. With both sides coming off multiple-game win streaks, this promised to be an entertaining battle and it certainly did not disappoint. Attacking football and some game-changing red cards highlighted this match.

Jorge Jesus put out the hosts in a 4-2-3-1 formation. Diego Alves protected the goal with a four-man backline comprised of Rafinha and Filipe Luís as fullbacks and Rodrigo Caio and Pablo Marí in central defense. Their double pivot 4-2-3-1 is one of the most frequently occurring formations in football. The two most defensive midfielders are called a ‘double pivot’. was Gerson and Willian Arão. Everton Ribeiro and Giorgian De Arrascaeta played out wide, with Bruno Henrique in attacking midfield. Gabriel Barbosa would lead the line.

Odair Hellmann set Internacional up in a 4-3-3 formation for this away trip. They had Marcelo Lomba between the sticks. Bruno and Uendel flanked Rodrigo Moledo and Víctor Cuesta to make up the four-man defense. The midfield three had Rodrigo Lindoso at the base with Edenílson and Gustavo at his sides. Striker Paolo Guerrero would have support on the wings from Nicolás López and Patrick.

It was a frenetic start to the game with possession changing hands constantly as a fast pace was set. Flamengo would try to build up with their fullbacks pushing up high, more or less in line with their double pivot. Gerson and Willian would be slightly staggered, as the one nearest to the ball would drop slightly deeper than his counterpart. The home side would usually progress the ball into the final third The one-third of the pitch that is closest to the opposition’s goal. through the wide areas. They would have their fullbacks carry it forward or look for vertical balls to their wingers dropping back. Gabriel would then drop deep at times, alternating with Bruno Henrique in occupying the more central areas.

Internacional initially combatted this Flamengo buildup with a high press that had the fullbacks as the trigger. This brought varying success with Flamengo managing to beat the press easily as they settled into their game.

Whenever the press was beaten, Internacional would fall to a 4-5-1 shape with Guerrero staying up top. They would have a compact 4-5 block camped near their box, denying spaces for the probing Flamengo attackers. The depth of their shape meant that countering would be difficult for the visitors. So early on, Internacional settled with going direct to Guerrero and Patrick at times, as they both boast imposing figures. This was where they had their best success, with them being able to advance their side once either of those two held onto possession. They would then look to circulate the ball and set the structure from which they could build an attack. 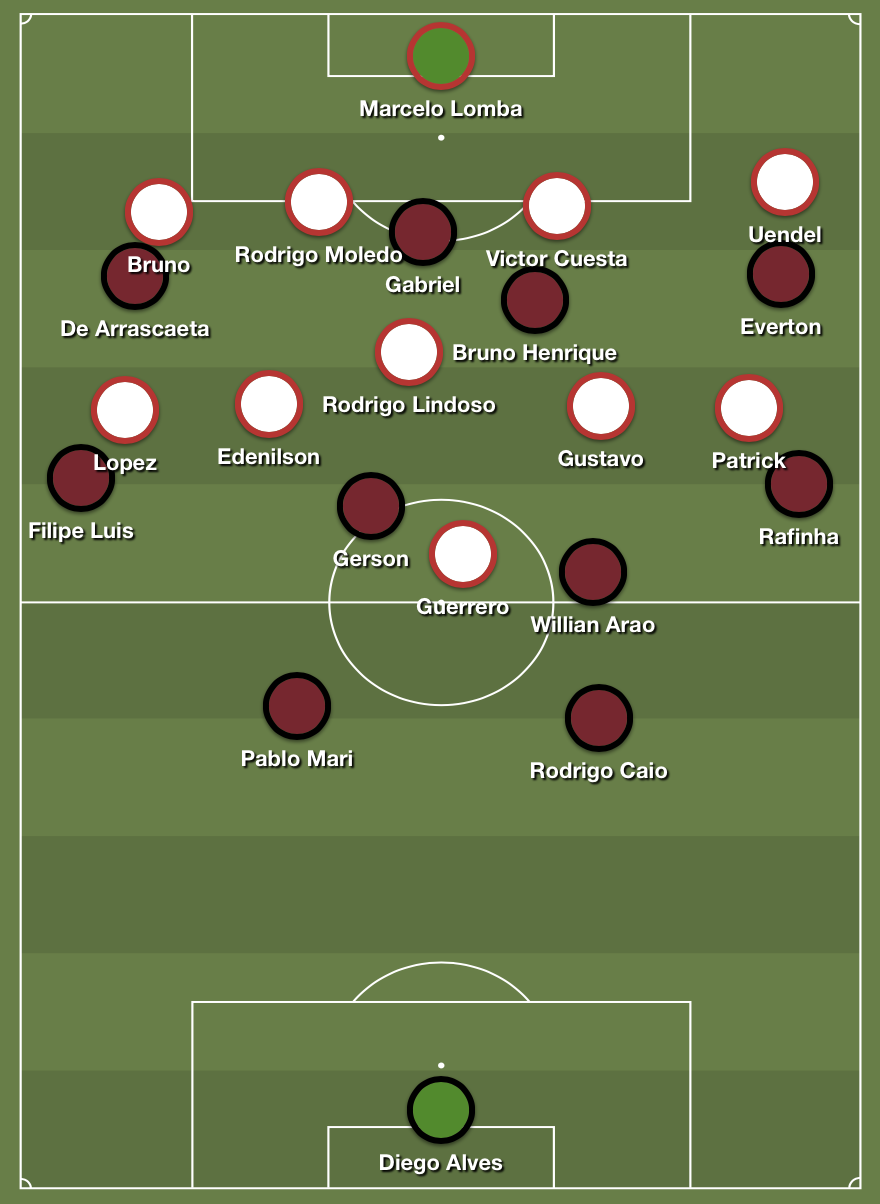 The usual positioning for the early stages with Flamengo on the ball and Internacional in their 4-5-1 defensive shape.

Internacional down to ten

It is also important to note that in the eleventh minute, Rodrigo Moledo pulled up injured and had to be withdrawn for William Klaus in central defense. Being forced into an early change is never welcomed, but this would hurt Internacional in more ways than just losing a substitution. It was Williams Klaus’ error which led to the one-on-one that Bruno got sent off. The substitute lunged to win the ball ahead of Gabriel but missed the ball, leaving the striker to turn towards goal. Bruno was recovering and when Gabriel rounded the keeper, the defender decided to pull him back which drew the red card after VAR consultation. Gabriel buried the subsequent spot kick to hand Flamengo the lead. At this point, tensions certainly started to rise, highlighted by a brief shouting match between Guerrero and the referee only moments after the restart.

Hellmann would use his second substitution to bring on Zeca in place for winger, Nicolás López. He would slot in at right back. Their defensive formation would simply be a 4-4-1, meaning their players would do much of the same work but with extra yards to cover. In possession, Internacional would now play in a 4-3-2 shape where Edenílson and Gustavo seemed to have the freedom to move wherever they wanted to receive the ball and try to threaten Flamengo. They would build up with Rodrigo Lindoso dropping to help the center-backs bring out the ball. The fullbacks, Zeca and Uendel, did not advance as far as they normally would due to them being a man light. 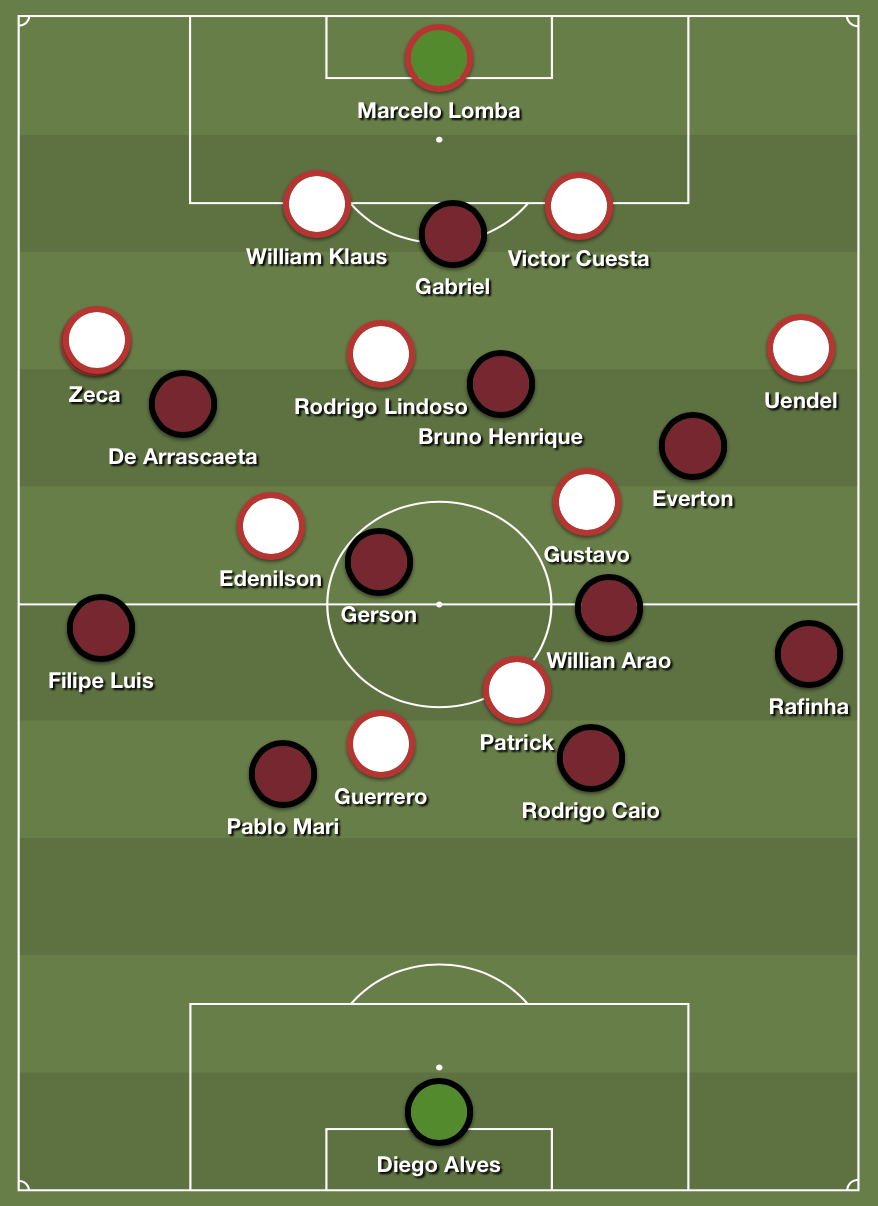 The Internacional 4-3-2 formation in possession after Bruno’s red card.

Internacional’s influence on the game began to diminish rapidly with Flamengo suffocating them of the ball. The hosts were content to hold the ball for long periods, trying to fashion high-quality opportunities. But crucially, they did not concede for the rest of the first half, with their compact shape proving too difficult for the home side to penetrate.

On top of that, they managed to threaten with one accurate long ball over the top which found Edenílson running into the box where he played it to Guerrero. The Peruvian then shaped to strike at goal when contact from the challenging defender felled him. The referee waved away the penalty claims and the game continued. Guerrero made his way off the field to get treatment as the clock ticked towards halftime and when he returned, he was immediately contesting a long ball from a goal kick. The onrushing defender crashed into his back, yet the referee ignored the protests once again and play continued. In the next break of play, Guerrero, bloodied from the challenge, was infuriated with the officiating and was subsequently sent off for dissent. It was half time soon after and Internacional were a goal down and two men down.

Internacional get back in it

Out of the break, Internacional employed what was a strikerless 4-4 formation. This severely limited their attacking potential as any advanced positioning needed to come from the midfielders but this would open up gaps behind them for Flamengo to exploit. 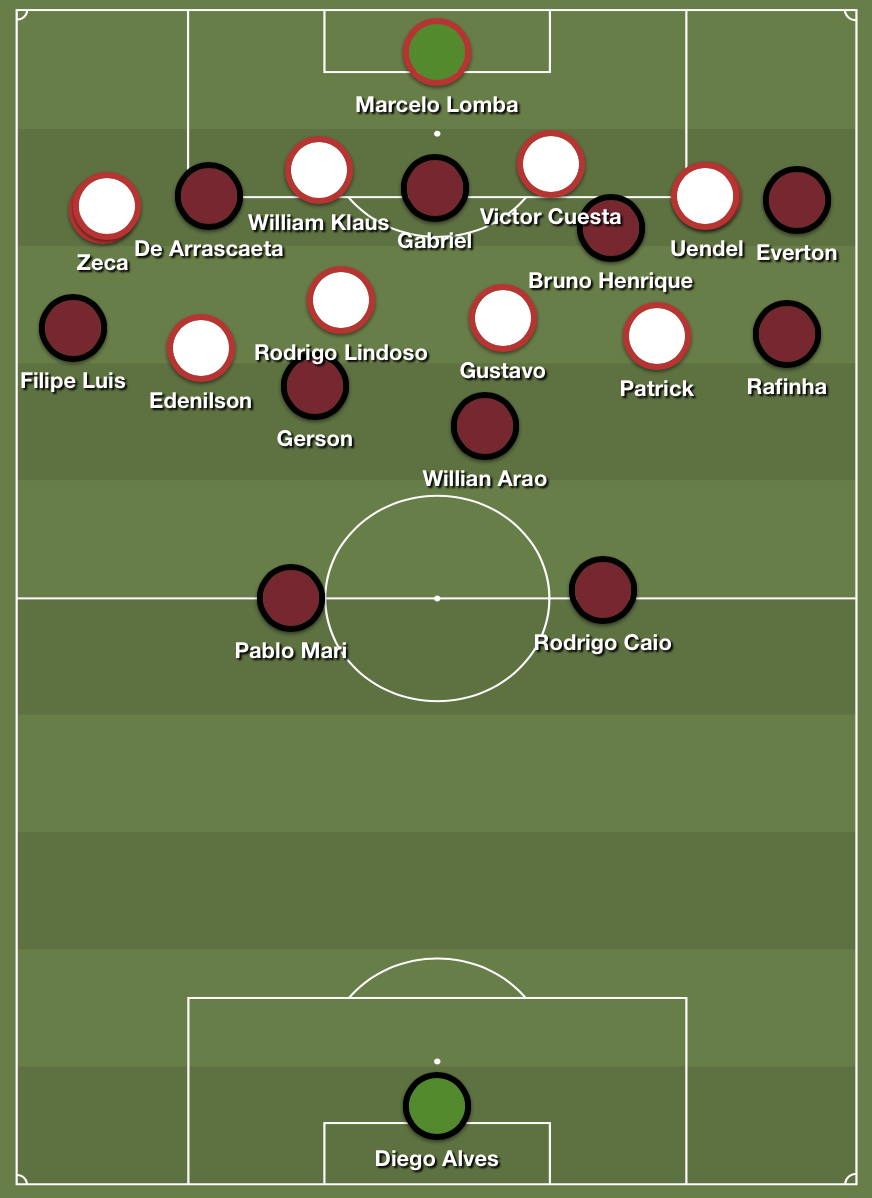 Once Internacional were down to nine, this was the way the game was set up positionally.

They needed a moment of individual quality to get back in the game and they got it from two players. Patrick did exceptionally well to pressure both Willian and Rodrigo Caio to win the ball back by the Flamengo touchline, his tackle knocking the ball to a supporting Rodrigo Lindoso. The midfielder then laid it off for Edenílson at the edge of the box to sweep it home superbly. It was a well-deserved goal for the man at the heart of everything Internacional did. 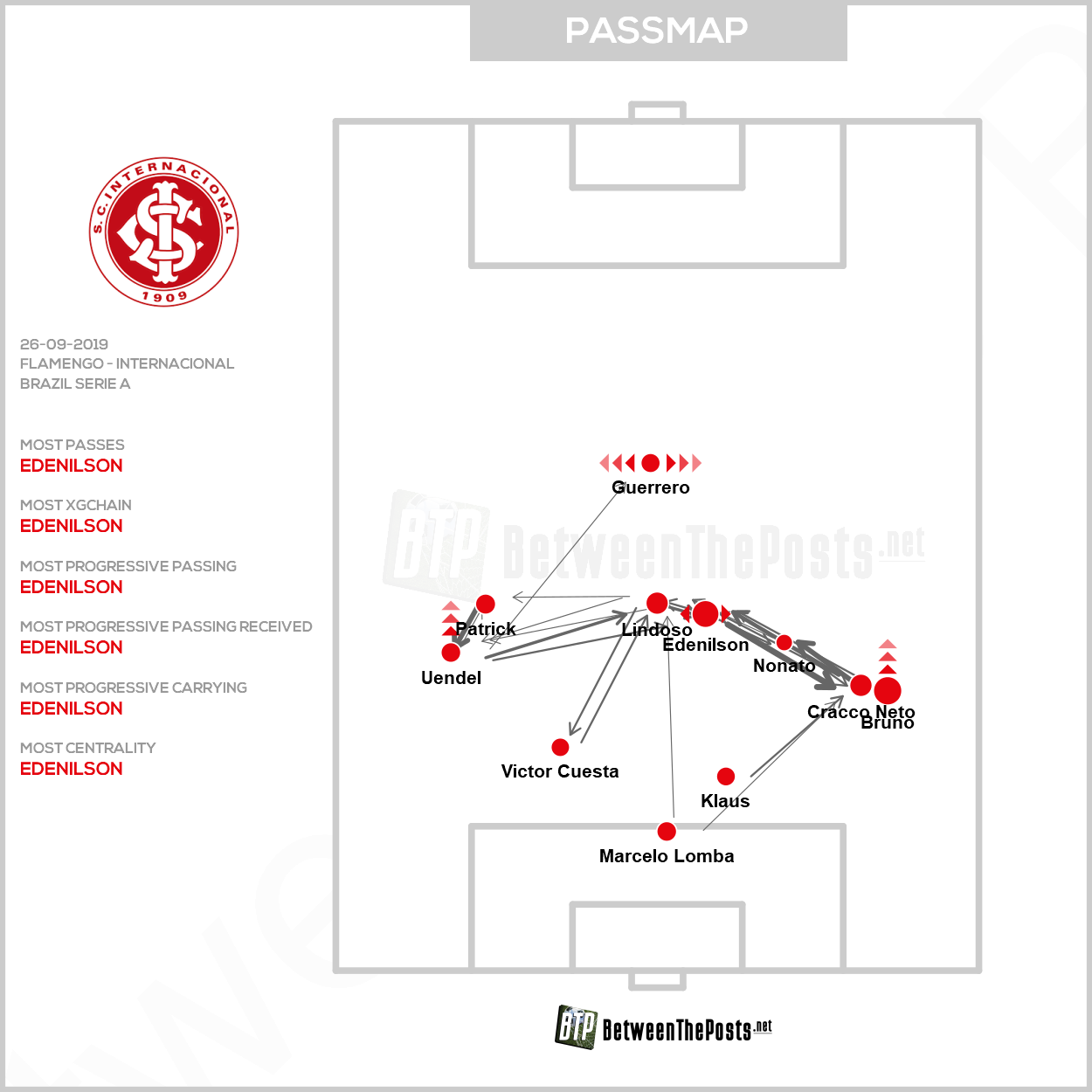 A plot detailing the Internacional passing during this game, highlighting Edenílson’s importance to the visitors.

The equalizer brought the hosts back to life. They instantly starting playing with more urgency and found their second goal a few minutes after conceding.

With De Arrascaeta and Bruno Henrique joining Gabriel in the box, they had plenty of options to aim at. They had their fullbacks pushed up high and unable to be pressured due to Internacional’s numerical deficit. This left Rafinha in acres of space to swing in a cross that De Arrascaeta headed home between two defenders.

The game then proceeded as one might expect with constant pressure being applied by Flamengo in search of the final blow. This eventually came fifteen minutes from time. Rafinha, again with time on the right, sends in a cross, this time to the back post to find De Arrascaeta completely free. His first-time volley across goal found Bruno Henrique who had once again joined his midfield partner in supporting Gabriel in the box. Bruno Henrique tapped it in and the game was effectively over. Internacional had a great chance to pull one back but Rodrigo Lindoso squandered a gilt-edged opportunity after substitute Guilherme Parede headed down a corner to him, alone in the box.

One can look at the numbers and they will sum up the Flamengo’s dominance fairly succinctly.  72% possession. 22 shots to two, which resulted in them having 2.51 expected goals The amount of goals a team is expected to score based on the quality of the shots they take. to their opponent’s 0.07. But there were certainly mitigating factors to consider with the two dismissals heavy contributors to the dynamics of the contest. Taking those into account, Internacional certainly put up a good fight. They frustrated the hosts for long periods and riled up them up a fair bit. Even Jorge Jesus found himself in heated exchanges with some of his own players. 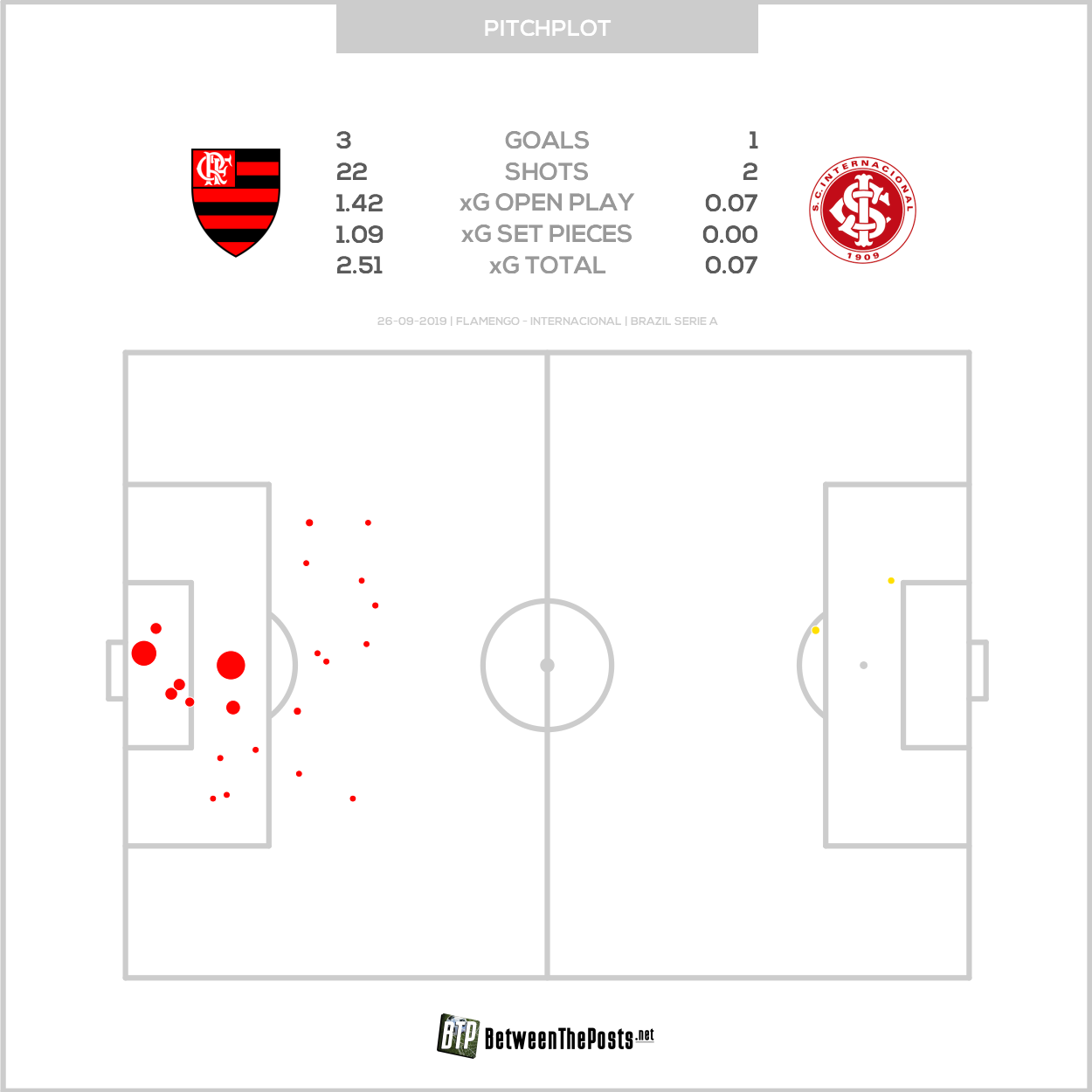 This was not as comprehensive a victory as Flamengo may have expected, especially after the Internacional red cards. Nevertheless, they walked away with the three points necessary to maintain their lead over Palmeiras in the league standings. Internacional will be disappointed their winning streak was ended in such fashion, in a game where they will feel particularly hard done by. They now move on to another big fixture when they host Palmeiras, while Flamengo will welcome new visitors, São Paulo, for their next game. 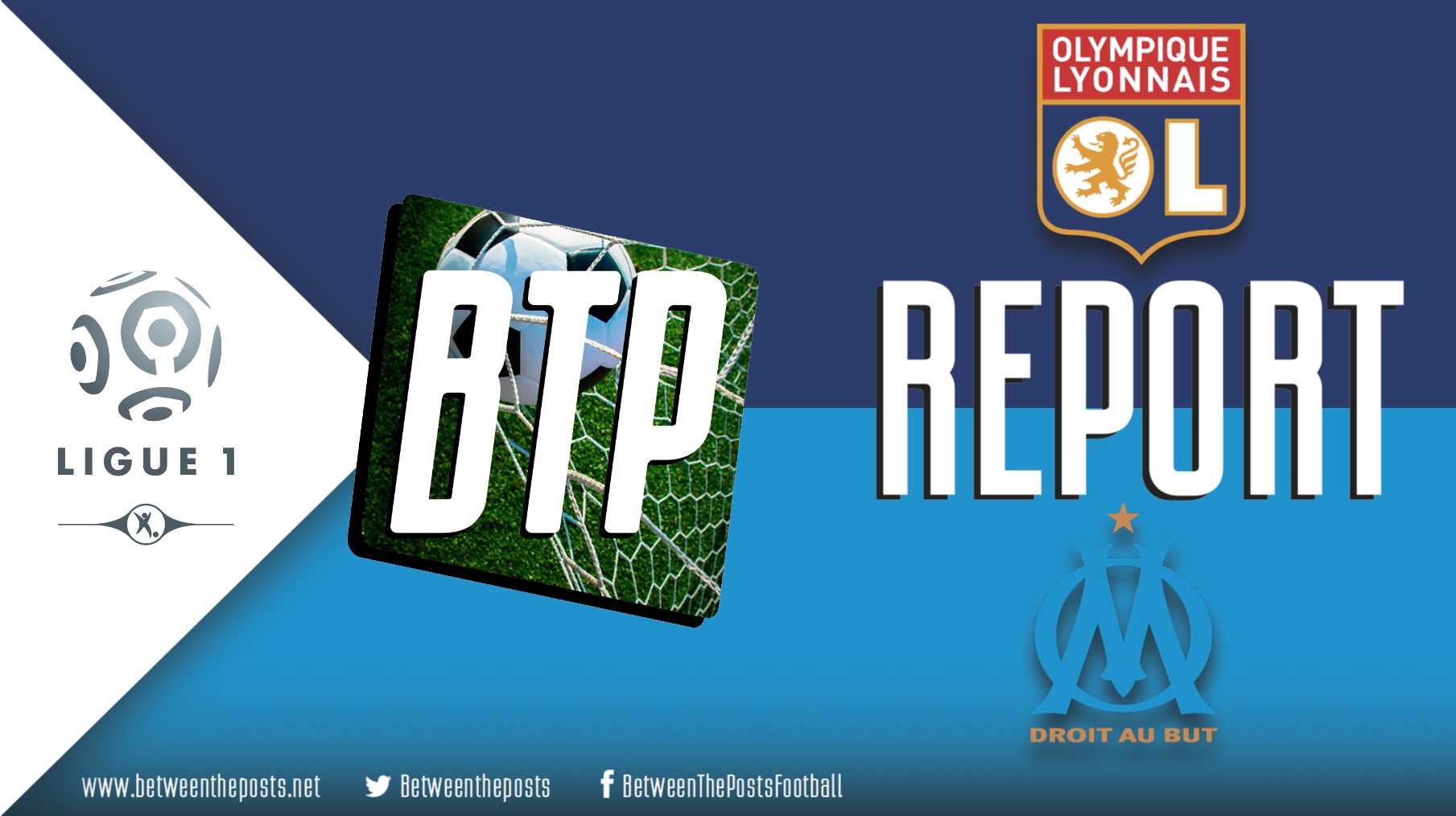 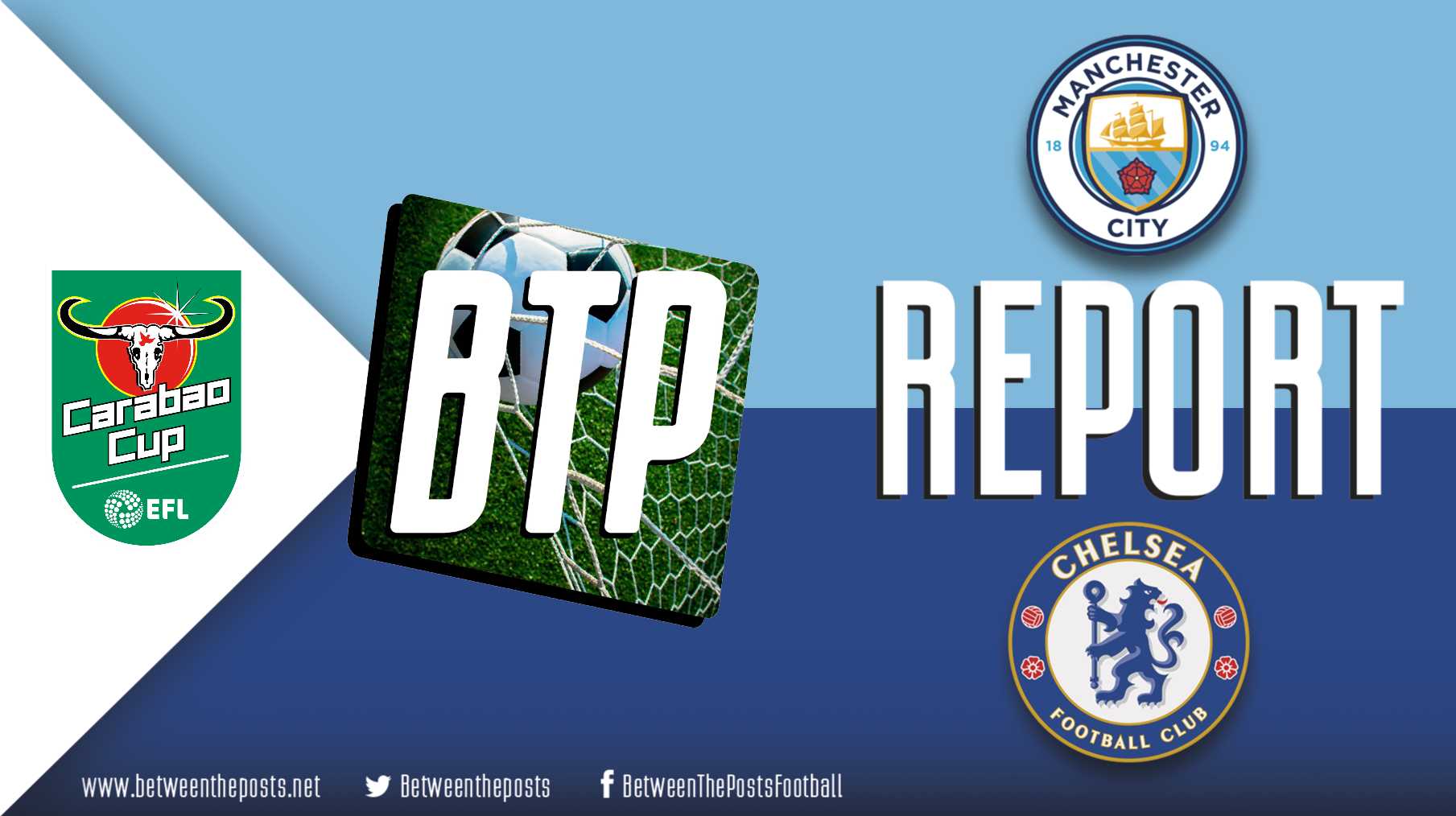