France began their World Cup title defence with a comprehensive Australia in the final fixture on Tuesday night. They did suffer an early scare as they conceded the opening goal, but it was all one-way traffic thereafter. In the process, they also seemed to find the right setup in possession that gets the most out of the players they have available, so it was a very good night for them overall.

The curse of the champions is a funny thing, but it was something that France would have been wary of going into the tournament. There was some tactical instability for them going into the tournament as Didier Deschamps chopped and changed between a back four and back three in previous matches, but more importantly, they were missing a number of key players through injury.

Australia, on the other hand, were looking for their first World Cup victory since 2010. They had qualified in the last editions as well but picked up just one point in Brazil and Russia combined. Their qualifying campaign for 2022 did not go particularly well as they had to beat Peru on penalties in an intercontinental play-off, but all that matters ultimately is that they got the job done.

As we expected, France lined up in a 4-2-3-1 formation with Hugo Lloris’ goal protected by a back four of Benjamin Pavard, Ibrahima Konaté, Dayot Upamecano and Lucas Hernández. Aurélien Tchouaméni was joined by Adrien Rabiot in defensive midfield with Antoine Griezmann ahead of them, whilst Ousmane Dembélé and Kylian Mbappé flanked Olivier Giroud up front.

Australia used their favoured 4-3-3 formation, with Harry Souttar and Kye Rowles as the center-backs, and Nathaniel Atkinson and Aziz Behich as the fullbacks ahead of Mathew Ryan in goal. Aaron Mooy had Jackson Irvine and Riley McGree on either side of him in midfield, whilst Matthew Leckie, Craig Goodwin and Mitchell Duke made up the front line.

In our preview of France’s World Cup, we expected them to defend in a medium block and not press high up the pitch out of their back four. That is precisely how they set out in this match, but this passive defensive approach did not work too well.

Australia kept 57% of possession in the first ten minutes of the match, as their center-backs were allowed to keep the ball without too much hassle. Of course, France’s defensive shape focused on keeping things tight in midfield, which they did, but that did not matter to Australia, who focused on playing long balls out to the wings in possession.

Indeed, it was such a pass that created the opening goal. With time to pick his target, Souttar sprayed the ball out to Leckie, whose wonderful control took him past the fullbacks before he set up Goodwin at the far post.

What a start for the Socceroos! 🙌

Craig Goodwin has given Australia a shock early lead over France 😲

💻🖥📱 Watch on @BBCiPlayer, listen on @BBCSounds, get more on the @BBCSport app#BBCWorldCup #BBCFootball pic.twitter.com/fQJedcEzMs

It was that easy. Nine minutes in, Australia were on course to cause the second major upset of the day after Saudi Arabia’s shock win over Argentina.

In the aforementioned match, one of the keys to Saudi Arabia’s success was that they stuck to their bold gameplan and did not shrink into a defensive shell, neither when they were behind, nor when they took the lead. Australia, however, did not do so as they invited pressure from France after scoring first, which caused them to crack soon enough.

They began to defend in a 4-5-1 low block and happily ceded possession to France, who kept 68% of it between the tenth minute and half-hour mark. The defending champions fashioned a number of chances in this period, but the crucial one came from the second phase of a set-piece when Rabiot headed in the equalizer.

For their part, France also adapted their approach after learning from their prior mistakes. Realizing that Australia were not keen to play through midfield which reduced the risk of their press being carved apart, they started defending higher up the pitch as well in a slightly asymmetrical block.

Mbappé pushed up alongside Giroud in order to enable his side to press both Australian center-backs, whilst Dembélé dropped a little deeper. In midfield, Tchouaméni stayed put ahead of the back line, but Rabiot did step forward to back up the press on the left in the space vacated by Mbappé. 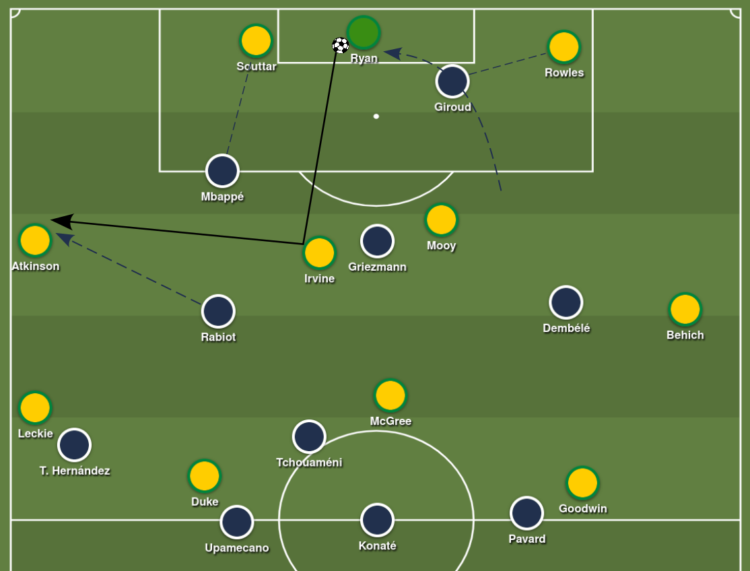 32nd minute: France’s high press against Australia in the buildup to their second goal.

Once again, though, Australia played right into France’s hands thanks to their insistence in attempting to play out from the back even when they were quite clearly pinned in, which cost them dear for the second goal. With that, the game state was completely altered once more, with France on top in all aspects now.

France find their groove in possession

After taking the lead, France were in cruise control, especially after the half-time break. They still needed at least one more goal to cushion their lead and make things very comfortable towards the end of the match, which eventually came.

In the 68th minute, Mbappé headed in a great cross from Dembélé to score his first goal at this World Cup. The Paris Saint-Germain youngster then set up Giroud’s record-equalling 51st international goal just four minutes later, which gave France a three-goal lead and effectively sealed the result then and there itself.

Of course, Deschamps enjoyed seeing the goals go in, but the most encouraging aspect of the second half for him probably was how his side played in possession. His decision to start Lucas Hernández ahead of his brother Theo rather limited France down the left, but an early injury forced him to make that switch anyway.

The AC Milan fullback got forward a lot more frequently, whereas Pavard on the other side often stayed deeper to create a back three or even inverted into midfield. In possession as well, Tchouaméni stayed deepest and dictated his side’s play, whilst Rabiot often got forward on the left and Griezmann dropped on the right. On the wings, Dembélé generally stayed wider, whereas Mbappé often tucked inside to accommodate Theo Hernández’s advances. 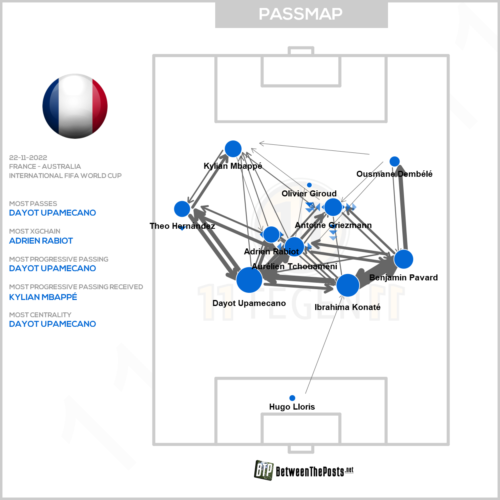 France’s passmap between their first and second substitutions clearly depicts the above patterns.

All in all, this was a very complete performance from France. In hindsight, they might even be pleased to have conceded that early opening goal because it really shook them up and forced them to change their approach for the better. Lucas Hernández’s injury in the buildup to it was, of course, not good to see at all, but in the picture, it is quite clear that France looked a lot better with his brother Theo on the pitch ahead of him. They are well on their way to the knockouts now, but Denmark will provide a much tougher test next week.

In the other dressing room, Australia would not have had too many complaints about the result as they were clearly outplayed. Graham Arnold’s side started the match off very well, but as aforementioned, their lack of endeavour after taking the lead was a mistake. They were never greatly backed to advance from this group, but their chances have been slashed further by the nature of this result.