The final international break before the World Cup will see European sides finish the group stage of their Nations League campaigns. Of course, the rewards within the competition are at stake, but in a wider context, teams and players that are set to travel to Qatar in November will be quite keen to take this final opportunity to impress. Austria are not one of those teams but their Group 1 opponents France are, so Didier Deschamps’ side’s performance was of particular intrigue.

Defending World Cup champions France were once again looking strong as we approached the tournament, but as ever, they did have some questions to answer. The quality of the players at their disposal and squad depth unquestionably is among the very best in the world, but the trouble for them has sometimes been finding a way to get all of their superstars to click as a team. They had clearly faced this issue in the Nations League, as they found themselves in the relegation spot in their group heading into this fixture.

With their tally reading just four points prior to this fixture, Austria were the side that were most likely to suffer relegation if France managed to stay up. In the aftermath of their disappointing World Cup qualifying failure, Franco Foda lost his job as the head coach of their national team (and has since gone on to take and swiftly lose a job at FC Zürich too). His successor, Ralf Rangnick, had only taken charge of four Nations League matches for Austria so far, so keeping them up in League A would be a nice first noteworthy success for the former RB Leipzig head coach.

France switched to a back three for this fixture, so Jules Koundé, Raphaël Varane and Benoît Badiashile lined up directly ahead of Mike Maignan in goal. Jonathan Clauss and Ferland Mendy operated on the flanks, whilst Aurélien Tchouaméni was reunited with his former club teammate Youssouf Fofana in midfield as the latter making his international debut in this match. Olivier Giroud partnered Kylian Mbappé up front, with Antoine Griezmann operating just behind them.

Austria unsurprisingly lined up in Rangnick’s favoured 4-2-2-2 formation. Patrick Pentz stood between the sticks behind a defensive line of Christopher Trimmel, Philipp Lienhart, David Alaba and Maximilian Wöber. Xaver Schlager joined Nicolas Seiwald in central midfield whilst Marcel Sabitzer and Andreas Weimann were on either side of them, and Marko Arnautović led the line alongside Karim Onisiwo.

France concentrate fire on the flanks

Deschamps’ switch to a back three could well be for the long-term, but focusing solely on this match, it worked an absolute treat against Austria’s defensive system. At this point, every person and their dog knows about Rangnick’s 4-2-2-2 shape out of possession and its narrowness, so France looked to bypass it by using the wide areas of the pitch.

The first advantage they had was that their back three naturally had a numerical advantage against Austria’s front two, so the visitors could not really afford to press high up the pitch. Then, of course, France’s wing-backs allowed them to stretch the pitch horizontally and progress the ball down the wings. 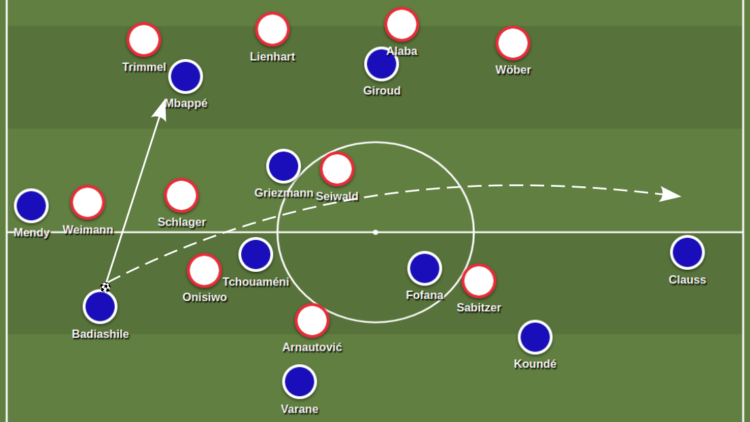 15th minute: Badiashile has a number of options with the ball at his feet, including a crossfield pass to Clauss on the right. He instead decides to find Mbappé down the line, after which the PSG man spins around Trimmel and carries the ball forward down the flank.

Thanks to their ability to access the flanks in this way, France were utterly dominant in the first half. They kept over 60% of possession and attempted 15 shots, so the only reasons they did not score were some subpar finishing and great goalkeeping by Pentz.

As you might have been able to tell by this point, this article is supposed to focus on France for a number of reasons. Yet, a report on this match would be incomplete without a mention of Austria’s work in possession, which was arguably the most intriguing tactical aspect of this game.

When they had the ball, Austria tended to switch to a three-man midfield. This was informed by some of the player selection done by Rangnick, particularly in the wide attacking positions. On the right was Weimann, a player who has thrived in a more central attacking role at Bristol City. On the other hand, Sabitzer, a midfielder by trade, lined up on the left. By switching to a three-man midfield, Austria could get the best out of both players. They did so by having Seiwald drop a little deep and pushing Schlager out to the right, allowing Sabitzer to tuck inside from the left wing and Weimann to push forward. This, in turn, opened up the wings for the fullbacks to advance. 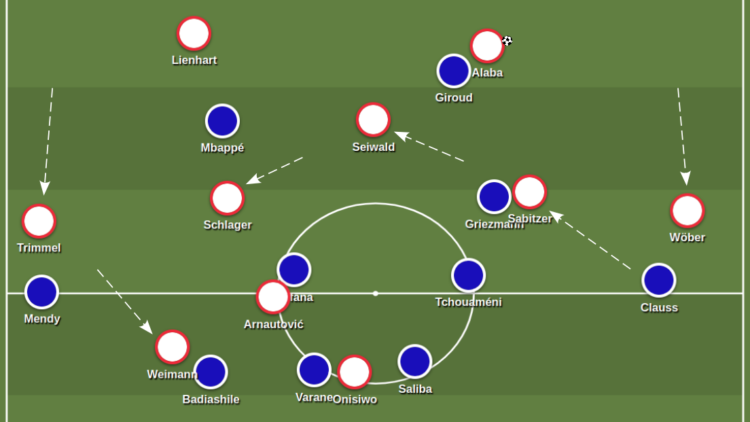 This three-man midfield can also be seen in Austria’s passmap from the match. 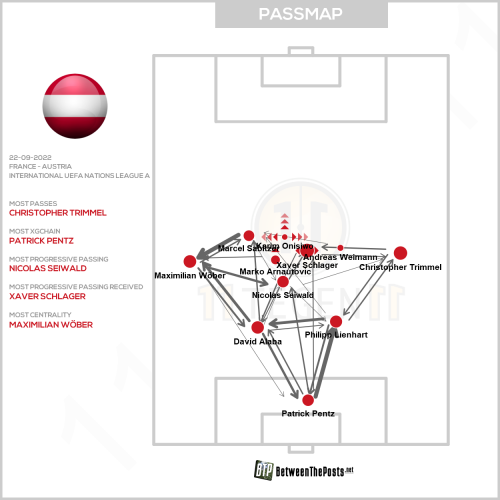 Austria’s passmap also highlights their struggles to get the ball to their forwards, who had to drop into midfield to have any involvement in possession.

It should be said that France’s defensive shape was geared quite well to defend against this and Austria struggle to create much going forward as they fired just one shot in the entirety of the first half, so for all their positional switches in midfield, the visitors did not really pose any problems to their opponents. Still, they cannot be faulted for making the match less interesting at least.

France finally make their chances count in the second half

Deschamps would have been pretty pleased with his side’s performance at half-time, but as aforementioned, the only thing they failed to do was put the ball in the back of the net, and unfortunately for them that is precisely the main objective in a football match. They were determined to rectify that in the second period, and it did not take them long to do so.

One of the weaknesses of Austria’s shape in possession was that they were a little susceptible to being exposed in transition, especially on the flanks when their fullbacks got far forward. Just over ten minutes after the restart, this is what led to France taking the lead. Mbappé was the man who dealt the damage after a turnover allowed him to carry the ball forward ahead of Trimmel, after which he navigated his way past a number of defenders before firing a smart finish past Pentz.

A subsequent ten minutes later, the home side managed to double their advantage. This time, the chance was created from the right wing after sustained possession. Griezmann delivered the cross for Giroud, who headed home his 49th goal for the French national team, closing in on Thierry Henry’s record of 51.

Thereafter, it was simply a case of seeing the match out for France, who had a two-goal lead to show for their dominant performance. If any side looked likely of scoring again, it was them, but the full-time whistle blew without the scorekeepers being troubled again as France sealed a thoroughly deserved win. 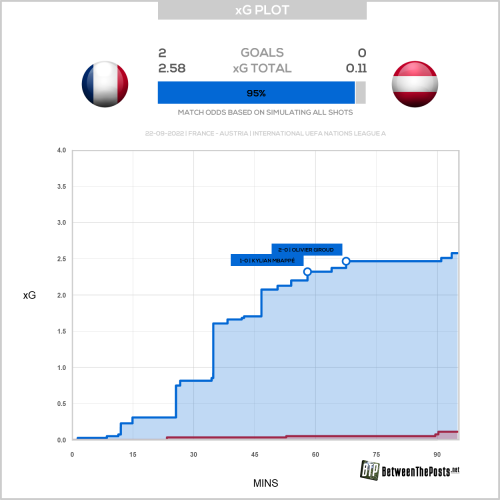 It sure took them long enough, but France finally registered their first win of the Nations League campaign at a crucial time. They are now out of the relegation zone and have a very good chance of staying up in League A, so this was an important result in that context. Of course, as far as preparation for the World Cup is concerned, things could not have been much smoother.

Austria, on the other hand, are in serious danger of relegation now. They will need to beat league-leaders Croatia in their final fixture and hope that France drop points against Denmark at the same time, so things are not looking good for them. They showed some interesting ideas in this match, but the inherent tactical disadvantage they faced against a back three made it an uphill battle from the very start. 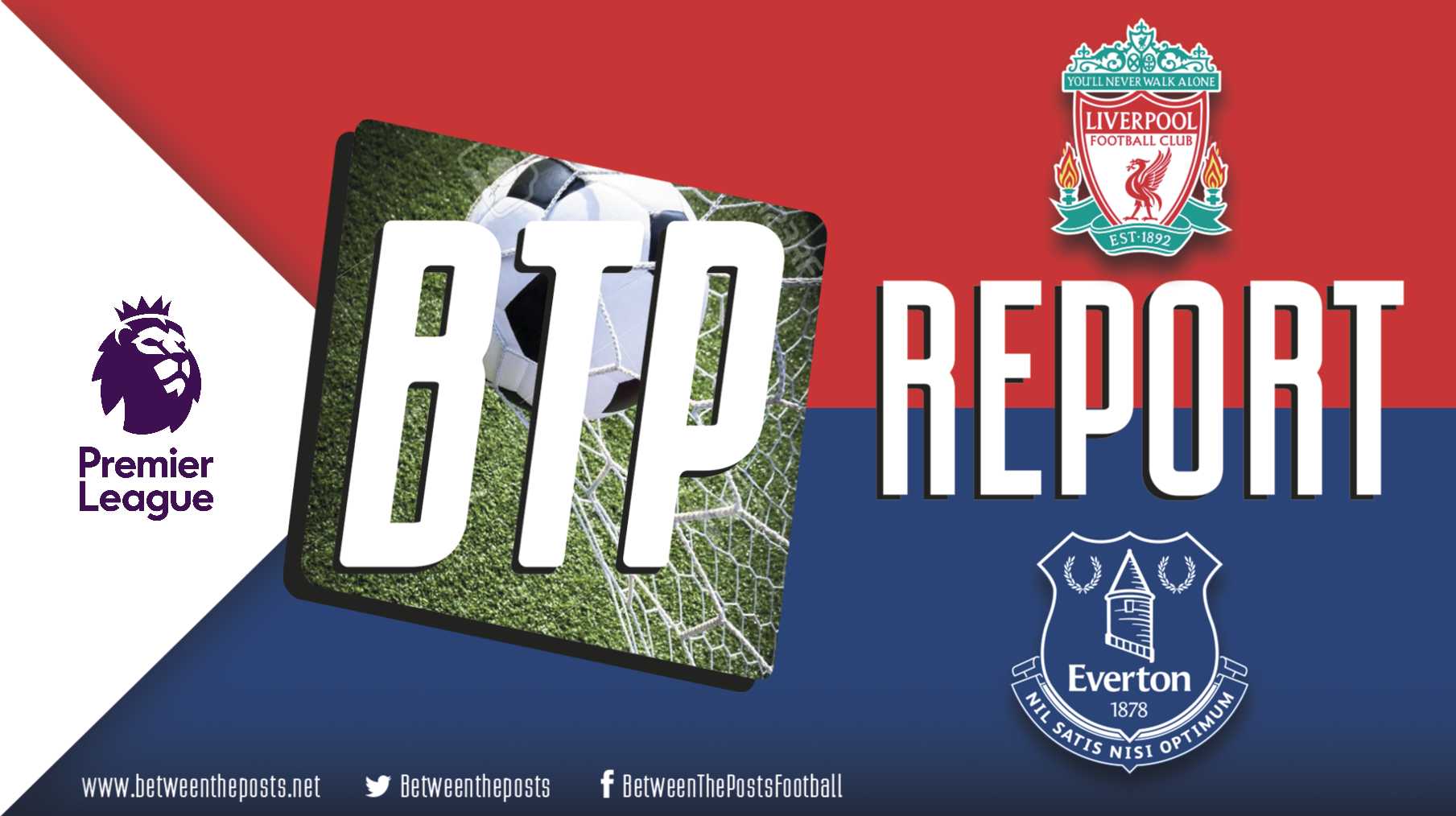