The Germans suffered the trademark defense plus counterattacking strategy of Deschamps’ France. Looking at shot count and expected goals might wrongly show Germany as the dominant side, as these numbers were just a result of the game state. After France’s 20th-minute goal, Les Bleus mostly sat back and let the Germans come to them. The Germans kept crashing against a French fortress led by Raphaël Varane, with Pogba leading the linkup from defense and attack and Mbappé turning every counterattack into half a goal.

Love or hate their counterattacking style, the French national team of manager Didier Deschamps knows how to get the best out of their most impactful midfielders and attackers. “Pass into space for Mbappé” is a tactical cheat code, and this strategy is even more effective when the players feeding him balls are Paul Pogba, Antoine Griezmann and Karim Benzema.

The French lineup for this game saw no big surprises, with the same nominal 4-3-3 lineup Deschamps has favored recently to accommodate the mobile Griezmann-Mbappé-Benzema forward trio. While commentators described this lineup as a 4-4-2 diamond with Griezmann in a number ten role, France rarely took this shape on or off the ball.

France took an asymmetric 4-3-3 formation with the ball: an aggressive Mbappé tried to run behind defenses while Benzema in the center and Griezmann on the right dropped into midfield zones to help their team play out the back. In defense, France pressed in a 4-3-3 but then retreated into a 4-4-2 when their pressing was bypassed, with Griezmann often tracking back on the right side.

Germany used the 3-4-3 shape that Löw has been testing since the March international break, deploying the same starting eleven used in their friendly against Latvia. The things that stand out the most from this lineup are the double pivot Two central midfielders next to each other. of İlkay Gündoğan and Toni Kroos, the use of Joshua Kimmich as a wingback, and the use of a narrow but mobile front three in Serge Gnabry, Thomas Müller, and Kai Havertz.

Open at the start

The beginning of the game turned out surprisingly open and end-to-end, with France’s 4-3-3 defensive setup looking less compact than usual and leaving some space between their lines. Germany’s tactical setup helped create this defensive disorder since the French struggled to press the German 3-4-3 possession structure. By building up with the three center backs- (Ginter, Hummels, Rüdiger) and two wing-backs-(Gosens and Kimmich) the Germans drew Pogba and Kanté out to press and forced them to cover a lot of ground.

Thanks to the advantageous passing angles produced by this back three setup and the outstanding passing quality of Kroos, Rüdiger, Hummels, and Gündoğan, Germany often managed to bypass the French press and find the spaces behind Pogba and Kanté.

I do think this is a much more open France than the 2018 edition with Matuidi on the left and Kanté and Pogba in the double pivot. pic.twitter.com/tnUu5mCVYZ

However, Germany could not fully exploit this French defensive issue and create great chances because their attackers – Gnabry, Müller, Havertz – could not outrun the fast, intelligent, and skillful French defensive line. And whenever the Germans bypassed the French pressing line, it didn’t take long for Pogba, Kanté, or Griezmann to come rushing back to aid their defense. 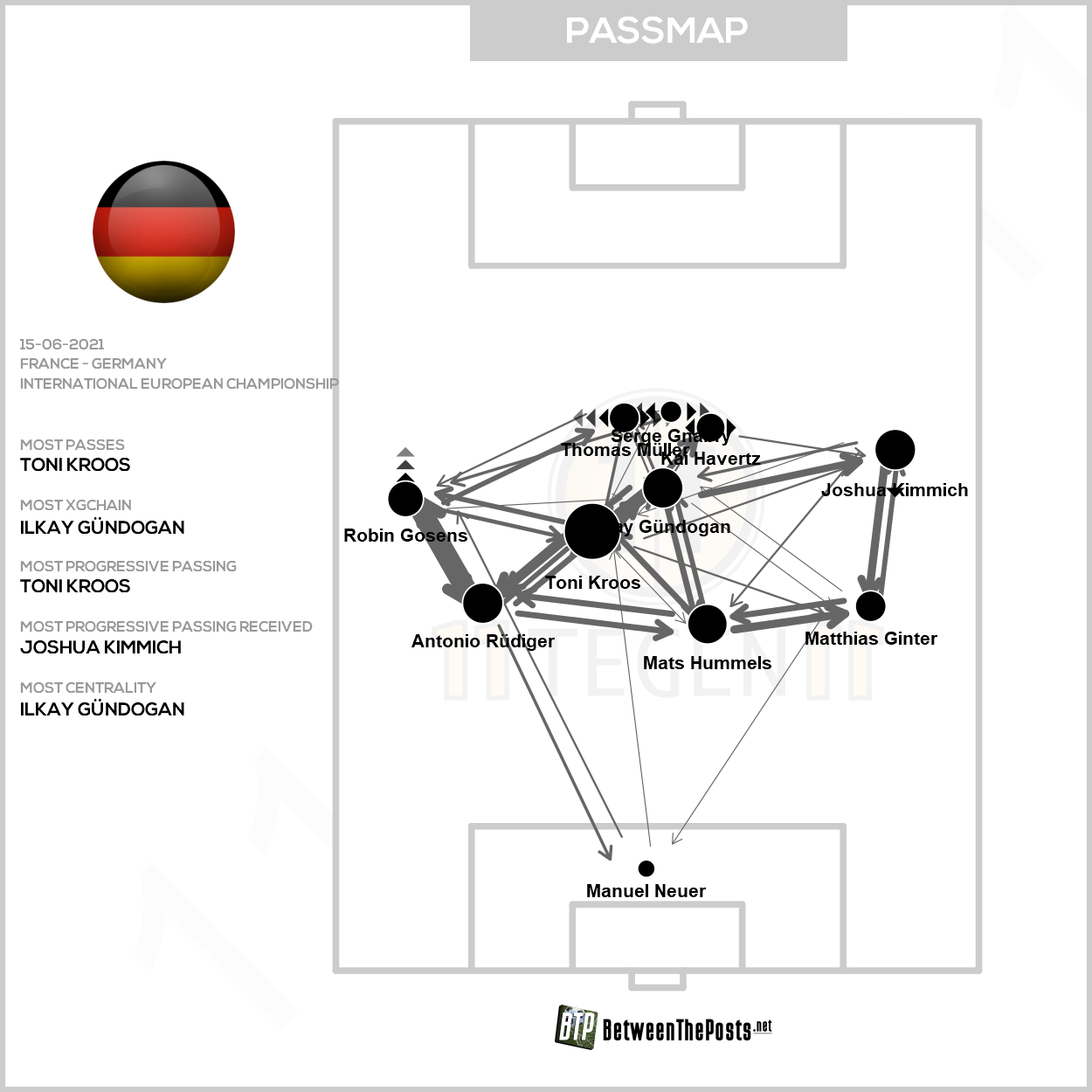 As Germany’s attack struggled to create high-quality chances, it was only a matter of time before France’s world-class attackers responded in kind and inflicted significant damage through their individual quality. In the 20th minute, a magic switch of play by Pogba found Lucas Hernández, who hit the ball on the volley towards Mbappé. Mats Hummels got to that ball first, but his attempt at a clearance ended up going into the top of Neuer’s goal, looking more like a finish of an elite striker than a proper defensive clearance.

While Germany took the initiative after this goal, France’s defense – having retreated into a deeper 4-4-2 block – looked more stable and compact. The Germans could not breach the center of France’s defense, where the likes of Varane, Pogba, and Kanté could snuff out any attacking threats at a breakneck pace. Germans exceedingly narrow 3-4-3 also played to France’s defensive strengths, with Müller and Gnabry staying in the central areas where the French defense had compressed all the available space and time.

Given Germany’s front-line issues, most of the German threat came in from the wings, with Gosens and Kimmich doing their best to beat their men and deliver crosses into the box. However, any German crosses into the box would be cleared by the French defense, led by a Varane who was outstanding at defending open spaces and his box, with a total of nine ball recoveries, three tackles plus interceptions, and nine clearances.

This game state continued well into the second half. France had no incentive to change its tactical approach, and German manager Joachim Löw surprisingly did not change anything over halftime. Löw’s substitutions came in too late and did not improve the situation for his team, with speed demons Timo Werner and Leroy Sané replacing Kai Havertz and Serge Gnabry at the 74th minute. The pair could have been helpful in the initial open-ended stages of the game, but the compact French defense did not concede any time and space for them to have a real impact during the second half.

Meanwhile, the French kept creating dangerous counterattacks from passes into space for Mbappé, either through long passes from Pogba and sometimes Varane or through shorter passing combinations with Benzema, Griezmann, and Kanté. Two counters ended up at the back of the German net but were ruled out offside via VAR: a stunning shot by Mbappé at the 66th minute, cutting inside and curling a shot past Neuer, and a Mbappé run + assist to Benzema at the 84th minute. 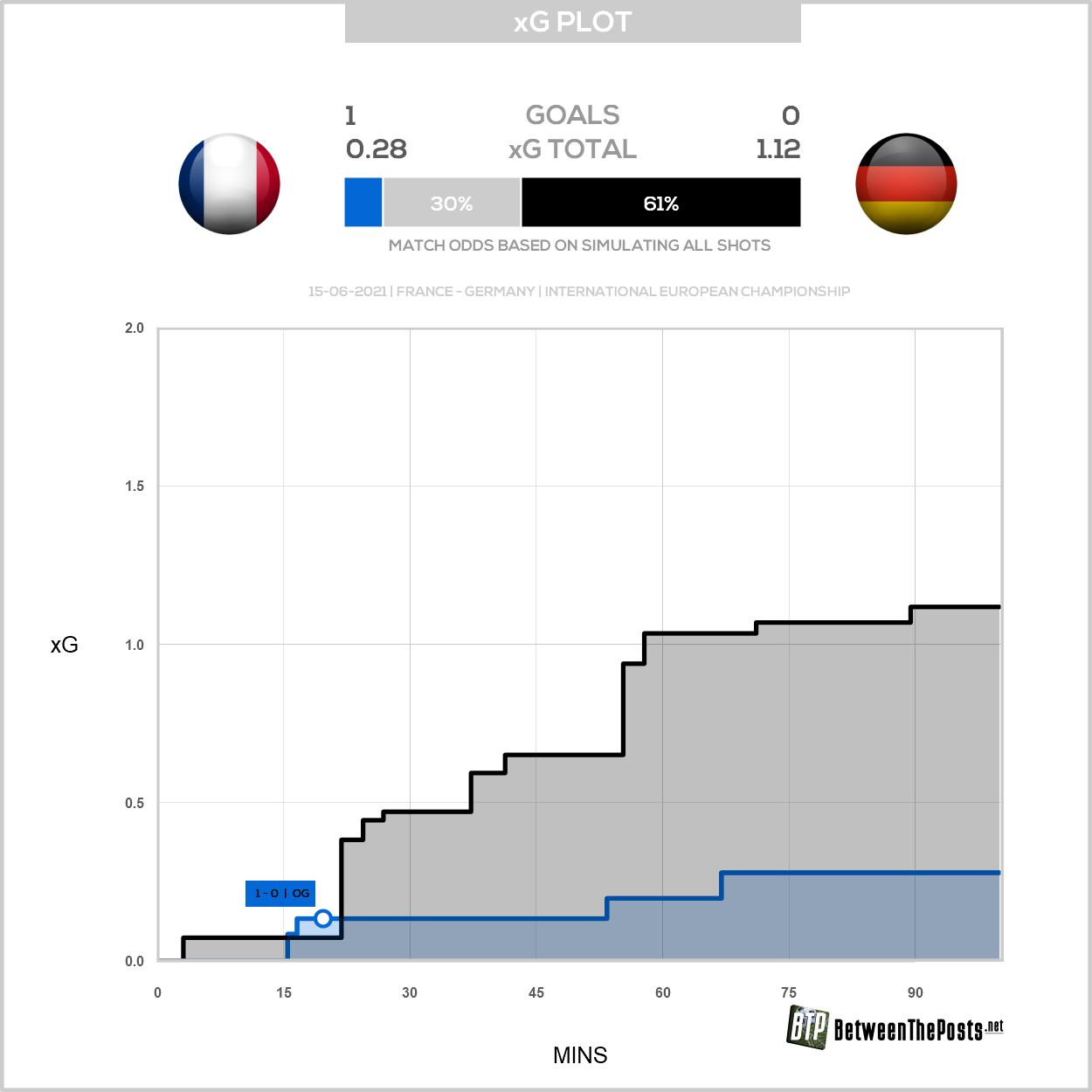 Despite Germany’s need to draw the game, the second half was surprisingly uneventful, with just four shots from Germany versus two from France. Having bagged the goal they needed in the first half, the French successfully prevented their opponents from creating dangerous chances in the box afterward and closed out the game rather calmly.

Many analysts and fans seem disgusted because a team with so much talent as France does not play more expansive football. However, as much as people might hate Deschamps’ game plan, there is no denying that their players can execute very well and that several of France’s key players – Varane, Pogba, Kanté, Mbappé – shine in this setup.

On the other hand, Löw’s Germany still looks like a team without a well-defined game plan and identity, with Löw struggling to find a setup that makes the most of his squad talent. Kimmich saw his influence reduced by playing on the wing. At the same time, Kroos and Gündoğan couldn’t go forward and have a more significant impact in the final third from their double pivot roles, and the front three looked narrow, with Müller, Gnabry, and Havertz stepping on each other’s toes. Löw and Germany still have a lot of work to do to survive this group of death and challenge for the title. 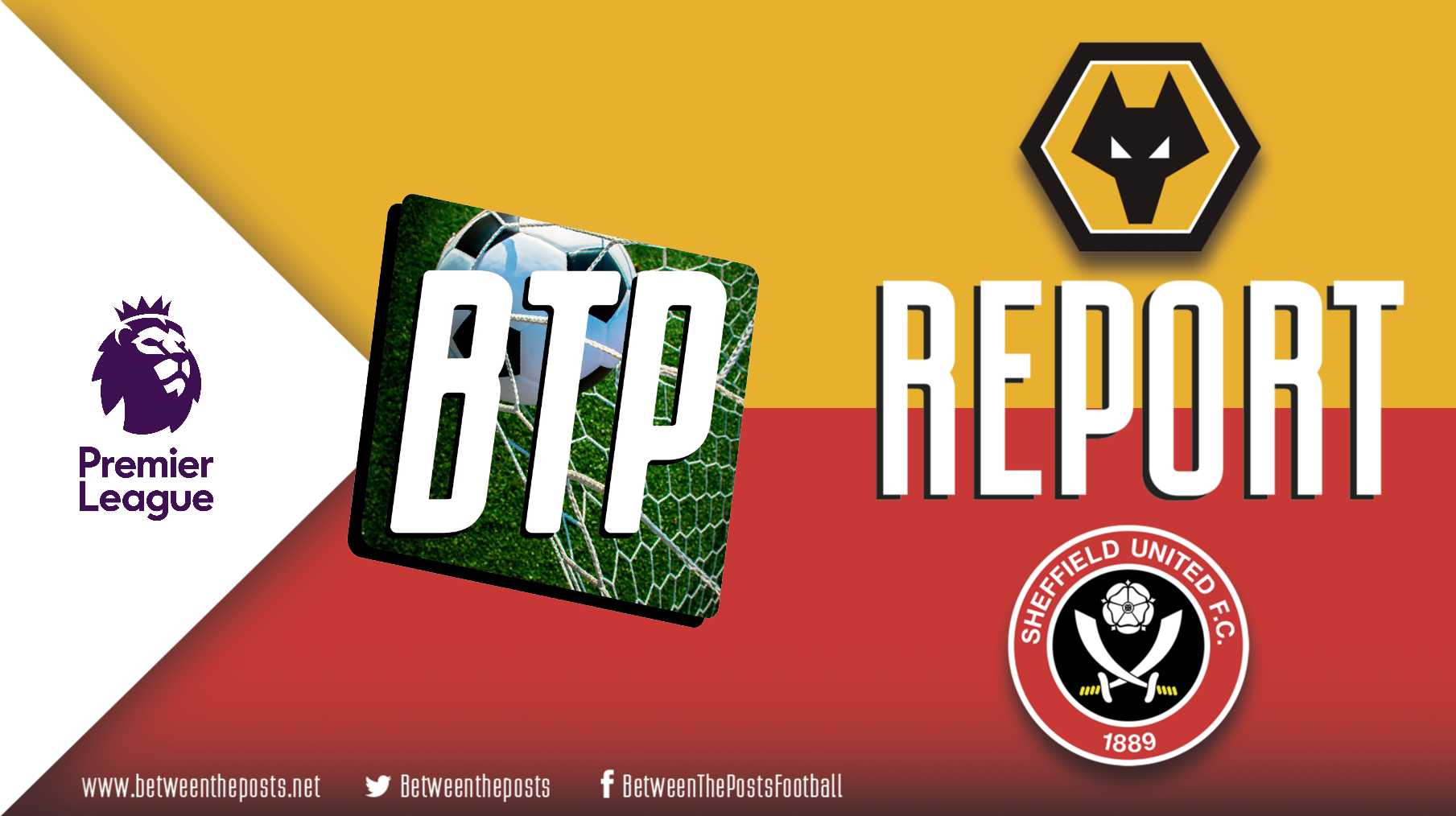