France became the first Men’s World Cup defending champions in sixteen years to appear in the knockouts as they took on Poland in the Round of Sixteen. They were the clear favorites for this match, and although they took a while to get going, they brushed their opponents aside once they did.

The curse of the champions did not seem to affect France at all, as they got through the group stage within two matches by defeating Australia and Denmark. That enabled them to rest most of their first-choice lineup in the third match against Tunisia, so they would have been fit and raring to go for the knockouts. Their objective: to become the first Men’s team to lift successive World Cup titles since 1962.

Quite contrastingly, Poland had qualified for the knockouts for the first time since 1986 at the Men’s World Cup, so they were happy to be here in a sense. They had just about scraped through their group on goal difference ahead of Mexico and Saudi Arabia, but advancing any further than the Round of Sixteen was going to take something very special.

France were back to full strength and returned to their 4-2-3-1 formation on paper, so Hugo Lloris was in goal behind Jules Koundé, Raphaël Varane, Dayot Upamecano and Theo Hernández. Aurélien Tchouaméni joined Adrien Rabiot in midfield with Antoine Griezmann ahead of them, whilst Ousmane Dembélé, Olivier Giroud and Kylian Mbappé formed the front three.

As they had done against Argentina, Poland lined up in a 4-1-4-1 formation. Penalty-specialist Wojciech Szczęsny started between the sticks with Matty Cash, Kamil Glik, Jakub Kiwior and Bartosz Bereszyński ahead of him. Grzegorz Krychowiak had Piotr Zieliński and Sebastian Szymański on either side of him in midfield whilst Przemysław Frankowski and Jakub Kamiński started out wide. Robert Lewandowski was alone up top again.

Even though they kept a couple of clean sheets, Poland’s defending was far from convincing in the group stage as they conceded the fourth-highest Expected Goals tally. France’s forwards would have been licking their lips going into this fixture, but they would face a much more tightened up defense.

Poland were set up in a 4-5-1 medium block, with the two lines staying quite close to one another so as to limit the spaces open between them. The two number eights followed their French counterparts around for the most part, whilst wide attackers tracked back a lot to support their fullbacks whenever the ball went out to their side. 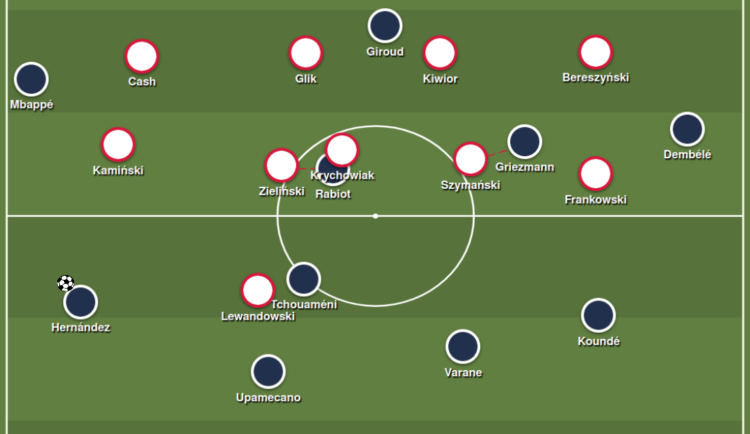 In the first half an hour, France only managed to fire five shots, and three of those were from outside the box. Of the two from inside, one came from a set-piece, whilst the other originated from a relatively tight angle. On the whole, Poland would have been pretty pleased about their defensive performance till that point.

Poland allowed to keep possession, but struggle to make much of it

In terms of possession, the match was a lot more even than the gulf of quality between the two sides would lead one to expect, as France kept under 55% of the ball. That was completely intentional on their part, as they were often  happy to let the opposition keep the ball and drop into a 4-4-2 defensive shape.

Poland did not really seem prepared for this possibility, as their possession-play did not look great. Their center-backs were given a good deal of time on the ball, but they spent most of it passing among themselves, finding a midfielder who had dropped deep or going back to the keeper, who would then hoof it away under pressure. 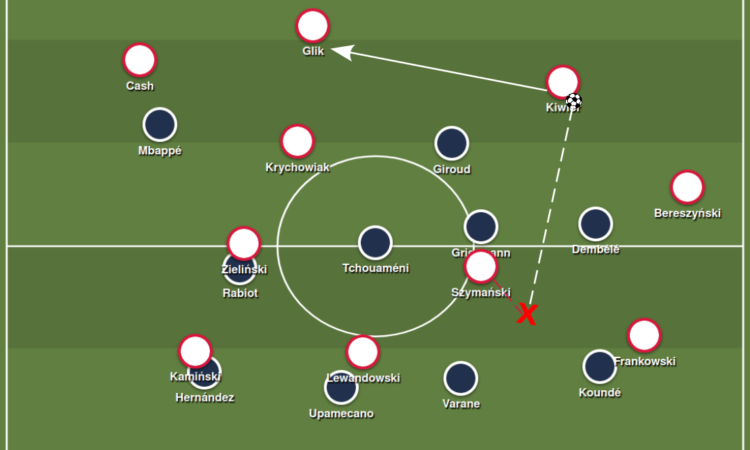 33rd minute: A sequence that sums up Poland’s approach in possession: Kiwior does not play an incisive pass into the run of Szymański, turning around and finding Glik instead.

The only reason Poland were able to get into the opposition half, therefore, was the fact that France’s defensive block dropped back and invited Poland forward, seeking to lure them in, turn the ball over and then counterattack. Of course, they defended their box pretty well and did not really look threatened when Poland had sustained possession. The defending champions did concede one big chance after a throw in on the left, but Varane bailed them out with a goal-line clearance.

A few minutes later, Poland were made to rue this miss even further as France went and took the lead up at the other end. Olivier Giroud was the man who got the goal with a smart run and sublime finish, becoming the French men’s team’s all-time leading goalscorer in the process.

As the second half wore on, Poland had to adopt a more attacking approach and search for an equalizer. The simplest way to do that is to chuck an extra striker on, which is exactly what Czesław Michniewicz did in the 64th minute by sending on Arkadiusz Milik. As a consequence, Poland had to commit more bodies forwardin way of attack and risk being exposed on the counterattack. Unfortunately for them, such situations are exactly what France’s front men excel at.

📺💻📱 Watch on @BBCOne, @BBCiPlayer and the @BBCSport app.#BBCFootball #BBCWorldCup pic.twitter.com/iFQukJwCEs

Mbappé went on to add a third in stoppage-time with another sensational finish from the left, this time aimed at the far post. Lewandowski did pull one back from the spot with what was the last meaningful kick of the game, so that was far too late to stop France from celebrating a comfortable win. 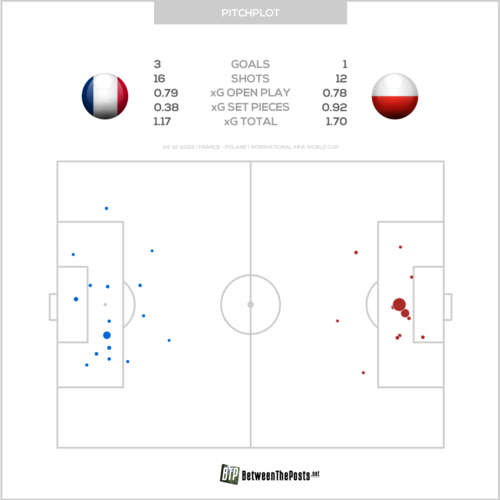 As aforementioned, Poland had already exceeded expectations to a certain degree by qualifying for the knockouts, and nothing was expected of them against France. Their progress will make this look like a successful tournament on paper, but in reality, their performances have not been great, so there is a good deal of scope for introspection for them.

France’s display, meanwhile, reinforced what we saw in the first two group games. Although they are yet to keep a clean sheet at this World Cup, their defense looks fairly solid, they have proven themselves capable of patiently breaking down most defensive blocks, and above all, they are deadly on the counterattack and have some clinical forwards to deal damage up front. That is quite a good winning formula for knockout tournament football. 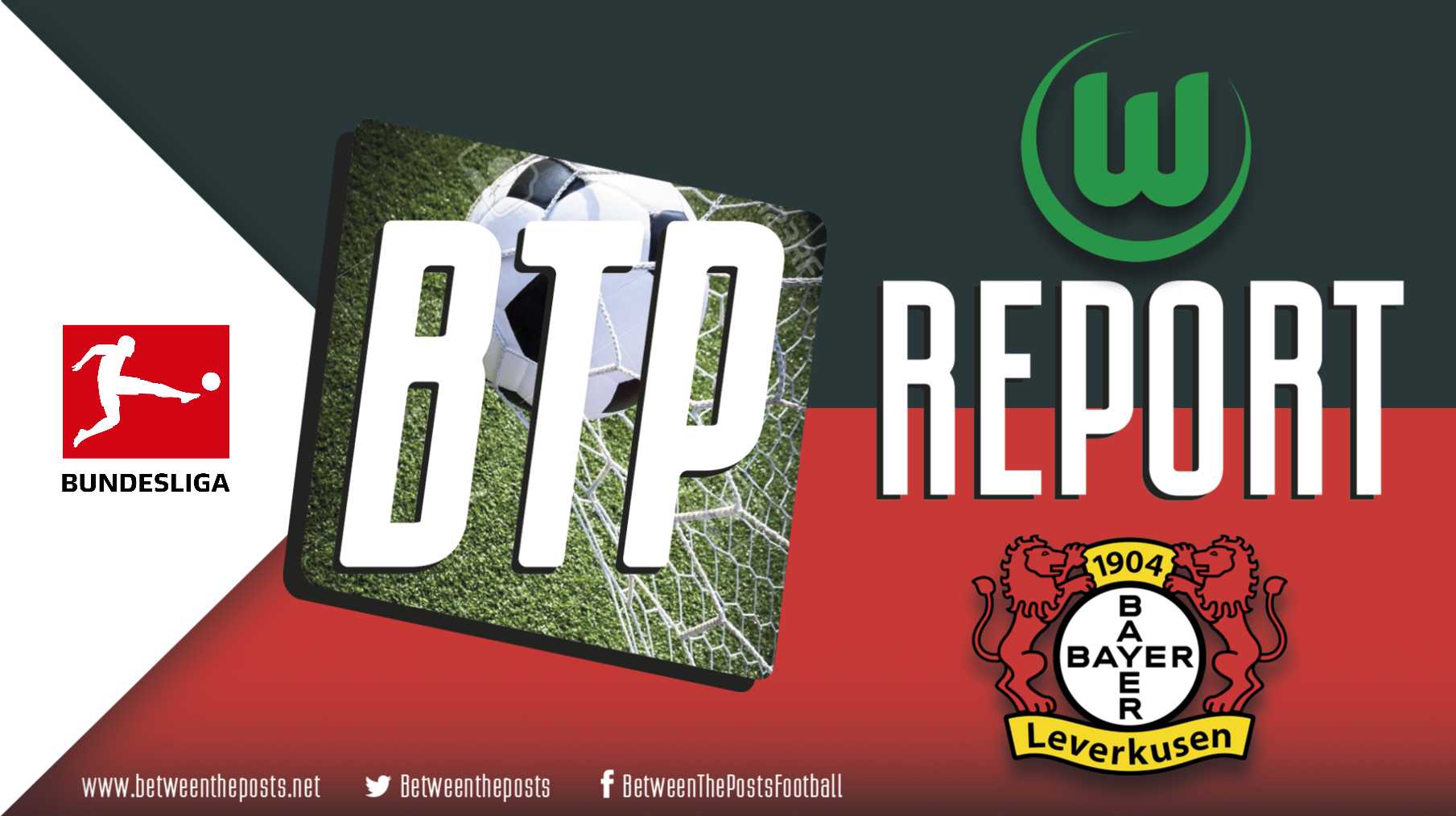