Huddersfield took the initiative early on but failed to damage a conservative but more direct Fulham side. In the second half, Fulham became more aggressive and dominated the game. After a penalty miss by Kamara, it seemed that their efforts would go to waste but Sessegnon and Mitrović saved the day for Fulham.

Unlike your typical promoted side, Fulham aimed to control possession and win games on the offense. To make their playing style competitive in the Premier League, owner Shahid Khan funded an over one hundred million euro overhaul of the squad. Many expected Fulham to be just like fellow promoted side Wolves and comfortably avoid the relegation, but reality begs to differ.

Under – now former – manager Slavisa Jokanović, Fulham were by far the worst defense in the league. They conceded grand total of 31 goals in twelve games (2.5 per game), in line with their expected goals conceded. A lot of the defensive issues came from the failures of Fulham’s counterpressing game, a defensive requirement for a possession-oriented side. Furthermore, Fulham could not compensate these defensive woes through their attack, which has been, at best, below average.

With a disaster in his hands, Jokanović was sacked after matchday twelve and replaced by Claudio Rainieri. The experienced Italian has turned Fulham into a stronger defensive unit, with Fulham conceding a more respectable twelve goals in eight games (1.5 goals per game). The offense is still a work in progress, carried by a reliable Mitrović who has scored or assisted more than half of Fulham’s goals this season.

Huddersfield Town: the story of a relegation favorite

Huddersfield run on a very small budget and this is reflected in their squad, one of the least talented in the league. They are – by far – the worst offense of the league. They have perennial issues making it into the final third and the opponent’s box, being heavily reliant on playmaker Aaron Mooy for ball progression. To make things worse, they have also been inefficient finishers, with strikers Steven Mounié and Laurent Depoitre failing to score any goals in this first half of the season.

This offensive issue is not new, and Huddersfield survived the previous season mainly due to their solid defense. Coach David Wagner has built an interesting defense that mixes low and medium blocks. Huddersfield usually let opponents play out from the back and become very intense once the opponent reaches the halfway line. This present season, however, defense might not be enough, and Huddersfield find themselves, deservedly, in relegation spots.

Over the last few games, Ranieri has decided to drop his usual 4-4-2 / 4-2-3-1 formation in favor of a back three. Against Huddersfield, Rainieri went for a 3-4-1-2 shape, with Sergio Rico at goal and Denis Odoi, Alfie Mawson and Tim Ream as central defenders. Cyrus Christie and Joe Bryan played the wingback roles.

In central midfield, Jean-Michaël Seri was accompanied by Calum Chambers—usually a central defender—who is replacing the injured André Anguissa. Tom Cairney played in a more advanced midfield role ahead of this double pivot. Up front, a striker duo of Mitrović and Luciano Vietto. Surprisingly, Ryan Sessegnon and André Schürrle—the usual starting attackers—were left on the bench for this vital game. 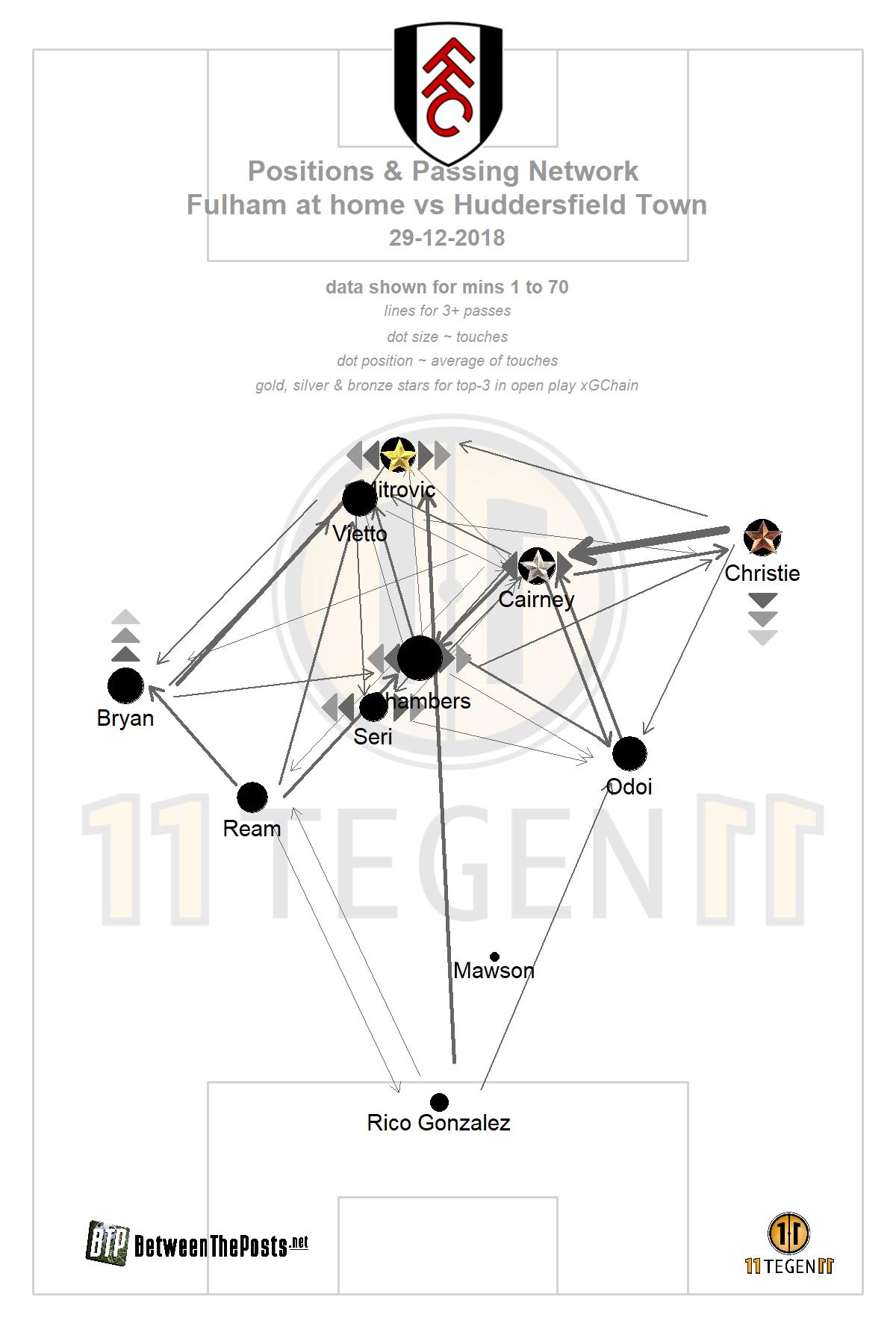 The passmap shows that Calum Chambers played an important role as the main passer in deep midfield for Fulham.

Huddersfield went for the conservative 3-5-1-1 shape that they often take in their games against the English top six sides. Keeper Jonas Lössl was guarded by central defenders Mathias Jørgensen, Christopher Schindler, and Terence Kongolo. On the wings played Chris Löwe and the multi-functional Erik Durm. Central midfield featured an industrious trio of Jonathan Hogg, Philip Billing and Florent Hadergjonaj. The key absence is definitely playmaker Aaron Mooy, who is injured. Up front featured lone striker Steve Mounie with Alex Pritchard behind him as a number ten.

This was never going to be a high-scoring game, since both defenses were better than the offenses they faced. Both teams often looked to get long balls to their center forwards (Mounie for Huddersfield, Mitrović for Fulham) or switched play to the wings to find crosses into the box. Both Mounie and Mitrović were outstanding in the air, winning over seventy percent of their aerial duels.

Fulham was the home side, but they gladly ceded possession to Huddersfield, who had sixty-five percent of possession during the first half. Fulham mostly let Huddersfield play out from the back, waiting for them in a well-organized 5-2-3 low block shape. A low block refers to a team that retreats deep in their own half out of possession, generally only disrupting their opponents around their own box. Cairney, Vietto and Mitrović would sometimes push up to press Huddersfield’s back three, but midfielder Jonathan Hogg would then drop deeper to help his teammates. 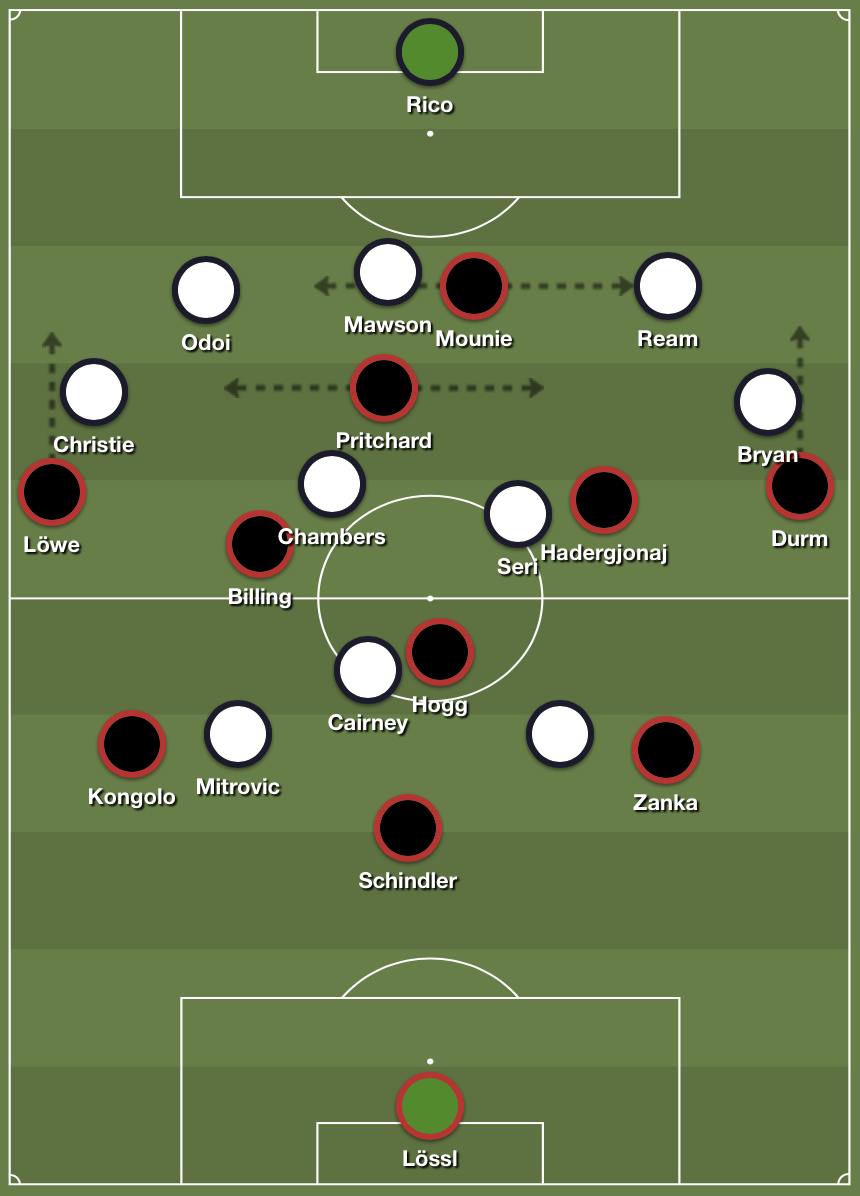 Despite all their time on the ball, Huddersfield struggled to cross the midfield line and create chances, constantly stopped by Fulham’s defensive block. In this respect, the absence of playmaker Mooy did not help. With no other option, Huddersfield were often forced to shoot from a distance.

Fulham were comfortable without the ball and were noticeably more direct than Huddersfield when on the ball. While Huddersfield would try to move the ball around the back for a while, Fulham wasted no time in sending the ball to Mitrović. Meanwhile, Cairney and Seri switched play to the wings, while Vietto roamed around trying to exchange passes with wing backs and midfielders. Despite being the more talented side, Fulham also struggled to break down their opponent’s solid defense.

Fulham increase the intensity in the second half

The second half was dominated by Fulham, who not only had most of ball possession but also outshot Huddersfield by ten shots to three, which include a missed penalty and a big chance.

Kamara produced a lot from the right wing, overloading Huddersfield with right wingback Cyrus Christie and constantly dividing the attentions of Huddersfield defenders. This gave Mitrović more time and space in the box, and also allowed Fulham to pick up more second balls that resulted from Mitrović’s aerial duels.

The Kamara substitution allowed Cairney to play in his preferred deeper role. Cairney became the center of his team’s renewed possession game, moving to exchange passes with every midfielder and forward as well as switching play to the wings. This was helped by a more aggressive Fulham press, in which both Cairney and Chambers pushed up to stifle Huddersfield’s attempts to play out from the back. 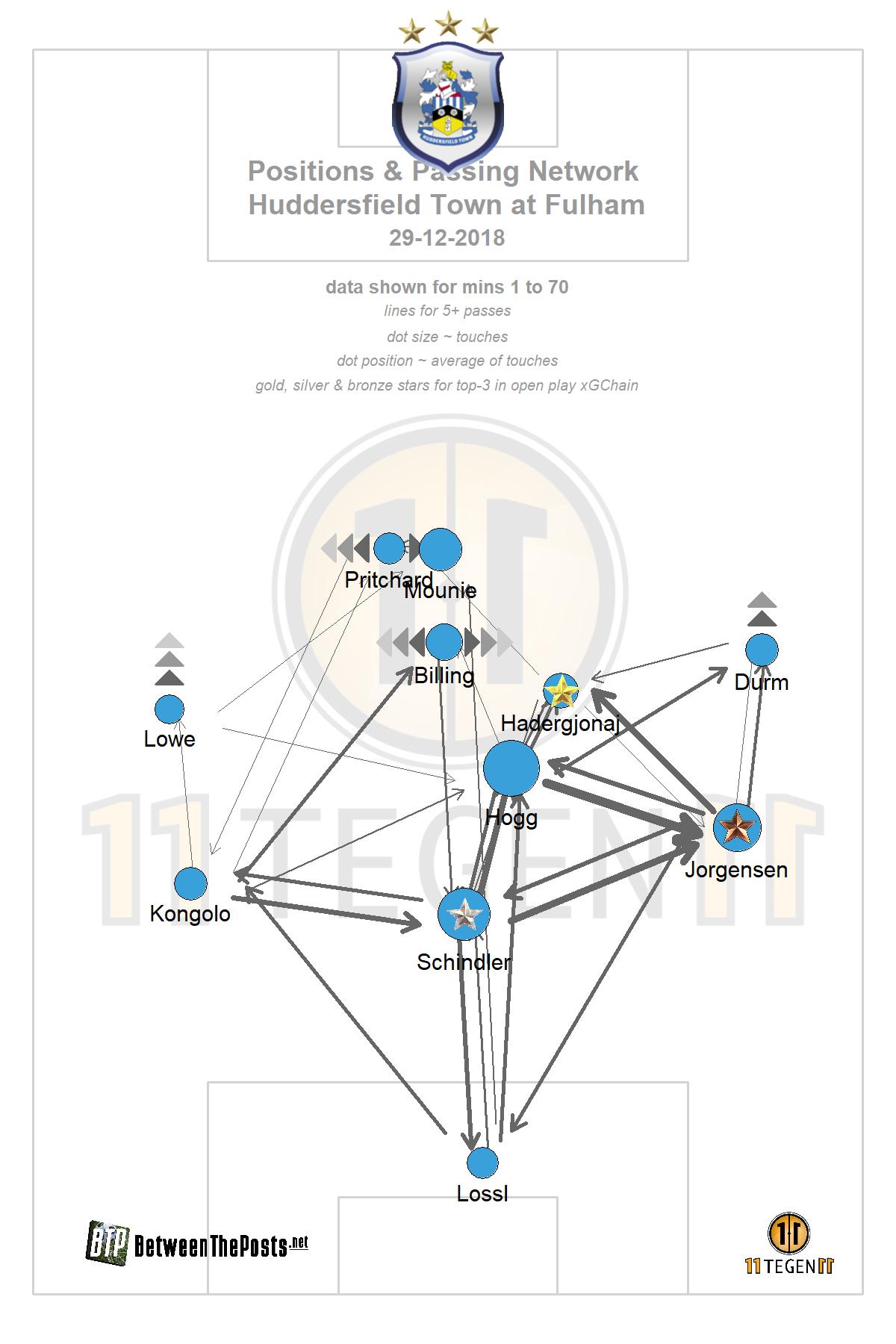 Huddersfield’s deep stance is immediately clear from this passmap, and how much trouble they had to reach to offensive zone.

Wagner reacted conservatively to Fulham’s dominance, not changing his team’s approach or shape. He only replaced forwards Mounié and Pritchard for Laurent Depoitre and Elias Kachinga. No change in positions and roles, only fresher legs in the attack.

By the 77th minute, Rainieri tried to further strengthen his attack by replacing a tired Vietto with left winger Ryan Sessegnon. The young winger was even more active than Vietto at getting into goal scoring positions, trying to load the box every time a cross came in from the right.

Fulham’s insistence finally led to a handball in Huddersfield’s box. Kamara missed the ensuing penalty after taking the ball away from Mitrović, the designated penalty taker.

Emboldened by the penalty miss, Huddersfield tried to attack more actively, but this left more spaces behind their defense and would ultimately lead to their downfall. In the first minute of injury time, Cairney picked up a bounce off his defense and launched Sessegnon into a counterattack. The skillful winger unleashed a sharp through ball past Huddersfield defense into Mitrović, who brilliantly slotted the ball into Huddersfield’s net with his first touch.

Even if Fulham had not scored that goal, there would still have been many positives to take home. Rainieri and his players have built a respectable defensive foundation, with the team now actually capable of keeping a clean sheet (even if it was against the worst offense in the league). Offense is still a work in progress, but Fulham’s second half reaction gives some future hope in this regard. Even if the offense does not improve significantly, though, this solid defense plus a healthy, in-form Mitrović might just be enough to save Fulham from relegation.

Huddersfield and Wagner have built the team around a solid defense, but this might not be enough to keep in them in the Premier League. Even if they took the initiative at the start of the game, they failed to be a genuine threat to Fulham. Even more worryingly, both the players and the coach seemed to have little reaction to Fulham’s second half dominance, only reacting after Fulham’s missed penalty. Apart from defense, Huddersfield seems to have nothing else that can save them from relegation. Unless they get some much-needed offensive signings during the winter, it seems that their only hope is that their luck and finishing efficiency can improve this second half of the season. 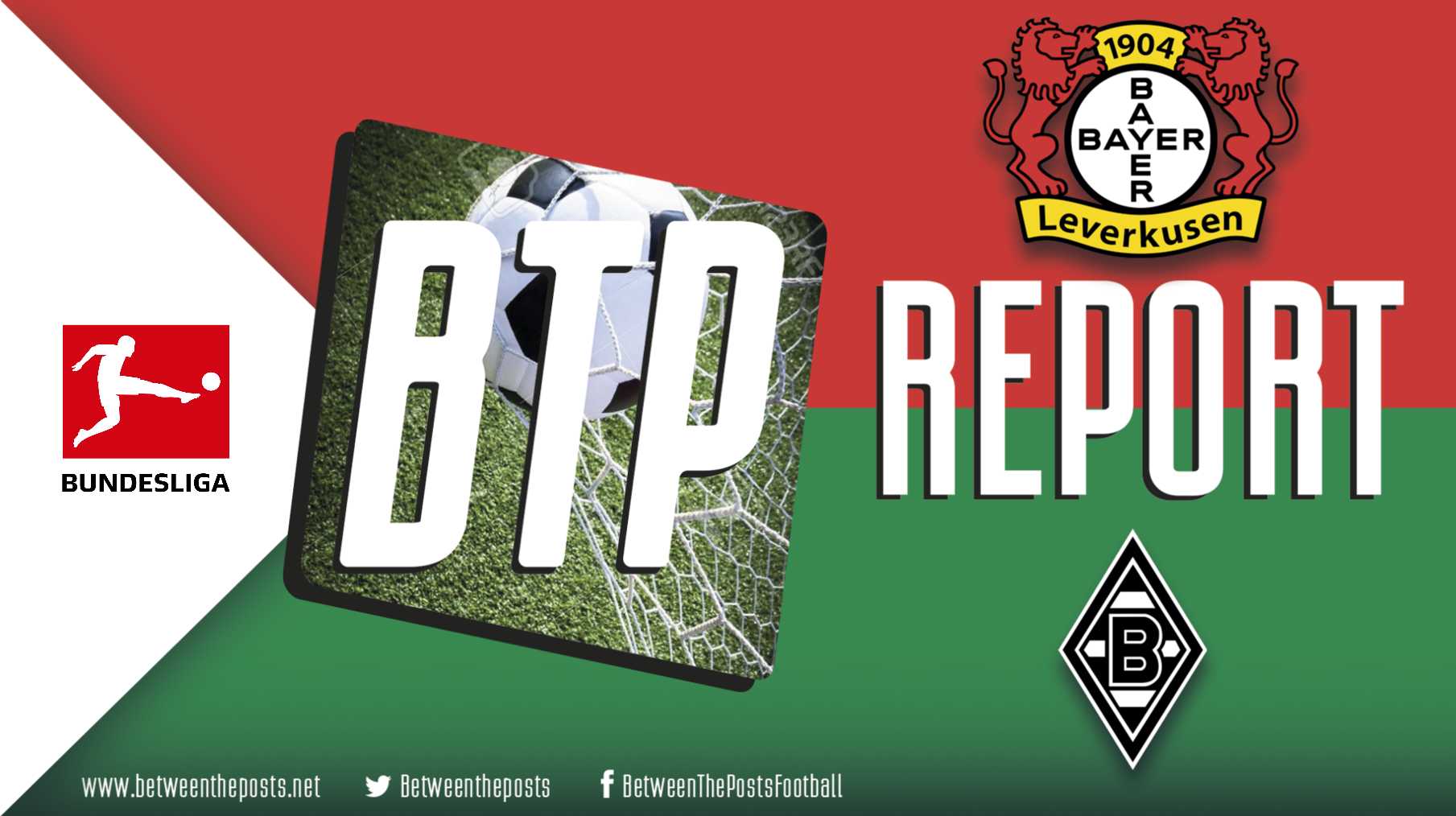 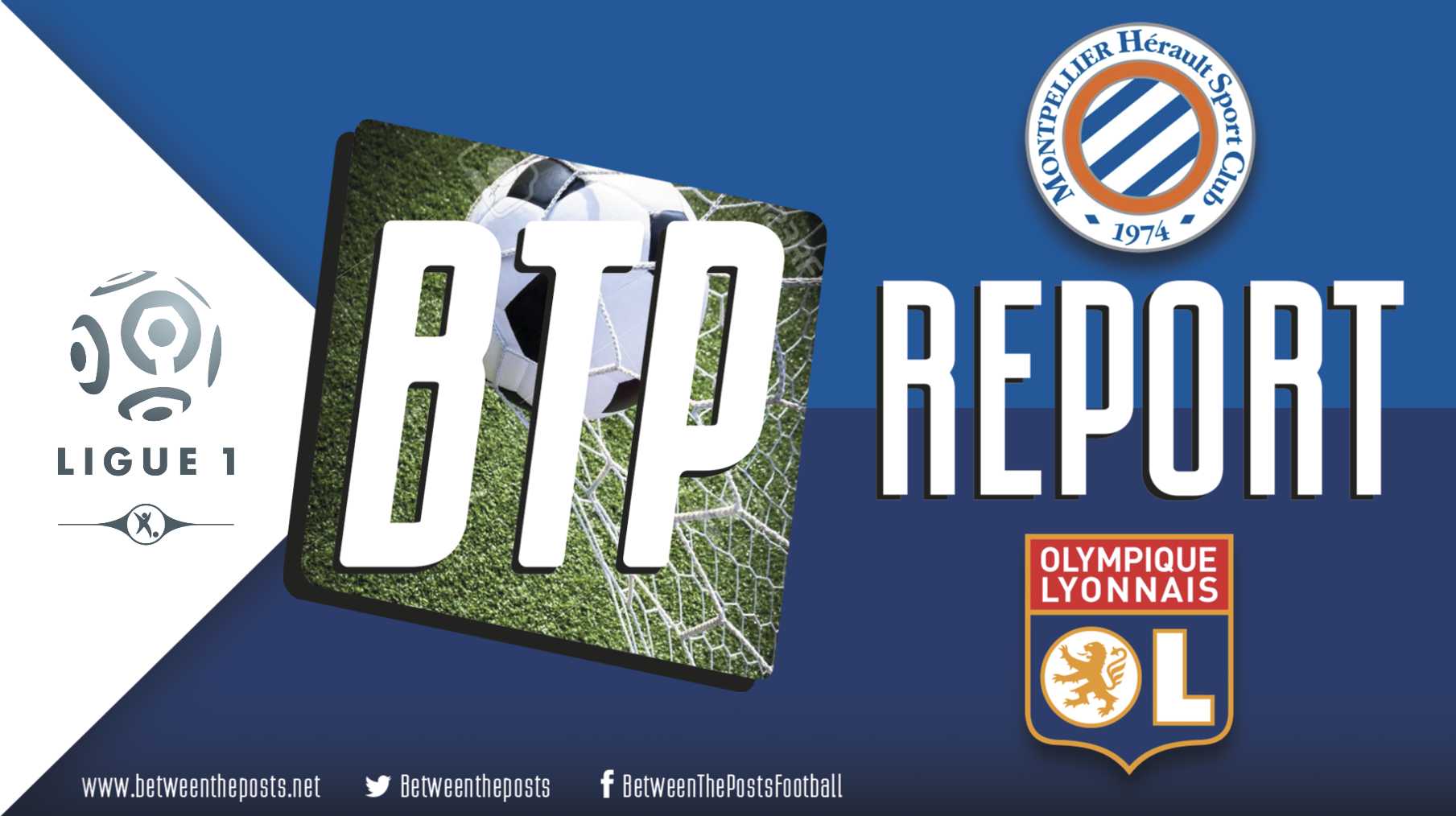