Germany famously fell victim to the curse of the champions in 2018 when they crashed out of Group F after losing their opening game against Mexico and failing to beat one of the 2002 hosts in South Korea. Both of those things have happened in 2022 as well now, as Japan started off their campaign with a famous win over the 2014 champions.

Since that triumph in 2014, Germany’s record in major tournaments has not been great. They did make it to the Euro semifinals in 2016, but were then knocked out of the group stage of the World Cup in 2018 and Round of Sixteen in Euro 2020. This was a chance for them to set things right in Hansi Flick’s first major international tournament as the main man.

They were drawn in a tough group that included Spain as well as Japan, who were in the top 25 of the FIFA rankings and impressed at the last World Cup until their heartbreaking extra time defeat to Belgium in the Round of Sixteen. Hajime Moriyasu was the assistant head coach in that tournament and was promoted in its aftermath as Akira Nishino stepped down. His first-ever international tournament as a head coach went fairly well as Japan finished runners-up to Qatar in the 2019 Asian Cup, so he was looking to build on that with a strong World Cup campaign.

Germany set out in Flick’s favoured 4-2-3-1 formation. Manuel Neuer was in goal behind Niklas Süle, Antonio Rüdiger, Nico Schlotterbeck and David Raum. Joshua Kimmich was joined by İlkay Gündoğan in midfield, whilst Thomas Müller had Serge Gnabry and Jamal Musiala on either side of him behind Kai Havertz up front.

Japan’s also used a 4-2-3-1 formation with Shuichi Gonda between the sticks. Takehiro Tomiyasu was not fully fit so Hiroki Sakai started at right back alongside Ko Itakura, Maya Yoshida and Yuto Nagatoma in defense. Wataru Endo joined Ao Tanaka in midfield, Junya Ito and Takefusa Kubo were on the flanks, and Daichi Kamada was behind Daizen Maeda in attack.

Germany dominate the first half thanks to attacking overloads

All the drama kicked off well into the second half, but at half-time, Germany looked to be on course for a routine victory. Yes, they did suffer a couple of scares, most notably Maeda’s offside goal, but for the most part, they were utterly dominant in the second half. They kept just over 80% of possession, outshot Japan 14-1 and created chances worth close to 1.5 xG in total.

Their asymmetric 3-2-5 structure in possession was the key to their success against Japan’s 4-4-2 defensive block. With Süle operating as an auxiliary fullback, they were able to create a numerical advantage in the first line, whilst Neuer’s on-ball qualities also aided their buildups. Kimmich and Gündoğan regularly received the ball in pockets of space in midfield as Müller and Musiala pulled their Japanese counterparts away, whilst Raum’s advances on the left proved very dangerous. 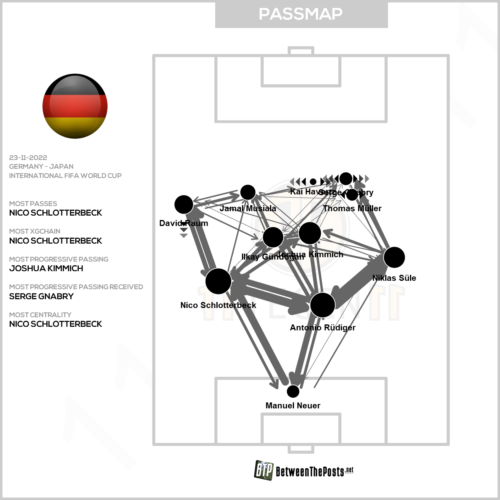 All of the aforementioned movements show up quite clearly in Germany’s passmap, which is testament to the fact that the players executed Flick’s gameplan in possession well.

This front five proved particularly problematic for Japan’s back four, which naturally struggled to deal with this numerical disadvantage. Raum was left free most often at the end of his forward runs on the left, especially after his teammates developed play down the right.

Indeed, that is how the penalty was one prior to the opening goal, as Kimmich picked out Raum’s run to the box with a pinpoint chipped pass. 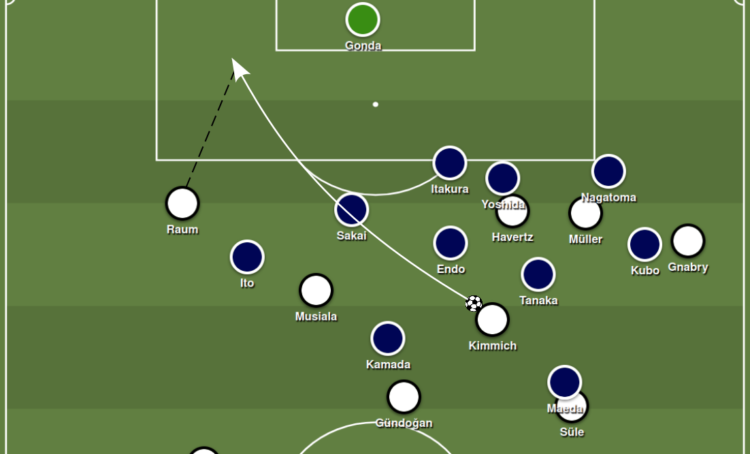 At half-time, Moriyasu brought Kubo off for Tomiyasu as Japan switched to a 3-4-3/5-4-1 formation. This switch made the match a lot more even, as Germany’s possession figure dropped to about 65%, but more importantly, Japan started to look dangerous on the break as well as the second half shot count read 12-11.

Part of the reason behind their improvement was their changed defensive approach, which focused on keeping Germany away from their goal. The 5-4-1 shape out of possession was naturally able to contain Germany’s structure much better as it enabled them to go player-for-player, which in turn allowed them to defend higher up the pitch with a relatively good amount of security. 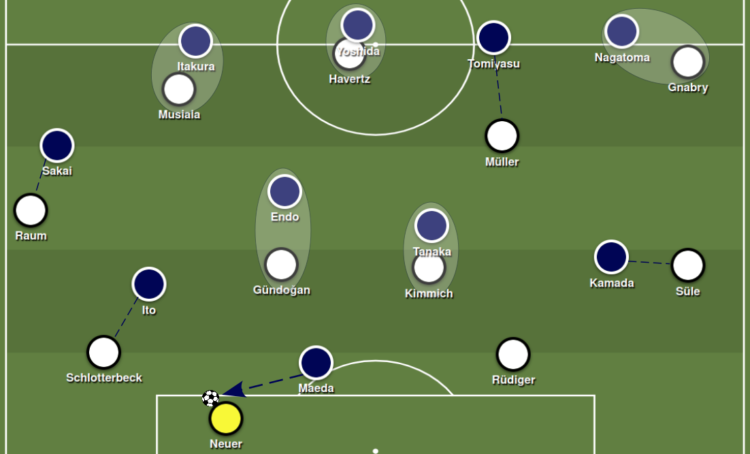 56th minute: Japan go player-to-player as they defend against Germany in a high block.

At the same time, it should be said that Germany really felt the absence of an out-and-out number nine. This was the case not just because they missed a number of presentable chances, but also because they lacked a runner in behind to stretch Japan’s high block, and also did not have a regular box presence to aim for with their crosses. If they had a player who could do those things, they could well have sealed the game in the first half, and if not, certainly threatened much more after Japan’s tactical changes in the second.

Moriyasu’s half-time substitution and consequent tactical adjustments kept his side in the game, but they still had to go and win it. He made further substitutions for that exact purpose, which eventually paid off.

Just a few minutes after coming on, Ritsu Doan equalized by turning in a rebound after some nice play down the Japanese left. There still was a quarter of an hour of regular time left to play which Germany would have been eyeing to retake the lead, but their plans would be thwarted in some fashion in the 83rd minute. A defensive lapse allowed Takuma Asano to get in behind, and the formal Arsenal man did the rest in clinical fashion.

The touch 👌
The finish 🚀

Japan are BEATING Germany thanks to Takuma Asano 😱 pic.twitter.com/9emat3vyB2

Much like the winning goal, this was a smash-and-grab victory for Japan, but given how dominant Germany looked, they do deserve credit for even being in a position to take advantage in this manner. 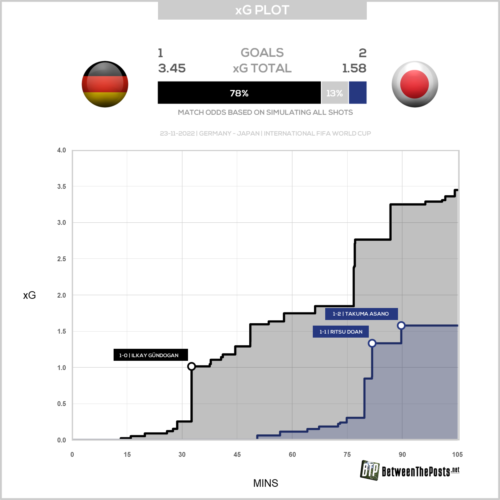 Tournament football at its best.

This is a win that will live long in the memory of Japanese fans, but more importantly in the context of this competition, one that gives them a glorious chance of reaching the knockouts for the third time in their last four attempts. A win over Costa Rica on Sunday followed by a favourable result in the other group match would do the job for them with a game to spare.

That other group game is a huge fixture between Germany and Spain, who look formidable after scoring seven times in their tournament opener. Germany will really need to find a way to contain them as well as breach their defense that is yet to even allow a shot on goal. That is because Flick’s men will likely be playing to stay in the competition, just as they were doing against Sweden just over four years ago. 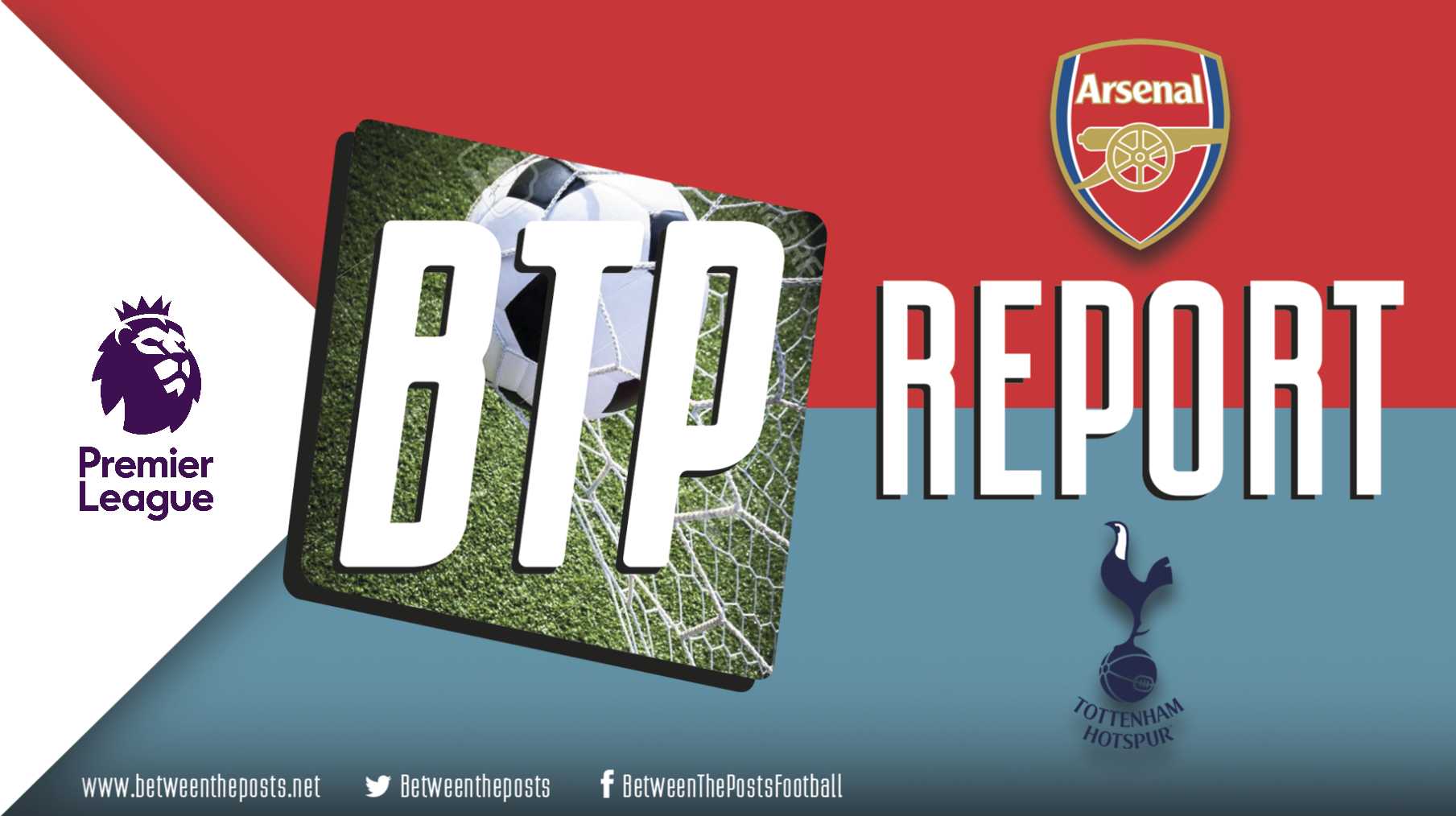 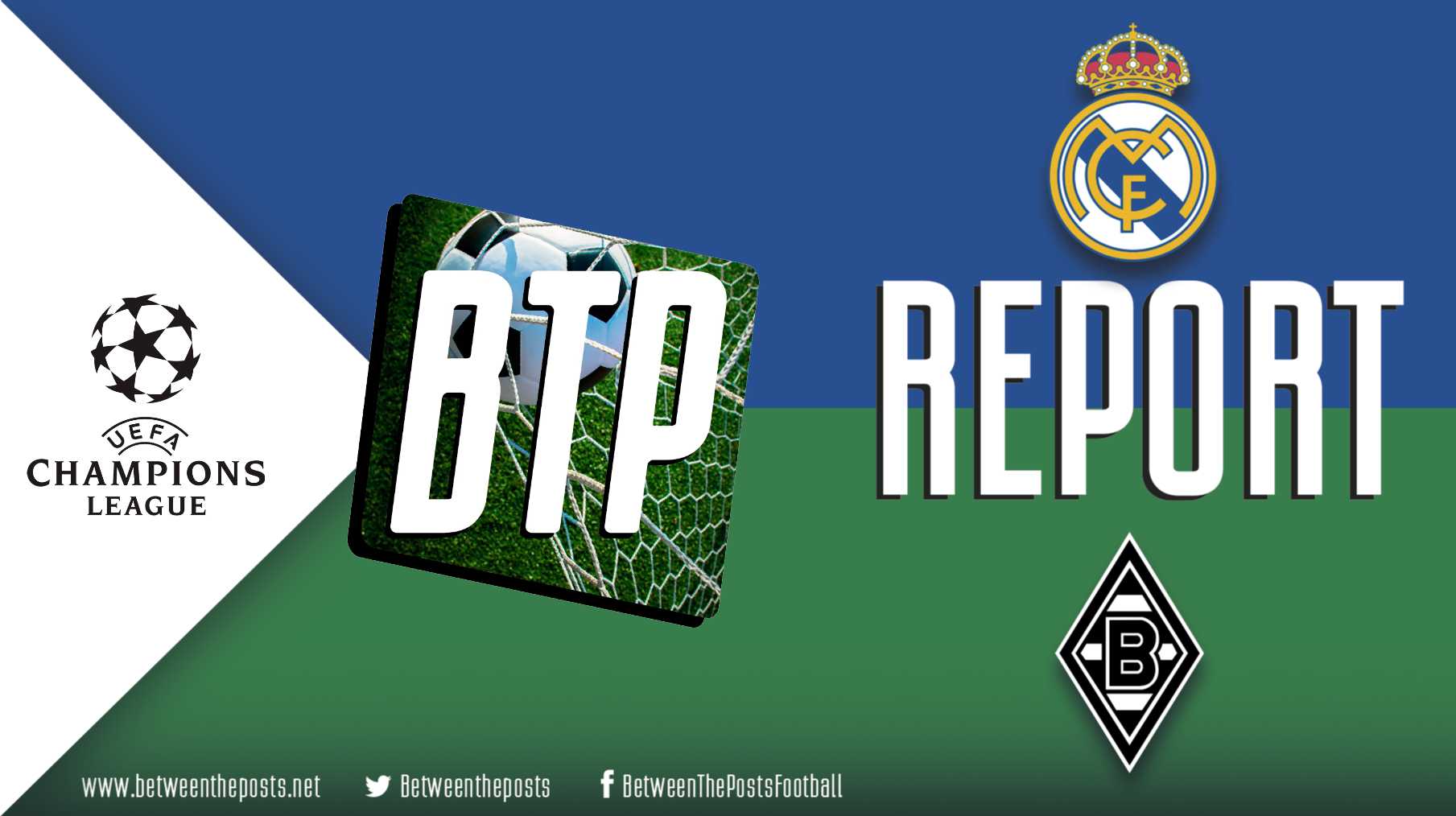