Getafe came out with a plan to press and block Barcelona for as long as they could, while making the most of whatever possession they could get. For large parts of the game this worked, but individual ability, good game management and a bit of luck was enough for the champions to extend their lead at the top of LaLiga.

Getafe have been one of the surprise teams in LaLiga so far and found themselves in seventh place going into this game. A style based on defensive solidity has allowed them to punch above their weight and give any team a hard time. Against Barcelona, they set up in their usual 4-4-2 formation, with Jaime Mata and Ángel up front. Their other key striker, Jorge Molina, was left on the bench.

Barcelona have had a season of mixed emotions. On one hand, they find themselves top of the league and are favorites to retain the title. But on the other, performances have dipped from last season and Ernesto Valverde remains under pressure to strike a productive balance with an aging squad. Luis Suárez led the lines at Getafe with Ousmane Dembélé and Lionel Messi flanking him on either side. A staggered midfield of Ivan Rakitić, Arthur and Arturo Vidal backed up the three-pronged attack.

While Valverde’s side lined up in a 4-3-3 on paper, their formation in possession was something else entirely. Rakitić dropped between the two center-backs who split wide to form a back three. Arthur dropped frequently to fill the vacant pivot role while Vidal tended to stay slightly higher up. Dembélé played as an inside forward, almost as the third midfielder, while Suaréz played as the central focal point up front. Messi, as usual, played a free role with a loose connection to the right wing. 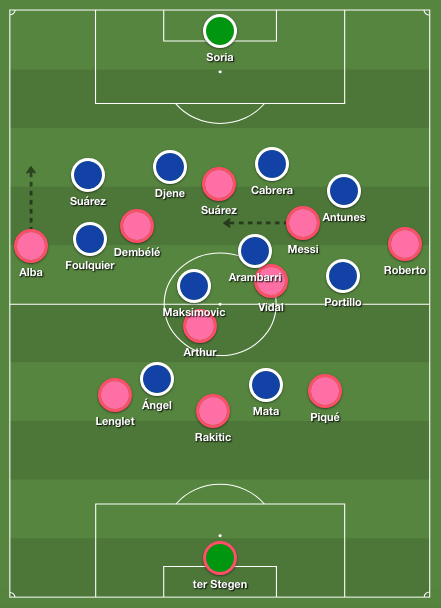 The result was a system that could potentially be described as a lopsided 3-4-3 or maybe even a 3-5-2. This stretched the 4-4-2 shape put up by Getafe in some strange ways. The home side’s front two pressed Barcelona two central defenders and Rakitić while one of the double pivot stepped out to Arthur whenever he dropped deeper. This created a 4-3-1-2 defensive formation in some of Barcelona’s early buildup phases.

What created the most problems for Getafe though, was the position of Dembélé. The Frenchman’s inside forward position tied up and dragged inward Getafe’s right midfielder Dimitri Foulquier. This meant that the aggressively positioned Jordi Alba was often isolated one-against-one with Getafe right back Damián Suárez. Long diagonals, balls over the top and various other passes gave Alba the opportunity to exploit a potential qualitative advantage and break through on the wing.

Messi was usually more central than Dembélé, often between the opponent’s central midfielders trying to open passing lanes to receive in the space between the lines. Exactly what you would like. Other times he was much deeper, linking play towards the more traditional forwards.

Getafe did a good job of marking the ‘‘fifth best player in the world’’ closely and, other than one-versus-one situations out wide, contained Barcelona effectively. Central compactness and occasional high pressing phases prevented smooth ball progression through the middle. Furthering this issue, Barcelona’s “attacking” midfielders were forced deeper to cover the space in front of defense left by Rakitić’s psuedo center-back role, making it more difficult for them to supply the frontline. 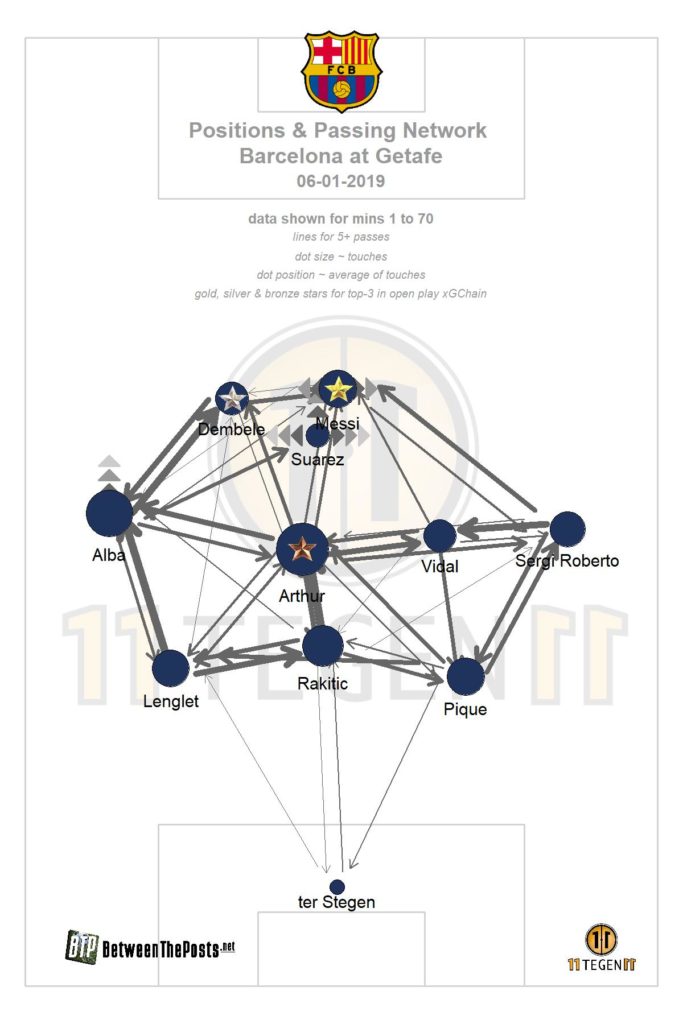 With all the tactical points of the game put aside, the visitors found themselves 2-0 up through the fantastic finishing ability of their star players. It has been somewhat of a trend so far this season that the team is bailed out by its fantastic players up front.

The first goal resulted from a sublime take by Messi who nutmegged the goalkeeper with his first touch and finished from a tight angle. The second came from an excellent Luis Suárez volley hit on the edge of the box during the second phase of a set piece.

The home side’s formation on the ball was remarkably generic. Two players out wide, two center-backs, two midfielders and two strikers, with virtually no strings attached. There are reasons very few teams play with such a system nowadays and it’s largely to do with the lack of occupation of central areas. With six players outside the opponent’s block, there is a tendency for sterile possession  Sterile possession means that a team controls possession for a spell of time, but fails to create actual goal scoring chances or offensive penetration with it. and incredibly wing-focused possession. 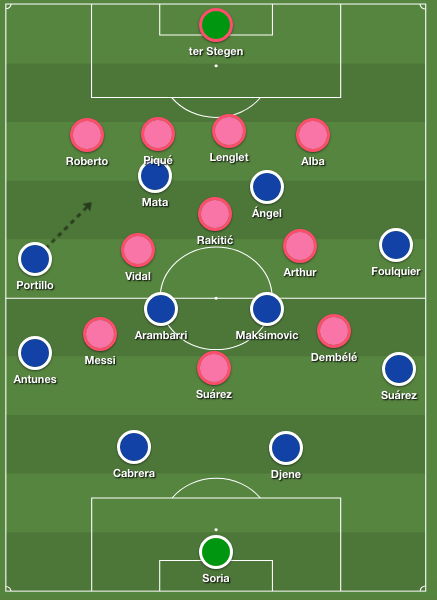 When the ball inevitably moved wide, Getafe were two-against-two with the wingers and fullbacks of both sides close to the touchline. They would try to combine their way to some kind of breakthrough with balls over the top and one-twos. The only exception to this predictable offensive strategy came from right winger Francisco Portillo. He could drift inward and offer a central passing option or cut in from the left with the ball at his feet and whip in an in-swinging cross.

Despite all of this, Getafe were able to create a few chances throughout the half. They were even able to produce the 2-1 just before half-time, as a cross was knocked back across goal from Ángel to Mata who buried the chance.

Bordalás rolls the dice as game opens up

The second half opened with a similar flavour to the first, as Barcelona dominated possession. In the 57th minute, Getafe manager José Bordalás brought on Jorge Molina for right winger Dimitri Foulquier. The latter is a right back by trade, while the former is a center-forward. It goes without saying that this was an extremely attacking substitution. Molina took up a role in the front two alongside Ángel. Mata moved to left wing and Portillo shifted to right wing.

The home side looked to counterattack aggressively whenever the ball was turned over. This either involved quickly playing in behind or using a series of vertical layoff passes to move the ball up the pitch. The substitute Molina played a brilliant through ball immediately after winning possession high up the pitch and Mata missed an open goal from the resulting opportunity.

More attacking intent from Getafe opened the door for Barcelona’s transition attacks. This was an environment that Dembélé thrived in. His ball carrying ability into open spaces puts him among the world’s best, while he also offers brilliant technical skill in one-versus-one scenarios. Said scenarios became more frequent as he was released into the space around opposition center-backs. 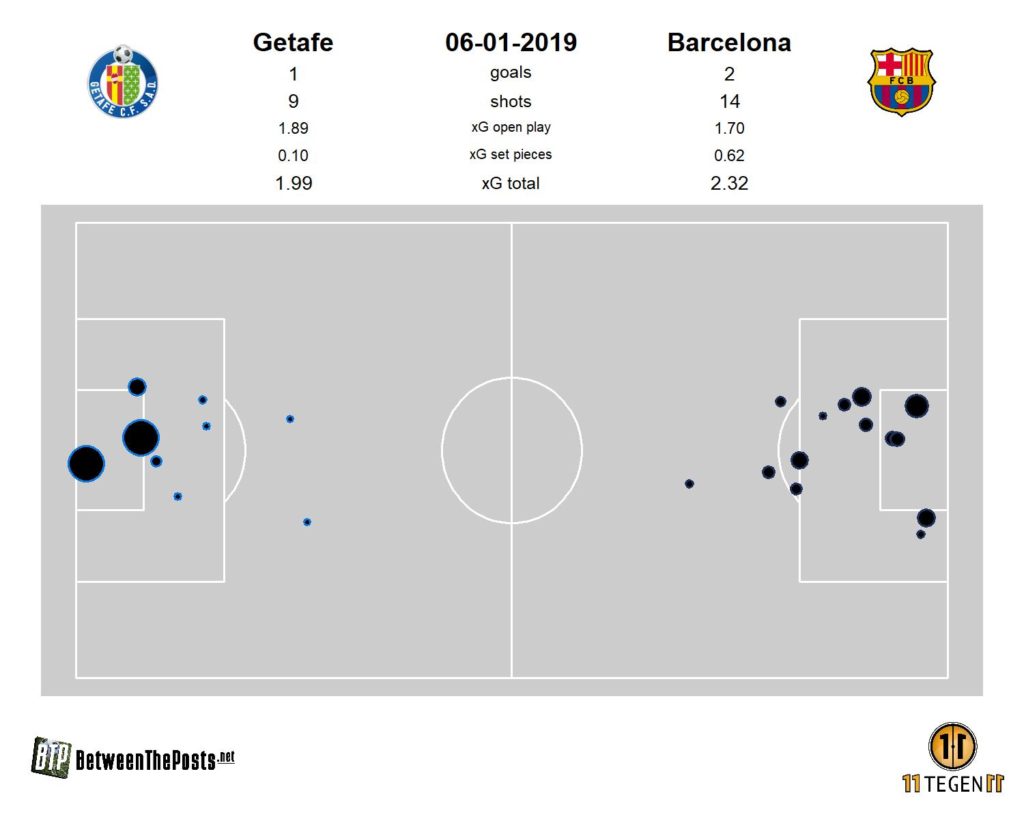 In the 70th minute, Ernesto Valverde brought on Sergio Busquets for Vidal. Busquets dropped into the holding midfield role while Rakitić pushed up to become an attacking midfielder. As the game wore on, another two midfielders were introduced – Philippe Coutinho for Dembélé and Carles Aleñá for Arthur. The idea, it seemed, was to wrestle back control of the game.

Instilling some lengthier possession phases would take the sting out of their opponents and help see out the game. Introducing midfielders that are good at controlling the rhythm of a match and slowing down ball circulation aided this. Busquets in particular is a master at dictating tempo.

Robert Ibañez and Leeds loanee Samuel Sáiz were brought on to play on the wing for Getafe. The latter offered some energetic football with his pressing and dribbling, but the home side never looked like snatching a late equalizer.

Getafe’s pressing scheme presented an interesting challenge to Barcelona and their offensive game – though it lacked creativity – gave the champions something to think about. Their approach is based on hard work and organization and they seem to have the tools needed to keep their place in the top half. Though the congestion in LaLiga’s mid-table means their season can still swing drastically in any direction.

Because of the draw between Sevilla and Atlético Madrid, Barcelona are now five points clear at the top, and thus well on their way to defending the title. This proved to be a tough game for them, but talent up front and some luck allowed them to secure three points. The future remains uncertain for the Catalan club, but from the perspective of their LaLiga season this win was a big step forward.