Girona’s settled defensive performance proved too sturdy to beat, as Antonio Mohamed’s mid-game tactical changes were not enough to see his side complete a second half comeback.

After their away win against Villarreal before the international break, Girona were looking to pick up back-to-back wins whilst also looking to claim their first home victory of the season.

Celta came into this game boasting an unbeaten record under their new coach Antonio Mohamed. Now with the opportunity to extend their winning run to three games, having put aside Atlético Madrid last time out, Celta de Vigo could go level on points with second-placed Real Madrid, on ten points.

Girona made just two changes to their starting eleven for this game. Twenty-year-old Brazilian midfielder Douglas Luiz was given the nod ahead of Pere Pons in the centre of midfield. Up top, the partnership of Cristian Portu and Cristhian Stuani was restored as they lined up together for the first time since the opening day of the season. The resulting setup was still unchanged as Eusebio Sacristán set out his side in the usual 3-4-2-1 shape.

Mohamed’s side were completely unchanged from their last match and also fielded the same 3-4-2-1 shape, as well. 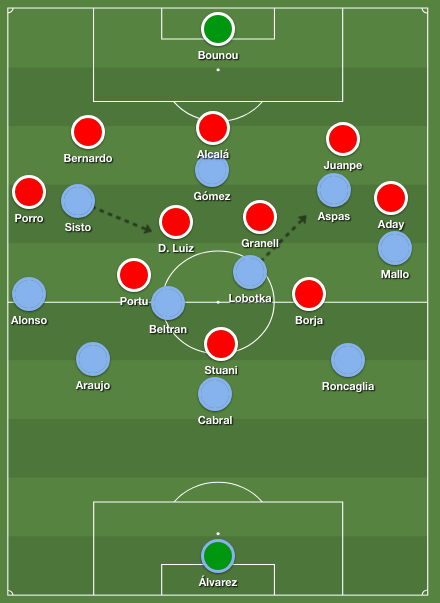 Celta carve through midfield but lack penetration in the final third
The tempo of the match was fast and furious from the start. Many turnovers but not much control and not many significant chances being created, either.

It is partly because of this that Celta found so much joy breaking through Girona’s midfield press. With Stanislav Lobotka being given license to push further up the pitch, the visitors had a host of options to play into centrally. With Pione Sisto, Maxi Gómez and Iago Aspas all taking turns to drop towards the ball or stretch the play with attempted runs in behind, they were able to open up spaces between the lines.

With Girona leaving two men to cover the centre behind their three-man attacking line, they were often heavily overloaded in the middle of the pitch.

Whilst it did appear to be something of an issue that Celta were affording themselves so much time and space in and around their midfield line, it never amounted to much. In fact, 8 of Celta’s 9 first half shots came from outside Girona’s box.

With a back-five, the home side were able to condense the channels between each player whilst also stretching to cover the width provided by Celta’s wing-backs. Often this resulted in Celta funneling play wide, especially to the right.

A common pattern from the away side in possession was to play into Hugo Mallo, who would then play short, inside to one of the forwards. Here, Sisto would come across into a deeper, central position so he could receive unmarked off the back of Gómez. The problem was that he had no follow-up option, other than the players from where the ball had just travelled. The player that should’ve been there to link into the left wing-back was him. And, as a result, Mohamed’s side were rarely able to stretch Girona’s backline and create optimal crossing positions for themselves.

Instead, Celta had to resort to poorly rehearsed pieces of combination play around the edge of the box that never amounted to anything.

Girona doing what Celta could not
Similar to Celta’s struggles, though seemingly more intentional, Girona focused the initial phases of their attack down the right but were more able to play across to the far side when necessary.

A lot revolved around Portu and nineteen-year-old right wing-back Pedro Porro. The former especially offers a level of pace and dynamism that is almost uncontrollable for opposition centre-halves. The two linked frequently throughout the first half, trying to work positions and small spaces to service Stuani.

The home side created the first real chance of the match just six minutes in. As the ball was worked across to Borja García, he played a looping ball over the top to meet the late-arriving run of Portu. Thanks to an excellent piece of control, the forward was able to manufacture a great chance for himself but it was not enough to put the home side ahead.

Eventually, Girona did take the lead, and again down the left side. With Borja García, as he always does, peeling off the back of the opposition midfield, he was able to connect play into the left wing-back, Aday Benítez. Aday’s pinpoint cross then perfectly found the head of Stuani as the Uruguayan had no trouble finding the bottom right corner from a very difficult position.

Aspas impressively netted a free kick from roughly twenty-five yards out that came as a result of their persistent possession passages. Pedro Alcalá had lunged in recklessly to cut out Celta’s attempts at combination play. Alcalá was, however, the one to rectify his previous mistake with a goal to restore Girona’s lead just short of three minutes later. He managed to wriggle free of his marker from a corner and built up a run before powering into the bottom right corner. A finish not too dissimilar to Stuani’s header.

Following Alcalá’s goal to make it 2-1, the pace of the game somewhat fizzled out and Celta began to take firmer control of possession. The away side started to commit more men onto the last line and so too managed to sustain pressure well in Girona’s half.

Though Mohamed’s men were in the ascendency, Girona still appeared to have solid control of proceedings from a defensive standpoint. 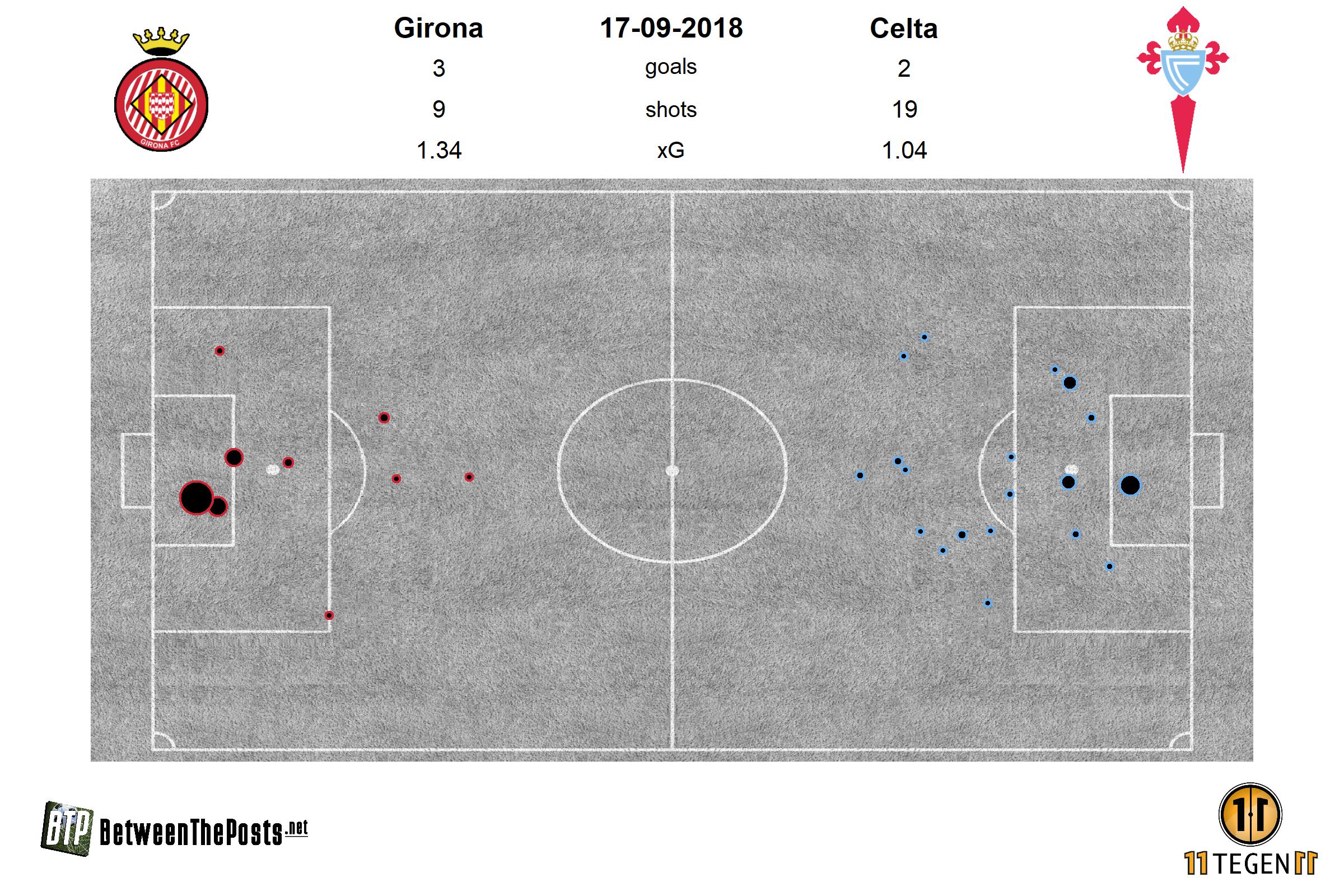 Celta’s half time tweaks result in even more problems
Antonio Mohamed took action at half time by bringing on winger Sofiane Boufal for left wing-back Júnior Alonso – the latter being a player not particularly suited to such an advanced role, so, unsurprisingly, he struggled in the first half.

Boufal had impressed with his recent substitute appearances and had provided another way of stretching opposition lines when fatigue was beginning to kick in. Here, however, he was called in much earlier.

As could also be seen towards the end of the first half, Celta moved to something resembling a 4-2-4 in possession. Now having brought on Boufal, Sisto became the nominal wide figure on the left, with Facundo Roncaglia filling in at left-back and Boufal drifting in from the right.

Although Mallo continued to provide adequate width down the right, the issues concerning the left-hand side were far greater now.

With Sisto’s tendencies to drift inwards and the fact Roncaglia is purely a centre-back, Celta’s possession shape was beginning to look more like a 4-2-2-2 than a wide 4-4-2. 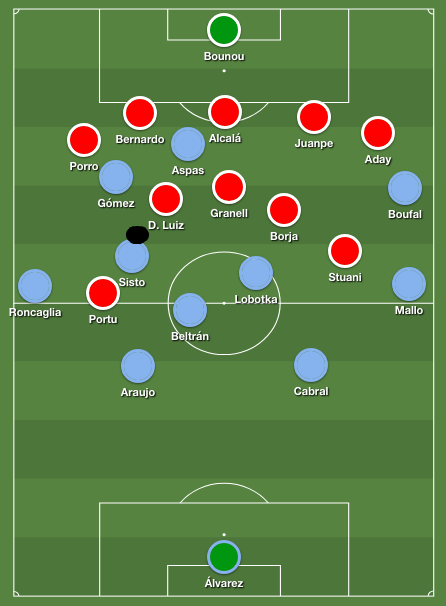 An example of Celta’s positioning in the second half. The ball is displayed at the feet of Pione Sisto

To make matters worse, the shape and, more importantly, the angles increased the difficulties the away side had when trying to recycle possession.

Girona could essentially go man-for-man now without risk of leaving big gaps as Celta became easier to contain. Whenever Mallo or Roncaglia received the ball deep, they were immediately under intense pressure as neither Sisto nor Boufal willingly committed to hugging the touchline and providing a second option. As a result, Girona were better able to squeeze play, force it backwards and close any lanes into the centre.

In the best example of how Celta’s attacking structure made them suffer, Roncaglia was caught isolated, scrambling for options whilst continuously being closed down as Sisto failed to provide the option wide of him. Following the Argentinian’s hesitancy on the ball, Girona were able to force a turnover before launching a lethal counter-attack with the devastating Portu leading the charge. He then cut it back for Porro who laid it into Stuani for his second of the game and Girona’s crucial third.

Another up and down end to the half saw a lackadaisical spell of Celta possession kill the tempo of the game before they managed to peg one back. The visitors even had a man – Gustavo Cabral – sent off in stoppage time, but none of it was enough to claim what would have been an undeserved point.

Takeaways
Girona manager Sacristán will be more than pleased with the shift his side put in tonight against tough opposition. Defending well as a unit and creating clear cut chances without the need for numerous chances. And, given the types of goals they scored tonight – the first from a good passage in open play, the second from a set piece and the third on a counter-attack – Sacristán will be pleased with the flexibility he is seeing from his side.

On the other side Celta de Vigo record their first loss under new boss Antonio Mohamed and it is clear there are still some teething problems, even ones that date back to the opening day draw at home to Espanyol. That being said, it might well be the solid individual performances, like the one from nineteen-year-old Fran Beltrán, that are the key takeaways for a game like today’s. 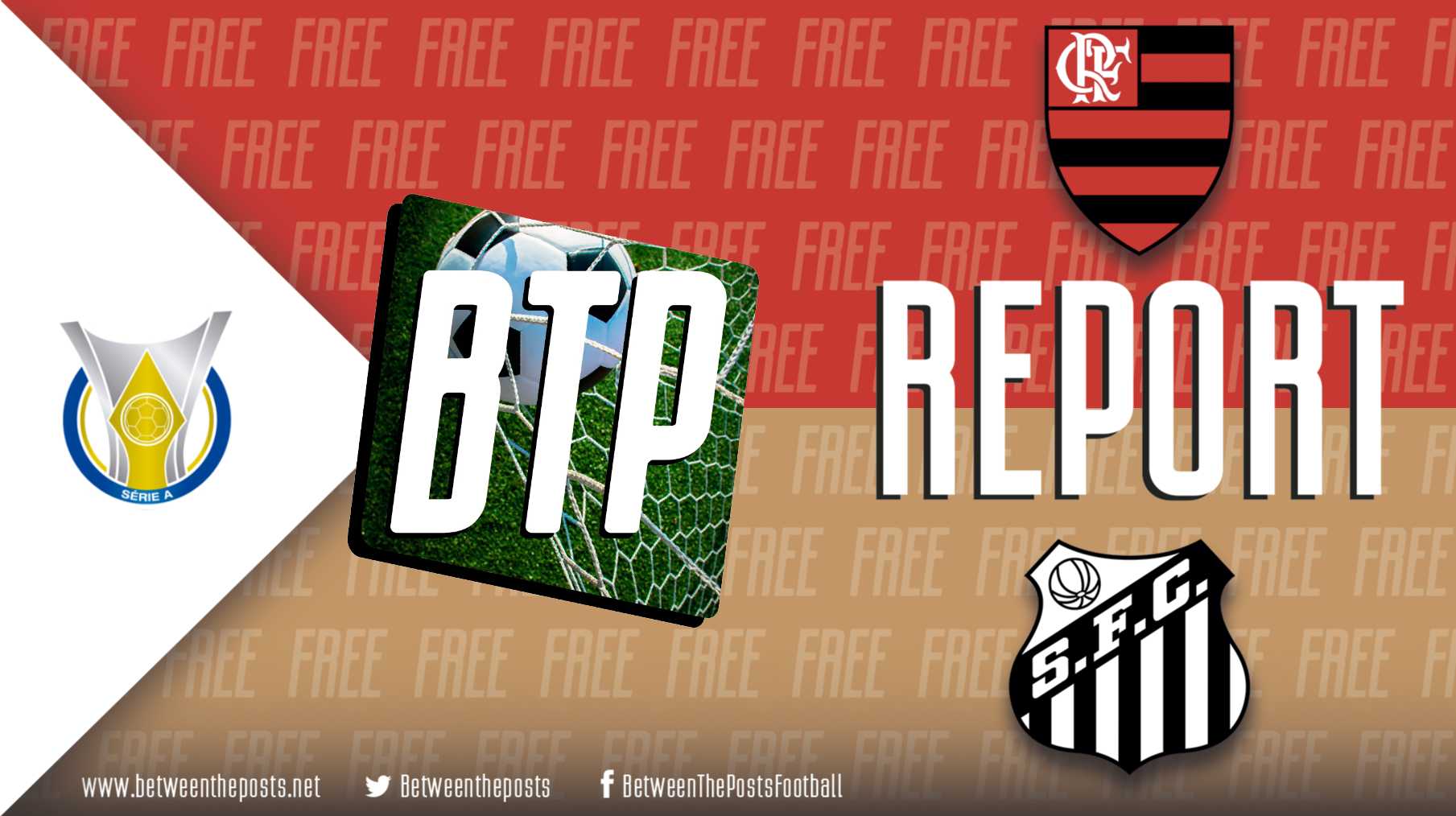 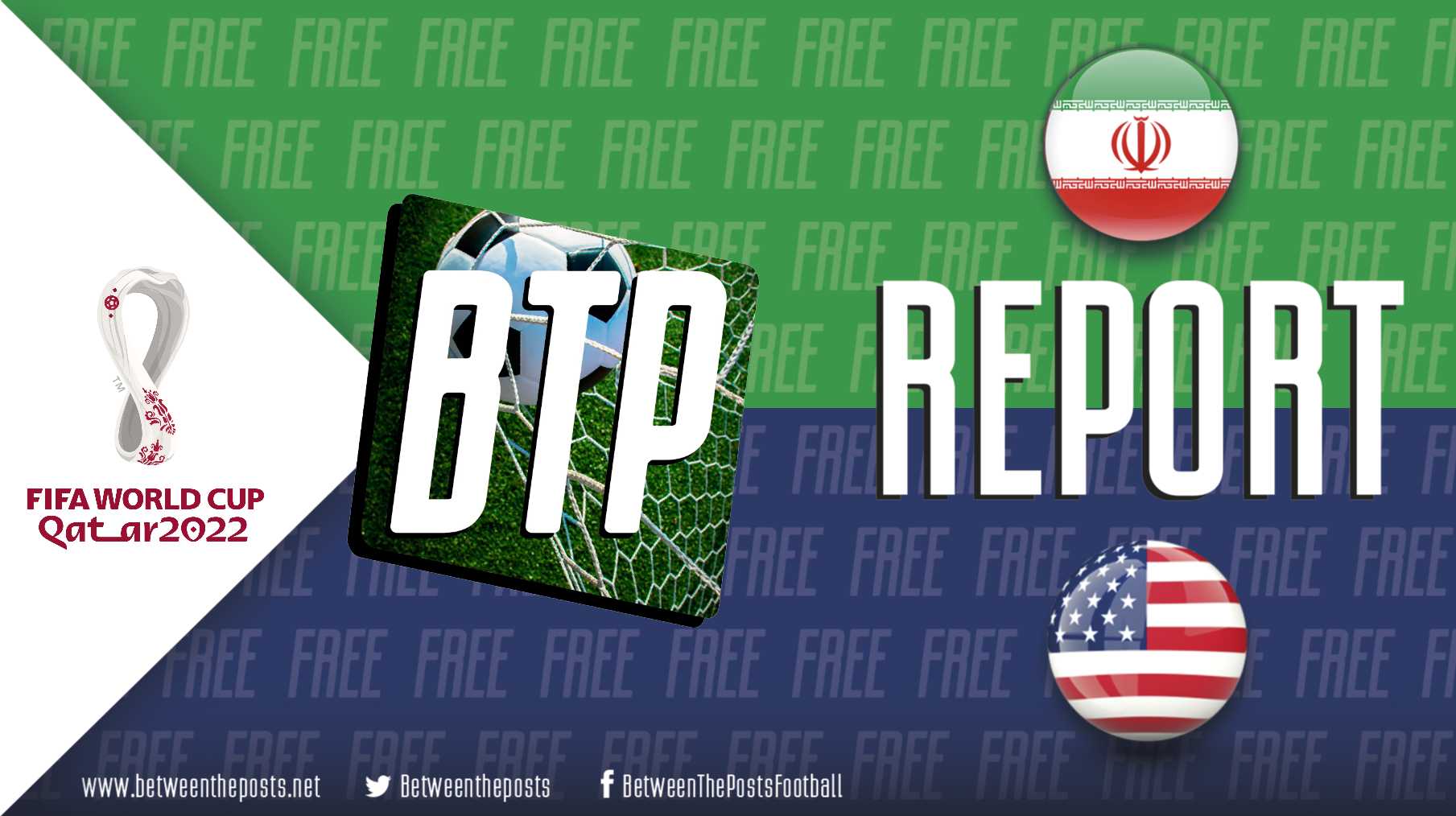