In the recent years, Belgium are one of the best teams in world football, but their attempts to attain silverware have been denied multiple times. Roberto Martínez is in charge of a star-studded side as they head into the World Cup with the hope of securing the coveted treasure.

This tactical preview has been written by Rahul Madhavan.

When Roberto Martínez was hired to lead Belgium in the aftermath of their Euro 2016 exit, the belief was that the next two tournaments posed the country’s biggest opportunity to win their maiden silverware. The ‘Golden Generation’, as it is known, came into fruition with the likes of Eden Hazard, Kevin De Bruyne, and Romelu Lukaku spearheading a group that was capable of going all the way.

Despite playing an exciting brand of football and performing at the highest level in the 2018 World Cup, they ultimately watched France lift the trophy with a hint of dismay. A third-place finish isn’t poor by any means, but there remains a section of supporters who believe the chance went begging. A quarter-final exit in the 2020 Euros certainly did not help, and so here we are, with the 2022 World Cup in Qatar serving as the Golden Generation’s last dance.

Martínez has a strong squad at his disposal with several members of the 2018 World Cup still part of the team. Thibaut Courtois is Belgium’s undisputed number one. His form will be an important factor if his country are to go deep into the tournament, with two accomplished keepers – Simon Mignolet and Koen Casteels backing him up.

The defense has a blend of youth and experience with the old guards – including Timothy Castagne, Thorgan Hazard, Yannick Carrasco, Thomas Meunier, Jan Vertonghen, and Toby Alderweireld. Meanwhile, Wout Faes, Arthur Theate, and teenager Zeno Debast are taking part in their first major tournament. The midfield comprises the ever-present Kevin De Bruyne, Eden Hazard, and Axel Witsel, who are certain starters whilst Youri Tielemans, Leander Dendoncker, Amadou Onana, and Hans Vanaken could compete for a place alongside the three.

Belgium are spoiled for options in the forward areas. Romelu Lukaku’s potential injury woe opens up a spot for the likes of Michy Batshuayi, Leandro Trossard, Lois Openda, Jeremy Doku, and Charles de Ketelaere, but Martínez also has the option to pick the experienced Dries Mertens if Lukaku is to miss the opening set of games.

Ever since Martínez arrived in 2016, he has stuck with the 3-4-2-1 formation with an impetus on possession-based football and patience while surging forward. Belgium also prefer to build up using the wide center-backs, with Vertonghen and Alderweireld taking the responsibility to start the attack. Ahead of the back three, the double pivot Two central midfielders next to each other. remain deep and close to each other, which allows the wing-backs to advance up the pitch.

The front three of De Bruyne, Hazard, and Lukaku are arguably one of the most lethal combinations in world football and it is no wonder that during Martínez’s six-year tenure, Belgium have only failed to score in two games (against France in the 2018 World Cup semifinals and Netherlands in the 2022 Nations League).

As mentioned above, the wing-backs are positioned high up the field and hold the width, allowing the wingers to play in the half-spaces. Meunier, Castagne, Thorgan Hazard, and Carrasco are all adept at invading the box from the wide areas, which enables Belgium to attack the penalty area in numbers. The striker, meanwhile, regularly occupies the center-back and looks to make runs in behind the defenders or into the six-yard box.

While the double pivot are instructed to stay narrow, the wingers in front of them (usually Hazard and De Bruyne) are given the license to drift between the lines. The four players in the central zone usually form a box-like shape to penetrate the opposing midfield and create overloads. Additionally, since the wing-backs operate high and wide, the midfield’s narrowness helps the team to stop quick transitions as they can immediately counterpress After losing possession, a team immediately moves towards the ball as a unit to regain possession, or at least slow down the pace of the counterattack. and force the opposition wide. 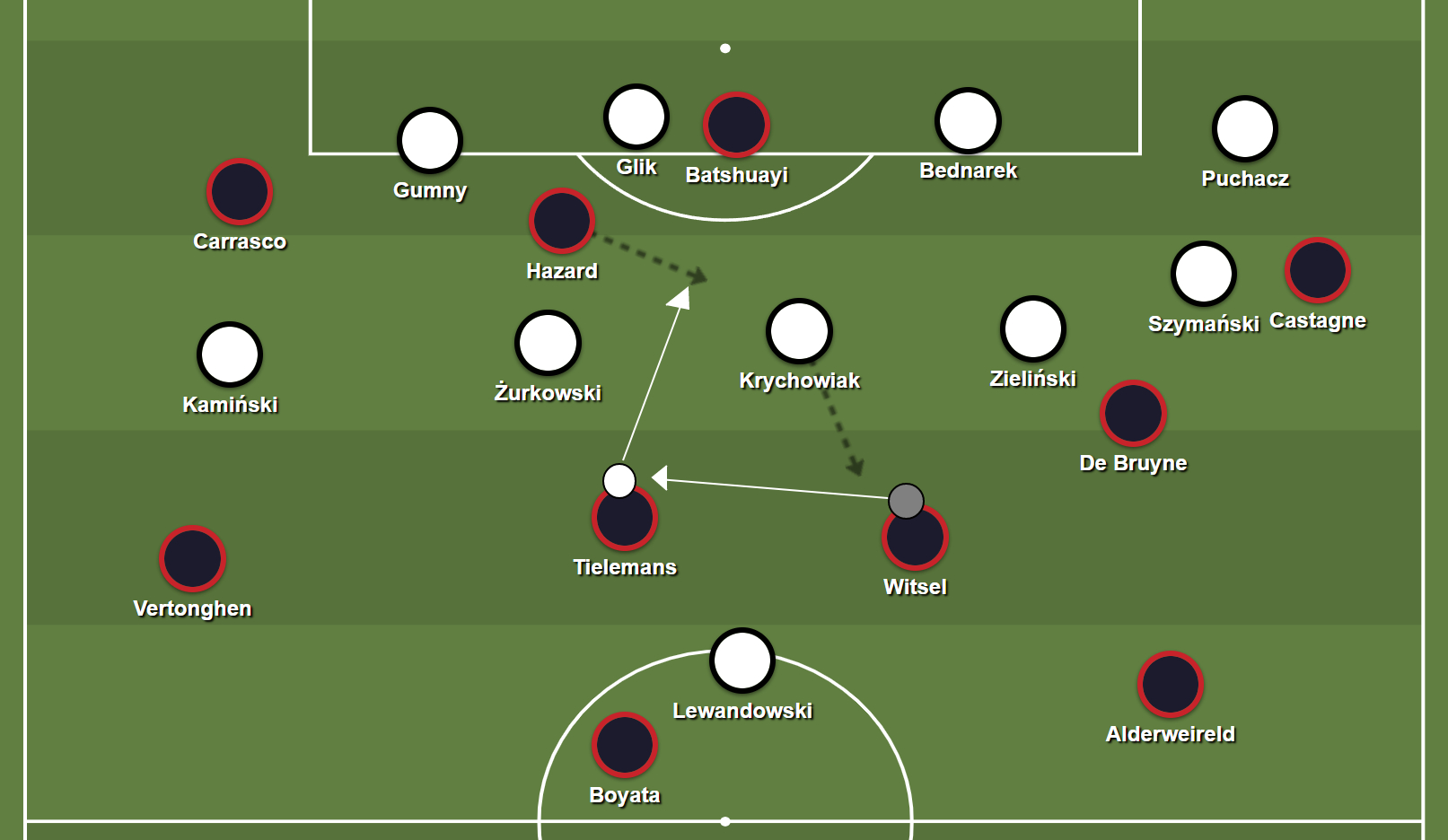 Belgium vs Poland (June 2022): Belgium’s box midfield. Witsel and Tielemans lure Poland’s midfielders with short passes. As the midfielder vacates his position to press Tielemans, Hazard drifts between the lines from the left halfspace and receives the ball on the half-turn. Also, notice the high positioning of the wing-backs.

While Belgium appear structured in possession, there are certain rotations between the midfielders and the wing-backs. Sometimes, Eden Hazard moves centrally to link up with De Bruyne, which in turn attracts the opponents to one area of the pitch and isolates the left flank. Since Carrasco and Thorgan Hazard are wingers by trade, Belgium switch the play and tend to get the best out of them when they are in a one-versus-one situation against their opposing fullback.

Youri Tielemans is Martínez’s preferred choice to partner Witsel in the double pivot as he has started several games alongside him. The Leicester City man is equally capable in the forward areas, and hence, can interchange his position with De Bruyne.

This benefits Belgium in two ways. One – De Bruyne is unquestionably one of the best creators in the world and his crosses and switches of play from deeper areas could wreak havoc. Two – when Belgium face a back five with a low block, A low block refers to a team that retreats deep in their own half out of possession, generally only disrupting their opponents around their own box. they usually form a 3-1-5-1 shape in possession, and the front six, who are technically gifted, can create numerical superiority in the forward areas. 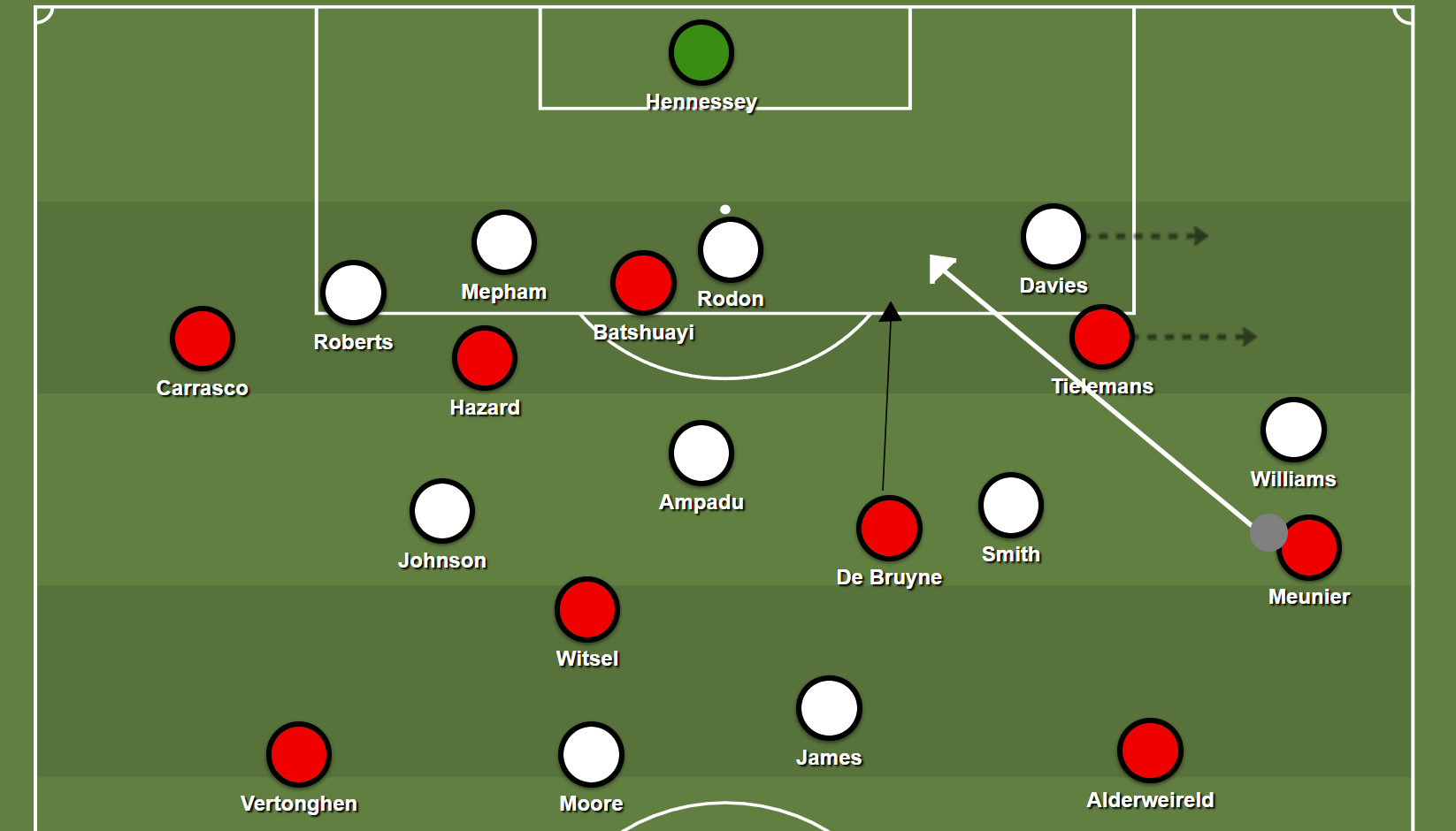 Belgium vs Wales (September 2022): Belgium’s positional rotation and penetration of low-block – De Bruyne and Tielemans interchange positions. As Meunier receives the ball, Tielemans makes a move that drags Wales’ wide center-back. De Bruyne immediately spots the space and makes a run and tees up Batshuayi in the six-yard box, who scores.

When Belgium dominate possession, Eden Hazard is also given a free role, where he can interchange his position with the left-wing back. The Belgian captain is extremely threatening when he receives the ball near the touchline and looks to cut inside and link up with the striker. While Axel Witsel holds the fort in central midfield, the players in front of him are certainly fluid in possession and their rotations can cause problems for their opponents.

Going into the tournament, Martínez boasts one of the best attacking units in the world. However, Belgium’s glaring weakness is undoubtedly their defense. Toby Alderweireld and Jan Vertonghen are entering their twilight years, while the likes of Wout Faes, Debast, and Theate are relatively inexperienced.

Belgium usually press high up the pitch, but they are more than comfortable using a 5-2-3 shape medium block A medium block refers to a team that retreats in their own half out of possession, generally only disrupting their opponents some way into their own half. against teams who dominate possession. Indeed, Louis Van Gaal’s vibrant Netherlands exposed Belgium’s back line during their 4-1 rout at Brussels. They struggled to handle the Dutch pressure and were constantly outdone for pace in the wide areas. 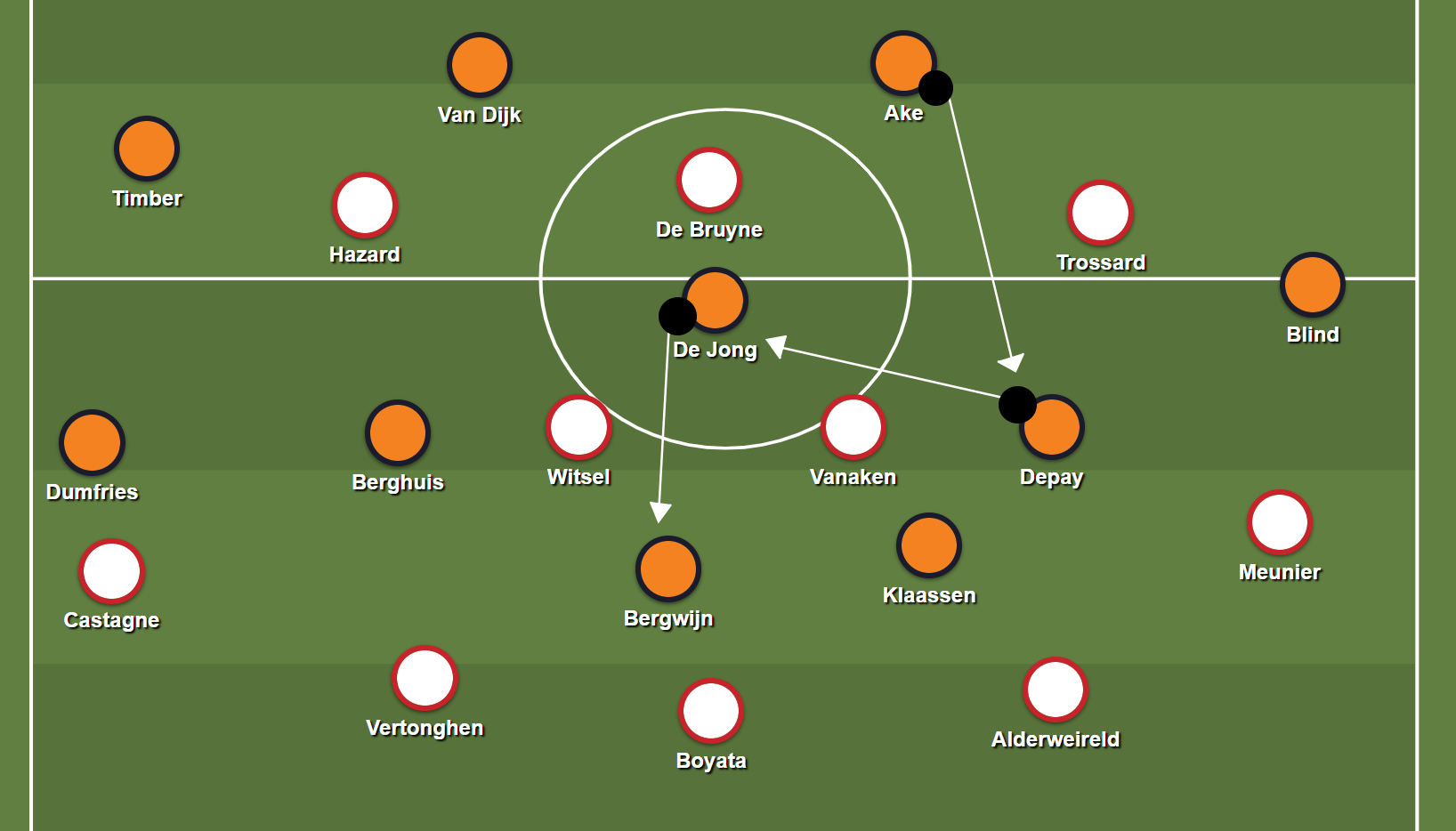 Belgium vs Netherlands (June 2022): Netherlands overloading Belgium’s midfield. Depay drops deep from the left side, but Alderweireld fails to get tight to him, therefore, leaving acres of space for Depay to receive the ball. As Vanaken gets dragged across, it opens up the space centrally for Bergwijn to receive the ball from De Jong and turn. He eventually scored from a long-range effort.

Additionally, teams have targeted their left side as Carrasco or Thorgan Hazard are the only options available to play the wing-back role. While pressing high, Belgium move into an asymmetrical 4-4-2 shape, with the left wing-back joining the midfield line. This leaves space in behind on that side of the pitch as Vertonghen is not the quickest of defenders to recover. Lack of pace in the defense has proved to be an enormous issue during the recent Nations League campaign and could well continue in the World Cup.

Romelu Lukaku’s fitness is another problematic area for Belgium. Martínez relies on the Inter Milan striker, especially on the transition, as he can hold up the ball with his back to the goal and bring in De Bruyne and Hazard into play. Michy Batshuayi has done a commendable job of replacing him in the recent games, but the manager will be sweating at the prospect of missing Lukaku if Belgium progress to the knockout stages.

Belgium will face Canada, Morocco, and Croatia in the group stages and they are favorites to top Group F. The proper test, however, will beckon in the knockout stages, if they to manage to progress as expected. Although they have strong depth in the attacking areas, the fitness of Eden Hazard and Romelu Lukaku could prove vital as Martínez has built the side around them.

However, compared to the previous World Cup, they seem to possess some exciting talents in their armor with Jeremy Doku, Arthur Theate, and Amadou Onana, among the names that could shine on the big stage. Meanwhile, Kevin De Bruyne will once again be at the heart of Belgium’s attack and Martínez will hope that he can transfer his club form to the international stage. Of course, Belgium have a few apparent weaknesses, but on their day, they are one of the most dangerous sides to play against. Moreover, they have much-needed additional motivation as this is the Golden Generation’s last chance at attaining glory. 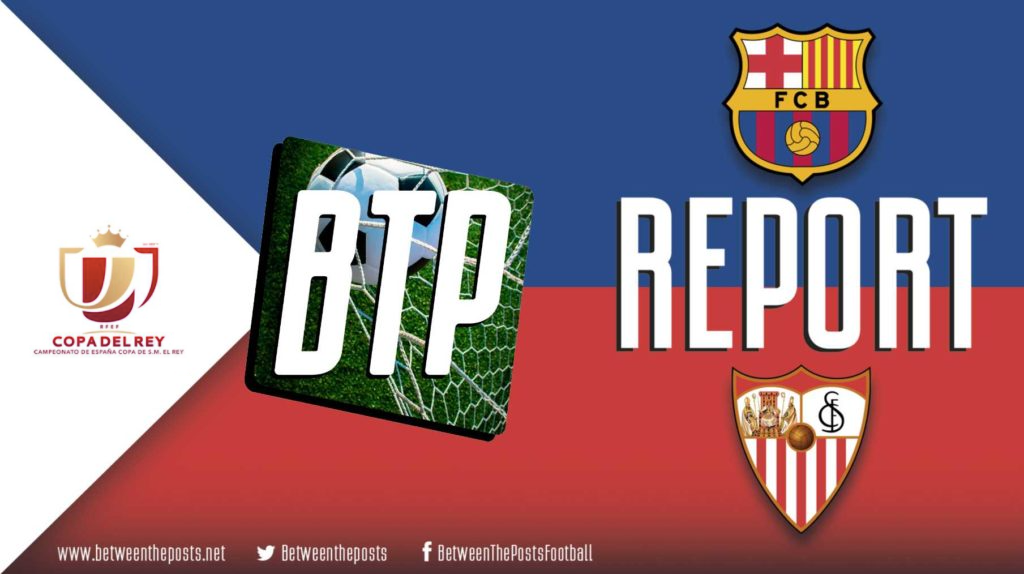