In the first leg of this Copa Libertadores semi-final, Flamengo’s spectacular attack outplayed a more pragmatic and experienced Grêmio side in the first half hour of the game. However, VAR interruptions allowed Grêmio to regroup and take over the game until the middle of the second half, when Flamengo reacted and got their much-deserved goal. Things were looking grim for Grêmio, but they clinched a late goal on the break that ultimately drew the game.

In the South American game where directness and long balls rule, Grêmio and Flamengo break the mold and attempt more intricate buildup sequences with shorter passes. Thanks to this, Grêmio and Flamengo delivered some exciting and intense football despite the constant VAR interruptions as well as drama and emotions often prevailing over tactics.

Grêmio coach Renato Portaluppi has made it clear that, as much as he would love to win the Brazilian Série A league, the priorities for the club are the cup tournaments, both the Copa do Brasil and the Copa Libertadores. This explains why Grêmio have made it to Copa Libertadores semi-finals for three years in a row, yet their league results and underlying numbers do not reflect the fact that they are one of the strongest teams in South America. Against Flamengo, however, Grêmio had to play with several key absences: captain and starting center-back Geromel, right back Leo Gomes, and attacking playmaker Jean Pyerre.

On the other side, Flamengo can claim to be the most in-form team in Brazil, leading the Brazilian Serié A with increasing clarity as well as making it deep into the Copa Libertadores. Portuguese coach Jorge Jesus and his men have created perhaps the most exciting attack in South America.

Their forwards – led by an outstanding Gabriel ‘Gabigol’ Barbosa – move around the pitch with flair, freedom and intelligence to break down opponents. Upon losing the ball, the whole team counterpresses After losing possession, a team immediately moves towards the ball as a unit to regain possession, or at least slow down the pace of the counterattack. intensely, which is best represented by energetic yet creative midfielders like Willian Arão and Gerson. And to boot, Flamengo has added top-level experience to the side with the mid-season signings of full backs Rafinha and Filipe Luis, who just finished long and distinguished careers in two of the very best teams in Europe.

Flamengo’s intense attack and pressing dominates the opening half hour

Flamengo’s shape in possession can best be described as 4-2-2-2. Midfielder Willian Arão often operated between the center-backs to help them play out from the back, effectively forming a back three in possession. The next step in Flamengo’s possession chain featured fullbacks Filipe Luis and Rafinha as the wide passing options, while midfielder Gerson played in the middle, ready to receive the ball from the back three and turn and dribble past opposition midfielders. Ahead of them were attacking midfielders Giorgian de Arrascaeta and Éverton Ribeiro, with the former frequently pushing forward to attack the opposition box while the latter often dropped into deeper zones to support his midfielders in buildup tasks. 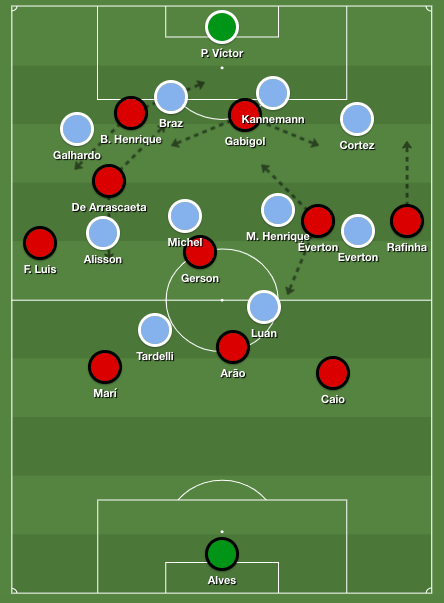 Up front, strikers Gabigol and Bruno Henrique moved intelligently across the width of the pitch, doing whatever Flamengo’s attacking plays required of them. Sometimes they had to drift wide to combine with their teammates, sometimes they had to make support runs to provide a passing outlet during the buildup phase, sometimes they had to run behind defenders. Gabigol in particular was devastatingly effective at these tasks, often executing them with fast and precise first touches.

Flamengo’s most incisive possessions occurred on the left flank. Filipe Luis would move the ball through midfield zones and into the final third with the help of De Arrascaeta as well as the support runs of Gabigol and Bruno Henrique. This quartet would then try to create passing combinations to break down the Grêmio defense. 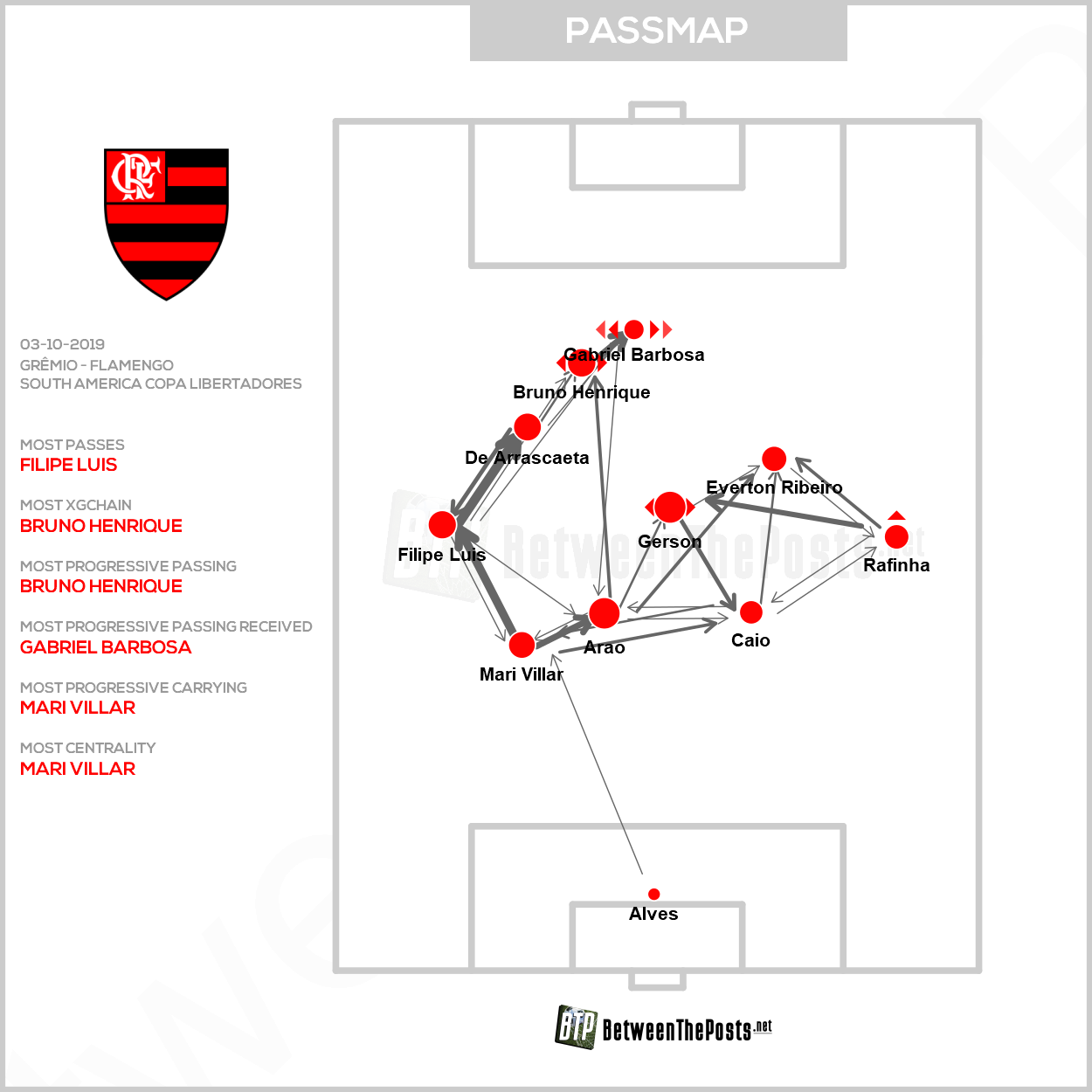 In the middle and right side, Gerson and Éverton were constantly moving to free themselves from the marking of Grêmio defenders and midfielders, provide passing outlets to their teammates and stretch the Grêmio defense. As the image below shows, thanks to their player movements, Flamengo usually had a free man available despite Grêmio’s tight defending, and the team passed the ball around quickly enough to take advantage of this.

Even if Flamengo could not turn most of their possessions into shots due to Grêmio’s defending, they lost the ball so high up the pitch that their counterpressing was very effective. And if Grêmio made it past the first line of Flamengo pressing or sent a long ball, they wouldn’t make it past Arão and Gerson in midfield.

Flamengo played at a very high tempo that demanded significant focus and intensity. So it should come as no surprise to learn that they lost momentum after two successive VAR decisions interrupted the game and ruled out their goals at the 20th and 24th minutes. To further disrupt Flamengo, Grêmio committed fouls more frequently in the last twenty minutes of the half. This led to yet another VAR decision in the 38th minute to check on a potential red card for offense from Grêmio that was ultimately just punished with a yellow card.

Flamengo’s attack stopped being fluid and continuous. Grêmio stopped Flamengo’s possessions before they reached the final third, the precision and speed of Flamengo’s passes decreased (except for the “enlightened” Gabigol), they couldn’t counterpress so effectively anymore. Grêmio started finding opportunities to counterattack through Everton and incisive right back Rafael Galhardo, who essentially behaved as a winger throughout the game.

All in all, very little happened at the end of the first half, with no shots from either team in the last twenty minutes despite the constant come-and-go and trading punches. This game state favored Grêmio, who could finally breathe after being outplayed during the initial half hour.

Grêmio dominates the start of the second half

The first twenty minutes of the second half saw the tables flipped, with Grêmio controlling possession (62 percent versus Flamengo’s 38) and passing their way through the Flamengo defense, while Flamengo counterattacked, led once again by the speed and precision of Gabigol.

Grêmio’s attacking phase was not as exuberant as Flamengo’s nor as continuous (since they rarely counterpress), but it proved to be fairly effective. Grêmio often attack in a 4-2-4 shape, with the forward quartet given significant freedom to move across the width of the pitch and switch positions. Sometimes Tardelli would show up on the right wing, sometimes it would be Alisson or even Everton. And any of them could also make a support run behind Flamengo’s midfield to provide a passing outlet for their central midfielders. It can often depend too much on the individual inspiration of the forwards, but when it works, Grêmio’s “systematic chaos” is hard to defend against. 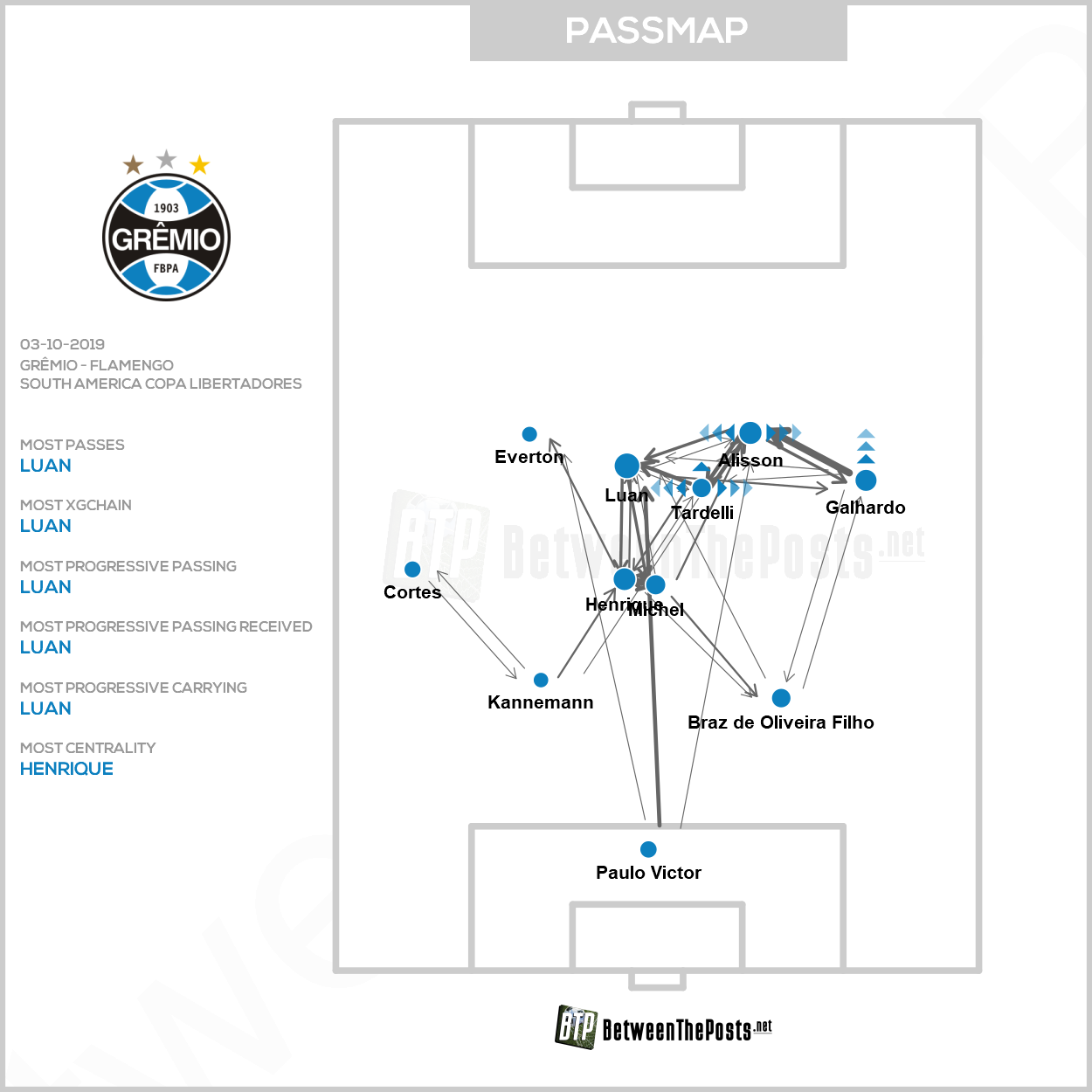 However, the standout performance of this section of the game was midfielder Matheus Henrique, who acted as Grêmio’s midfield director. He passed and dribbled through Flamengo’s pressing lines to move the team forward, and once Grêmio circulated the ball around in Flamengo’s half, he decided where and how the team would attack in the final third. Grêmio’s efforts were almost rewarded in the 62nd and 65th minute, with only miracle saves by keeper Diego Alves prevented the scoreline from tilting in their favor.

In a crazy finish, both teams scored while being dominated by their opponents

After Alves’s saves, Flamengo finally regained some composure on the ball. Instead of sending it long when pressed or going immediately for the vertical pass, they kept possession for longer, so as to defend with the ball and prevent Grêmio from attacking further. In the 69th minute, after a couple of minutes of moving the ball around in front of Grêmio’s box, De Arrascaeta showed up by surprise on the right side and delivered a cross to the far post, where Bruno Henrique beat Galhardo in the air and headed the ball into the goal.

Grêmio tried to articulate a response to this goal, but in their desperation, their attack became more and more precipitated and direct, and more likely to crash against Flamengo’s defense. During these minutes, Flamengo looked more likely to score a goal on the counter instead, with Gabigol having yet another goal ruled out due to offside in the 80th minute.

Renato fired off substitutions in rapid succession between the 78th and 82nd minute. None of them represented significant tactical changes: Maicon for Michel (midfielder for a midfielder), Pepê for Alisson (a winger for a winger), and André for Tardelli (striker for a striker). The objective was simply to get fresher legs (and minds) for the final minutes. The changes did not make Grêmio’s attack less precipitated nor Flamengo less likely to score, but they ultimately affected the result. 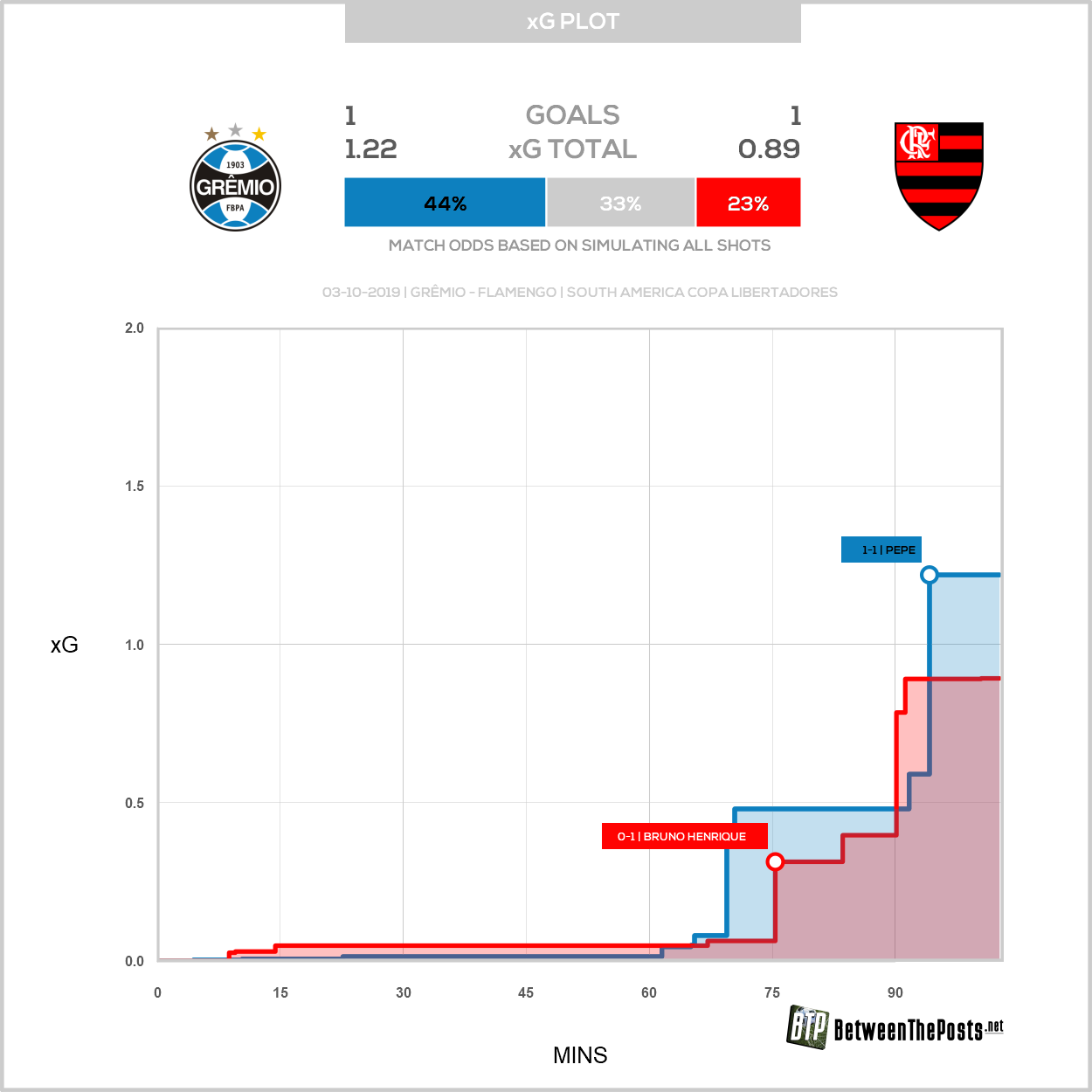 In the 88th minute, with Flamengo pushing up to attack, Grêmio took advantage of the one instance in which they could attack with directness and precipitation: a counterattack. Quickly moving the ball forward from one side of the pitch to the other, the ball ended up at Everton’s feet right beside the box, and the winger let loose a powerful low cross that Pepê pushed into the goal.

It was always going to be hard for Grêmio to control the game, since Flamengo have more (and more in-form) talent. However, Grêmio’s struggles to control games or attack with composure are not new. They’ve been the team’s key struggles ever since the departure of Arthur Melo, and it is unlikely that coach Renato will be able to fix them by the time the second leg comes along. Thus, Grêmio will mostly likely bet their improvement on the return of Pedro Geromel and Jean Pyerre from injury, boosting both their defense and attack.

As for Flamengo, the game plan for the second leg is clear: to try to dominate Grêmio through possession and pressing in a similar way to how they did in this game. Flamengo are not a team built for defending in a deep block, so pressing constantly still seems their best way to victory, even if it does carry a risk of counterattacks like the one that led to Grêmio’s goal. 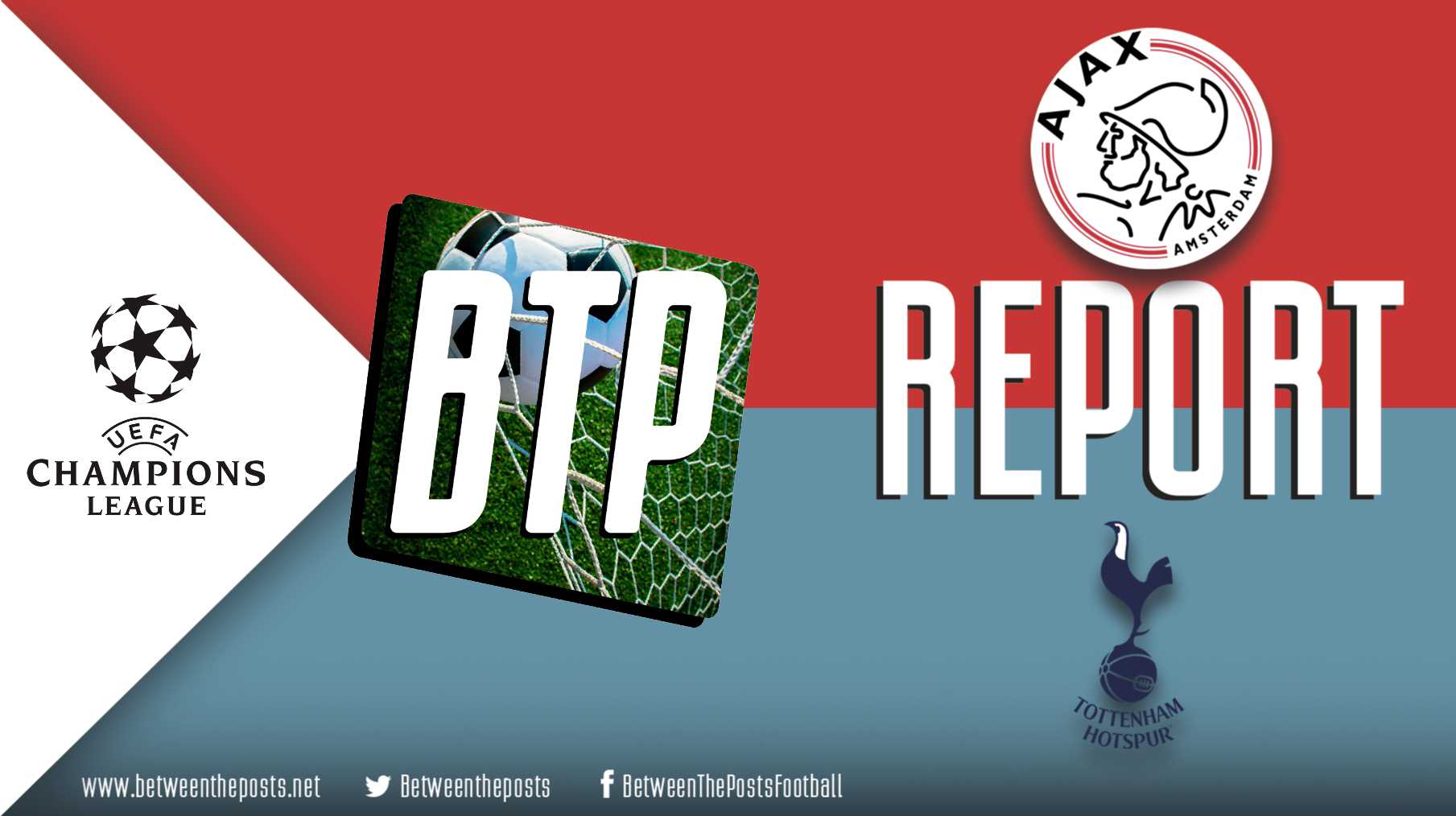 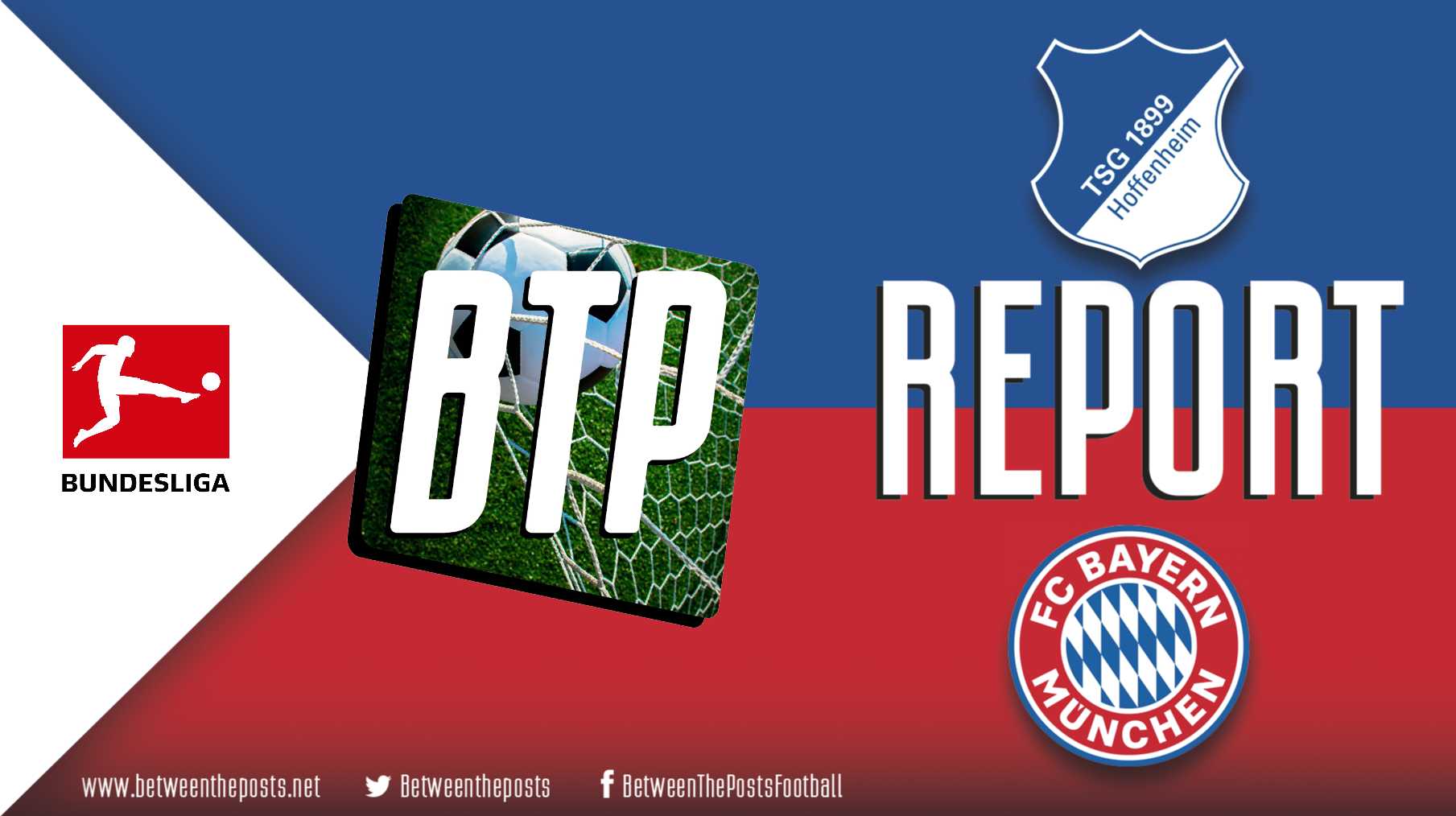