In the first leg of the Copa Libertadores quarter-final, Grêmio dominated possession but failed to create any good chances. As expected, Palmeiras looked to sit deep and punish the opposition on the counter, but they were not very successful with this strategy. However, they are now very close to the semi-final, courtesy of a stunning goal from a free kick.

Within ten days, Grêmio and Palmeiras play each other three times. The first match on Saturday ended in a 1-1 draw, which saw the guests lose the top spot in the league. Grêmio manager Renato Gaúcho made as many as ten changes to his starting eleven, clearly prioritizing the Copa Libertadores over an already lost league campaign. Left back Bruno Cortez was the only remaining player from the last match but he had to leave the field through injury in the nineteenth minute and was replaced by Juninho Capixaba.

Luiz Felipe Scolari changed his starting lineup in eight positions. Goalkeeper Weverton, center-back Gustavo Gomez and right winger Dudu were the only players that started the last match as well. Palmeiras set up in a 4-2-3-1 formation instead of the 4-1-4-1 formation they used three days ago. 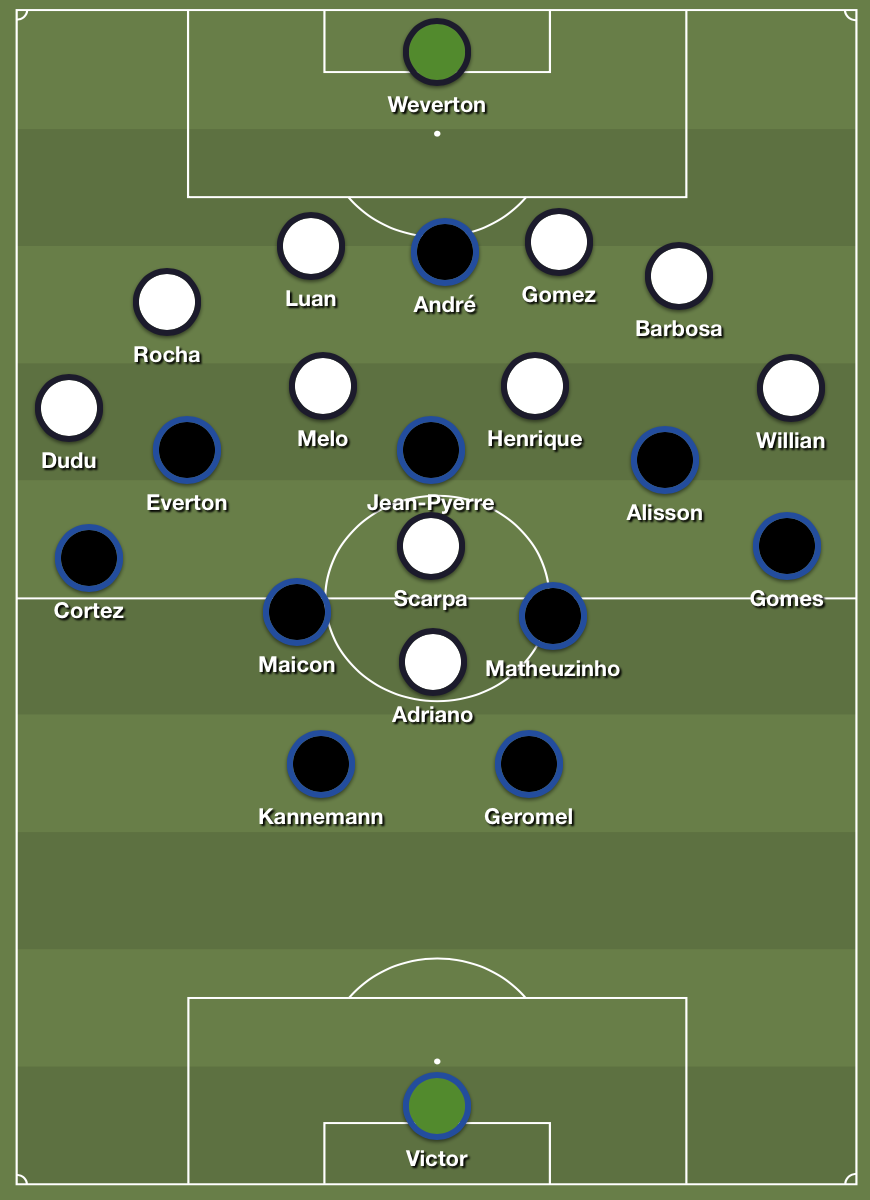 Palmeiras’ nominal 4-2-3-1 formation turned into a situational 6-3-1 out of possession, so deep was the positioning of their wingers at times.

Similar to the last match, the home team saw much more of the ball than their opponents. Out of their 4-2-3-1 shape in possession, the wingers played very narrow, looking to find spaces in the middle of the pitch and overload When one team has more players in a certain area or zone than the other team. the area around the ball.

This opened the wings for the fullbacks to move up. Both defensive midfielders – Maicon and Matheuzinho – were responsible for the buildup and offered themselves for the center-backs to the sides of Palmeiras’ strikers. Jean Pyerre did not stay behind the opponent’s midfield line like a number ten usually does but dropped deeper.

To advance the ball, Grêmio tried to play the ball between Pasmeiras’ lines. Either the ball was aimed to André who was expected to lay it off to one of his teammates, or the ball was played into the winger’s foot, who then could turn and advance with the ball. While this looked like a nice idea in theory, the hosts had problems to create dangerous situations.

This was mainly down to their own structure in possession. Overloading the area around the ball, all offensive players – except André – looked to drop deep. Therefore, no one occupied the space between the lines. Palmeiras’ midfielders could push up and put pressure on the ball without taking the risk to be outplayed.

If Grêmio was able to combine through the guest’s midfield, the attack was stopped by the narrow back-line. Because Grêmio did not occupy the wings, the fullbacks could narrow the distance to the center-backs. It was hard for the hosts to find the spaces, which led to turnovers. 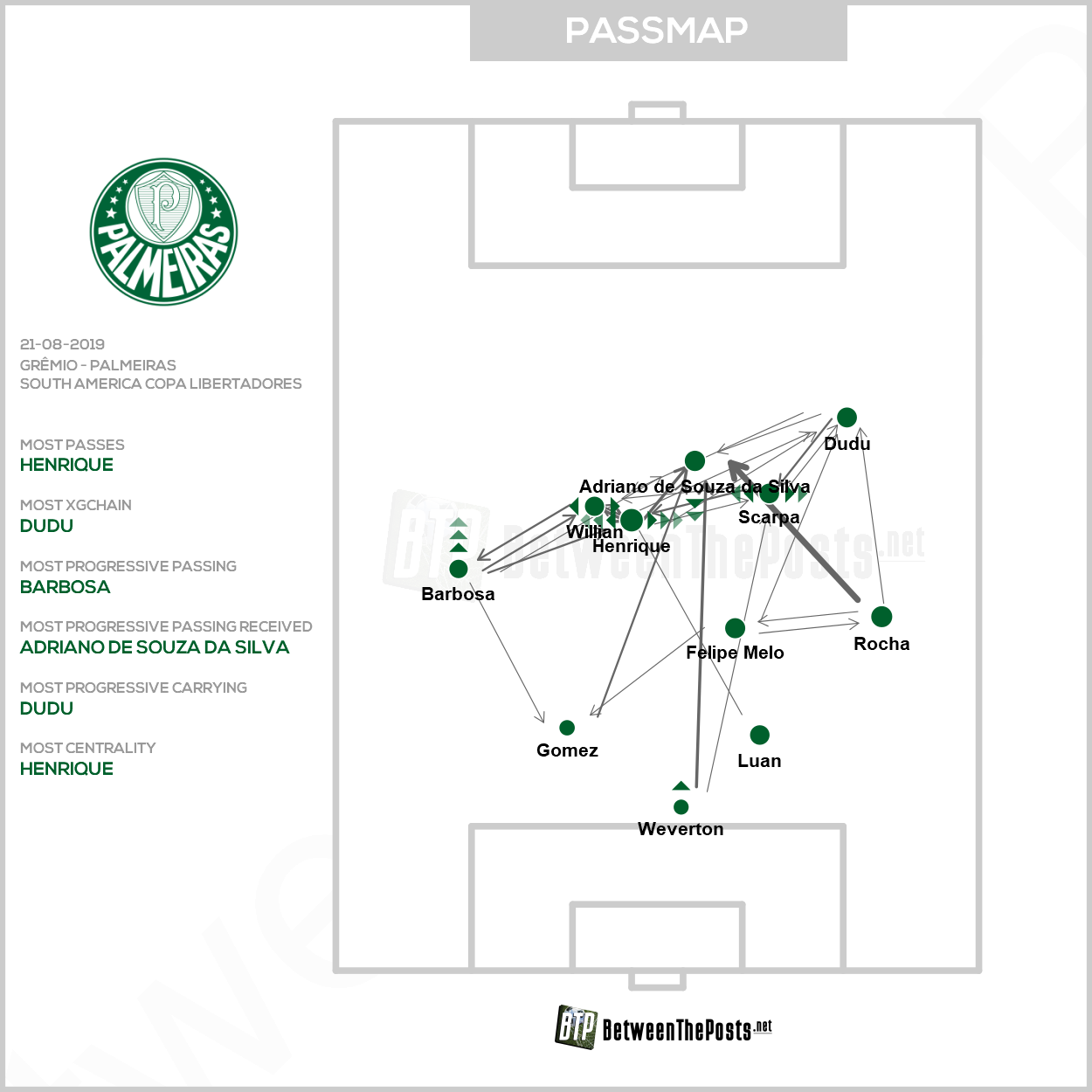 Furthermore, Palmeiras hardly managed to win the ball in situations that could lead to a dangerous counterattacking opportunity. Because of the six players in the back-line, they were not able to put pressure on Grêmio’s buildup. If they won the ball, they did this deep in their own half, lfar from the opponent’s goal. In addition to their own problems, Palmeiras als suffered from Grêmio’s good counterpressing.

The guests still managed to score the only goal of the match, thanks to the poor pressing by the hosts. In the few possession spells Palmeiras had, the lack of horizontal and vertical compactness by Grêmio was shocking. In the buildup to the goal, defensive midfielders Maicon and Matheuzinho tried to press in the opponent’s half, while the wingers and defenders stayed in a low block, resulting in a big space in the middle of the pitch.

Palmeiras could outplay the press with a simple one-two and advance with the ball until they were stopped by a professional foul. The following free kick was converted by Gustavo Scarpa, who netted a screamer from way outside the box.

Palmeiras drop deeper after the goal

With the away goal scored, the guests opted for a low block for the remainder of the first half. The 4-2-3-1 shape transformed into a 6-2-2 or 6-3-1, making it hard for Grêmio to create goal scoring opportunities. Scolari’s idea to let his wingers defend like fullbacks might be that he wanted to see his fullbacks to follow the movements of Everton and Alisson. In addition, defensive midfielders Felipe Melo and Bruno Henrique were man-oriented too, looking to put pressure on the opponent’s central midfielders. To prevent a numerical inferiority, Scarpa sometimes dropped deeper to support his team-mates.

Against this defense, Grêmio failed to create any chances, let alone progressions into the box. The ball was played from one wing to the other, but rarely found his way into the dangerous areas. Grêmio could have done much better, though, if they would use their numerical superiority in the middle of the pitch. To achieve this, Jean-Pyerre should have taken a position behind the midfielders and moved wide into the halfspaces If you divide the field in five vertical lanes, the halfspaces are the lanes that are not on the wing and not in the center. Because there is no touchline like on the wing, players have the freedom to go everywhere. But this zone often is not as well-defended as the very center. This makes it a very valuable offensive zone to play in and a lot of chances are created by passes or dribbles from the halfspace. to take advantage of the spaces created by the high positions of the wingers and fullbacks. 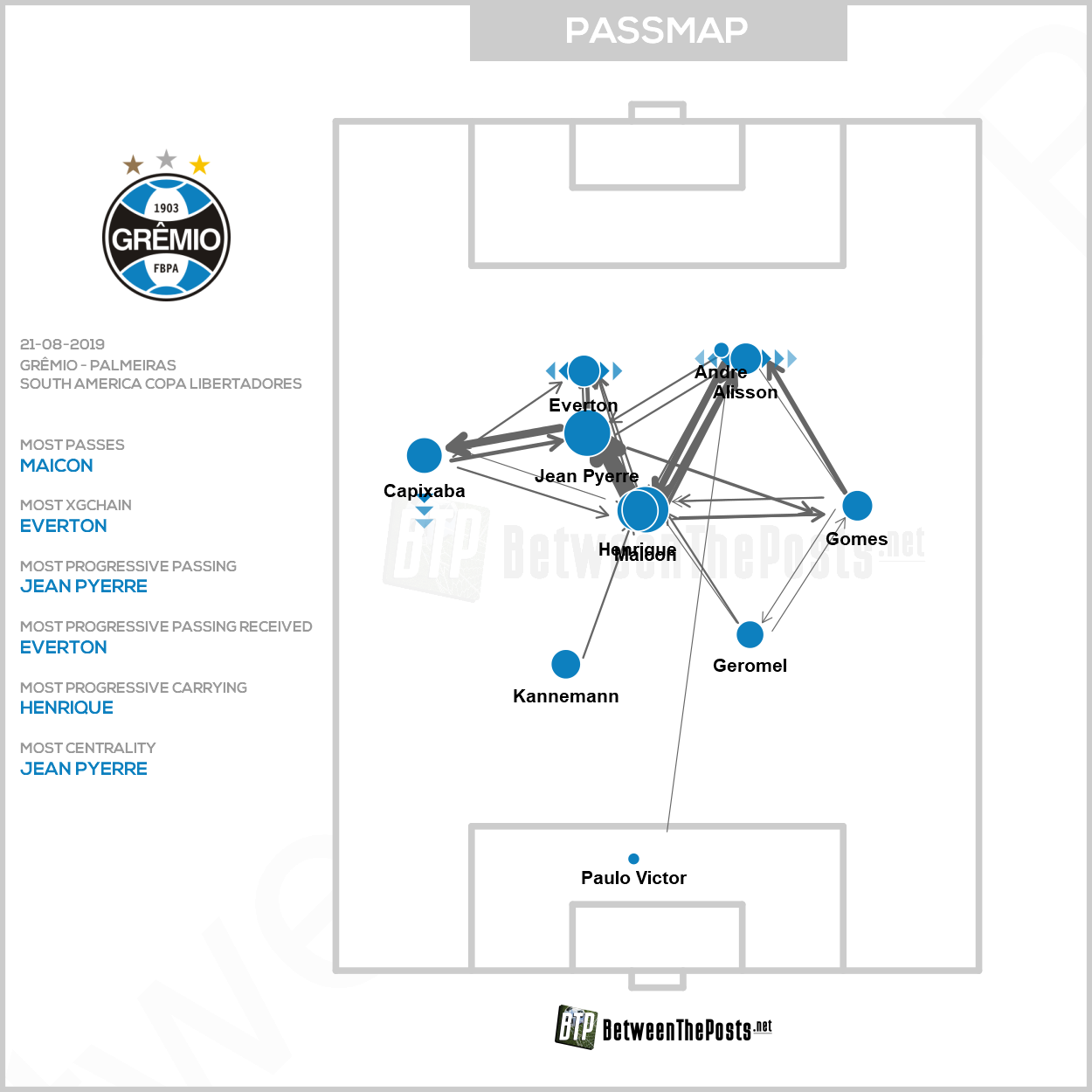 In the second half, Gaucho instructed his wingers to stay wider and attack through the wings. They used dribbles – mainly by Everton – and overlapping runs from the fullbacks as well as combination plays, which were supported by the central midfielders. The combination plays worked out to be the most promising possibility, because they contained positional rotations which worked very well against the man-orientations. Although the box was occupied by two or three attackers, the ball never found its way into the dangerous area, though.

Palmeiras faced different problems in the second half. First of all, they were unable to pressure Grêmio at all. The hosts could therefore advance the ball into the final third The one-third of the pitch that is closest to the opposition’s goal. with ease. As a consequence of this, they did not have a lot of ball recoveries and could therefore rarely create counterattacking opportunities.

The own possession spells were dominated by long balls. Even if they managed to win the second ball, they could not hold onto it for long.

Palmeiras down to ten men

Felipe Melo saw his second yellow card of the night with fifteen minutes to go, which saw Palmeiras going down to ten men. This hardly changed Palmeiras’ game plan though. They stayed in their low block in a now 6-2-1 formation. Grêmio could put a lot of pressure on the defensive using the spaces on the wings. However, the attacks ended in poor crosses or long shots. Instead of taking profit of being one man more, the attacks were played too hectical. 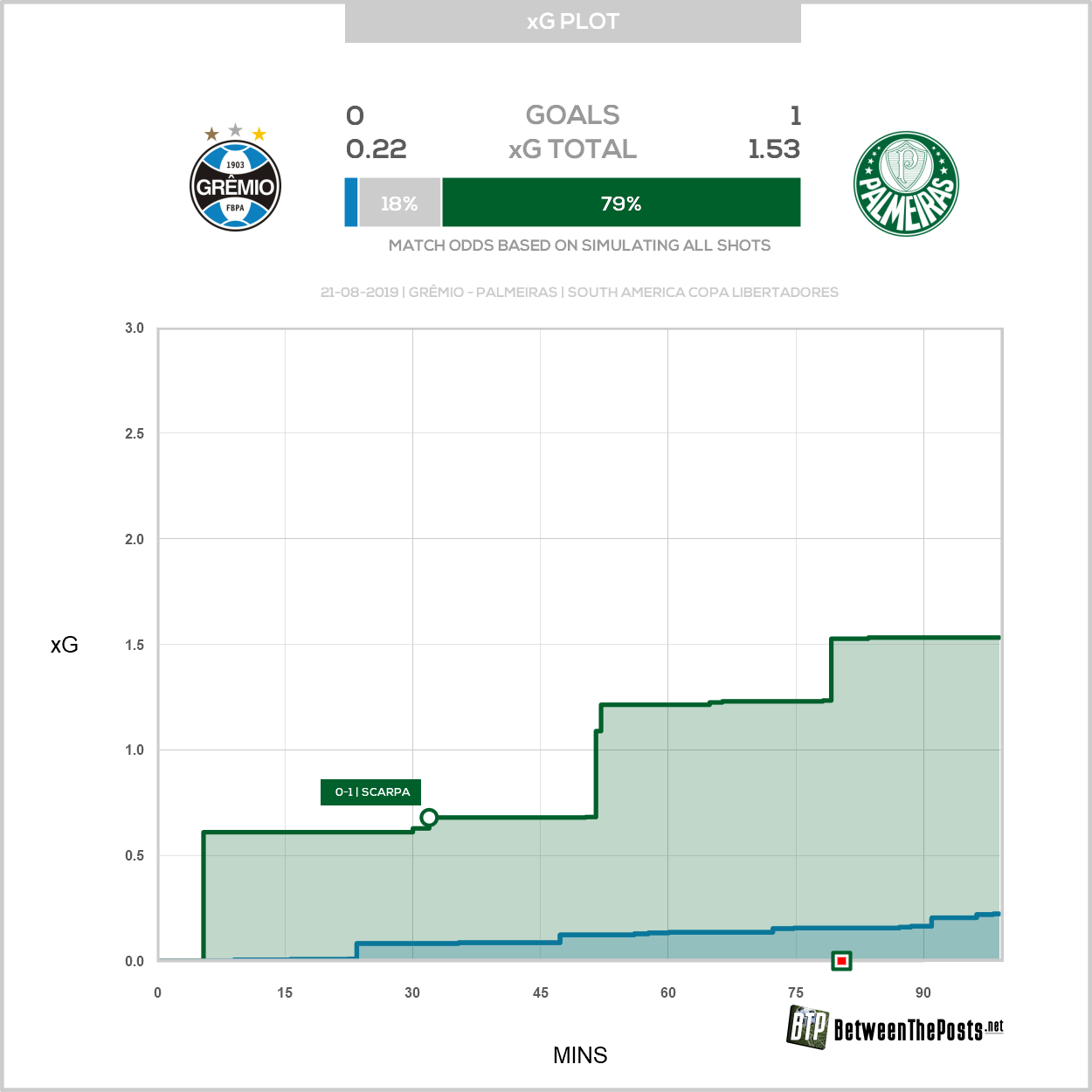 In a match that did not deserve any winner, Palmeiras scored the crucial away goal that gives them a good starting position going into the return leg next week. The task for Grêmio will be very hard, knowing that they struggled to create chances in the last 180 minutes against this opponent. They have to score at least to goals against an opposition that is undefeated at home this season. With this result, Grêmio’s season is in grave danger of ending premature and disappointing.

To avoid a tense game next week, Palmeiras should look to see more of the ball, because the compactness of Grêmio’s press did not look good in this match and they should be vulnerable there. 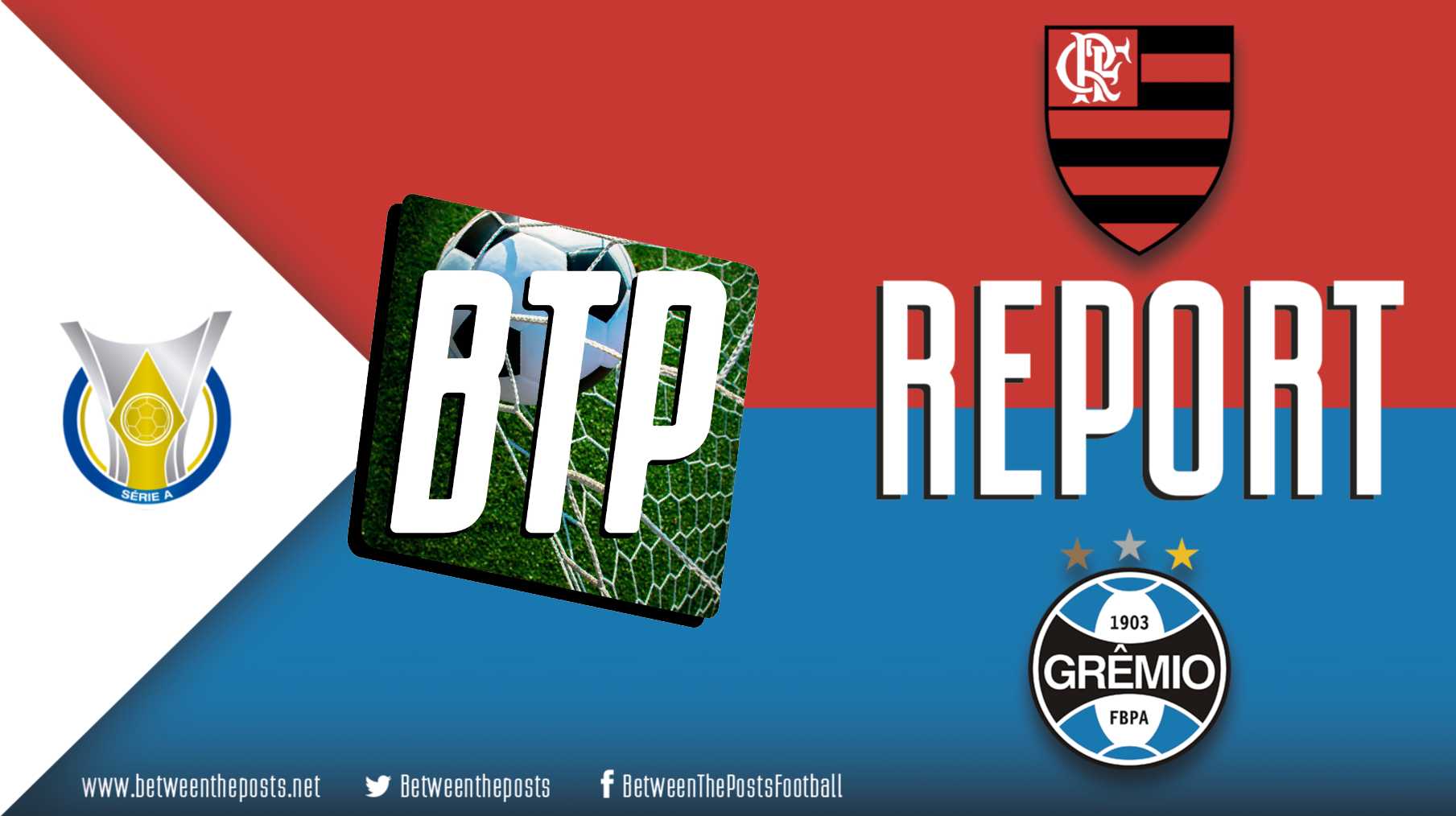 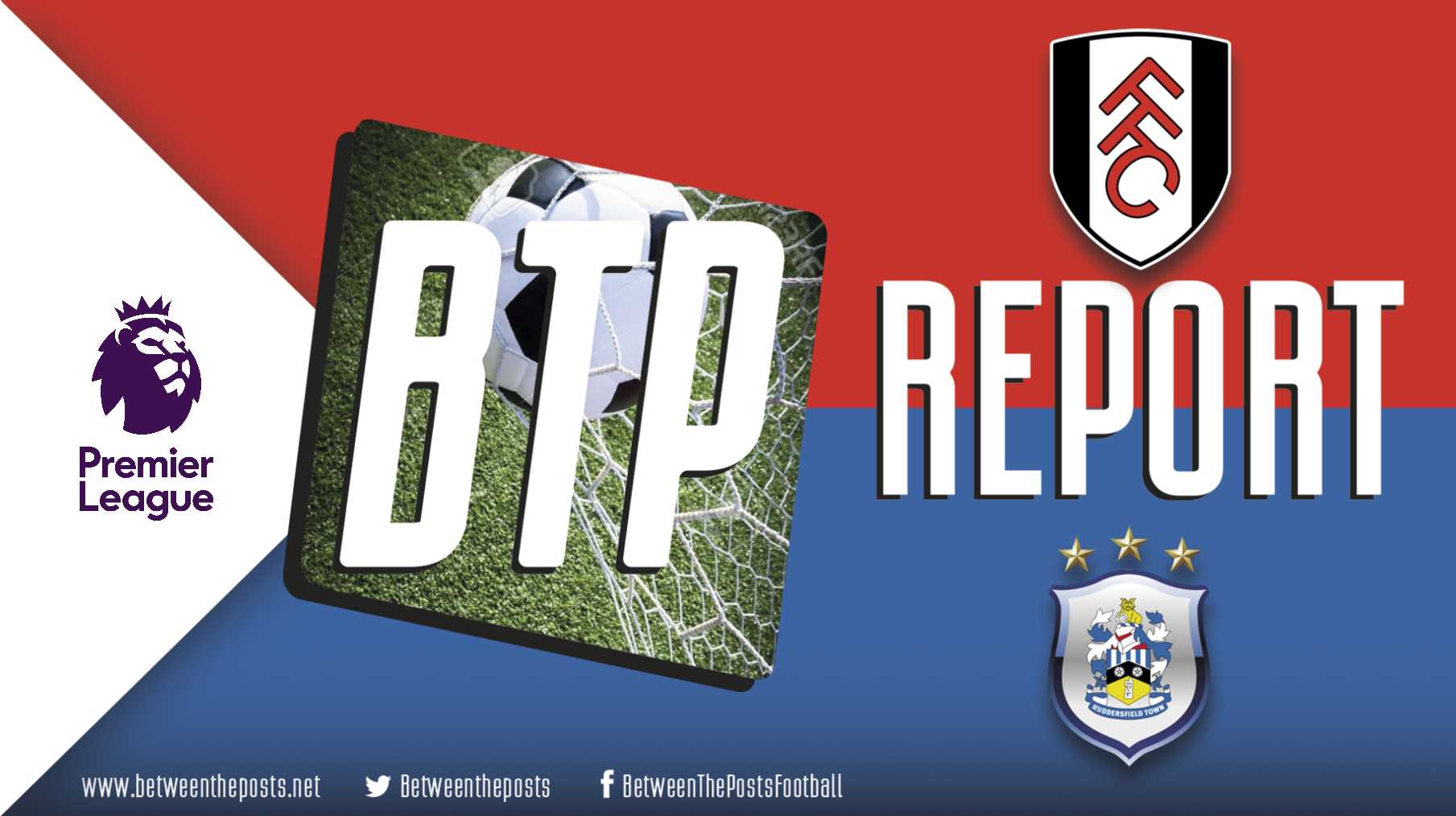