Barcelona came to Inter with a rotated team and a different system to what they usually use. They struggled at times against the high pressing of Inter, but after establishing possession higher up the pitch, Inter found themselves becoming quite passive, allowing Barcelona long spells with the ball. The game seemed to be heading for a draw with first half goals from Carles Pérez and Romelu Lukaku, until substitute Ansu Fati struck the winning goal for Barcelona in the final minutes.

Barcelona visited Inter for the final Champions League group matchday with the luxury of knowing that they were already qualified and guaranteed to finish top of their group. The unassailable position held by Ernesto Valverde’s side allowed them to make several changes to preserve the fitness of first team regulars ahead of their upcoming games, particularly next week’s El Clásico.

The likes of Lionel Messi and Gerard Piqué did not even travel with the squad to Italy. Meanwhile, other key players such as Sergio Busquets, Frenkie de Jong and Luis Suárez only started on the bench. The personnel was not the only irregular thing about Barcelona’s lineup in this match, as Valverde also brought out a 3-5-2 system for this game, which he has used on only a few occasions during his time at Barcelona, as opposed to their usual 4-3-3 or 4-2-3-1 shapes.

Jean-Clair Todibo was handed a starting place alongside Samuel Umtiti and Clément Lenglet in defense. Another young player included was Moussa Wagué, who was given a chance to impress at right wing-back. Carles Aleñá and Carles Pérez were two players who saw plenty of first team football early in the season but have had little involvement in recent weeks. They started this match as central midfielder and striker respectively.

Antonio Conte’s side also lined up in a 3-5-2 system, which is of course a much more familiar configuration for Inter than it is for Barcelona. Due to injury, Inter were without the midfield duo of Nicolò Barella and Stefano Sensi, who were important in some of their best playing sequences in the away game against Barcelona earlier in the season. Instead, Matías Vecino and Borja Valero acted as the number eights either side of Marcelo Brozović. They did have Romelu Lukaku available though, who missed the match at the Nou Camp. In this game he partnered Lautaro Martínez up front, with the two beginning to form a formidable strike partnership. 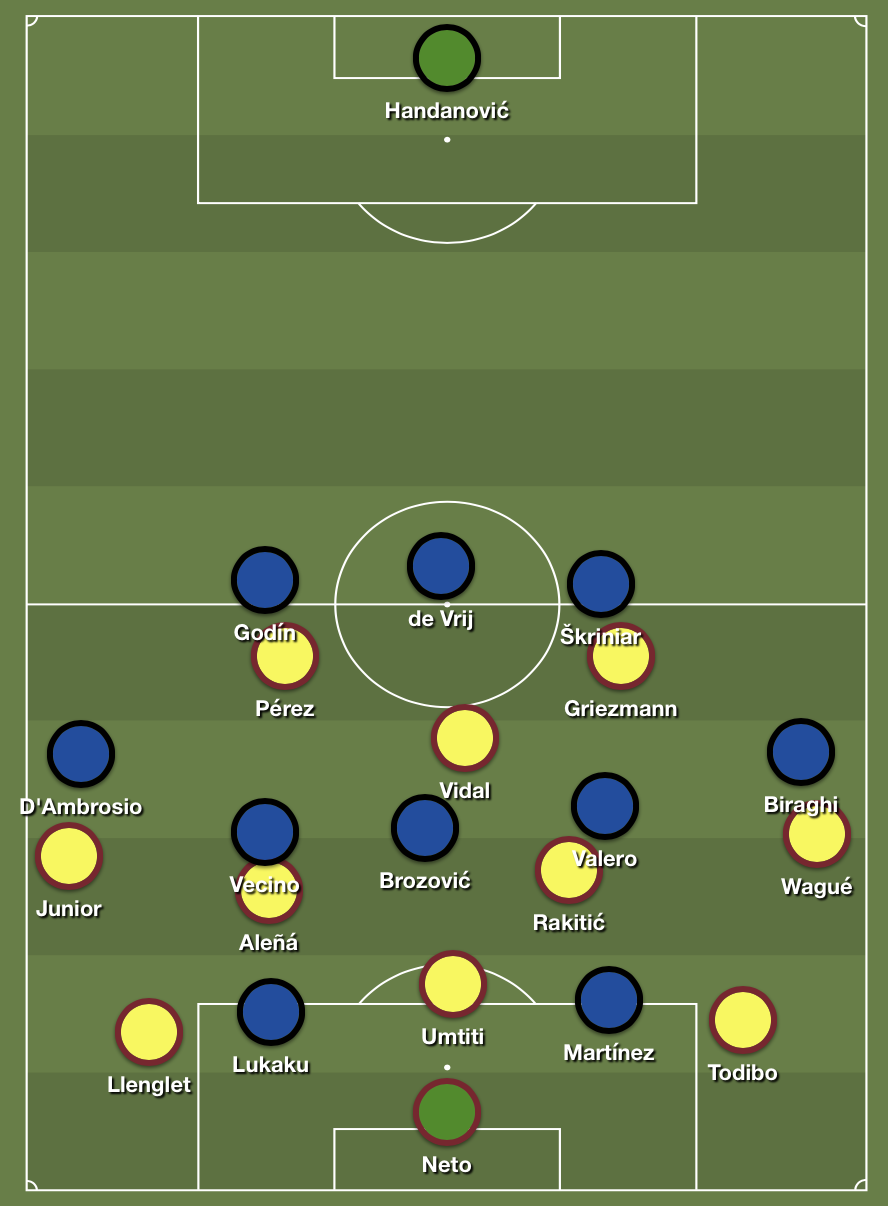 As usual, Barcelona attempted to construct attacks from playing out of the back situations deep in their own half. They built in the standard fashion with the wide center-backs falling to the sides of the penalty box, while Umtiti as the central player in defense took up position on the edge of the penalty box.

Barcelona’s midfield acted variably in possession. The starting structure was with Ivan Rakitić and Aleñá as a double pivot, 4-2-3-1 is one of the most frequently occurring formations in football. The two most defensive midfielders are called a ‘double pivot’. with Arturo Vidal acting as number ten in front of them. Frequently though, they formed a midfield three wherein Rakitić became the pivot, as Vidal and Aleñá pushed higher in the right and left halfspaces If you divide the field in five vertical lanes, the halfspaces are the lanes that are not on the wing and not in the center. Because there is no touchline like on the wing, players have the freedom to go everywhere. But this zone often is not as well-defended as the very center. This makes it a very valuable offensive zone to play in and a lot of chances are created by passes or dribbles from the halfspace. respectively.

To prevent the front two of Inter being easily outplayed by the back three of Barcelona in high pressing, one of the Inter midfielders – often Brozović – would find themselves pushing up onto Umtiti, forming a temporary 3-4-3 shape in pressing to try and win the ball back high in Barcelona’s half. 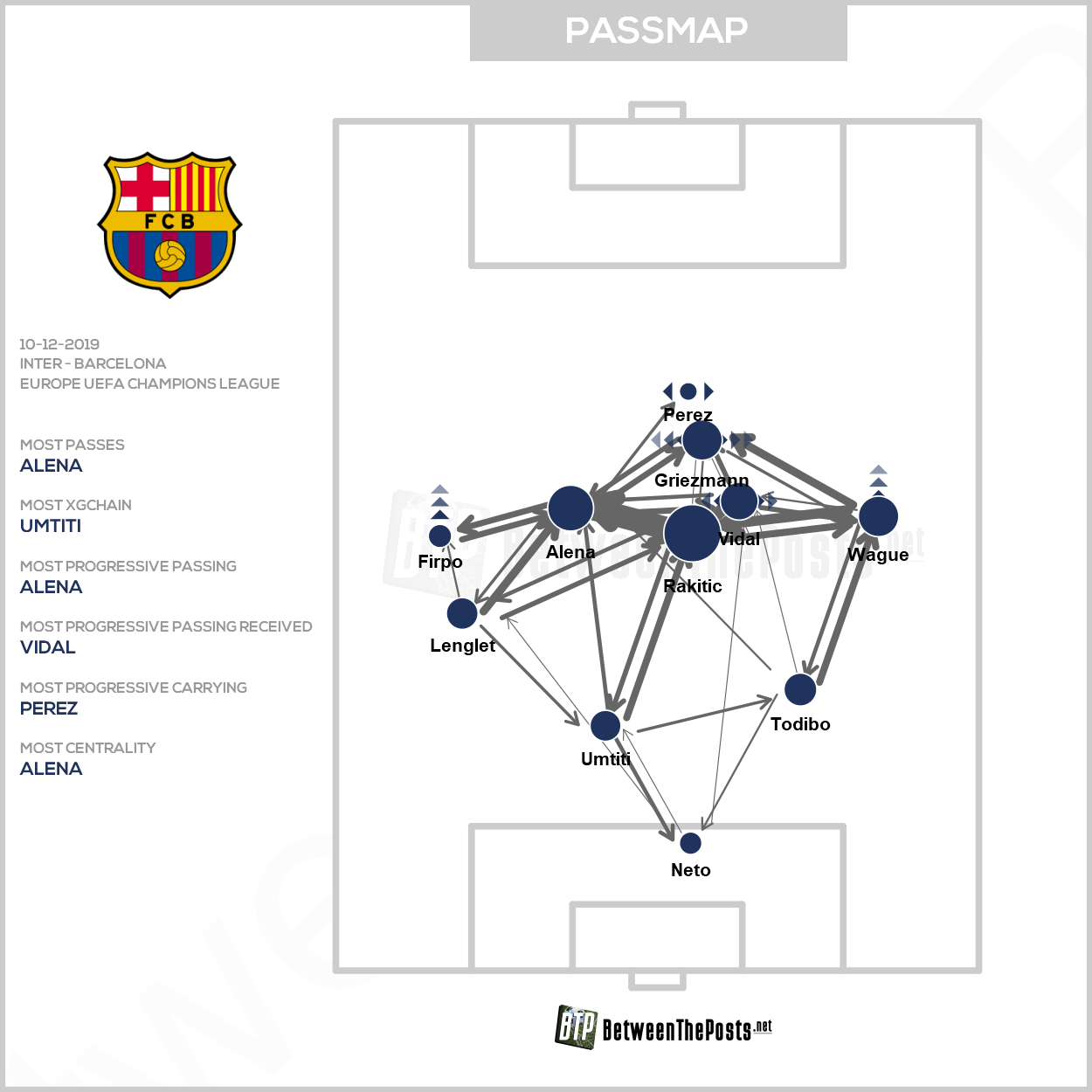 This had mixed success for Inter, as they did force some ball losses but could also be ably outplayed by Barcelona on some occasions. It was indeed an Inter high pressing moment which preceded Barcelona’s first goal.

Barcelona broke through the pressing with somewhat unorthodox means, as Todibo very confidently dribbled the ball out from defense in Barcelona’s half. Having bypassed Inter’s pressure, Barcelona had Inter retreating to their own third. Antoine Griezmann’s threaded pass in the direction of Vidal in the box ended up at the feet of Pérez at close range, who slotted past Samir Handanović to make it 1-0.

Despite their attempts at high pressing, which were seemingly most prominent early in the game, Inter were actually quite passive once Barcelona established possession in Inter’s half. Once this happened, Inter would usually sit back in their 5-3-2 defensive shape and not make strong attempts to jump up into higher pressing again.

As with many 5-3-2 systems, once the wing-backs are pinned by the opponent’s wide players, the spaces either side of the midfield three can become quite large. Barcelona could then use these spaces for ball retention and for preparing attacks from the halfspaces. 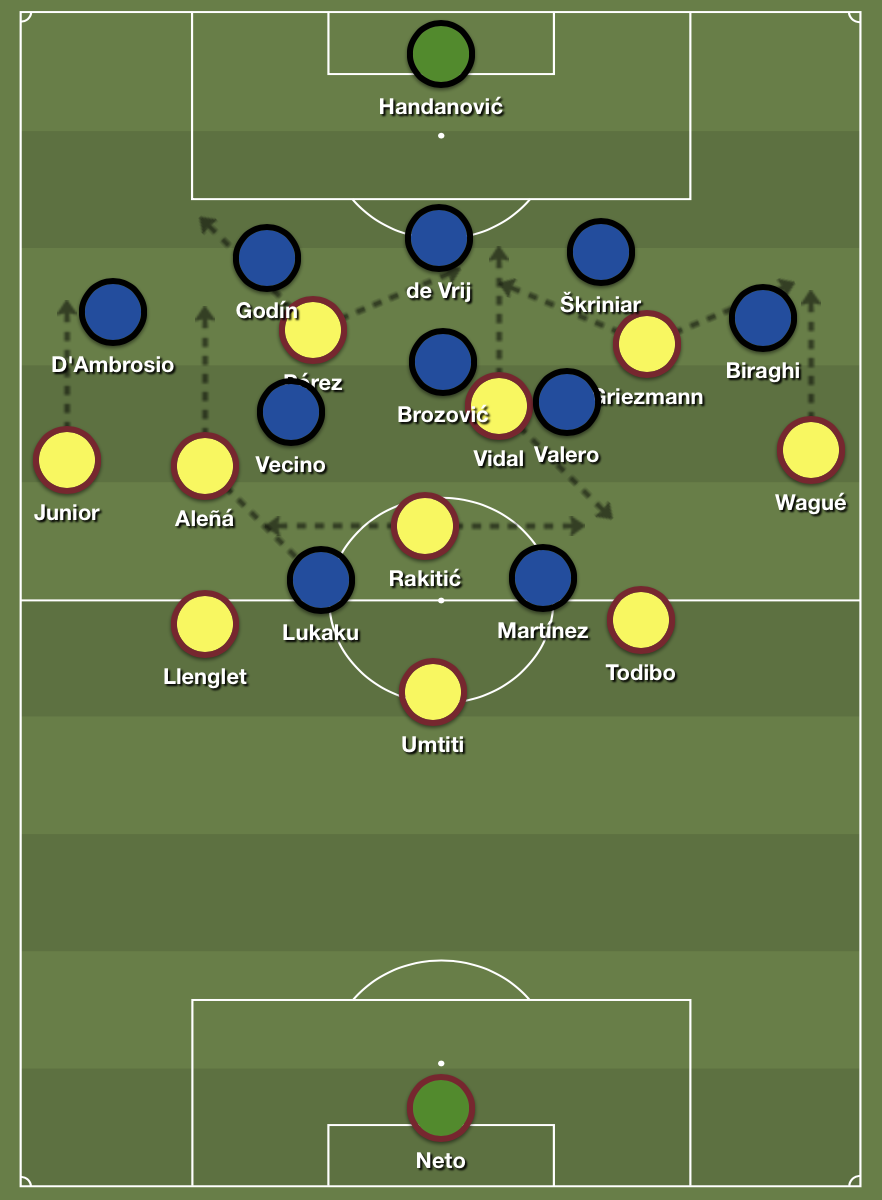 As mentioned, Vidal and Aleñá could occupy these zones as part of their variable midfield shape. This meant Rakitić moving into a central number six position, in which he was able to get on the ball and spread the play for Barcelona with relative ease.

Griezmann also made dropping movements predominantly in the right halfspace such as in the case of Barcelona’s first goal, while Pérez tended to stay a bit higher. There were some promising moments where Barcelona’s strikers, supported by the energetic forward bursts of Vidal, threatened to create some good one-touch combinations between the Inter defense and midfield lines.

Inter eventually got themselves an equalizer on the brink of half-time, which actually came after a sustained spell of Barcelona position where the away side seemed quite comfortable. Many of Inter’s attacks in this game were quite direct, as they generally sought to find the strikers in behind the Barcelona defense or play over the wings. 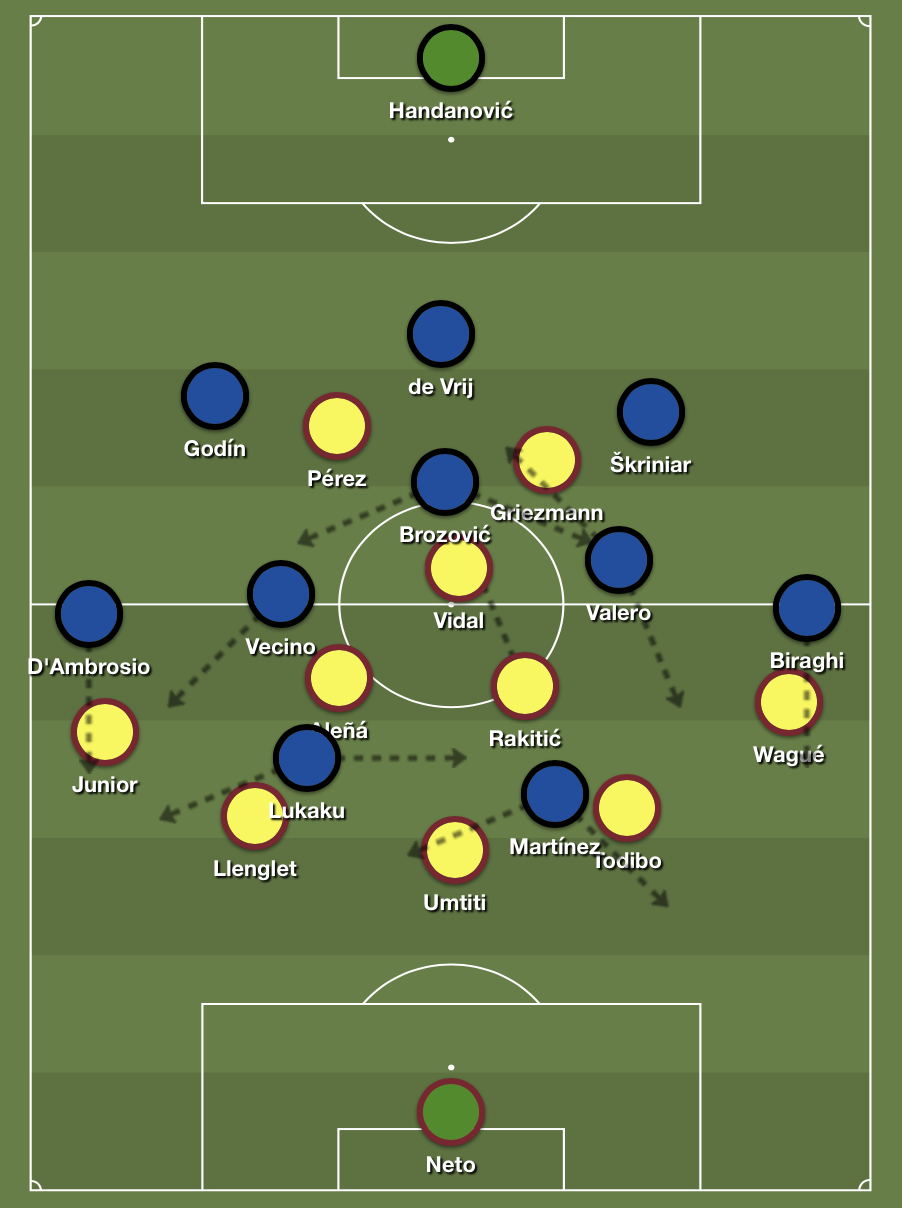 The goal was one such example. A long ball went up towards Martínez, who battled for it on the edge of the box with Todibo. Martínez was able to lay the ball off to Lukaku, and his well-controlled strike took a deflection and found the net low to Neto’s left.

Both managers went on to make personnel changes in the second half, but for different reasons. At around the hour mark, Rakitić and Griezmann were replaced by De Jong and Suárez. It is not unreasonable to assume that this was a pre-planned change to manage the playing time of the players involved, rather than anything tactical.

Going into the last twenty minutes needing a goal, Conte swapped both of his wing-backs for more arguably more attack-minded variants, as Valentino Lazaro and Matteo Politano took the places of Cristiano Biraghi and Danilo D’Ambrosio respectively.

They then went even more aggressive as Borja Valero was replaced by seventeen-year-old striker Sebastiano Esposito. Inter were now using a 3-4-3 formation with the front three predominantly playing on the last line, supported by Vecino who also roamed forward. This left the midfield looking rather empty at times as they desperately pushed for a winner, leaving Brozović to fend for himself.

As the game became stretched and spaces started to open up on the counterattack for Barcleona, Valverde’s final substitute was to bring on Ansu Fati for Pérez with five minutes of normal time to go. Just one minute after being introduced, Fati was able to score the winner. He combined with Suárez on the edge of the Inter box, receiving a lay-off from the Uruguayan which Fati was able to fire into the bottom corner with a first-time strike, leaving the final score at 2-1 for Barcelona. 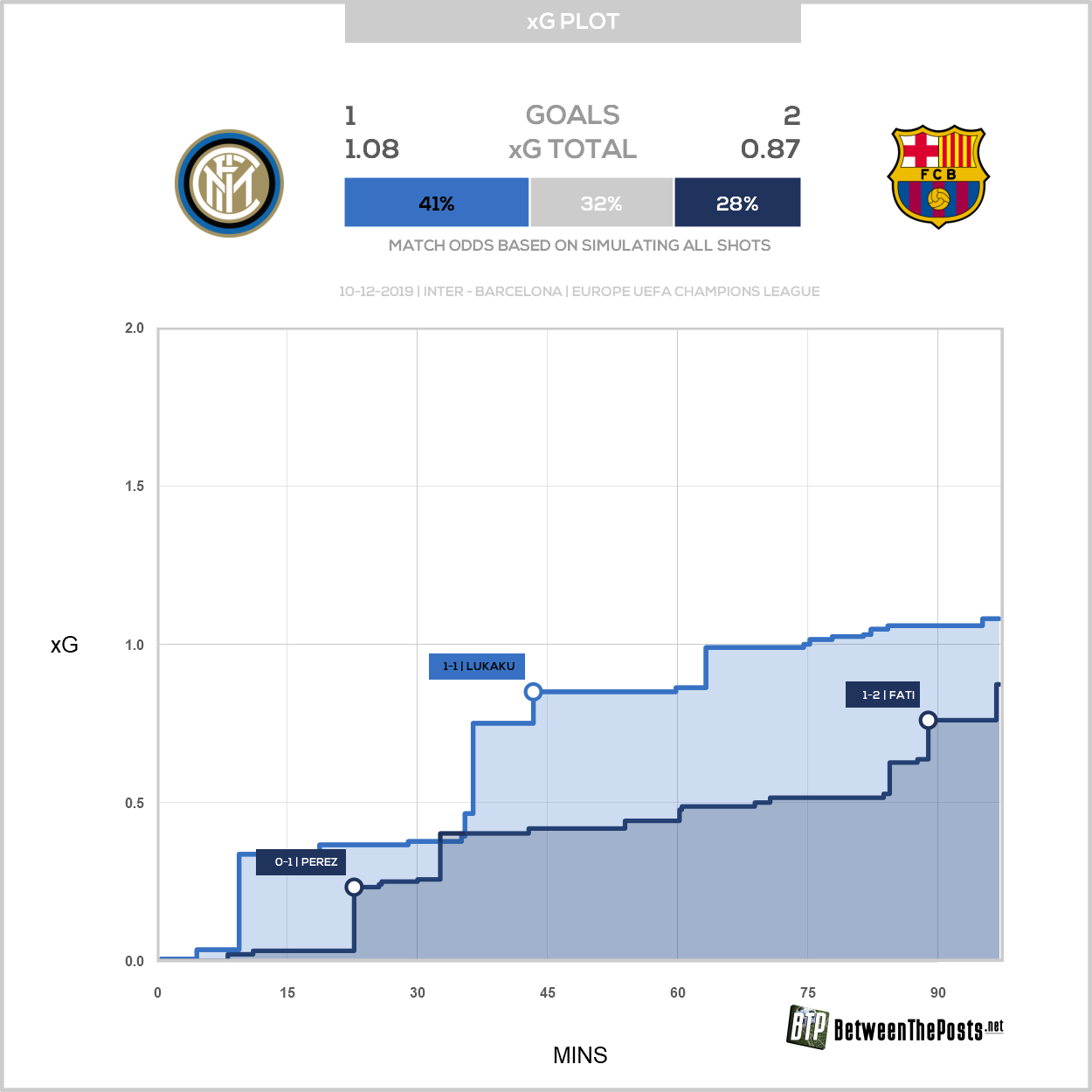 In many ways the game was relatively unimportant for Barcelona, since they were already guaranteed to top the group. However, the Champions League experience given to certain young players would have been at least somewhat valuable, and a win is always good for the momentum and confidence in the team.

Inter perhaps did not deserve a defeat, as they were ultimately able to create some decent chances against the Barcelona defense. Nevertheless, this result along with the one achieved by Dortmund means that Inter finish third in the group. Europa League knockout football therefore awaits them in the new year. With their strong position in Serie A though, one would imagine that their attention will now be firmly on a domestic title win since a Champions League run is off the table. 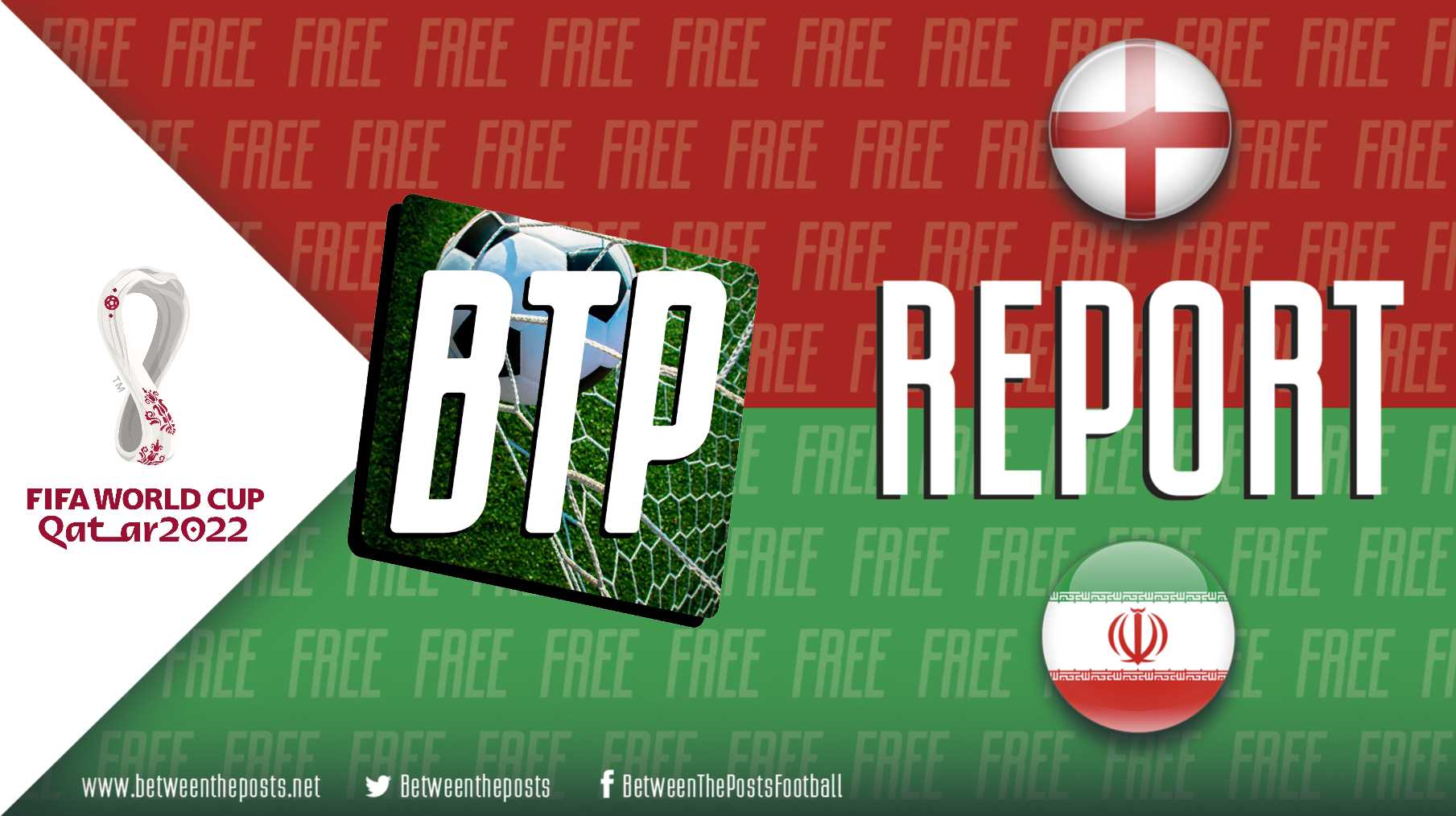