One of the most anticipated group stage matches when the World Cup draw was made was Iran vs USA, but when the day of the game came, its importance was much greater than anyone would have expected. Iran’s late win over Wales meant that this was a must-win match for the USA if they wished to stay in the tournament. They got the job done at the end of the day, but only after a very tense match.

With widespread protests against the government in their homeland over women’s rights and much more, this was a unique tournament for Iran. Both the players and fans were using this platform to highlight the situation in their country, which certainly has impacted the players’ psychology. On the pitch, they started off on the wrong side of a 6-2 thrashing at the hands of England but bounced back with a resilient 2-0 win over Wales that gave them the upper hand going into this fixture.

The USA were unbeaten in their two group matches, but their performances had been hot and cold. Their first half against Wales went well as they took the lead and looked in control, but the match flipped on its head in the second half and they could only come away with a point. Against England, their defensive setup proved almost unbreachable, so much so that they were arguably the better team on the night but again, a point was what they got. That left them behind Iran in the table, which made this a sort of knockout game in itself from their point of view.

Iran lined up in a 4-4-2 formation, with Alireza Beiranvand in goal behind a back line of Ramin Rezaein, Majid Hosseini, Morteza Pouraliganji and Milad Mohammadi. Ahmad Nourollahi and Saied Ezatolahi were in midfield whilst Ali Gholizadeh and Ehsan Haji Safi started on the flanks. Star strikers Sardar Azmoun and Mehdi Taremi joined forces up top again.

USA too did not change their shape from the last match. Matt Turner stood between the sticks, with Sergiño Dest, Cameron Carter-Vickers, Tim Ream and Antonee Robinson ahead of him. Tyler Adams had Yunus Musah and Weston McKennie for company in midfield, whilst Tim Weah, Joshua Sargent and Christian Pulisic.

Carlos Quieroz had set his Iran side up to defend in a 4-4-2 low block in both of their previous matches, so it was hardly a surprise to see them doing it again in a match where a draw would suffice. The USA knew what was coming, so they would have prepared a plan to break this defensive shape down.

The key they found was in midfield, where the USA leveraged their numerical advantage. Quite often, the ball-side midfielder would drop to one side of the center-backs in possession to create a sort of back three whilst the other would push forward. In other cases, Adams would drop in between the center-backs. Either way, the objective of creating this back three was that it gave the USA a numerical advantage in the first line against Iran’s front two. Beyond them, the fullbacks were asked to get forward, which meant that the wingers tucked into the halfspaces, where they made a lot of vertical movements to try and pull the Iranian defense apart.

Nominally, the USA’s shape in possession can be called a 2-3-5, but as discussed above, there were a lot of movements going on that could alter this. Overall, though, most of what we described showed up in their passmap. 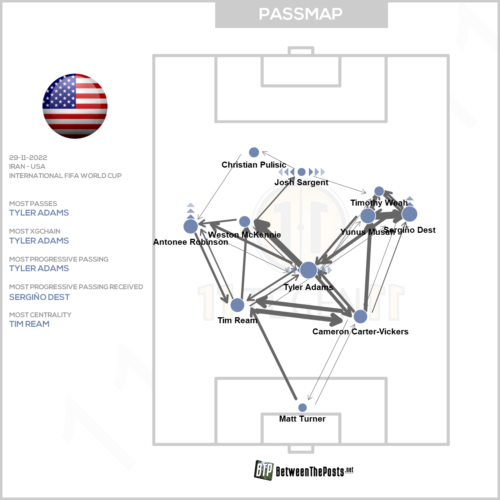 Since Iran defended in a low block, the USA spent most of the first half in the opposition half trying to break into the final third. They found a good deal of success playing crossfield switches into space out wide for the advancing fullbacks to run onto, and such passes were often made by one of the midfielders operating in a deeper area, where they found more time on the ball. This was exactly what led to the creation of the first goal, as McKennie found the run of Dest out wide, who then put it on a plate for Pulisic. 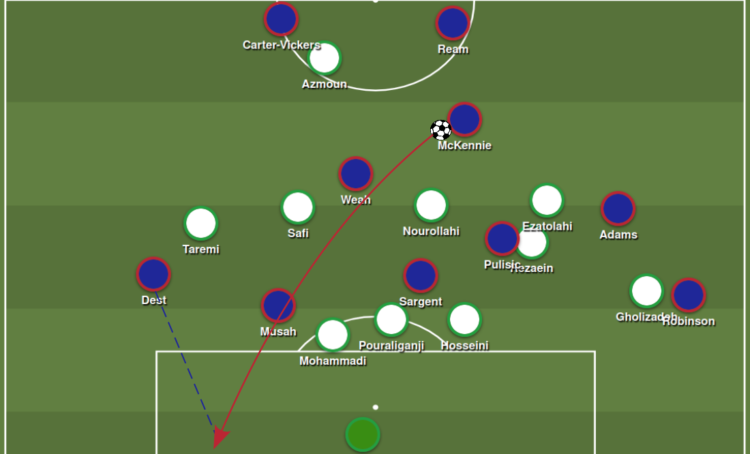 38th minute: McKennie finds the run of Dest in the buildup to the goal. Notice how Pulisic dropping back has pulled Rezaein out of position on the left, and on the right, Musah has pinned Mohammadi, keeping the space open for Dest to meet the pass.

At personal cost, Pulisic bundled the ball in to give his side a crucial lead. The tables turned then, as Iran suddenly needed at least one goal to stay in the tournament.

Iran ramp up the pressure in the second half, but the USA hold out

At half-time, Iran made a substitution to switch from their 4-4-2 formation to a 4-5-1 system, which, in theory, was supposed to work better in possession and allow them to pose a greater attacking threat. It started to work as planned right from the get-go, as Iran kept more of the ball in the second half and managed to get forward with a good deal of regularity too, especially down the flanks.

Their attacks almost exclusively ended with crosses, of which they attempted 16 in the match. They mostly did so from the right, with right back Rezaein delivering 7 such balls into the box. The USA defense dealt with these crosses quite well overall, but as the match wore on, their defensive line sunk deeper and deeper.

The possession stats do a good job of showing how Iran ramped up the pressure as the second half wore on. They had 60% of possession in the second half, 68% from the sixtieth minute and onwards, and 80% for the last fifteen minutes of regulation time plus stoppage time.

Gregg Berhalter made his side switch to a back five around the eightieth minute, and this extra body in the back line proved crucial in dealing with the constant Iranian pressure. Between them, the USA defenders made 16 clearances in the match, of which 5 came from the late substitutes.

The attacking threat timeline of this match shows how it was an archetypical game of two halves, but what matters most, in the end, is the final scoreline, which reads well for the USA.

It's two consecutive clean sheets for the US in the World Cup since 1930 and they progress to face the Netherlands in the last 16#FIFAWorldCup pic.twitter.com/41MxgcgUFW

This result marks the end of Iran’s World Cup campaign, as they have been eliminated in the group stage for the sixth time in six attempts. As aforementioned, though, the off-pitch background made this a very unique and difficult tournament for them, so all of the players should be proud of their performances and the fact that they were in with a chance to make the knockouts right till the end.

The USA missed out on the Men’s World Cup altogether in 2018, but in the previous two editions when they qualified, they did make it to the round of sixteen. They have managed to keep that streak going in Qatar, and deservedly so too because they quite clearly were the second-best side in Group A behind England. In their match against Gareth Southgate’s side, they showed that they could go toe to toe with one of the best sides in the competition, which is what they will need to repeat in their next match against the Netherlands if they are to have any chance of advancing further.