Italy’s streak of comfortable outings was put to a grinding halt as they were given their toughest test of EURO 2020. Franco Foda’s Austria side  strained the Italians early on with well-structured possessional control. And as Italy eventually grew into proceedings, the stubborn Austrian defense made Italy work extra-time to break through. Even then, Austria went down swinging causing a true clash till the final whistle.

Italy comfortably topped their group, having won all three fixtures. And Roberto Mancini’s group were aiming to continue their streak in the Round of Sixteen. Their opponents were an Austrian side who also impressed in their group-stage exploits. They finished clear in the second spot behind the Netherlands and would offer a stern test given their positive performances thus far.

Italy went out in a 4-3-3 formation by Mancini. Gianluigi Donnarumma was the goalkeeper with Leonardo Spinazzola, Francesco Acerbi, Leonardo Bonucci and Giovanni Di Lorenzo ahead of him. The midfield was made up of Jorginho, Nicolò Barella and Marco Verratti. The latter was chosen over tournament standout, Manuel Locatelli. The attacking three were Lorenzo Insigne, Ciro Immobile and Domenico Berardi.

Franco Foda lined the Austria side in a 4-2-3-1 formation with Daniel Bachmann in goal. The backline was Stefan Lainer, Aleksandar Dragović, Martin Hinteregger and David Alaba. Xaver Schlager and Florian Grillitsch were the stated double pivotDouble pivot – Two central midfielders next to each other. behind the trio of Christoph Baumgartner, Marcel Sabitzer and Konrad Laimer. Marko Arnautović led the line for the Austrians.

Early control by the Austrians

The opening dynamic saw Austria have the ball while Italy mainly searched for transition opportunities. Austria built up with Alaba and Lainer slightly high to provide an option of progressing out wide. Grillitsch was the single pivot who occasionally dropped into the defensive line. Austria would have up to five players in the attacking line with Schlager and Sabizter most often those to drop into midfield. And coming from the defensive line, this dragged Italy’s backline players while still leaving Austria with strong numbers in the frontline.

Austria was aggressive in attempting to find space behind the midfield of Italy. And the Italy press out of midfield also assisted Austria. Italy would send midfielders to press high as the wingers cut out the high fullbacks. The key being the ability of Italy’s midfielders to block the space they have just vacated. However, this was difficult given the numbers Austria had behind them dropping in and around them. Austria would attempt to access this vacated space using direct vertical balls, third-man combinations A passing combination between two players, while a third player simultaneously makes a run, usually in behind the opponent’s defensive line. After the initial combination, the ball is quickly played in depth for the third player to run onto. with dropping players or quickly progressing wide via the high fullbacks and out-to-in passes from those areas. 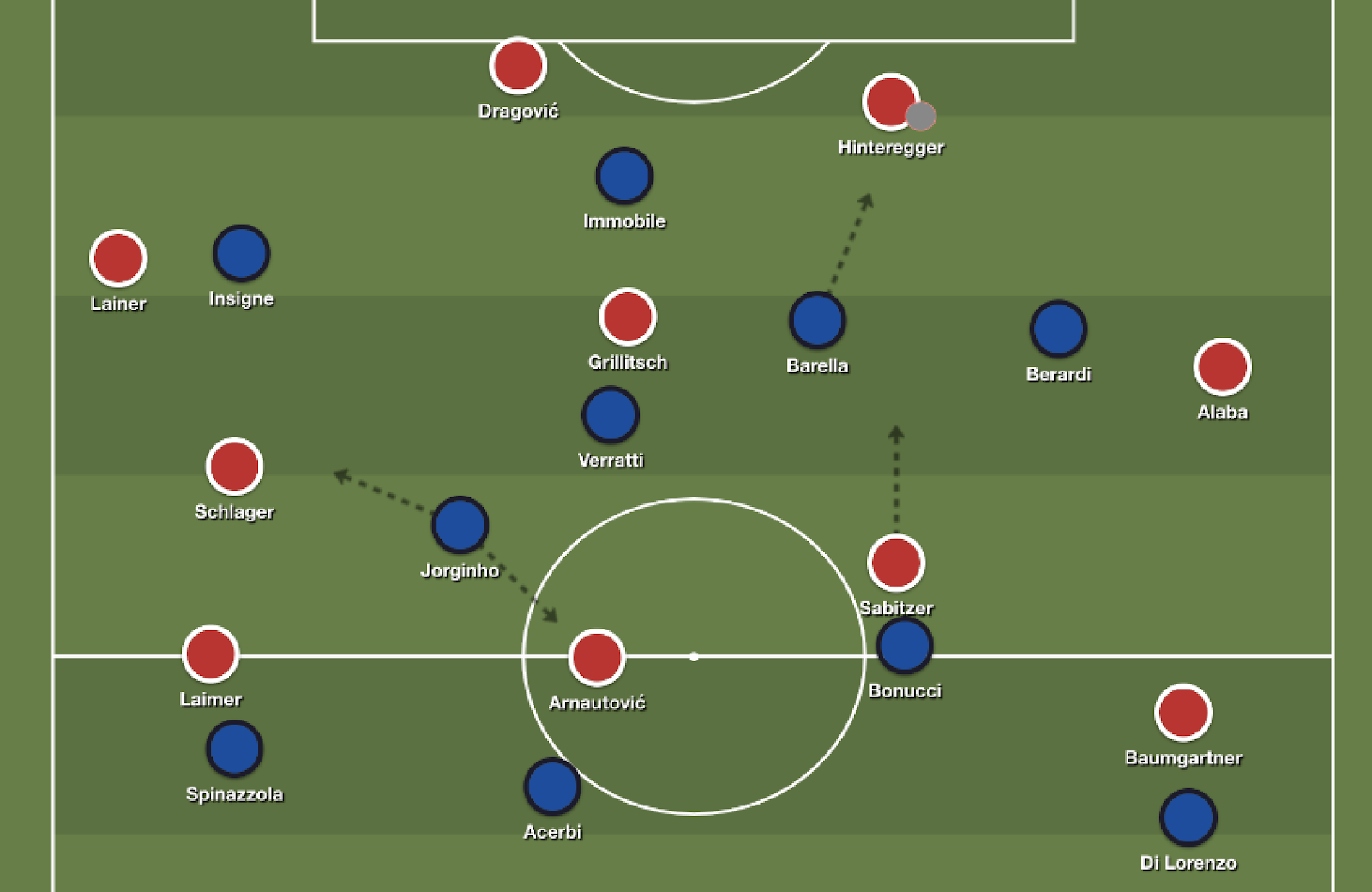 4th minute: Barella steps up as Sabitzer drops into the space behind him with Bonucci following. Hinteregger plays the ball to Sabitzer as Austria eventually work the ball towards Alaba.

Italy also struggled with the play out wide with Di Lorenzo and Spinazzola pinned deep by Baumgartner and Laimer. Thus, Insigne and Berardi had to balance assisting the press high and being able to challenge the high fullbacks. This contributed to situations of being outnumbered both centrally and out wide in the midfield area. Despite this early grip in the game and some threatening scenarios, Austria did not create much by way of concrete chances. 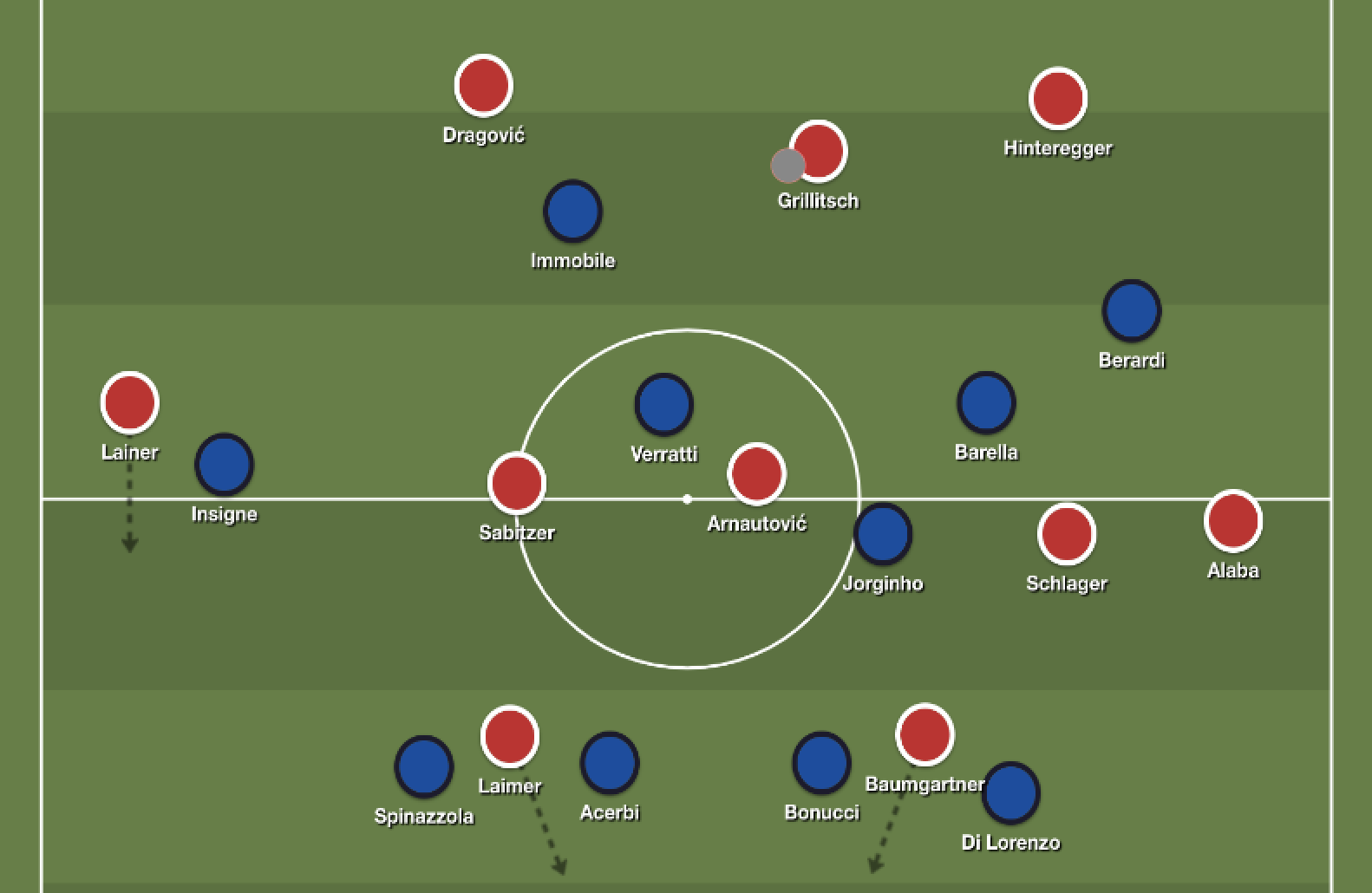 10th minute: An instance where Grillitsch is afforded time with Italy’s midfielders effectively pinned. He freely searches for a long ball towards Baumgartner going in behind.

Italy would operate from their usual 3-2-5 formation when building from deep with Spinazzola advancing. Laimer would often drop to either follow Spinazzola or monitor the halfspace If you divide the field in five vertical lanes, the halfspaces are the lanes that are not on the wing and not in the center. Because there is no touchline like on the wing, players have the freedom to go everywhere. But this zone often is not as well-defended as the very center. This makes it a very valuable offensive zone to play in and a lot of chances are created by passes or dribbles from the halfspace. where he still moved out to pressure Spinazzola. This allowed the right back, Lainer, to track Insigne’s movements more freely. This also helped prevent too many two-versus-one wide situations Italy created on their left side. Their defensive shape would resemble a 5-1-3-1 shape or an asymmetrical 4-2-3-1 shape depending on the depth of Laimer.

Schlager would step up on the right side to mirror Baumgartner. When the ball was on their respective side, they would step up to press while the other tucked in centrally. They used their cover shadows When a player is positioning himself between the opponent that has possession of the ball and another opponent, he is blocking the passing lane. When applied the right way, his ‘shadow’ is effectively taking the opponent in his back out of the game, because the pass can not be played. to block the halfspaces where Insigne and Barella frequented. Sabitzer and Grillitsch then marked the double pivot when in midfield, which made buildup tough for Italy early on. They often resorted to long balls as there were discouraging turnovers when deep. Verratti would regularly drop deep on the left to get on the ball. This left Schlager outnumbered and did lead to some instances of progression involving Acerbi moving forward behind Schlager or progressing directly to an advanced Spinazzola. 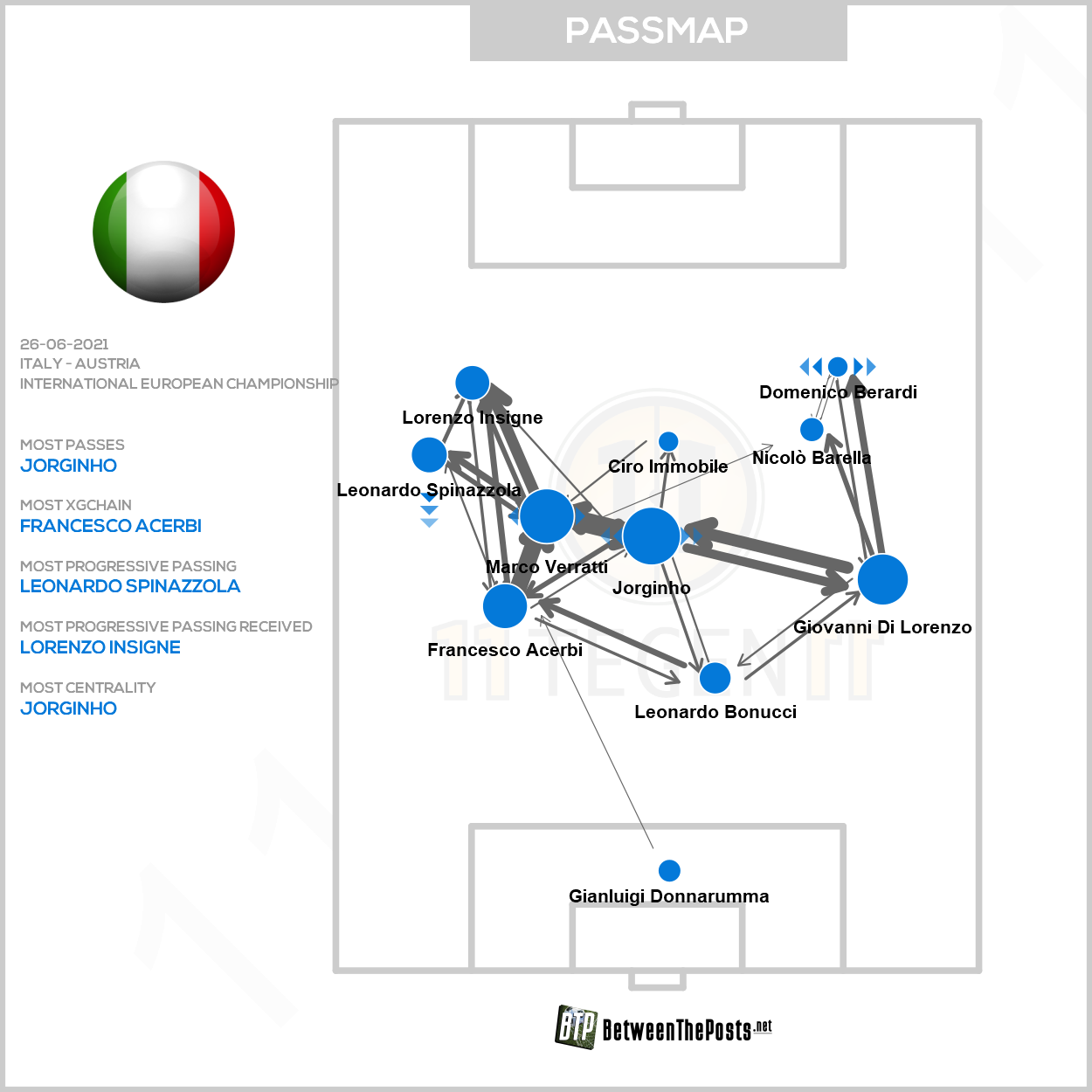 In addition to the usual focus of Spinazzola, Insigne and Verratti, Jorginho would also often be orientated to the left. This helped maintain control and much of the probing and progression as well as entries into the danger areas came from that side. Spinazzola, although not always beating his man, did bring the most evident threat. He also created the best chance around the quarter-of-an-hour mark as he ghosted past Lainer to cut back for Barella whose effort was saved. In contrast, the right side seemed less effective. The focus on the left did allow Italy to switch play A pass from one side to the other. to Berardi. And with Barella moving through the right halfspace, Berardi did have some opportunities to take on Alaba. This usually resulted in attempts to cut inside to either strike from range, combine centrally or cross diagonally. This did not work often and with Di Lorenzo regularly remaining deep, there was a lack of dynamism on the right side. 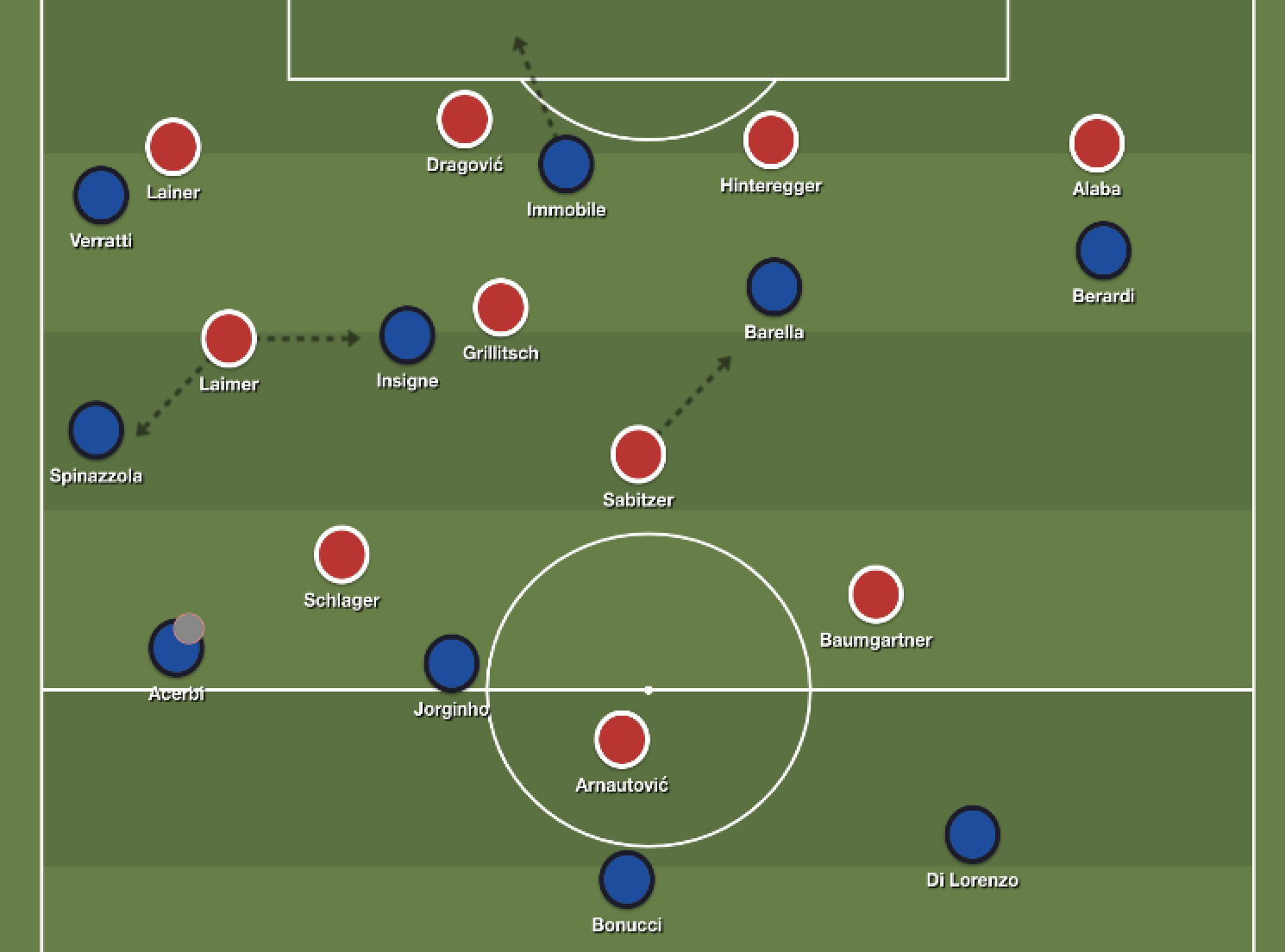 33rd minute: A variation of Italy’s left-sided structure with Verratti moving high and Acerbi driving forward. Acerbi was able to find Insigne in the halfspace who then attempted to quickly switch to Berardi.

As time went on, Italy gained some semblance of control on the game. And it was Austria’s turn to primarily operate on the counterattack with there being some threat from Arnautović. However, Italy came closest from a long-range Immobile strike around the half-hour mark as Austria made chance creation difficult given their many numbers behind the ball.

It was a generally sloppy start to the second half for both sides as they struggled to assert the same sort of sustained control they saw earlier. The tactical dynamics did not seem to shift much during the remainder of the clash. Indeed, the introduction of some substitutes, mainly by Mancini, brought different profiles. There seemed to be a slight change in Italy’s press with Immobile now blocking access to Grillitsch while Insigne and Berardi pressed high. It was the task of Verratti and Barella to press wide if the ball went to a fullback, otherwise they sured up the central areas alongside Jorginho. When they timed these presses wide well then Austria found trouble moving forward.

There were some notable moments as the game moved towards finding a winner. Austria thought they had a 66th-minute lead as Lainer lofted a cross to the back post where Alaba beat Di Lorenzo to head towards Arnautović. The striker then headed past Donnarumma but after a VAR check, he was deemed to have been offside as Alaba nodded towards him. For Italy, Spinazzola continued to look the best way forward, creating a few chances via crosses. However, the game slowed down late on and somewhat dragged into an extra thirty minutes of football.

Manuel Locatelli, Matteo Pessina, Andrea Belotti and Federico Chiesa would all be impactful substitutes for Italy. The latter would score the opener minutes after getting on. A great Locatelli pass from deep found Spinazzola in the left halfspace. Alaba was then dragged centrally by a Pessina run as the ball was switched to Chiesa. The Juventus winger poked past the recovering Laimer and finished past Bachmann. For their second, the ball was switched to the left with Insigne and Locatelli in a two-versus-one scenario. This allowed Insigne to cut in and play an incisive ball into the heart of the box. Chiesa managed to work the ball into the path of Pessina who then fired home.

Italy looked well on their way but Austria had an effective substitute of their own. Saša Kalajdžić, brought on for Arnautović, not only put in a lively cameo but also grabbed their only goal. He produced a savvy near-post header to sneak a corner delivery past Donnarumma. This would create a tense final five minutes which Italy managed to survive and progress to the next round. 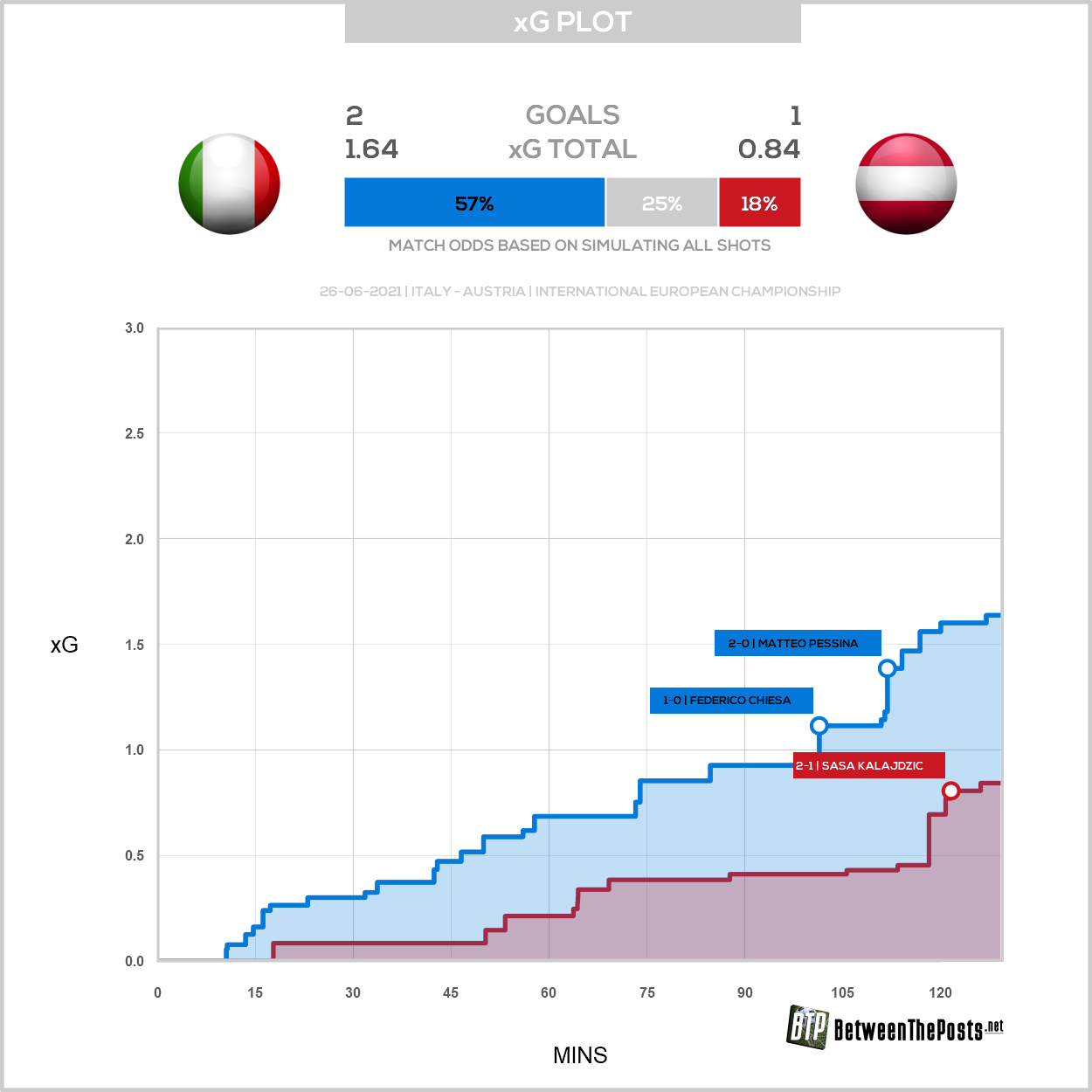 Austria produced a strong performance to push the Italians to the very end. Issues in the Italian press were their most evident all tournament and there glimpses into how to effectively press Mancini’s side. Despite this, Italy will walk away having been thoroughly tested in preparation for likely more difficult tasks on the horizon. And the impact of their substitutes will further add to potential solutions to any future troubles. Italy now await for the winner of the huge clash between Belgium and Portugal.

Poland – Italy: Italy Steals Victory At The Death With A Clever Set-Piece Routine (0-1) 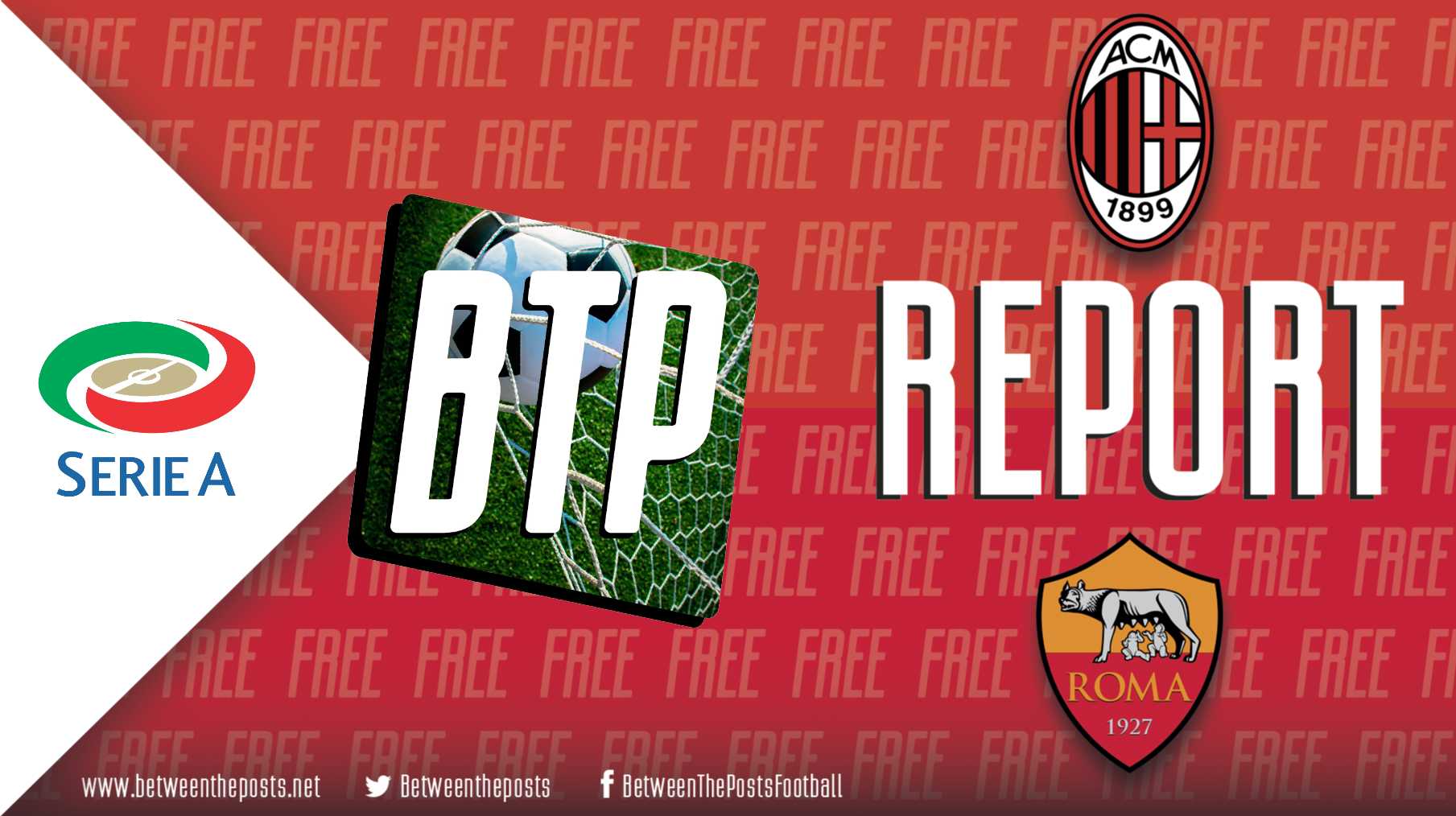