Italy – England: Tactical Final With Twists And Turns (1-1, 4-2 After Penalties)

Wembley Way, a fanatic home crowd, and an early goal seemed to put England on their way to banish the demons of the past. Alas, winning a game of football means being in the fight for the long haul, and the Italians pulled through to deal their opponents the cruelest of blows.

Coming into EURO 2020 as dark horses, Italy have exploded back onto the scene, lighting up the stage with a progressive style of play. Kicking off proceedings at the tournament with a 3-0 rout of Turkey, a clean sweep of six wins have put this outfit on the brink of glory. But if Roberto Mancini’s men have proven they can be an unstoppable force, their opposition have been an immovable object.

England under Gareth Southgate are still what they have always been: stable. Eschewing the clamor for an offensive spectacle, he has instead shored up his team’s backline. Hence, for all the criticism he engenders, the manager has guided his men to a first final in over 50 years, giving up a mere goal along the way. Now, back at Wembley, one last duel stood between this team and immortality.

Mancini set up his men in their usual 4-3-3 shape. Injury concerns around Federico Chiesa after he left the field against Spain last time out were the chief source of uncertainty over team news. In the end, the manager did start the right winger, naming an unchanged starting eleven from the semi-final.

From the other dugout, Southgate reverted to a 5-2-3 defensive shape. Thus, the manager made one change to the side that started against Denmark in the semi-final. Kieran Trippier returned to the fold in place of Bukayo Saka, playing on the right of the back five.

In light of the tactics used by England, we have to consider how important the score and game state is for the effectiveness of the plan they wish to implement. Trailing for a mere nine minutes in their games at the EUROs, conditions that do not force the side to take risks, allowing them to stay more stable, are ideal.

So England could hardly have made a better start to this clash. From an Italian corner, Luke Shaw beat pressure from Chiesa before finding Harry Kane. The striker swiveled to open up the field, shifting the play out to Trippier. On the edge of the box, the right wing-back then whipped a cross to the far post where Shaw crashed a volley into the back of the net. The Three Lions were roaring after two minutes.

Advantage England in the war of the wings

The momentum of the early goal carried into the next phase of the game as England posed issues to the Italian defense time and again. Kane, like Olmo, played a central role in progressing the play into the final third. The one-third of the pitch that is closest to the opposition’s goal. But the tactical interaction that defined Italy’s struggles in this phase was on the flanks.

Switching to a 3-4-3 shape from a 4-3-3 setup, Southgate put an extra man at the back. While the change’s intentions off the ball were evident, it also seemed to confuse the Italians defensively too. 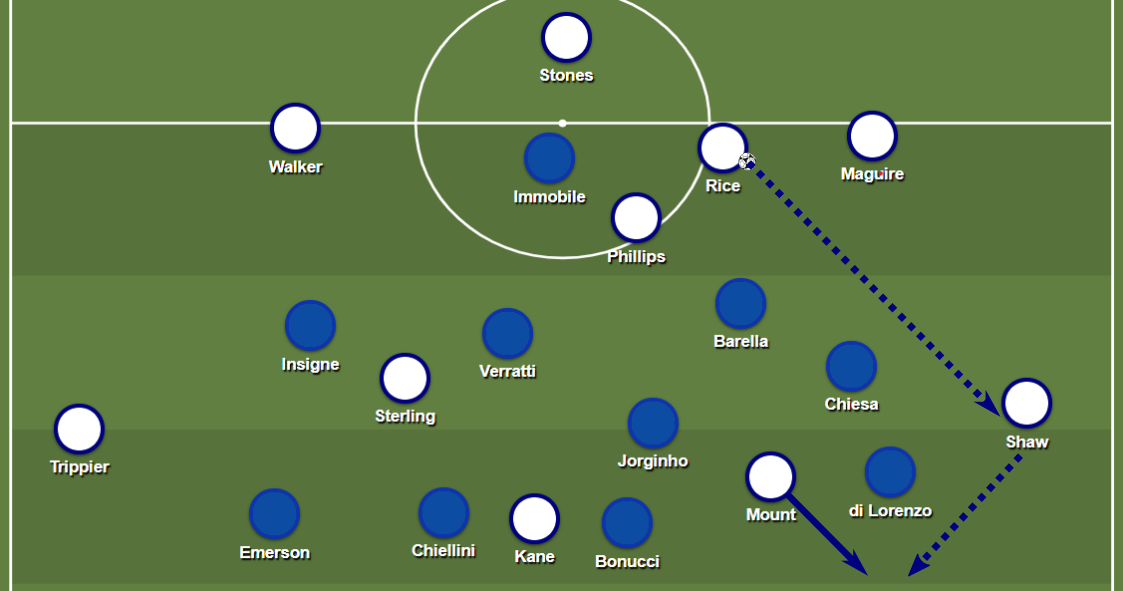 14th minute: England settle on the outside of Italy’s block, before Shaw finds Mount’s underlap.

Mancini’s men could not create access to the central defenders in time while closing down the center of the field. From here, the wide men ended up in no man’s land, retreating haphazardly, leaving the wing-backs as a continual outlet for England to hit. A structural advantage had manifested for Southgate’s men, but eventually, their strategic inclinations told.

A goal to the good, England invited the Italians to break down their 5-2-3 system. In the context of a clash of two top nations, they were in a neat position. Southgate’s men can not only fall back on many experiences defending more passively but also know they can cleanly execute this ploy.

On the ball, from their 4-3-3 shape, Italy rotated into their usual 3-2-4-1 offensive structure. Giovanni di Lorenzo stayed deep on the right side with the two central defenders to form a base of three at the back. Chiesa then stayed high and wide to his outside. On the left, fullback Emerson pushed up the flank, leaving Lorenzo Insigne to move inside. Thanks to these movements, Nicolò Barella played higher than Marco Verratti and Jorginho in the right halfspace, If you divide the field in five vertical lanes, the halfspaces are the lanes that are not on the wing and not in the center. Because there is no touchline like on the wing, players have the freedom to go everywhere. But this zone often is not as well-defended as the very center. This makes it a very valuable offensive zone to play in and a lot of chances are created by passes or dribbles from the halfspace. creating a box in the midfield.

Kalvin Phillips continually jumped out of the midfield line to close down Verratti, while the wingers dropped into a 5-4-1 defensive shape in the last fifteen minutes of the first half. But while England defended resolutely, the Italians were short of their best. A recurrent issue for Mancini’s men was the lack of smooth ball circulation. Line-breaking solutions did not arise much due to the deep positioning of the attackers and the ever-retreating nature of the English team.

But from here, players should have aimed to keep the ball until men got into more advanced positions, moving the block around with dynamic passing sequences. Their impatience to look for options deep or on the far side from the ball was proving costly. Italy faced this issue against the Turks in the group stages but adjusted and modified their approach well to win. Would the same happen here?

Chiesa the positive exception with his dribbling; he’s also the only Italy player to not have received a minimum of five passes from a team mate. pic.twitter.com/UilTd6Grj0

Mancini made two changes to the side quickly in the second half, one of which saw Immobile come off for Domenico Berardi. Chiesa then switched flanks to the left, pushing Insigne to the middle of the front three. As a result of this substitution, Mancini’s men now played without a nominal striker. Removing a fixed reference point at the head at the attack, the structure of the Italians looked far sharper from this point onward.

62nd minute: one of Italy’s offensive mechanisms. If Insigne pulls wide, Berardi can shift over from the right to exploit the vacant halfspace.

More of the play came between the lines, Emerson bombed higher up the left flank, and Insigne found ideal moments to pull out into broader positions. The conservative attitude of the English persisted, but as their opponents grew with every attack, they could not flip the switch. Chiesa let fly just after the hour mark from close range, drawing a desperate clearance from Harry Maguire moments later.

This attack saw England give away a corner. As the delivery worked its way to the far side, Jordan Pickford dived to his right, palming Verratti’s headed effort onto the post. But Bonucci was vigilant, slotting home the rebound. The equalizer was reflective of the state of affairs: Italy had restored order.

Saka replaced Trippier, leading to a switch of shape. England went back to a 4-3-3 system, where the substitute played on the right wing. But this adjustment did little to shift the momentum of the contest. Above all, there was little to no respite for England from defending. Italy’s base of five at the back outnumbered Kane, who faced two rugged center-back making his task of holding up long balls even harder. The stalemate remained at ninety minutes, but the one-way traffic was cause for consternation.

Both managers made changes in extra time. Jack Grealish replaced Mason Mount, offering some relief with his innate ability to draw fouls. On the other side, Andrea Belotti allowed Italy to find lay-off combinations between the lines. But neither side scored again, leaving the final to go to penalties.

The ghosts of shootouts past reappear

As the shootout loomed near, Marcus Rashford and Jadon Sancho both came onto the field. Southgate had a plan of action, looking to the pair of attackers to make a decisive impact. Six penalties down, the two teams were level, leaving the former to step up.

Rashford stuttered and delayed, beating Gianluigi Donnarumma only to hit the post. To make matters worse, Sancho missed too, handing Jorginho the chance to seal the title. Pickford played his part by denying the midfielder, handing England the chance of a lifeline for Saka to take. But football is a cruel game. Donnarumma denied the young winger too, bringing the trophy to Rome, not home.

England’s biggest chance was created in the second minute.

After that… Not a lot happened. pic.twitter.com/cgIqO0d4AD

Forza Italia! As a phoenix from the ashes, Italy’s revival is now complete. At the heart of their success was the work of Roberto Mancini. Not only did he craft a system for his players to thrive, but he also made effective tweaks to his side across the tournament. This title is more than deserved.

Assessing this result should always keep outcome bias in mind. It is easy to criticize Southgate after the fact, as he could not guide England over the hurdle he fell over 25 years ago. Questions will arise over his management of the game as a whole, but the future for this side is still positive. This is a unit on the up, and they should relish their chances at the World Cup. 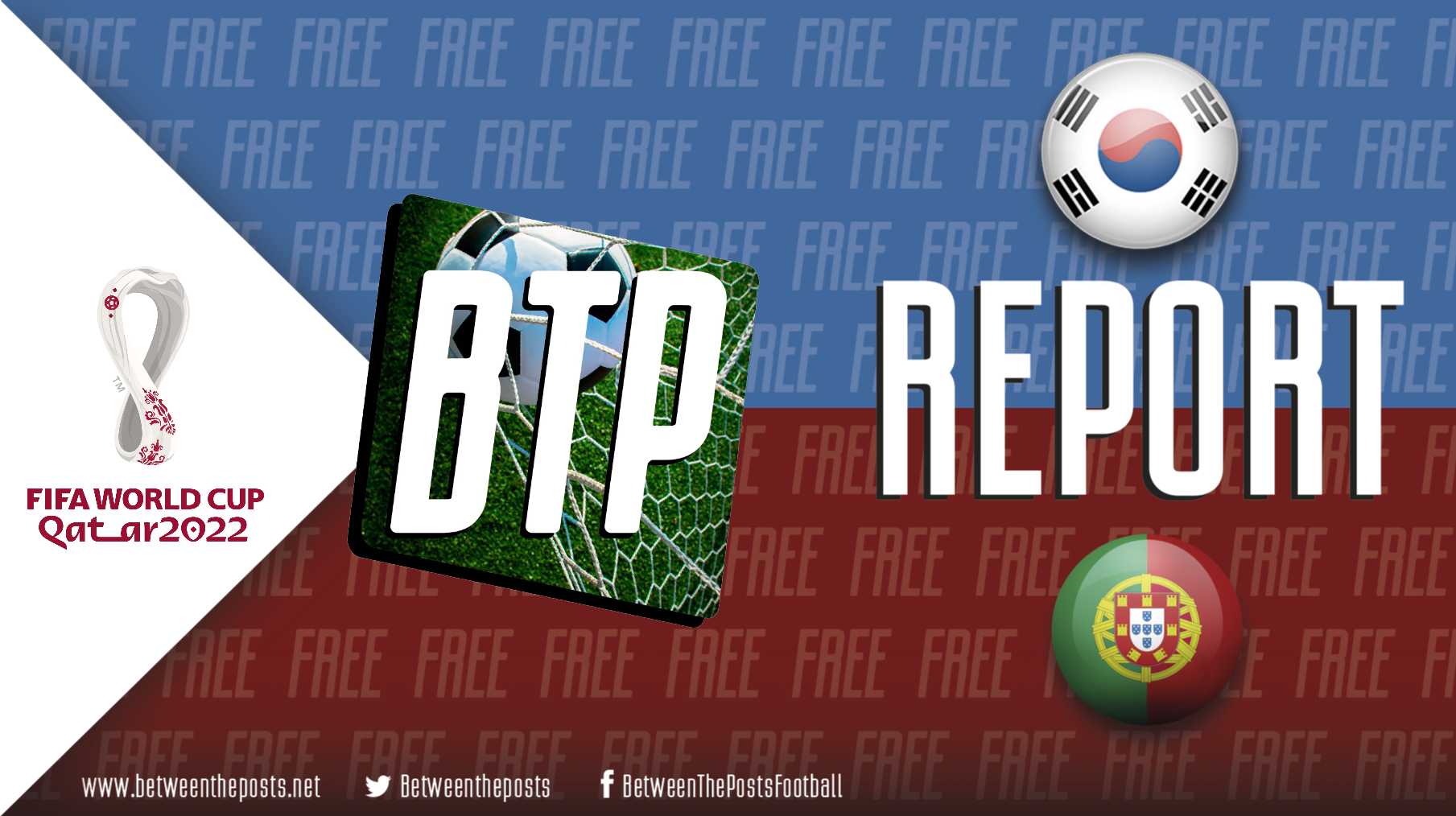