Ahead of kickoff, the odds were firmly on a German victory. In the end, the contest did not align with what many expected. Hansi Flick’s men might have startled their youthful hosts but soon ran into several problems to which their individual quality could not find solutions.

Italian ignominy seemed to have ended thanks to their triumph at EURO 2020, but staying at the summit has proven a trickier task. Pangs of playoff pain paved the way to the same fate that befell the Azzurri in 2017, no longer able to harbor ambitions of global glory in Qatar at the end of this year. Roberto Mancini’s renaissance rested in making the most of the star names he inherited at the outset of his tenure. He must now summon the strength to usher in a second wind suitable for this deck.

The Germans are keen to trigger their own national reboot. Joachim Löw’s exit last summer stressed the caution of an outfit whose tame displays were a disservice to their talent. No more should that be the case with Hansi Flick. The treble winning Bavarians set the tone for his 18 months in Munich, where brutal intensity and success went hand in hand. The embryonic stages of their development offer a reason for optimism, but standards remain high as the World Cup comes into the rear view.

Mancini’s men sought to bounce back from a 3-0 loss at the hands of Argentina in Finalissima. Only Gianluigi Donnarumma held onto his spot in the lineup. Giorgio Chiellini had made his final start for his nation four days ago, so Alessandro Bastoni started next to Francesco Acerbi at the back. On the other hand, Davide Frattesi made his debut for the Azzurri in the middle of the park. Club teammate at Sassuolo, Gianluca Scamacca, led the line off the back of a cameo from the bench last time out.

Conversely, the visitors arrived in Bologna fresh. So, Flick went for a much more standard starting eleven. Serge Gnabry featured as the right winger, while Thomas Müller was the number ten on the shoulder of Timo Werner. Off the back of a 1-1 draw with the Dutch in March, Nico Schlotterbeck dropped to the bench to make way for Niklas Süle. Flick also relied on a familiar partnership in the middle of the park. Joshua Kimmich and Leon Goretzka replaced Ilkay Gündogan and Jamal Musiala.

Germany began the game on the front foot, keeping 68% of the ball in the opening 15 minutes. Their aggression, intensity, and defensive flexibility have stood out in Flick’s brief tenure at the helm. Like in their trip to Amsterdam, the guests were in their ascendancy thanks to prudent work off the ball.

11th minute: pressing sequence from Germany. Werner moves out to Acerbi, curving his movement as a pass shifts the play laterally to Donnarumma. This buildup tendency from the Italians let Leroy Sané stay deep as a free man in the front four. Gnabry watches for Bastoni, while Müller maintains tight man-oriented coverage on Cristante, forcing a long ball and ensuing aerial duel that Süle wins.

Flick’s men operated in a 4-2-3-1 pressing shape. The double pivot in midfield shifted compactly to the side of the ball, where a fullback might push higher if more cover in traps on the flanks were in need. Gnabry and Werner often closed down the central defenders in an arcuate manner from outside, while Müller could push out a bit further to take care of Bryan Cristante if he dropped slightly deeper. Scamacca ended up dropping off to support the retention of the ball, but it was simply to no avail. The indomitable physical presence of Antonio Rüdiger snuffed him out, asserting German superiority.

Rustiness in the German machine

Once the Germans got a hold of the ball, they turned to a usual asymmetry. Thilo Kehrer stayed much deeper on the left flank, whereas Benjamin Henrichs moved higher on the right. Gnabry then roamed into the halfspace far more than Sané, keen to drive diagonally at the goal with runs and ball carries. He was the brightest solo spark, while his teammates kept initiating vertical combinations through the center of the pitch, with Werner acting as a third man runner in depth if they cleanly broke the lines. 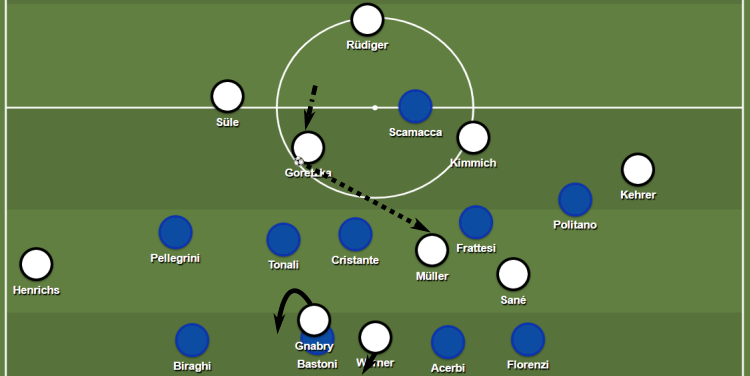 2nd minute: offensive sequence from Germany. Goretzka dribbles with the ball, luring Sandro Tonali from the midfield line. Cristante shifts across to cover, opening the progressive lane into the path of Müller. Gnabry’s supporting move off the front creates space to find Werner, but Bastoni intercepts.

However, the guests did not manage to turn their dominance into relentless pressure on Italy’s goal. Instead, their momentum ground to a halt after the opening quarter of an hour. The Azzurri began to find joy from an asymmetric 4-3-3 pressing structure where Pellegrini often helped Scamacca shut down the first line of the German buildup structure. Marking in the middle of the park, and cover from Acerbi in the back of Werner, flipped the script. Now, save a few swift sequences, Flick’s men also labored to escape cleanly from a high pressing scheme for most of what remained of the half.

Matters did not improve after the break. Germany did not engineer a shot before the hour mark, while the Italians grew more confident. Scamacca spurned a headed chance from a delivery from Matteo Politano and nearly slipped a through ball to Tonali in the penalty area. But for all the smart work of the forward, he was short of the mark in the final third. The home team required renewed impetus.

Mancini made his first change of the game in the 65th minute. Politano came off for Wilfried Gnonto. On his debut for Italy, the right winger was prompt to make his mark. As the final 20 minutes of the match neared, he drove past Kehrer before drilling a cross along the face of the box. Manuel Neuer edged away from the goal line, and Süle covered Scamacca, but Pellegrini struck, tapping home to put the hosts in the lead. This youthful outfit were on the verge of a perfect start to the Nations League.

Alas, the naivety of Mancini’s men turned out to be costly. Flick brought on fresh legs to freshen up his side. Jonas Hofmann replaced Henrichs on the right of the back four, while Musiala flanked attacking midfielder Kai Havertz to his left. In the 73rd minute, Werner’s threaded through ball to his Chelsea teammate missed its mark, but Hofmann picked up the pieces to steer the visitors into the penalty area. Kimmich followed up the siege, beating Donnarumma to restore parity on the scoreline.

Despite the setback, Mancini entrusted youthful debutants from the bench to see out the match. By contrast, Flick pushed for all three points. Left back David Raum came in for Gnabry, Hofmann moved ahead of Kehrer on the right flank, and Gündogan sat next to Kimmich, instituting more control on behalf of the Germans. Unfortunately, no onslaught followed. 1-1 at full time.

Mancini will draw courage from this draw. While the manner of the equalizer was frustrating, he was well aware, through his press conference after the final whistle, of the inexperience of this team. It is to the future the Italians must look. EURO 2024 is the next tournament they can enter, so a long road awaits the Azzurri in their quest to return to the summit of international football. Till then, fresh blood in the squad will strive to learn from the error of their ways— beginning with the visit of Hungary.

A second draw in a row will annoy Flick, whose selection of a first choice starting eleven did not tilt the tie in favor of the Germans. Much like the fixture with the Dutch in March, a less extreme yet still high tempo interpretation of the pressing Flick employed at Bayern Munich has been fruitful. Ahead of the World Cup, to have such high shares of possession against two top European countries, thanks to their work off the ball, demonstrates how they will want to impose their will upon others. It will be imperative to seize the initiative in the final third, but time is on the side of the Germans to improve. 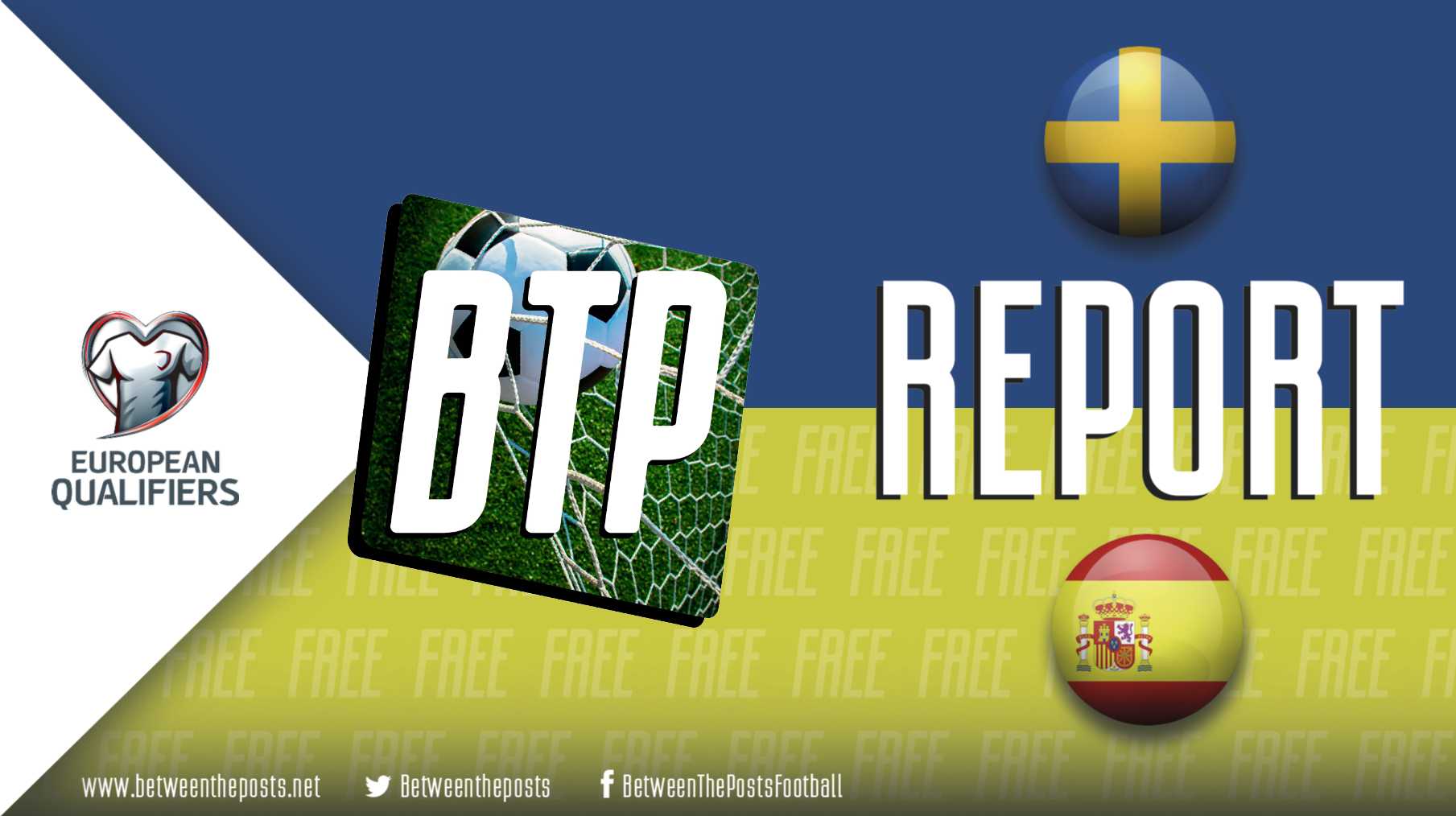